There and Back Again

Trip Introduction:
We were planning on going to Pine from Crab and back to Cummings but...

Sunday, June 24, 2007 A pretty easy day overall. We waited around for the last person of our group to show up Sunday morning until 11:00. Our ire was up, little did we know how valuable he would prove... Got on Burntside finally at about 1:00. Got to the portage after an hour(we were confused about where the public access was on the map). For the second year in a row I have not done the food shopping, so unlike the year before where we didn't have enough, this year we had way too much. On the mile and a quarter entry, I carried the food pack, which weighed at least 100 lbs., I made it 3/4 of the way and had to put it down. Had I known that I was almost at the top of the hill... It took our group almost 3 hours to do the portage to Crab. Needless to say, we were ready for camp. My wife and I checked out the first campsite south of the entry, thought that it was nice but was only big enough for 2 tents. The first site to the north is a beautiful site with enough room for 4 tents, which we had with 2 singles. We enjoyed steaks the first night and discovered a new treat. Take a pita and coat it with olive oil and garlic and grill it on the fire grate.

Monday, June 25, 2007 The portage into Crab kicked our a$$=$ so we had a hard time waking up. Got up at about 9 and decided to do a little fishing. Now Gus the dog doesn't normally go after lures, but when my wife pulled up a stick he dicided to try it out! We spent the next (what semmed like an hour) struggling with Gus to get the hook out of his tongue. It took two people to hold his body and three to hold his jaw open and grab the TREBLE hook with a pliers to rip it out of his tongue. I know that there have been more traumatic experiences in peoples lives, but at the time it was happening, everybody was shaking and the people holding the jaw had numerous puncture wounds. Everybody was OK, but we decided to stay another night on Crab. Had pesto pasta with bagged chicken and pine nuts. Cocktails and diapers all around.

Tuesday, June 26, 2007 Decided to go to Cummings. Went to Little Crab to the Korb river, through Korb Lake to the first island site on Cummings. One of the most beautiful campsites in the BWCA. On the way we had to sit through a two hour downpour on the Korb river, but after that the night was great. We planned on going as far as we could towards Pine Lake the next day, but it doesn't always work out that way. I think that this is a good time to praise the virtues of having a bartender with you. Although he got up late every day, he was always gungho to stoke the fire and make the tasiest cocktails every night.

Wednesday, June 27, 2007 The wind had really picked up during the night. It was coming staight from the west and that didn't bode well for us. We decided to change our plans and head back to Little Crab and go as far as we could west.  When we got to Little Crab and took the unnamed creek to Lunetta, we were hoping the campsite was nice... Not the case. Nobody has been to the compsite on Lunetta in years, (at least tried to clean it up.) We went back to Little Crab at stayed at a very nice site.h

Thursday, June 28, 2007 We got up late as usual (#%!@ bartender). Our first task was to head back to Lunetta on the creek we had done the day before. It is a lovely creek with many lillies and lotuses, the best kind of river paddling. From Lunetta we went south to Hassel on the 280 rd. I have never been on such an unkept portage. There were three places where I had to set the canoe down and drag it underneath a downed tree, (not to mention the ten step overs). This was actually great forshadowing for the rest of our trip. We saw two groups while we were camped on Crab and saw some people having lunch at the site that we stayed on Little Crab. These were to be the only people we saw during our trip. From Hassel we went to Battle and then to Phantom and on to Boulder. While the site on Boulder looked as thoug it hadn't been occupied in years, we made it home. It was very hard to fit our four tents at the Boulder site, but we did it. There is really only room for two tents. I like nothing better than getting to design the seating around the fire grate.

Friday, June 29, 2007 From Boulder we went back to Phantom to Sprite to Meat lake. My plan was to eat the rest of our jerky on Meat but we didn't do it. The water level was really low on Meat so it added another 50 rods to get to Clark.

The portage from Clark back to Crab has to be one of the most beautiful portages I have ever seen. 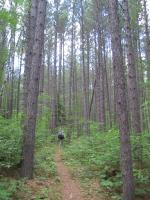 We decide to take the first campsite on Crab that looked good.

Saturday, June 30, 2007 From our site on Crab it seemed like an easy out. It was for the most part. The paddle across Crab was easy, the portage to Burntside only took an hour versus almost thrre on the way in. The paddle across Burntside was the hardest part of the day, only because of the boaters, (those $@&$*!!*@(*). We had to paddle into their wakes at least ten times.

When we got back to the landing, we talked to the first people we had talked to in week. The route we ended up taking was the most isolated I have ever felt in the BWCA. We were apprehensive gonig in, but ended up having one of the best trips ever.