Trip Introduction:
I needed a vacation after tax season ended (I'm an accountant). Since we had such great weather for being April, my wife and I decided to take a short trip to Lac La Croix.

We left the little one at Grandma and Grandpa's for the weekend. We got up at 4:15 AM and drove to our entry point (EP #16 - Moose River North). On the Echo Trail we saw a moose, which was a good start to our trip.

We stopped at "Top of the World" to hike it for the first time. We both thought the view was spectacular.

Auralee at "Top of the World"

I could see white caps on Nina Moose from the top, so I knew it may be rough going. I was right. Once we hit the lake, we had to paddle for all we were worth. We made just a few inches on each paddle, and on the gusts, it was all we could do just to stay in place. We eventually got across, though, and were thankful to be back on the river.

We saw a soloist at the next portage. He said that he hadn't expected to have to share this area with us, and I could say the same. He was on his way to Oyster, while we were going to LLC, so we eventually parted ways.

Taking a break after a portage

Knowing what the wind was like on Nina Moose, we weren't sure if we would be able to get across Agnes. We stopped at the campsite by the Oyster Lake portage to have lunch and discuss what we should do. It was a much needed break, and after eating we decided we were up to trying to get across.

Even sticking to the western shore was tough. If we got more than a few feet away from the shore, the wind would try to drive us to the middle of the lake (where we really did not want to be).

We eventually made it across. We were both starting to get tired, but we didn't have too much further to go. The first portage was uneventful other than the canoe getting blown 180 degrees at the end of the portage when the wind caught it. The pond/bay between the two portages was pure white caps, though. It was hard just to get away from the portage, and then I thought we would be crushed up against the rocks on shore. I didn't time how long it took us to get across, but it was too long.

Our first view of LLC was not comforting. We decided that we could only make it to the first campsite across the bay, so we hoped that it was nice. The wind had died down (a little) for the moment, so the first stretch wasn't as bad as Nina Moose and Agnes. However, when we were just a few yards from safety (the leeward side of a point), the biggest gust of the day almost capsized us - which would not have been good since the water was barely above freezing. The gunwale actually dipped below the surface for a split second before we righted. I yelled for us to get down on our knees to prevent any further mishaps.

After struggling across that small stretch of water, we finally made it to the campsite at about 3:30 PM. The campsite was everything we could have hoped for. It was protected from the wind, was nice and open, had a nice kitchen, and had a comfortable bed of pine needles for the tent. We decided that eight hours of paddling had been worth it.

We set up camp, made dinner, and relaxed for the rest of the evening.

The wind was still pretty strong, but it had died down enough to allow some exploration of the lake. A big reason we wanted to go to LLC was so we could fish (northerns and smallmouth are open year-round on many of the border lakes). We didn't fish much today, though. Instead, we paddled around looking at the different campsites. We explored Tiger Bay and a campsite with a sandy shore on an island near the Canadian border.

We heard ruffed grouse drumming throughout the day. We actually scared one up while we were exploring a cliff by our campsite. Even though I grew up in northeastern Minnesota, I don't think I ever really heard a grouse drumming. We were both surprised at how loud they were. The sound reminded me of a helicopter off in the distance. We heard many, many more throughout the weekend.

We spent the afternoon relaxing.

The wind died down some in the evening, so we went fishing. Auralee caught a few northerns. 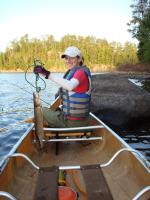 It was gorgeous today! We woke up to a lake of glass. We had been discussing whether we should go back to Agnes today to shorten our travel time on Monday, but we just couldn't leave after seeing this.

After breakfast we headed out fishing. We couldn't help taking a few more photos.

We had a bit of success fishing. We were able to catch dinner, so we were satisfied.

3 lb Northern - was going to be our dinner until I caught a 1.5 lb SMB later

This was our dinner - 1.5 lb Smallmouth Bass 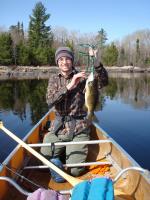 After catching the bass, we decided to stop fishing and explore some more. We climbed Warrior Hill - what a view! It was one of the more spectacular things I've seen in my life.

We went back to camp and relaxed during the afternoon. The sun was out, hardly any wind, and the temperature was in the 60s. It really can't get any better than this in mid-April.

After dinner Auralee had fun paddling around our little bay and fishing.

We only saw one other party today. The only reason I even saw them is they had an aluminum canoe and I heard it banging on the rocks at the portage across the lake. I saw the canoe disappear into the trees a couple of minutes later. Besides the soloist the first day, these were the only people we saw all weekend. It seemed we had the entire Lac La Croix to ourselves.

Time to head back...We got up at 5:00 AM, packed all of our stuff, and we were on the water by 6:45 AM. Once again, the water was like glass. We took the long portage instead of the two short ones from LLC to Agnes. We saw a moose while we were coming up to the portage - 2nd one of the trip. The portage was muddy, but in decent shape.

Nina Moose was also a definite contrast from our first day.

It only took us 5 1/2 hours to get back to the car (as compared to 8 hours getting in). Having no wind definitely made a difference.

The "After" picture - we were exhausted

We drove back to Ely, had Subway and Dairy Queen, and drove home. What a great trip! We really could not have asked for anything better. Just us two, seemingly (and maybe actually) all alone on Lac La Croix, with beautiful weather in mid-April.