Trip Introduction:
I found out about this trip on the Trail Talk website. I had hiked a similar route with two of the folks who were signed up.

I wish I was a better cook. I poured too much water in my oatmeal concoction and ate oatmeal soup for breakfast. Cow Patty also had oatmeal if I remember correctly. Mountainrunner made up some bacon and pancakes with dehydrated fruits for himself and Clayton. There is nothing like the smell of bacon in the morning.

I made a point to count all of the ticks that I found desperately crawling and searching for my blood. We left camp and headed up around Grub Lake and then toward Boot Lake. This part of the trail is pretty rocky. You really have to keep an eye out for rock cairns. Clayton and I ate a nice lunch at the breezy portage into Boot Lake. I missed Birdseye Lake along the way, but I am trusting MR to send me a picture. We camped at another backpacking site on the far west side of Disappointment Lake between the shore and the largest island on the lake. It was a nice campsite, well protected from storms. Not so good for sunsets or rises. When we rolled into camp we noticed a huge cloud growing due east. We thought it could have been a steam cloud from the Ham Lake fire. It was the only cloud in the sky.

We all got to freshen up a little. Supper was good. Most of the group stayed up until the sun had set. Clayton and I talked into the night about the joys fatherhood while further decreasing our pack's liquid weight.

Slept great that night with a low of 39.

Woke up to a chilly morning. Now this is how the BWCA should be in early may! The high on Friday was 57. That was great hiking weather indeed.

The only problem was that Friday was our shortest day. We barely hiked 3 miles before we got to out third camp on Becoosin Lake. Even though I had stayed at the same campsite on my last trip very little of it was familiar to me. If I were alone I would have thought I was in the wrong place and hiked on.

We ate lunch and eventually the other 5 decided to take advantage of the great weather and hike out early. I decided to stay the other site on Becoosin which I did remember from the previous trip. I said good bye to Mountainrunner and Clayton. (The Lorax, Griz and Cow Patty took off too quick for me to wish them a good trip home). I setup my hammock and took a nice long nap in the pines.

When I woke up, I weighed the pros and cons to staying. I had nowhere to be and a great campsite, but I had no duct tape to cover my heels so I packed up and left the peace of those pines. I enjoyed this part of the trail. It offered a variety in scenery. Lots of beaver dams, a couple ridge line hikes and a great view of Snowbank from a long ways off. I lost the trail for a while while crossing the little river out of Pickerel Bay. I noticed afterwards how close I was to the Kawishiwi River and Lake One. A large part of this section crosses some private land owned by the Potlatch Timber Company. They had clear cut the area and left many young aspens. The trail eventually dumps you right out of the woods at the parking lot. I was surprised when I looked up and saw the road. It took me just under three hours got get back to the trail head.

I pulled off a bunch more wood ticks, changed clothes and headed back to Ely for a beer. I also called my parents who where on their way up to the cabin on Farm Lake for the weekend. Since they would not be in town for a couple hours, I decided to see a movie. That theater in Ely is older than I am. It reminded me of the very first movie I ever saw in Renville, MN. The next morning I helped my dad haul some wood and furniture across the lake before they took me out to breakfast and sent me home to my family.

Looking back at the weather records, I noticed that Wed and Thursday had record highs.

I am hoping the next backpacking trip will be on the Powwow Trail.

Today is Tuesday, I have been out of the woods since Saturday. I am still finding ticks in my car and gear! 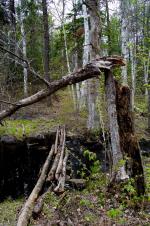 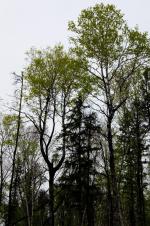 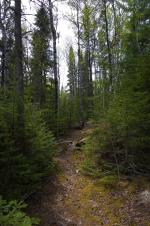