We camped at Sawbill on Thursday night for an early shuttle to Kawishiwi in the morning. When getting organized, I realized that I had grabbed the wrong blue bag and had a goodwill bag and not our day 1 clothing bag. This left us digging into our "rest of vacation" bags for some running shorts and t-shirts to wear. I also had to buy a knife and a headlamp at Sawbill... Oops!We had an uneventful night and had a couple of beers at the campsite and went to bed.[paragraph break]

In the morning, we had breakfast and got the supplies we needed. Then Luke shuttled us to the entry and we were on the water about 8:30. We headed out under sunny skies and warm temps. We made good time on the water and single portaged, with me taking the Bell and the granite gear pack, and Beth taking the old school canvas Duluth Pack. Rods were bdb'd and Beth carried the paddles. The flies were relentless all day on the water and the portages.

We did not see very many people on this Friday morning. A few on the water, but the portages were clear. We ran into one group of 20 something guys taking a break in the rapids pool just off the portage into Koma. We moved past them and headed to camp. We grabbed the site on the west narrows and set up camp.

Once camp was set, Beth went to find a place to "read"...

... and I rigged up for fishing. I had really good smallmouth action right from camp, and added a few northerns, too. We kept one bass for dinner and threw the rest back. This was the nicest one:

We crawled into a really warm tent at dark, as the skeeters came out in force. It was an uneventful night.

I let Beth sleep in a bit and fished some more. Threw a handful of bass back, again... Then we had breakfast and packed up. We hit the water about 9:00. We had another pretty uneventful day, except for the flies, and one brief thundershower than mostly passed south of us. We ran into an Outward Bound group on the way into Kivaniva, heavily loaded, with 12 days still to go. This was a group of all young women, I would guess late teens - early 20's. They chatted with us a bit and were very apologetic for blocking up the landing a bit.

It was HOT again. Oh well... Also, I have never portaged through as much underbrush as we did this trip. It felt almost like bushwhacking at times. We made good time into Little Sag, with a lunch stop on Makwa. We took the point site on the south side, just as the lake narrows on the East end.

IT was a bit breezy for me to go trout hunting. I took one little spin to cast some shallows for pike, but with no luck. We settled in high on the rocks and read / watched the lake until dinner. Then we sat again and watched the sunset before the skeeters came out.

This was a little shorter day, but lots of "hopping" with short portages and short paddles. It was actually quite tiring in that regard, since you can never "get into a groove". It was still hot, and some of the lower portages were muggy and uncomfortable. We also sill had more flies that we wanted. These were common threads every day. I have never dealt with being too hot for multiple days in the BDub before. The sun was oppressive at times.

We had an interesting experience coming through Whipped... Beth commented as I steered around a rock up ahead that the rock was "furry". The "rock" was actually a cow moose floating dead in the water. It looked to be very freshly dead, and was a very odd sight to see.

The portage into Hub felt long by the time we got there, and we were happy to get to camp on Mesaba. We had a nice breeze in the afternoon, but there was not much shade on the north campsite. The site was decent, but nothing special. We did some swimming to stay cool. We had an early dinner and got into bed early, ahead of the skeeters, again. For the third night in a row, we had the rainfly only halfway on the tent so we had airflow, but could clip it down quickly if needed.

We figured this was a short day, with an even shorter one to follow. We wanted an early out on Tuesday to get over to the resort to celebrate our anniversary. We made short work of the initial paddles and portages, before we got to the BEAST... This time I did not do a full single portage. I carried the pack and cane about halfway, then dropped the boat next to the trail and finished with the pack. I came back and got the canoe, then.

We ran into more people, here. There was a group of 5 in three canoes. It looked like a father and two kids, and then maybe some cousins or something. They were going the other way, and stopping to rest quite a bit. When I passed them going back to get the canoe, they asked how much farther, and did not like hearing they were only about halfway.

We decided to push through Kelso and into Alton in hopes of better sites and maybe some shore fishing, since the wind was coming up fast! The wind was out of the South and it was bug whitecaps when we hit Alton. We headed left around the point and took the campsite in the NE corner. This was the biggest site I have ever seen, and it had the wind coming in and lots of shade. We had a good afternoon of lounging, and a good dinner with no-bake cheesecake for dessert.

Once again, the skeeters came out fast when it got dark, so we called it a night. About 1:00 Beth woke me up because there were raindrops. We jumped out and put the fly down on the tent and guyed it out. It rained like crazy and there was lots of thunder and lightning, but nothing severe. Everything was washed out and wet in the morning, though.

It was foggy and wet in the morning, but very pretty. We took it slow, since we were an hour from Sawbill. We had coffee and let things dry out a bit before we packed up. It was an easy paddle on glass calm water, with some light rain at times.

We got back and bypassed the landing since there was a Boy Scout troop putting in carrying enough gear to furnish a house. We found a little access trail about 20 yards away and took out there.

We checked in the canoe and got showers, and called it a trip. 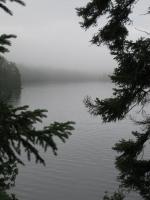