Trip Introduction:
I had missed my May trip this year and the only time to go would be the tail end of August. Had many different options for trip partners, but in the end only one would go (Gabe). Gabe had never done a wilderness camp expedition, so this was going to be interesting. We both had the same motivation for this trip, and that was getting away from the rat race. Mission was accomplished.

Picked up Gabe and headed north by 5 pm. Drove to Castle Rock Lake, where Gabe’s dad has a cabin and arrived around 9. Stopped at subway, just outside of Lyndon Station, for dinner. Gabe’s mom and dad showed up bout 10:30 and stayed up until midnight sharing stories.

Woke at 5 am and on the road before 6. Arrived at the Tofte Ranger station about noon, got our permits and ate sandwiches at the picnic tables next to the parking lot. Grabbed beer, bait, and gas and down the bumpy road to Kawishawi Lake Campground. Took a little over an hour to get there. Campground has five campsites in a loop, all with access to the lake and a sixth site that is on the lake and only accessible by canoe. Wind was around 20mph so we set up camp and got organized for the next day. Couldn’t keep the fire burning due to wet logs and had to cook dinner by the stove. Dinner was brats and Doritos.

Woke around 6 with the lake covered in a fog. Beautiful scene as we packed up the tent. Moved the jeep to the parking lot, which was full, and we were heading across the lake by 7:30am. Made our way through Kawishiwi Lake with no problem, then Square Lake. The first portage was easy. The second portage I got out and Gabe finagled his way through the narrows and before long we were on Kowachong. The two portages going into Polly got a little tougher, longer, and busier. On the second portage, from Townline to Polly, we encountered a grouse that was feeding and had no intention of stopping. So I kept my distance and hiked around him taking as many snapshots with my camera that I could. The end of the portage into Polly was steep but doable. Half the sites on Polly were empty, but we continued on. Three more portages and we were into Koma, although the last portage kicked our butt and we were getting tired. So we stopped to have some cheese, salami and crackers, to help reenergize. Not one person on Koma that we could see, but one more portage and we would be on Malberg. Once on Malberg looked back on the river running parallel to the portage and noticed a huge boulder, which I took a picture of. Got to the campsite we wanted and it was open. Set up camp and rinsed off in the lake. Campsite had three nice tent pads, nice canoe landing, and fishing availability. Gabe cooked dinner over the fire. We had steaks, left over brats and potatoes. Took the canoe down the east corridor of the lake but didn’t catch any fish. A storm was rolling in so we had to hurry back to camp. Made it with time to make a fire and enjoy for a short before the rain came.

Woke up and made bagel sandwiches for breakfast. Made our way west to the north bay and fished for a couple of hours. Gabe lost a huge bass (I think it was a large mouth) and northern at the canoe while I caught a small northern. Headed back to camp and had lunch and then decided to head back down the east narrows to the north bay. I caught a northern trolling down to the east end and Gabe caught the only walleye of the trip. We then both caught smallies. Headed back to camp to clean the northern and walleye. Had tacos for dinner, sat around the camp fire and called it a day. 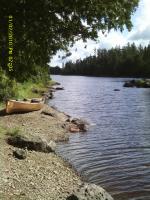 Woke up and made breakfast burritos with dehydrated eggs. All I can say is they tasted better with more hot sauce. During breakfast we could hear wolves howling off to the southwest of the lake. A little time had passed and we could hear the wolves south of us, and then a little southeast a little later. We packed up the cooking supplies and fishing poles and headed down the east narrows again. Ran into a couple of older gentlemen in the north bay, seemed they were staying in the site just south of us. We conversed a little and off they went and we continued across the portage to the Kawishiwi River. Paddled to the portage to Kivaniva Lake and hiked the portage over to the lake for a view. Then continued back to the elevated site on the river’s south shore, where we took a short break and continued west down the river. We both caught a couple of very nice smallies and stopped at the campsite on the northside of the river for lunch. Had a shore lunch of one of the smallies caught and the northern and walleye from the previous day. Continued down the river, portaged, paddled and got to the portage back to Malberg. Landing was muddy, but Gabe set off ahead of me with the pack and paddles. As I came around one of the corners with the canoe, I could see Gabe in the distance, soaked from his hips down. Gabe stated to stay in the middle of the trail, and I questioned him due to the puddle in the middle of the trail. He stated unless you want to be in mud up to your hips stay in the middle. This would become the running joke for the rest of the trip. Gabe said as he sunk into the mud he still had to look around to see if anyone saw his delema. Gabe rinsed as best he could at the end of the portage and we continued back to camp. Both of us jumped into the lake to refresh and clean ourselves off, although I know Gabe needed it more than me. We had hot dogs with mac n cheese for dinner, sat around the fire.

Made biscuits and gravy for breakfast and had a chipmunk come in to help clean up the dishes. We again heard the wolves off to the west howling. We packed everything up and were heading to Polly. As we finished the portage into Koma, I mentioned to Gabe, maybe if we are quiet we might get to see the wolves. Sure enough as we come around the corner of the bay leading into the main lake, Gabe saw three figures in the lake swimming north. I got the binoculars out and sure enough there were three wolves. I tried to take pictures, but they didn’t turn out very good. Didn’t matter though, because this would be the first trip I have ever heard and now seen wolves in the Bdub. We were on cloud nine at this time and continued down Koma and three portages later we were on Polly. Decided on taking the campsite on the west, so I could get some sunset pictures. Took a dip in the lake and casually set up camp. Decided to go fishing in the early evening, but didn’t catch anything but a couple of rocks. Came back to camp and had Cheesy potato soup with rice and chopped ham. Made way too much and for the first time I felt like a fat pig. Sat around the campfire and headed to bed early, due to wanting to get a good start on getting out the following morning.

Got up early due to not sleeping on a very good tent pad. Both of us kept waking up balled up at the foot of the tent. Didn’t matter, helped us get up early, get camp packed and heading to the first portage. Both portages into Kawashong worked out very good, very crisp morning for travel and sweating was at a minimum. Could feel the wind out of the west and by the time we made it to Square there were white caps on the lake. We were able to maneuver around the lake and make it to the river. Ran into a group heading in and asked them about the wind and waves, too which they seemed unrattled. We continued down kawishiwi with the wind at our back, a first for me, and made the entry point. Had everything packed into the jeep and on the road by 11. Got home around 10.

Looking back on this trip, I'm glad we got it in before the fire. It will take the forest some time to rebuild and it will never be the same in my lifetime. 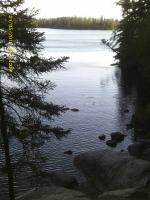