It got cold the first night! Not sure how cold, but obviously below freezing as evidenced by by my slushy dromedary bag and the frozen puddles on the rocks in the morning. Speaking of the morning. This was simply the most beautiful morning I have ever witnessed. It was perfectly calm and quiet. As I watched the mist rise from the lake during the sunrise a moose suddenly broke the silence when it called out from the far shore. Unbelievable. I took a bunch of pictures, and while none do the moment justice, I'll let them speak for themselves. 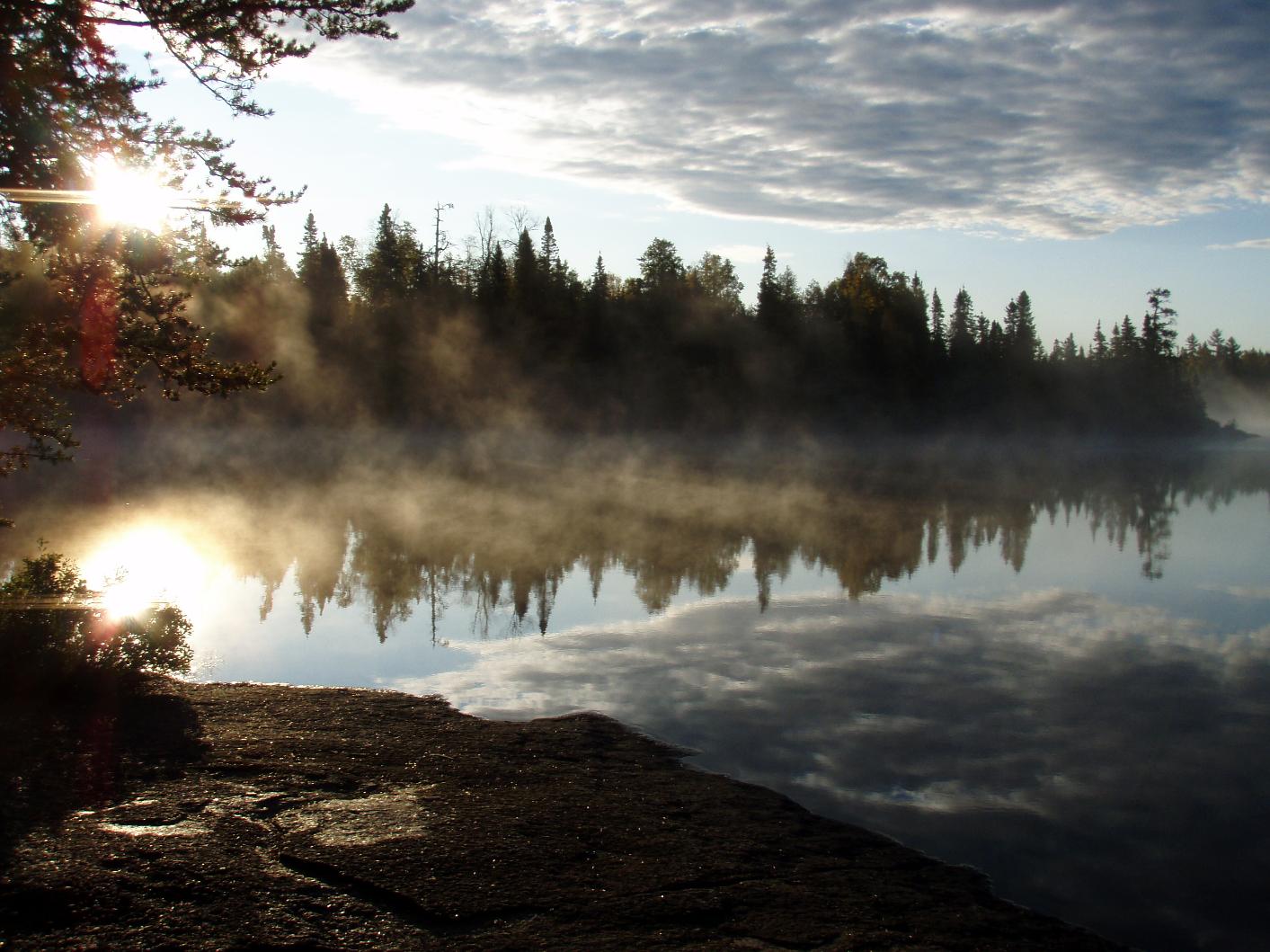 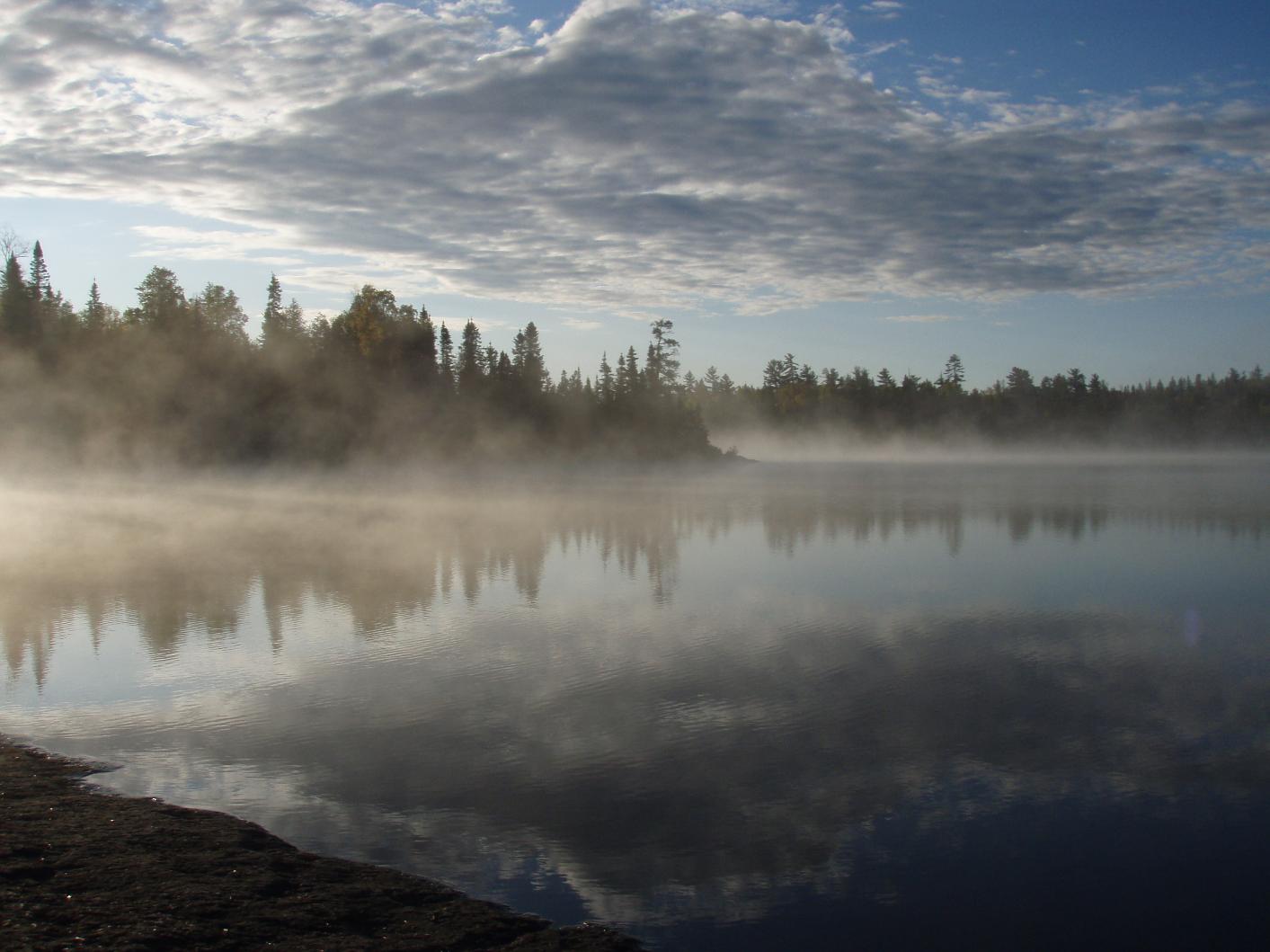 I let it all soak in, and warmed up a bit with some coffee and decided it was time to break camp. As I paddled out the lake was still pretty foggy and it was eerily beautiful to paddle into. 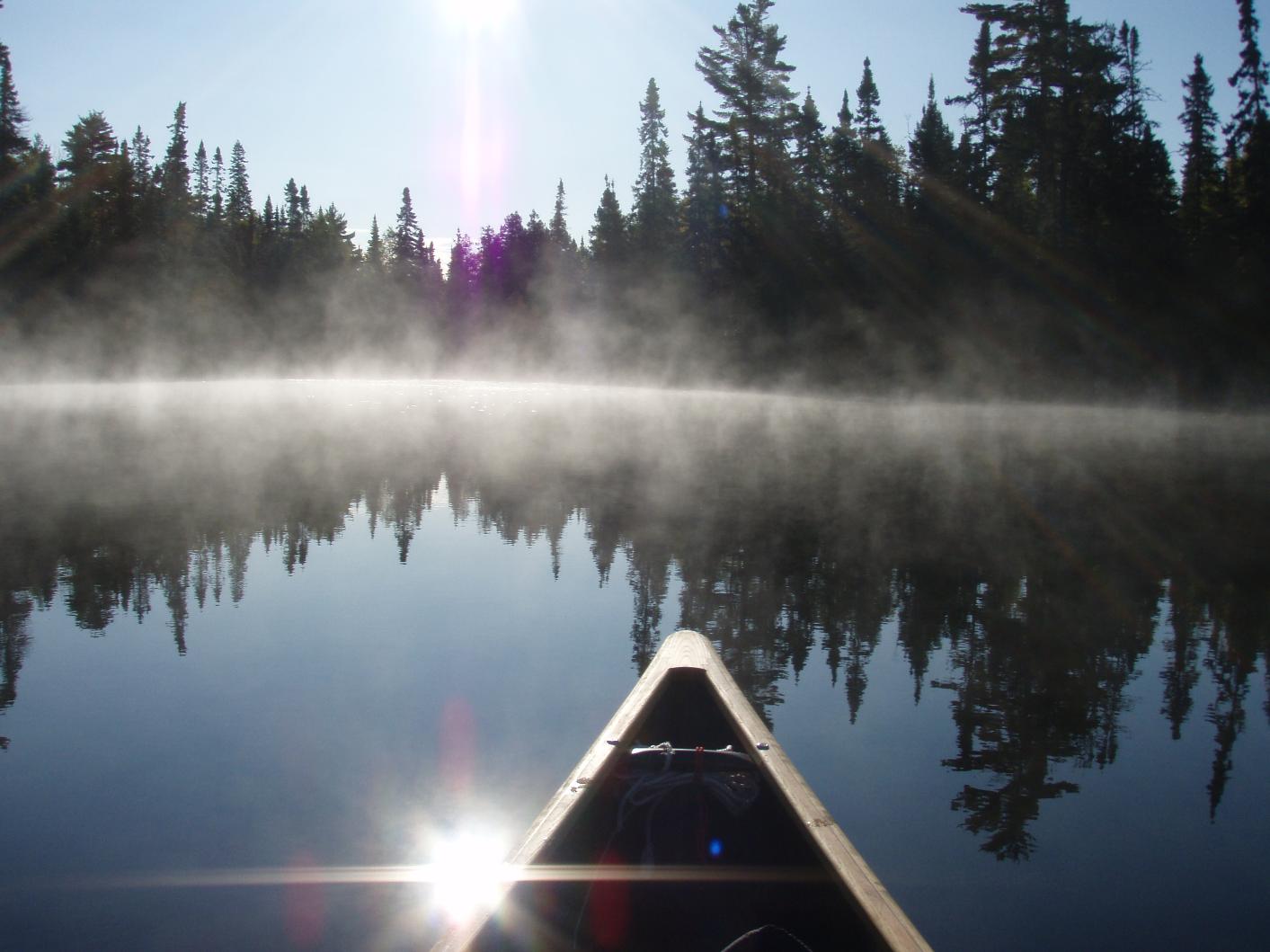 Little did I know that by the end of the day, I would have paddled my most memorable day in the Boundary Waters I've ever had. After hearing the Moose calling out in the morning it sounded as if it was near the portage. Now would probably be a good time to mention I have never seen a moose in the wild. I have been to the BWCA at least a dozen times and every time come home empty handed in the moose department. As I walked the portage into Brewis Lake I thought to myself "maybe this will be the day I finally see a moose" As much as I wanted to see a moose, I really didn't want to run into one of the portage. As I looked down to where my next step would be a saw a nice fresh moose print. then several more in the mud along the way. I'm sure it was made by the moose I heard earlier in the morning. It may have seen me, but I never saw it.

Without much fanfair I made it into Harbor Lake, then North Wilder. The day was absolutely beautiful. As I paddled through North Wilder, I decided I'd have to come back through someday and camp there. After a short portage I was setting into the creek that runs out of North Wilder and up to Hudson. It was a beautiful little creek and again said to myself "If I'm going to see a moose this trip, I'm sure it will be in here" 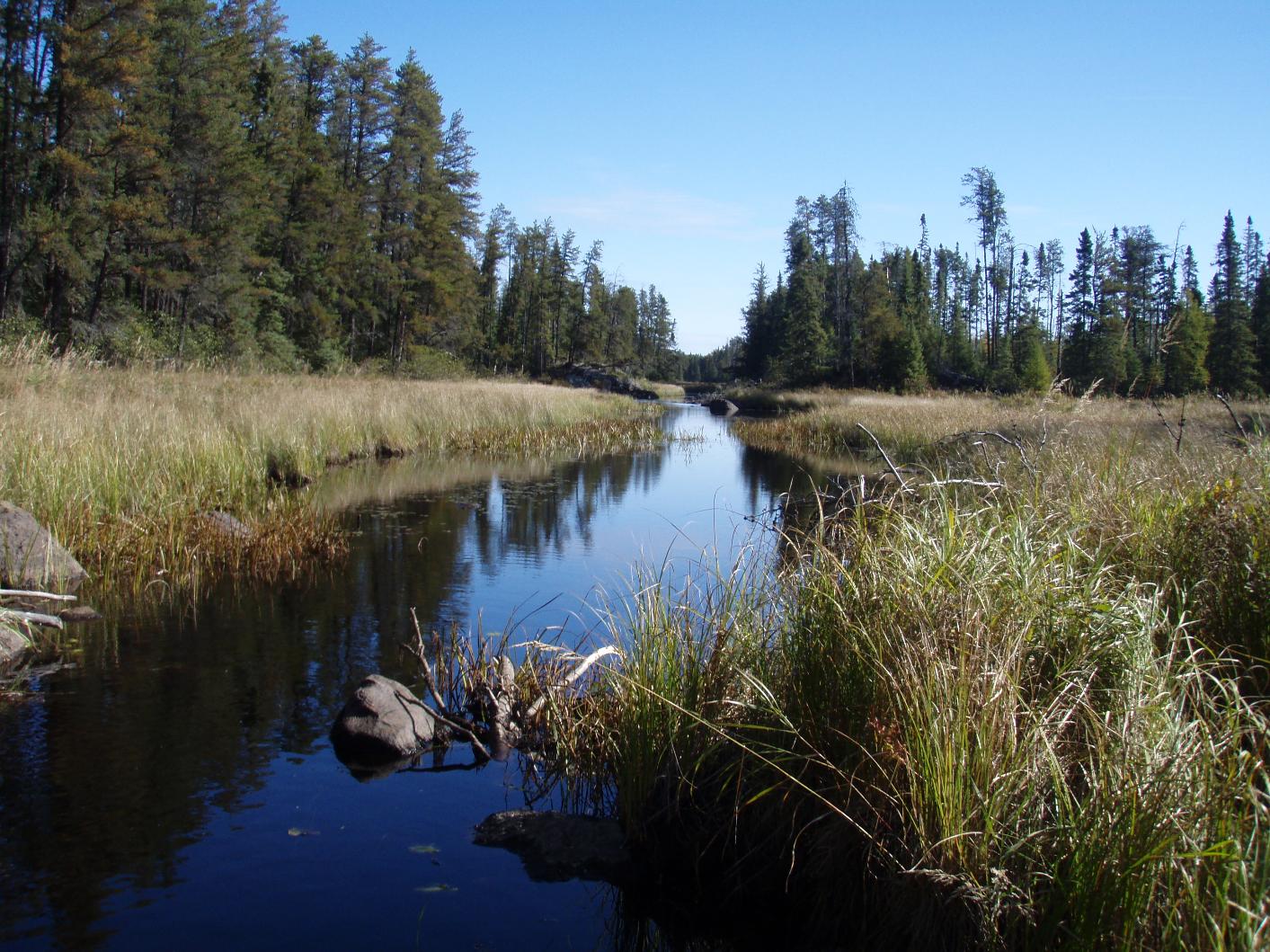 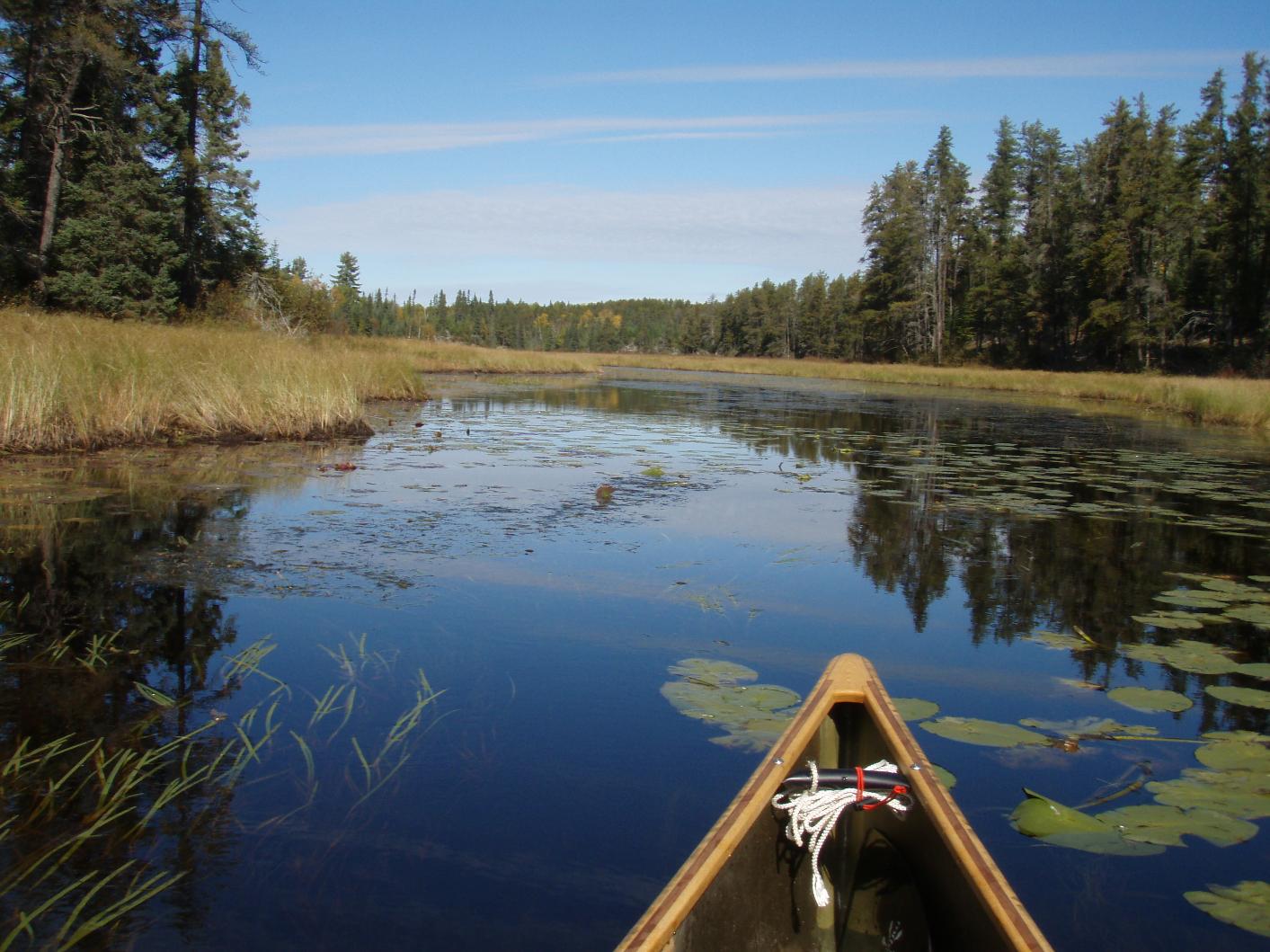 I haven't paddled many streams like this. It was so quiet it hurt your ears. There was something both stunningly beautiful, and silently eery about paddling through there. The stream was often no wider than 15' or so and was surrounded by tall grasses that made you feel a little bit trapped.

I had been paddling about 15 minutes or so into the creek and as I turned a tight curve I saw it. There just above the grasses was the rack of a bull moose. I couldn't even see the body of the animal from my vantage point down in the canoe. He ran off in a trot as the antlers seemed to glide effortlessly above the grass. How something so large could move so quietly I'll never know. At this point I couldn't have been more that 20-30 feet from the bull. He took off to the east and started to grunting and bugling. Within seconds I heard a call back! There were now two very close to me, but the somewhat scary part is I couldn't see them, and I was stuck in the stream wherever it took me. I slowly paddled, not wanting startle such an animal so close.  Around the next bend I saw them. A hillside cast a shadow on them and they were hard to see at first but there they were. A bull and a cow were standing on the shore very close together. I froze. I was maybe 80-100' away at this point. Then I heard a splash to my left and up pops the head of another moose! This time a calf was feeding in the stream. I'm guessing the bull saw me coming, than ran off to warn and join the other two. I managed to snap one photo during the first view of them. It isn't very good, but if you look closely you can see the two of them on the lower right, and if you pan left over the grass you'll see the ears of the calf. 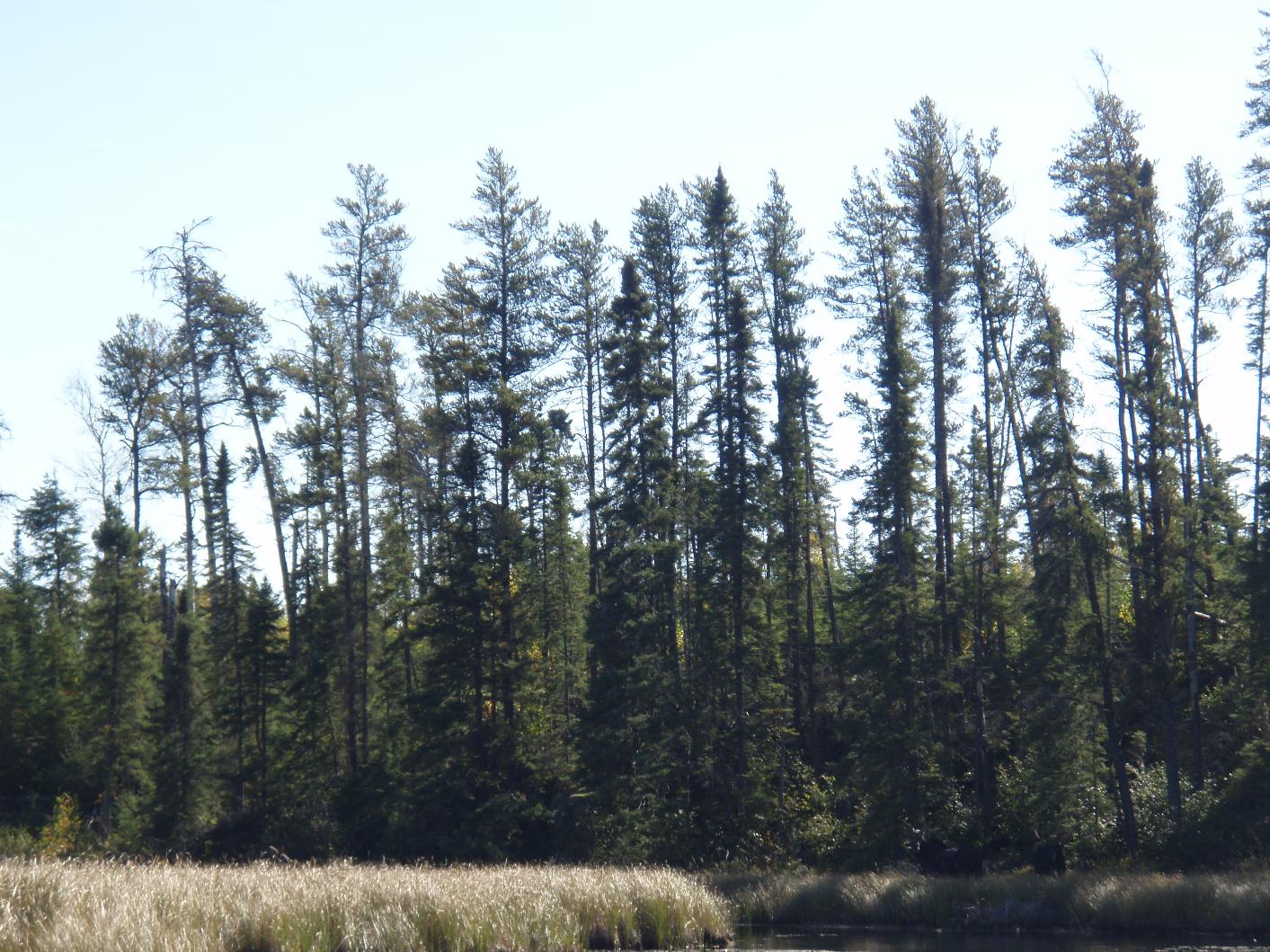 I took that same photo and tried to zoom in and lighten it a bit to better see the moose. 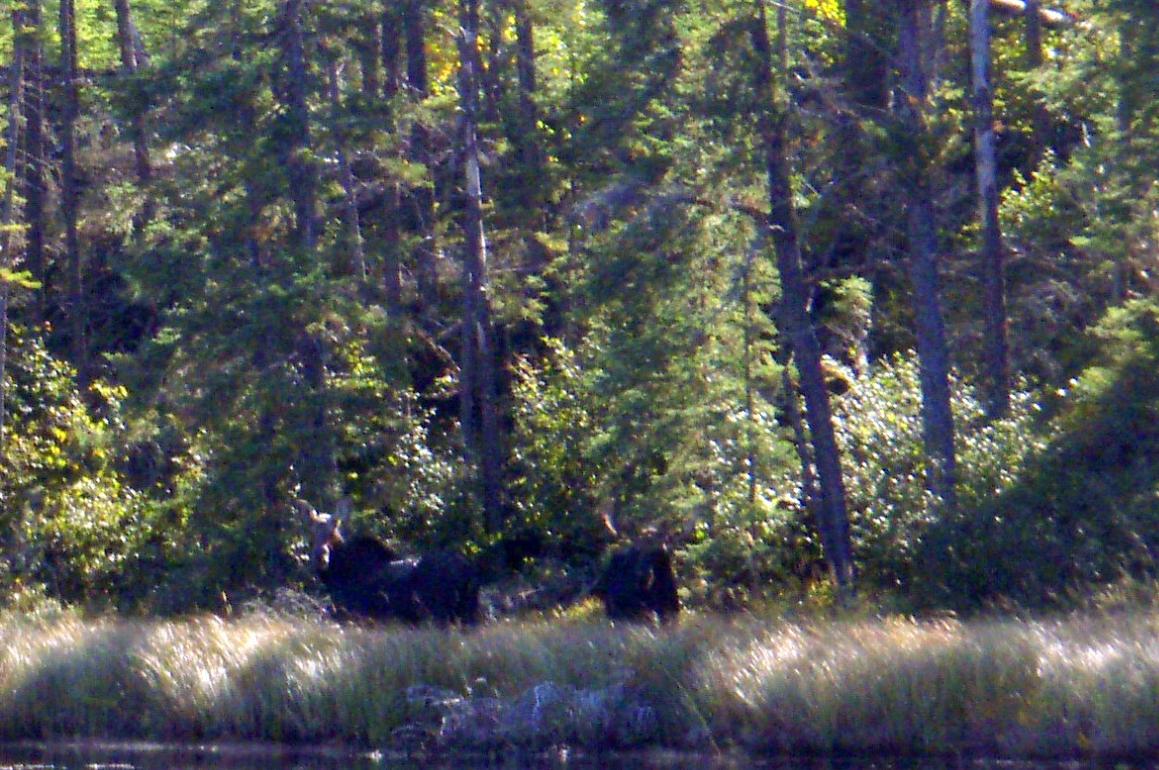 I watched them for a short while, not really realizing that the slight current and my last few paddle strokes had given me enough momentum to keep getting closer to them. The bull then called the calf over to the two adults. My heart was beating through my PFD. I had a whole family of moose right in front of me! I wish would have taken more pictures, but I guess I was too caught up in the moment. At this point my momentum had brought me within about 40-50' of the group and the bull decided that was close enough. He took a few steps into the water toward be and made it clear I had come close enough. My heart went from beating through my chest to a halt. I was worried, I had them trapped. The hillside behind them was near vertical, maybe 15-20' up and they didn't seem to have anywhere to go but toward me. Luckily for me I underestimated their climbing skills. The bull again barked some orders and the cow and the calf scrambled up the hill fairly easily. Once they were up the bull turned and went up himself, thought not so gracefully. He crashed into trees with his antlers and stumbled several times before cresting the hill. There was one point he slid back down about 8 feet and I wasn't sure he was going to make it over.

I sat there motionless for what seemed like ages, though was probably only a minute. I slowly started to paddled, repeating in my head what I had just witnessed. I went from never having seen a moose to seeing three. I was in awe. It was the most amazing thing I had ever witnessed in the wild. In some respects it was unfortunate that I had no one there to share it with, but in other respects that moment is mine alone. No other person saw exactly what I saw or ever will. I'm smiling even now as I'm typing away and trying to explain what those few minutes meant to me.

Last year I ran into some moose hunters on my solo trip and they asked me if I had seen a moose. I replied "Nope, sorry I can't help you. I've never seen one up here".  I decided at that point if I ran into any hunters this year, my answer was going to be the same.

After all that excitement I will admit I made a bit more noise during my time in the creek. I decided one close encounter was enough for one day.

Pretty soon I was on Hudson lake, and made my way over to Lake Four via the short portages.

I saw a few other groups, and one other solo traveler on my way to Lake Two. Almost all the campsites were open until part way through Lake Three. Then I started to notice most sites were filling up and a few canoes wandering Lake Two looking for sites. I happened to get to the site on the point right in the middle of the lake and it was open, so I though I better just take it.  I set up camp, tried to find some wood down the shore as the site was stripped bare of anything that could be even remotely considered "dead and down". The previous campers had cut a live pine down and tried to burn it. I dislike the fact they did that, but I decided I could cut it up, dry it on the grate while I burned the drier wood and then burn it as the night went on.  I settled into my routine of reading and sipping and snacking. To cap off such a memorable day, I was rewarded with one of the prettiest sunsets I've ever seen there. Once again pictures don't really do the moment justice, but I'll let them try. 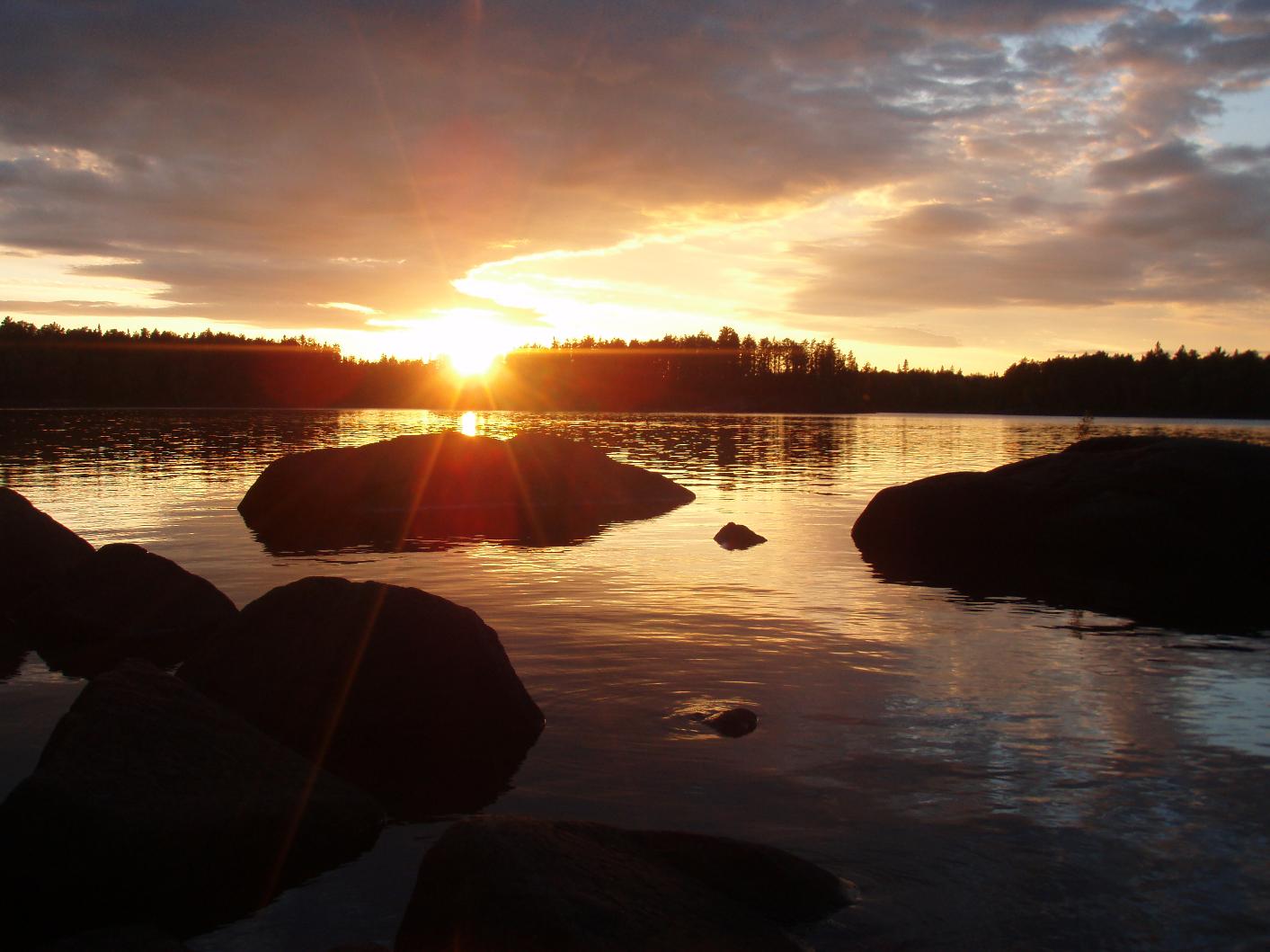 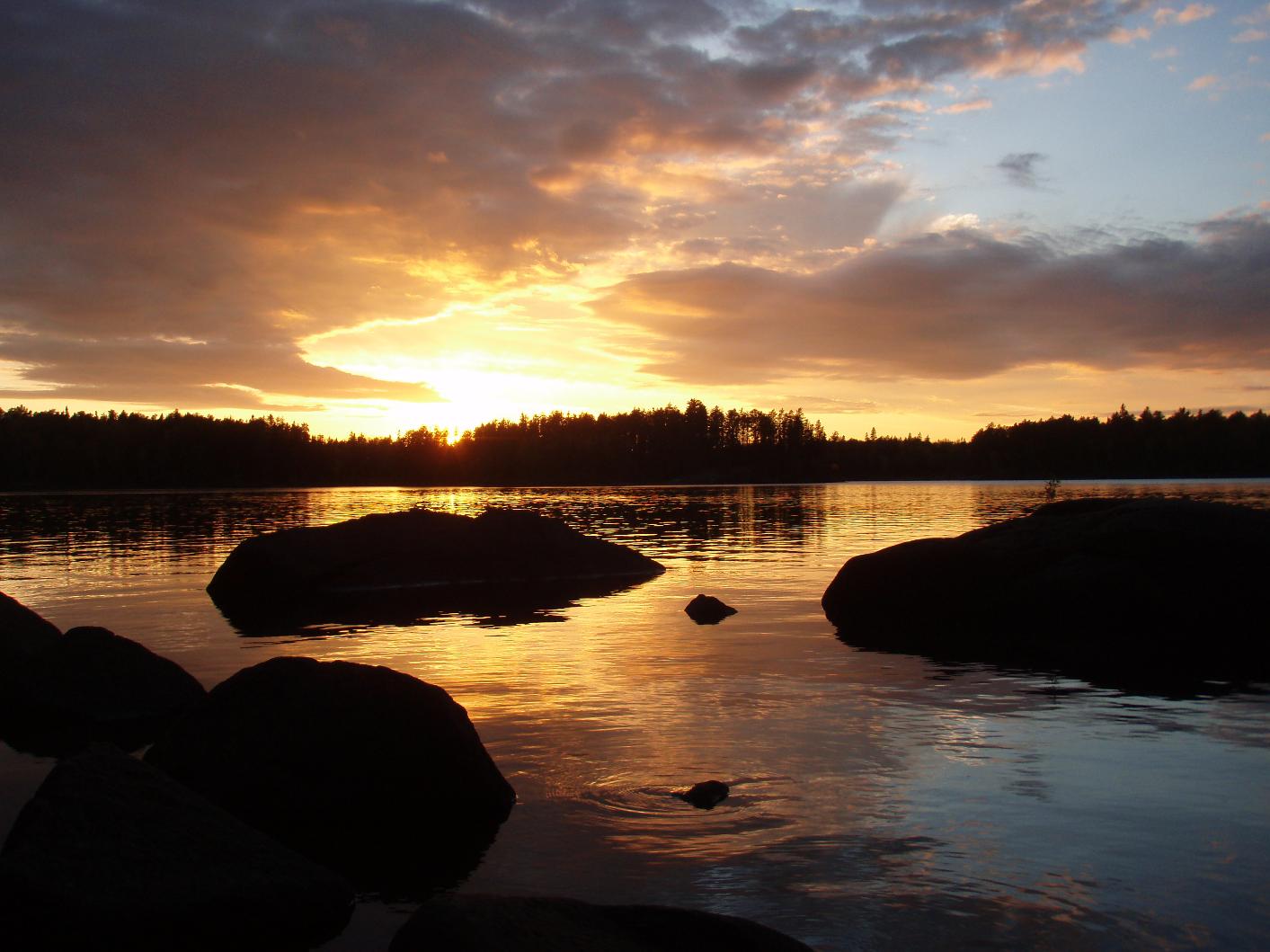 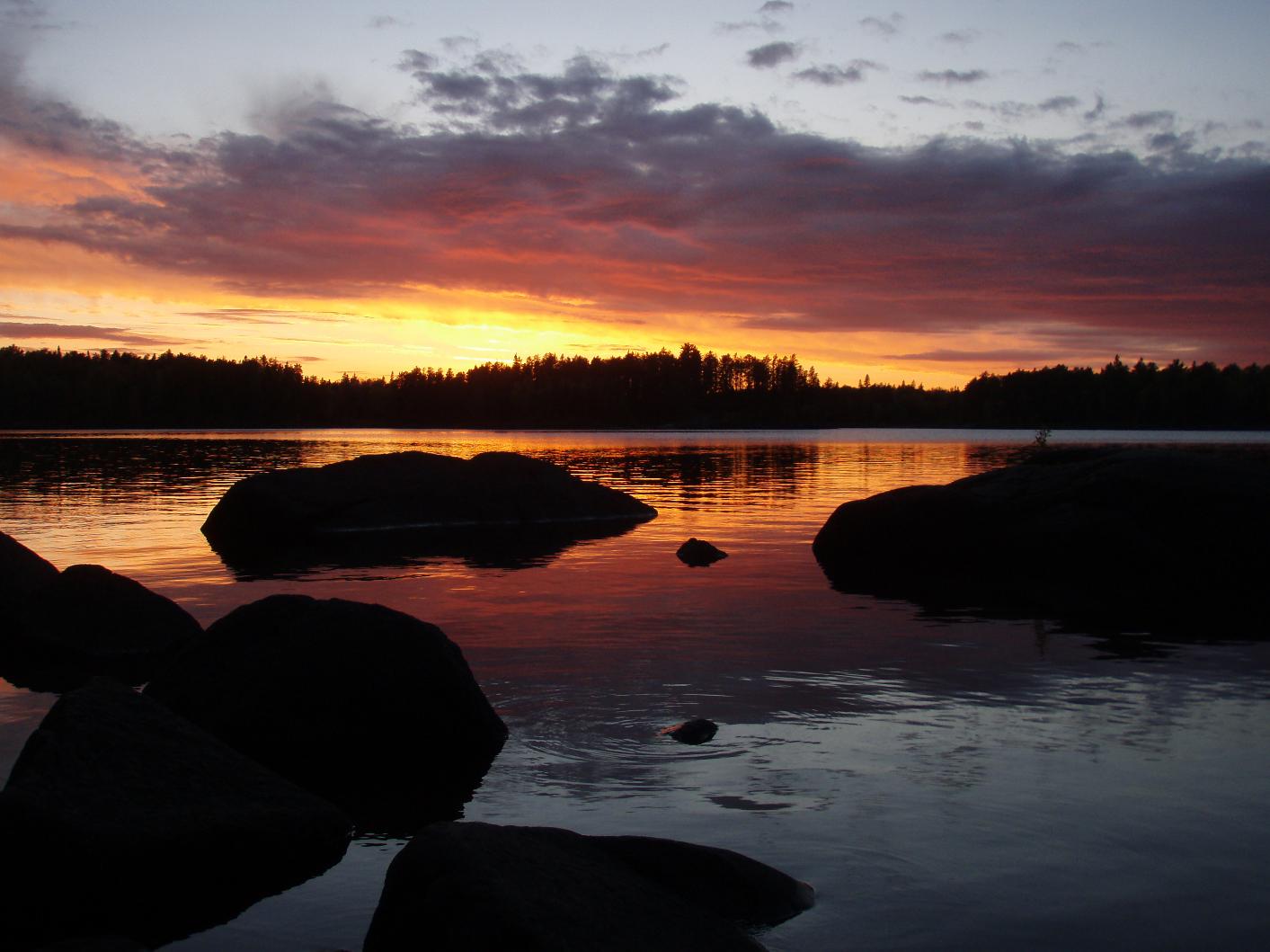 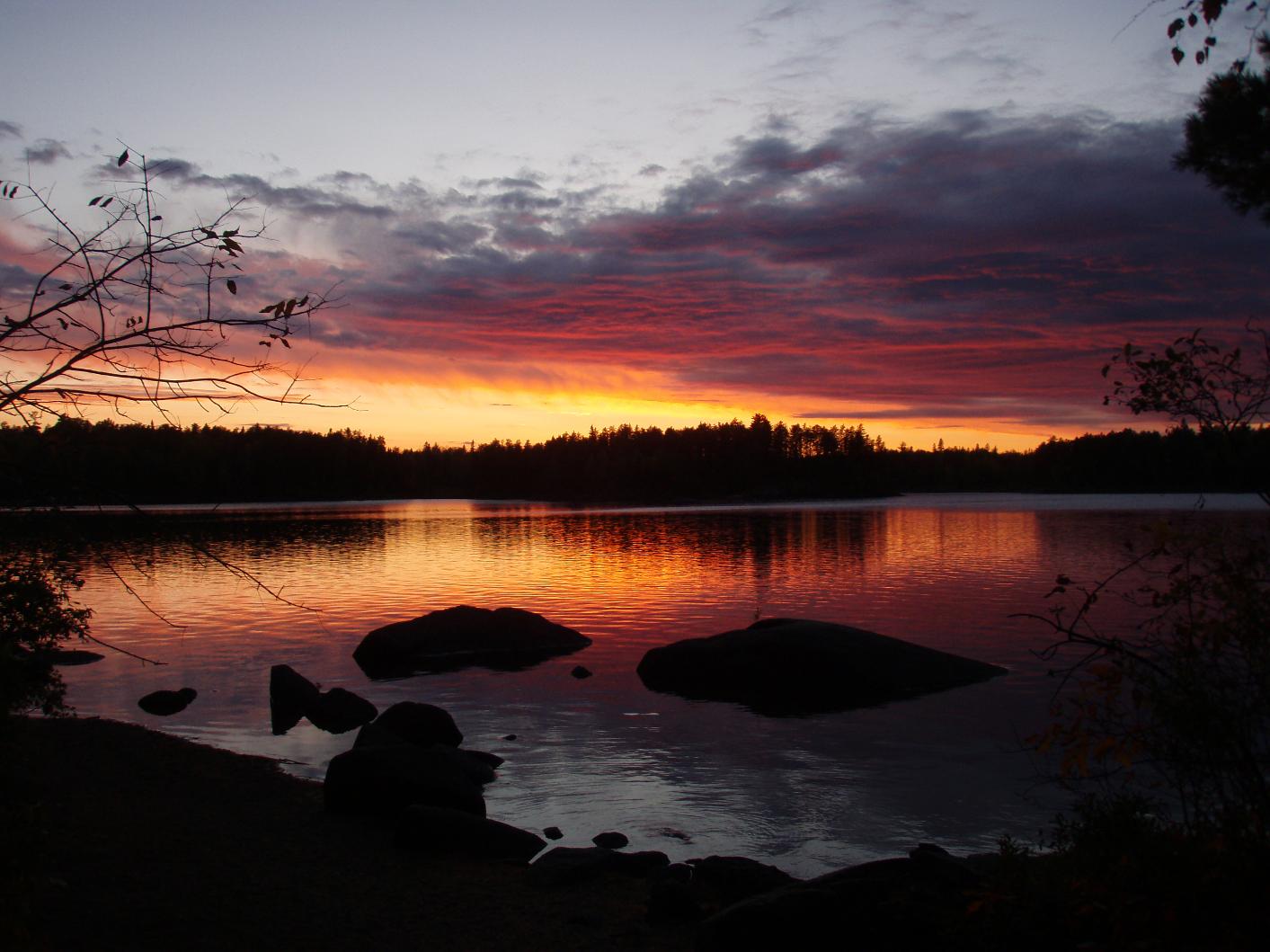 Soon after I finished Rob's book then started in on "Three Cups of Tea" and headed to bed.