The historic pictograph route
by TuscaroraBorealis 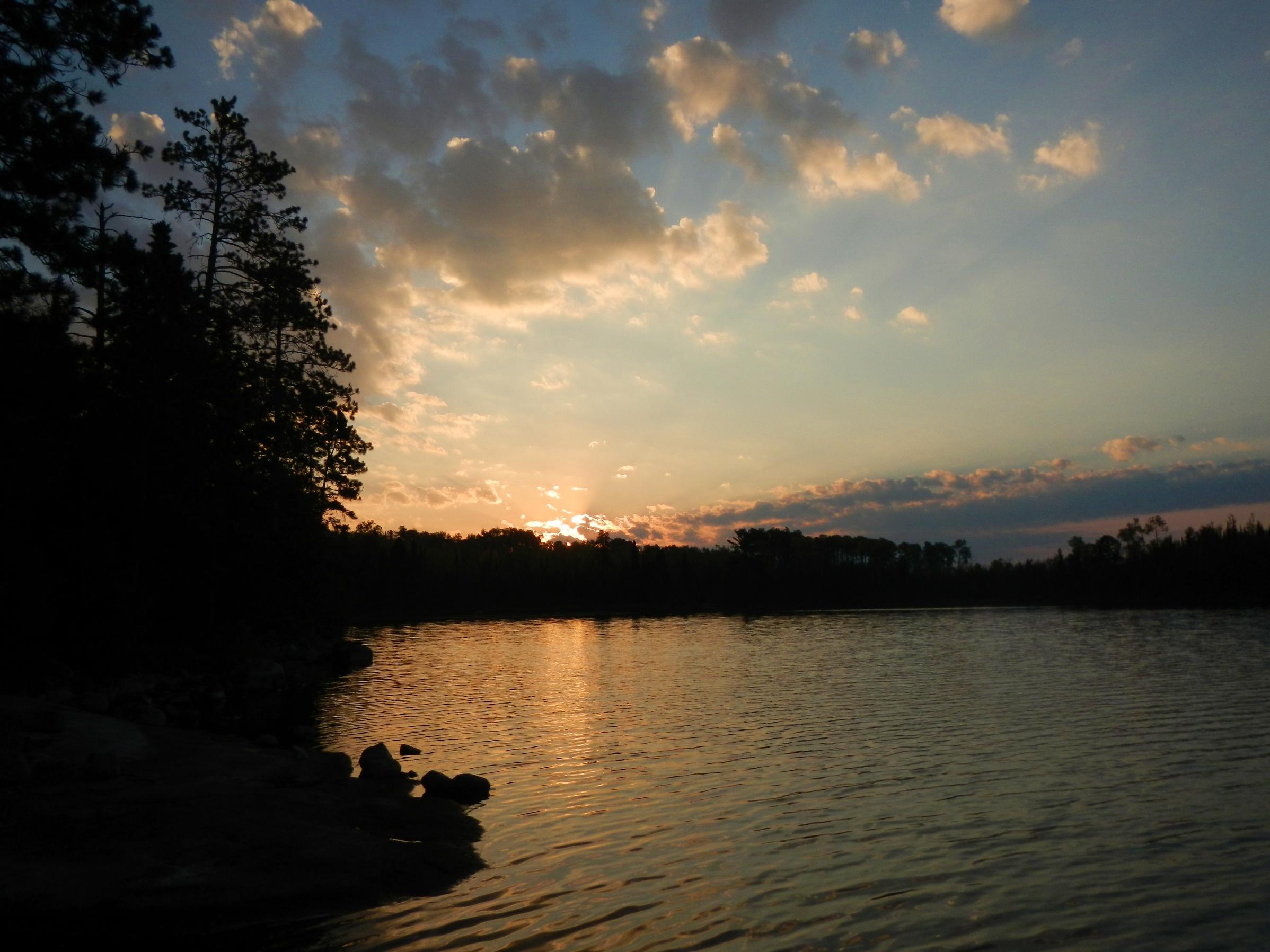 With our late arrival last night, it should go without saying that we had haphazardly set camp up. So, before breakfast, I got our CCS tarp up, found some firewood and finished getting camp situated while Vickie prepared breakfast.

We definitely weren’t setting any speed records after breakfast but, in due course, we were ready to embark on our day trip loop. The Gun Lake portage was a short paddle east from our campsite. There were some boulders to avoid as we neared the landing where there was a slightly submerged old rock crib dock. This was a short, flat trail that dropped down to a reasonably decent landing on the Gun Lake end.

Tracing the northern shoreline in an eastern direction we paddled past the campsite (that didn’t overly impress either of us) located there. Shortly after, we pulled off where Vickie noticed some shoreline rocks that she felt required a closer inspection.

Continuing on down the ‘barrel’ we came to the Bullet Lake portage. It was another short trail, but the path, and especially the landing, was very rocky. As we approached the Narrows of Bullet Lake, navigable water was in short supply. Soon we stalled out. In hopes of proving my gallantry, I warily climbed out and began dragging the canoe through the slop, hopping from hummocks to hummocks. Having made it most of the way through, I attempted to position myself for one last pull & then a successful re-entry. It was then and there that my entire right leg disappeared in an instant! 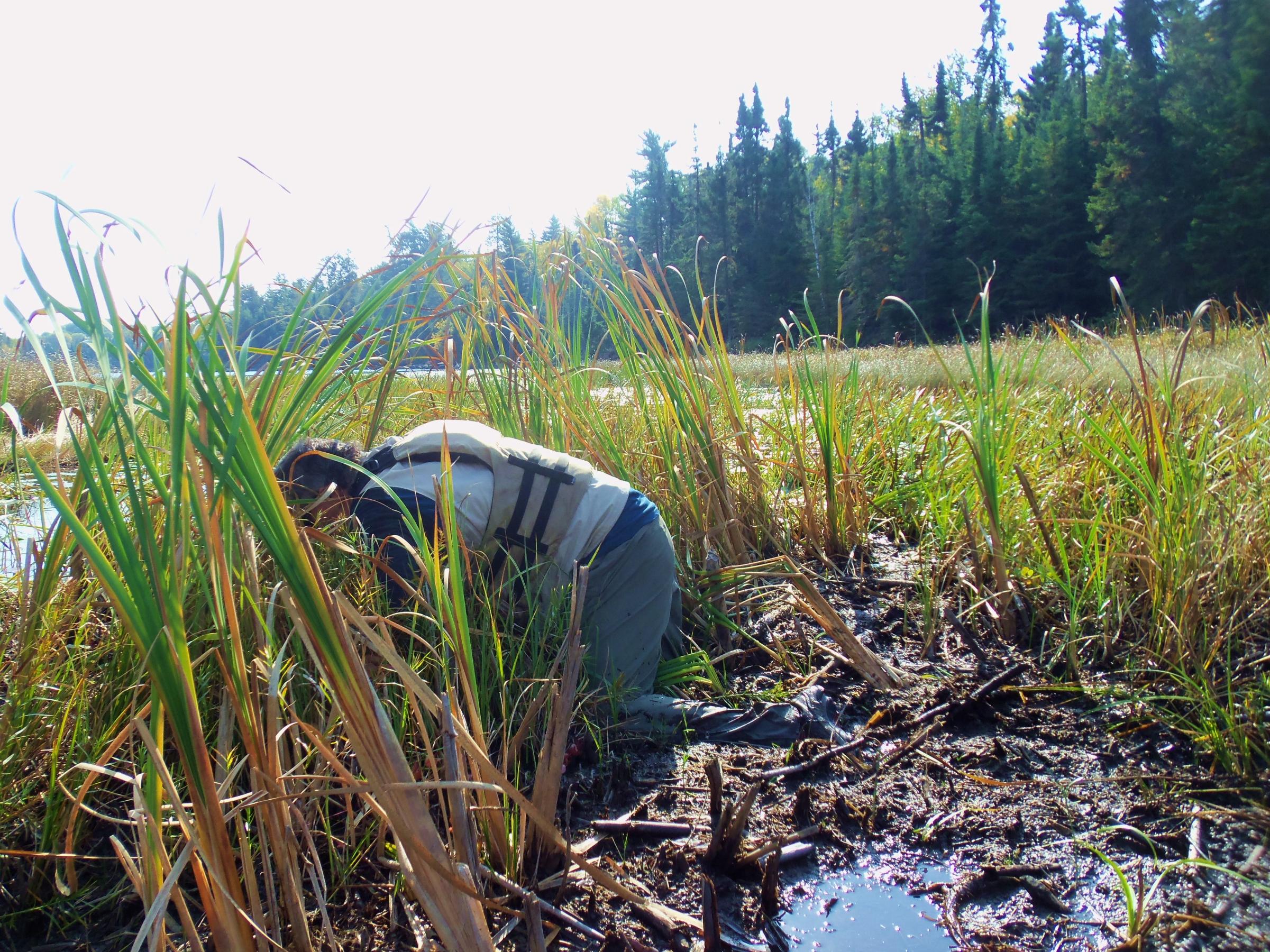 Of course Vickie nearly flipped the canoe laughing. And, apparently having shaken the sluggishness of this morning - was lightening quick with her camera. Fortunately I was able to successfully extract myself (boot intact) without assistance, and re-enter the canoe, albeit quite a bit muddier, to continue our journey. We paddled onwards to the Moosecamp portage which was another short trail that was quite ‘soft’ on the Moosecamp Lake end. With Bullet Lake mud still fresh on my mind, as well as my pants leg, I took extra precautions here.

A couple of other canoes were seen fishing as we paddled up to the unoccupied campsite near the mouth of the Moosecamp River to take a break. The first people we’d seen since Angleworm Lake yesterday.

This was once the location of an old logging camp, and there is an array of old logging artifacts or, depending on your perspective, junk, in & around this campsite. Even the log seating around the fire grate is held in place by some old iron that was left behind. Still, I felt this was a very nice campsite that had a lot going for it. 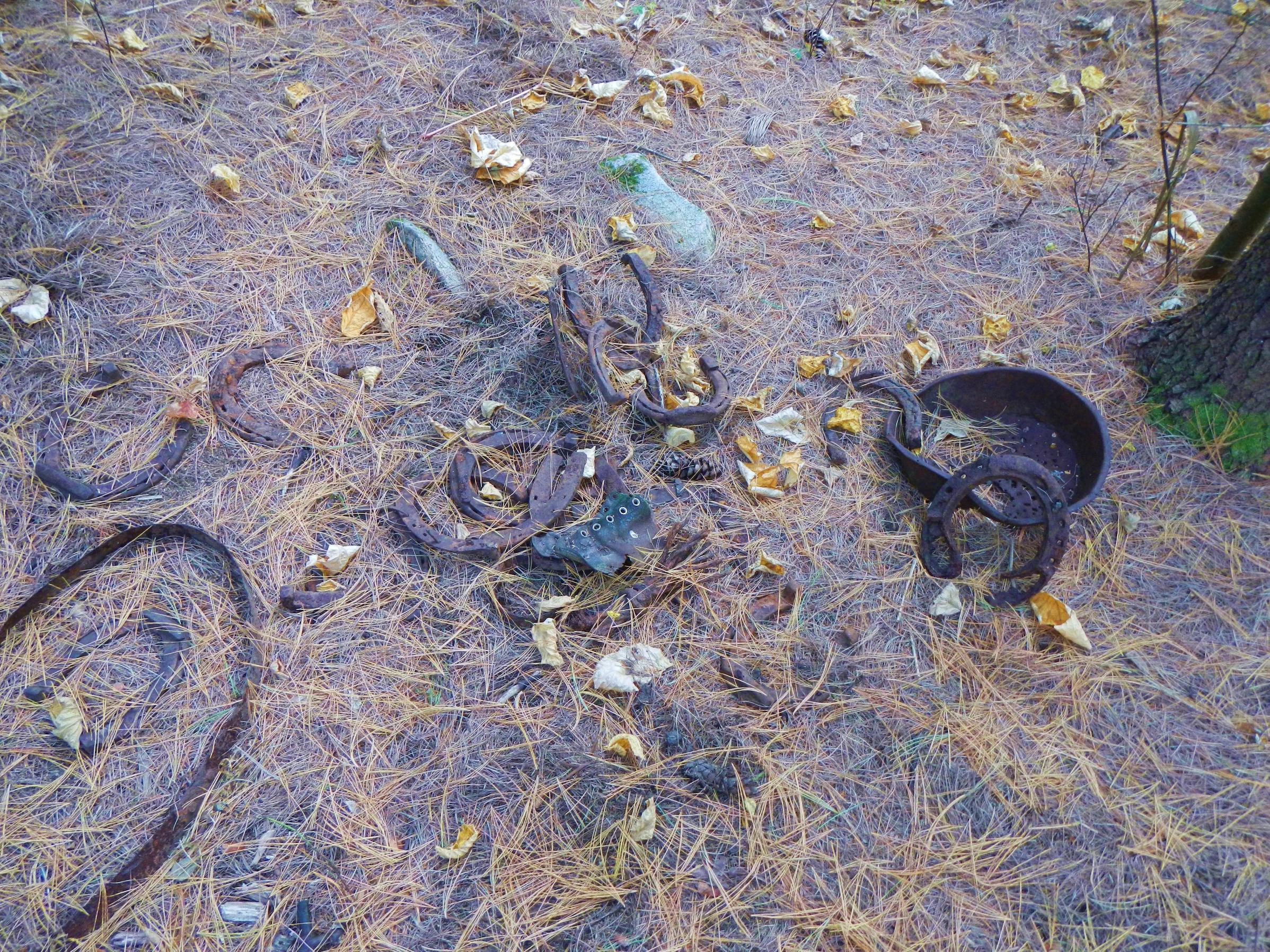 Rested & content with our explorations, we pushed off up the Moosecamp River. All along the river banks were tell tale reminders from the logging era. Large logs with holes in them were scattered all along this stretch of river. If you looked close enough, some of them still had chains attached. 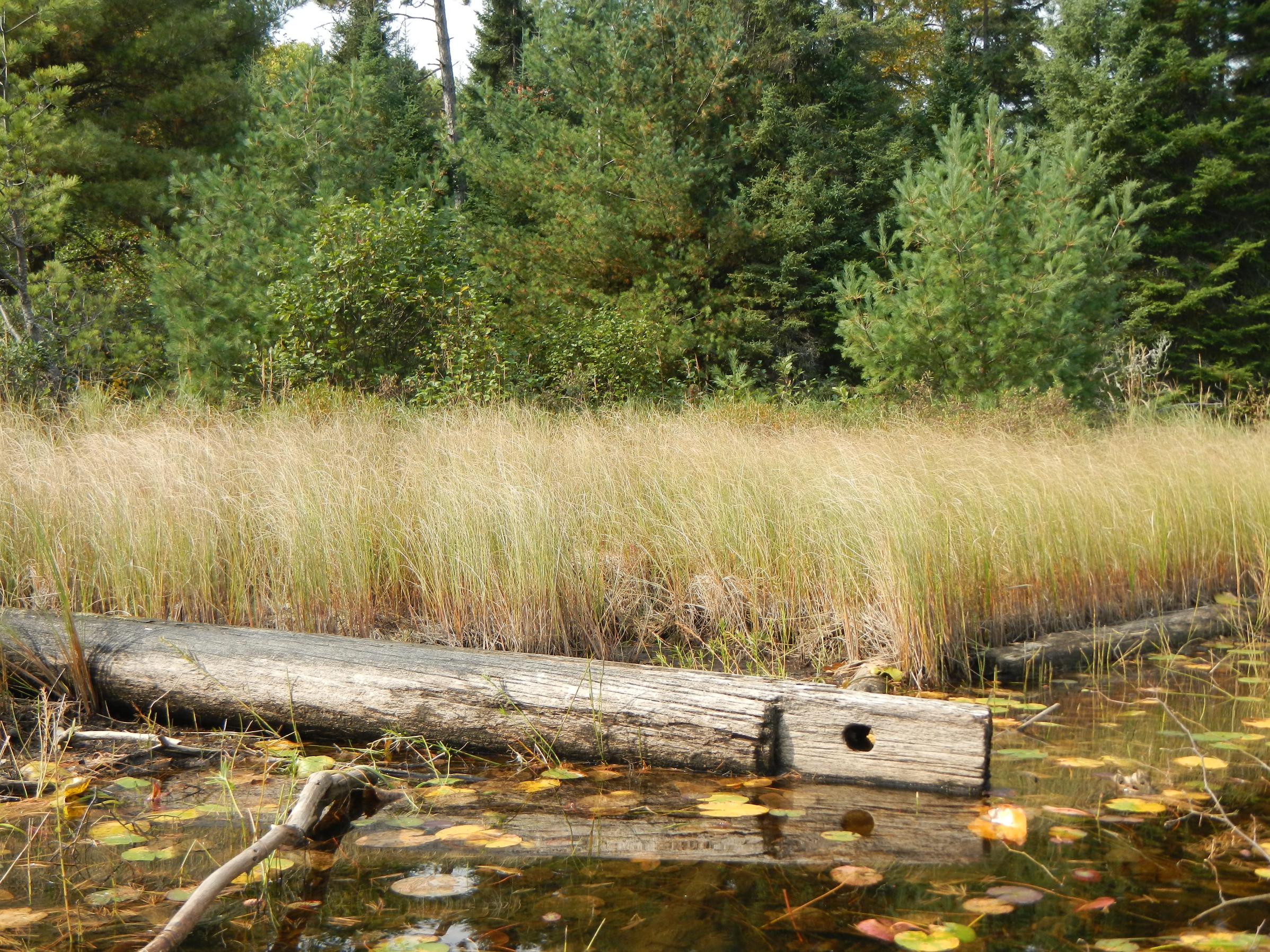 The river was exceedingly weedy and shallow at this end. So shallow, in fact, that I’m not sure we would’ve made it through fully loaded. We discussed the wisdom of continuing on. I’d been through here on other occasions during higher water, and recalled this condition existing in this section back then. I was confident we’d be able to float/paddle all the way to Fourtown Lake. Hopefully I wouldn’t have to eat my words!

Thankfully the river proved to be navigable the entire distance. Though, despite the heat of the day, I must admit there were some sections that made me sweat more than just a little. 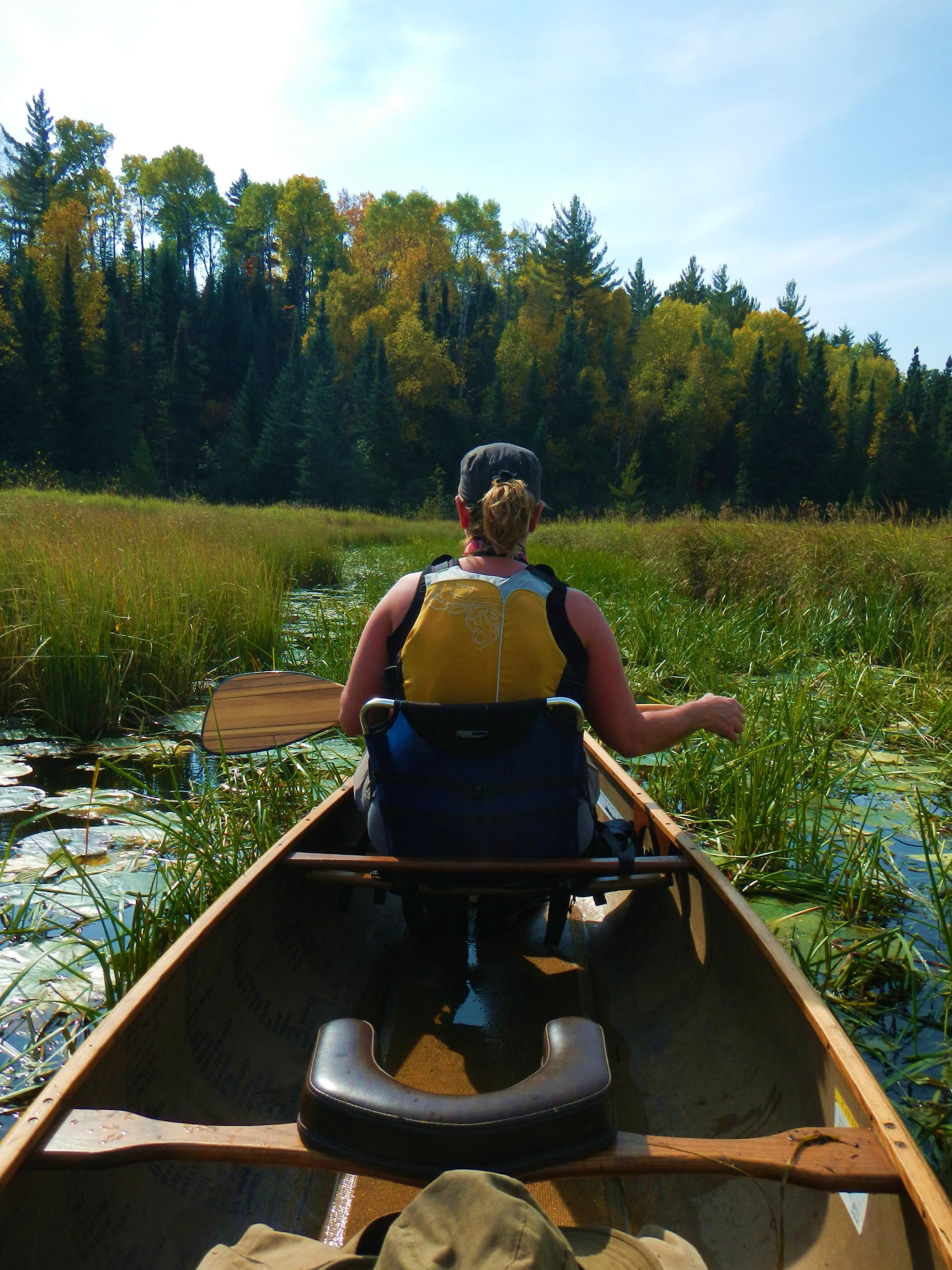 As this report should clearly exhibit, Vickie is quite a trooper when it comes to the trials & tribulations that are associated with travel through canoe country. I couldn’t hope for a better tripping partner. But, of course no one is perfect. Vickie’s Achilles heel is dealing with mud & muck; most especially in a river or lake setting. And, the maddening succession of beaver dams we encountered on the upper section of the river tested her mightily each time we needed to hop out and pull through. She couldn’t seem to appreciate the fact that the dams were actually helping maintain floatable water levels.

I tried to soothe her psyche by informing her that the impressive cliffs & escarpments we were paddling past meant we were nearing Fourtown Lake. Sure enough, the lake was soon in sight. Emerging from a swampy lowland like we did; made the expanse of Fourtown Lake unfolding before us, seem all the more striking. We paddled over to the campsite on the north side of the large peninsula directly south of the river’s mouth to take a break.

Fourtown is a very beautiful lake. But, it is a late comer as far as canoe country is concerned. It didn’t achieve protected (non motor, floatplane etc.) status until the late seventies. According to an old Boundary Waters Journal article, there were even cabins on the south end of the lake that weren’t dismantled until 1982. Not to mention the obvious logging activity that occurred in the vicinity. To be sure, Fourtown is a lake with an interesting history.

After recharging a bit, we paddled down the lake in hopes of checking out the campsite on the south end of the lake with the old automobile & artifacts. There were a few people out & about on Fourtown, and unfortunately that campsite was occupied, so we didn’t feel comfortable going ashore there.

Later, as we headed towards the Boot Lake portage, small waves were forming as the wind was slowly gaining some momentum. I always enjoy the view looking back at Fourtown Lake from this portage landing; so once there, we spent a few extra moments appreciating this scene. Once on the other side, we could clearly see a weather front moving in. About the time we rounded the ‘ankle’ of Boot Lake, sporadic rain showers began falling. Most of the campsites were occupied, so pulling off wasn’t really an option. Luckily, the wind wasn’t blowing that bad.

By the time we reached the portage to Fairy Lake, a good old soaker had began in earnest. We each donned our rain gear, and then shared a blueberry bagel before resuming our journey. 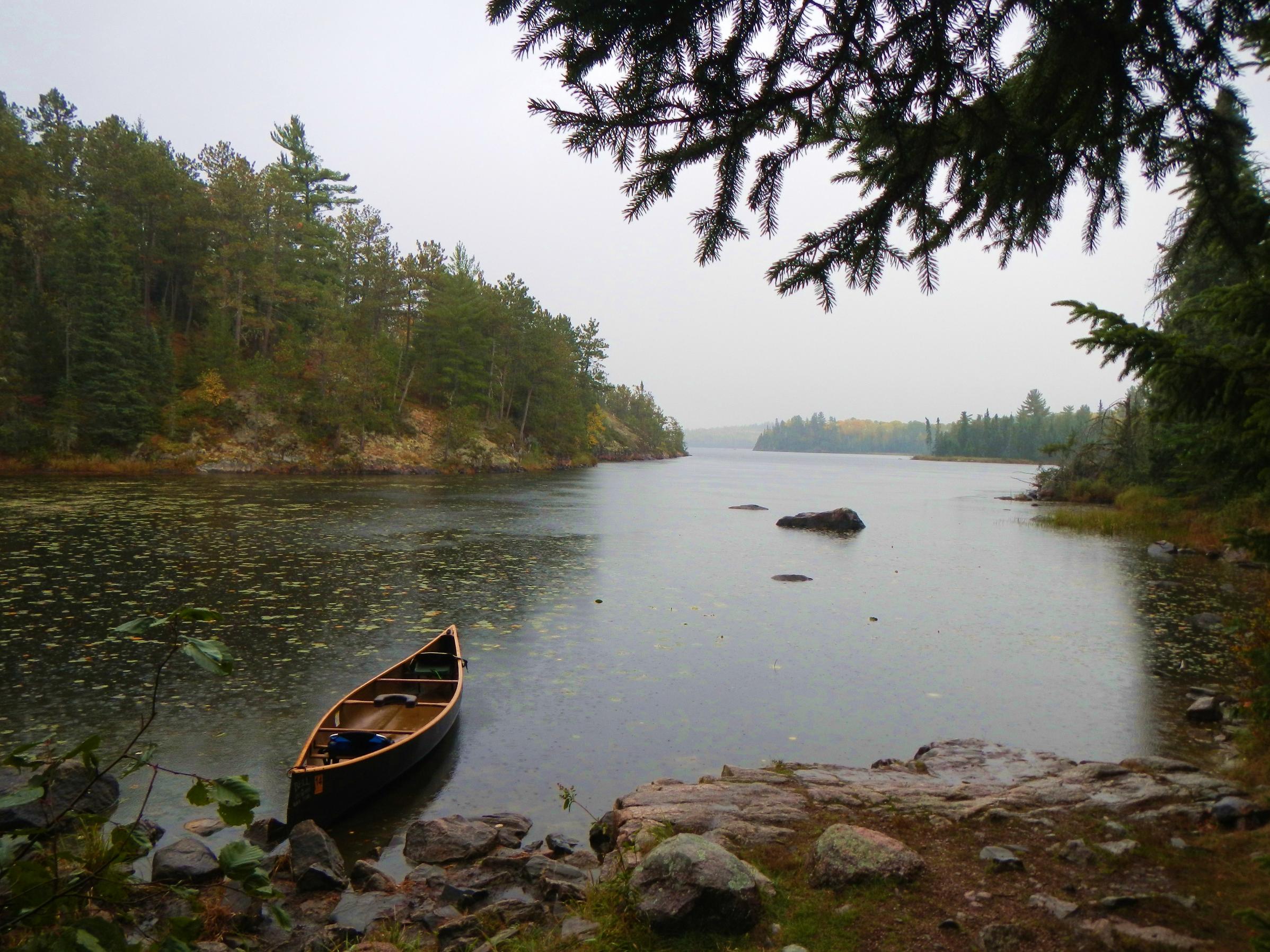 Emerging from the woods to the Fairy Lake landing, we were startled to see the wind had really begun to howl. The only saving grace was that it wasn’t a cross wind. Paddling Fairy was a blur. It was a pins & needles - rain in your face - crossing, so we just kept our heads down & paddles in the water. Providentially; by the time we reached the shores of Gun Lake, we were given a reprieve. It even quit raining half way across. From there it was a misty, though thankfully uneventful, paddle back to our Gull Lake camp.

For supper tonight, we decided to try the Zatarains’ Jambalaya. Since we forgot to buy the Andouille sausage until the drive up - obviously we didn’t have time to freeze it. So, while the pork chops & ribeyes were still frozen, we thought we’d better eat this first. And, since we had an extra sausage link, Vickie figured she could cut up some potatoes & onions and then add the extra left over sausage to it for breakfast tomorrow morning.

The dehydrated shrimp could’ve used a bit more rehydration time, but the total lack of leftovers proved the Jambalaya was, unequivocally, a smashing success. Not long after supper a gentle rain returned; accompanied by a cool north wind, prematurely chasing us to the protective safe haven of the tent where we each read for awhile before officially retiring for the night.