Trip Type: Paddling Canoe
Entry Date: 09/26/2016
Entry & Exit Point: Kawishiwi Lake (EP 37)
Number of Days: 9
Group Size: 1
Discuss Trip: View Discussion Thread (18 messages)
Part 2 of 11
Day 1 – Monday 09-26-16 I awoke to my alarm at 1AM and was quickly ready to roll. I ran into my cousin returning from town as I was pulling out of the driveway. He wished me luck on my trip and I was on the road, excited for a long day of travel. I had originally planned to pick up my entry permit at the Duluth Pack store in Duluth, but a change in my work schedule now required me to pick up my permit at the USFS ranger station in Tofte. I made much quicker time than expected, and arrived at the ranger station at 5:30 AM. I slept in my truck until 7, but realized that the ranger station did not open until 8, so I went back to bed. I eagerly waited at the door and quickly picked up my permit. I was expecting to have to watch the safety video, but was thankfully not required to do so. With permit in hand, I continued to the Kawishiwi Lake entry point, arriving at 9:15.

It had begun to rain over night and rain continued. I was fine with rain, but the wind had picked up out of the west during the morning. West winds were a steady 10-15 MPH with frequent gusts over 25 MPH. I had purchased my BlackLite Northstar Magic at Canoecopia in spring and had over 100 miles under it during the summer on local lakes and rivers, including some rough waters on Green Bay, but the wind and waves coming across Kawishiwi Lake had be concerned. I waited out the conditions, weighing my options, for a half hour. I was eager to paddle and decided to push forward as far as I could. My original plan was to camp on Malberg Lake today, but I knew that was looking less likely.  I fought a tough crosswind across Kawishiwi, dancing across the waves as I quartered into the waves and sheltered behind small islands. Jerry Vandiver’s songs were often stuck in my head. The song of the day was surely, “Headwind.” I was grateful for the reprieve of the calm water as I left Kawishiwi Lake and paddled north towards Square Lake. South of Square, I snuck up on a pair of wood ducks, coming within twenty yards of the drake, enjoying his beauty before jumping the pair. It was here that I saw the first signs of the 2011 Pagami Creek fire. I had purposely chosen a route that would traverse a burn area, excited to see the rebirth of the forest post fire. The forest had a sort of eerie beauty to it. Among the charred remains of logs and stumps, sprouted birch and aspen, thriving in the rich soil and abundant sunlight now available to them. Throughout my trip, I would venture through different stages of post fire forest, enjoying each for their own unique beauty. The west wind across Square pushed me around the corner and I was quickly to the first portage of my journey, a short 26 rods.  It had been my original goal to single portage and really make good time. During my final packing, I realized that the weight of my gear was adding up to a dangerous weight for me to handle on a single portage. I had been physically training hard all year, but had also been researching and seeking advice from others who had embarked on similar journeys to mine. I decided to heed advice of others and not risk injury, particularly on a solo trip. My father’s #3 Duluth Cruiser and my #2 Duluth pack turned out to be a perfect combination both for portaging and trimming the canoe. 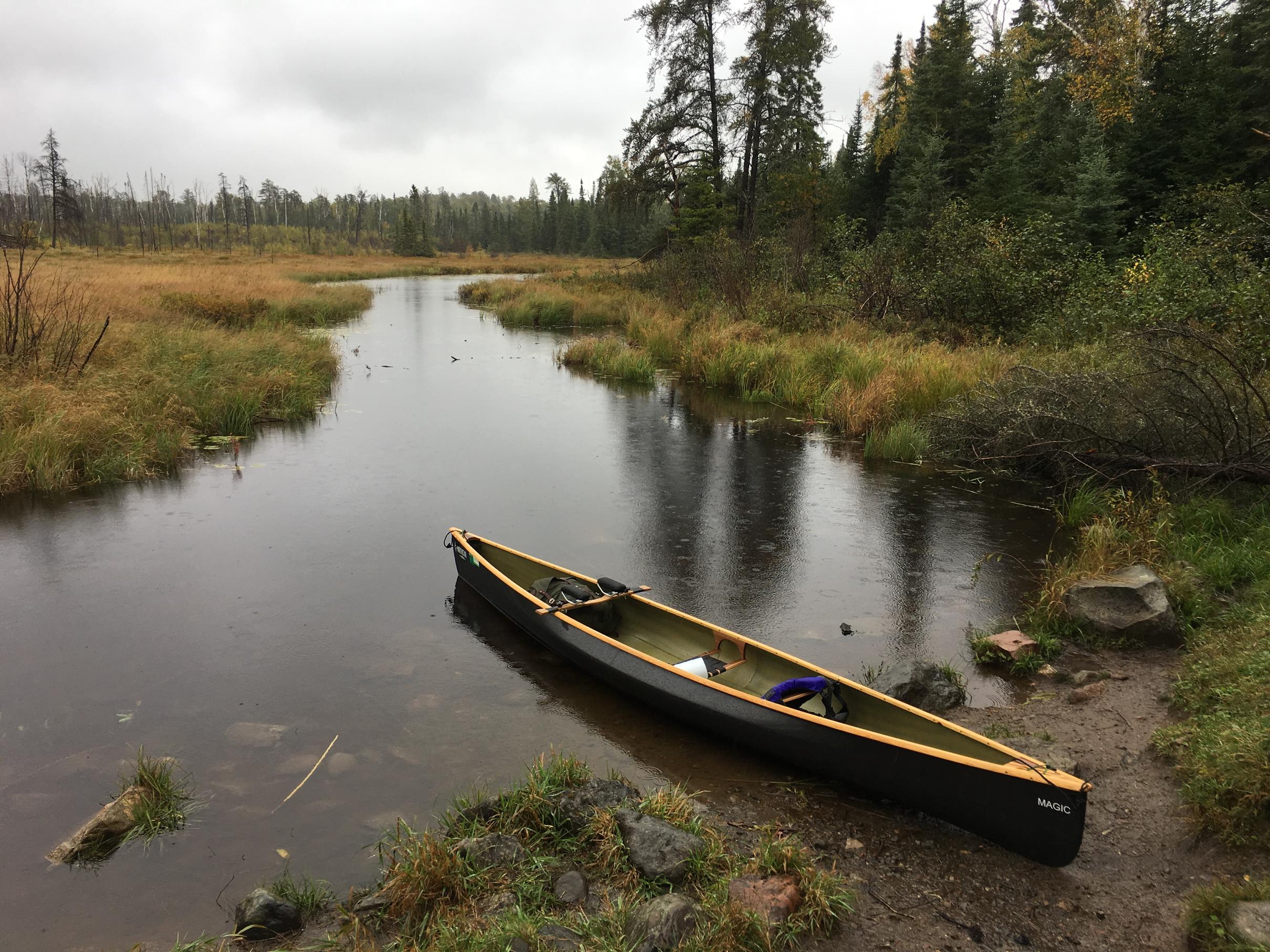 After a quick snack of beef jerky and trail mix, I continued on. The second portage between Square Lake and Kawasachong Lake was not needed due to elevated water levels. I did however have a 20 foot lift over on river right to pass a beaver dam south of Kawasachong. My battle with the west wind continued across Kawasachong and I made my first navigational error of the trip, ending up in a bay towards the Kawishiwi River instead of towards the portage to Townline Lake. I quickly realized my error and corrected my course to the Towline portage.  The portage to Townline was marked as 190 rods, but it seemed much longer than that. Perhaps the Pagami Creek fire had caused the portage to be rerouted, resulting in the now estimated 320 rod portage. On this portage, I began to see what would come to be the greatest benefit of a double portage routine, the walk back. After dropping my first load of my big pack, I made the unloaded return trip for the canoe and smaller pack. It’s amazing what a man misses from the obstructed view under the yoke of a canoe. The seemingly out of place boulders shed by glaciers decades ago highlighted the magic of this place.  I did not foresee the west wind being an issue on the short crossing of Towline Lake, but I failed to take into account the effect of a lack of mature trees due to the fire. The wind blew strong through the now immature forest and I knew that Lake Polly would wisely be my destination for the day. The Polly end of the portage out of Townline was very steep and rocky, but offered a beautiful view up the length of Polly. I also reached the northern reach of the Pagami Creek fire and the forest transitioned again to a mature forest. Here, I met a group of three heading out. They said that they had come from Alice and said that the waves were really rolling there. I would cross Alice later on my trip, but on a day with a much better forecast.  My first stop on Lake Polly was the southwest site 1082. This site was small with no dry tent pads. I hugged the west shore and found my home for the night at site 1078. The site was sheltered by an island to its west and provided at least three tent sites, including a very dry one that was well sheltered. I quickly set up camp and prepared a meal of tacos made of ground beef which I had dehydrated into gravel. The cold, wind driven rain had me in the tent early at 6:00, reading from Sigurd Olson’s Listening Point. I found this book to be very fitting for my journey and drew many similarities from Olson’s experiences and the ones I was living myself. 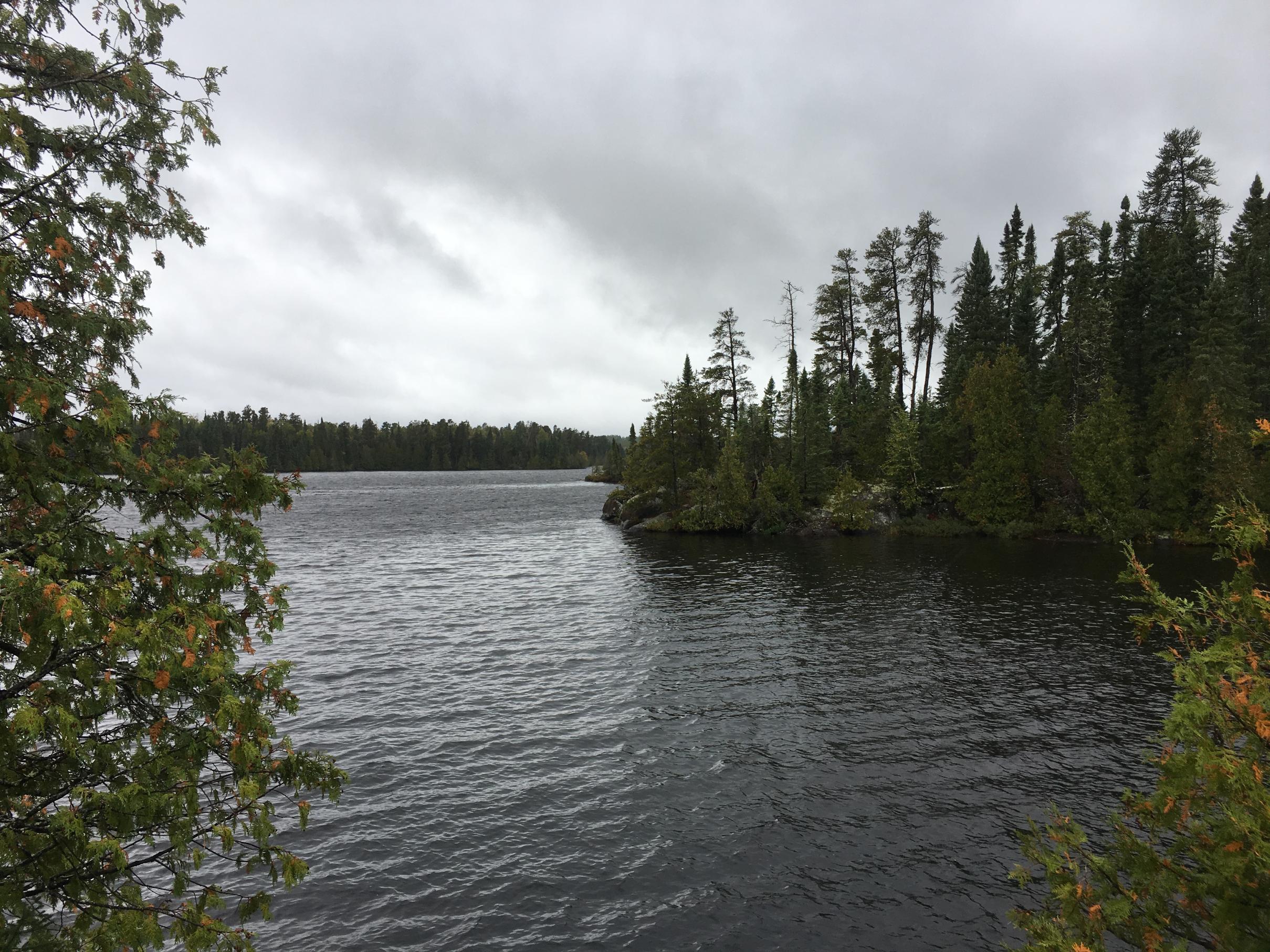