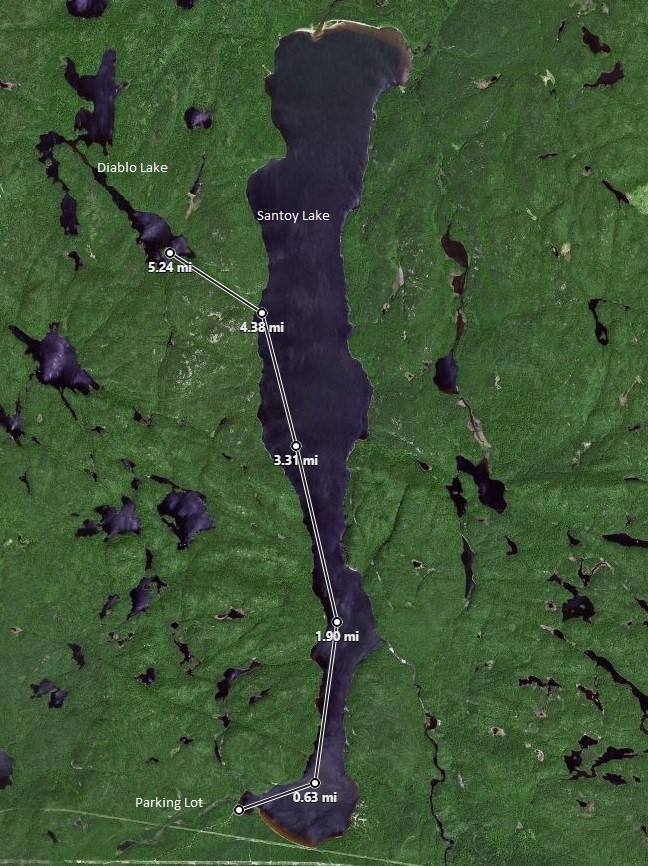 We awoke about 6am on Wednesday morning, and ate breakfast at the hotel’s lounge. After finishing we hit the road for a short drive east to the turnoff for Santoy Lake’s boat launch. The road is unmarked, but it is located just past Jackfish Lake, which is visible on the west side of the hwy. The gravel road to Santoy was in decent condition, and should be passable with any higher clearance vehicle. It does split at one point. The right side follows a power-line which supplies electricity to a few cabins on the south end of the lake. The left-side continues on to the boat launch and parking area for Santoy Lake. There were no cars in the parking lot when we arrived, at about7:30 am. The temperature was a brisk 35 degrees, with a forecasted high in the mid-40s for the day. The rest of the week’s forecast was considerably warmer.
Our first portage of the day was located 6.5 km down Santoy Lake on the west side. We had a slight breeze from the south (which seems to bring in cold weather off of Lake Superior in this area) so we made good time on our journey north. Santoy Lake, like most of this region, is surrounded by large hills with dramatic, steep cliff faces on all sides. This made for a scenic trip to the landing for the portage to Diablo Lake. 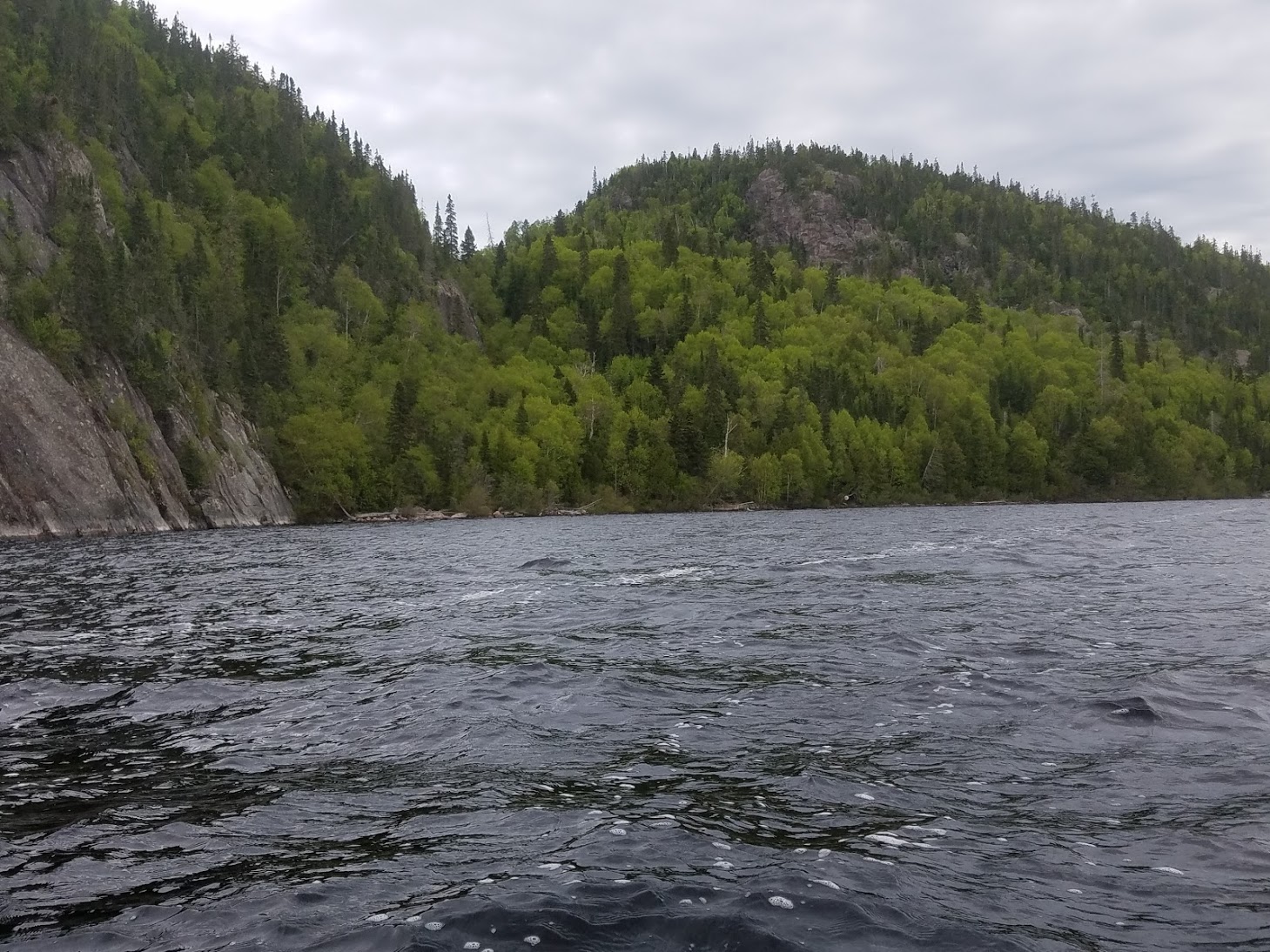 The portage between Santoy and Diablo lakes is sort of infamous in the paddling community, earning it titles such as ‘Hardest portage in Ontario’. I don’t know if it deserves this reputation or not, but it is certainly the most difficult portage I have done. The trail itself rises 300ft of altitude in the first 600 or so ft of length, and as we were fore-warned, this is the easy part of the portage. With this in mind we strapped on our 60lb portage packs and headed up the hill. Immediately it became clear that the past winter’s snow had knocked down brush and trees all over the place, making it difficult to stay on the trail, unmaintained as it is. Although I didn’t struggle too much carrying my pack up the steep hillside, I found myself dreading carrying the canoe up it, having to crawl under and over down trees and weave it through brush leaning in from the side. 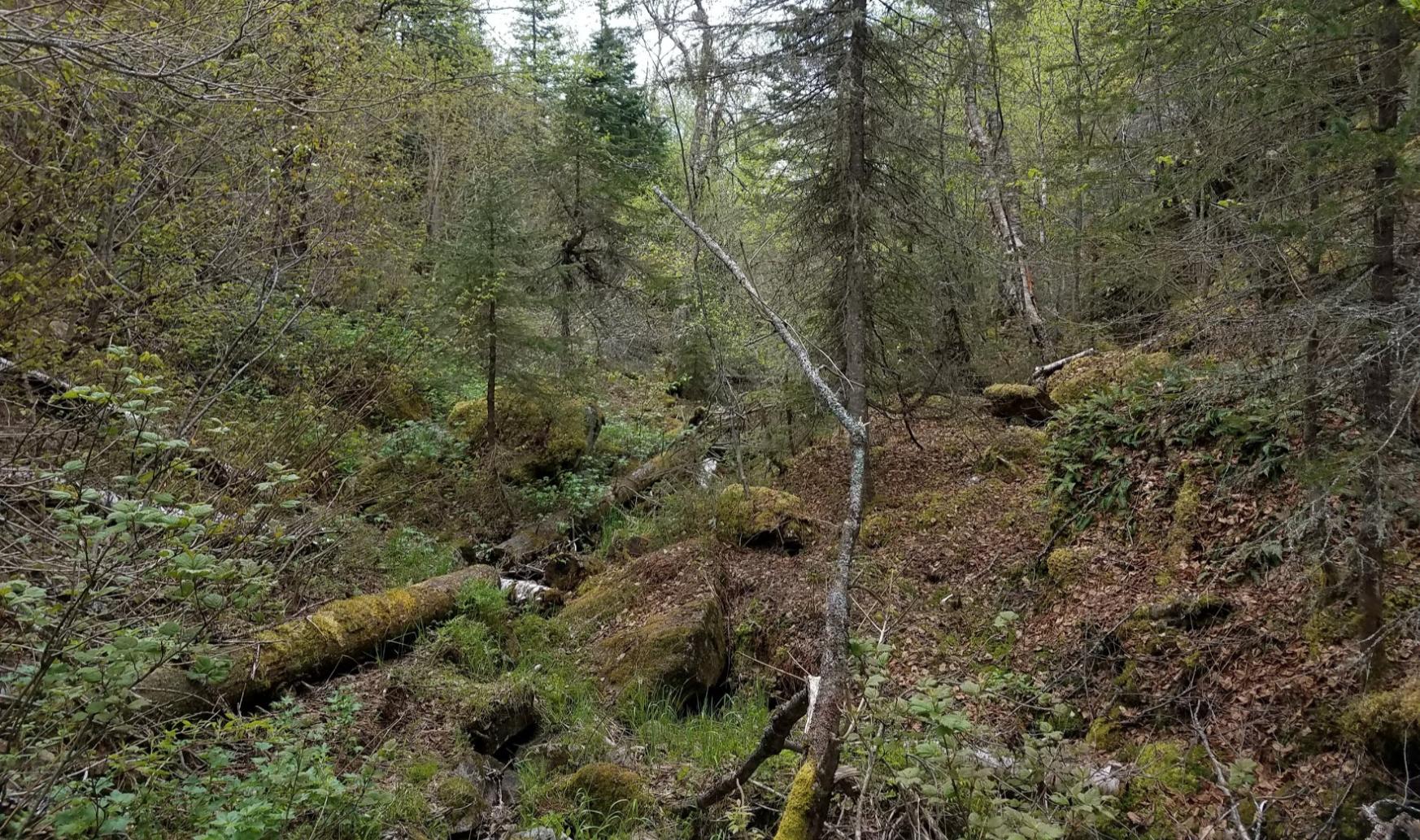 As promised the trail became much worse after the steep portion. The ‘path’ winds through a narrow pass between 2 cliffs that rise a couple hundred feet on either side. Thousands of years of the freeze/thaw cycle have knocked boulders loose from the cliff and deposited them directly on the portage trail. These boulders vary in dimension from basketball size to car sized, with jagged edges and deep crevices between them. To make matters worse, brush and trees were down across the entire portion of this trail, and many of the crevices were hidden under a thin layer of dead grass and leaves. I found myself stepping onto what I presumed was a safe footing, only to fall down crotch deep between rocks, banging my shins in the process. At times I would step through several of these in a row, with brush constantly in my face and sides. Nonetheless, we were happy that we were tackling this portage so early in the season (there was still a little snow and ice hiding on the trail) as in the summer the trail is covered in waste-high ferns, making picking your way through the crevices almost impossible. 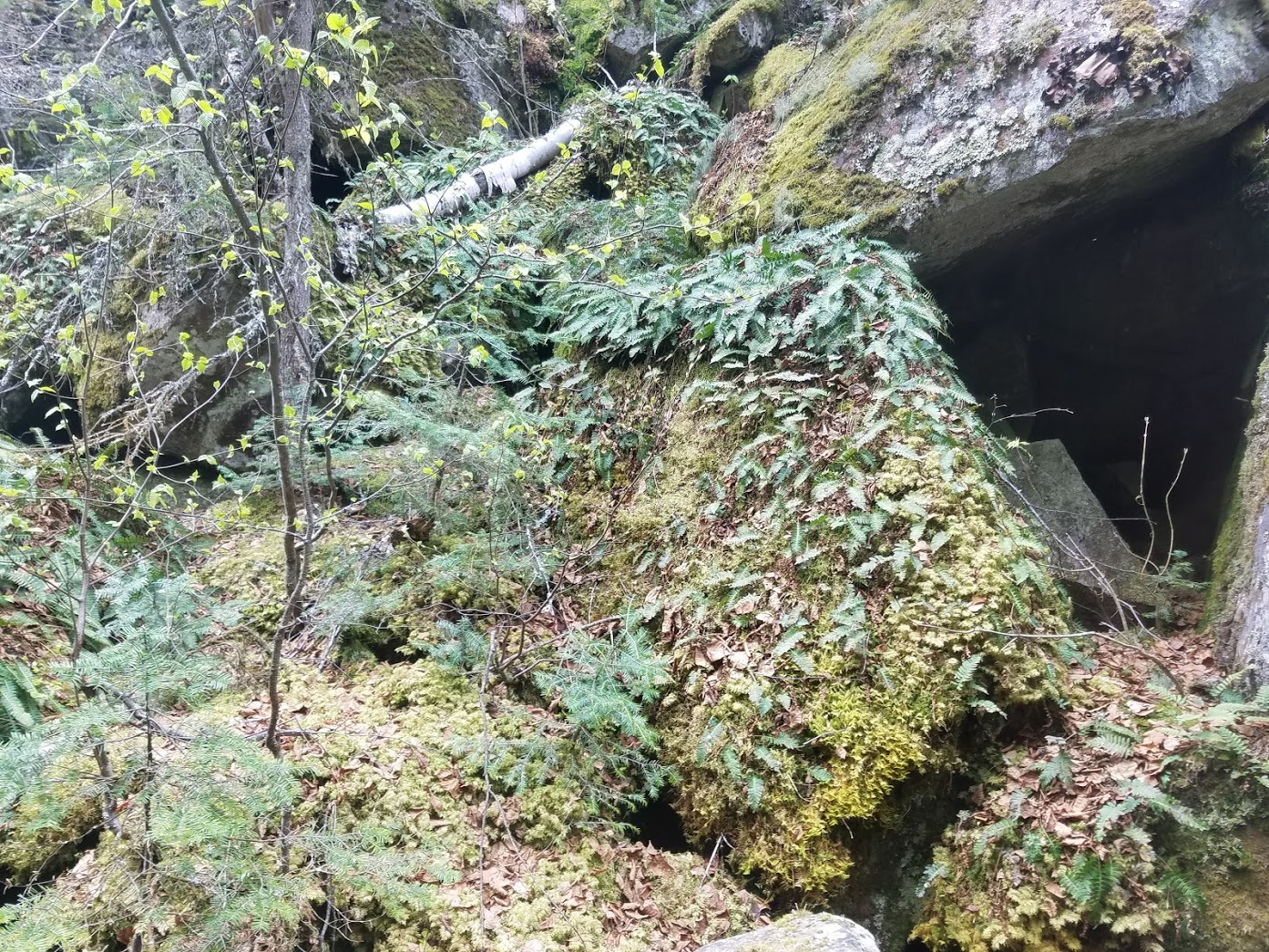 Near the end of the boulder strewn section of the portage are 2 big boulders, with a gap between them just large enough for a person to walk through. This would be fine, save for a large spruce tree laying above the boulders, at about shoulder height. Past here, the last 100m or so of the portage actually resembles a trail! 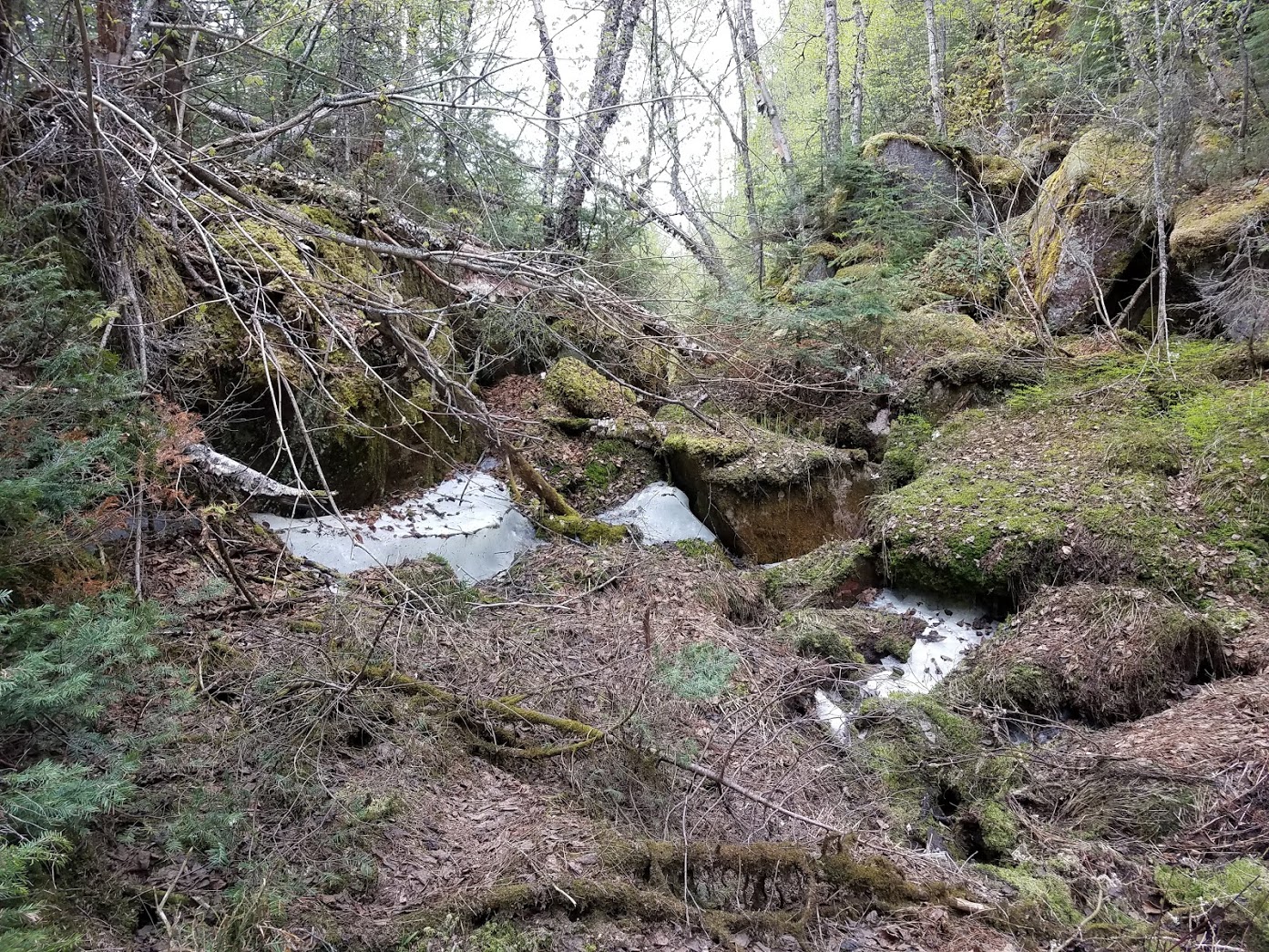 Our packs were finally across the infamous Diablo portage, and it was time to return to Santoy Lake and grab the canoe and a few loose items. While I walked back for the canoe, Bobs grabbed the handsaw and cleared out some of the worst obstacles on the trail. This made the carry with the canoe much easier than it would have been, and we maintained this strategy for most of the portages on the remainder of our trip. All told, we had our 200lbs of gear across the portage in about 1hr 50 minutes. Not bad! It was time to load the canoe and take a short paddle to a campsite on an island in Diablo Lake.
Generally, we aren’t picky about our campsites, and the first campsite on Diablo would suit us fine. I suppose by BWCA standards, it would rate a 2.5-3.0. It’s only major flaw was the lack of a decent landing, which would find me up to my neck in water later in the day. There aren’t a lot of big trees on the island either, so it took a bit of work to find 2 suitable places to hang our hammocks for the night. 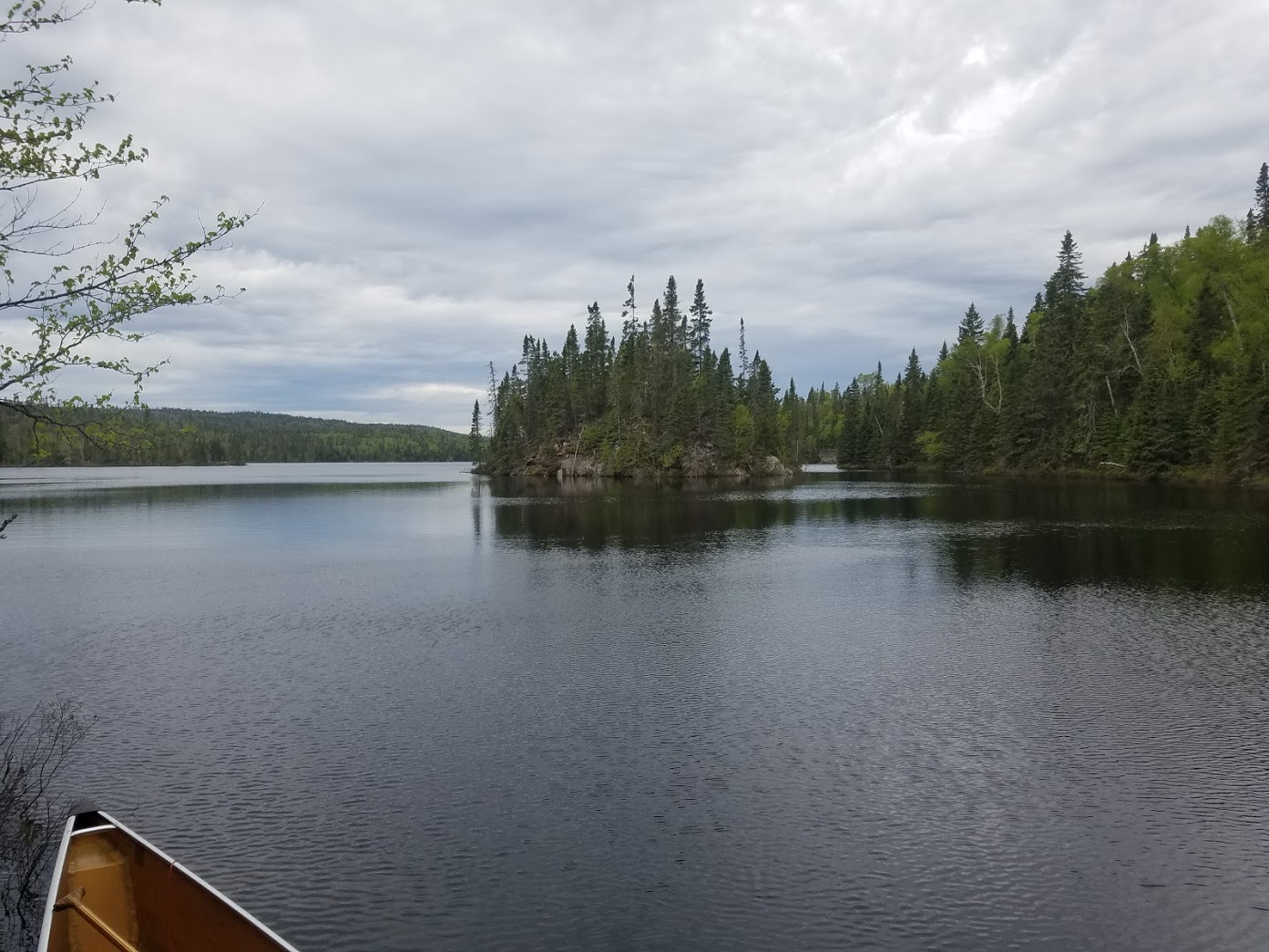 Once camp was setup we made a quick lunch (pho noodle soup) and decided to hit the water and do a little brook trout fishing. It didn’t take us too long to get a few bites, and land a couple of trout. I trolled a line down the lake while paddling stern and Bobs cast spinners, working the shoreline as we travelled. Just before the narrows on the lake, I saw some motion on the eastern shoreline, and noticed a small moose calf running startled towards the woods. A few seconds later we heard a much larger moose (mom, I presume) running alongside it. There was a steep cliff a few feet in from shore, so they weren’t able to retreat far from shore for quite a while.
A few hundred feet from the moose siting, we were surprised to see a small cabin on the west shoreline of the lake. It wasn’t fancy by any means, but it did appear to be maintained.
We continued paddling down the lake, and it began to rain off and on. It never really down poured, but we were fairly wet and the temperature was in the 40s. With 2 trout in the boat we decided it was time to head back, dry off, and eat some dinner.
After dinner (trout in some sort of ginger-flavored sauce) we sat around the campfire for a bit, but turned into our hammocks fairly early due to the rain. It isn’t truly dark until 11pm, so it took quite a while to fall asleep. It occurred to me that had we been hell-bound on completing the route on a short schedule, we could have continued on to the next lake after a short lunch break. The Diablo portage was exhausting, but not necessarily so bad that it shuts you down for the rest of the day.