I woke up and got a few pictures from the campsite. The bugs were a little better and continued to subside as the sun came up higher and higher. We had an awesome breakfast of hash browns, eggs (3 each), coffee, and bread (we couldn’t really figure out how to make toast). We cleaned the dishes, packed up camp, and got a fairly late start on the lake (but we knew we had a short day). The wind was up a bit, and the waves made us quite unstable. We just had to make it across Jackfish Bay to reach a channel that would take us to our next lake. The wake of a few motorized fishing boats in combination with the wind gave us a few close calls in terms of tipping, but we made it to the protected channel dry and happy.

On the first short portage along the channel, Matt’s sandal disintegrated in the mud. Major bummer. Matt was not in a good mood by the time we got to and across Sandpit Lake. The portage from Sandpit to Tin Can Mike Lakes was a bit longer than I had anticipated, but it was in pretty good condition. By the time we got to the landing at Tin Can Mike Lake, there was a larger group just taking off (we could hear them and their aluminum canoes from a portage away). We took our time getting the rest of our gear and stopped to have another simple lunch in the shade on the portage trail. We got back on the lake, filled our water containers, and found our recommended camp site fairly quickly.

This was a beautiful site, and a lot less buggy. We got the tent set up away from the bush (in hopes of avoiding bugs at night), hung the food pack, and Matt started on the fire. With the fire going, we each took a dip in succession. It wasn't a great site for swimming as the visibility was pretty low, and the rocks were covered with a slippery algae. It enabled us to get rinsed off and cooled off at least. We had a great dinner of mashed potatoes, corn, and bratwursts. We boiled water all day long on the fire and used some of it to clean our dishes. We went out on the canoe for another water run before the sun went down, and it was beautiful. I could tell that it was getting too cloudy for any useful photography at night, and I went to bed within an hour or so of Matt retiring (and complaining…). 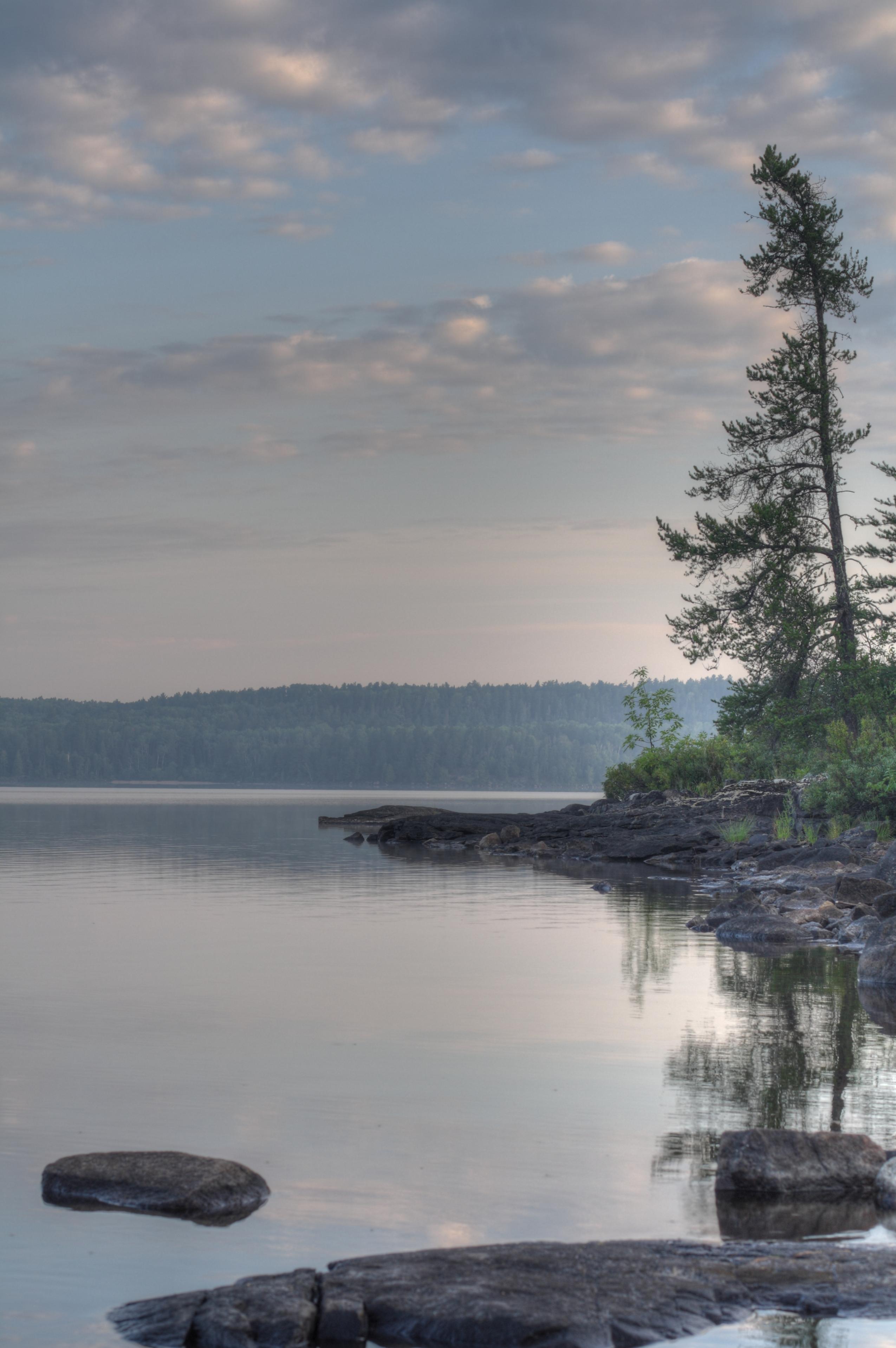 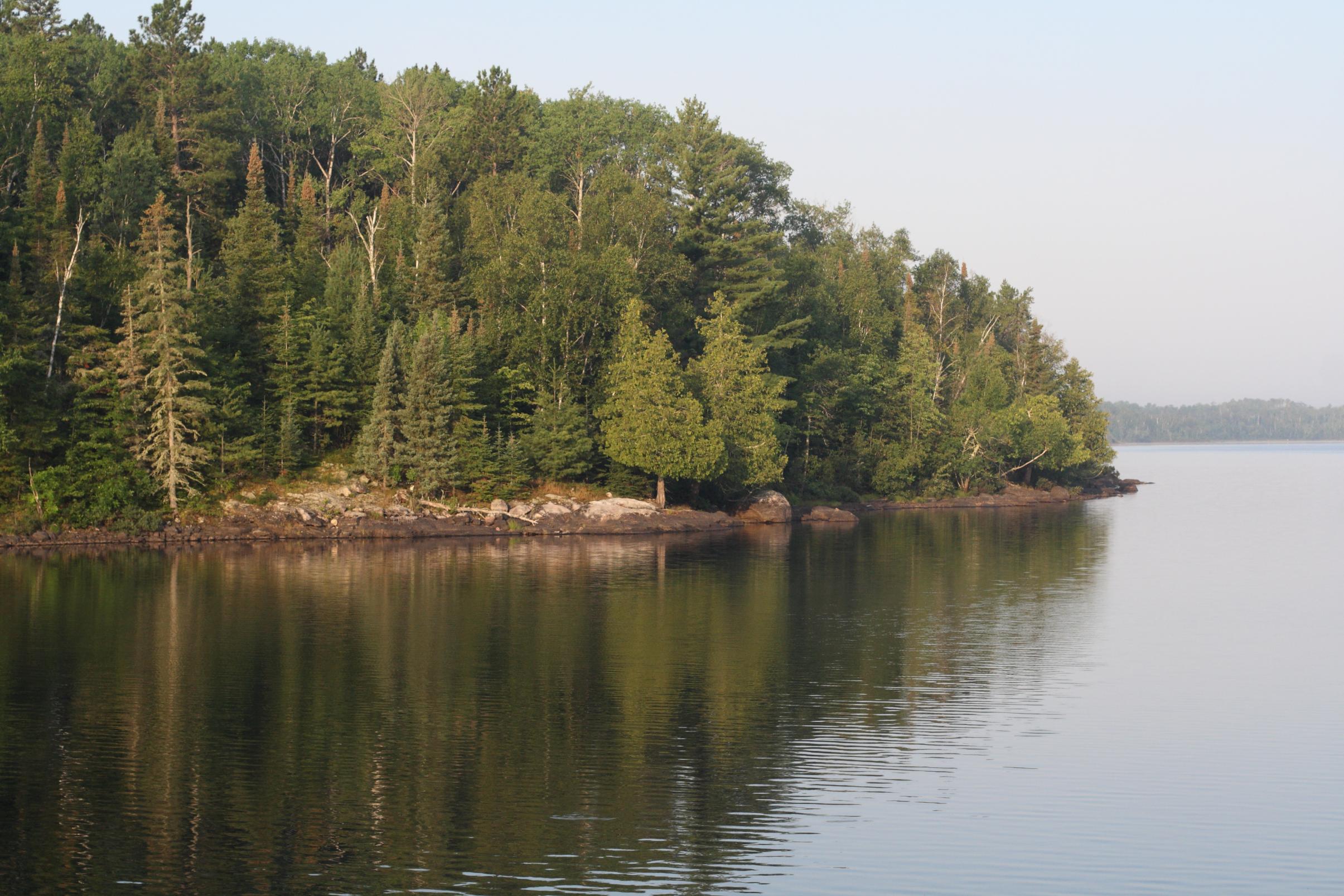 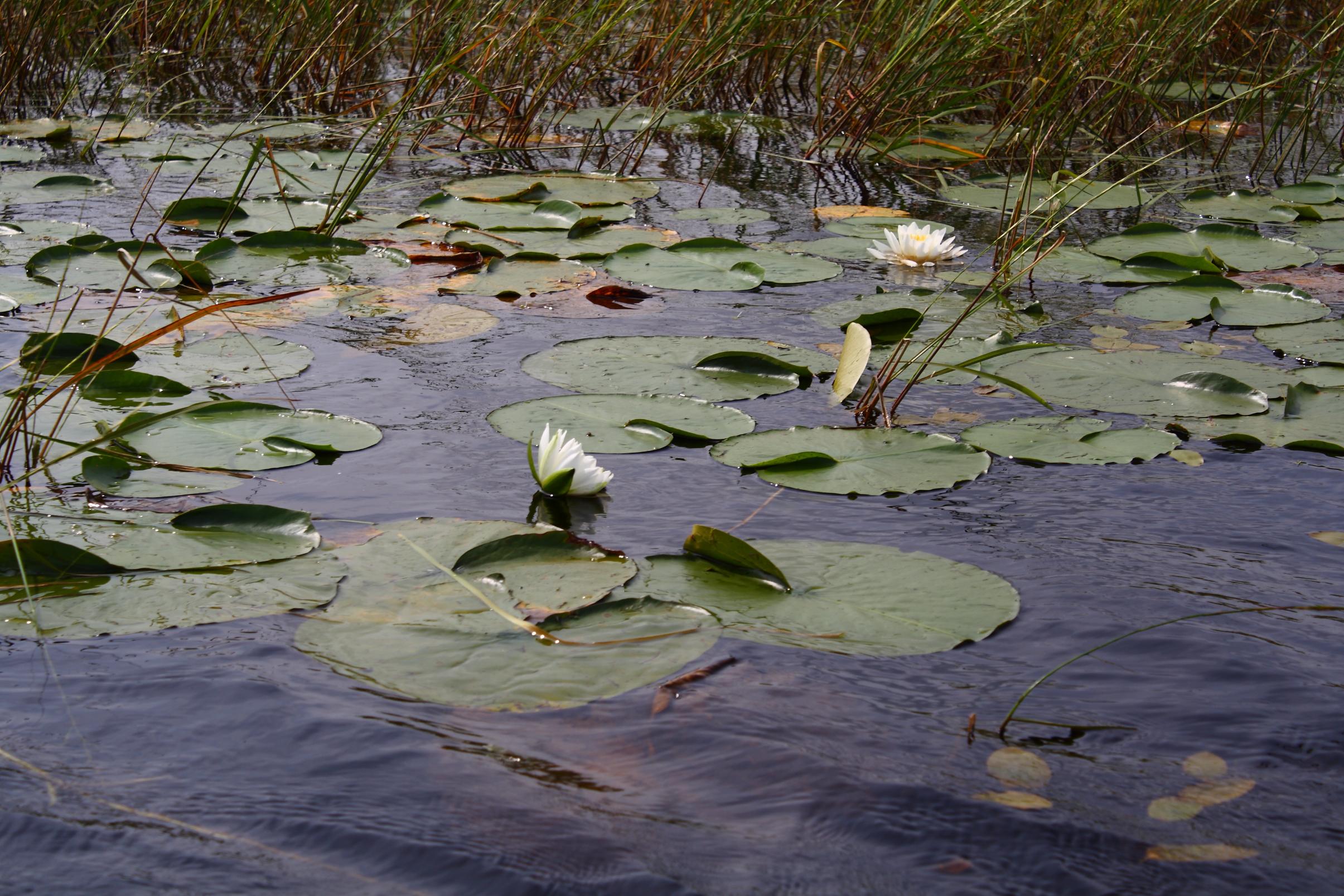 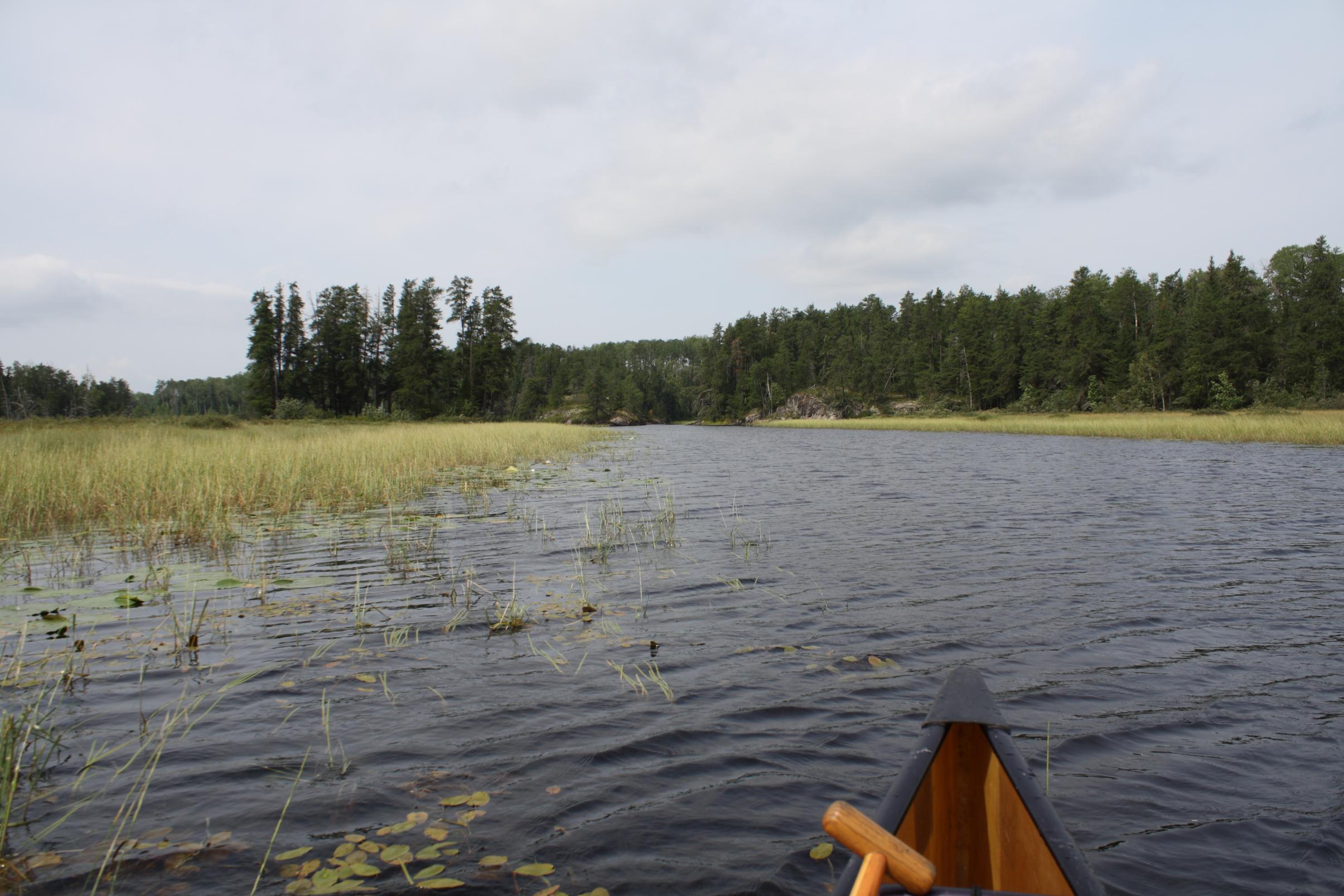 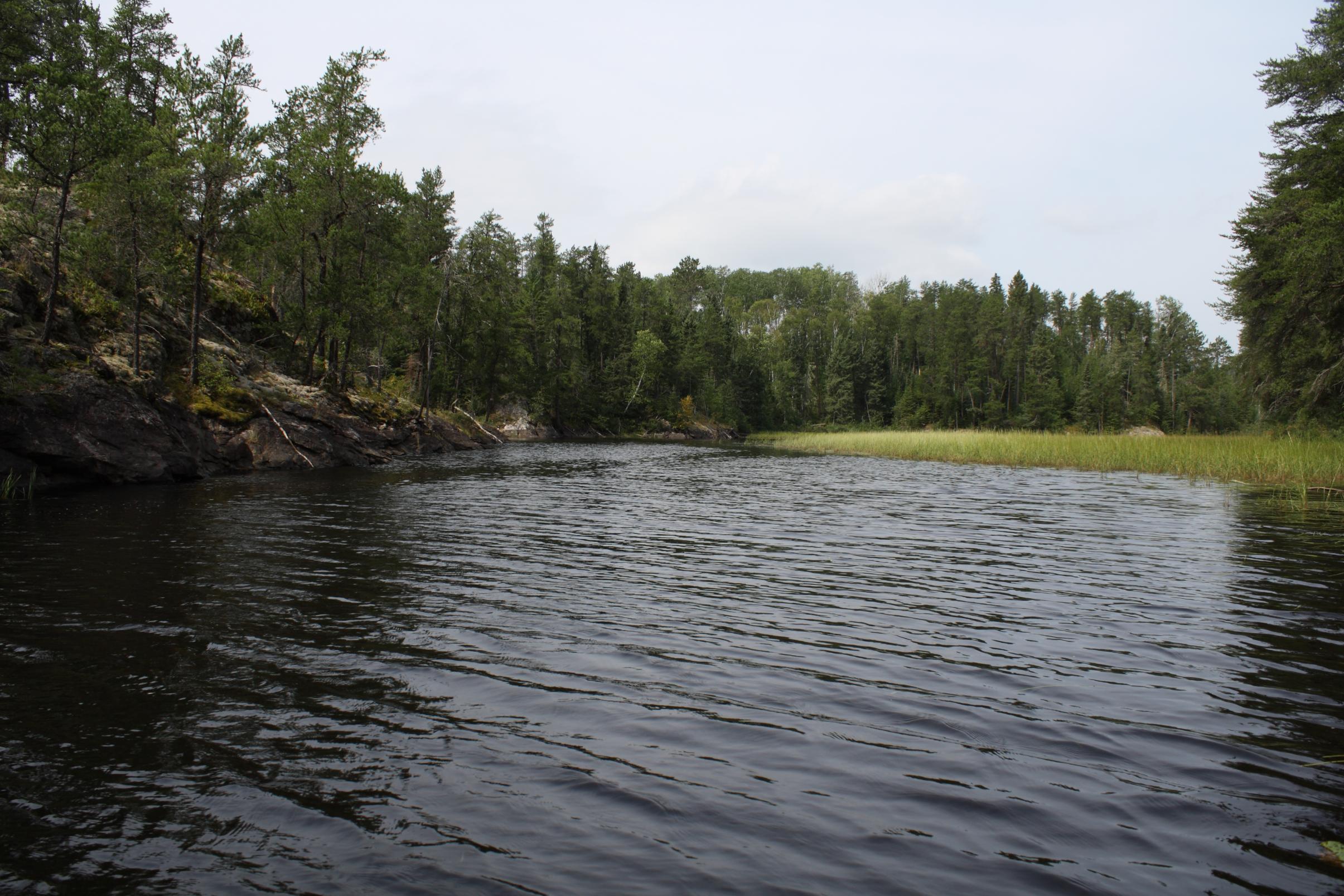 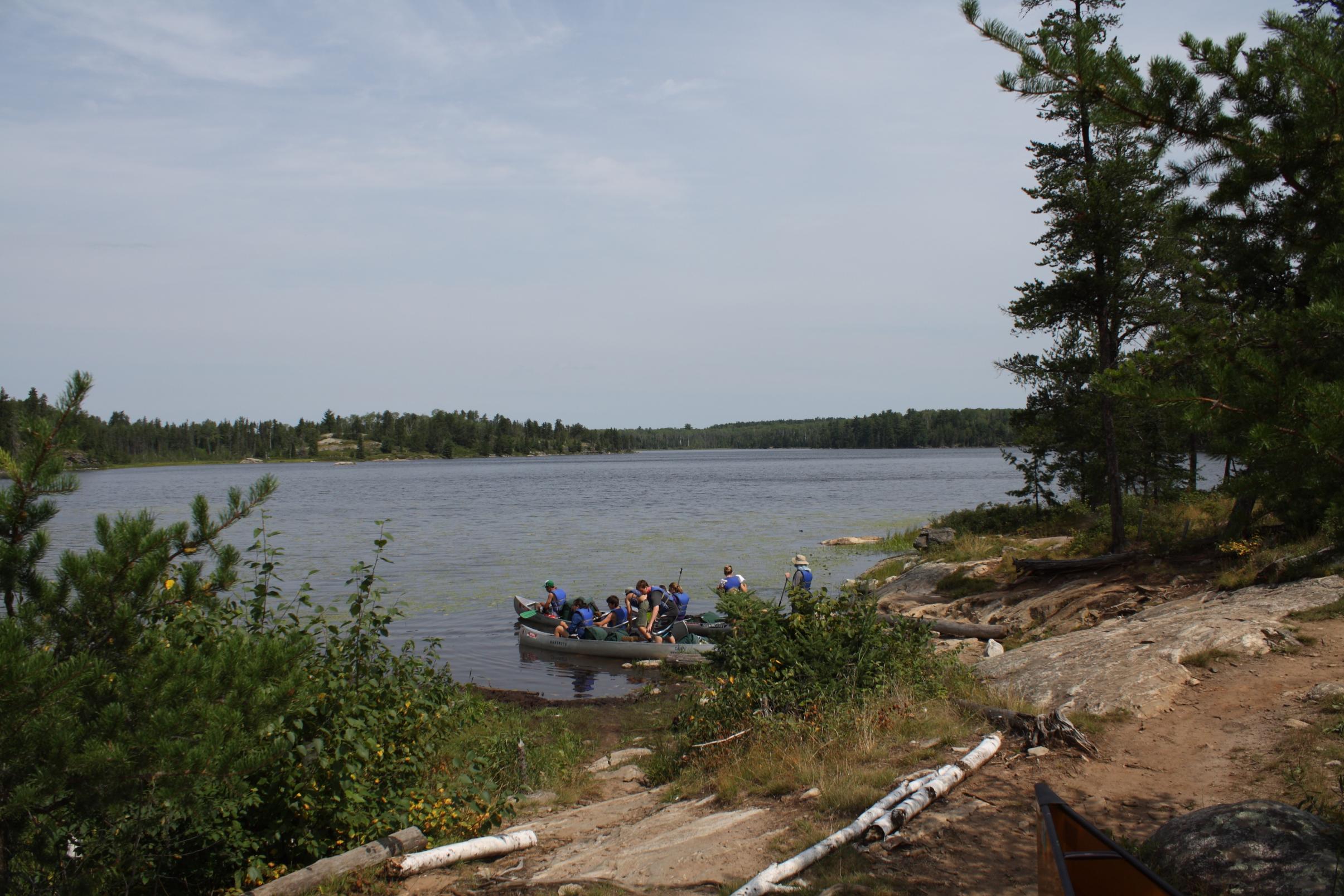 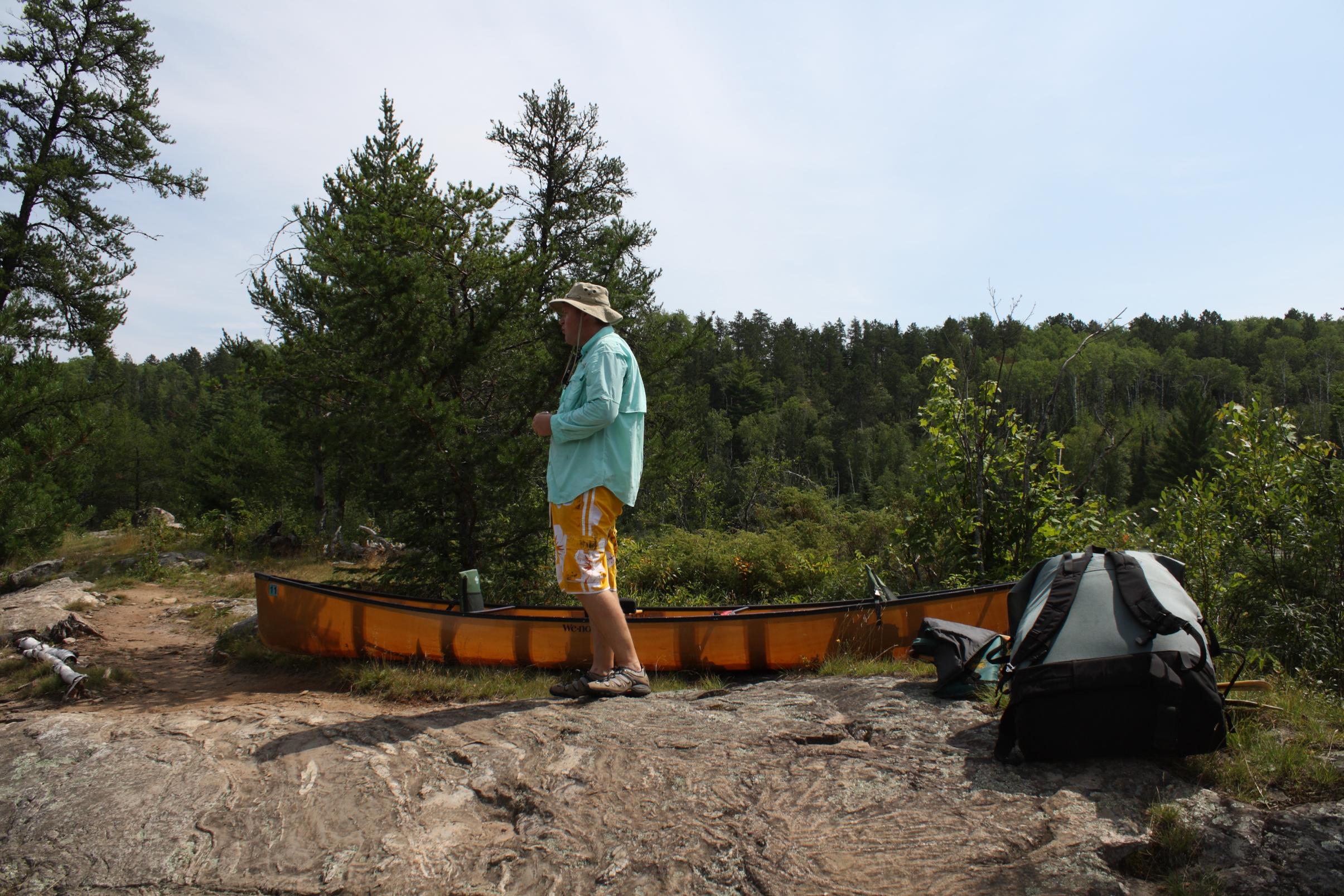 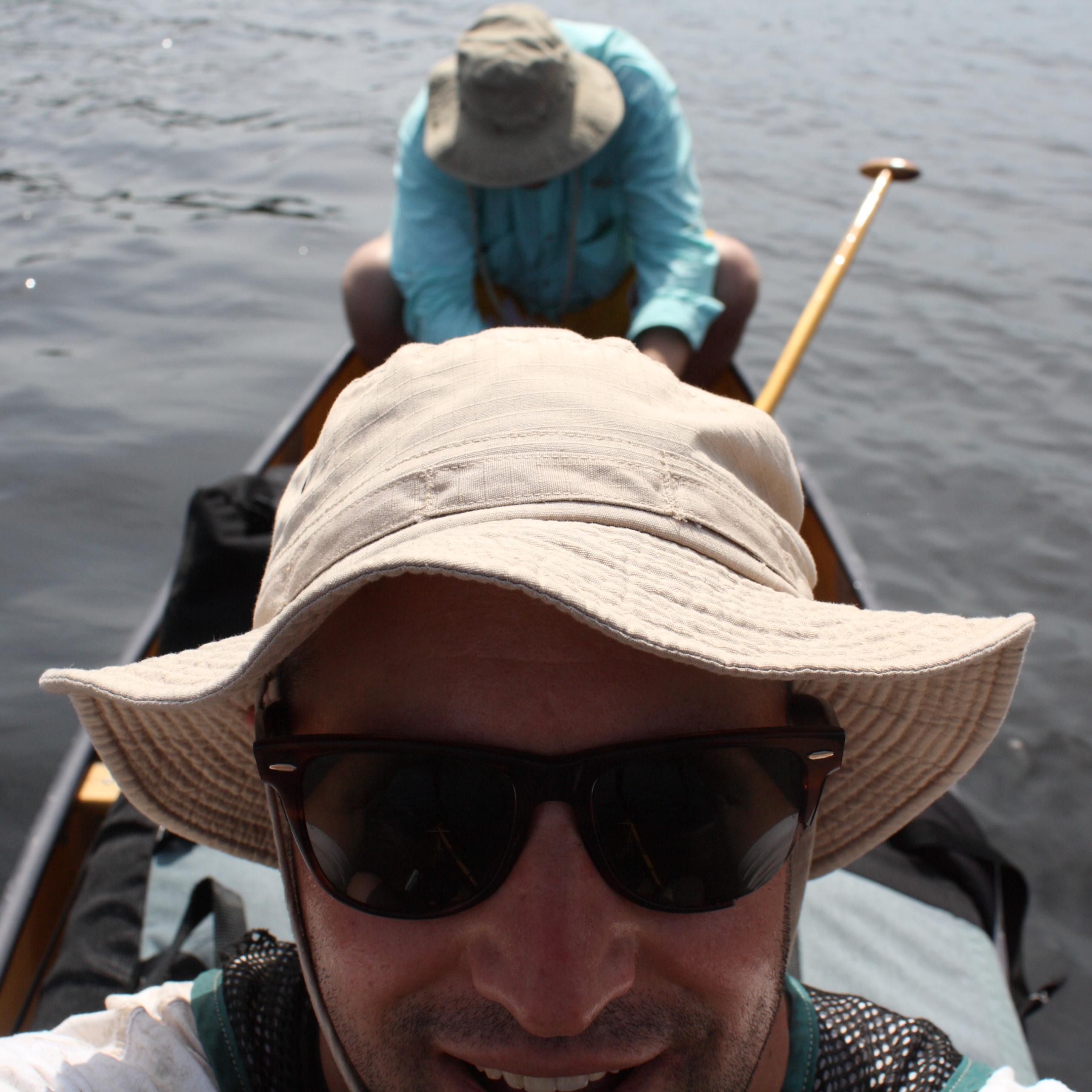 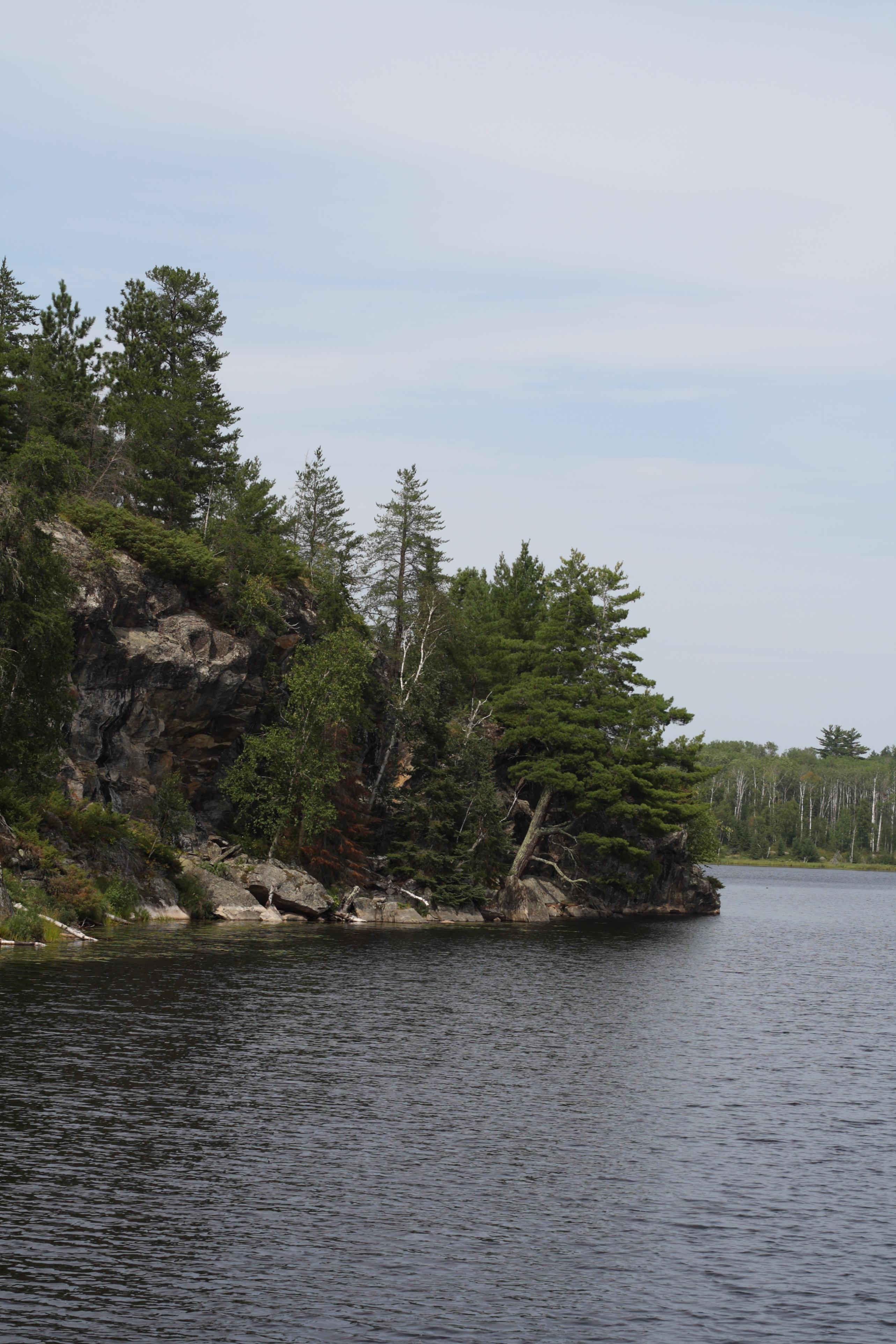 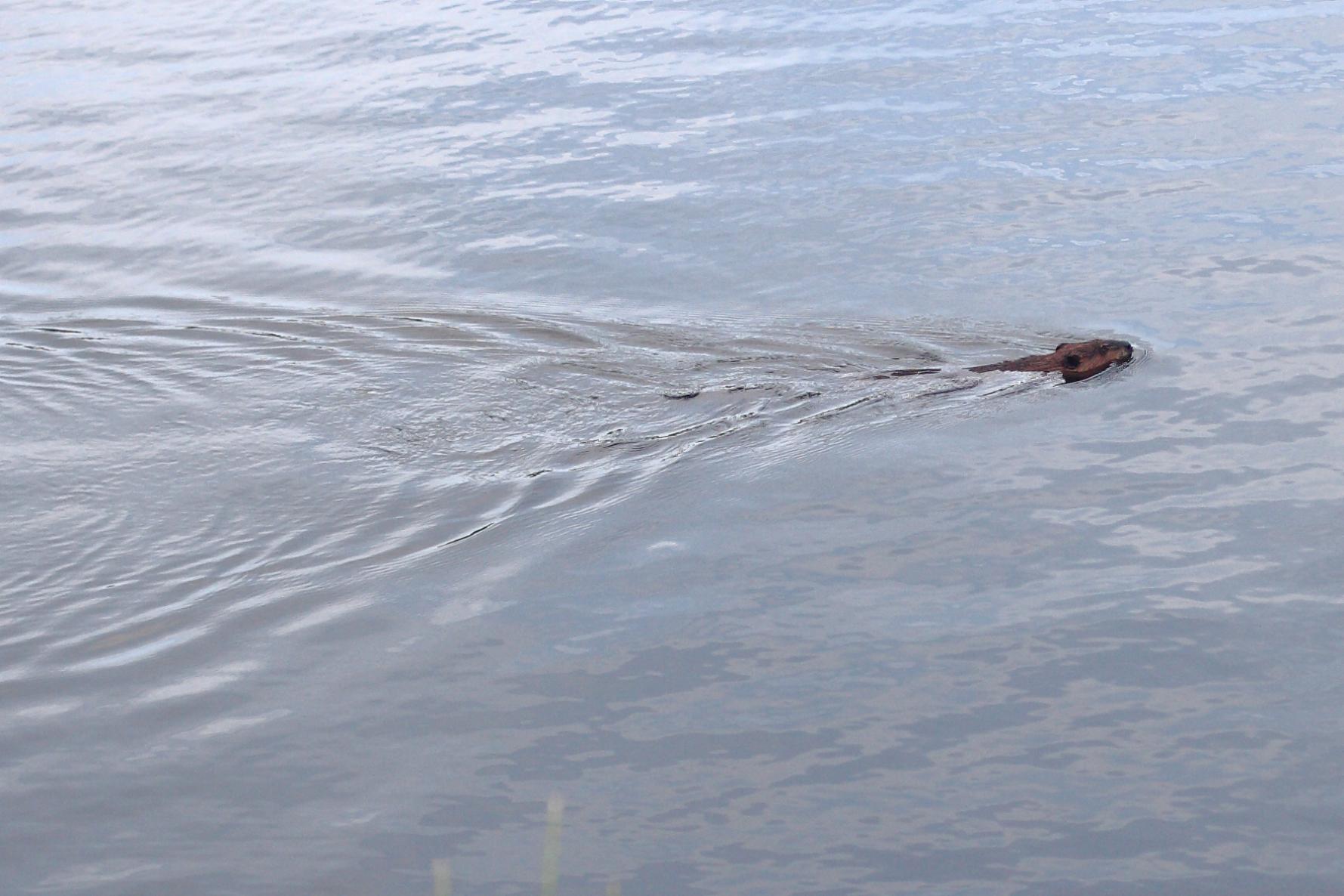 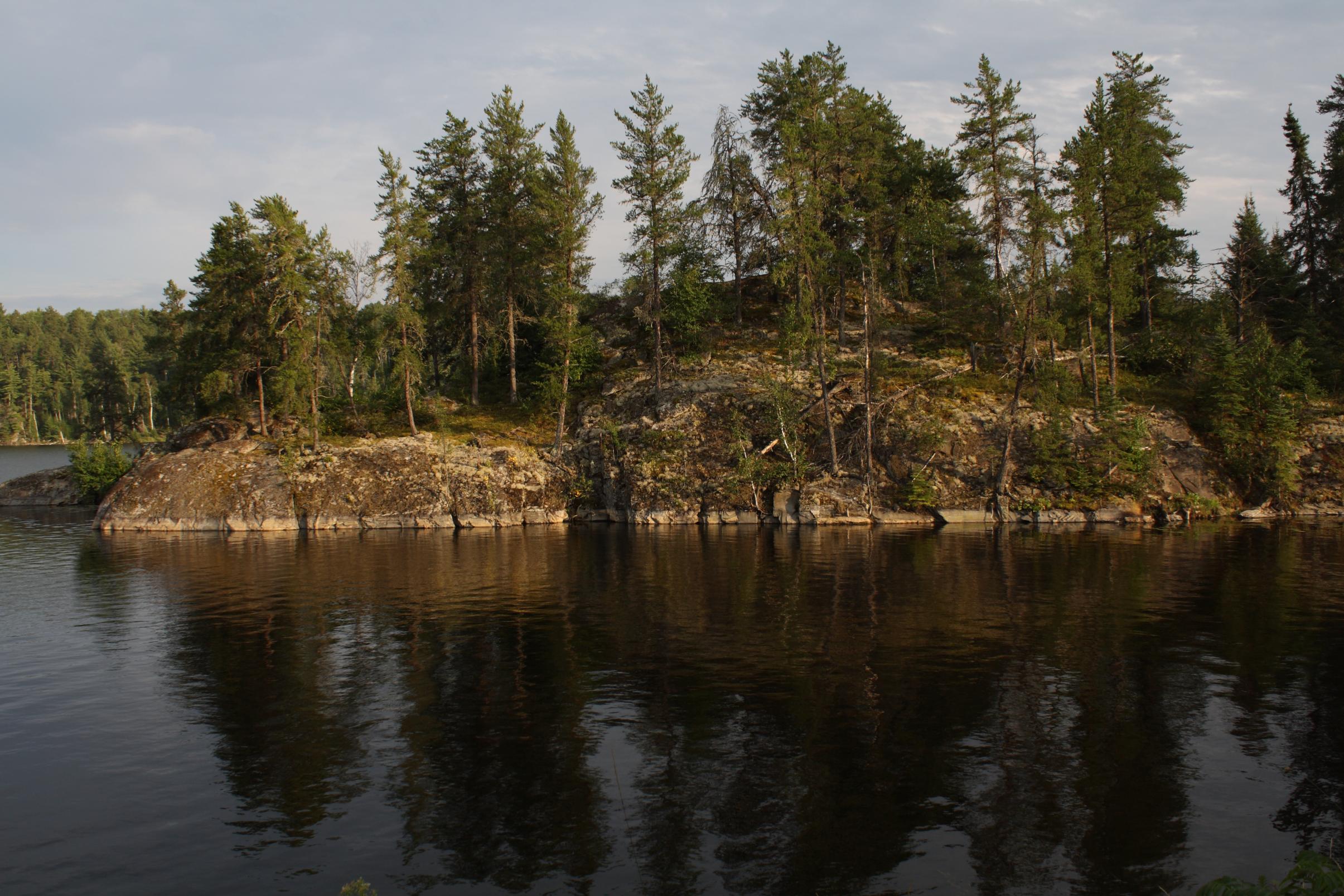 Continue to Part 5
Back to Trip Report Main Menu