Anyone been through the Chub River lately? Any report on water levels. I am trying to add some new territory/lakes to my list and looking at exiting that route to Flying Lake (Brant Lake) rather than Bat and Green to Flying Lake.

Any other reason to avoid those routes and go out through Tuscarora instead?
Reply    Reply with Quote    Print Top Bottom Previous Next
cowdoc

Fay to Flying can be hard to find.....and if you miss it, it can be a real mess getting down through to the Bingshick portage to get to Flying. Fay to Flying does not start on Fay....but up in the creek a ways. I told Kiporby about it a couple years ago.....he found the landing, but then missed a right turn somewhere and took a pseudo portage that paralleled the Chub and hit the Bingshick portage. He said it was a nightmare. The portage I took from the Fay/creek landing went right to Flying.....however, I had been doing it from Flying to Fay so I missed the fatal fork. I did not think the actual portage was to bad.....muddy at the Chub. The pseudo portage was a flooded, mud fest.....the beavers have that area really messed up. I think I may have marked something in the maps section to mark Fay to Flying....ill double check.

"What could happen?"
Reply    Reply with Quote    Print Top Bottom Previous Next
WhiteWolf

ok....I did not mark the maps section cuz someone else had. The green dot is where the portage starts and it finishes about where the yellow portage line hits Flying. After you leave the river, you have to be looking to head south more.....not parallel the river. It skirts along the edge of a big hill through a fairly open, burn area,( but that was a few years ago and may be grown up more) ......noticeable on Google Maps.

"What could happen?"
Reply    Reply with Quote    Print Top Bottom Previous Next
cowdoc

I added 4 green dots.....connect the dots to approximate the true Fay to Flying portage.

"What could happen?"
Reply    Reply with Quote    Print Top Bottom Previous Next
cowdoc

"What could happen?"
Reply    Reply with Quote    Print Top Bottom Previous Next
straighthairedcurly

My son did the the portage from Flying to Fay so I don't have info for finding the landing from the other direction, but sounds like cowdoc has that covered. However, he felt the portage was longer than marked on the map, and it took a lot of twists and turn and was in pretty rough shape since not many people go that way.
Reply    Reply with Quote    Print Top Bottom Previous Next
Voyager

I'm unsure of whether you'll be traveling through War Club Lake, but my old Beymer guide book says that lake can be unpassable in a dry year.
Reply    Reply with Quote    Print Top Bottom Previous Next
holscherer
08/12/2021 06:54PM

Brief summary for going from French to Round via Chub River, Flying, Gotter if anyone is interested.
It's been a few years and I'm sure water levels are way lower so some portages will be longer and muddier but some may be dried up and more pleasant.
French to Seahorse. Slight uphill alongside a little cascading waterfall. Easy portage mostly. Seahorse should have decent water but there were some floating bogs in west end near portage that may have settled in weird places due to low water. "Seahorse"

On the east end, the approach to the Warclub portage may be lengthened with low water and there are alot of ankle rolling rocks and a beaver dam to lift over to get into Warclub.

Warclub to Fay. I'm sure this one will get longer and muddier. Just a flat walk along the river. The Fay end is a bad rock garden. "Warclub end of Warclub to Fay"

Fay to Flying. Has been discussed earlier. Map on this site has portage on SE side of Fay.....instead, paddle the creek out the NE side of Fay around the bend and look for the muddy landing on the south side.

This may be a messy section if water is super low.
Flying will be good water all the way down to the staircase portage. I've seen the last step under water and Ive seen a decent gravel landing out from steps.

Flying to Gotter. Once you're up the steps you portage along a canal on the west side of Gotter. There are multiple landings along the canal depending on water levels.

The east side of Gotter leading to the portage to Brant can be a mud fest in a decent year. I'm sure it will be mud a long ways out.

Gotter to Brant is uphill, rocky.....flat and decent on top.....downhill and rocky to Brant.
Brant to Edith is flat and easy. Edith to West Round has some board walks that I suspect are dry. West Round to Round has been flooded by beavers and had boardwalks....some floating.....but I suspect there will be less water and more mud.

Wow! Thank you for the details, Cowdoc. We were planning to take this route from Little Sag to Sea Gull. Now I'm pondering going up through Gabi, Ogish, Alpine, etc.

Since you seem to know the area really well, I'm wondering if you can predict what Kek Ponds would be like. Everyone seems to have different opinions about that area and you seem to be more objective. :)
Reply    Reply with Quote    Print Top Bottom Previous Next
cowdoc

Been through Eddy and Jenny but not Kek ponds....sorry. That may change come September. Gabi, Agamok, Ogish is a nice route Also. Make sure to take a break and take a small detour to go see Mueller Falls. 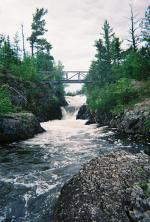 Well then, I guess I'll let you know how the ponds are cowdoc!
Reply    Reply with Quote    Print Top Bottom Previous Next