Crab Lake: A Jewel
by Boppa

Trip Type: Paddling Canoe
Entry Date: 08/26/2007
Entry & Exit Point: Crab Lake and Cummings from Burntside Lake (EP 4)
Number of Days: 6
Group Size: 2
Trip Introduction:
PROLOGUE - This was a return trip for us to the BWCA via Ely and North Country Canoe Outfitters, although this trip was just 2 of us (wife and me; our son and daughter-in-law were home with a new baby). The drive from the airport brought remembered sights and went quickly. Once at NCCO, we reconnected with owners John & Kathy. After watching the film (seemed better this year?), we went over our route in detail with John who provided his expertise on sites, portage info and fishing. Then it was off to Ely where we stopped at The Great Outdoors for an introduction to leeches and to thank Jim for much good advice found on this site. Jim was out but Brian was a great help. Being a former New Englander, he recognized my adversion to hooking leeches and explained that I (still living in New England)was used to a different species (blood suckers). Brian gave a demo on leech hooking technique and then I gave it a try; I left feeling not quite proficient but at least I had an idea of how to handle the bait. Next stop was to Mike's where we picked up our beverages in plastic containers. Dan helped us again this year and asked if we were in town for the Blues Festival. Bette remarked since I was spending so much time in the bourbon aisle, tapping my foot, it was a natural assumption. After leaving Mike's, we headed to the Ely Steakhouse (our 1st visit). Mike was the host and led us to the bar where we waited for a table. We were seated within 20 minutes (not bad for a Saturday night) and had a terrific prime rib dinner - generous portions and nicely done. Then it was back to our cabin where our packs were waiting. Mitch and Jessie had done a great job with equipment and food. All packed and ready, we took a walk to the lake to enjoy a nightcap and the sounds of loons.
Day 1 of 6
Sunday, August 26, 2007 - A beautiful, sunny, cool and calm morning. We were in the van, headed to Burntside Lake, before 7:00 AM. John had remembered my request for a Wenonah Boundary Water canoe. We put in at the public boat launch and headed across the lake to the Crab Lake portage. We were about 1/2 way across when Bette and I had our 1st differing opinion on which direction to take, when a passing motor boat with 2 fishermen cordially pointed us in the right direction to the portage. Big lakes, and Burntside is a very big lake by Connecticut standards, are not my forte. After paddling in the direction indicated and following the landmarks John had provided, we were having our 2nd difference of opinion on direction when we heard hammering coming from a cabin on a small island. We pulled up along side the shore and politely asked for directions to the portage entrance. The owners came down to talk with us and also offer coffee. We spent 5 minutes chatting with them, learning they were retired from Yonkers, NY and were fixing up the cabin, a summer retreat. They pointed us to the portage entrance, not 500 yards away - very visible, with a portage sign! It helps to be looking in the right direction.

We quickly unloaded and began the trek. It has grown to 420 rods (latest Fisher map)and while not tough, the beginning requires your attention; the 2nd half is just a walk (a long walk) in the woods. We doubled portaged and were done in under 2 hours. Once on Crab Lake, we headed for an arm of the lake where John had identified a site he thought we would like. On the way, we noted that the first 2 sites we passed were occupied. We found the site John had marked on our map and decided to spend the night. We had originally intended to get to Little Crab on Day 1 but this was a great site; it fit us perfectly, with good views and privacy. Also, truth be told, we were tired and ready to relax. We found a great landing area and were soon ashore and setting up camp. Our first night dinner was a tasty stove cooked steak (fire ban was in effect), along with bourbon for me and chardonnay for Bette, while we reflected on a wonderful day 1.

The winds had grown stronger during the day but nothing we have not experienced. That night however, I did wake up around midnight to a howling wind. I guess I let my imagination run a bit wild because I got up and put on my pants and shoes, made sure Bet's pants/shoes were handy (she slept through the whole experience)and sat in the darkness of the tent listening for cracking tree limbs. I had an escape route and cover picked out (2 large boulders to the right of the tent)but fortunately nothing dramatic happened. By 2:00AM the winds were diminishing and I fell back to sleep; awoke at 4:00 - the winds were gone and I slept til 6:30. 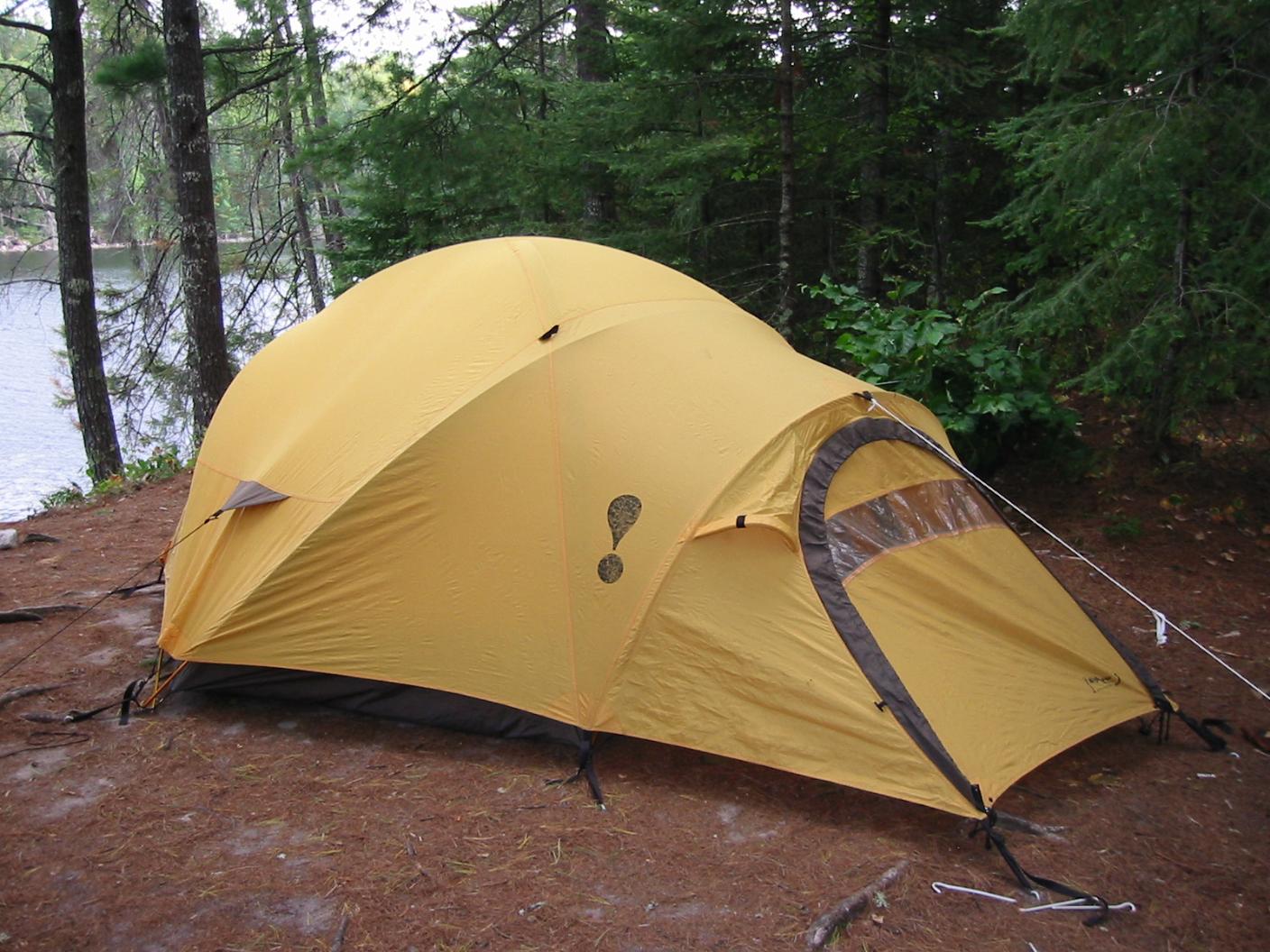 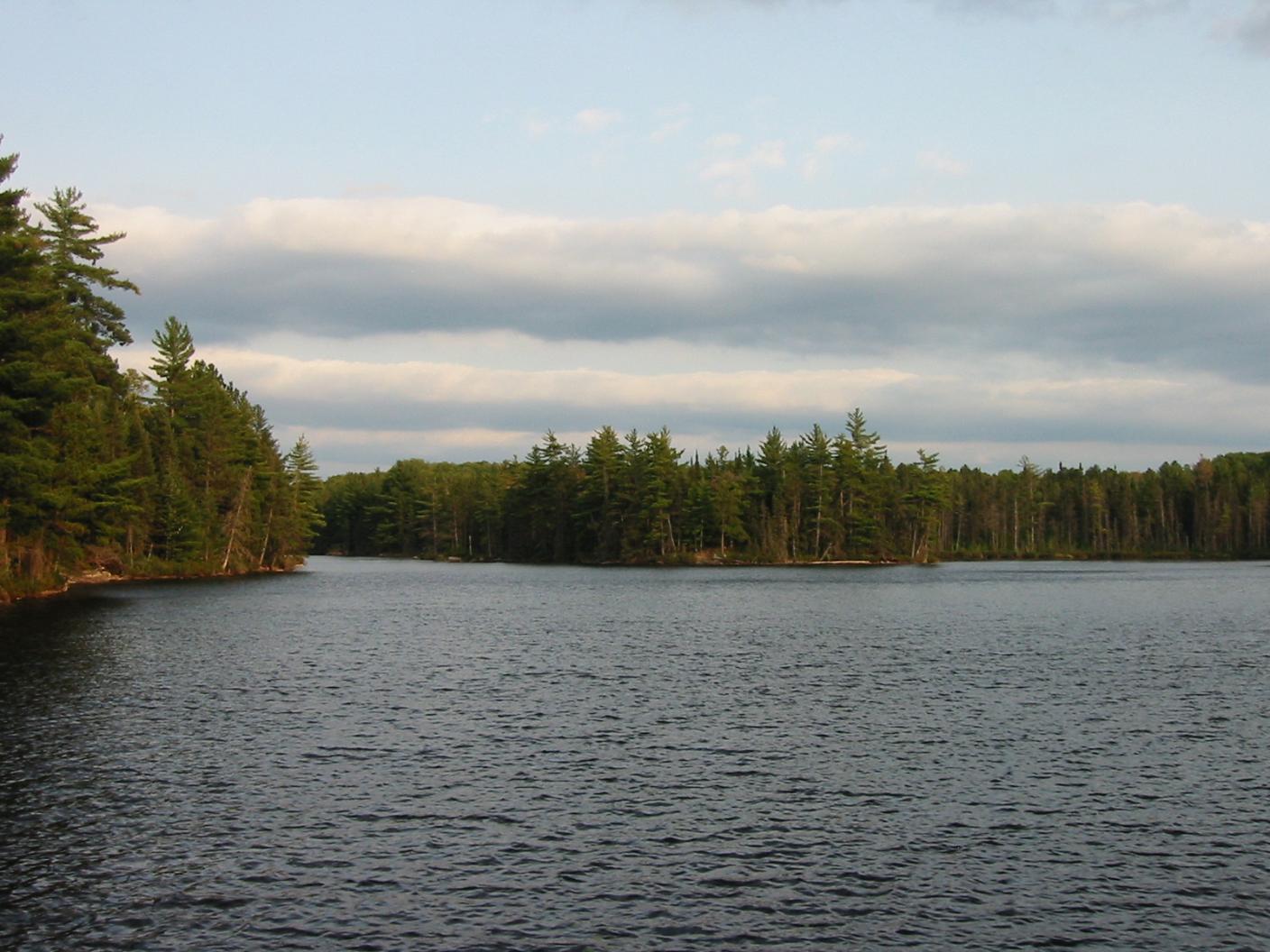 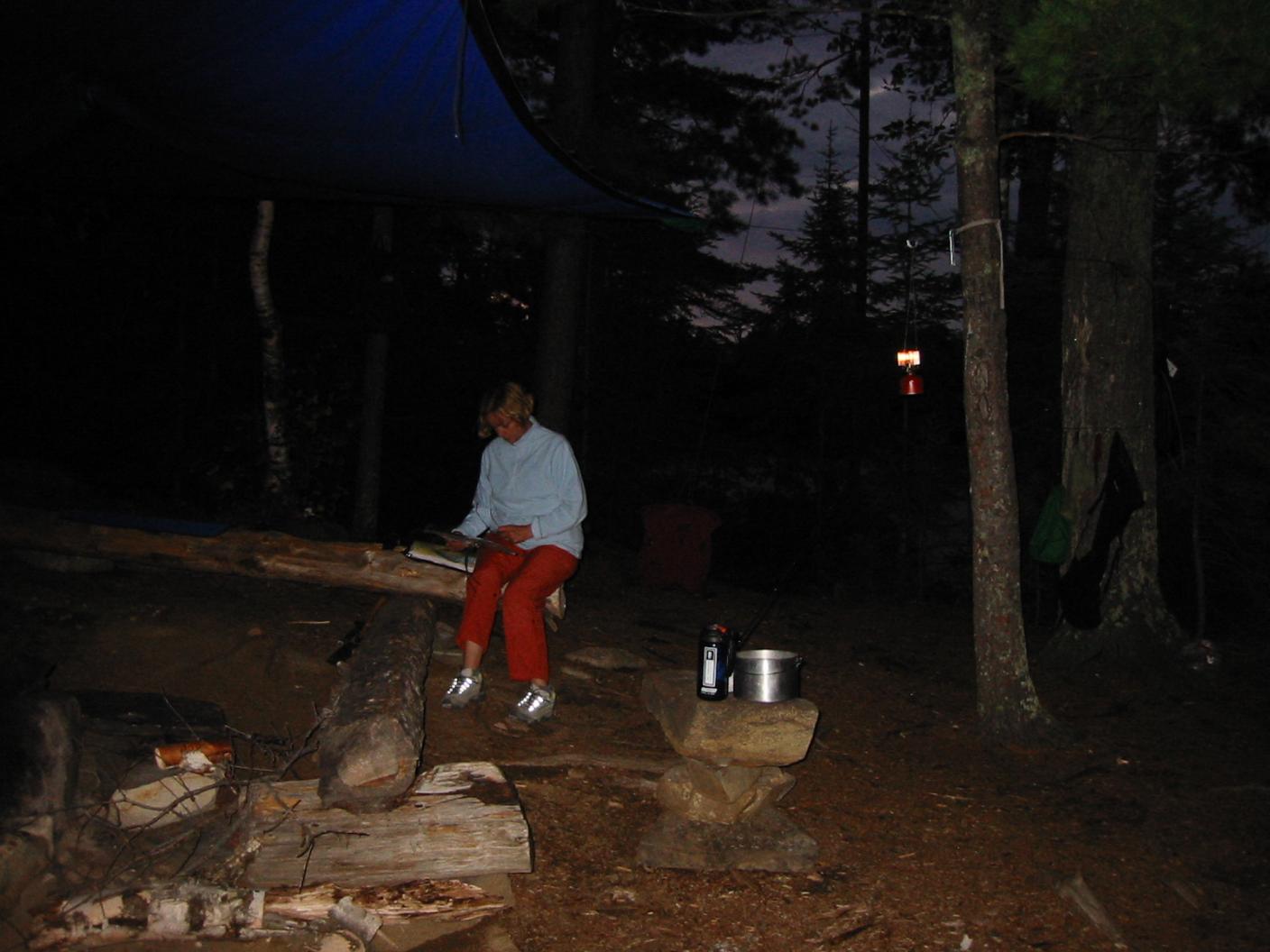