A Trip to the South Arm of Knife Lake
by snakecharmer

After a bacon and eggs breakfast, we hit the water. We were hopeful for better fishing than we had experienced the afternoon before. This time out we targeted the group of islands northwest of camp. I picked up a nice 17.5 inch smallmouth in front of the campsite next to the 30 rod portage that leads north to Knife Lake. The water was still very cold and the fish seemed lethargic with very little fight in them at all. While jigging a GULP minnow past the eastern most island, I tied into my very first BW lake trout - a nice 24-1/2 incher. And unlike the other fish we'd caught, this fish fought back! After a quick photo, the fish was released. Mike had never caught a lake trout and wanted to cross it off his list. We now had a mission. It was mid morning and we decided to portage into Sema Lake. The portage to Sema was located just south of our campsite. I had read Sema held lakers and we thought the lake's smaller size would give us a good chance of hooking up. I had read nothing about the nasty portage we would encounter. The first section was an uphill quagmire of boot-sucking mud and running water, then 50 rods of rocks and roots, ending with another section of running water and slippery rocks. Sema is a bowl shaped lake. Without electronics, we would have to locate the fish the old fashioned way. We trolled flashy spoons along the northern shoreline without any luck. We took a break to stretch our legs and walked the portage to the ponds that lead to Spoon Lake - viewing scorched hillsides along the way. After returning to our canoe it was decided our strategy would be to just let the wind drift us across the middle of the lake, back to the portage. We would jig our spoons as we drifted along. Soon Mike had a fish on, but lost it. Next I felt a tug, set the hook and boated a nice 2 pound lake trout. As we neared the portage shore, Mike caught his first laker. He released the fish, and with our mission accomplished, it was time to head back to camp for lunch. BW pizza was on the menu. Delicious! Later in the afternoon, we trolled around our area of the lake enjoying the nice weather and escaping the pesky black flies that had unfortunately appeared back at camp. Toward sundown, we spotted a cow moose in a back bay right behind our campsite. She was lying down in the water. She stood up and as she sauntered up the bank, a calf appeared at her side. They turned and looked back at us as we slowly paddled away. 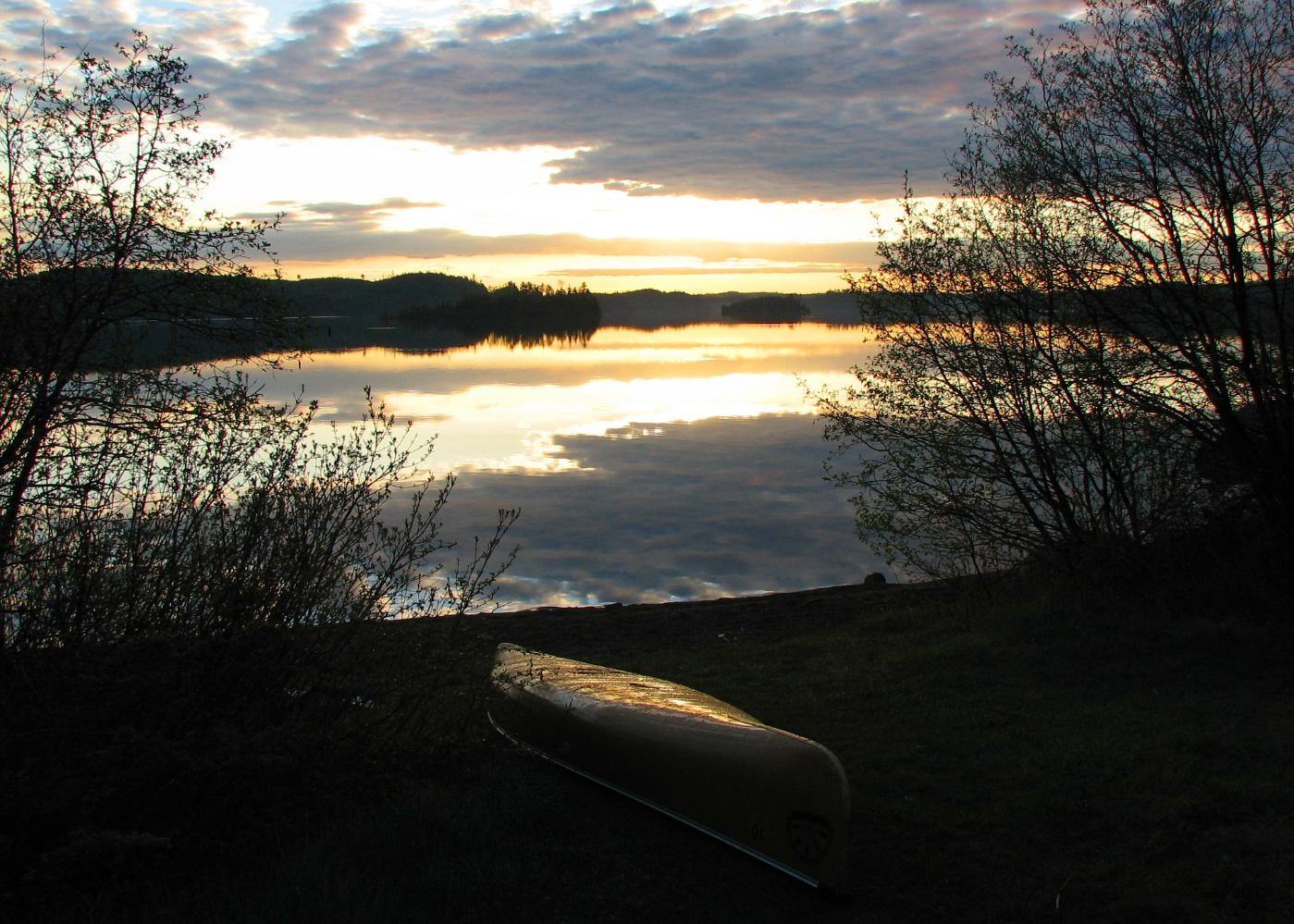 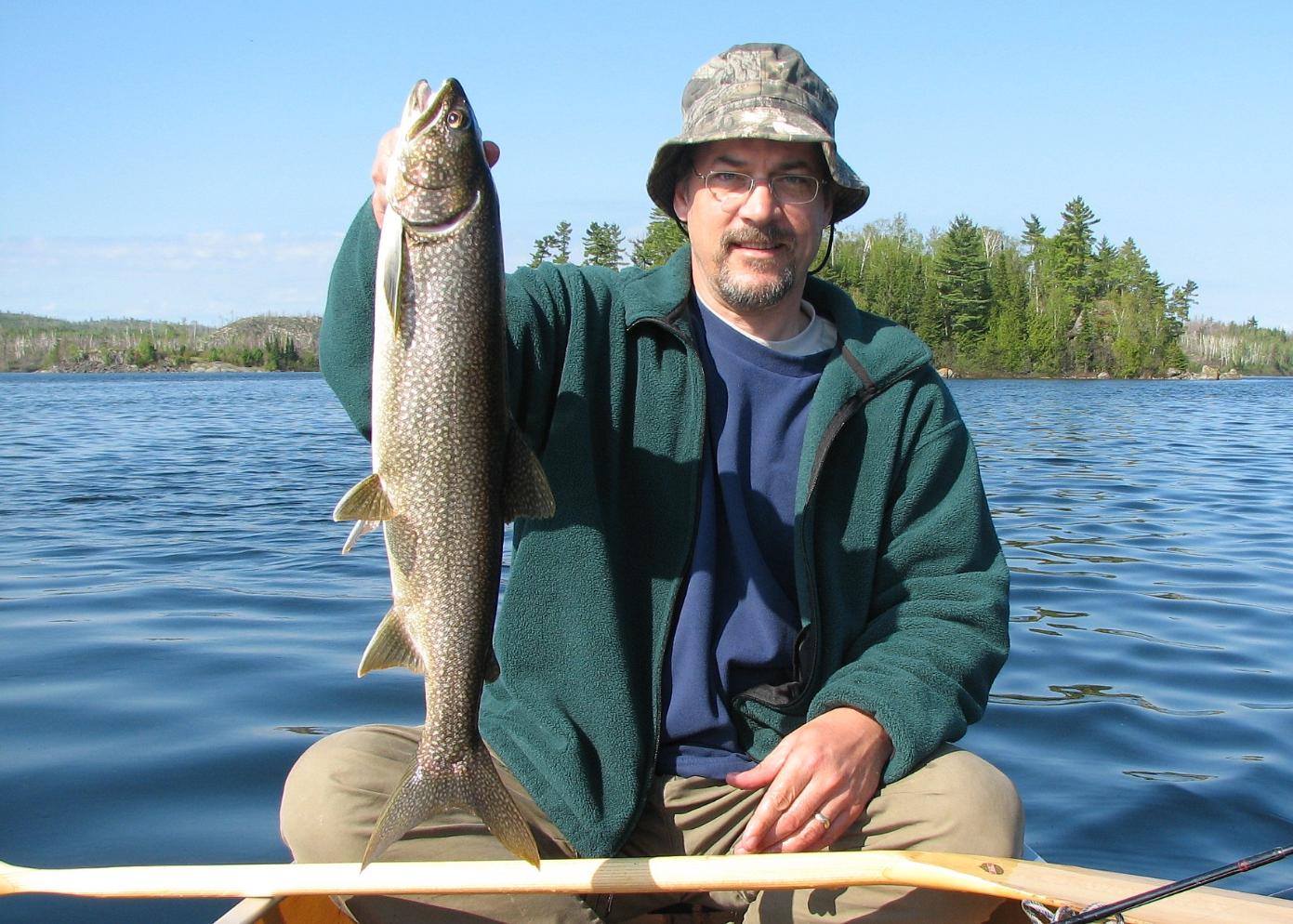 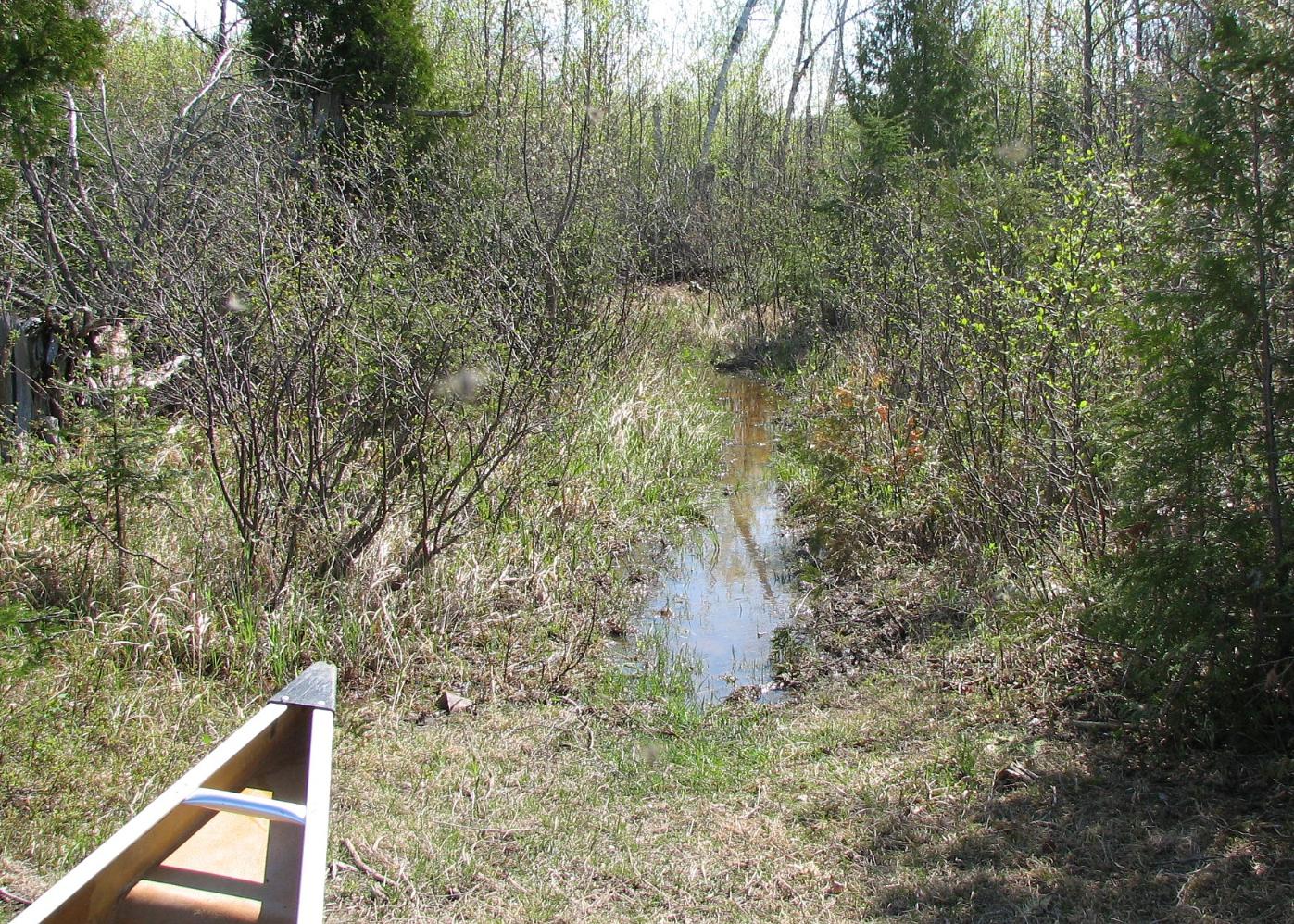 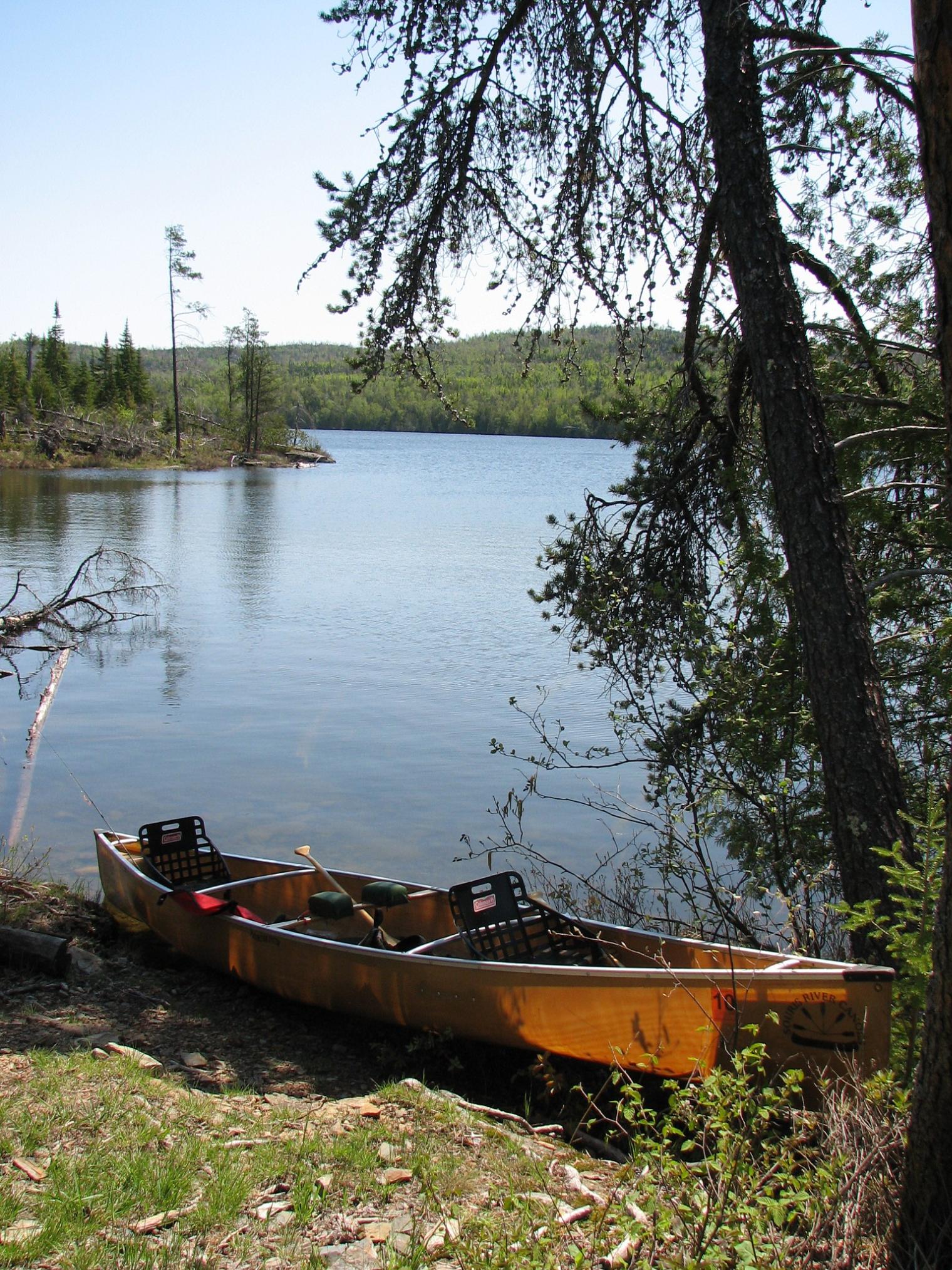 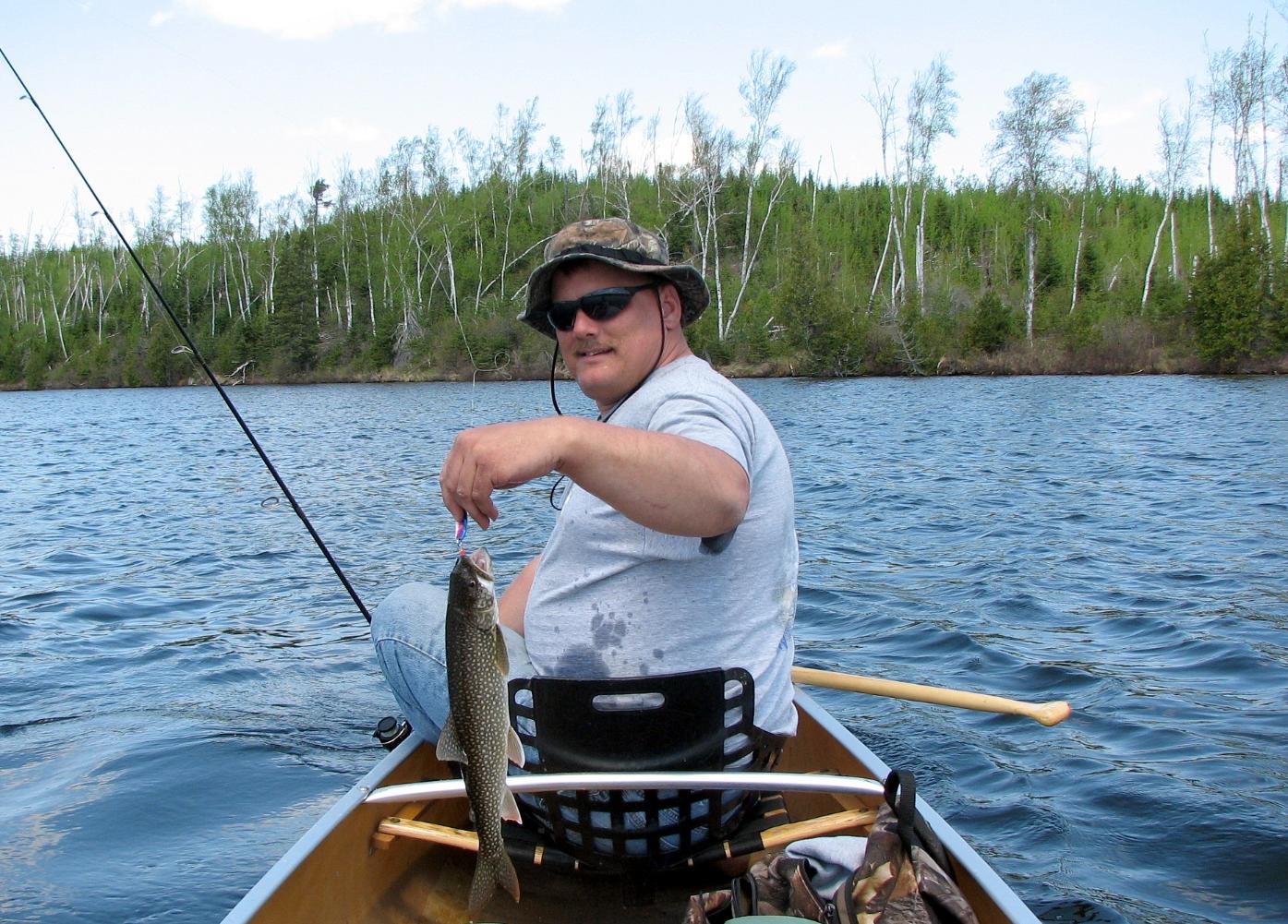