Trip Type: Paddling Canoe
Entry Date: 05/09/2008
Entry & Exit Point: Moose/Portage River (north) (EP 16)
Number of Days: 4
Group Size: 2
Trip Introduction:
I have this buddy-Clayton. He’s a fly fisherman-the real kind from out west. When he moved to Minnesota (we’re connected by our lady friends) he started learning me about fly fishing. My lady friend had just given me the greatest present ever-you guessed it-a fly rod for Christmas or my birthday or maybe it was just for being such a wonderful boyfriend. In any case over the last 3 years we have spent many a day fishing the spring creeks of SE Minnesota and western Wisconsin. And I’ve wrangled a respectable number of brookies and browns thanks to Clayton. Being from “out west” though lake/warm water/standard tackle fishing were things he had not done much of. Fortunately that was the bulk of my fishing experience and I was eager to repay the favor. While we’ve never done THAT much standard tackle fishing we’ve notched his belt with panfish, bass and pike. We always talked about taking a BWCA trip together which would combine two of our mutually favorite pastimes-fishing and wilderness camping. I have taken two prior opener trips and when I dreamt up an opener trip earlier this year my homeboy was game. He was really game when I told him we would get him a lake trout and hopefully be able to catch some pike on a fly rod. So therein lies our charge.
Day 1 of 4
Day 1 Friday May 9th, 2008 EP#16 Moose River North to Nina Moose Lake, Agnes Lake, Oyster River and Oyster Lake

We got a nice early start-I think we were on the road by 6 from south Minneapolis. I got my usual 1 hour of sleep after working the evening Thursday and finishing our packing at the last minute. I am known to fall asleep in the car with my buddy (strangely not with anyone else) when returning from fly fishing outings. He had agreed to drive and I to sleep. But I was too geeked up and ready for the maiden voyage of an ambitious 2008 softwater season campaign (5 BWCA trips planned ranging from 4-6 days in length). Did I mention how nice it is to live only about 4 hours from the BWCA?

We made it to Ely well before noon and had a couple orders of business…bait, permit and lunch. TGO, VNO, SUBWAY. We were hoping to make it to Oyster for night 1 and do some laker fishing in the am. Also hoping to get some up to date ice conditions in Ely. Unfortunately the only ice report we could get for Oyster was a couple days old (still frozen) but its accuracy was being called into question.

We headed up the Echo Trail and hit the portage at EP#16 Moose River North by 1pm? It was a beautiful “blue bird sky” kinda day-with the crispness of fall air. The river had a nice current and dragging bottom on sand bars as on a trip a couple years ago was not an issue. It was a quick paddle up to Nina Moose and I thought the portages were in pretty good shape (read not too muddy) in spite of last fall’s heavy rains and this winters accumulations. There were no unexpected or unmarked portages or even beaver dam liftovers. One hairy corner/downed tree(s) but nothing crazy.

Our (my) energy and enthusiasm for single portaging waned about this time and we backed off our pace a bit. We conquered the two portages along the river between Nina Moose and Agnes and soon we were paddling on a surprisingly quiet Agnes Lake (I expected crowds here when I saw the EP parking lot with 12-15 vehicles). I really expected crowds after not seeing a single group stopped at Nina Moose. With the sun still high in the sky we turned our attention to the western exit to Oyster. I should stop here and say thanks to Beemer and the gang who convinced me I needed to try the Chota Quetico Trekkers with Brookies. I loved them and felt freed from tip toeing and balance beaming my way across wet portages. Without this footwear the Agnes to Oyster River portage would have been much worse. As it were, it was soupy/riverine in places with some elevation change. The log-walk landing on the Oyster River side was largely submerged and muddy but still no challenge for my footwear. I like the way Bannock writes a new gear review at the end of his trip reports so I will spare you more bragging about my new gear…until then? Don’t know if I’ve ever felt a colder river than the Oyster-and we would soon find out why. The remaining 60 rod portage to Oyster Lake was over a beautiful trail with duff footing. Aside from the occasional moose track or wolf scat there were no other mammalian “footprints” on this trail (nor did there appear to be on the Agnes to Oyster River portage). Nearing the lake we were treated to the beginnings of what would be a great sunset.

When we reached Oyster we figured out: #1) why the Oyster River was so cold, b) why there were no other footprints and VII) that the 2 day old ice report/prediction was right…Oyster Lake was still frozen over. We tossed a couple rocks on the ice and proved that it was rotting and ready to crumble given some help. So we loaded up my Alumacraft battering ram and set off to break up some ice. We thought we could see a little open water on the opposite-western peninsula shore (near the supposed 5 star, peninsula-spanning, “saddle” campsite) but soon proved to ourselves that even though the ice was rotting and “honeycombed” it is not as easy to paddle through as say…soft water. Winded and weary there was no way to make it there. So we identified the closest campsite probably just a few hundred yards north of the portage. It proved to be a really nice site with a good stash of split firewood (leftover from the winter?) but at the same time needed some cleaning up. Probably only 1, maybe 2 decent tent pads. Great bear rope branch right in the middle of camp (I know most would recommend hanging a ways outside of camp). After setting up camp we whipped up a special first night dinner of ribeyes cooked over the fire (yes on “the” grate) and mac and sneeze. We were so full we swore off dessert. We were treated to a beautiful sunset and had the whole lake to ourselves! One of my favorite and probably most durably memorable days ever in the BWCA! 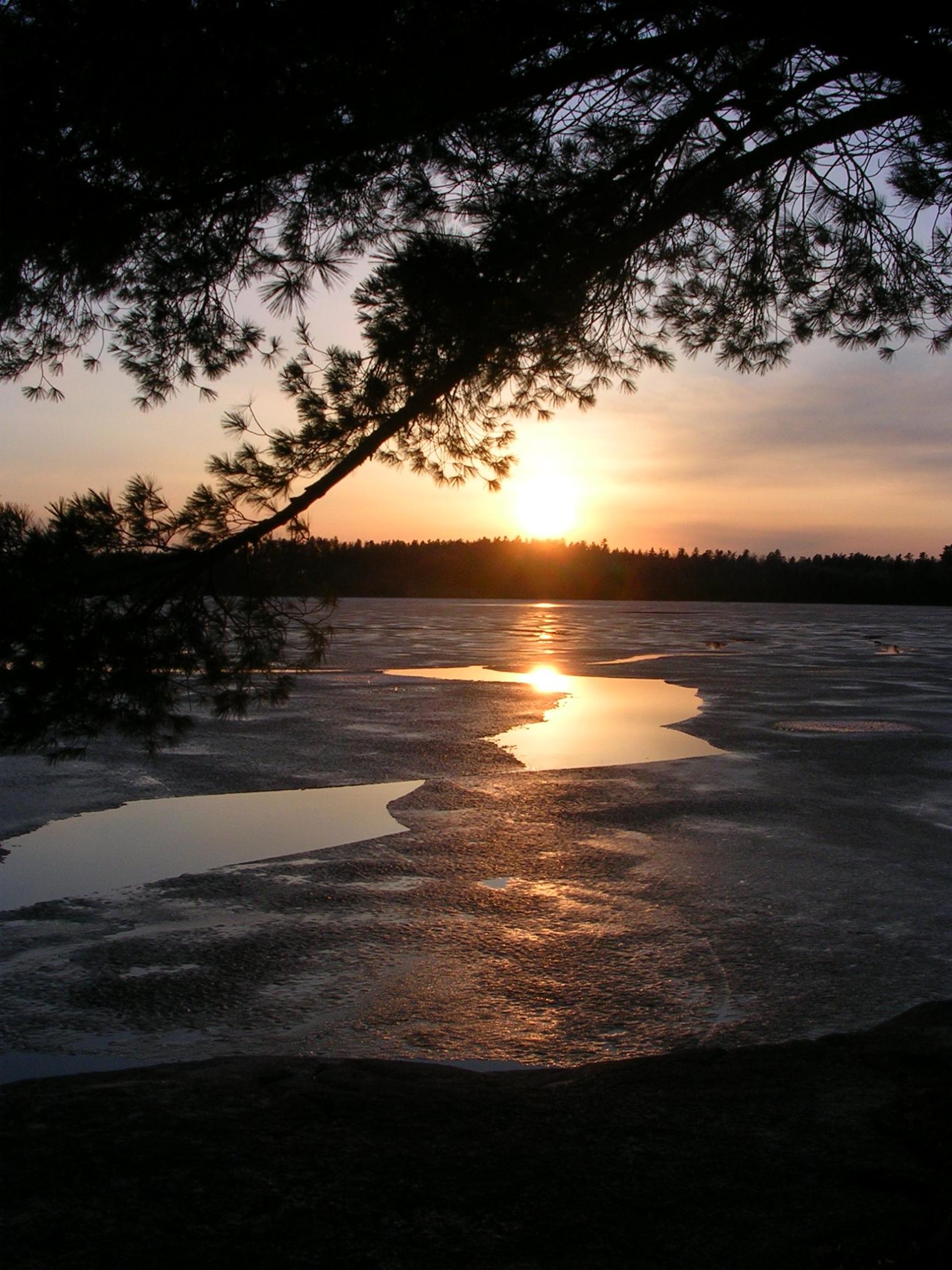