I woke up about 5:30 am after a really good night’s sleep. Often the night before a trip I never sleep much-for some reason this year I had no problem. Kevin was already up and ready to get going. We left VNO and headed for Britton’s for breakfast.

Britton’s is always a great early breakfast stop in Ely. The food is amazing in quality and quantity and the homemade wheat toast is addicting. Coffee has some bite and the staff really takes care of you. Many others were in the café when we were there talking about a wedding and other local topics. Kevin and I finished our breakfast and said our farewells. He was headed toward Lake One while I was headed up the Echo trail to meet up with Joe at Mudro EP.

I arrived at the Mudro EP at 7:30 right on time and there was Joe waiting for me as planned. He had arrived moments before me. I parked the van in the empty Chain Saw Sisters parking lot and had a brief moment of sadness looking at the stairs to nowhere with the building gone. I will miss CSS and the cold beer on exits. Joe and I threw my packs and gear in his Jeep and off we went to the Stuart River EP.

The Forest service had not yet reposted the summer EP signs so we had to keep our eyes peeled for the small winter signs they post to avoid vandalism to the larger, nicer summer signs. Larry and I missed the turn off last spring, but this year I knew better and we found it with no problem.


We drove the short distance from Echo trail to the parking lot and were amazed by all the cars. There were 4 vehicles plus a forest service truck which had us baffled. If Stuart is iced over where are all these people going to be found? The forest service truck had arrived moments before us and the ranger had some VCC students who were going to do some portage clearing work. Joe and I smiled on our good fortune as they would take out all the big stuff so all we had to do was nip back the brush. I took some of my gear down to the beginning of the portage trail and looked down the trail. Maybe 100 yards from the start of the portage was a significant amount of snow. This was our first sign that spring had not yet arrived. Upon closer inspection it was snow that was drifted in about knee deep still. This would not be the only snow or other winter-like conditions we would encounter on this trip. Hey at least there are no bugs. Weather was overcast and about 35 when we arrived at the portage.

We walked the portage with the ranger that Joe knew discussing conditions and the strange spring weather as the kids cleared a couple of deadfalls up ahead. Joe and I had to double portage so we carried for a while and then dropped to go back for the other half of our loads. The kids finished their work and we were on our own-well except for trying to figure out who we would see ahead based on all the vehicles at the parking lot. All along the way we saw fairly fresh foot prints so we knew whoever was ahead of us either went in yesterday or more likely early that morning.

The portage was in pretty good shape and we encountered only marginal clearing opportunities. We nipped back brush on the return trips for our gear. When we reached the spot where Swamp Creek crosses the portage for the first time things got a little interesting. The foot rocks were completely underwater and very slick. We carefully crossed watching each other ready to assist if needed. We made it across without incident. I knelt down and felt the water which was bone chilling cold.

A little further we reached the half bridge to nowhere over Swamp Creek and discussed our options. The beaver dam that used to hold back Swamp Creek had blown out fall of 2007 and now the water level was at an awkward stage. It was too high to cross at the hummocks and too low to paddle easily. We found some limbs and sticks back in the woods and made a make shift dock to load from. We got far enough out for the canoe to float and loaded up and pushed and pushed in the muck to free ourselves. We finally were able to put our paddles in the water and start the paddling portion of our journey. A short paddle and we were on Stuart River.

Joe had brought his recently purchased Bell Northstar for us to paddle. It is a nice canoe and rather short at 16' which would really come in handy in a couple of days. However, right now, the shorter length was a challenge as we tried to figure out how to place our packs in the canoe for proper trim. We quickly learned that we did not have it trimmed right yet as we fought the canoe to track straight, paddle and be stable. It was a nerve wracking first few minutes paddling as we knew the water was cold and we did not want to experience it firsthand.

The first portage arrived none too soon and when we landed we first looked at how we could load the canoe differently at the far end. This was only a 100 rod portage so we carried a load all the way across and nipped on the way back each of us taking a side. Once back at the far end we would pick up our other load and head back across.

This time we loaded the canoe better and the Northstar was not as much of a battle. That change in packing made both of us feel better. We still discussed some fine tuning for the next portage but we were pretty set now for the rest of the trip on where each pack would travel.

As we walked the next portage some of our answers regarding the other people started clearing up. Here was a group of three with very little gear and only one canoe. They were a bit disappointed to see us and I guess the feeling was mutual. They said they were on a scouting trip to see Stuart Lake for the fishing opener the next weekend. They also told us that Stuart was solid ice shore to shore and we would not get to any campsites. This was not unexpected news but was still disappointing to hear as Joe and I had hoped we could at least get to the southern island site. After we left the other crew we surmised they really were not scouting but probably stashed a canoe and some gear to lighten their loads for a fast entrance for the opener. We did not care and never looked for their stash even though we are sure that is what they did. They had 3 of the cars at the EP but that still did not explain the 4th vehicle.

Water levels were extremely high all along this route and we encountered no Beaver Dams that we could not just paddle over. Even the water entrance to White Feather Lake was high enough to paddle and if nothing else we could stay there as White Feather looked ice free except for some ice piled on shore in places. It looked like it had gone out in the last 24 hours. I have to admit being in the BW knowing you are one of the first paddlers of the year was exciting.

We landed at the portage near the small lake called Contest. Joe has always been an adventurer and this was a lake neither of us had been to yet and we figured we had time to explore. We dropped most of our gear at the portage and decided to bushwack into little Contest Lake. It was a challenge as the small creek was too narrow to paddle and the floating bog surrounding the creek was very spongy and open in spots. Saw a stubborn snapping turtle blocking our way who was pretty lethargic and not moving really fast. We took turns walking forward and throwing the canoe line to each other to pull it through. We made it and paddled Contest Lake for our enjoyment. It is always fun getting to paddle lakes few ever see. It was definitely worth the effort.

We continued on toward the final portage and Joe and I circled around through the gorge to the back side portage entrance to Stuart Lake. This takes some elevation and a good 30 rods off the portage. Plus if Stuart really was iced over we would camp here as It is not an official portage and we had gotten clearance from the ranger we saw at the beginning of the portage. Well at least he said he did not care and doubted anyone would be by to check anyway. That was enough of a clearance for us. We dropped our gear at the portage entrance, grabbed our nippers and cameras and headed for the lake to see what was up. Knowing no one else was ahead of us and probably not behind us our pace slowed as we approached the far end of the portage.

All of a sudden we came upon the other cars owners. A husband and wife who had gone into Sterling Lake for a couple of nights R&R. They also said that Stuart was iced over but all the lakes headed toward Sterling were open. He felt ice would go out on Stuart in the next 24 hours as it was looking pretty black in places. I guess that was better news as we knew we could access the lake, just not sure we could access a campsite.

The bay in front of the falls was indeed clear of ice, but the rest of the lake was still covered. It looked like there was no way to access the island so we decided to stay put, set up camp on the portage and hope Sunday would be a better day.

We cleared most of the portage and went back and cleared the backdoor portage a little bit so we could set up our makeshift camp. There would be no fire tonight and our trowels would get some work digging a cat hole. We had dinner saving our steaks for tomorrow night when we should be at a campsite where fire grate existed.

It was a cool evening but a nice evening. Joe and I talked about options and decided we would just wait it out and see what happened. I had a Maker’s Mark nightcap, thought about what Kevin may have experienced so far on his trip and went to sleep to the sound of wolves howling nearby. 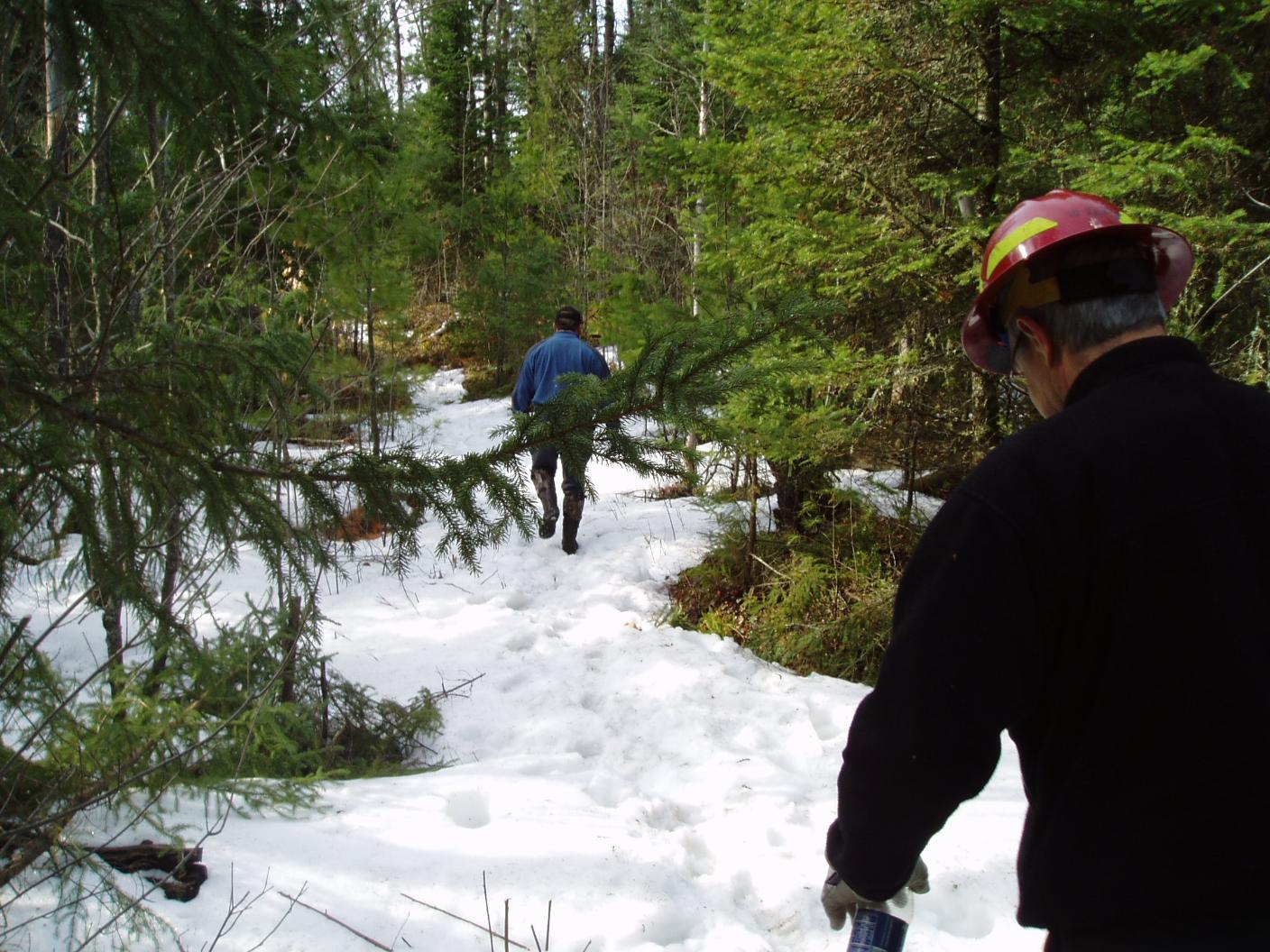 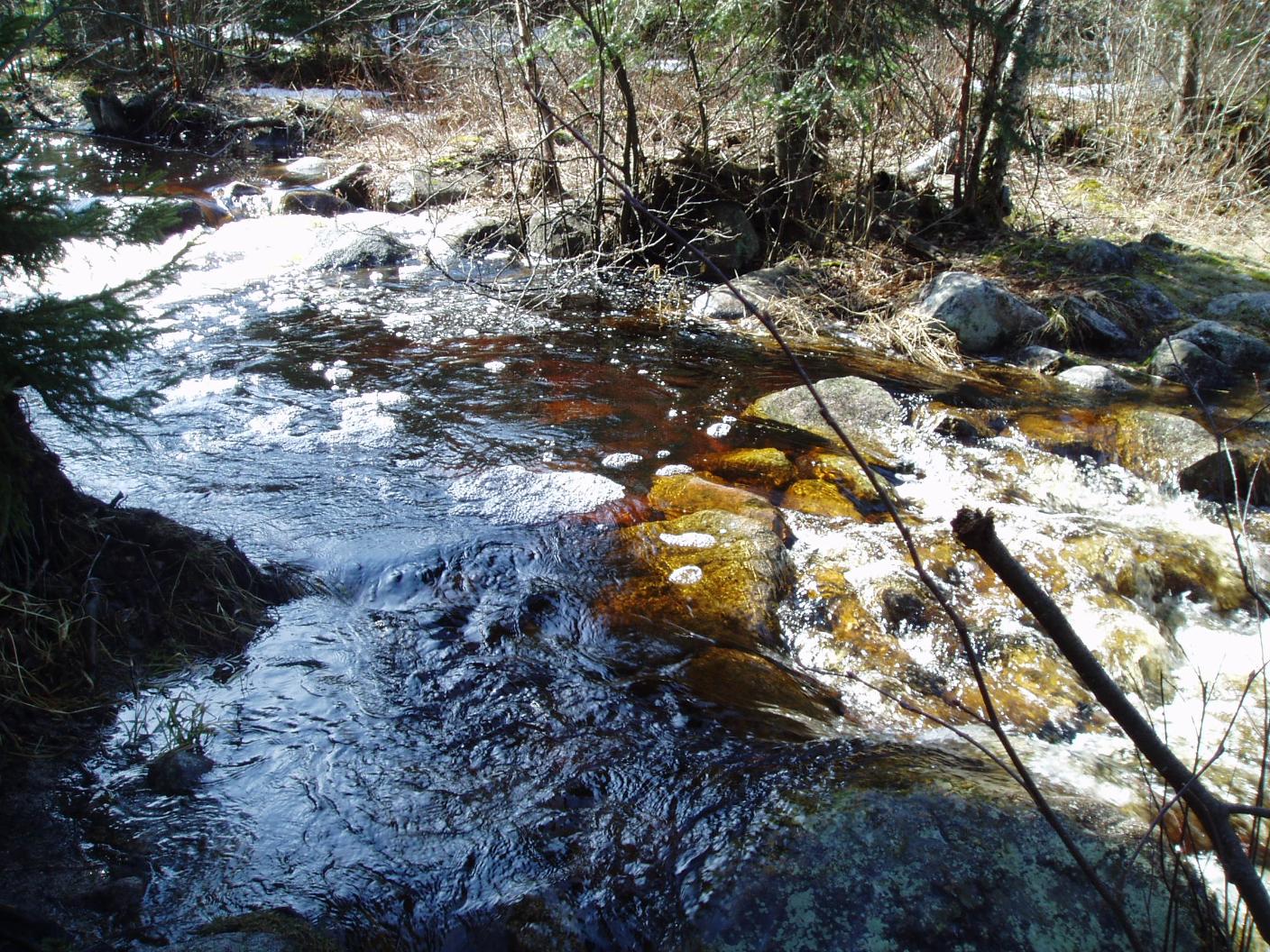 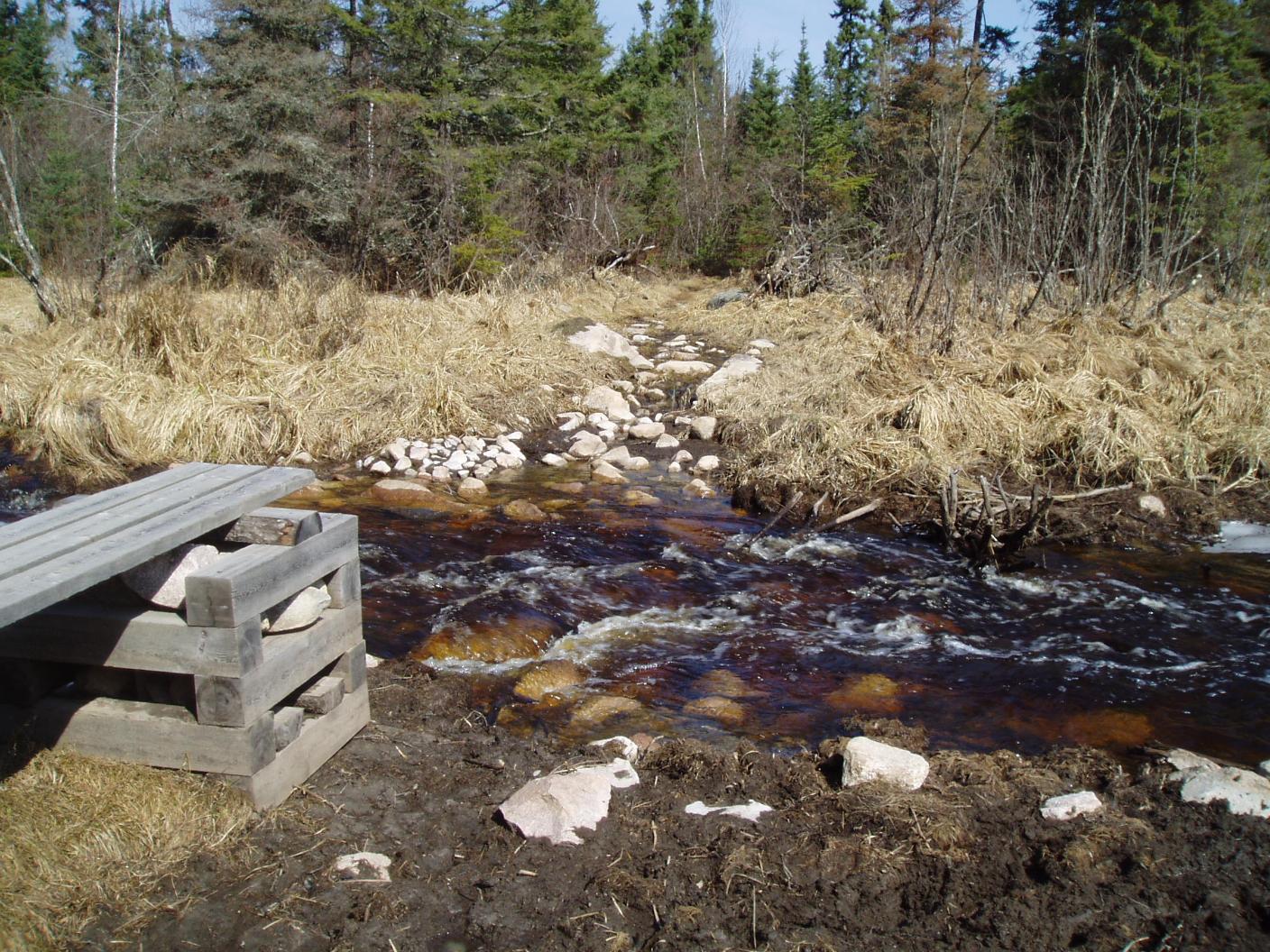 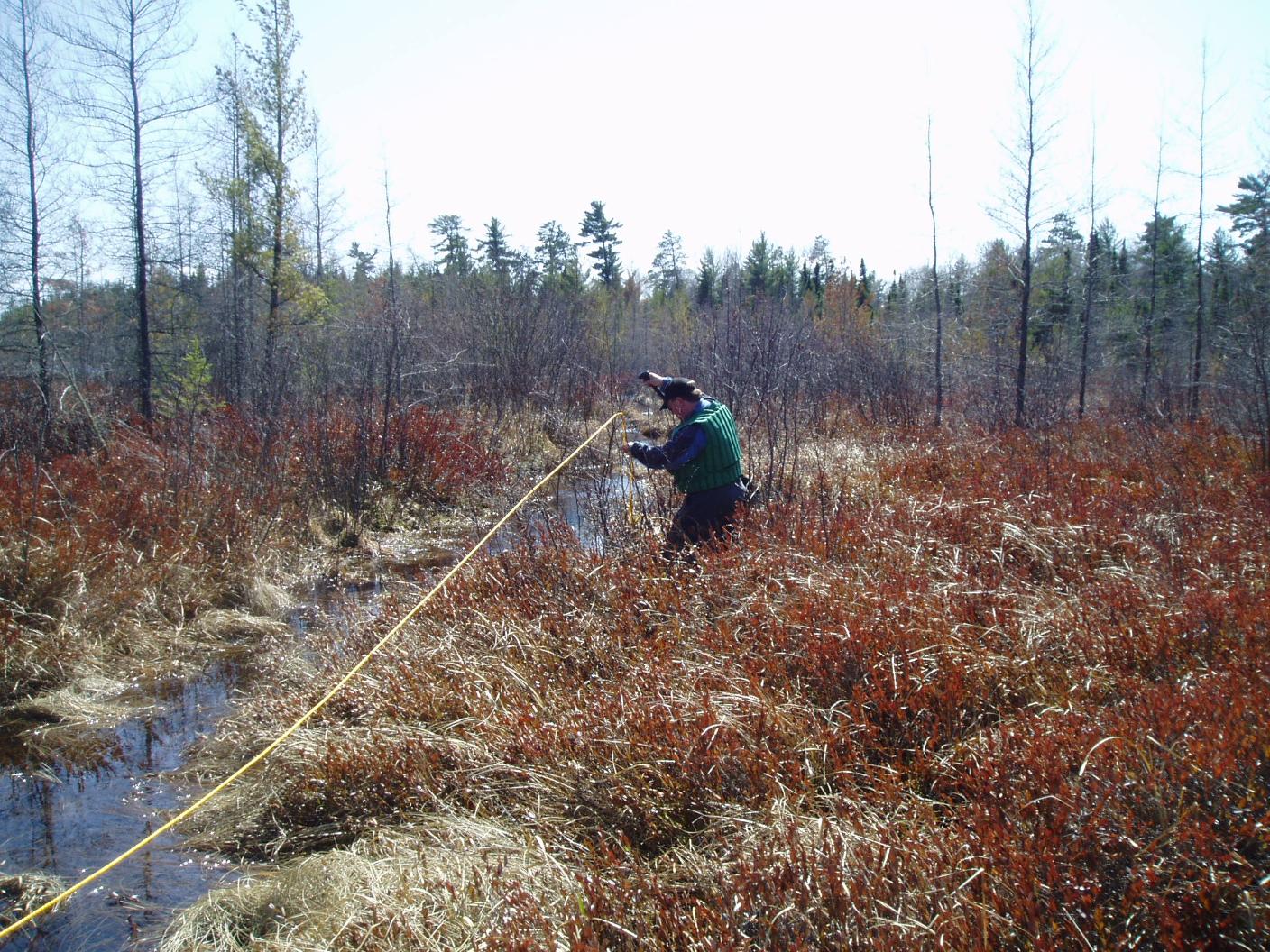 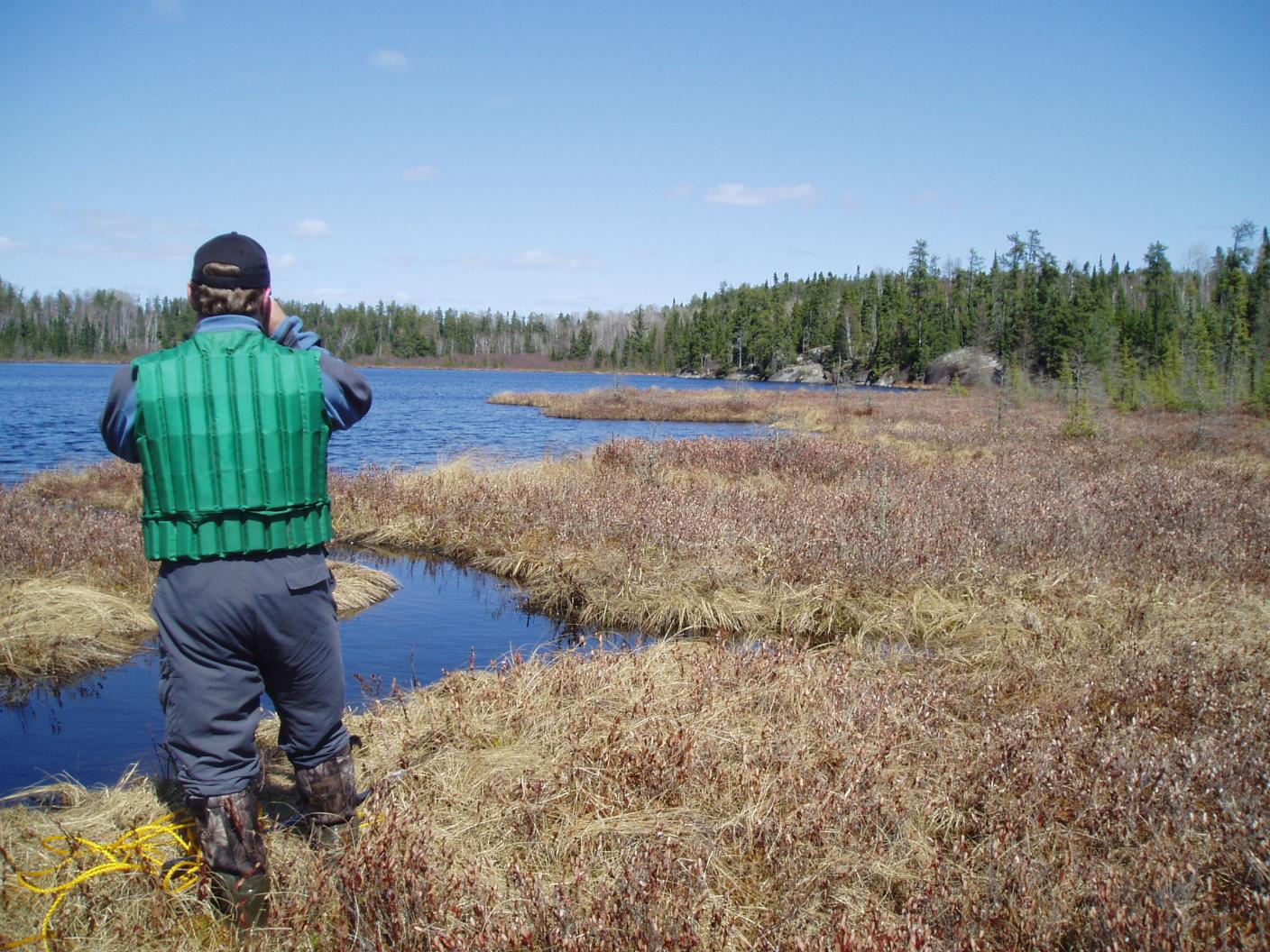 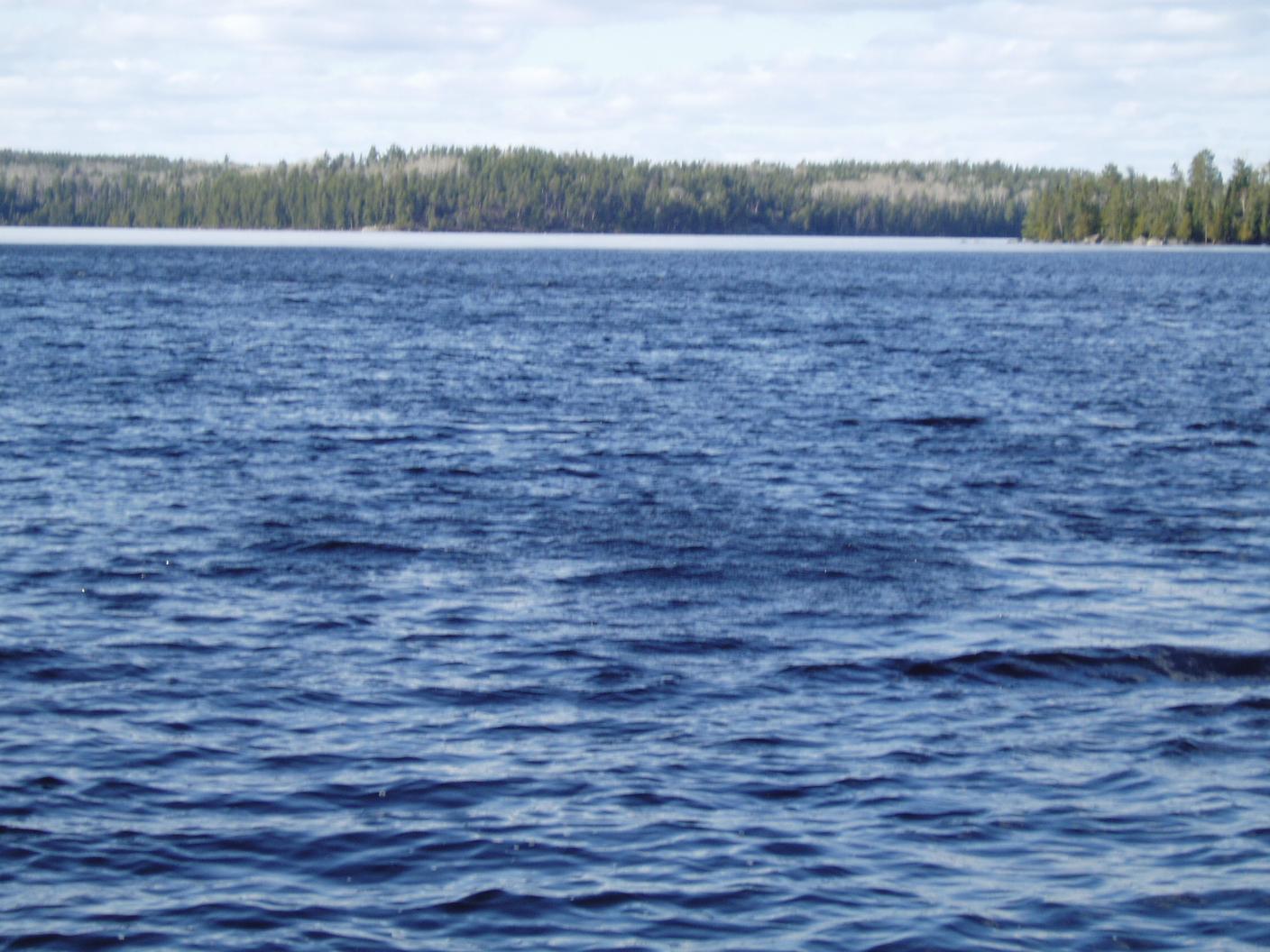 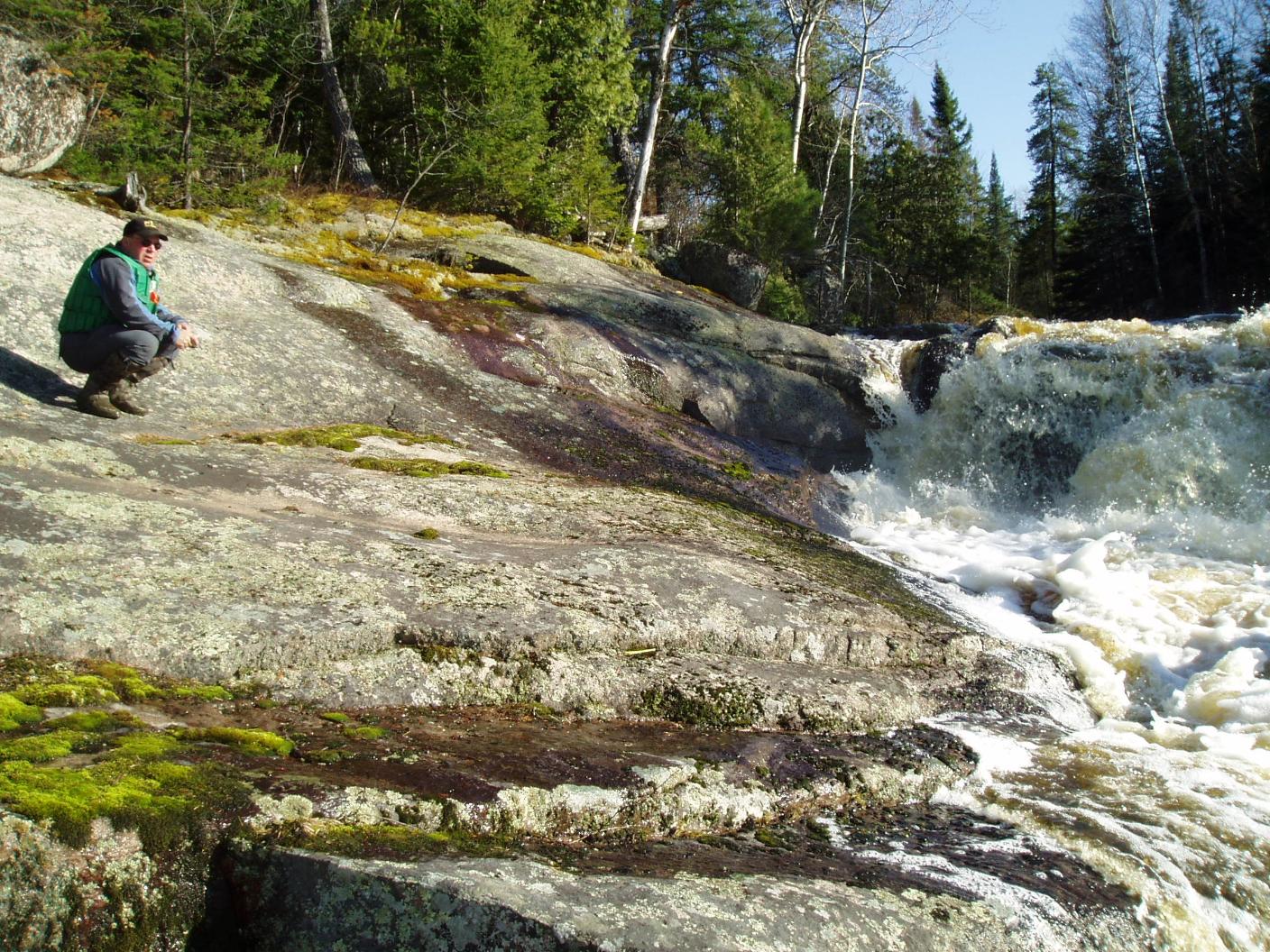