Solo trip from Lake One through Snowbank
by PapaDave

Lake One, through to Lake Insula, in about 5 hours. Everything, going just swell. Located my campsite on Insula, set up camp had a good nights sleep. Caught a couple of Smallies, and let them go.

Had a little fire, rehydrated some chili, and went to bed.

Another uneventful day, caught a northern that I managed to take a picture of from the canoe. Paddled from Lake Insula, to Kiana , the on into Lake Thomas, where I set up camp again.

Built a nice fire early enough to set up and bake cornbread to go along with my spicy bean and potato dish.

Went to bed at about 8:30, after making sure the coals were totally out.

This was going to be a long day. I wanted to spend a couple of days on Disappointment, before heading home.

The day started off with a Thunderstorm, no sooner had I gotten on the Lake. Pulled ashore and waited it out.

Taking off, trolling my rapala as I paddled along, Caught a couple more smallies, no real size, let them back to grow some more.

Paddled through Thomas, through the pond, past Hatchet lake, and on into Ima. Across Ima, and through Cattyman, Adventure, Jitterbug, Ahsub, and finally on into Disappointment.

It was starting to get later than I was hoping for. Going solo, I packed too much stuff as usual. Having to triple portage, on quite a few, well Ok most of them.

Lo and behold, as I was paddling along, each and every campsite I came across was occupied.

A Thunderstorm was approaching from the North, and coming on fast. I headed for the last campsite on the Lake. Paddling as hard as I could. Only to find it occupied also.

Here I ran into 2 of the greatest guys. Captain Dan and his son Matt. Welcomed me ashore and shared their campsite with me for the night, as they were going to be leaving the next morning.

Lots of fun setting up my tent and tarp in a heavy rain, but I managed, and cooked my dinner under the tarp, and  pretty much passed out from exhaustion.

Just a reminder to me to get my campsite earlier in the day, and not push so hard.

Stayed one more day, on Disappointment, dried out a lot of my gear, fished a little, Dan left me a couple of potatoes, garlic and oil. So dinner was fried potatoes, I got my dutch oven out and baked cheese biscuits. A great dinner the the last night.

Going home,  Paddled to the Disappointment portage to Snowbank Lake. Sky was cloudy, but no rain, a little breezy. Once I got to Snowbank access, I would have a 5 mile walk back to my car.

Met some other nice folks at the portage, To my surprise upon heading back for my second trip, a nice lady, Laurie had picked up a couple of my items, and carried them across. The next trip I managed my small pack and canoe. My first double portage since Day 2.

The icing on the cake, when I reached Snowbank access, The three of them (Carl, Laurie and son John) gave me a ride to Lake One to retrieve my Jeep, and head back to Snowbank to pick up the canoe.

It was a wonderful time in the BWCA.

I do know that if the situation is/was reversed, I’d do the same. David Navratil 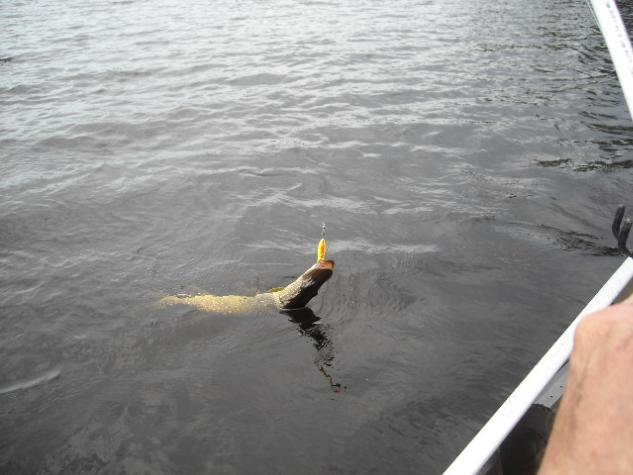