Trip Type: Snowshoeing
Entry Date: 12/20/2007
Entry & Exit Point: Other
Number of Days: 7
Group Size: 2
Trip Introduction:
It was finally winter break and time to have some fun in the BWCA.
Report
The day has finally come when we get to start our adventure. I’m on winter break from school and not a worry on my mind. The day started at 5:00 on the morning, we knew we had to get an early start because it would probably take all day to get to Ramshead Lake. If you are wondering why we chose this lake it is because of the potential of catching a monster northern pike and they are also a blast in general to catch on tip-ups. So we left Kevin’s house which is just north of Virginia, Minnesota at 6 and headed towards Orr. We made one final stop at the bait store to get another two dozen minnows, which turned out to be a good idea. About an hour after that we were in the middle of the Echo trail getting ready for our four and a half mile walk. We entered the BWCA on the Blandin Trail which is located near Meander Lake. It is a trail that is used by dogsledders, but when we arrived there was no evidence of anybody using the trail yet for the year! This by the way made it much more difficult since we now had to make our own trail through about two feet of snow. So we started walking around 8 in the morning and planned on reaching the lake by 1 in the afternoon. After two hours of walking we realized this was not going to be possible. There were a lot of large buck rubs on trees and I did a lot of daydreaming about how nice it would be to bow hunt the area in the fall of the year (it helped pass the time). So at about 2 we finally reached Lamb Lake, from here it is about a mile walk to our camping spot on Ramshead. We were relieved to finally get to this point and we took a half hour break. After getting rested up we hoofed it to the campsite and set up camp. I had a 5-gallon bucket that I drilled small holes in so I could sink it under the ice and keep all the minnows alive (it worked really good). So I did that while Kevin started a fire. We then took out the mac and cheese and had a great meal (for the middle of the woods in winter that is). In the morning we slept in and got up around 9. We started a fire and made some oatmeal for breakfast. The conditions were not in our favor because it was on and off snow all day. With all this snow it caused there to be about 8 inches of slush on top of the ice. Good thing we brought extra pairs of boots. We got all the tip ups set up around 11 and went back and sat by the fire. It didn’t take too long to get a tip up. Kevin pulled in an 8 pound pike and it was an awesome feeling because this is what we had come to do. The rest of the day we gathered firewood and caught pike. For dinner we had fresh pike and rice a roni (it was delicious). The next morning wasn’t any better than the first; it ended up snowing all day! Never put a line in the water but still had a good time exploring the wilderness. On day four the snow let up and the sun came out! There is nothing better than having a sunny day when you are winter camping. This allowed us to dry the sleeping bags and tent. The bags are black so all you need to do is hang them from a tree and let them hang in the sun all day. Good fishing today, caught about 10 pike ranging from 4-12 pounds. Also missed quite a few. At this point we had the dog trained to pick up the pike when we caught them and bring them back to the pile at shore. That afternoon there was a pack of 5 timber wolves on the opposite side of the lake. They were playing with each other for about a half hour! I made sure to chain the dog up just in case he saw them. He never did since we were upwind of them. The next few days went great and we had an awesome time up there! I think we got about 20 inches of snow the entire time we were up there which made for one hell of a workout on our walk out. First stop on the way back was the A&W in Orr for a big greasy burger. I recommend winter camping to anyone who is up for a challenging, fun experience 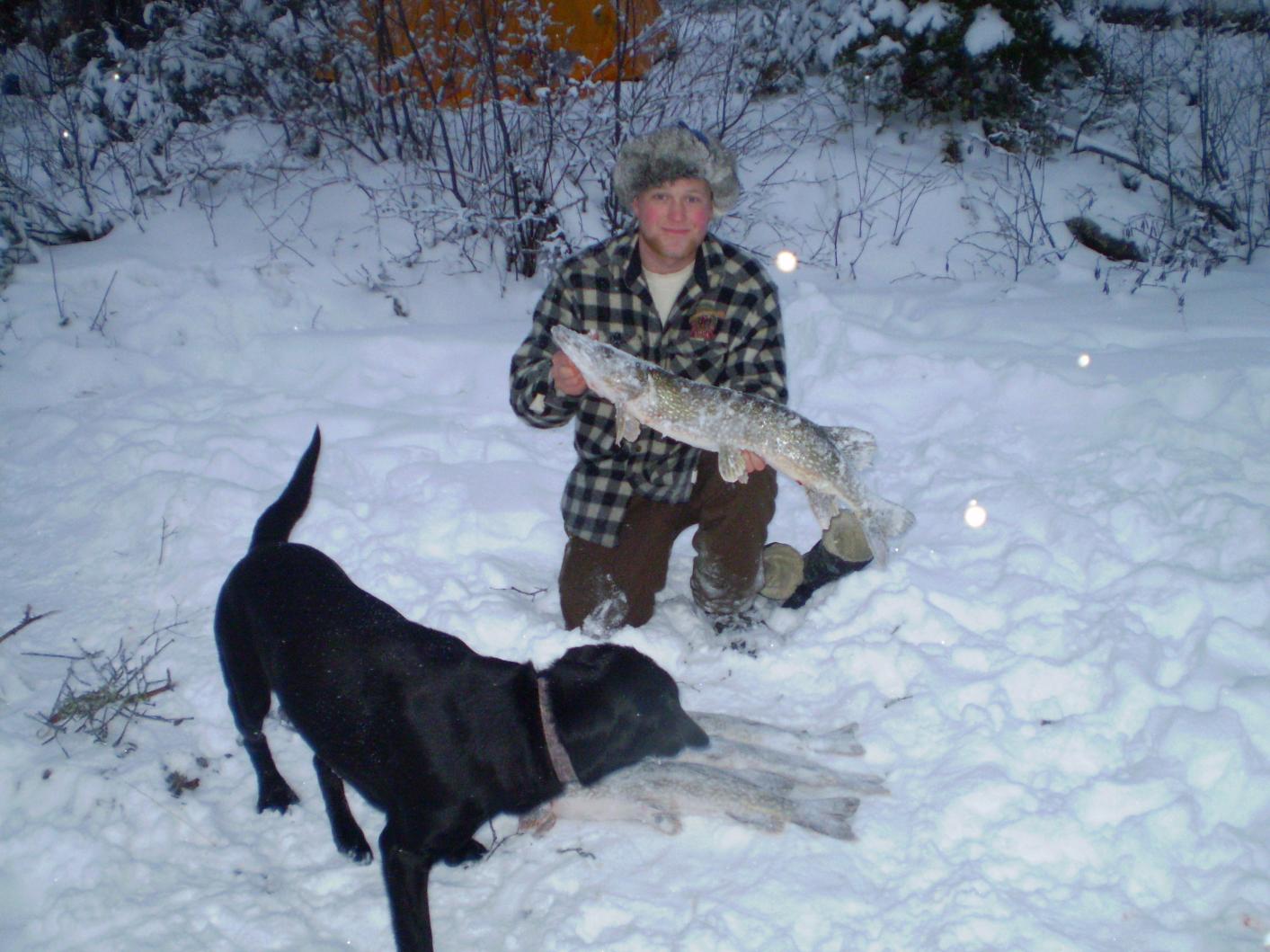 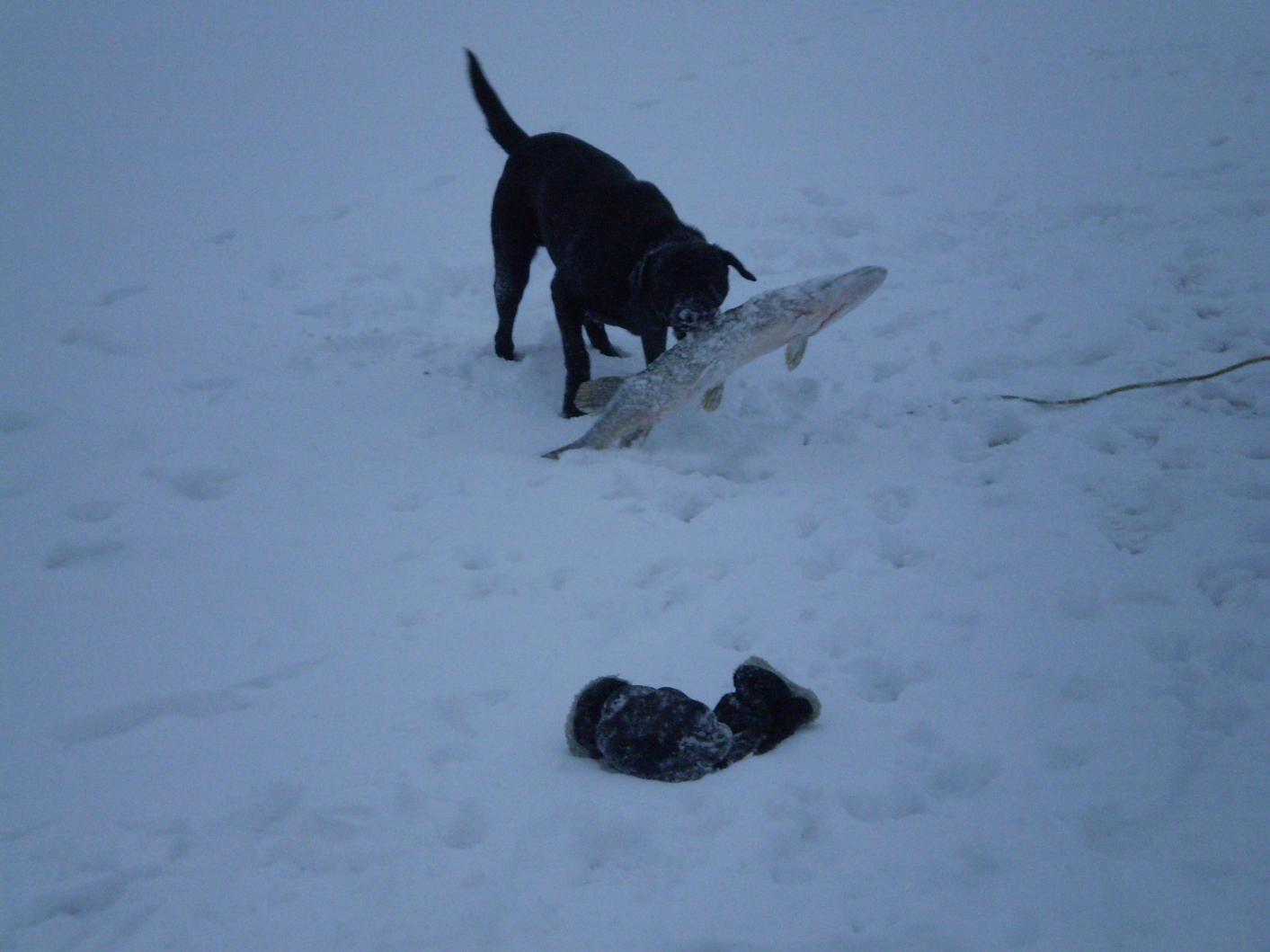 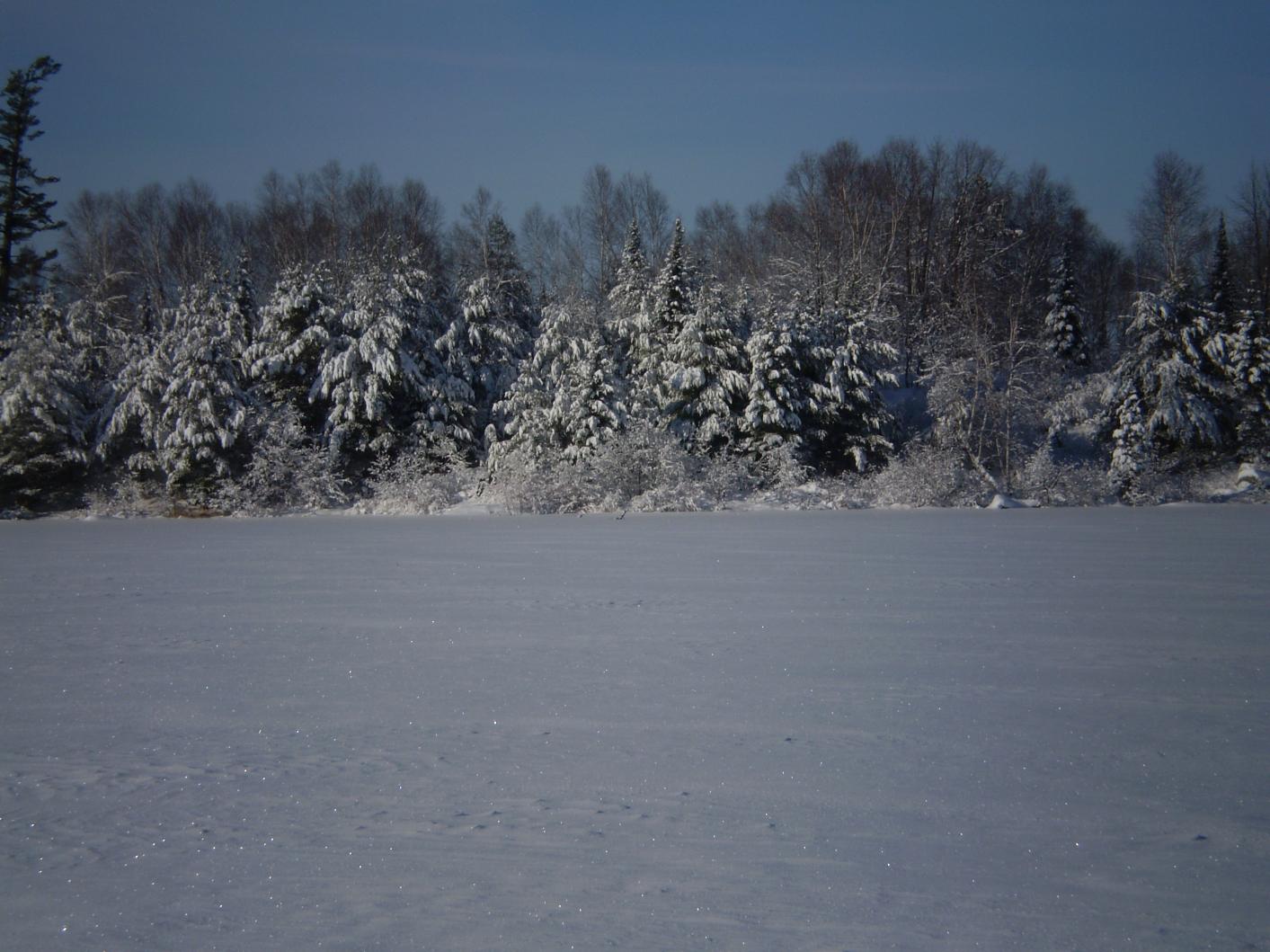 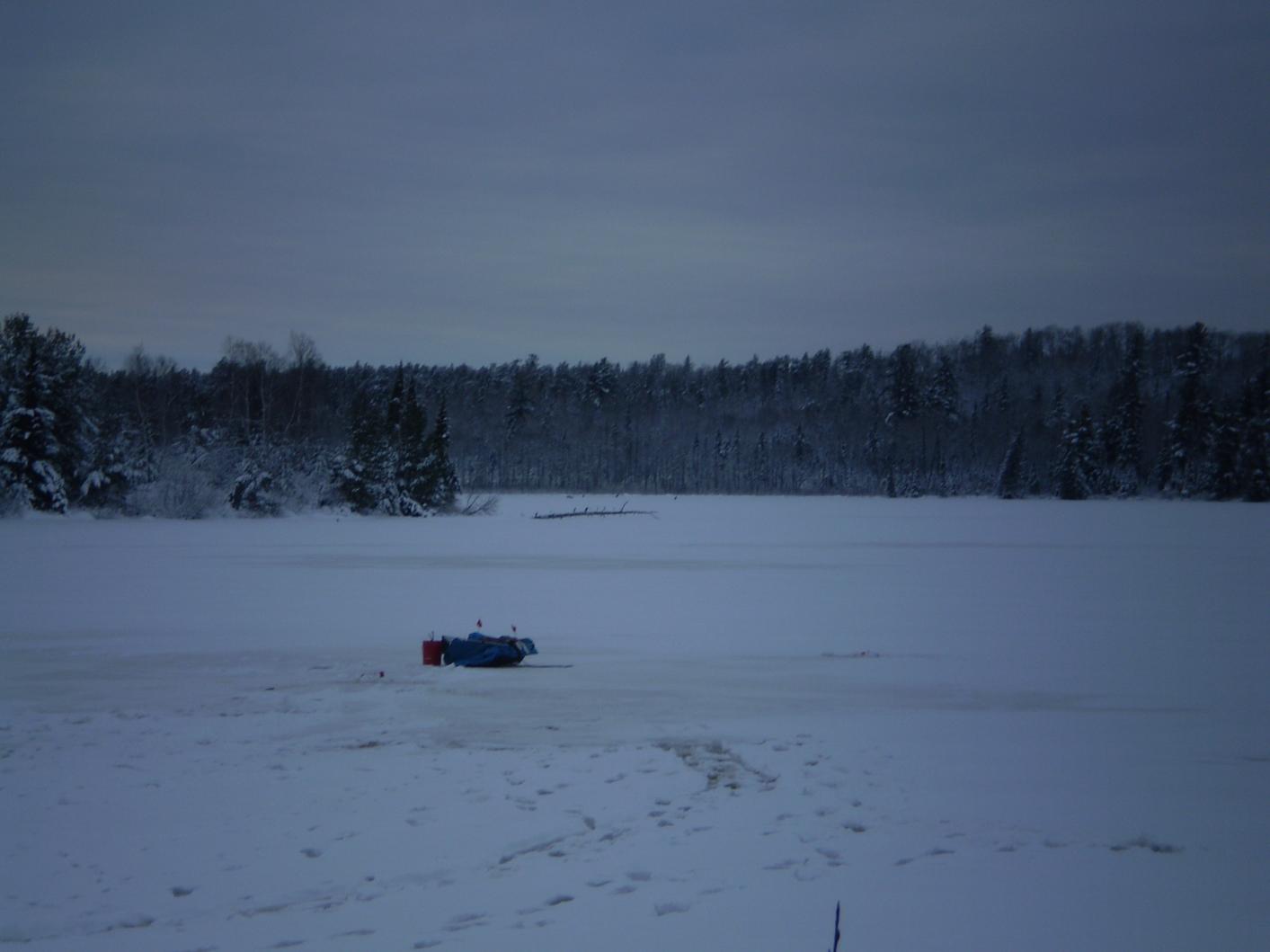 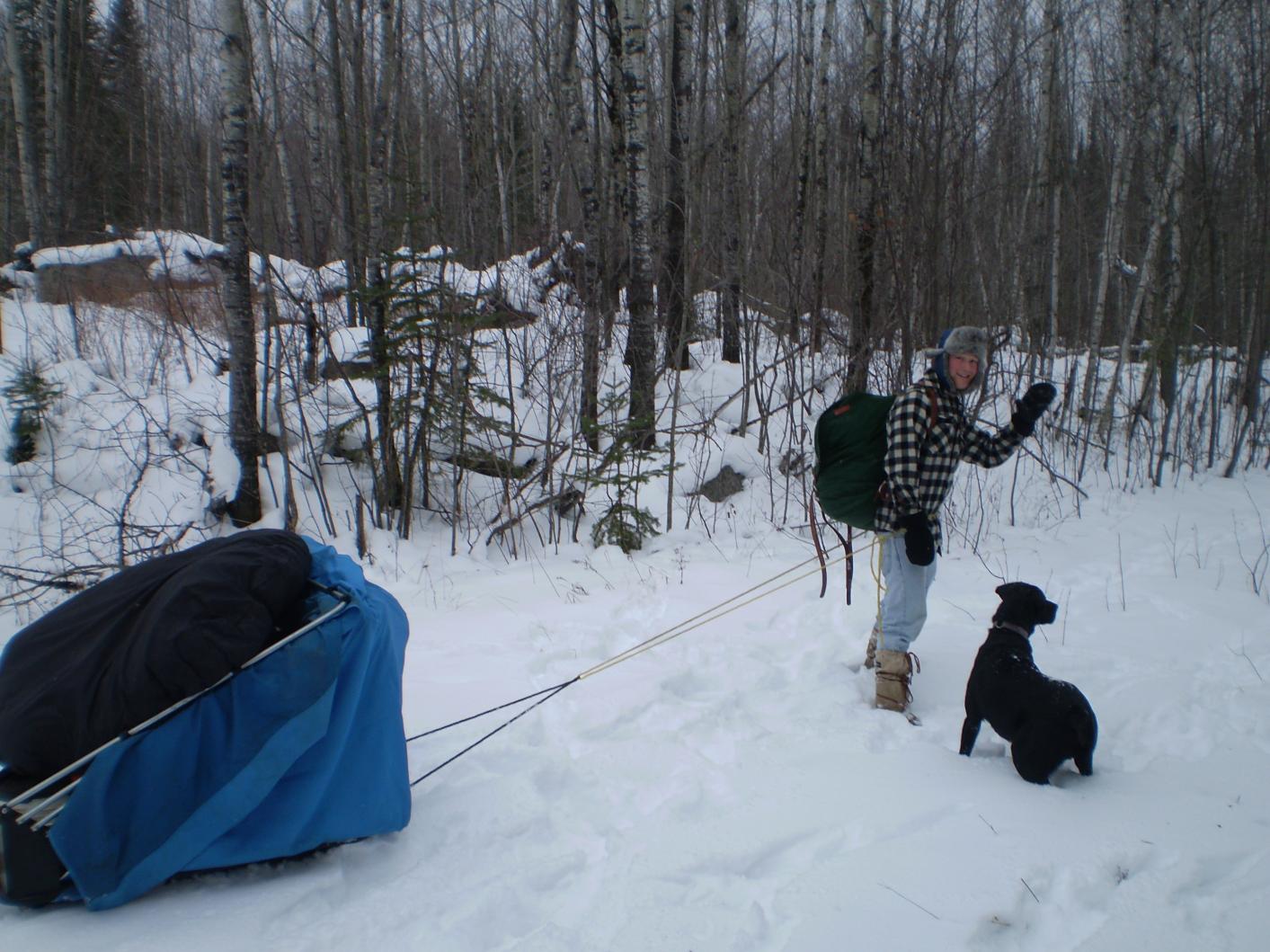 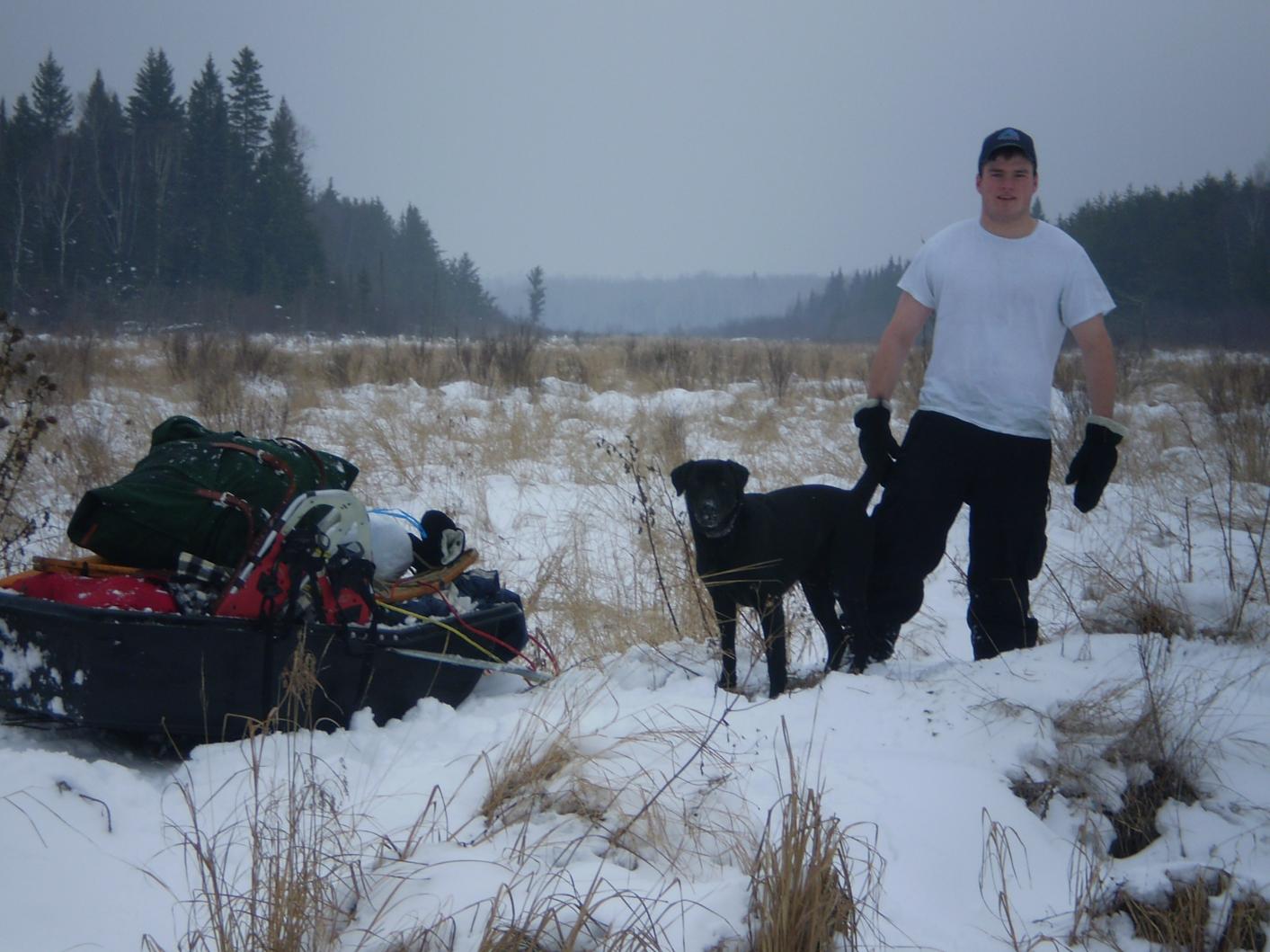 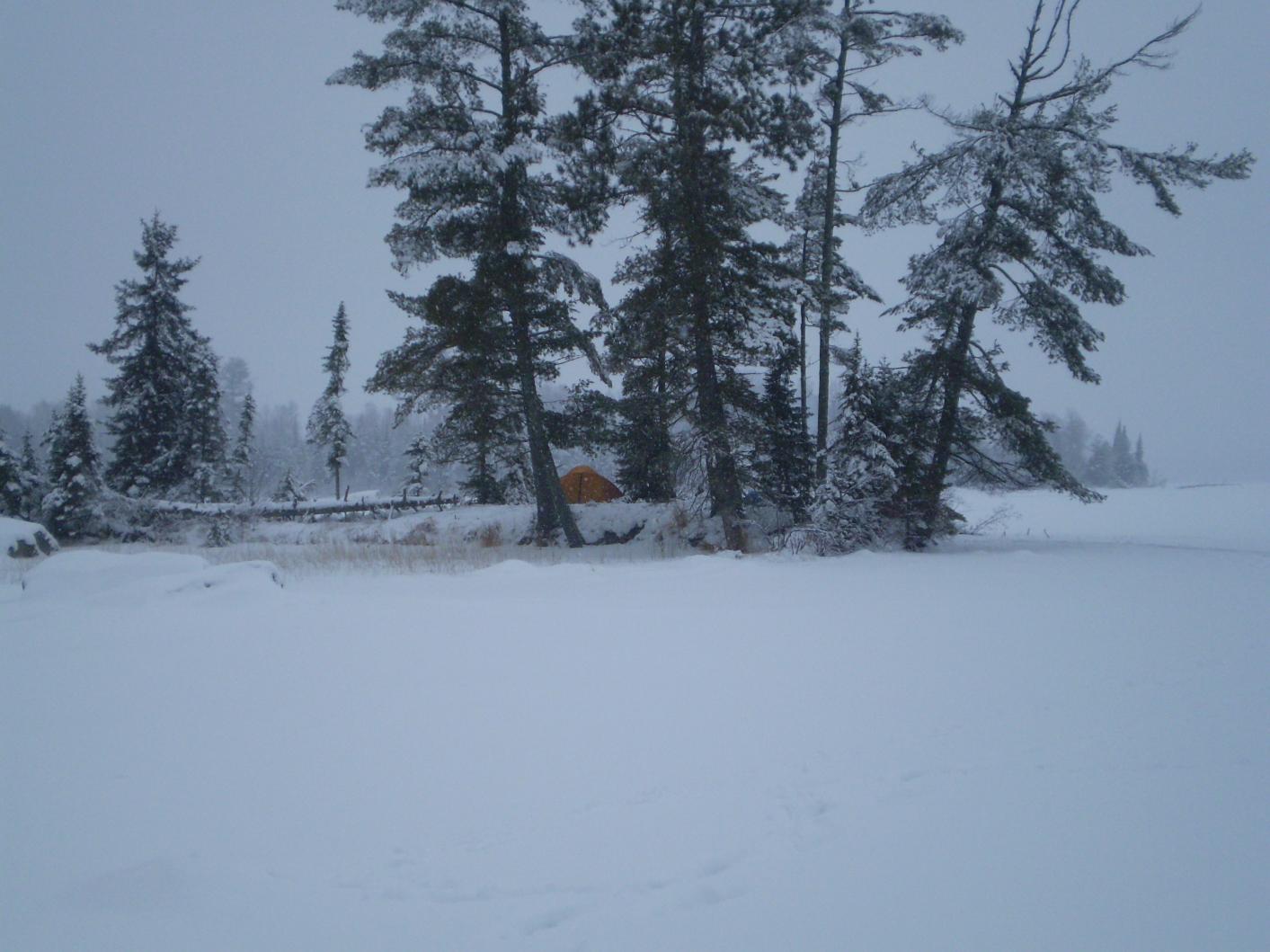 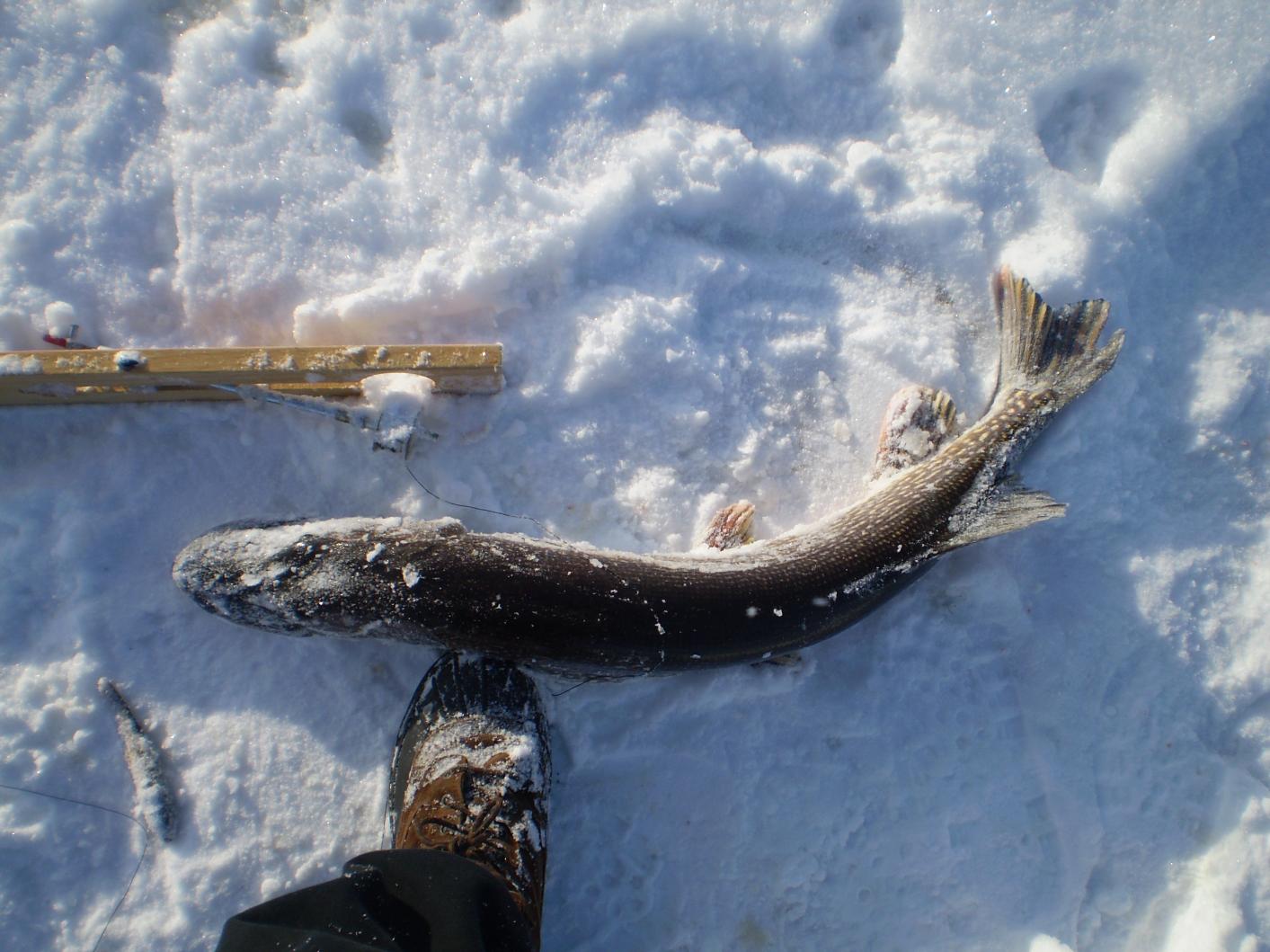 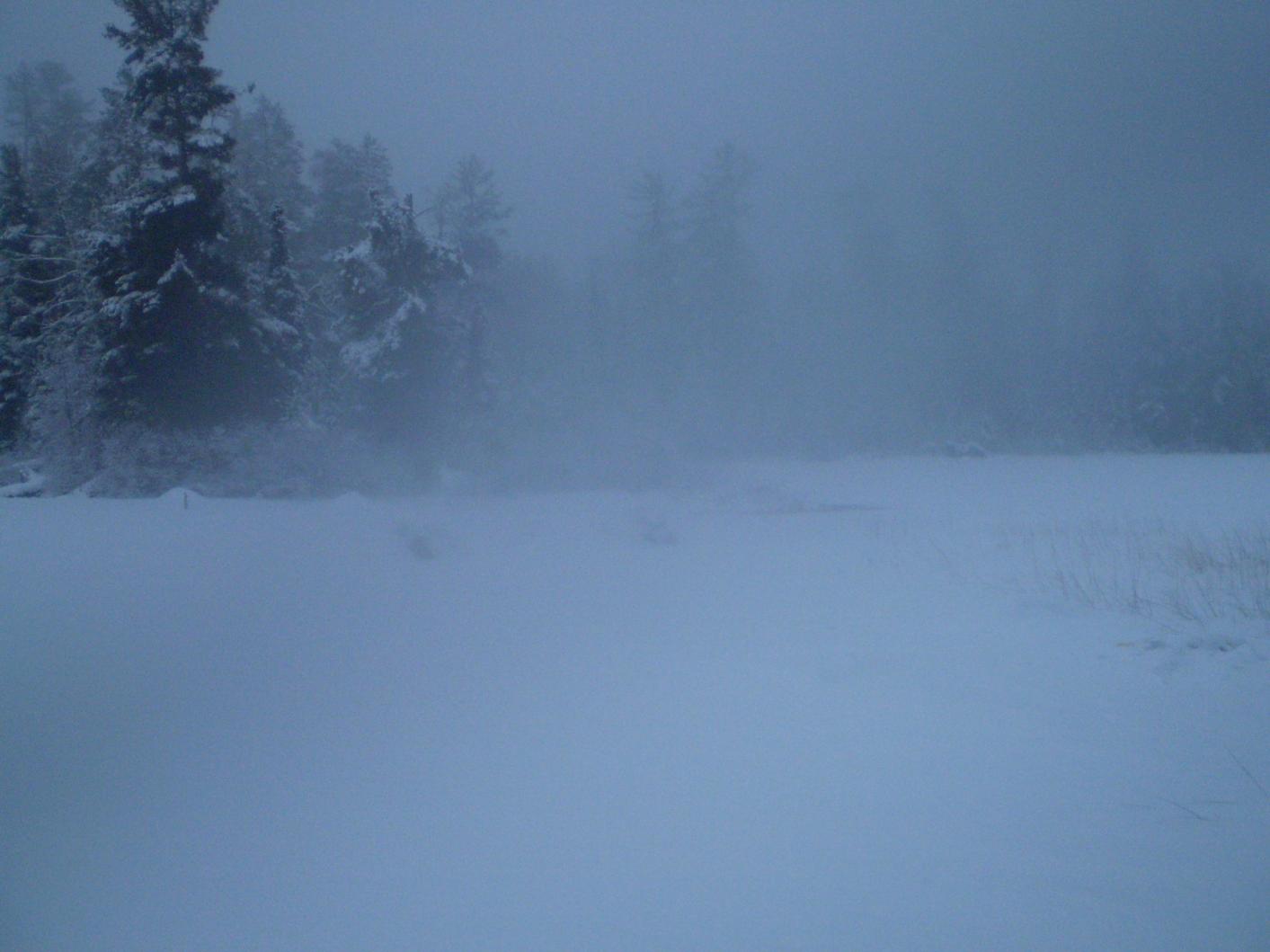 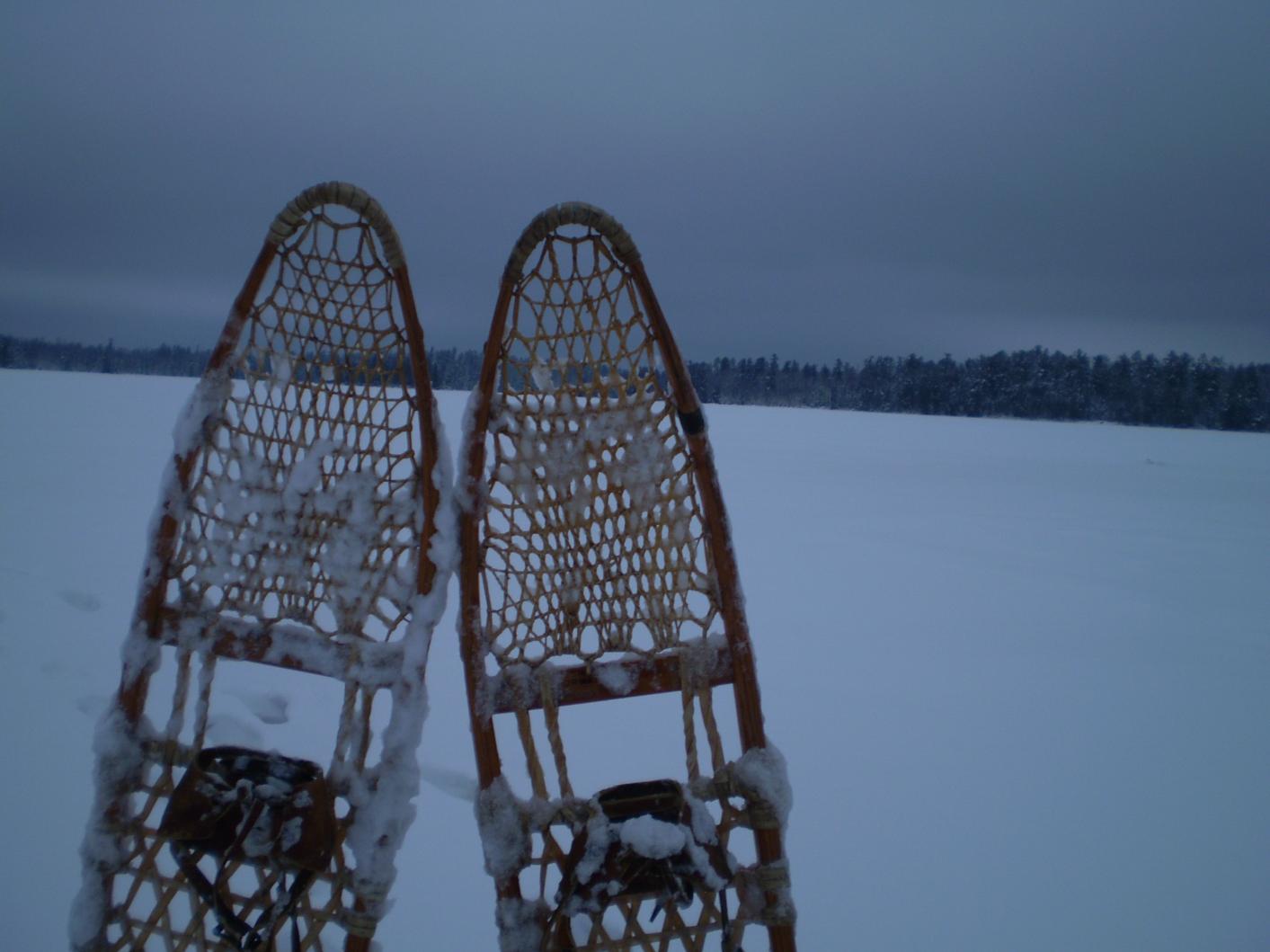 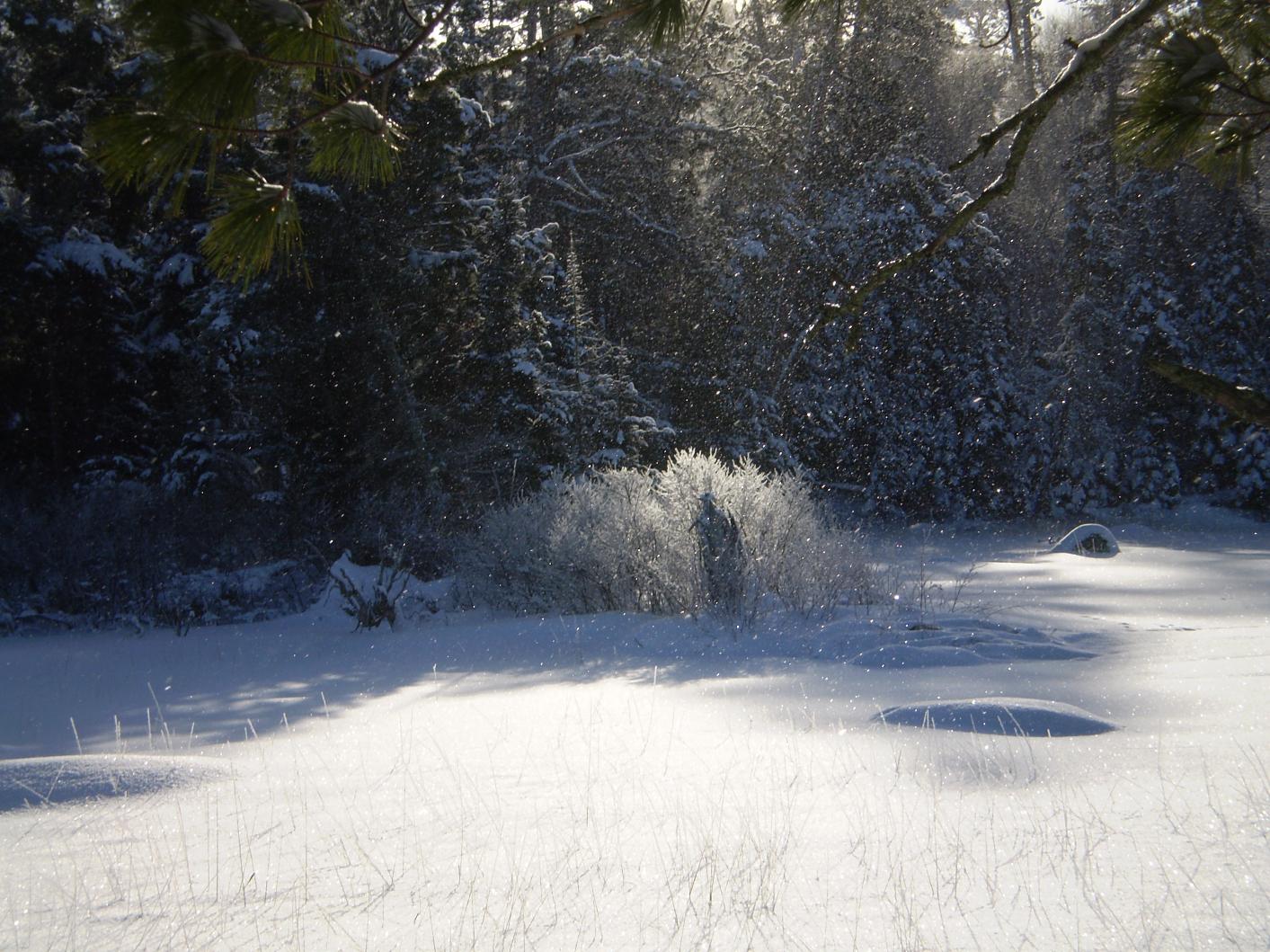 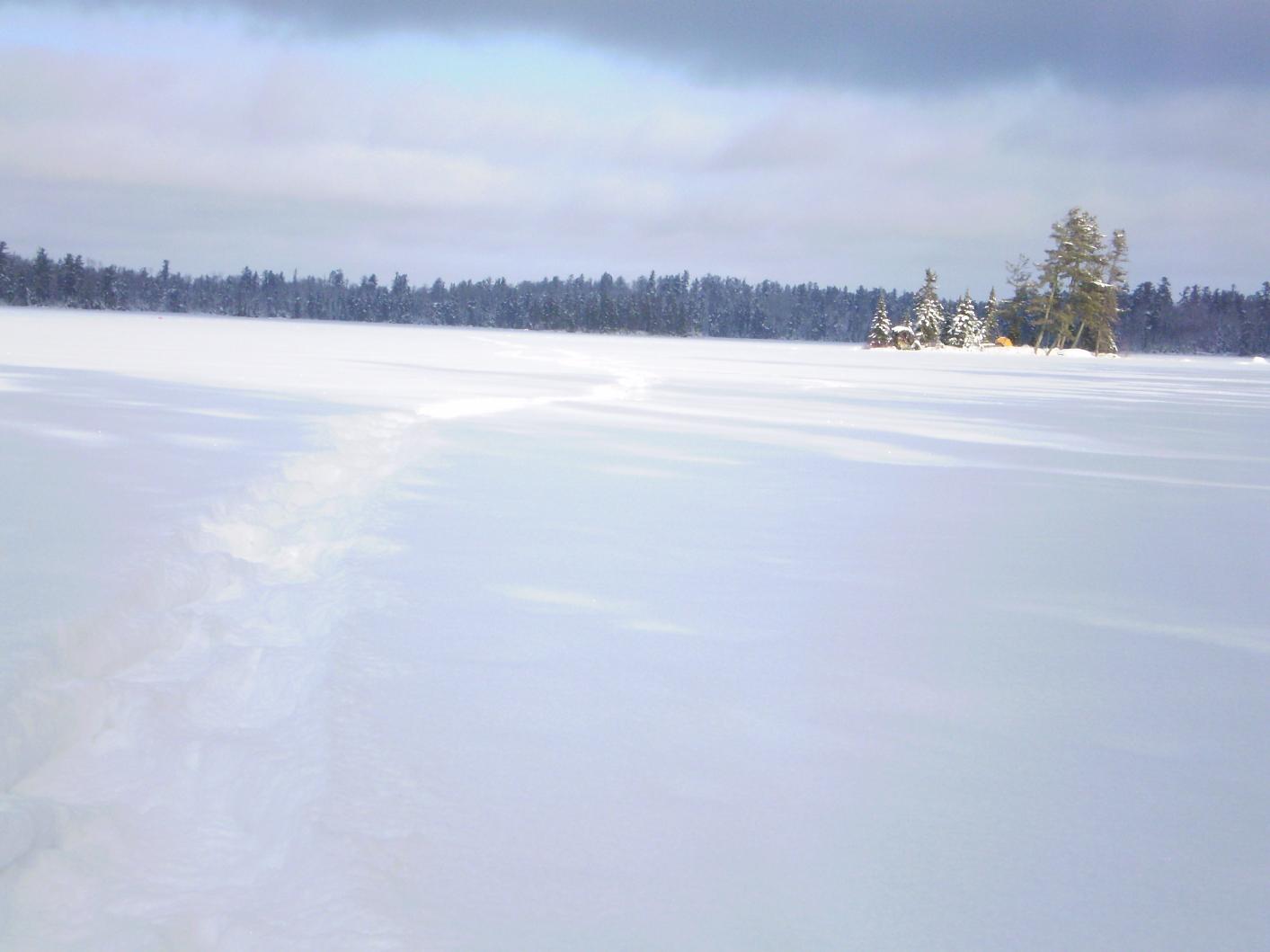 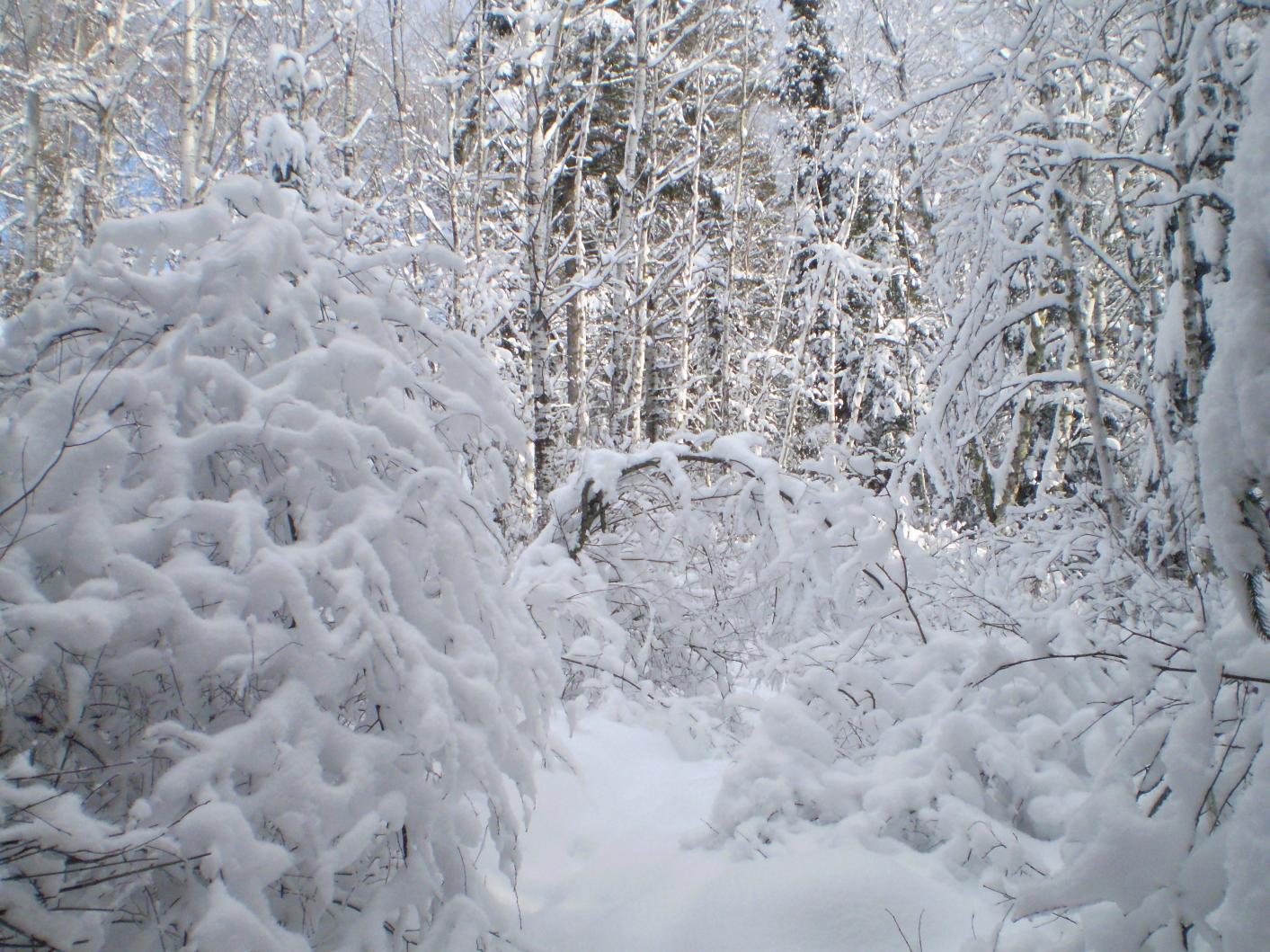