Trip Type: Paddling Canoe
Entry Date: 09/12/2008
Entry & Exit Point: Lake One (EP 30)
Number of Days: 4
Group Size: 4
Trip Introduction:
This is a short and sweet recap of the journey a few friends and I had into the BWCA last September (2008). Two of us (myself and Patrick) go up yearly but this is the first time that we had two additional friends join (Chris and Adam) and also a first time for this particular route and first time late summer/fall; it turned out to be a very memorable trip for all!
Discuss Trip: View Discussion Thread (5 messages)
Day 1 of 4
Thursday, September 11, 2008

The four of us all took off work a little early and met at Patrick’s house to load up the vehicle, strap on the canoe and hit the road. We had one little stop to make and that was to pick up a treat from Adam’s wife downtown Minneapolis; some carrot cake muffins for the road and an Incredible Hulk notebook to journal in! The ride up to Ely was pretty eventful, we got to listen to Patrick work via his cell phone and many inside jokes that would continue throughout the trip were created. Usually we have entered the BWCA from the Grand Marais side and this would be the first time we have entered through Ely. We made it to Ely and were a bit unsure on how close the Kawishiwi Lodge was and it ended up being a little farther out then we had expected. We called the lodge and asked them to stay open so we could get our permits that night so we could head out early in the morning the next day; they obliged! About a mile away from the lodge we almost ran over a wolf standing in the middle of the road, I think it was there to welcome us!

We finally arrived to our destination, the Kawishiwi lodge, just before 9:00PM. We checked in, got our permits, and headed to the bunk house.

We arrived to the nice little bunkhouse, which included a bathroom and kitchen, located right on the lake (great spot) repacked our gear, had some dinner, some beers and did a little night fishing on the dock (no luck).

We hit the sack around 11:30PM and were hoping to wake early to beat any crowds… 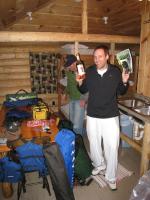