A (South) Wilder Trip
by L.T.sully

Trip Type: Paddling Canoe
Entry Date: 06/21/2009
Entry & Exit Point: Lake One (EP 30)
Number of Days: 5
Group Size: 2
Trip Introduction:
This trip had been a goal of ours for 2 years since we made North Wilder however South Wilder eluded us, South Wilder looked like a perfect lake on the maps, as it was a dead end lake no one would be tripping through, and it was a nice paddle from the Aluminum Highway of the # chain, we would soon find out if our assumptions were true.
Discuss Trip: View Discussion Thread (12 messages)
Day 1 of 5
Sunday, June 21, 2009 Having taken a slow 3 day trip up from Indiana we would enter Lake One from the Kawishiwi Lodge early Sunday morning. Waking up at 4:45 we took our time eating breakfast and getting ready to hit the lake. However as we speed the process along we would forget small but important things that it would not take us long to realize had been forgotten once we hit the water, I will save the big one as a “surprise” for the end. 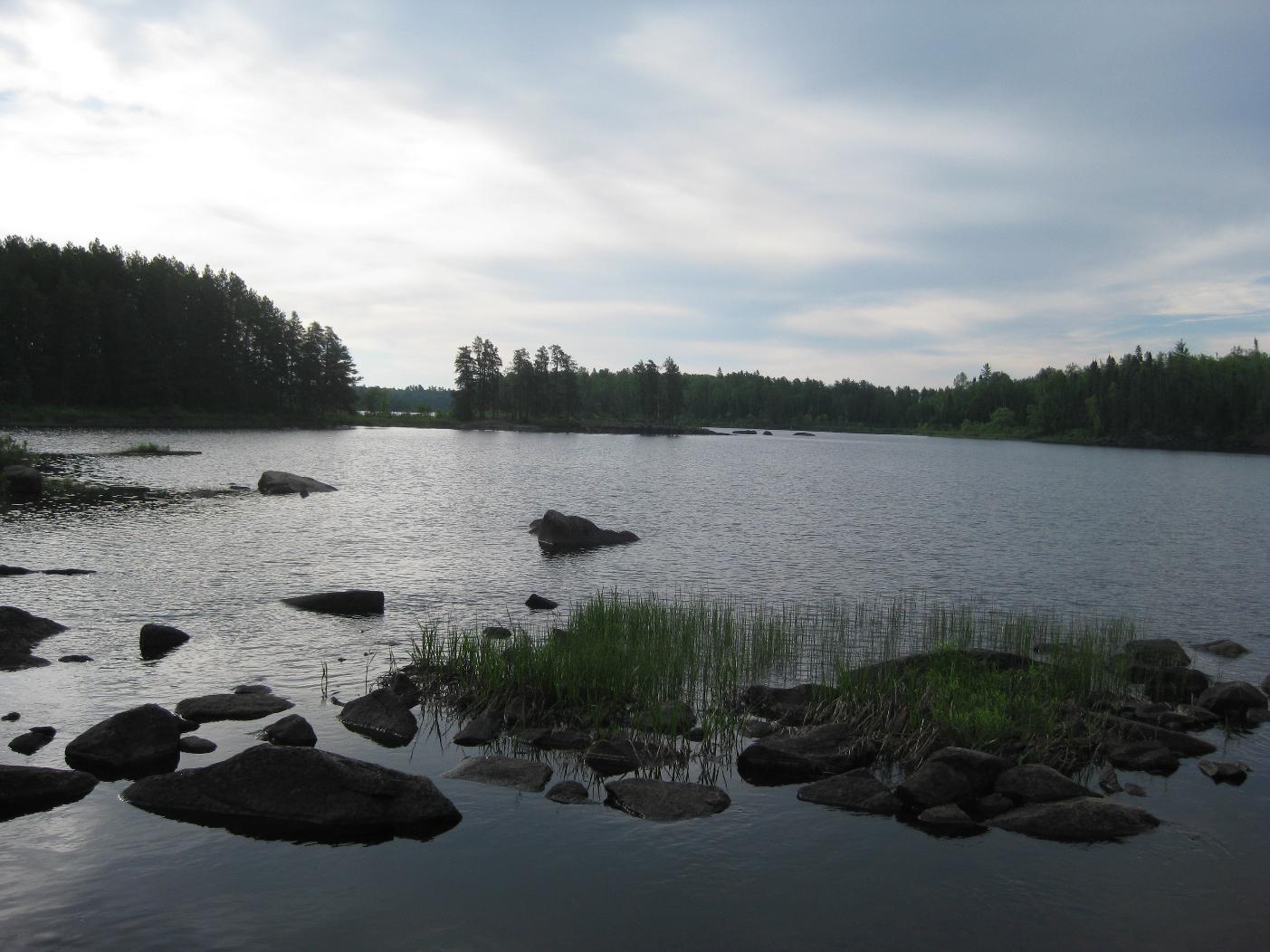 Once the canoe was loaded we set off a little after 6 in the morning, the mosquitoes were already terrible and we were killing them constantly while paddling Lake One. The morning is picture perfect however with water as calm as glass, and no one else on the water. We make good time to the first of the portages, but not before I remember that I forgot my sunglasses in the car, and the bright morning sun will not let me forget it. When we land on the portage we are instantly greeted by a swarm of mosquitoes like I have never seen before, this pushes us over the portage quickly, but the swarm follows us to the second portage, and I give in and use bug spray which I hardly ever do. Once we hit Lake Two we see the first group of the day going the other way, we were impressed at how quickly these people must have broken camp that morning as it was still hardly 7:00. The rest of the number chain is easy sailing and we only see a few groups in the other direction. The day begins to get warmer by the time we hit the series of portages from Lake 4 to Hudson, and while I want to take my long sleeve shirt off I don’t, but the mosquitoes aren’t as bad on these portages. 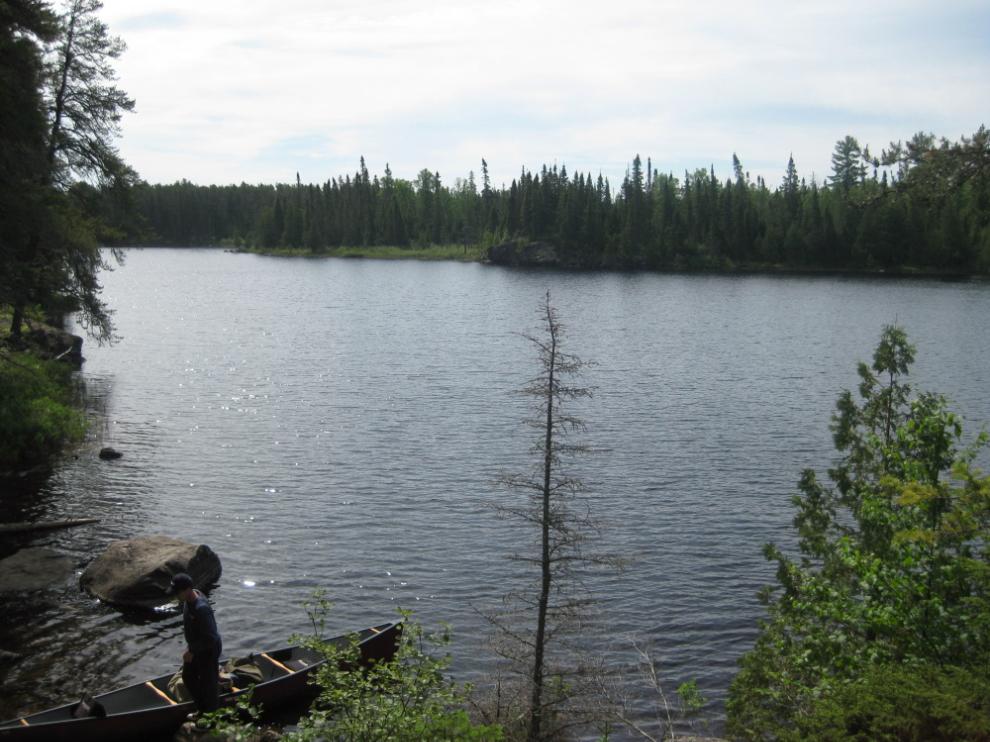 As we leave Hudson we hope that it will be the last time that we see anyone else for the next 5 days, until we return to Hudson. We have paddled the Wilder creek before, but not in this direction, that fact makes it tough when we come upon what seems to be a fork in the creek that is not on the map (in fact on other maps the creek is displayed but on our newer map it is only marked as a swamp, this creek goes to Zitka Lake) We make the right choice and follow the larger creek which is the real creek. After a few more twists we get lead to a new beaver dam which had not been there two years before, however it is mostly under water and is not too hard to push over. The portage to North Wilder is again a mass of mosquitoes which seems large enough to suck every drop of blood out of us if we were to give them a chance. The portage is the toughest one of the trip, 45 rods, a little overgrown, and a few patches of swamp. This time the rush to escape the swarm will be to our disadvantage as I attempt to push the canoe further into the water it looses balance and one of our packs is dumped, we quickly recover it, and after an exchange of pleasantries we are on our way. We eat a much needed lunch on North Wilder, and continue on our way to South Wilder. The creek to South Wilder is even narrower than the previous creek, and the twists and turns are tighter, making for a slow paddle. We reach the first beaver dam on this creek, and it is about 1.5 feet high, pulling over is easier than expected, but still a bit difficult as the water and muck is very deep on either side of the dam. The sun comes out again while we paddle down the creek and this keeps the mosquitoes to a minimum on the portage into South Wilder. The portage is flat and pretty easy except for the creek crossing, and the rocky path between the Pow Wow and South Wilder. Once on South Wilder we paddle along to the first of the two sites, this site is dark, overgrown, with no good tent pad, and broken down benches, hopefully we don’t have to camp here. The other site on the lake is much nicer, with a rocky peninsula, the largest benches I have ever seen, decent tent pads, and lots of wood in the site; it seems as if maybe 1 or 2 groups had been here before us this year. 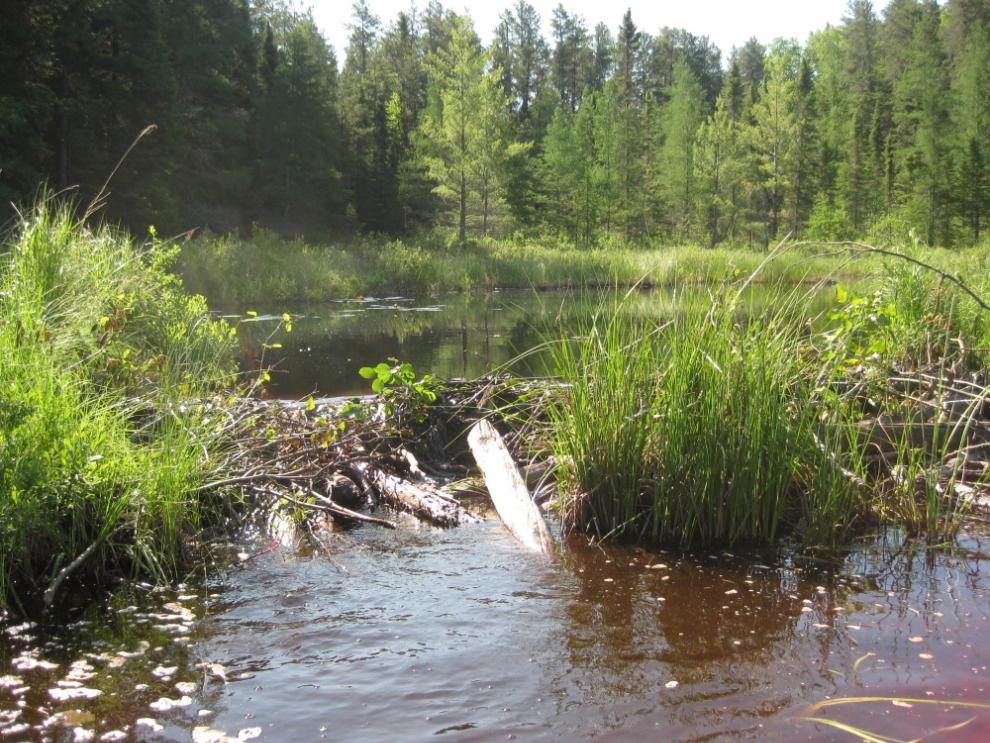 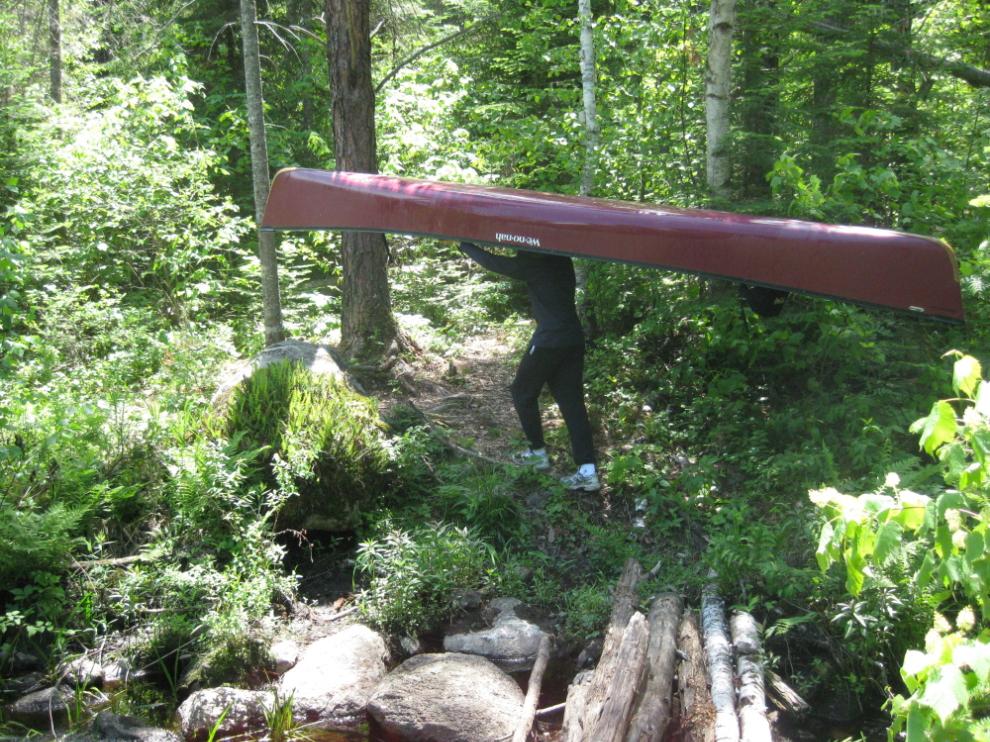 We make camp and get all the needed chores done, the wind has picked up, and we don’t think tomorrow morning will work out for fishing. Besides it might be hard to wake up as one of the only items badly damaged when the pack slid into the water was the alarm clock used to wake up for fishing. Dinner is steak, peas, and potatoes, it goes off without a hitch, and we button down expecting a storm to hit overnight. 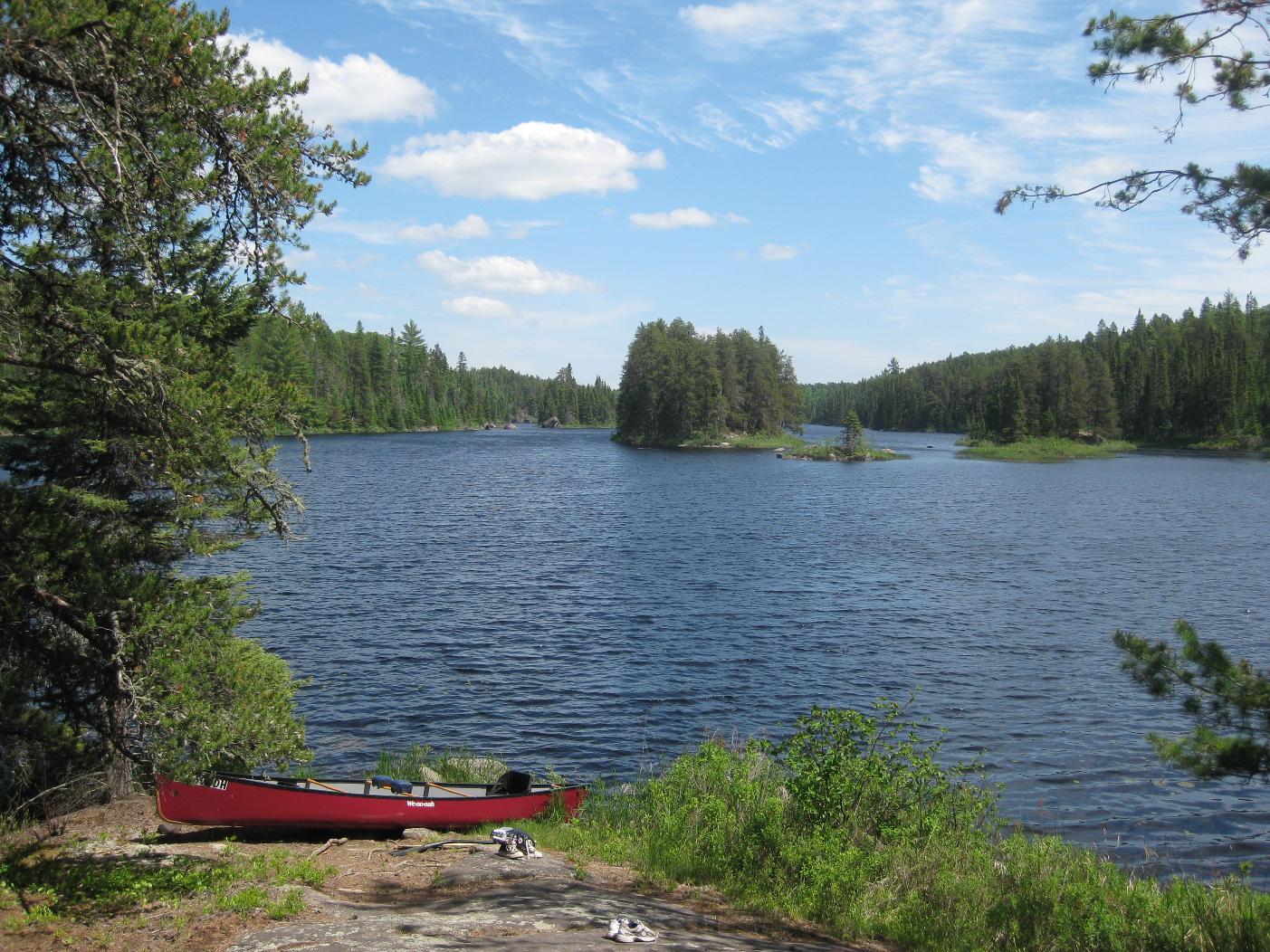 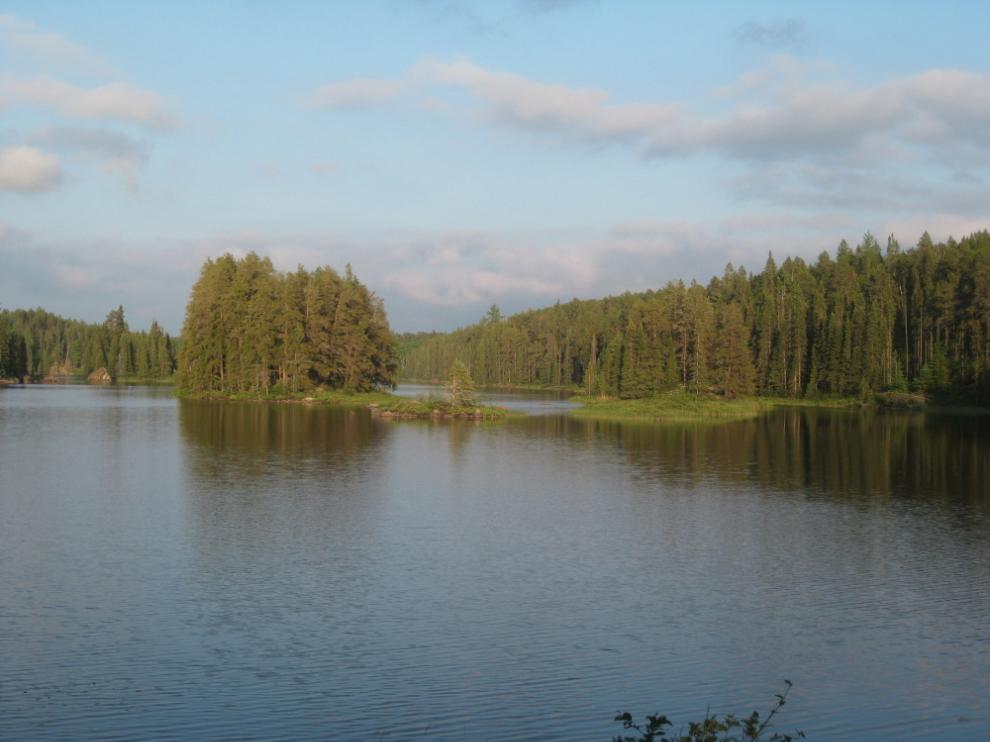