Trip Type: Paddling Canoe
Entry Date: 07/19/2009
Entry & Exit Point: Pine Lake (EP 68)
Number of Days: 6
Group Size: 2
Trip Introduction:
Discuss Trip: View Discussion Thread (18 messages)
Day 1 of 6
Sunday, July 19, 2009 We made it almost to Duluth without incident when "BANG" one of the front ratchet straps broke. CRAP! I slowed way down and we stopped at Holiday on the south end of Duluth. They had straps with the type of hook that will fit in the holes in the van so I purchased two - one to have just in case and we were on our way once again. It could have been so much worse. We opted to keep moving instead of stopping anywhere in Duluth for fun. We were just anxious to get going.

We got registered at Cascade River State Park and set up camp for the night. The park is beautiful, but noisy. The campground itself is very close to Highway 61 - we could even see the cars and trucks whizzing by through the trees . . .and can see Lake Superior. Still, I don't think I'd camp here again - I like the peace and quiet at Savanna. It will be quite the contrast camping at McFarland tomorrow vs. this one so close to the road.

As we were setting up camp we realized that Emily forgot her sweatshirt. We looked at them in the Park office, but they were pretty spendy. Grand Marais was only about 10 minutes away so we drove into "town" to find her a sweatshirt. We visited a couple of over-priced tourist trap stores $60 for a sweatshirt? I don't think so. Finally found a store that had lots of shirts and they'd put the print she wanted on while we waited and only $20. Okay - I can handle that price. Emily is so funny; she said something to the guy helping us about knowing some Russian and he actually spoke Russian. Made me chuckle.

When we got back to the campground we got the fire going to make supper. The wood was nice and dry. Once we had some decent coals going I put my steak and her chicken on the grate. I let them cook for a while and when I went to turn them I pushed the chicken right into the ashes. Good grief. I had to take a picture of that of course - it was hilarious - we laughed so hard. I picked it out of the ashes, rinsed it off, put a bit more bbq on it and put it back on the grate. Must have tasted okay because she ate the entire thing. I had my steak - it was tender, juicy and ooohhh so good - just the right portion - I ate the whole thing.

It's been fairly chilly all day - at one point the van temp gauge said 62*. It's about 6:30 now and the thermometer on my backpack says 50* already. The forecast is for lows in the 40's. We decided to bring an extra pack with blankets and double portage or leap-frog them. I'd rather be warm. I’m chilled right now and I have long-johns, fleece and flannel on. BRRR! But we're also so close to Lake Superior. I think that makes a big difference.

It's so early yet and I'm so ready for bed. I'll try to hold out 'til at least 8pm - too early to go to sleep right now. Em's reading and I'm, duh, writing. The sky is crystal clear. The campsite is very secluded - except for the fact that we can hear the road noise. There a big old cedar tree in our camp site - probably 3'-4' in diameter. Not as big as the ones we saw in Washington, but still pretty good sized. There’s a little red squirrel that's been looking for handouts or dropping - he'll be disappointed as we're pretty clean - other than dropping the chicken in the fire.

8:58 pm - we're both pooped and ready to sleep but it's still a bit early. As the sun was setting after supper we went for a walk and explored on a trail. It looked like an ATV trail and it lead down to Hwy 61. There were three big stumps from trees - couldn't tell what kind as they were cropped close to the ground. Em said "that's such a shame" and I agree, however, it could be that they fell from age, storm or disease. Along the path the wild flowers are blooming all white, yellow, orange and purple - they're so pretty. Across Hwy 61 was a picnic area with trails leading down to the lake. We followed one that had big stone steps. We walked through a grove of aged, crooked cedars. I'm now wishing I had my tree book with to tell which kind they are. At the end of the trail was a typical Lake Superior "beach" - all enormous boulders. On our way down we scared a flock of Canadian Geese that were sitting in the water near the shore. We took photos 'til the camera batteries died and walked back to camp.

The fire felt nice and warm tonight - we can see our breath ...brrrr is gonna be cold. As we were getting into the tent a large grouse flew up into a tree next to the tent - was too dark to get a decent picture. Oh well. 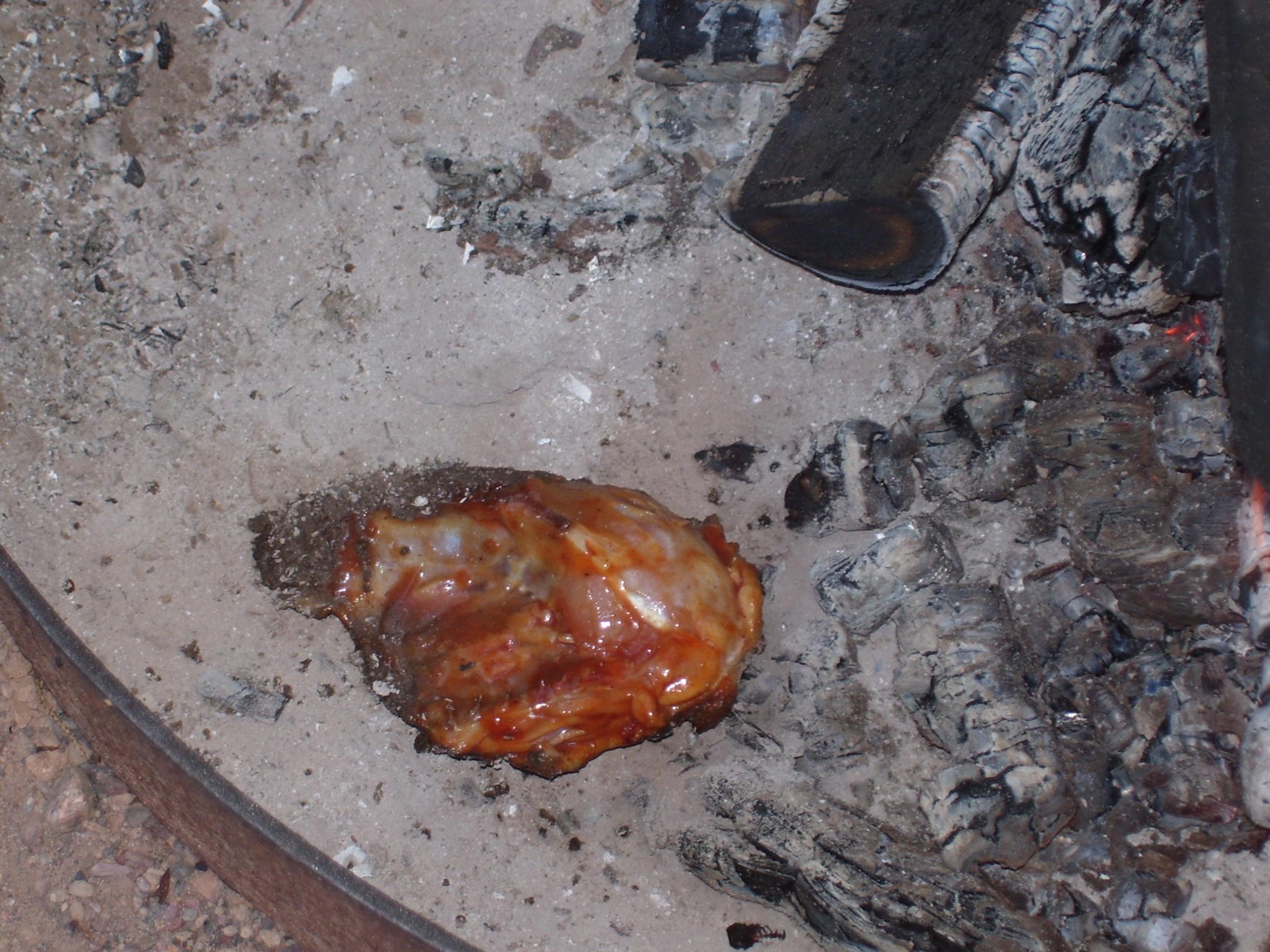 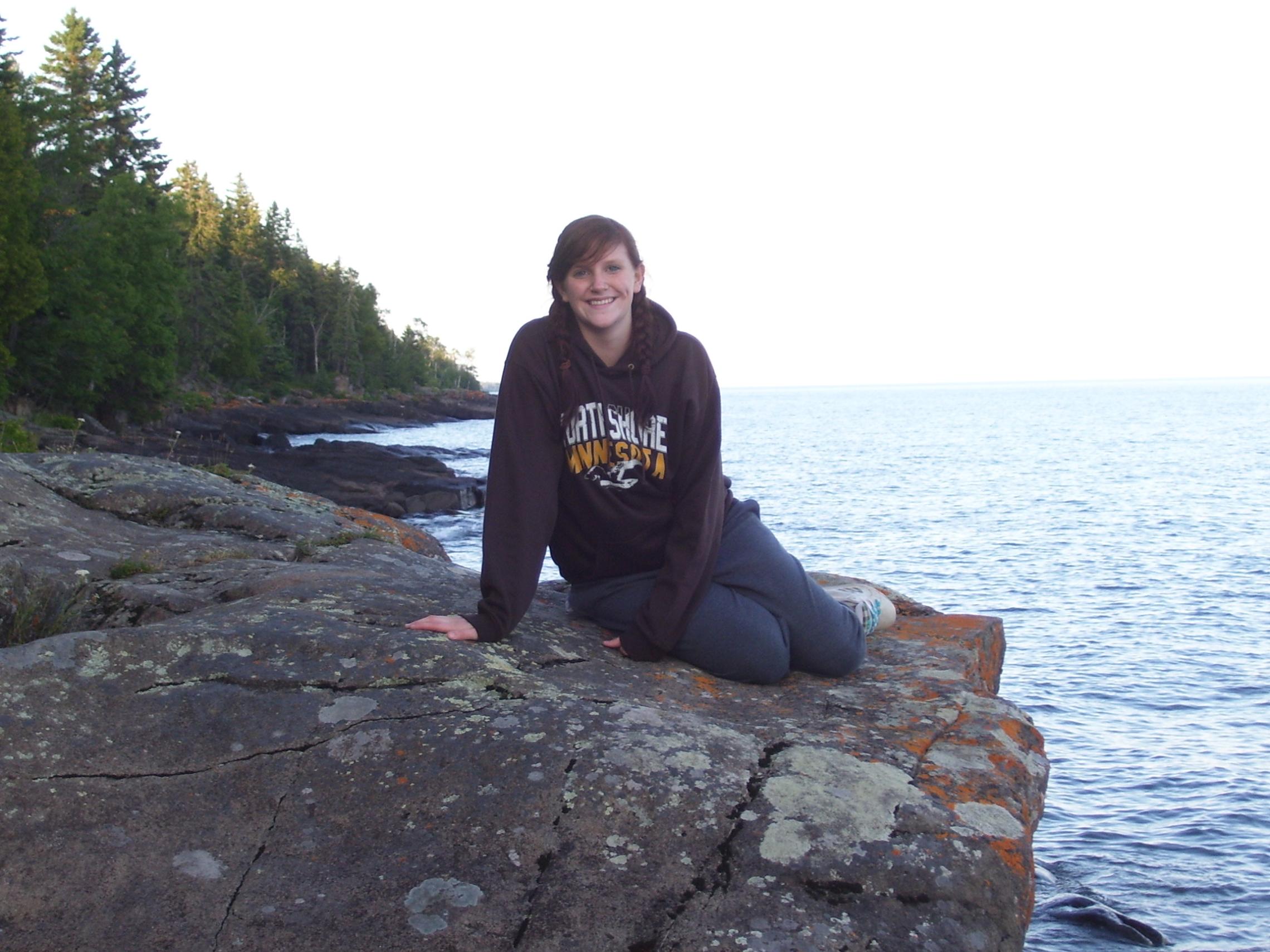 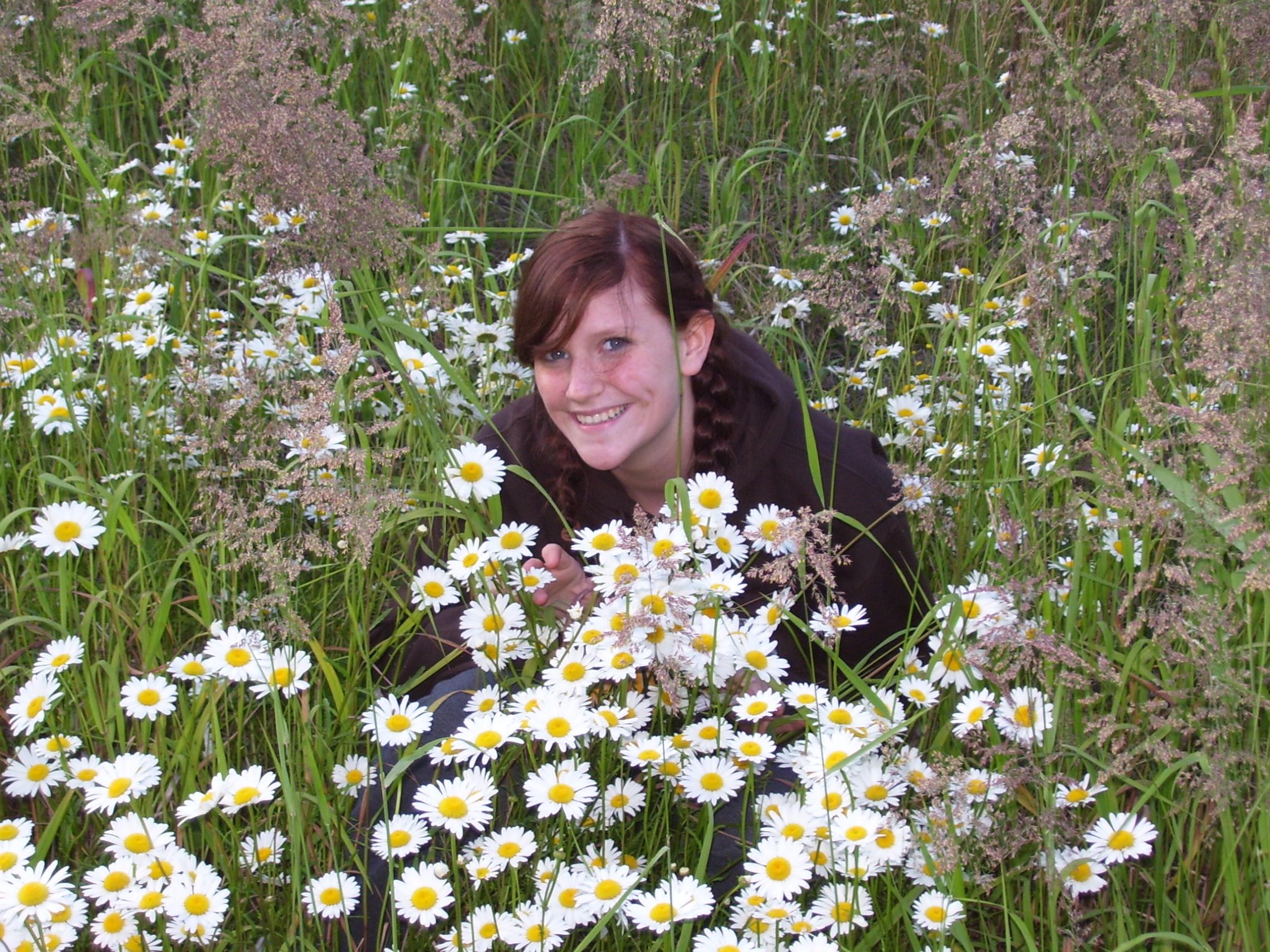