Isolation on Clearwater Lake
by nojobro

Trip Type: Paddling Canoe
Entry Date: 08/18/2009
Entry & Exit Point: Snake River (EP 84)
Number of Days: 6
Group Size: 2
Discuss Trip: View Discussion Thread (40 messages)
Day 2 of 6
Wednesday, August 19, 2009
We were up with the sun and had breakfast: “Cinnamon Sugar Couscous,” a freezer bag cooking recipe. Very filling and delicious (basically: couscous, toasted walnuts, cinnamon & brown sugar). I enjoyed a cup of tea to ward off the chill (it was in the 50s), and John drank hot chocolate. The lake this morning had a fine mist drifting across it, and the water was calm, though not quite glassy. A beautiful morning. We packed up camp after doing dishes (rinsing out our cups, licking off our spoons, and tossing away the plastic baggies from the couscous) and we were off. Destination: the Bald Eagle – Turtle portage.

Reviews of this portage are mixed. One report calls it the toughest one in the BW. I doubt this, but still, I’ve never done a remotely tough portage so I was leery of how it would go. The landing is easy, but the ease ends there. Up, up, up the rocky trail it goes, then levels out in a flat muddy place. It goes up some more, though more gently, and at the Clearwater end it goes down in a steep and rocky way to a difficult put-in spot. I won’t lie and say the portage was easy; I was really tired at the end. But, I did it, and I did my two loads without any help from John. On the return trip to get the second load, we enjoyed stopping to see a big crevice in the rock with water at the bottom. We thought it looked like something Bear Grylls would climb down, perhaps to find another route to the put-in on Turtle. This was further reinforced later when visiting the campsite at the Turtle end of the portage; someone there had made a homemade shelter…Bear Grylls was definitely here.

We were having trouble getting going at the put-in, and I remembered that there’s an easier put-in at the neighboring campsite. He was able to get off all right alone (we could only get half the canoe free of rocks at a time, apparently), and I went over to the campsite to hop in over there. That worked well, though it probably would have been better just to go there in the first place.

The sky was clouding up more and more as time went on; we knew it was going to rain sometime in the near future. So we paddled right across Turtle, not stopping to try to catch a pike or two. I felt an urgency to get to Clearwater and set up camp. One side of Turtle is nicely forested, and the other is in a re-growth stage from a 2006 fire. We paddled reverently by a former island campsite, rated a 5-star site by someone on this board. Through the charred trees that stand watch over the re-growth below, I could see the site’s former glory; it was a little sad to see it gone. As for the rest of the burned forest, mostly what I saw was the chance for a delicious blueberry crop.

We weren’t disappointed in the blueberries. On the Turtle – Clearwater portage, blueberries (and a few raspberries!) abound. On our empty trip between loads, we stopped to enjoy a few handfuls of the delicious berries, even though the rain was still looming. There were also some on the BE – Turtle portage, but not nearly as many.

The portage to Clearwater is pretty long, over 200 rods, and very, very rocky with a few muddy places thrown in. But, mercifully, it’s relatively flat. We met a couple young men along the trail; they were coming from Clearwater, where they’d stayed at the first campsite from the portage and enjoyed its small sand beach. We wished one another good trips and passed on by.

On Clearwater, we headed straight for the campsite we had in mind: the second one from the portage. This site was recommended by spottedowl, and we were eager to get there to set up our site, as we could tell the rain was imminent. And sure enough, no sooner did we land than the rain started falling. We put up a tarp and put our gear under, and made lunch. This time, it was “Potato and Bacon Chowder” and more “Veggie & Bacon Salad.” John liked the chowder very much but I thought it was so-so. The salad was, again, awesome.

After lunch, we finished setting up camp (doing the fastest set up of our tent ever, because it was still raining steadily). There are several tent pads on this site, the two best being one in a circular grassy clearing behind a rotting log, and another nearby, almost right on the lake, on a tiny bay on the side of the campsite. We liked the look of the lake one a little better than the grassy one, based on beauty, I suppose, but we decided the grassy one was the better choice given the current weather conditions. By this time, I was starting to realize that my rain gear was crap. I was getting decidedly damp. I was wearing every stitch of my clothes, except for what I planned to sleep in and an extra t-shirt, and I was not that warm (this is 6 layers: wool t-shirt, quick dry long sleeve shirt, fleece jacket, fleece pullover, poly sweatshirt, and rain jacket, with rain pants and quick dry pants on the bottom). I hoped I wouldn’t have to resort to getting into my sleeping bag just to stay warm, and started to be paranoid about my clothes getting all wet. Mostly I had quick dry and water repellent items, but if my rain gear became completely useless...

(Meanwhile, John was sitting in the lake on a rock pumping water, wearing his zip-offs and a t-shirt. He took off the drenched t-shirt when he came back and put on a fleece jacket and his rain jacket, but left the pants alone. I would have been hypothermic if we had changed places. We have vastly different temperature tolerances.)

Our tarp wasn’t faring too well in the wind. We decided it would last until bedtime, but then it would have to come down for overnight; we’d take it down and wrap it around our gear to try to keep it dry. The food pack was just going in the bushes by shore; John wasn’t happy with the bear trees and it seemed like the bad weather would continue all night, and we told ourselves no bear would be out, anyway (don’t know if that’s true, but it worked for us at the time). We made supper; another freezer bag meal, “Cheesy Hamburger Wraps.” Very good! Definitely a keeper. Chocolate bar for dessert. We drank hot drinks. We wrapped up our gear in our tarp, and scuffled off to bed, at only 8 pm. It was still raining. I was pretty soaked through my rain gear and the top layer. My sleeping bag never sounded so good! We both fell asleep pretty quickly.

Three hours later, we were awake again. The rain had stopped, but the winds were positively howling through the trees. It didn’t seem like it was getting down to us very much, or our tent is very good in the wind (likely this was part of it; it’s very small and short). The winds were swirling and shrieking; they and the dark seemed to press down on us. I thought I should be able to hear the water from the lake, the waves on the shore, but the sound of the wind drowned out all other sounds. I knew we were the only people on the whole lake, and the young guys we passed on the portage were going to Bald Eagle; likely no one was on Turtle, either, especially since there is only one halfway decent campsite on the lake (the others burned). There was probably no one on Pietro to our south; the campsites there are all burned from the fire, too. The people were over on Bald Eagle, two hard portages away. In the way of the night, paranoia started creeping in and I started to wonder why the hell I’d come this far away, why I’d left my girls so far behind me…how could I have left them to come here and risk myself like this? What if something happened to John? What would I do? Because I had to admit that I was quite a bit dependent on him. What if I had to go for help by myself? We did have a satellite phone; on Bald Eagle I could not get it to work. On Clearwater, it did work…and there were no messages from my mom. No news was good news on that front. But would it work if I really needed it to? What if a tree crashed on us and it broke? What if, what if, what if... Extreme darkness and winds do not a restful night nor a calm mind make. I began to feel very vulnerable.

In the midst of this, John declared that he had to go to the latrine. Of all the times! He ran out, did his business, checked that our food pack was still okay, and reported that the lake was full of whitecaps. I was just glad he was back in the tent, safe and sound. At least, as safe as we possibly could be in the tent in the storm.

Somehow I managed to get back to sleep. It was a fitful sleep while the winds still howled, but as they let up I slept better. 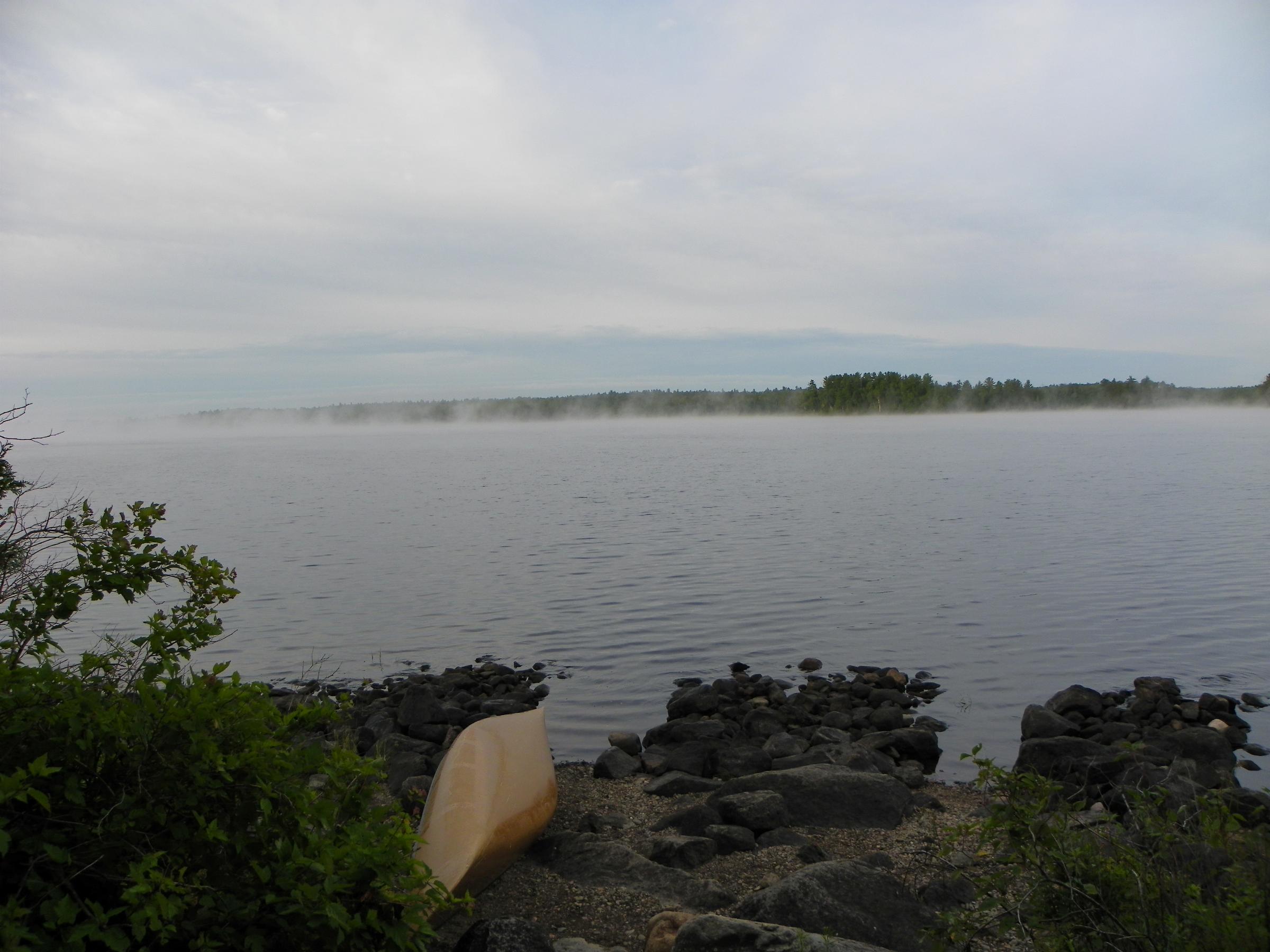 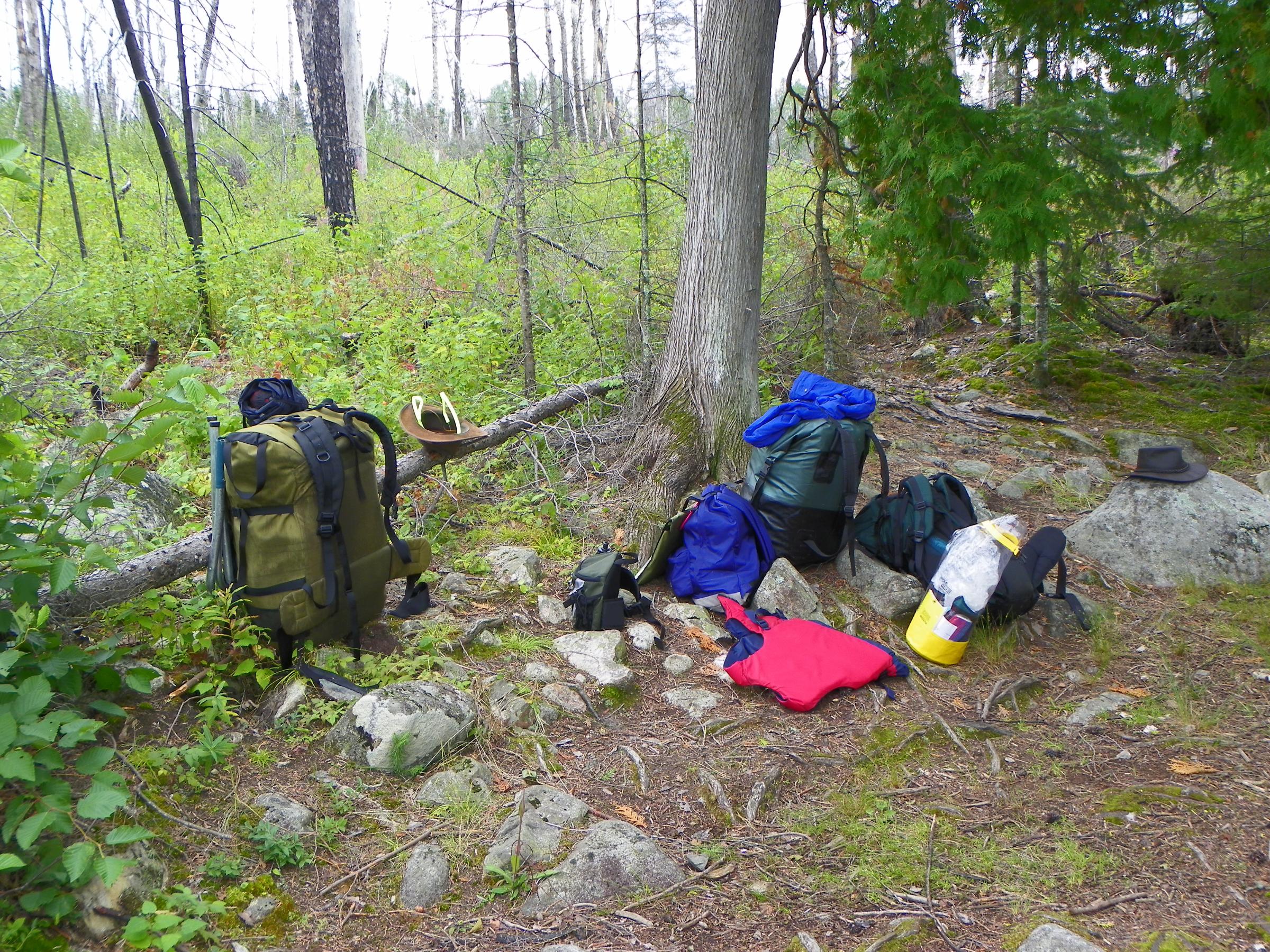 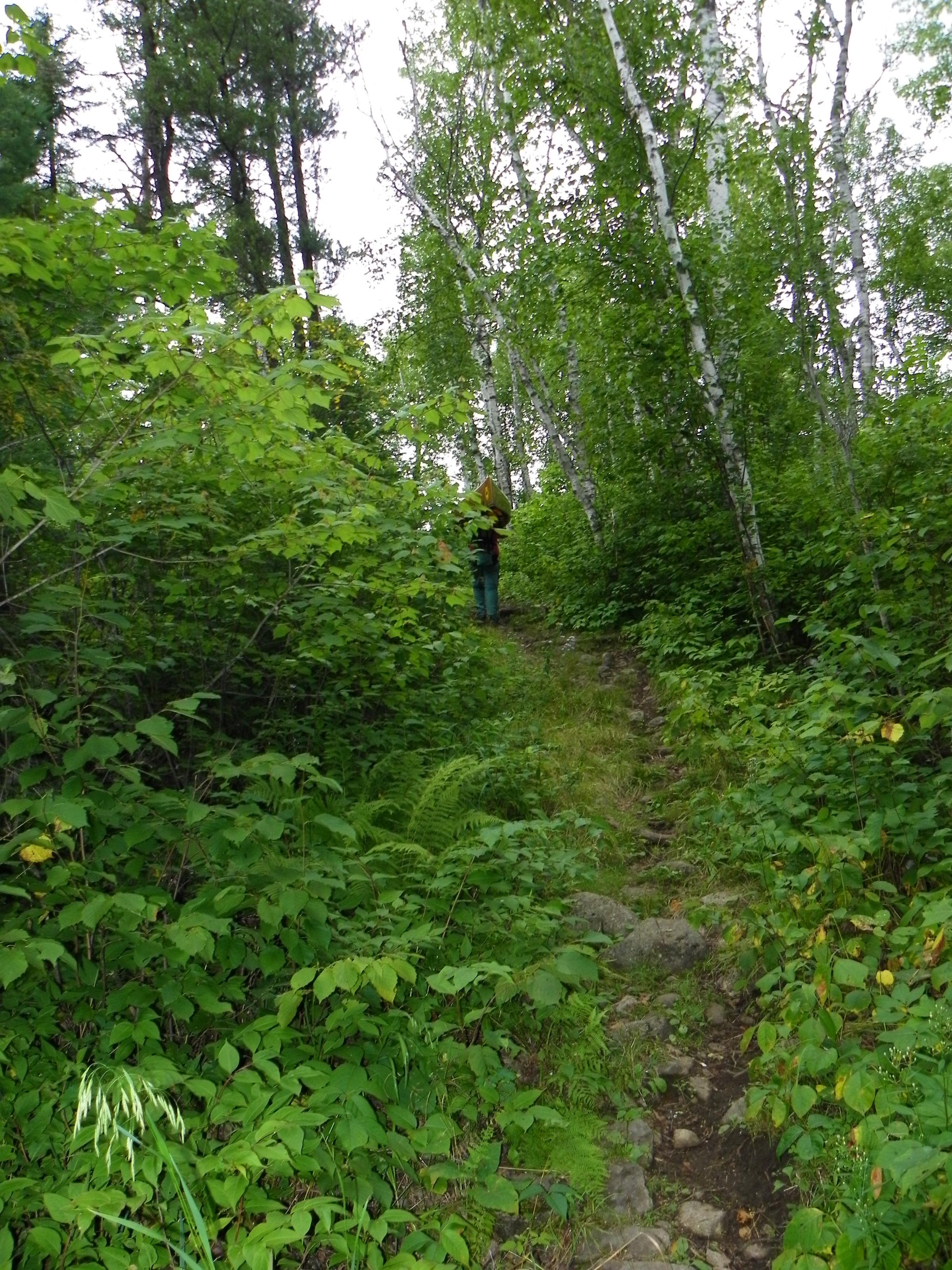 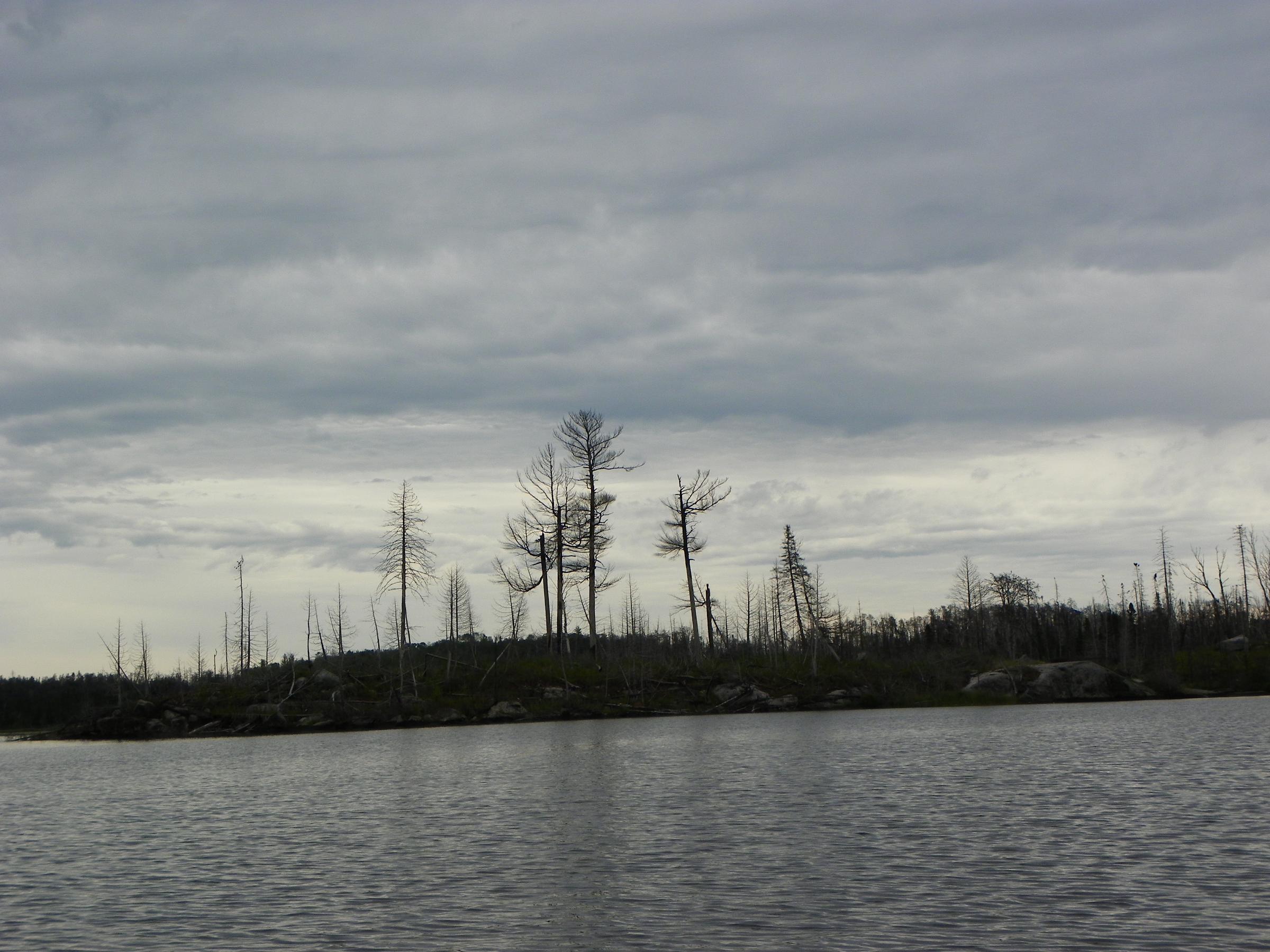 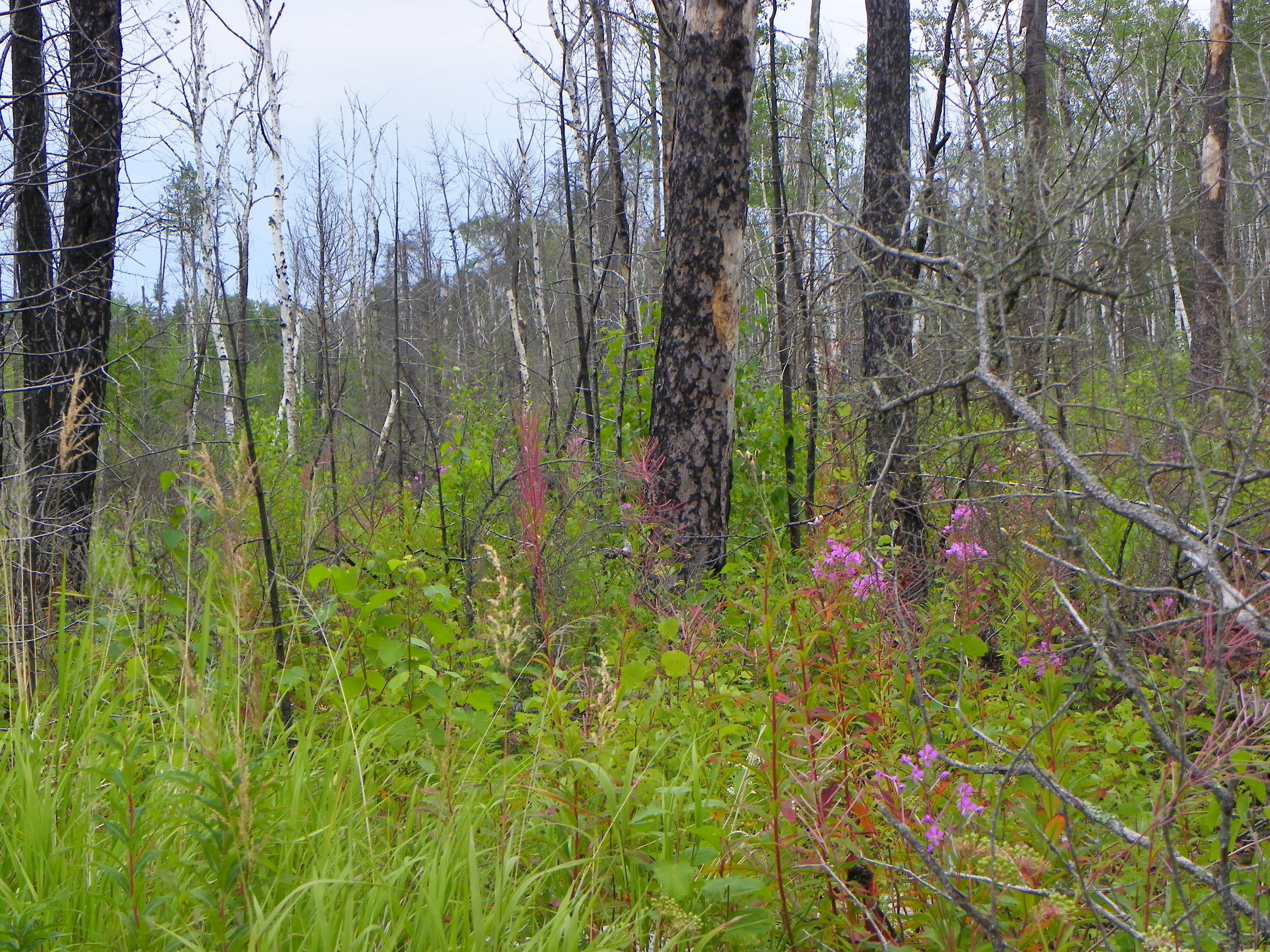