The Gunflint Shows Its Beauty, Again
by Boppa

Trip Type: Paddling Canoe
Entry Date: 08/30/2009
Entry & Exit Point: Lizz and Swamp Lakes (EP 47)
Number of Days: 6
Group Size: 2
Discuss Trip: View Discussion Thread (28 messages)
Day 3 of 6
Another nice day begins, and I am pleased to awaken with the sinus headache much subdued. The night temps were mild 45 - 48 degrees. I was down by the waters edge after breakfast and about 100 yards out I notice a figure swimming across the lake, it is unmistakably a bear, and not wanting my Bow Partner to miss this sighting, I call to her to come over. She does, sees the bear swimming and is as captivated as I am. The bear hearing my call, stops swimming and is looking over at us. It decides to turn and swim back from where it came. This surprises us as it was a much shorter swim to continue to the shore it was swimming towards. When it reaches the far shore the bear climbs out and turns and looks at us for 20 seconds and then vanishes into the woods. This is our third bear seen while canoe tripping over these years and all three bears have been swimming when we notice them. Hmmm!

My Bow Partner mentions shortly after this sighting how she would like to see a moose again this year, so I mention that Horseshoe Lake has a great reputation for moose sightings. She looks out at the lake and says "lets check it out", and our focus becomes breaking up camp and getting a site on Horseshoe. As we were finishing our packing chores, a soloist paddles into the arm, he spots us, and turns to the lesser site. I wave my arm to beckon him so he would be aware we were leaving in the next 10 minutes. He saw me, and returned the wave, but I don't think he realized in was an invite. We hope he sees us leave and realize the site would be his if desired.

We pull out and were back at the portage to Horseshoe some 30 minutes later. As soon as you paddle on Horseshoe Lake it has a moosey feel to it. First we check out the site to the east; it is a nice spot, its only draw back for most is that it has only one small tent pad. We wanted to check out another site which had some nice observation points to the north and east , the one with the noisy group of guys that I mentioned earlier, #675. As we paddle by we see it is still occupied, by the same group, one sees us and we say hello, he asks us where we might be headed, my Bow Partner says "looking to stay somewhere on Horseshoe" and we bid a goodbye to each other with a wave. We go down the west arm to two more sites, the first on a point facing west is very nice, but we want to check the site further down. As we paddle near to it we realize it is already occupied, they must be day tripping as no one appears present, it appears to be very nice as well. We turn and quietly make our way back to the previous site, when I ask if this one will be our choice, my Bow Partner wonders out loud if we will be far enough from the loud group; I am not sure. As luck would have it, up ahead at the beginning of this arm we see the two canoes from that site packed and paddling away. We continue on and yes the site is vacant. It has a nice put in, a great fire grate and three pads to choose from and a nice place to hang our food. It indeed has some excellent observation areas and one spot has a improvised bench just made for relaxing and viewing. Boy, do we feel lucky for the second time. It does make me think why didn't the tripper who spoke to us at this site earlier mention they were in the process of leaving? Oh well, shouldn't think negative thoughts, particularly since we ended up at it anyway.

As we were both involved in our separate set-up chores, we heard a close and distinctive crash in the woods and instinctively stopped to listen. We hear it again and look at each other with smiles as we realize it must be a moose coming thru quite close to our camp. The noise is not heard again, nothing is seen and we go back to our chores. About 45 minutes later while we are around the fire grate, 3 canoes with multi-generational ages go by. We wave and the young man in the stern of one tells us they just passed a moose feeding; we mention that we just heard one come close to camp. They continue on their way and we walk to a rock overhang and look to a cove where a large cow moose is feeding loudly and undisturbed. We watch for more than an hour and all of a sudden hear a call from a tree across from us. An eagle is sitting there and has started to call, at first I thought it might be the moose bothering it, but as I looked around I spotted another eagle flying our way. As this eagle flew or I should say swooped the other would call. Soon the eagle in flight quickly drifted away and the eagle perched above us quieted down and sat for another 30 minutes before flying off. Well between the moose and eagles we had a late dinner so we could accommodate such a special day; next the moon is rising and we are mesmerized by how much light a full moon can provide. It truly doesn't get any better than this. 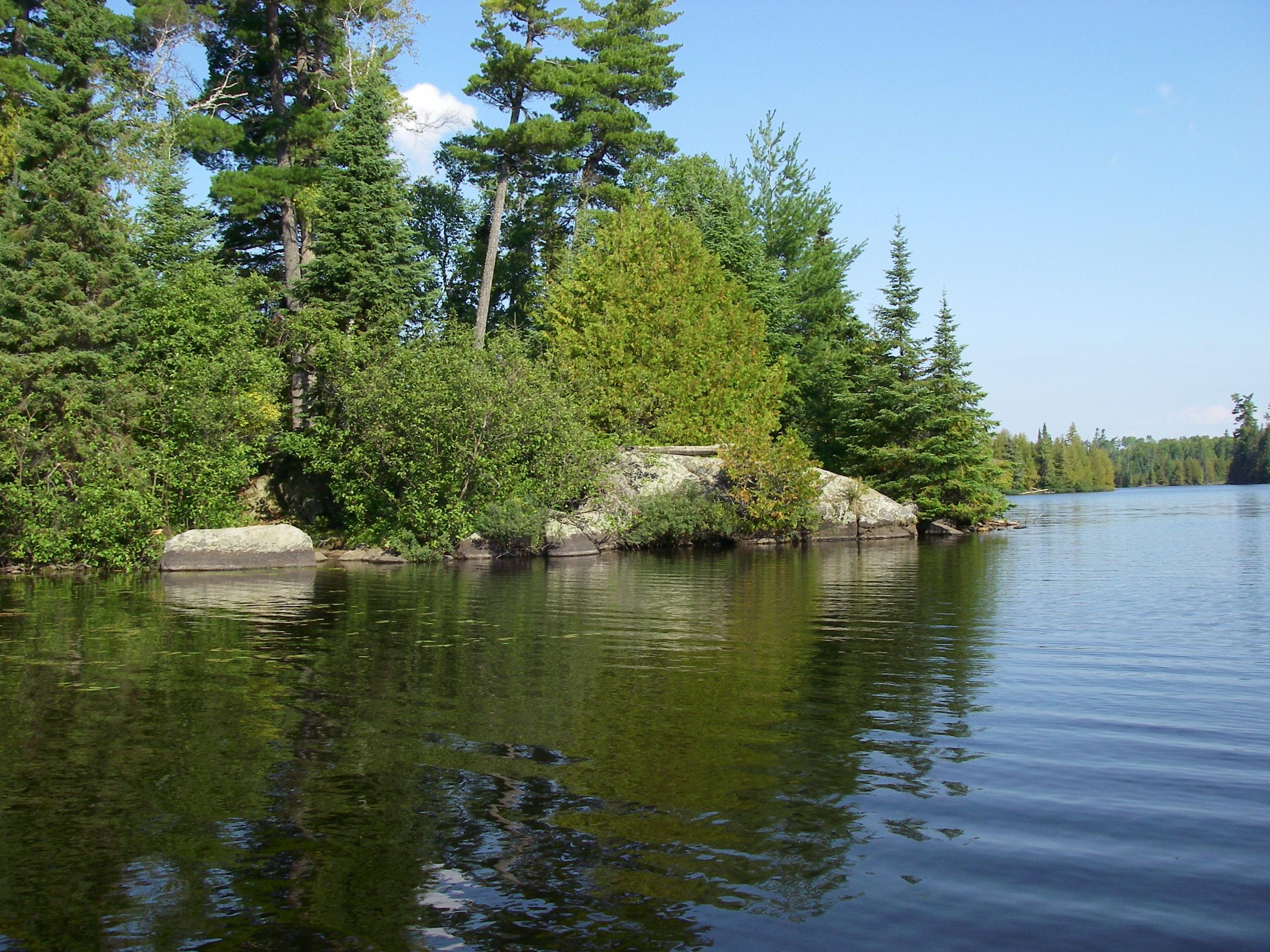 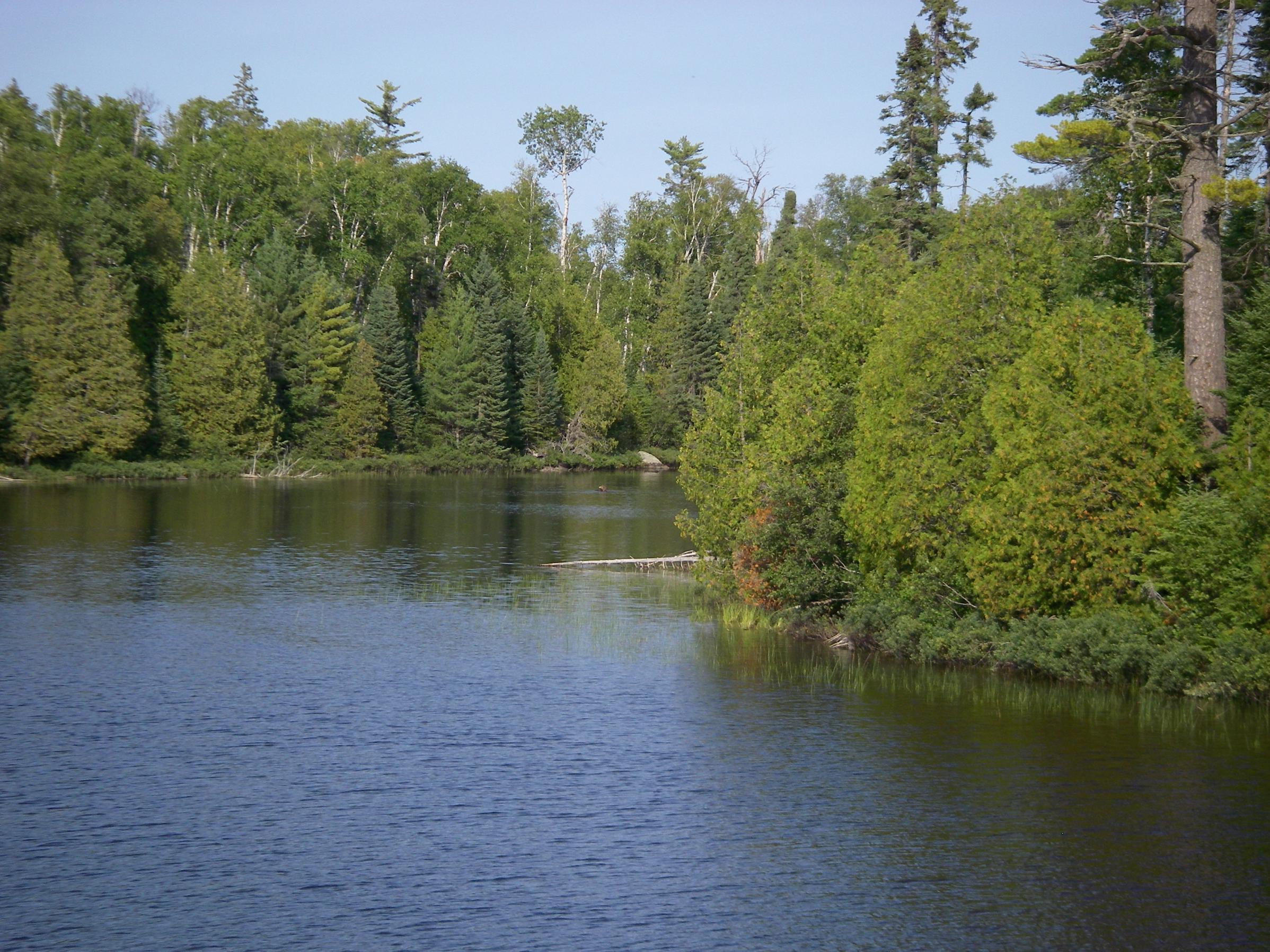