Trip Type: Paddling Canoe
Entry Date: 08/11/2009
Entry & Exit Point: Stuart River (EP 19)
Number of Days: 4
Group Size: 2
Trip Introduction:
A father and daughter try something new
Discuss Trip: View Discussion Thread (18 messages)
Report
One day last Spring, I asked my daughter if she wanted to go to the BWCA as I had in my youth. We have 7 kids, 6 boys and my daughter Katie, and I haven't had as much one on one time with her as I have had with some of the boys. I was surprised but pleased when she texted me "that sounds great." I made some calls, and hooked up with one of the outfitters. Permits were hard to come by, but for our dates the Stuart River EP was available. The guys at Piragis asked if we would mind a long portage to start-I thought why not, so we had our permit. Its been 20 years since I have done this sort of thing so my equipment needed upgrading. I was determined to single portage, so I bought the biggest portage pack I could find, and loaded it up with the "essentials." I figured I could carry the big pack and canoe, and my daughter-all 120 pounds of her could carry the food barrel and a day pack. Everything was coming together as the day approached. I found by sitting on the floor, getting the portage straps on, and rolling over, I could actually lift my portage pack off the floor, (a few inches at first). A couple of trips around the house, convinced me single portaging was possible. The day arrived, and Katie and I drove to Ely-about 8 hours from our home in the Upper peninsula of Michigan. We got the canoe from the nice folks a Piragis. We drove to the Stuart river EP to "check it out" and the first 100 yards were pretty easy, so I felt my 55 yo kness could handle it. 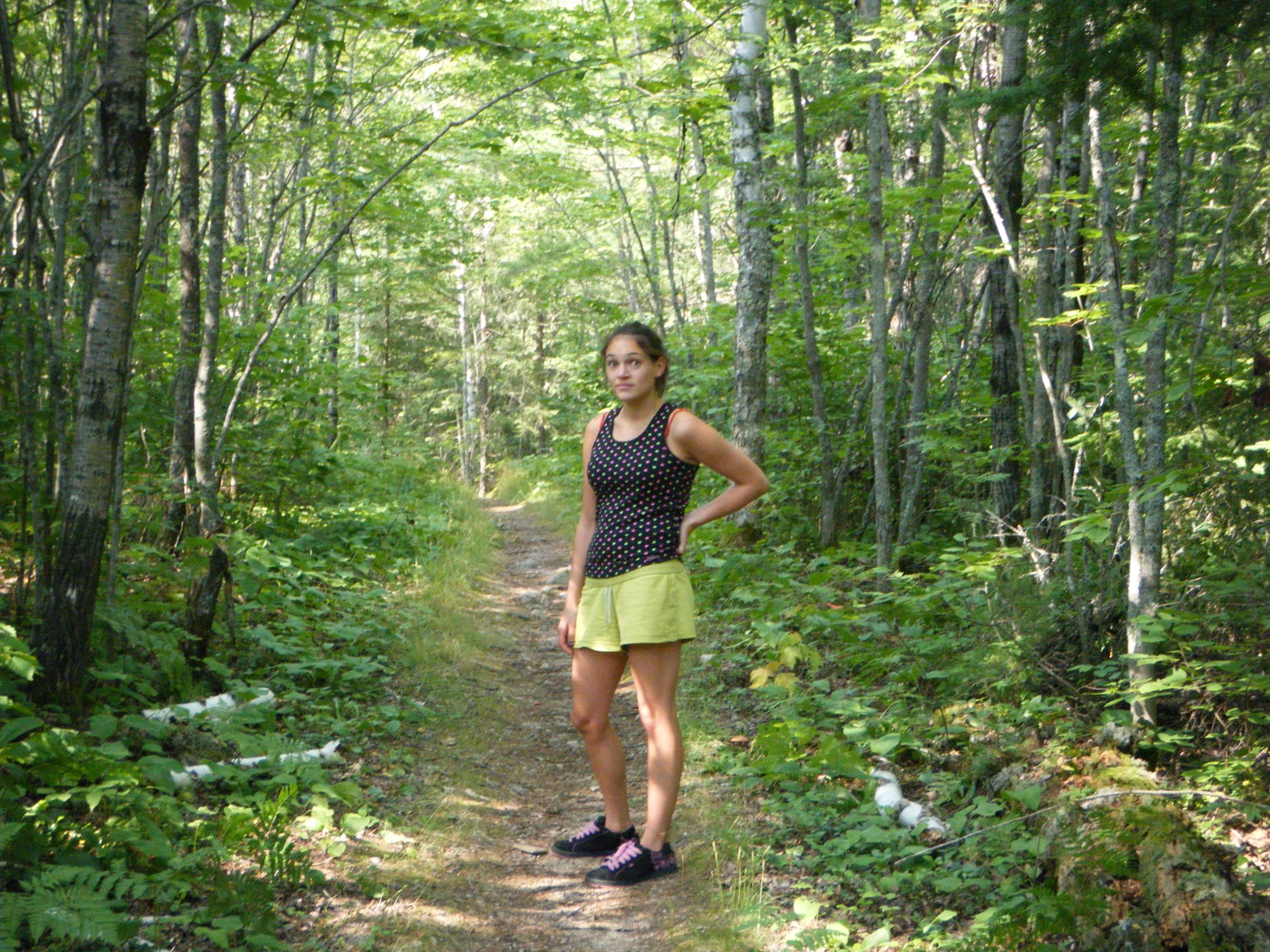 We stayed in a hotel that night after a big steak at the Ely steakhouse. We got to the EP the next morning at about 8 am. It took about 30 seconds for me to conclude that single portaging wasn't going to work unless Tensing Norgay joined our group, so off we went with 1 pack each. The trail is mostly downhill to the river-which I only fully realized going uphill on the way back. It was a gorgeous sunny day, the trail was easy, and we made it to the river with no problems. 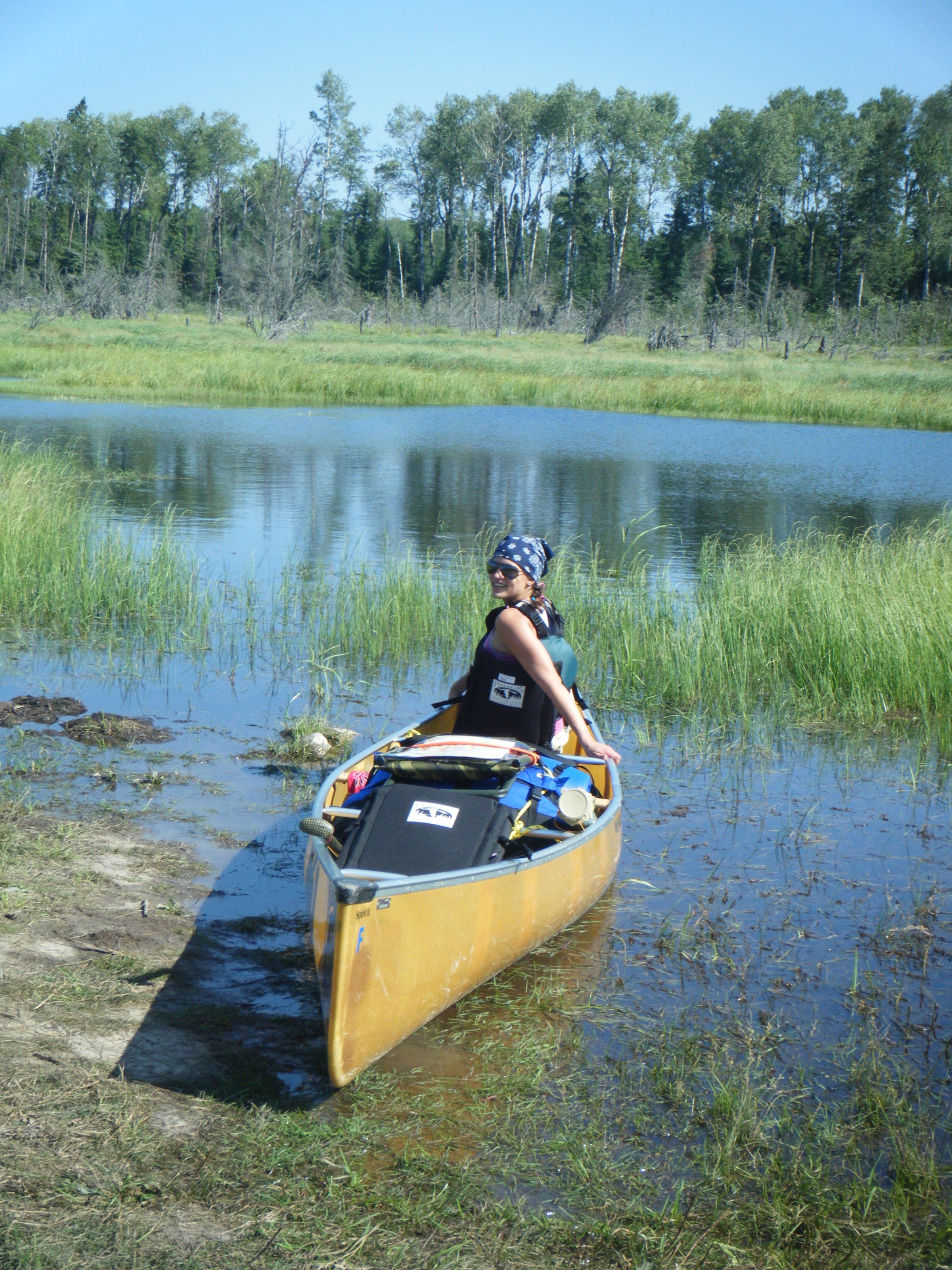 Our initial paddling efforts were somewhat counterproductive. I realized as the stern paddler I was supposed to control our direction. Despite my continuing efforts to perfect my "J stroke" most of our progress downstream was roughly perpendicular to the current, and we wound crashing from one bank to another. I finally concluded it was Katie's fault, so we let the wind and current push us along. We didn't see any moose, the first couple of portages were short and easy. We then came to the first of 2 beaver dams. The guys at Piragis warned us about the propensity of leeches to occupy either the upstream or downstream end of the dams (I couldn't remember which) and they told us you could sink to your waist in the muck if you weren't careful. They were wrong, its only up to your thigh, but we made it over in one muddy piece. 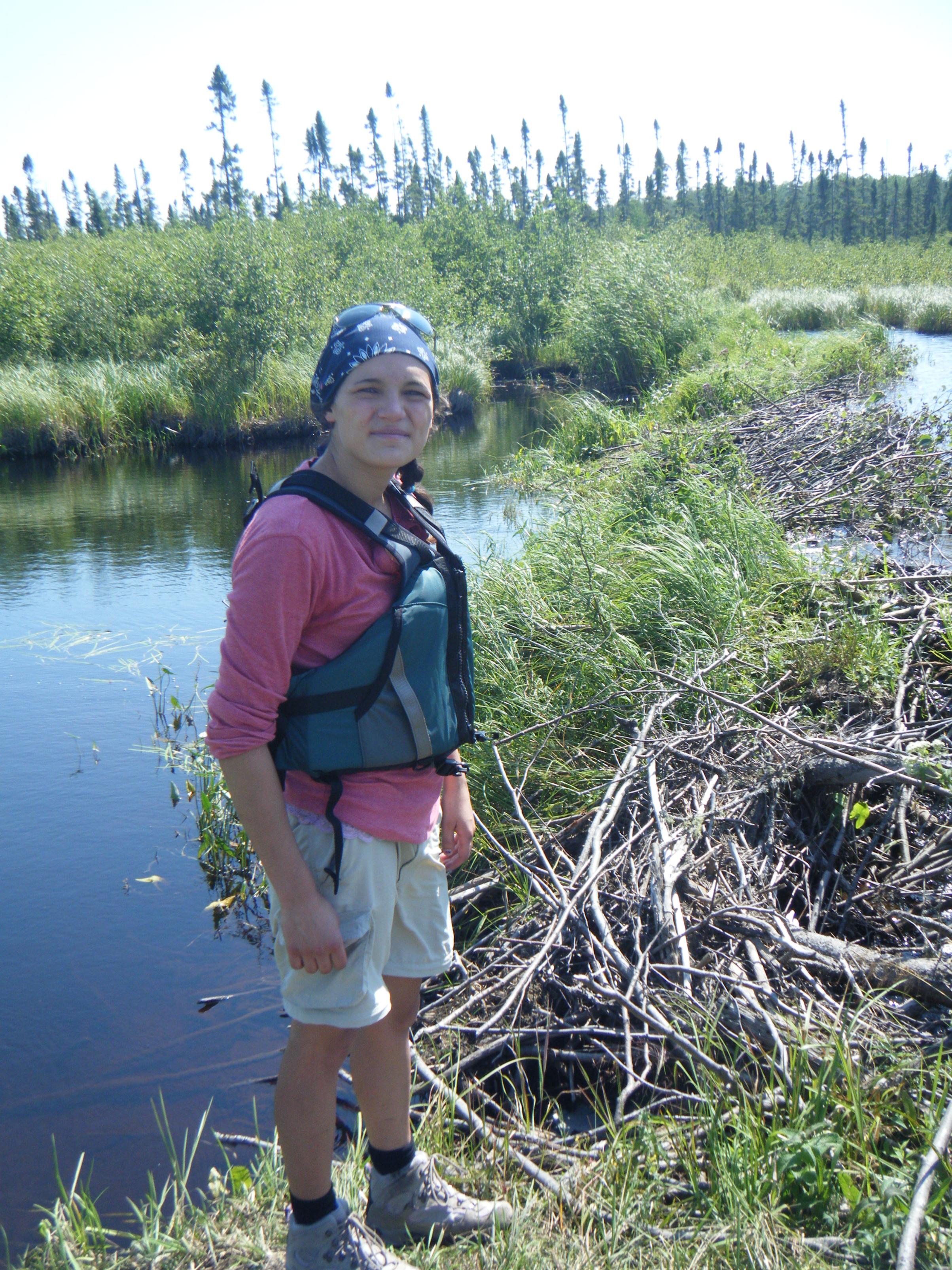 The rest of the paddling was uneventful. We finally made it to the shore of Stuart lake. The falls from the river had moderate flow, we set our sights on the northeast point campsite which was suggested to be the nicest one on the lake. By the time we made it to the campsite, the wind had picked up, and it was pretty choppy. I picked what turned out to be the worst possible spot to land the canoe, and Katie fell off the slippery rock I told her step on. Since she was all wet anyway, I had her manipulate the canoe into position where I could do a dry foot landing. I quickly slipped off my chosen rock into the water, and watched in terror as the wind tried to take our canoe down the lake. We managed to recapture it though and got the canoe on shore. After all that I found I was extremely tired, and thought I would take a short nap. I found that even being very tired, I do not have the capability of actually sleeping on a rock. We got our tent set up, and then importantly, our hammock. I told Katie to eat anything she wanted and wake me up in the morning. If I am good in this life, God will let me take my hammock with me to the next one. 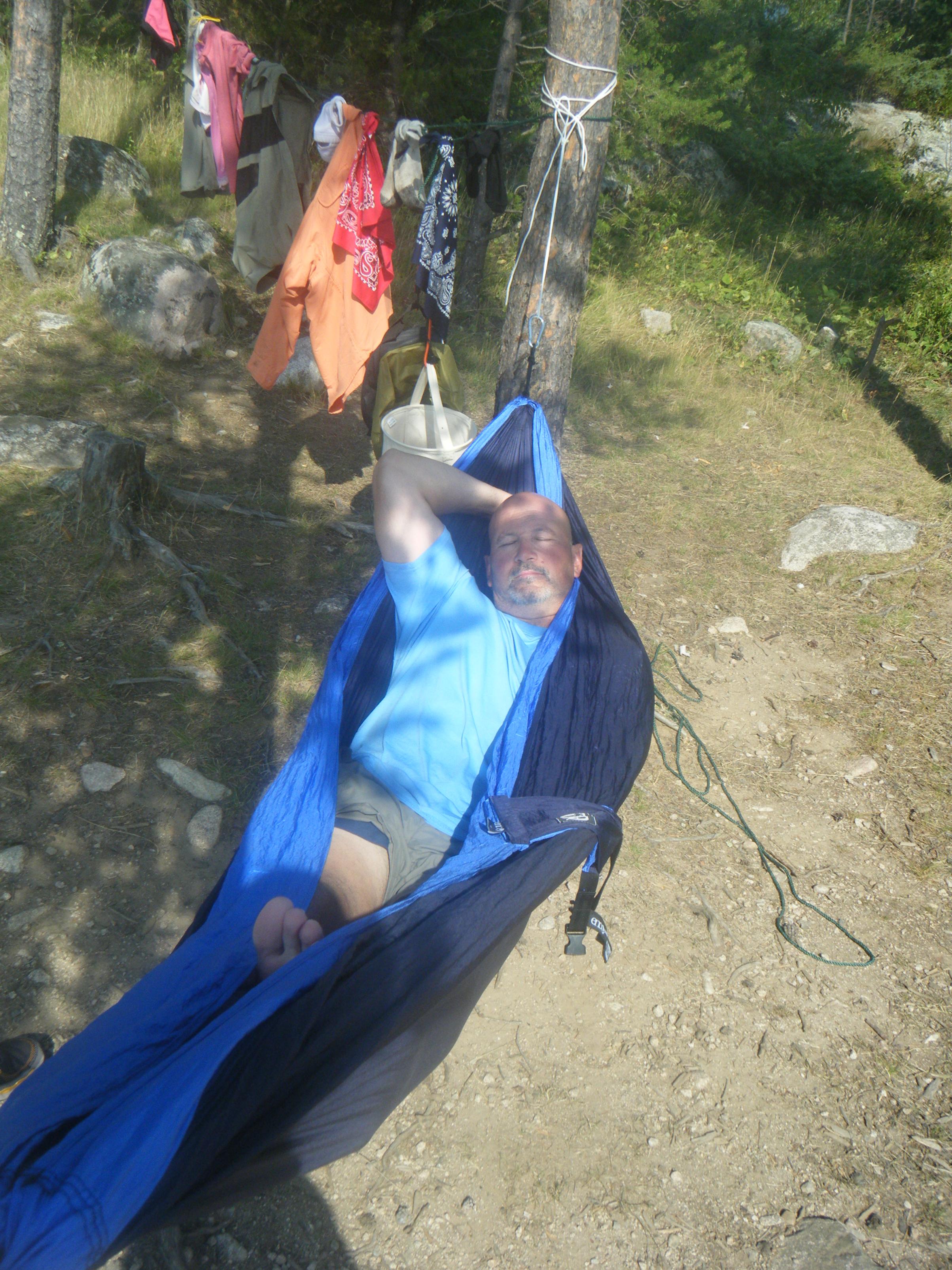 The next morning, we woke to another beautiful sunny day. I made us scrambled eggs with egg beaters (I've had better) and then the best cup of coffee ever. We then went off to fish. I am an avid fisherman, with an array of tackle and a lifetime of experience. Katie is disinterested in fishing at best. That explains why she caught 10 walleyes for everyone I caught, and then a 40 inch pike. It was the strangest fishing experience I ever had-but it was consistent each day out. 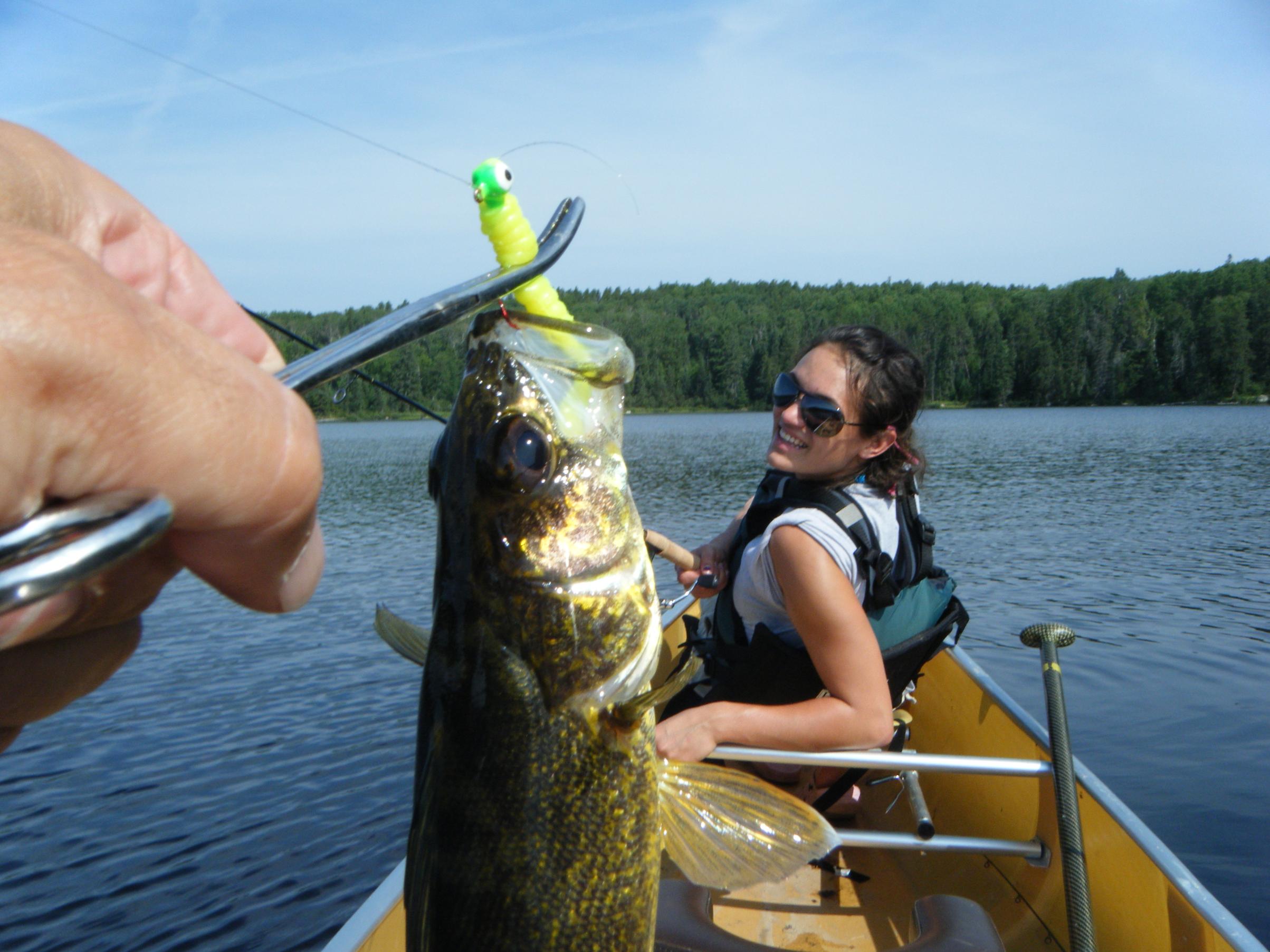 The walleyes were small, but plentiful. I had brought enough oil to fry up walleyes for the entire population of Minnesota so I thought a shore lunch was in order. As the day went on though, the concept of cleaning fish and cooking them seemed too much like work, so we let the fish go and ate some good old fashioned store bought dehydrated chicken something or other yaki. I actually thought it was very tasty (but I think spam tastes good). The next days we enjoyed great weather. It got warm enough to swim and we spent much of the days in the water. 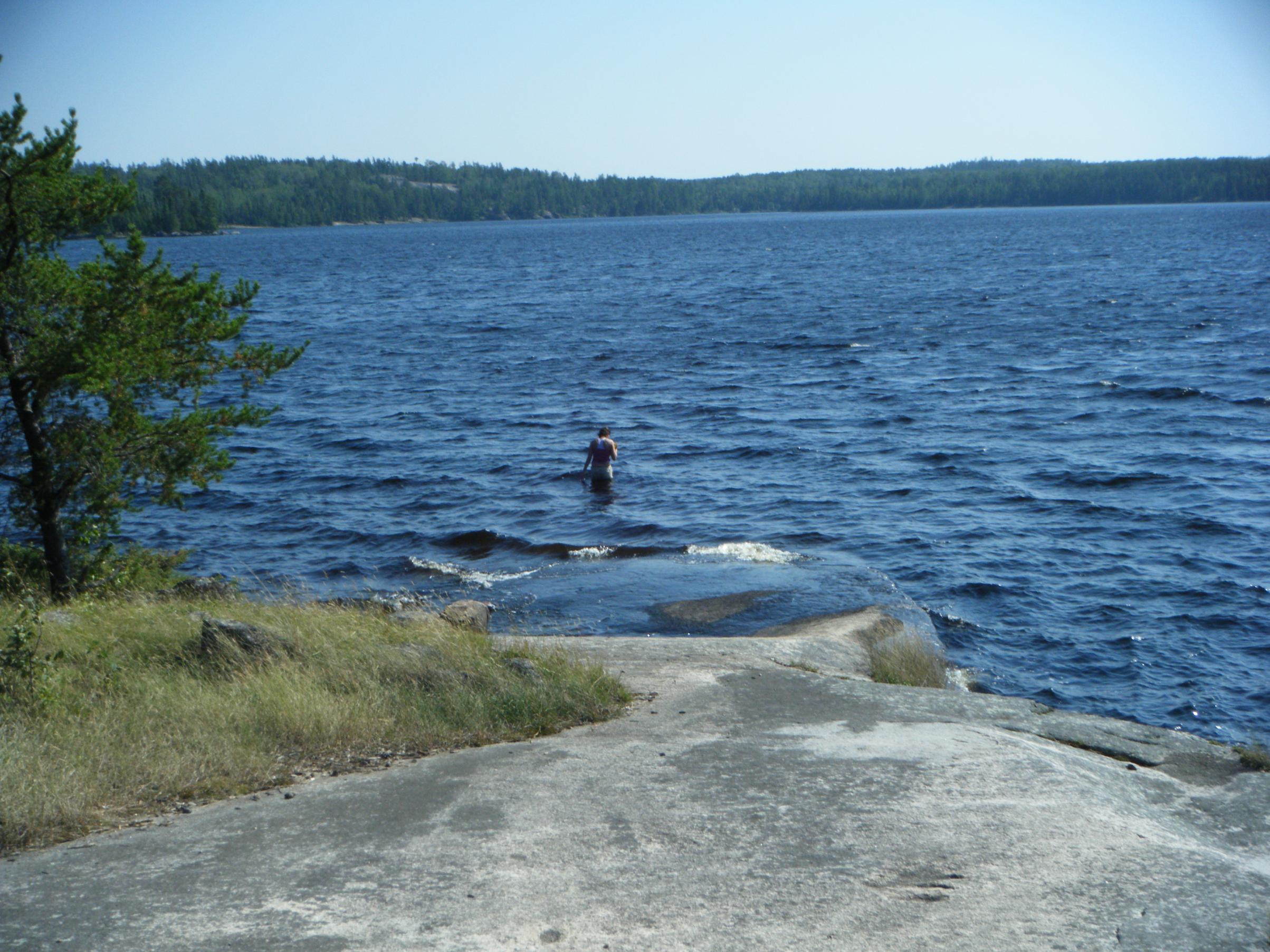 The night before we paddled out, a ominous looking storm came up. A crazy loon yodeling was the only sound on the lake, as continuous lightening lit up the horizon. I put a few more stakes in our tundraline tent. The light show from the lightening as the storm approached was truly awesome, and the wind and rain for a time was torrential. We made it through the night high and dry and in the morning packed up our wet stuff in the overcast windy conditions. 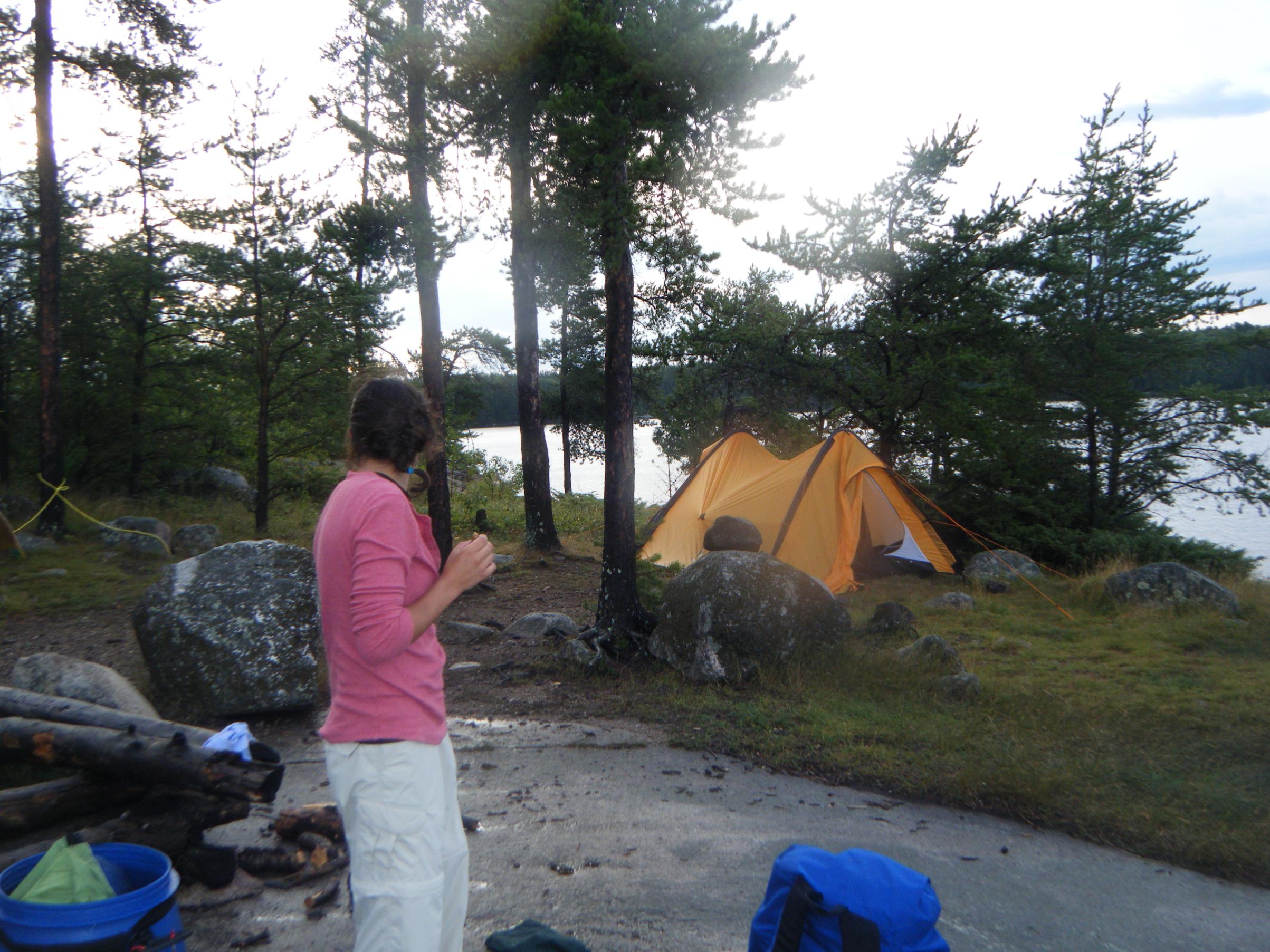 We lucked out again as the skies cleared. The first portage from the lake to the river seemed shorter on the way out than it did on the way in, but I figure my memory isn't as good as it once was. We paddled about 30 minutes up the river, when things really started looking unfamiliar-I didn't actually remember the river ENDING! on the way in. I asked Katie what she thought, and she asked me why we launched in the middle of the portage instead of the end-not thinking to ask me before we paddled 30 minutes. She thought I was taking a shortcut. I quickly whipped out my GPS (which I bought specifically for the trip but didn't use because it didn't float and Katie tended to wobble the canoe) and noted that we were indeed down the wrong creek. We muddled our way back to the portage trail and started over. I told Katie to feel free to notify me if she thought I was on any more "shortcuts." I seemed to be more tired paddling back than I was on the way in, partly because in 4 days we hadn't done much to lighten the contents of my portage pack. By the time we got to the start of the 400+ portage back to the parking lot I was pretty whipped. I lugged the big pack up the trail, which seemed to have gotten much much steeper uphill than it was downhill the way in. I figured there must have been an earthquake that altered the topography in the 4 days we were out. By the time we got to the car, I was calculating how much it would cost us if we just left the canoe at the river and told the guys at Piragis to get it, but Katie insisted she could carry the day pack and the canoe so she jogged and I slogged back to the river. When we got to the river, and I gazed at the canoe that had carried us on our wonderful journey-I found that I now hated it since it couldn't find its own way back to the car. I got it on my shoulders again, and started back up the trail. My daughter she could carry the canoe and the pack, but at that point I still had a little pride. She jogged up ahead and up the trail I went. I think I was going about 5 per hour-steps I mean-and Katie periodically came back to check my pulse. Ultimately, my slow pace frustrated here, so she said she would go back to the car dump her pack and come back for the canoe and me if I was still breathing. She disappeared down the trail. I started a pattern of going 50 feet and resting-but the distance decreased and the resting interval increased until I found I was resting after my rest periods. I made one final heroic effort to make some progress, when I tripped on a stump and launched to canoe into the woods like a scud missile. Fortunately neither the canoe nor me sustained any grievous injuries. I was going to start traveling again, when it occurred to me, if I could fit part of me under the thwarts, I might actually be able to take a nap. Unfortunately, I didn't fit. I tried to think of ways I might shrink the canoe so it could fit into my pocket when my daughter reappeared up the trail. I faked resistance as she hoisted the canoe on her little shoulders and practically ran up the trail. I told her to stop about 50 feet from the car so I could carry it out of the woods (in case anyone was coming the other way). We finally made it to the car, but the last 200 yards I was hoping to hitch a ride. 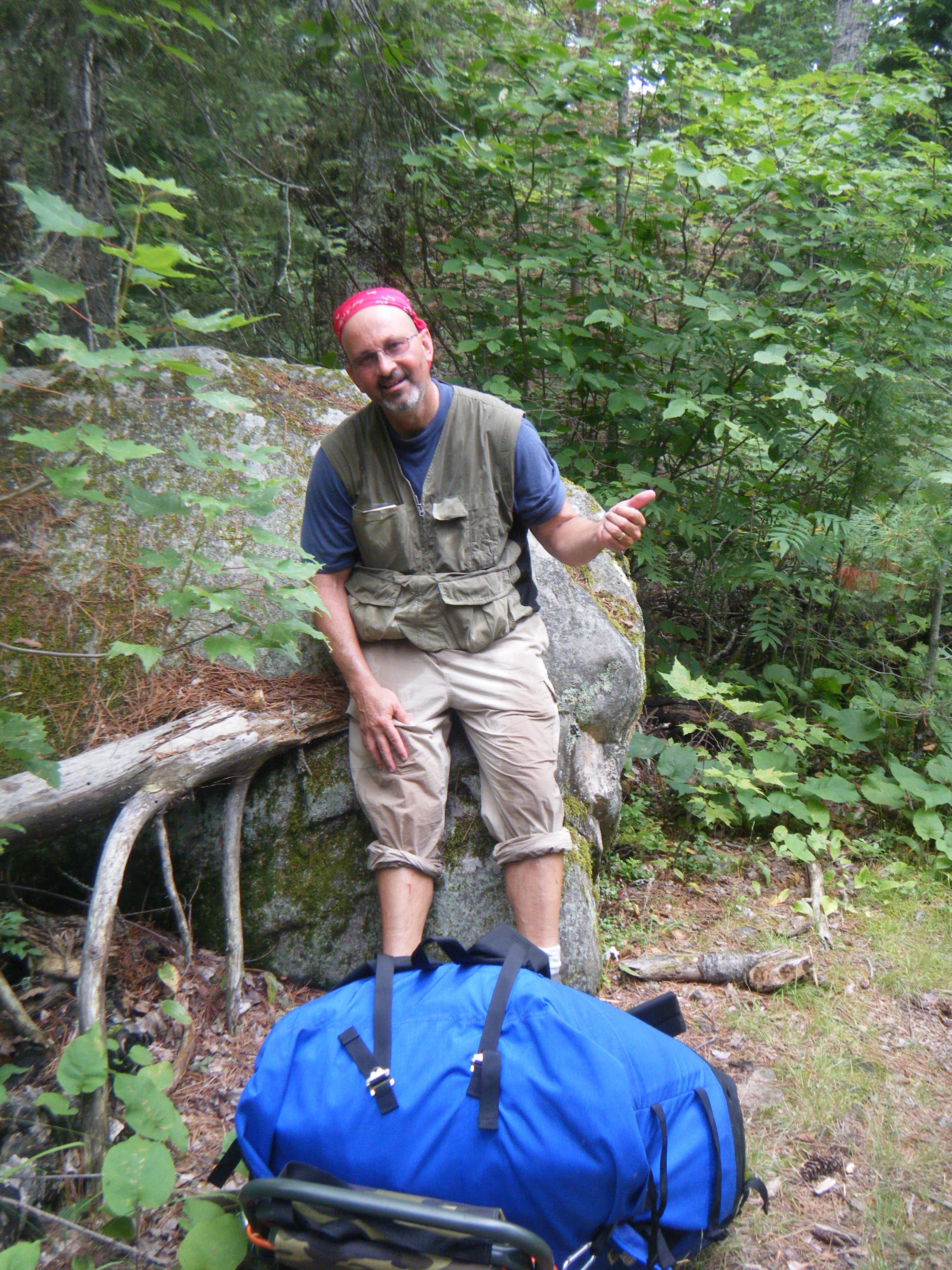 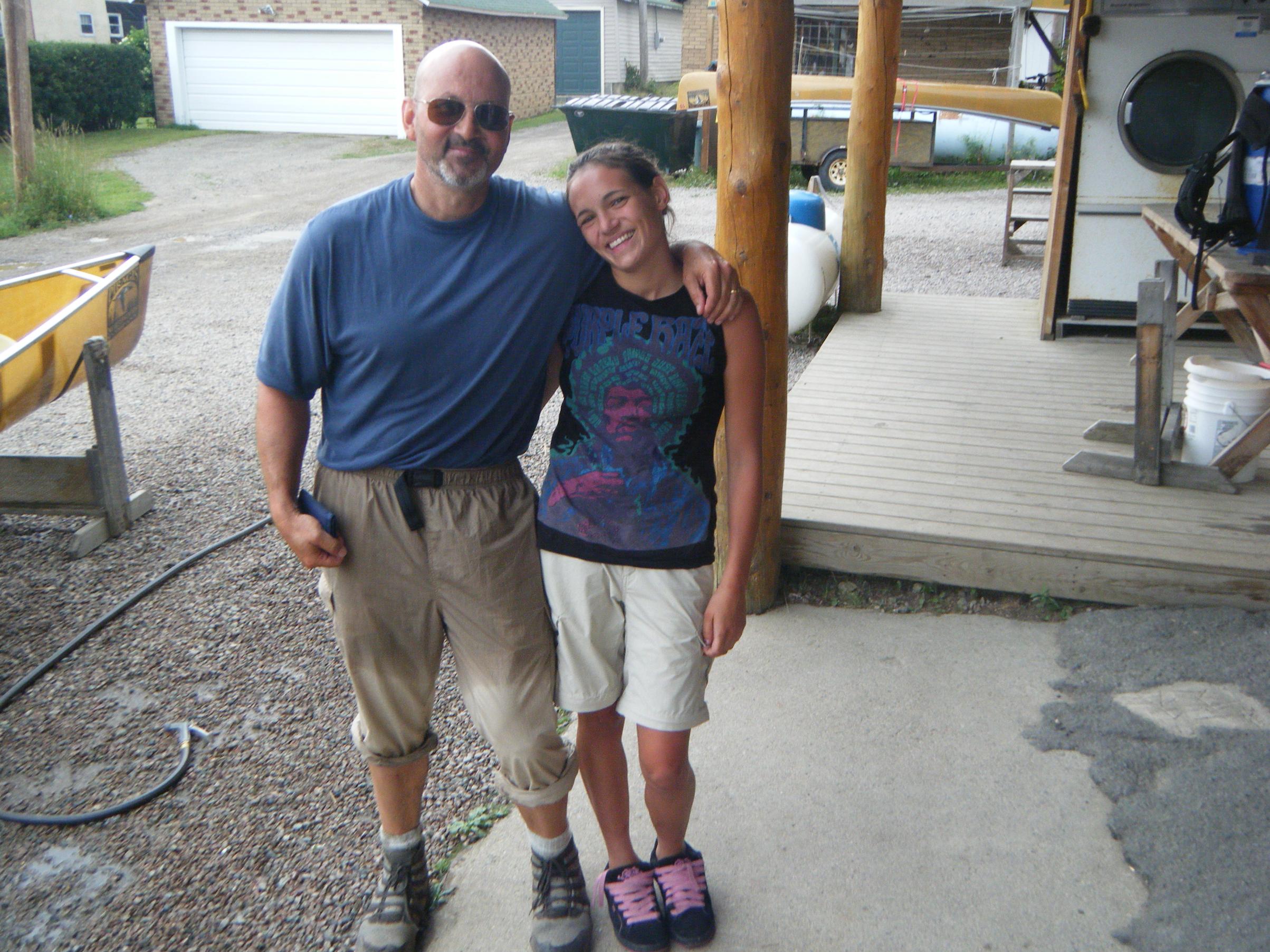 I believe in God and I think he gives us small little slivers of happiness, like a gift, in this life, amidst all the turmoil and stressors we all face, to let us know He's still out there. I think maybe the BWCA is the sort of place where those little reminders are easier to find. I know spending the time up there with my daughter was one of the greatest gifts I have ever received. We will go again and again-but I am going to bring enough kids next time where I don't have to carry anything. See you on the water
Back to Trip Report Main Menu