Trip Type: Paddling Canoe
Entry Date: 07/05/2009
Entry Point: Other
Exit Point: Other
Number of Days: 8
Group Size: 1
Discuss Trip: View Discussion Thread (6 messages)
Day 2 of 8
Monday, July 06, 2009 I woke July 6th prior to the alarm sounding and excited for the trip ahead. Breakfast was made and coffee was boiled. I finished packing the food pack (usually my daypack: a Osprey Atmos 40) and my other pack (a Gregory Baltoro.) I wasn't planning on multiple portages, nor was I planning on going light. But I didn't want loose items about the canoe. Food consisted of 8 days, split into 1gal. Ziploc baggies (1 for each day.) The total amount of food I had packed for only me still amazed me. In a small Igloo cooler I had some goodies packed up for dinner the next three days. Total weight was about 100 pounds and included a folding full-size lounging chair, a hammock, rainfly, and my beloved 10” cast-iron skillet. How in heaven can you make proper bacon and eggs for breakfast in anything but!?!? I did, however go with the one spork, one plate, one cup methodology of weight-saving measures. After everything was properly assembled in the bed of my truck I shoved off, bound for Sylvania Outfitters. I of course arrived 30 minutes early, but the owner, Bob Zelinski, (Sylvania Outfitters) showed up shortly thereafter and opened early. Kudos to him!

He outfitted me with my reserved 17ft Souris River Quetico and kindly gave me two paddles as I had forgotten mine at home (can you believe??) then helped me with the canoe onto my truck's racks. I then shoved off for the ranger station to get my permits and finalize my campsites. I nearly got to the ranger station and realized I hadn't called home to give the “all clear” and had to return nearly all the way back to Watersmeet. That delayed me a bit.

I arrived at the Crooked Lake put-in and was somewhat dismayed to see a cement ramp and some boats and trailers. I knew motorboats were allowed on Crooked Lake and respected that. After all, it's the U.P. and things are done the way they are done up here. Questions aren't asked. But, I was surprised to see the level of boating traffic that was present. I made quick work of unloading the canoe and my gear and parked my truck in the lot a few hundred yards up. My camera gear was secured to the stern thwart in front of me, safely in a dry-bag. I packed the canoe front-heavy since I was paddling solo and was content on the trim. That thought would change in just a few minutes.

I shoved off at about 10am into a beautiful day in the “wilderness” and was a bit concerned about the whistling going on up in the tops of the White Pine trees. I could tell it was quite windy despite the semi-protected bay I had entered and found puffy cumulus clouds whizzing by. I'd read that Crooked Lake was a very fertile lake and was not surprised at the reddish hue so typical of lakes in this area.

I easily paddled down to the first big bay of Crooked Lake. I enjoyed the canoes lines and apparent stability and found it fascinating to watch the waterline through the kevlar hull. Entering the first big water of Crooked confirmed my fear of there being a good wind about. It was NNW wind at a steady 15 with some good prolonged gusts I estimated at 20. I was intent on quartering the wind and making an island for a little break. The wind changed that and I spent my time learning to handle this light-as-a-feather canoe. Waves were not an issue due to the relatively small water I was on. Serious gusts forced the canoe to cast bow-first away from the wind. I would calmly back-paddle so I didn't lose too much ground until the gust eased. Then I'd furiously paddle until it happened again. This took about a half-hour worth of time but I made it without much further issue. On retrospect I should have filled my 5-gallon portable shower and put that into the stern.

The next bit of paddling went by without issue and I had the wind at my back most of the time. I delighted in seeing such huge trees and abundance of wildlife. Bald Eagles were frequent and this area has a special feel all it's own. Little did I know the best (and not so best) was yet to come on this trip.

I crossed a wide expanse with the wind at my back in no time at all. It was a joy to play in the waves and get used to this canoe. It is a far cry from my 80# square-stern Grumman and it's ox-like behavior.

The last section prior to my campsite had a serious cross-wind to it. The wind had picked up even more and a small peninsula was not enough to break it up enough for it to not be a major problem for me. It took some time, some back- paddling and a few tries to get across a stretch of water that on other days I glided past in just a minute or two. I made it however, and in no time found my campsite, Fox-2. It was up a bit of an incline and set back from the water quite a bit. The landing was shared between Fox-1 and Fox-2. It was a mucky landing and not much good can be said about it. I chose to unload there though. The gear was humped to the campsite and I made quick work of setting up camp and enjoyed the brilliance of the sun dancing across the lake in the wind.

I had some lunch and waited the high wind out by gathering firewood and exploring some. It was a nice point with pine duff on the forest floor as far as you cared to dig. I found the perfect spot for a hammock and decided I would try my hand at starting a fire without matches to occupy myself. It took a bit, but I got a tinder bundle going with flint and steel. Next I tried a bow-drill and failed miserably. I vowed to get some lessons from a friend wise in the ways of the American Indian of the Potawatomi tribe and “Keepers of the Fire.” I got the bear tree set up and ready for the pull up that night. Food pack was heavy and I had to D-ring the Igloo onto the pack as well. The hemlock I put it into groaned under the weight and I wondered if a curious bear went out on the limb...would the branch give way and he get all my food?

The wind indeed eased up just prior to dusk and I jumped back into the canoe and quickly filled my 5 gallon portable shower/bladder for camp water and as a way to trim the canoe. Then I spent my time videoing the reflections occurring in the protected bay. I footed the massive 13-rod portage to Mountain Lake just to take a look-see and was quickly chased back to my boat by swarms of mosquito's. I also took some birch bark off a fallen(and rotted) white birch. That was quickly stowed for what I deem “emergencies.”

Nightfall found a glorious fire with a baked potato, some corn and a garlic- stuffed ribeye done to perfection (medium-rare.) I made quick work of chores and sat by the fire listening to the loons and sipping on some green-label Jack D. 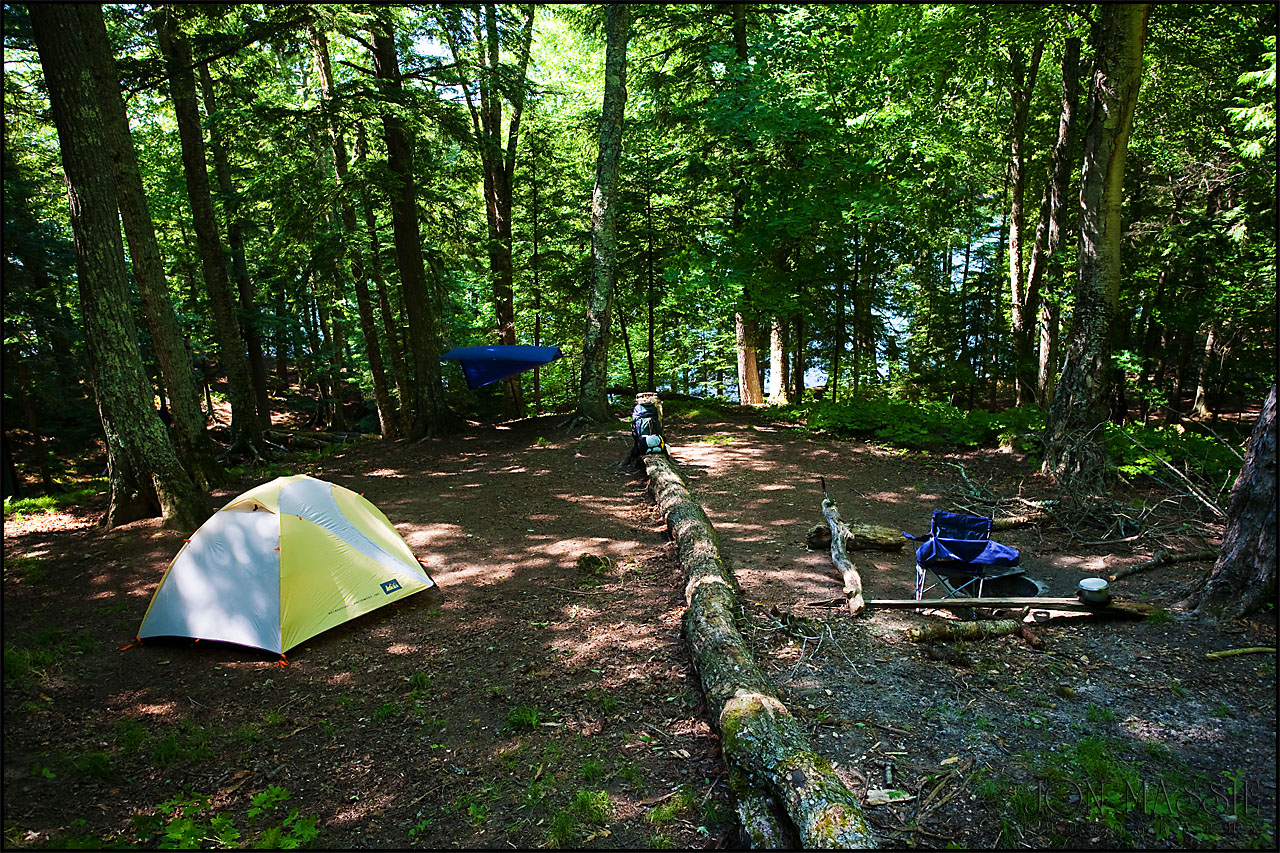