Wind, Waves, and Fishing
by youngGuns

Trip Type: Paddling Canoe
Entry Date: 08/23/2008
Entry & Exit Point: Hog Creek (EP 36)
Number of Days: 3
Group Size: 4
Trip Introduction:
We are a group of college students from the Duluth Area and decided that we would sneak a trip in before school started back up. We left home at about 5 a.m. headed for the Tofte Ranger station to pick up our permit.
Discuss Trip: View Discussion Thread (2 messages)
Day 1 of 3
Saturday, August 23, 2008

We arrived in the parking lot for Hog Creek about 9:00 a.m. and unloaded all of our gear. This was our first trip into EP 36 and the stairs down to the river were a welcomed surprise. With everything loaded in the canoes we were ready to go. There was a group in front of us and we waited around for about 15 minutes to let them get ahead to avoid any congestion. After paddling for 10 minutes we caught up to them and they were portaging around a small set of rapids. Being the young, and smart people that we are we decided to try and push through.  There was what appeared to be a short patch of rocks and rough water....until we got passed the first set and realized the creek hooked hard to the right and there was another 100 yards of the same rough terrain that we had just been through.....We decided to portage. After learning a bit of a lesson the rest of the paddle on Hog Creek went rather smoothly.

We broke out into Perent Lake after about 2 and a half hours of paddling and found ourselves in some pretty big waves. Our map gave us a rough idea of where mostof the campsites on the lake were so after seeing that all of the visible sights from the entrance were full we decided to head north, hugging the shore.  After what seemed like hours of paddling on the lake in giant waves we were able to find a site. I understood quickly why it was open. The wind was blasting the campsite, but for now it was a welcomed relief. We found a few places to hide the tents behind some trees and set up camp. Excited to get our lines wet we headed out shortly thereafter to find out what the fishing situation would be like.

My two buddies had brought along a portable fish finder and were headed for deeper water. I however was with my girlfriend and she had very little interest in paddling and was all about the fishing. I told them that since I was paddling solo that I was going to head for an island where we could get away from the breeze a little. We brought 10 nice size eaters back, they brought 1. We were never more than a couple hundred yards from camp and it was an amazing experience.

After having fresh walleye for dinner, it was a relatively short evening with a little fire side relaxing and a couple of barley pops we were headed to bed. 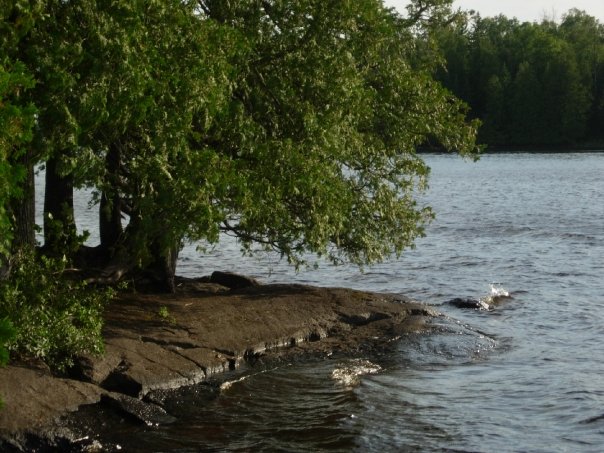 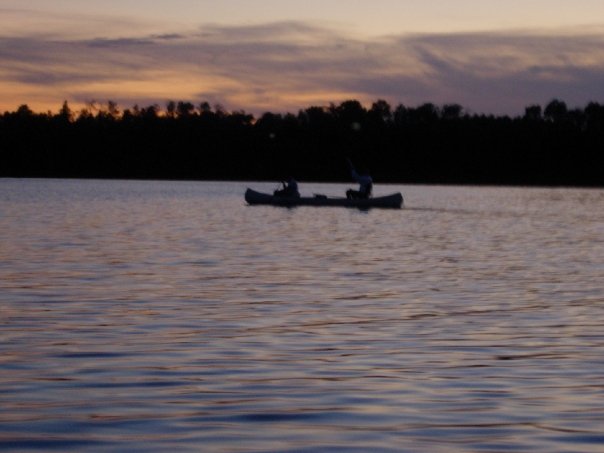