Trip Type: Paddling Canoe
Entry Date: 06/14/2009
Entry & Exit Point: Little Indian Sioux River (north) (EP 14)
Number of Days: 6
Group Size: 2
Trip Introduction:
Our trip began like I assume many others do; about a year and a half before the canoe met the water. A comment such as "How about we try the Boundary Waters?", followed by a "Yeah, we should do that sometime" was enough to get my mind working, and as the days passed the desire to make it happen for real became more and more entrenched in my mind. I went to the library and got the books they had; the East and West pair, and another one about the whole area. My daughter helped me pour through these researching different lakes and possible routes. Actually her input consisted of pulling the map out of my hand, or trying to wrinkle the pages since she was less than a year old at this point. During idle time at work I would make and edit gear and fishing tackle and menu and clothing lists. All this a year and a half to a year and 3 months before our proposed entry date! My interest went into hibernation eventually until the following January when my brother and I went to a fishing show, talked to an outfitter at Voyageur North and booked our trip. It was finally official! My interest re-ignited I spent the following 5 months making and re-making my lists of gear and I ordered and read the Michael Furtman book on fishing and spent countless hours on this BWCA website endlessly dreaming of my upcoming trip! On the drive up from Chicago I learn that my brother has spent zero time thinking of it due to his hectic job and family life. One Sunday before the trip he hauled all his camping gear out of storage and threw it on the basement floor. The last Sunday before leaving he took a giant duffel bag and a humongous duffel bag and put in everything he thought might be useful. We each prepare in our own way I guess! ha, ha... Saturday morning he shows up at my house, and then we are on our way to Ely!!
Discuss Trip: View Discussion Thread (4 messages)
Day 1 of 6
Sunday, June 14, 2009 On Saturday evening we get to Voyageur North and the lady at the counter couldn't have been nicer. We get everything squared away and arrange for our canoe to be dropped of at entry point #14, LIS river north the following day. We also have a detailed conversation with her about paddles, and decide on two plastic ones for paddling, and a spare wooden one we can use for cleaning fish. I mention this because it comes back to haunt us the next morning. We then go to the bunkhouse and discover that it is communal living: three bedrooms sharing one bathroom. I guess this is fine if you are a college student thumbing your way across the youth hostels of Europe, but for two middle aged guys we would have happily paid another $10 to $15 for a private bathroom. So the first thing we do is go out and reserve a room at Adventure Inn to stay at after we come out at the end of our trip. The mosqitos in the parking lot are pretty persistent; a sign of things to come? We return to the bunkhouse to get some sleep and discover that they have apparently rented out the floor above us for use as a children's wooden shoe square dance studio. Or perhaps they are herding cattle, it's hard to say which.

The next morning we are up bright and early and get breakfast at the only place which seems to be open in all of Ely. Then we go back to V.N. to pick up our bait before heading off for the 1-1/2 hour drive to the trailhead. Leeches no problem, but bad news on the nightcrawlers. Refrigerator had froze up and they were all dead so we get ready to head across the street to pick up some elsewhere. As I'm heading out the guy says that the ones from the middle of the fridge were still alive and we could have them, he even throws in an extra box for free. Nice guy. Now we are officially off!!!!!

The day just couldn't be nicer. I had worried about cold or rain or wind or all of the above but the weather was just beautiful and we had a great drive out to the put in, getting more and more excited as we drove. We unload the car, see our canoe waiting for us as promised, and carry our first load down to the river. When we get back to the parking lot for another load my brother asks where are the paddles and life jackets? I don't think too much of it at first, but as we turn the canoe right side up and don't see them underneath or anywhere nearby growing disbelief turns to panic! Of course there is no cell phone signal, so we have no choice but to drive back to town till we get one. Well, by the time I have a signal we are back in town anyway so we go back to V.N. in person only to discover that they don't drop off paddles or life jackets due to fear of theft. Okay, many of you are probably thinking "Everyone knows that", or "What a pair of greenhorns". But why would the lady initiate a detailed conversation about paddles the previous day if it wasn't to find out what we wanted so they could drop it off?! And the guy who gave us our bait in the morning; he couldn't have casually asked "So, you have everything you need? Don't forget your life jackets" Or something like that. Anyway, although we are both pretty pissed off, me more than my brother, there is nothing we can do. The day is still beautiful when we finally make it back to Little Indian Sioux, only it's three hours later in the day than it would have been. And now instead of the leisurely paddle with the occasional cast that I was anticipating it has turned into a "We better hurry if we hope to get a decent campsite". We are basecamping so we want to find a good one we can keep all week.

But the paddling is a delight, and the weather is beyond perfect. We enjoy the slow river paddle and are pretty impressed by the long beaver damn we pass at one point that stretches all the way across the river, except where it has been broken through on one end to allow canoe passage. The portages are not too bad, especially since we triple portage. My brother his giant duffel bag on one trip, and his monster sized duffel bag on the second trip. Me my backpacking backpack and misc handfuls of gear on trip one, and food bag and misc articles on trip two. The third trip we alternate carrying the canoe and paddles. Not the speediest travellers, but hey, we're on vacation! :-) 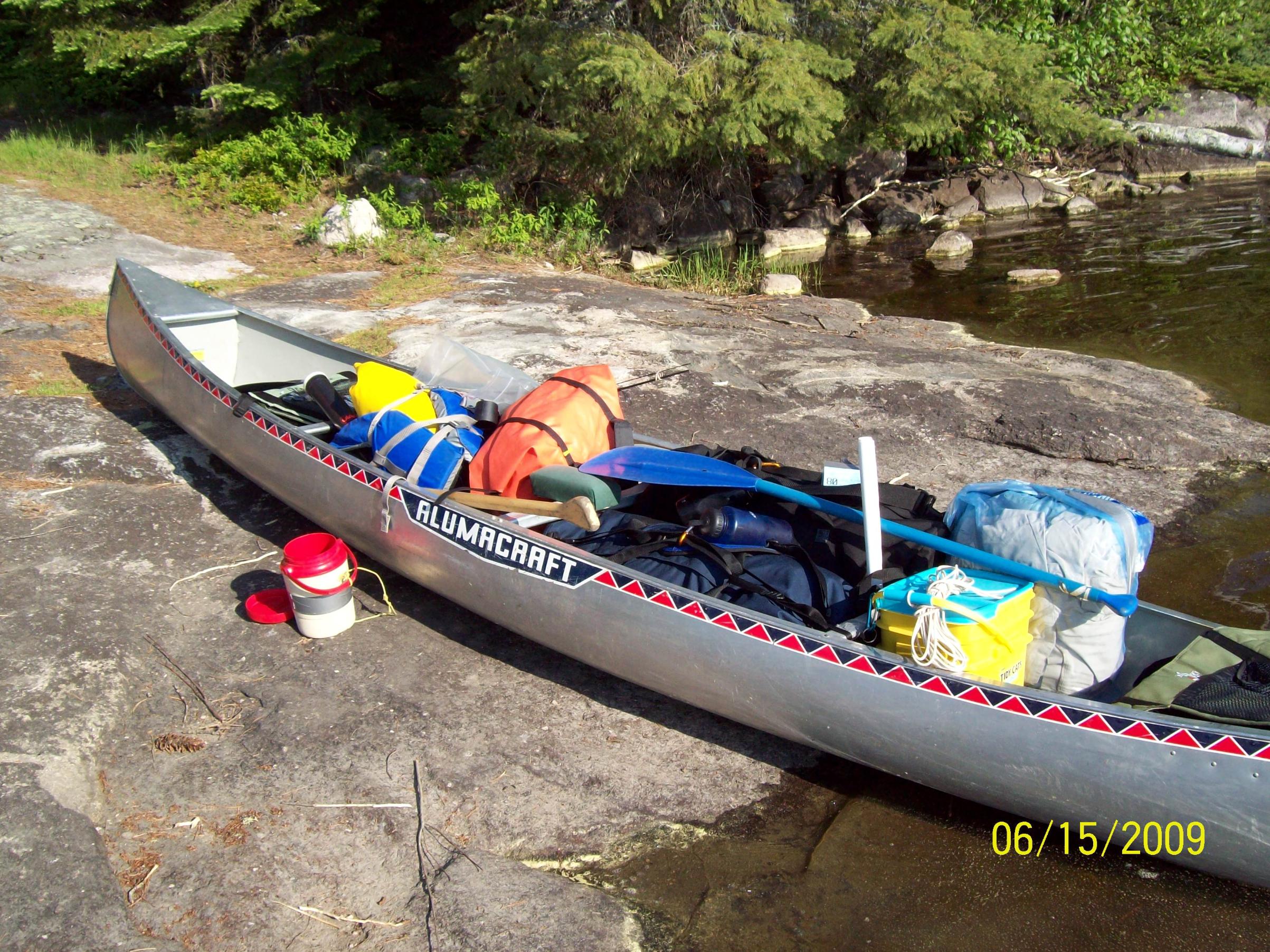 At the portage between the Pauness lakes we see a mid sized cooler sitting in the middle of the landing, but no one is in sight. We carry our gear across on trip one, and notice that there is no one on the other side of the portage either, and no one in sight on the lake. We go back to the beggining for load two and it's still deserted, so I take a peek inside. It's full of food, so obviously it wasn't abandoned on purpose. We don't know who it might belong to so we leave it there. After we travel across the other pauness lake (upper or lower I don't remember which was which) we come to the loooonnnnggg portage to Shell. While on this portage we meet an older man and a teenager. At first I think it's a grandpa and grandson, then I realize that when my newborn son is a teenager I will be 60, so I guess it was probably a father and son. :-) To get their cooler back they not only had to hike back across the portage between the Pauness lakes, they had to paddle across lower pauness, and carry their canoe back across the lengthy portage to Shell lake!! In their shoes I would have been plenty frustrated!!!! I was impressed though by their demeanor: there was not one sign of blame or anger between them. I would have expected one of them to at least give a little eye roll while pointing to the other, or a finger twirled in a circle by their head to indicate the other one was senile or forgetful. But nothing of the sort. I was moved at the mature uncomplaining way they handled a potentially frustrating situation. I bet they had a very enjoyable week together.

The portage between Pauness and Shell is a long one, 2/3 of a mile, but we are finally on Shell lake. Based on my research we were hoping for one of the sites on the northern island in Shell, but as we pass by we see that it is taken. We wind around to check out the bottom site and it is open so we grab it. But we quickly realize I was mistaken: we have the less desirable middle site, not the highly rated northern or southern site. But since we have seen other paddlers on the lake with gear filled canoes still searching, we realize beggars can't be choosers and we better stay put and be glad we have a home for the night. I hope the man and his son found a good site before dark.

We set up camp, and start a fire to cook our italian sausage for dinner. Then I just have to get some casts in! Soon I get the first fish of the trip; no lunker but at least now we know there are some in here and they can be caught. 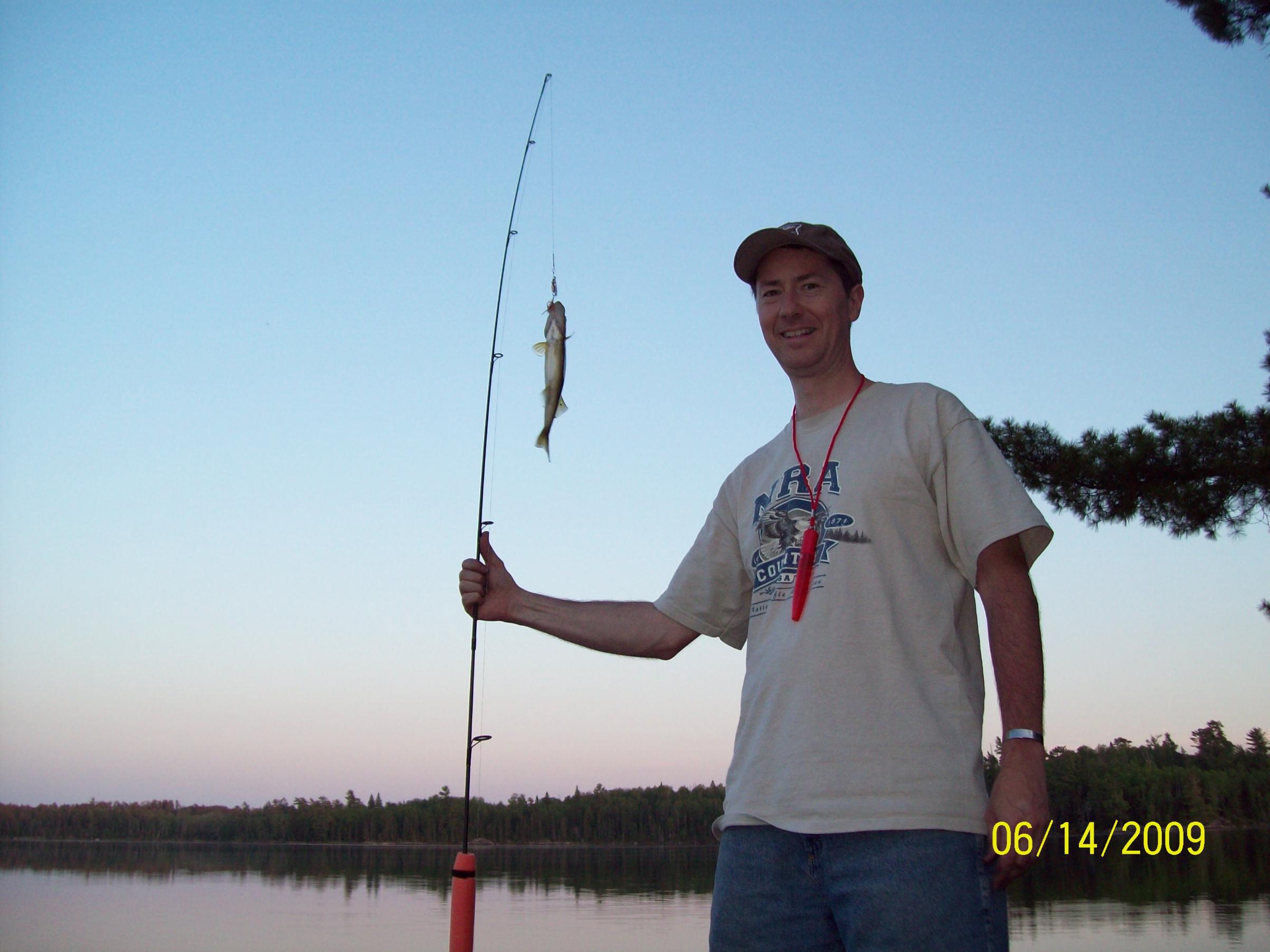 Dinner is delicious, the weather is still great, and soon we retire.