Trip Type: Paddling Canoe
Entry Date: 05/29/2010
Entry Point: Saganaga Lake (EP 55)
Exit Point: Seagull Lake (EP 54)
Number of Days: 10
Group Size: 2
Discuss Trip: View Discussion Thread (32 messages)
Day 2 of 10
Saturday, May 29, 2010 Breakfast was at 7. French toast with powdered sugar chopped strawberries & bananas. Shortly there after we got ahold of Andy & made final arrangements for our tow across Saganaga. The tow was fairly uneventful. Beautiful scenery, but I was chompin' at the bit to get in The Black Pearl. As we crossed we were told that we'd be doing a "wet drop". Which meant, he would anchor the boat out from shore. Then put the canoe in the water & proceed to load it then hop in and go. While she never said as much, Vickie admitted later that she was horrified at the prospect of "jumping" from one boat to the other. She had no problems, we paddled around the point to a very nice campsite & pulled in to reorganize. The first thing we did was shed a few layers as it was warming up quickly. 90 degrees was the predicted high. After some minor exploration of the campsite we were officially off.
As with my trip out of Sawbill a few weeks earlier, a bald eagle was seen perched atop a tree. Many loons and various waterfowl were also encountered intermitantly as we paddled along. Vickie was fascinated with how close th loons would allow us to get. She dug her camera out and attempted to get a picture or two. Everytime she got one into focus, they would dive just before she could snap the picture. This happened more times than I cared to count. It became a running joke for the first few days of our trip, as she tried in vain to capture a decent shot. 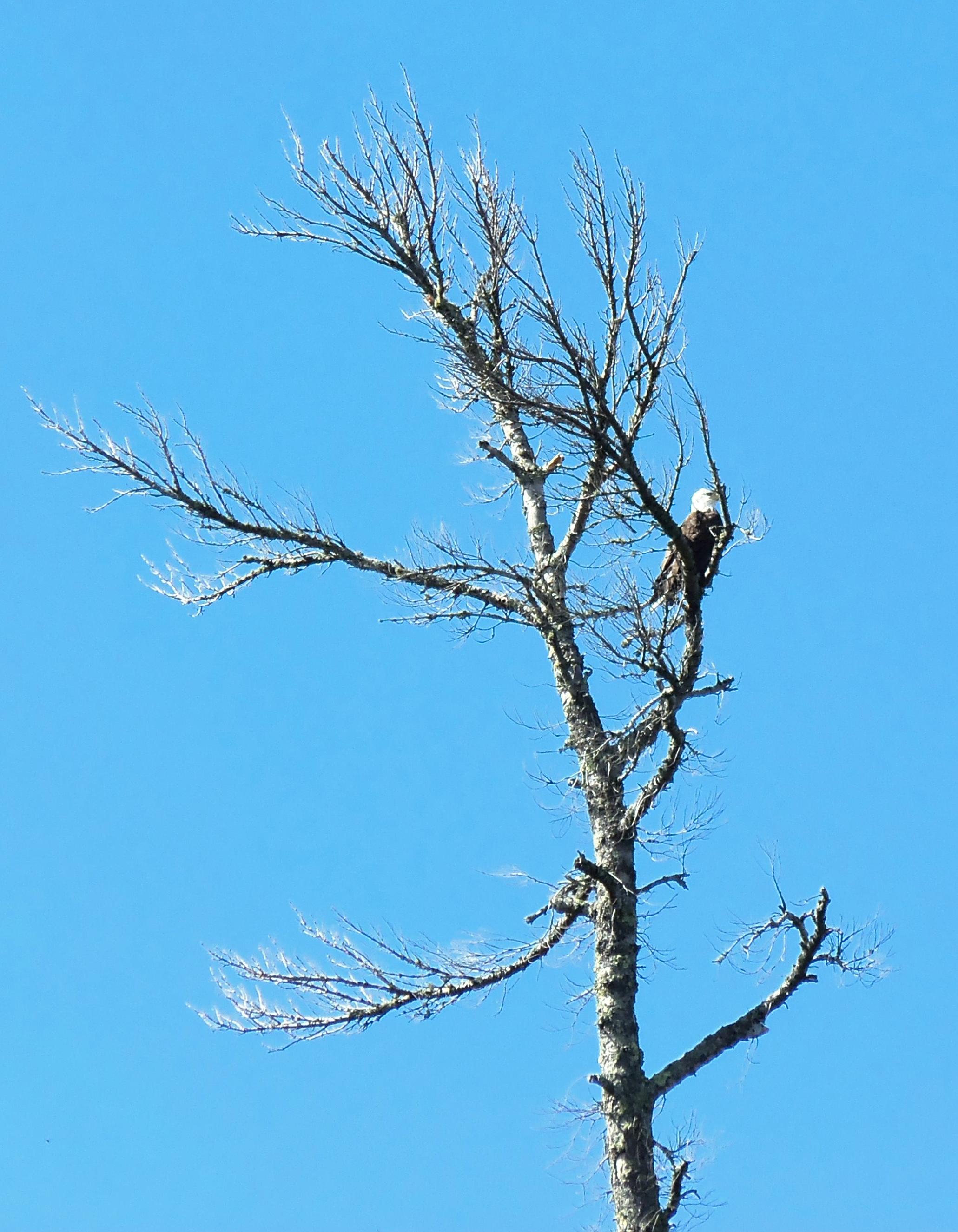 Going in, my main concern on Saganaga was wind. No worries there, as this day was turning out to be a beauty. Very warm and sunny with just enough breeze to keep one cool but not so much as to be a hindrance on paddling. Paddling west across Saganaga some of the spots in the narrows were veryt shallow. Several groups passed us by on their way out. After some minor navigational confusion we came to Swamp portage which was bustling with a group of 9 coming across. 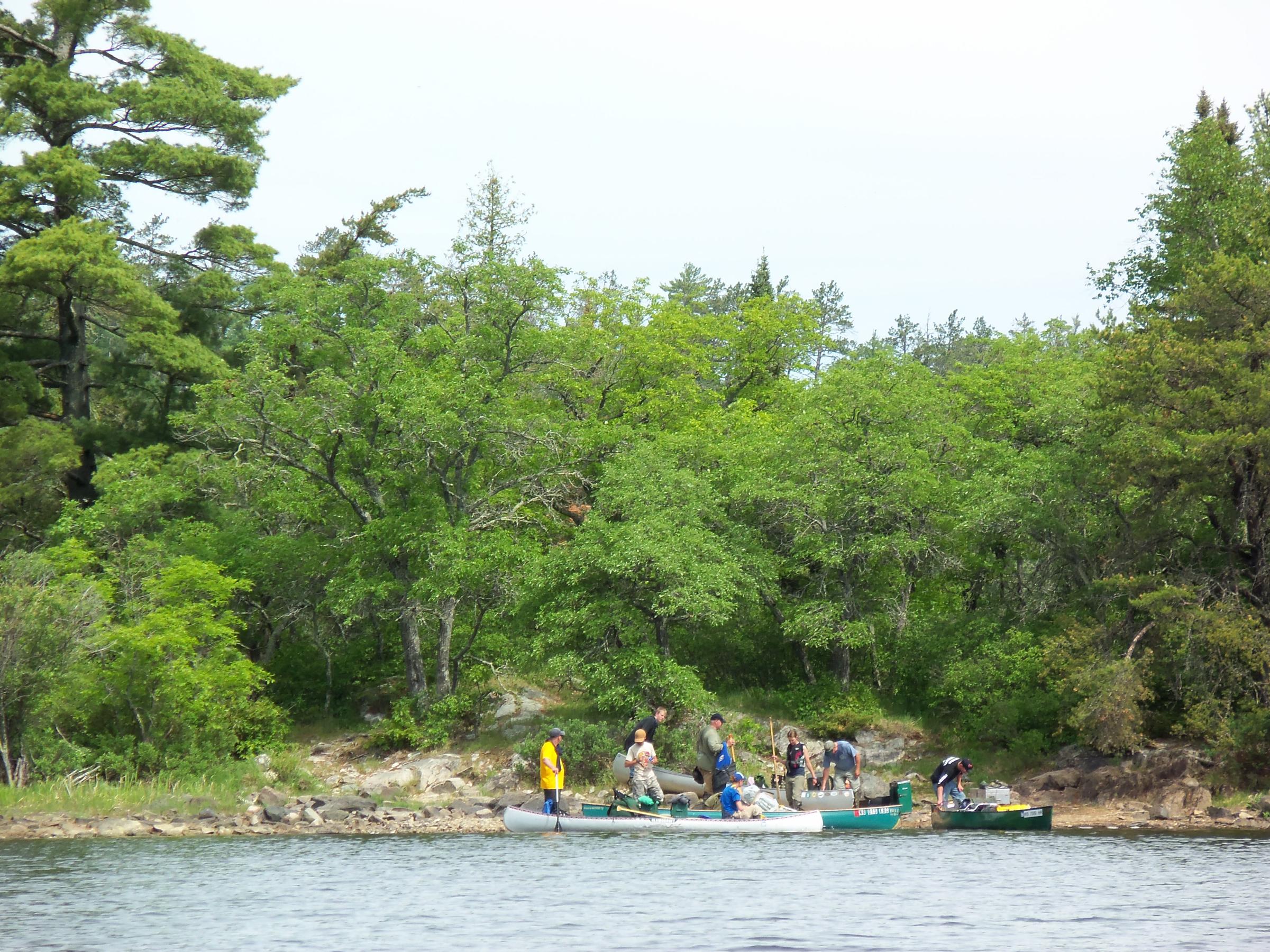 It was short but very rocky.
Making short work of Swamp lake we came to Monument portage, Vickies' first real test of the day. I told Vicky to just take it easy, & go at her own pace. There was a fairly large aspen across the trail, but it wasn't too much trouble to step right over it. We met a very friendly group of 6 along the trail. So much so that we needn't have gone back for the rest of our packs/gear. We chatted awhile about our route & they strongly recommended going to Lake of the Clouds. Even though my Voyageur map didn't show any fish, they insisted we bring our poles along....we wouldn't be disappointed. We thanked them for the advice and for hauling our packs across the trail then went back to take a few pictures. 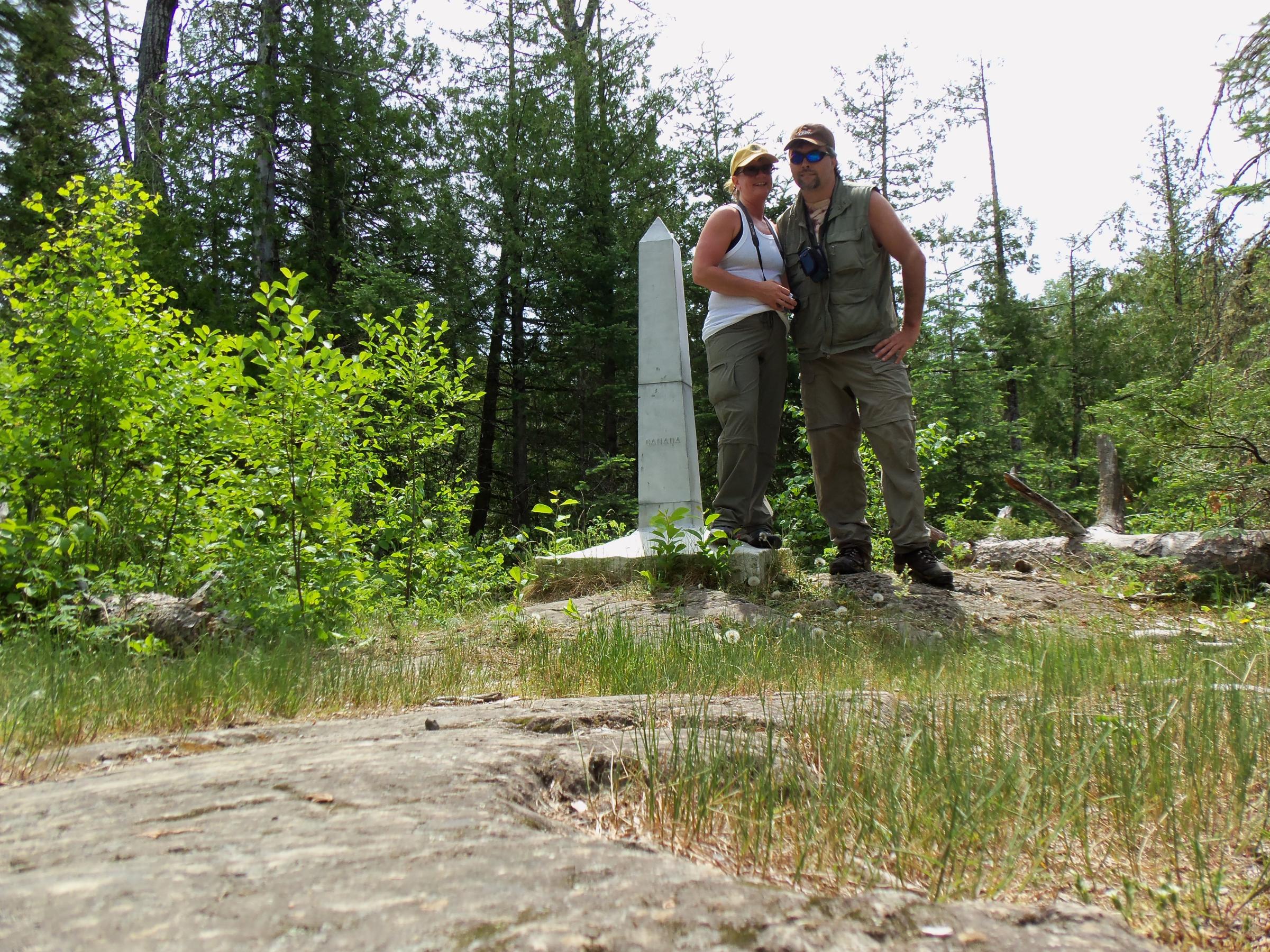 Next was the aptly named Mud bay of Ottertrack. Shortly it opened up into the main body of the lake. There was a group camping across the lake on the Canadien side. Some majestic cliffs also rose up from the shoreline that had an orangish hue. 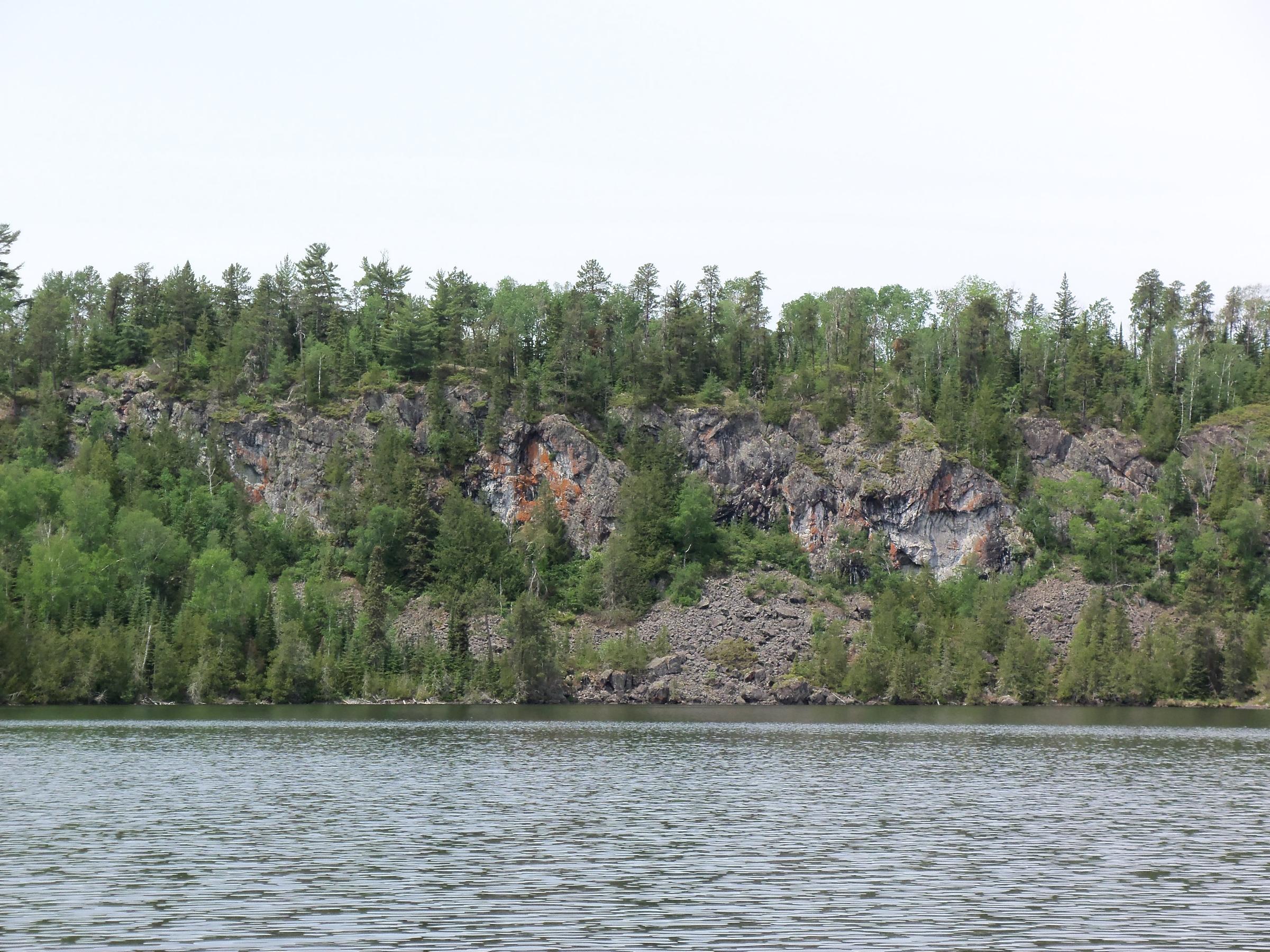 Following the southern shore, we easily located the portage into Ester. Vicky joked, "Hopefully there are some more friendly people coming across this portage?" I quipped, "Let's hope so, as this one is gonna be significantly tougher." The trail instantly climbs up out of the lake before leveling off. It then has a steep continous climb to the top where there is an impressive old white pine.

The trail then descends equally as steeply down to Ester lake. As we were removing the packs from our backs and catching our breath, Vicky asked,"How do you carry that canoe & your pack at the same time?" I replied,"First of all it's not THAT canoe. It's The Black Pearl! Secondly, I don't look too far ahead and try to think about something other than the weight on my back. I don't go across the portages continually asking myself, where's the lake? where's the lake?" Also I normally double portage so there is no need to look to far ahead or look around. We'll see everything there is to see when we walk back to get the rest of our packs/gear. I didn't no it then, but Vicky later told me this simple advice really helped her keep a positive attitude while portaging. As we walked back towards Ottertrack we happened across a grouse and also noted a few impressive cedar trees along the trail.
A couple of Clif bars later we were cutting glass on a mirror named Ester. We stopped at one of the southern campsites to get out and stretch a bit. There were wildflowers in bloom everywhere, especially wild roses. It was fairly shallow in this area with a sandy bottom, ideal for swimming. 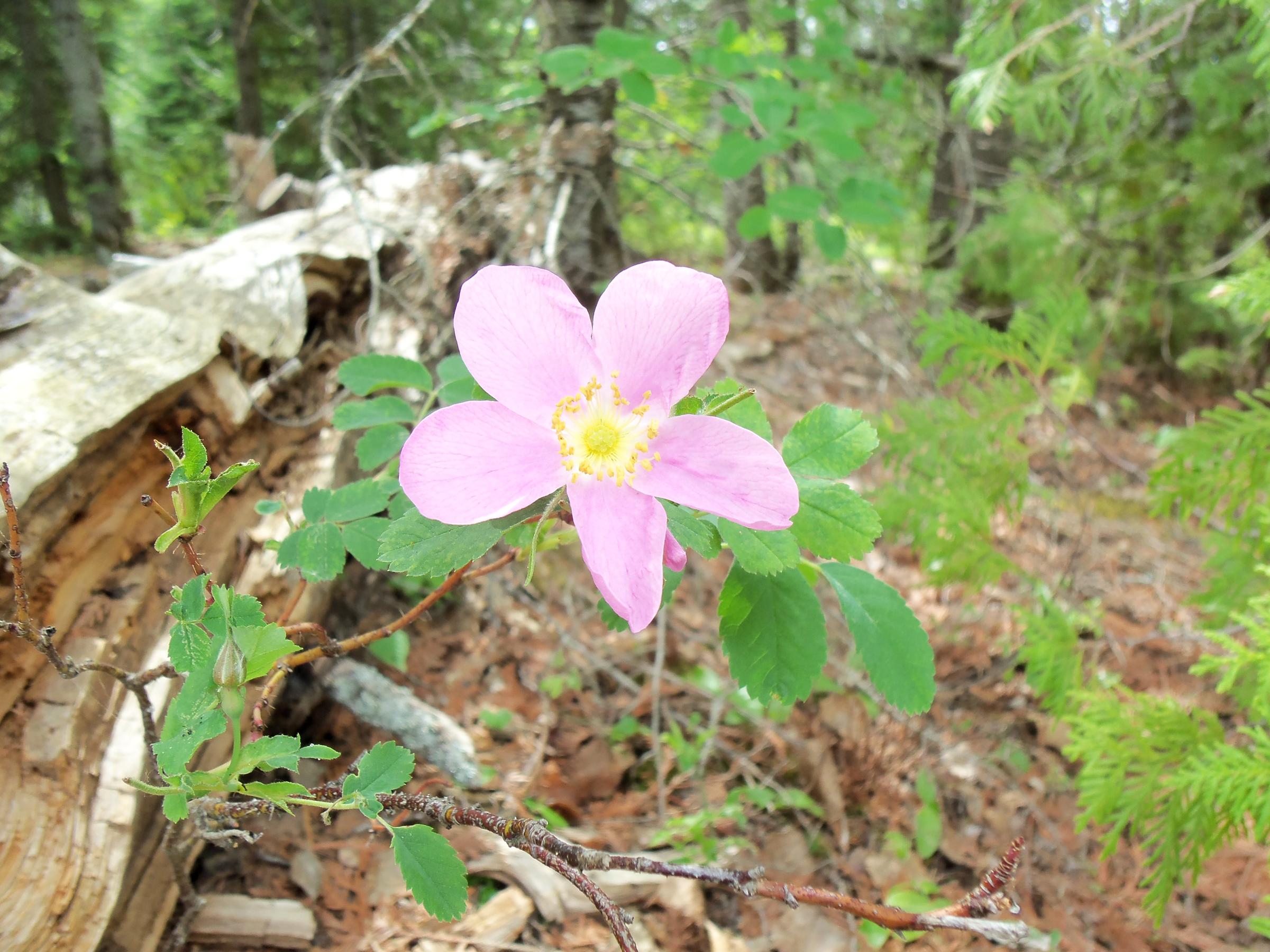 Paddling on through the shallow narrows between Ester and Hanson there was a mud turtle sunning itself. 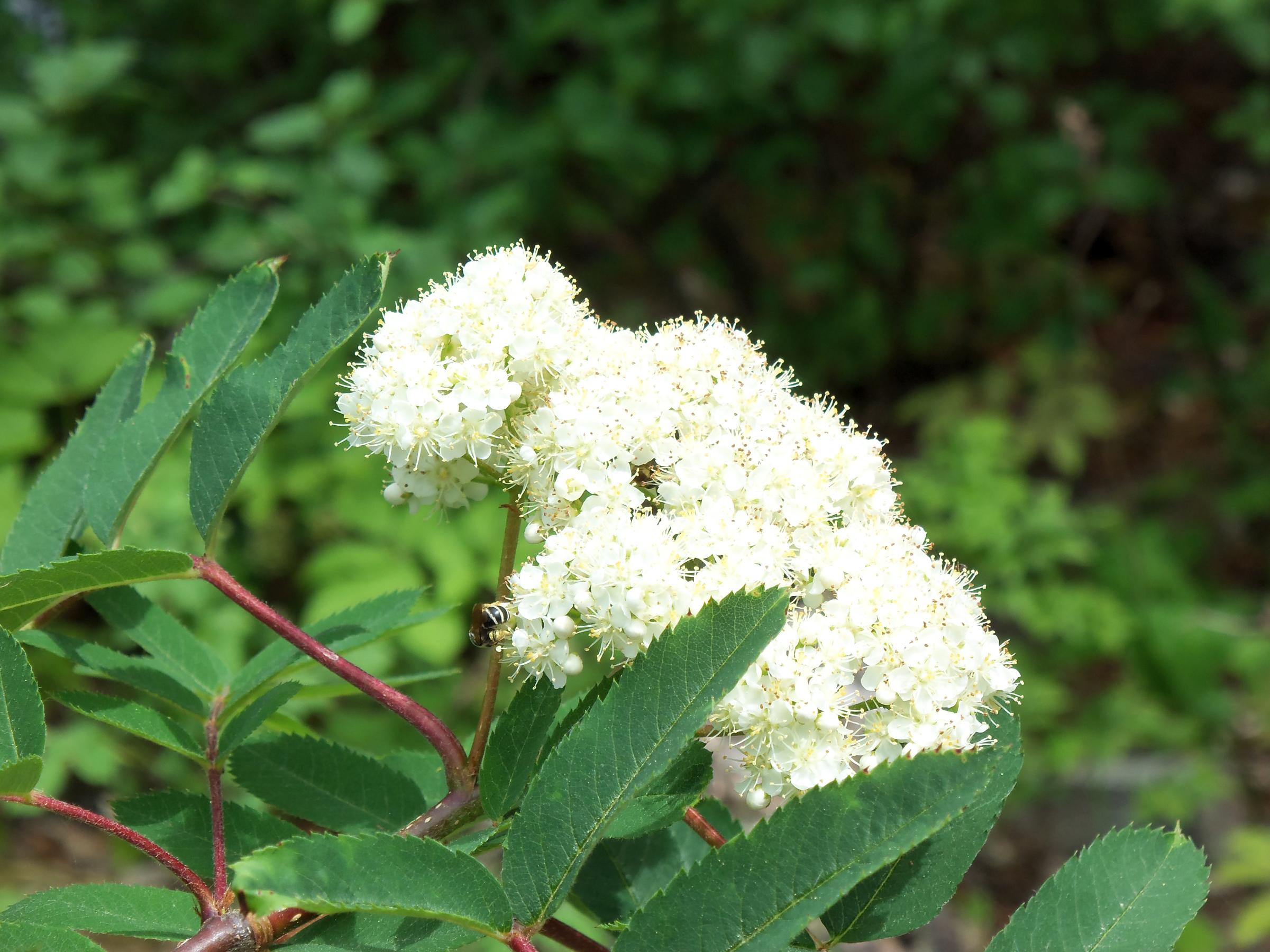 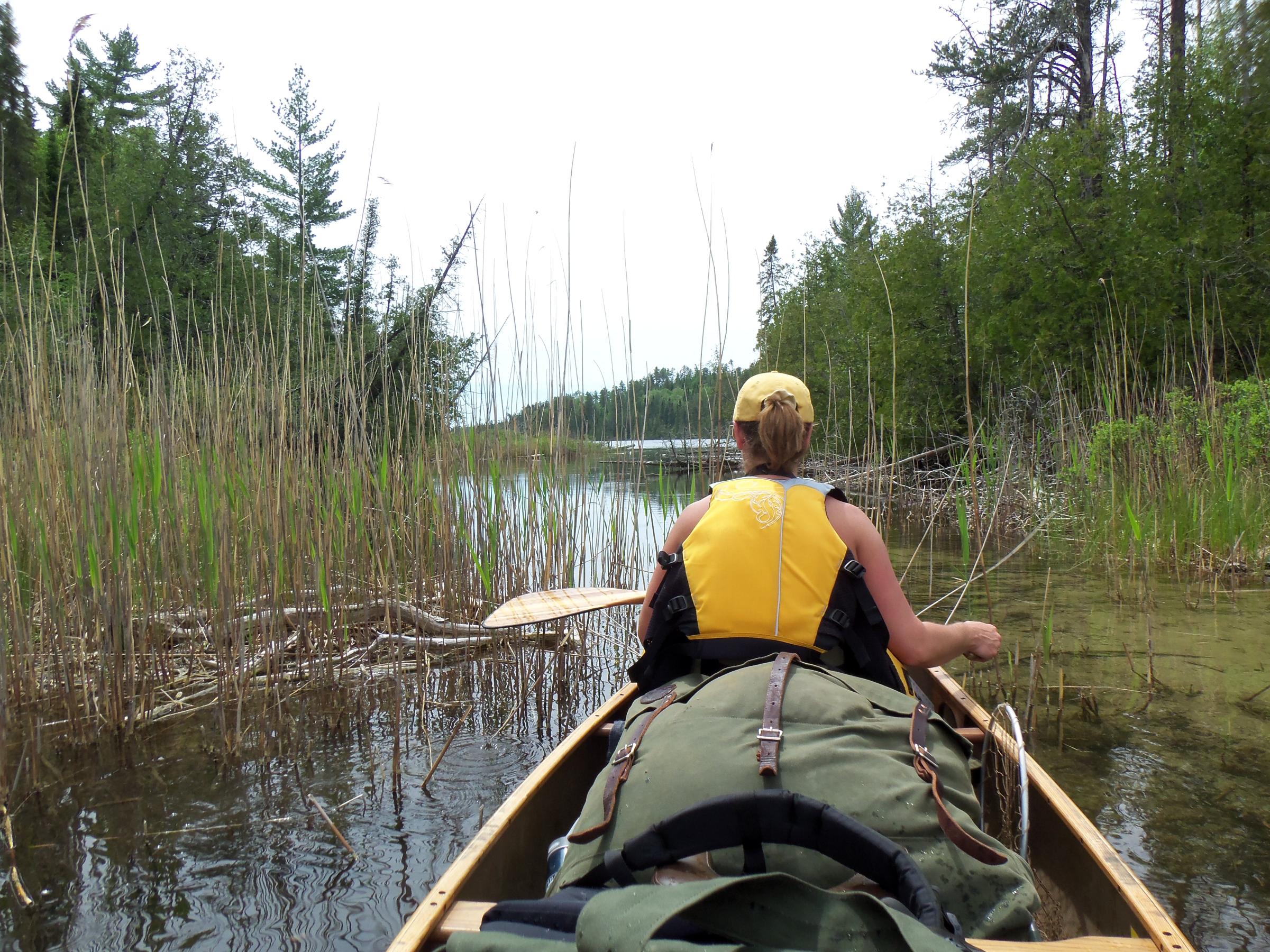 We pushed through into Hanson. Mercifully a breeze had kicked up to help cool us a bit. Soon we were at the last and, from what I'd heard, greatest challenge of the day. The portage into Cherry has a very rocky landing on this end. Also there is a decent campsite just off the portage trail. I'd say that this is the type of portage that will test the strength of the bond in about any relationship? Where thoughts & opinions are shared freely along the trail without being filtered by such things as kindness or politeness and perhaps even good sense. I told Vickie to "buckle up" & I'd see her down the trail. (Probably not TOO far down the trail? LOL) Flat & rocky for the first few rods, the sharp uphill climb begins on a surprising well worn trail. There is a maddening descent just before the actual peak which gives a false sense of the worst being over. I made it to the actual summit before setting things down and looking back to see how Vickie was doing. She looked totally exhausted, but to her credit kept plugging away without serious complaint. We stopped to rest and get a drink. The other side of the portage was a near carbon copy of the previous. Complete with another false descent. The only tangible difference was that on the Cherry end there was an impressive grove of cedars at the landing along with some very pretty purplish flowers. As we finished the portage I can't say enough how impressed I was with Vickies' demeanor and performance across this very tough portage on her first day of her first trip. She was tired, as was I. But NO vociferous complaining, just, a get the job done attitude. Like she'd been doing it her whole life? We sat for awhile in the grove of cedars which provided good shade. Being hot and sweaty in the shade on the grass near water, I would've thought the mosquitos would devour us? Quite the contrary. Very very few mosquitos here. In fact I don't recall any time or area along our whole trip where the bugs were a particular nuisance.
It's a little tricky navigating through a maze of downed cedar trees near the landing, but soon we were out into the main part of the lake hoping the narrows site was open. HALLELUJAH!!! It was! Naturally we grabbed it and began settting up camp. There are 2 awesome tent pads back away from the firegrate, but it was just the 2 of us & we setup right on the lakeshore without too much trouble. 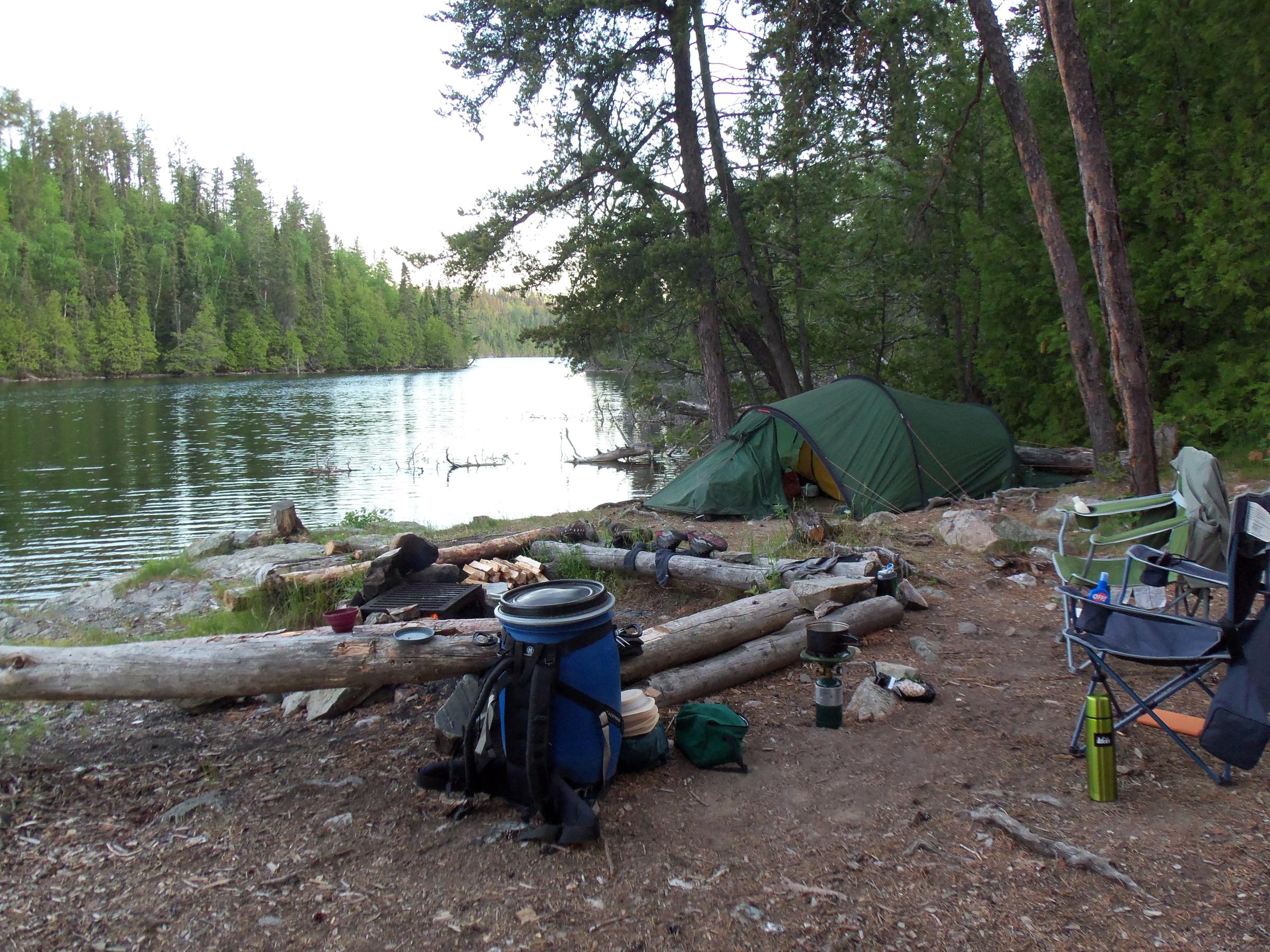 Not having eaten a real meal since breakfast, It goes without saying we were famished. Fortunately there was a little firewood left behind from the previous occupants. Vickie got a one match fire started while I set up the tent. In no time she had a nice bed of coals and our ribeyes were sizzlin'. 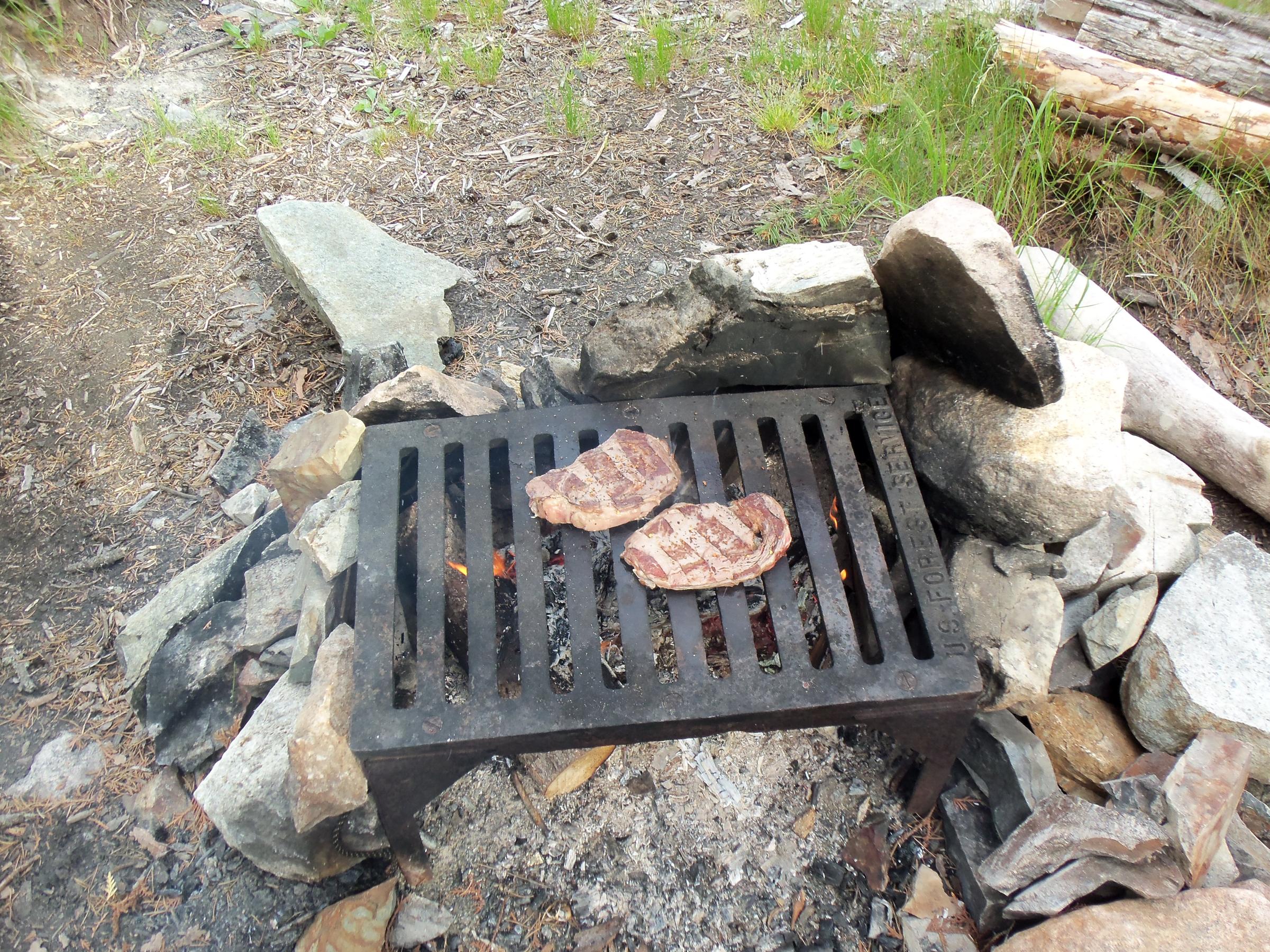 Also boiling some water for our instant mashed potatoes topped with a few slices of melted marble jack cheese......After a long toilsome day, the best word I can use to describe how that steak tasted is, orgasmic. It was a great day! We had made it to Cherry, the worst was now behind us. At least as far as portaging went? Everything had went about as well as one could've hoped for. We both sat back and basked in the beauty of Cherry lake. 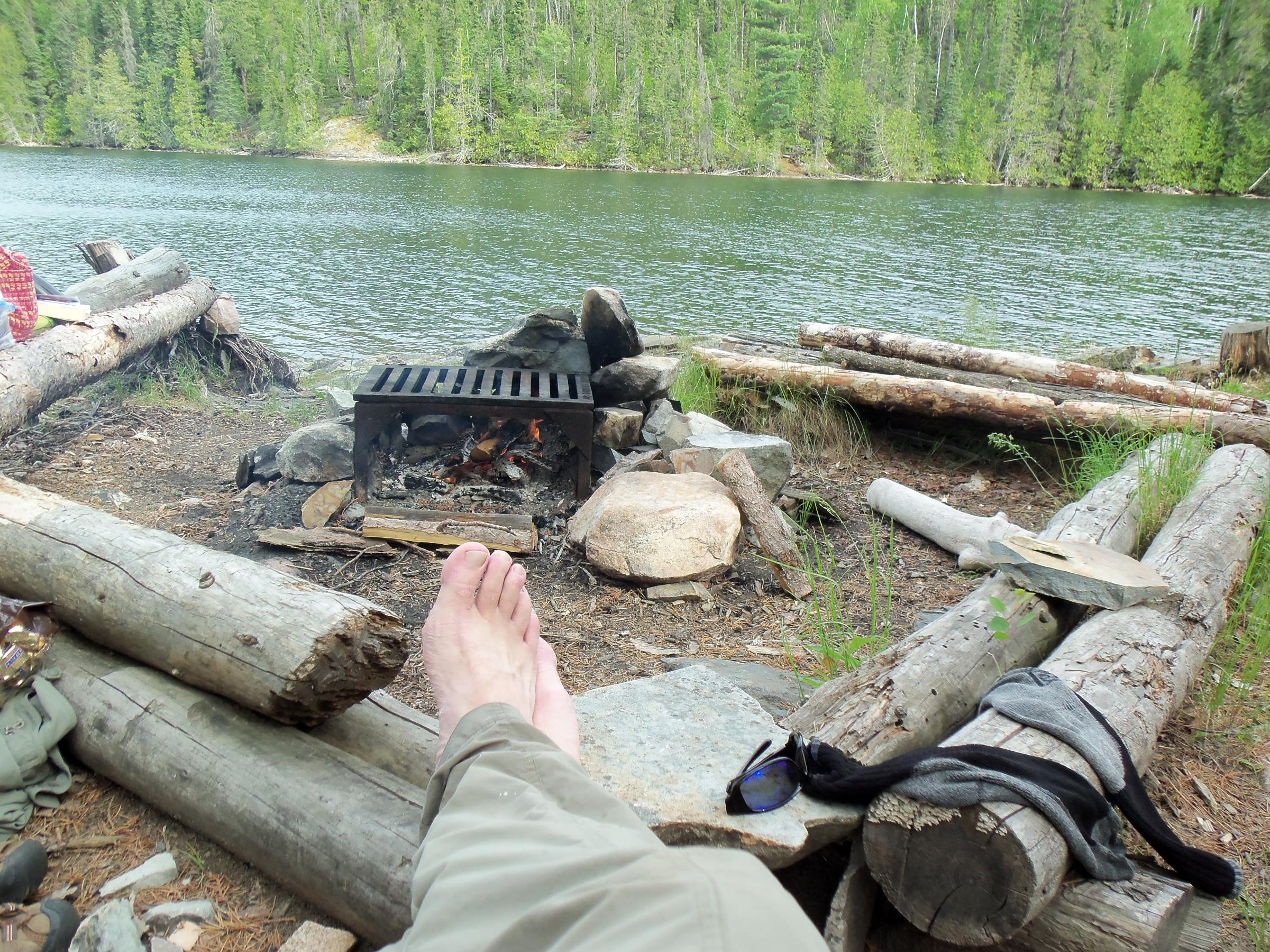