Trip Type: Paddling Canoe
Entry Date: 07/10/2010
Entry & Exit Point: Saganaga Lake (EP J)
Number of Days: 8
Group Size: 1
Trip Introduction:
My wife and I have taken four trips to the BWCA but recently her health has kept her from being outside in the summer. She's encouraged me to venture off on my own and this site helped give me the confidence to try a solo trip.
Discuss Trip: View Discussion Thread (13 messages)
Report
I was scheduled to play golf with my Special Olympics buddy at 4:30 on Thursday but by early morning it had already rained 4 inches and it was clear that we were going to be rained out so I hit the road at 1:00 PM with a 14 hour drive in front of me. I almost always travel with my wife and my IPOD knows that any song with a guitar or drum solo will get a quick scowl from her so it almost never gets to rock on, Debbie Boone and Barbara Streisand run the show. This was different, and I uncased my air guitar and for the next 10 hours I was treated to Hendrix, Cream, Pink Floyd and the like. Except for some additional permanent hearing damage it was a good drive. I’ve decided that when my grandson says something to me that I can’t hear I’ll just assume he’s telling me he loves me. I flew thru downtown Duluth at 11:00 PM without any problem with all of their road construction. I ran out of personal gas at the scenic pull off close to Split Rock Lighthouse. This is what I woke up to at 5:00 AM, quite the beautiful site. 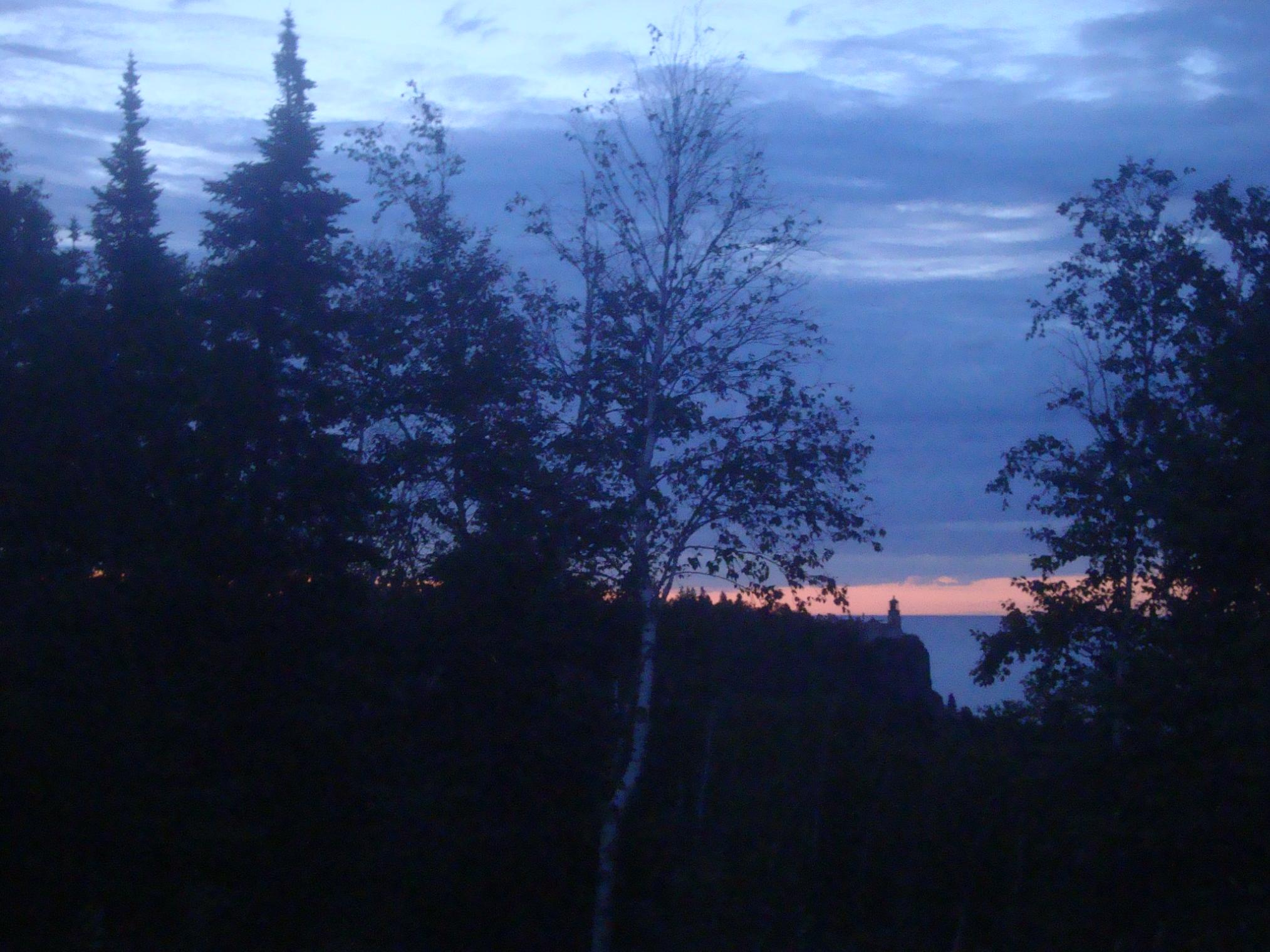 I was in Grand Marais by 7:00, had hot chocolate and a scone, whatever that is, and road my bike around town for awhile. I bought a dozen Ciscoes at the Holiday station and hopped back into the car and arrived at the Trails End campground late morning. I was scheduled to be towed into Devils Walk Bay on Saganaga on Tuesday, but after talking to Deb at Seagull Outfitters we decided I could go in on Sunday, so we got a new permit. She was surprised that there was still a permit available for Sunday. Their business looked pretty good to me but it appears that fewer people were going up the Gunflint the week I was there. The two days I camped at Trails End I spent fishing and site seeing. Caught a few SM and small northern in Gull Lake, tried Aspen and West Pope with little luck. I drove over to the Gunflint Lodge that night and had a nice meal at their Red Paddle restaurant. On Friday night I tried the Ciscoes from a likely looking spot and used up six of them and only caught one northern. I was using eight pound line and 9 inch leaders and they were getting bitten off. On Saturday I drove back to Grand Marais and bought 17 pound line and 18 inch, 30 pound leaders along with four dozen ciscoes and 7 dozen leeches. I was now ready to kick ass and take names.
On Sunday I caught my tow to Devils Walk Bay in Saganaga at 8 and by 10:00 had found a campsite and was sitting in the rain. The rain was short lived and I got set up and headed for the portage to Roy Lake around noon. There have been two posts about Roy, one great and one awful. The great one talked about many huge SM and that was what I had in my mind. The portage into Roy wasn’t long but it was very mucky and had lots of turns with roots and rocks to navigate. 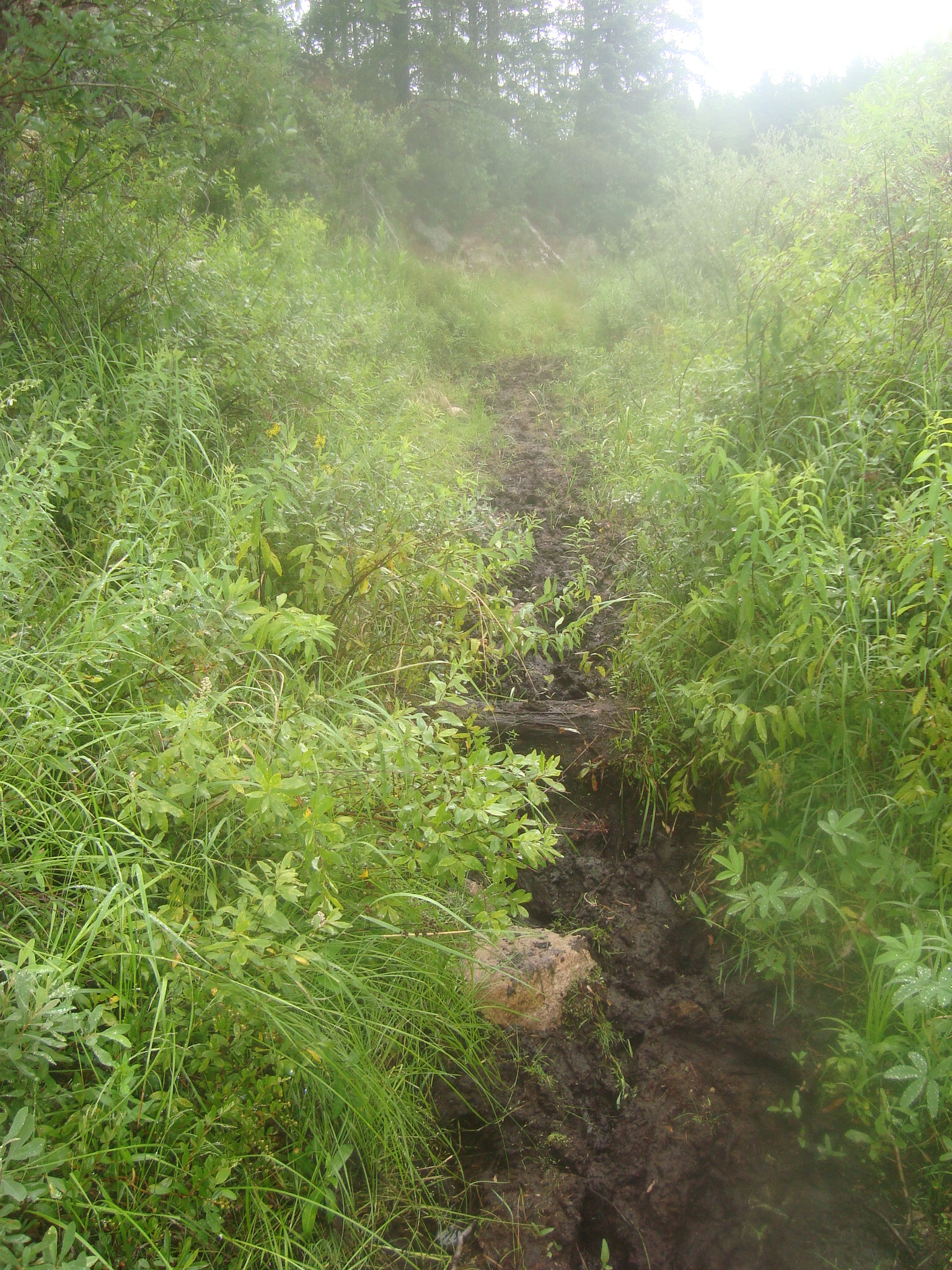 I spent 4-5 hours fishing and did catch a few 18+” SM but not the number or size that I had hoped for. 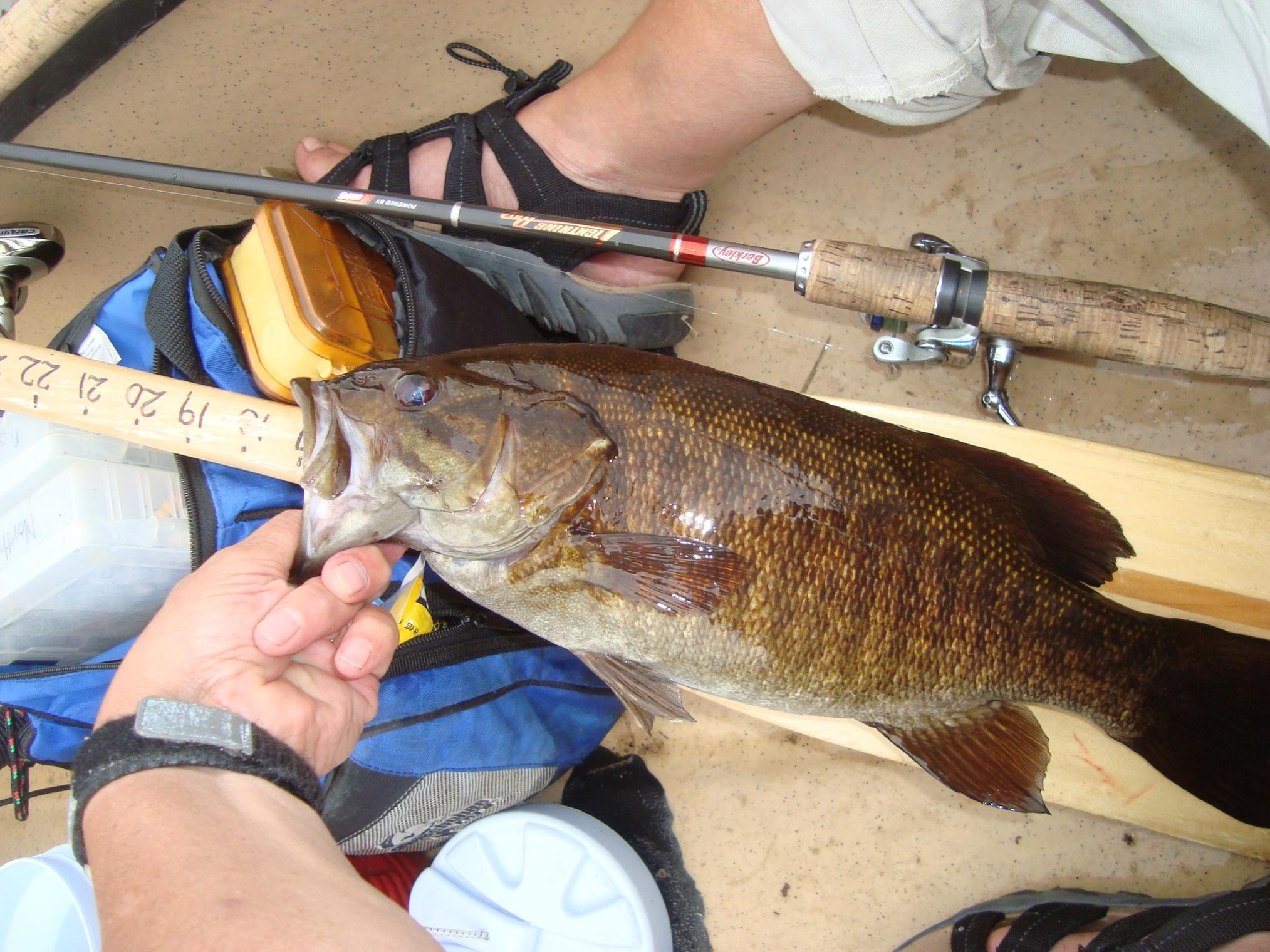 Apparently it was ok because I went back again the next day and had about the same success. I did have a run when I caught a 15” SM than two more 18” fish bing-bing. I was using this mepps spinner: 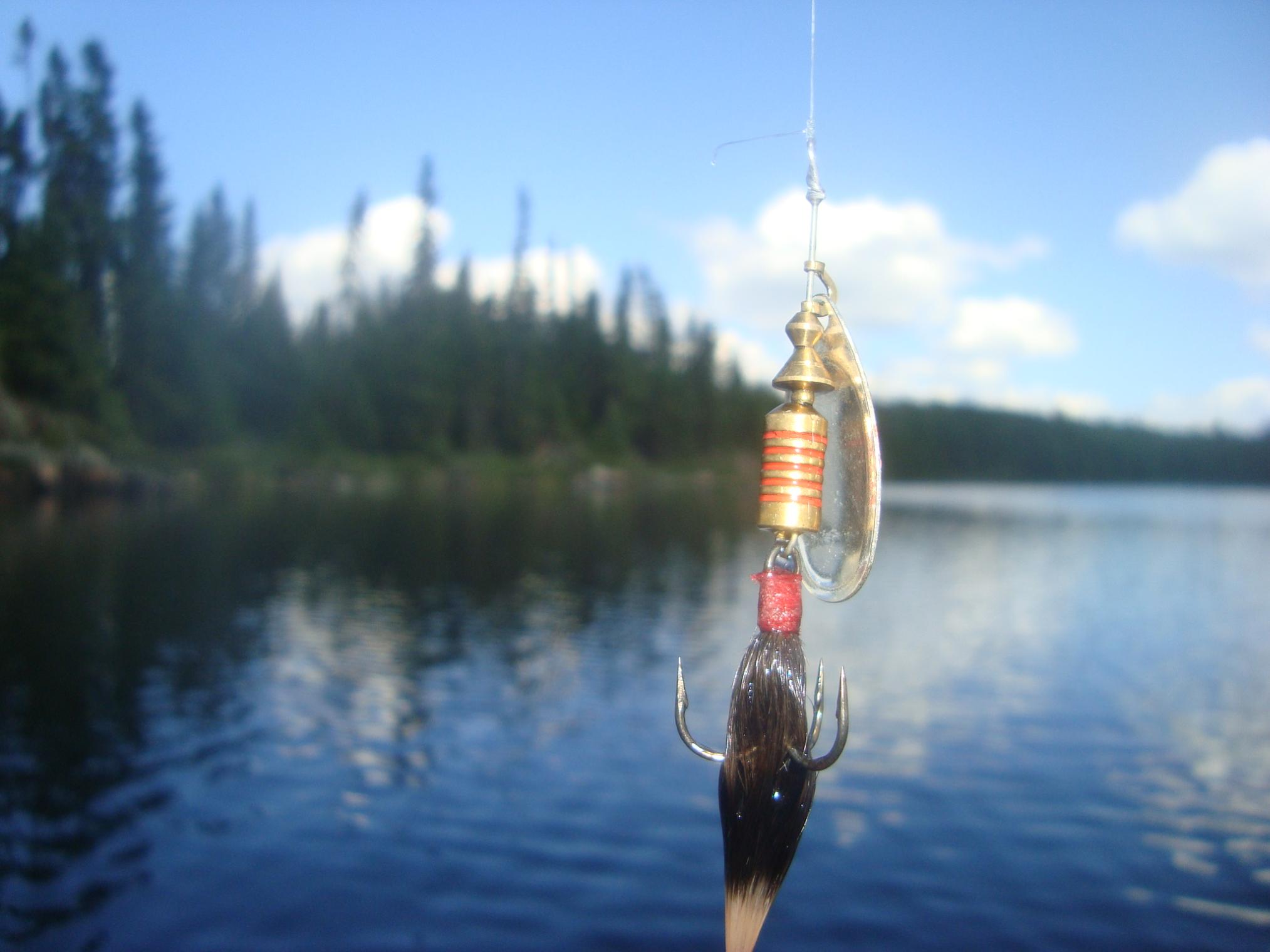 I took a picture of it because I was afraid I’d loose it which I did on the next cast, crap!
I probably won’t make the detour into Roy again. As I was pulling into the canoe landing at the camp site I heard what had to be the biggest fish splash ever, it sounded like a cement block being dropped from the high board at the pool. I hopped out and started tossing a top water lure to the area that the sound came from. After a few cast I noticed a beaver swimming in the area and he proceeded to make the same sound again with his tail, lesson learned.
I had the back campsite of the two in the bay and it was very nice, great landing area for the canoe and a nice view. I could only find one tent spot thou so it isn’t for a large group.
The next day I packed up and headed for Red Rock Lake. The wind was already starting to pick up and it took me longer that I thought it should. After the 10 rod portage in, I started canoeing past site after site that were occupied. I passed five sites before I came to the last one on the lake which thank goodness was empty. My wife and I had camped at this site a number of years ago and at that time it had a nice canoe landing area. Since then several large trees have blown down where you use to land and now it’s much more difficult to get in. I did do some harbor construction but it’s still a pain. The site has room for several tents and has a nice fishing area out in front. There’s a long trek back to the latrine and when you arrive this is what you find: 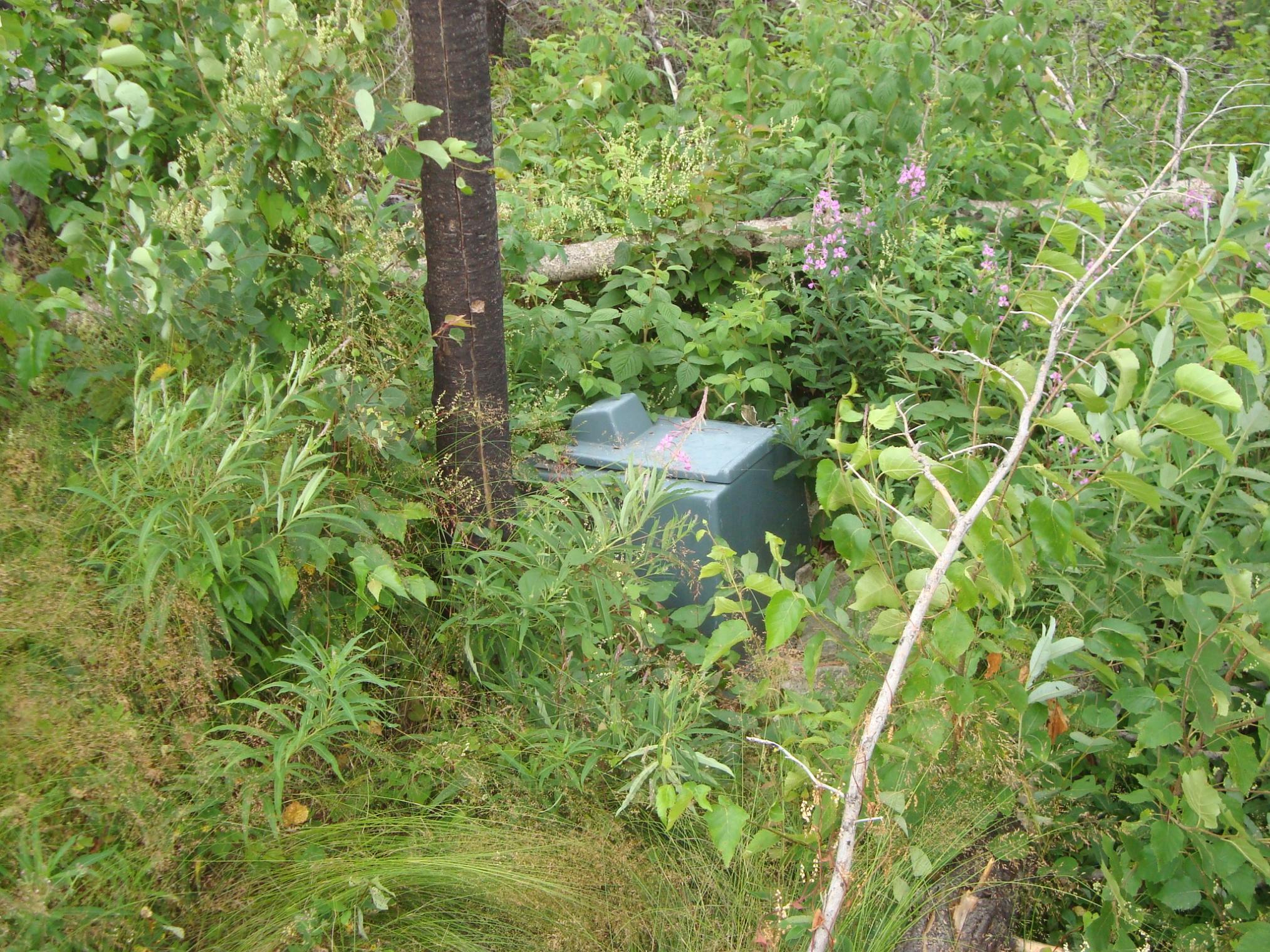 However much I paid for my permit, none of it had been used to clear the area around the vault. I made do, but my wife would have had me hacking the flowers and weeds back.
I had used some of the ciscoes at the first site without any luck so I wasn’t very optimistic about using them here but I threw one out and a few minutes later I was fighting with this 37” brute. When I was reeling him in I would have sworn that he was 45+. 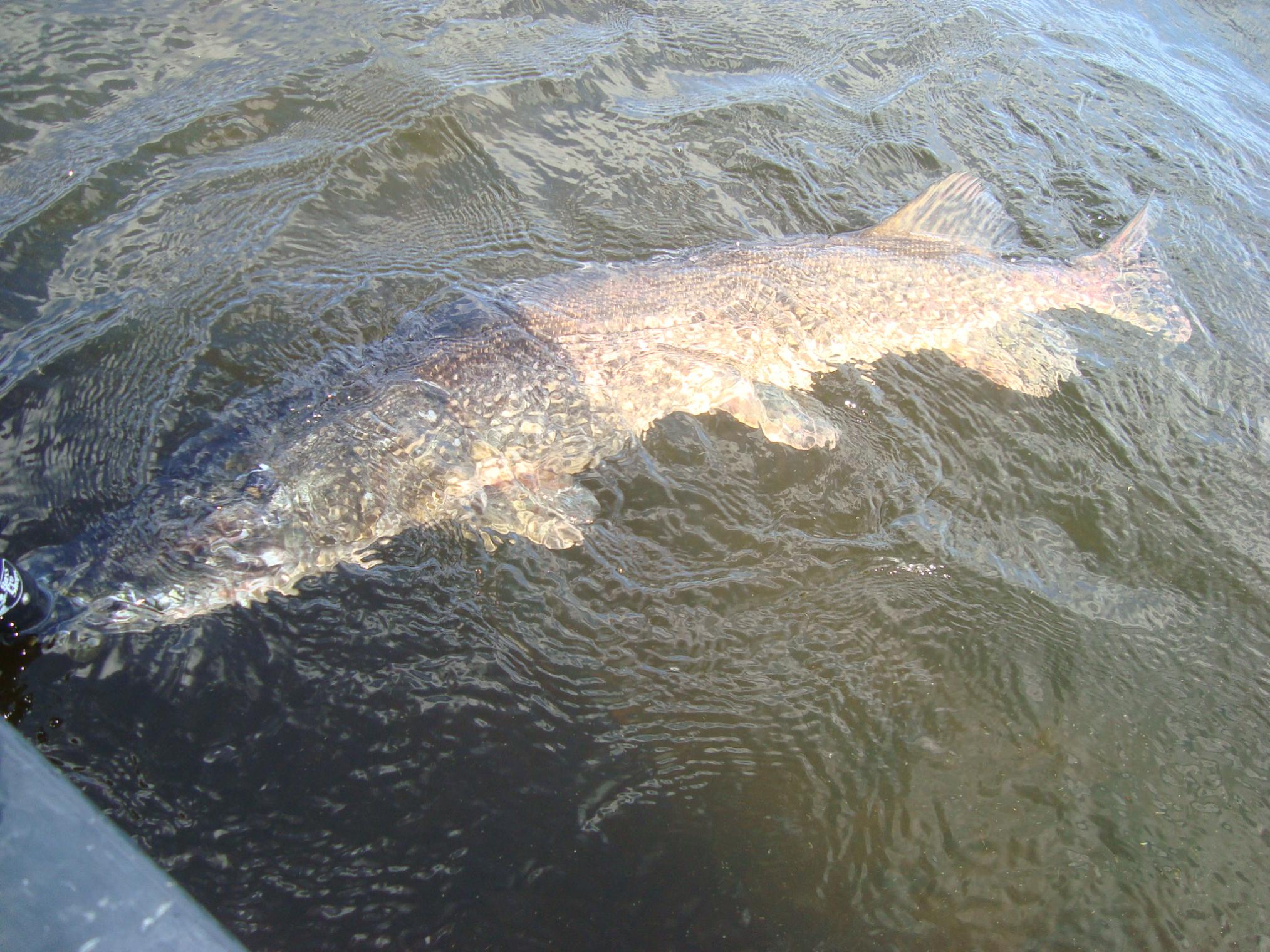 For the next hour I was humming War’s song “Cisco kid, was a friend of mine”, unfortunately that was the last ciscoe that came thru for me. All four days that I was at this site were windy and kept we stuck at the campsite for big parts of the day. When I did get out I caught good numbers of SM on leeches and all types of other presentations. I also caught two nice walleye’s and ½ dozen mid-size northern. After a rain shower one evening I paddled across the lake to a sheltered bay and was trying a top water lure. A huge fish hit the lure and for a few seconds I thought I was in for the fight of my life, just that fast it was over and my lure was gone. It looked like a SM but must have been a northern that cut the line.
The bugs never were bad, a few biting flies came and went and mosquitoes chased me on the portages. I picked maybe a pint of raspberries and caught a couple SM on the way out to take home, anything to give to my wife so she’ll let me go again!
Here is a picture of some of the equipment that worked well for me: 1. Basketball net anchor works like a charm. 2. Water repellent spray for tent, kept rain at bay. 3. Insulated thermos with two lids kept leeches happy for six days. 4. Spot message sending beacon let wife know that I was ok each day and where I was at. I also talked to Deb at Seagull before going in and if I would have wanted to I could have sent her a message to pick me up early. 5. Hard to see, but it’s a tool to hold the mouths of teethy fish open while you extract hooks. 6. Maxi-Deet 98.9% deet kept bugs away, other stuff I brought smelled better but didn’t do the trick. 7. Three legged chair really helped when I was stuck at the campsite in the wind. 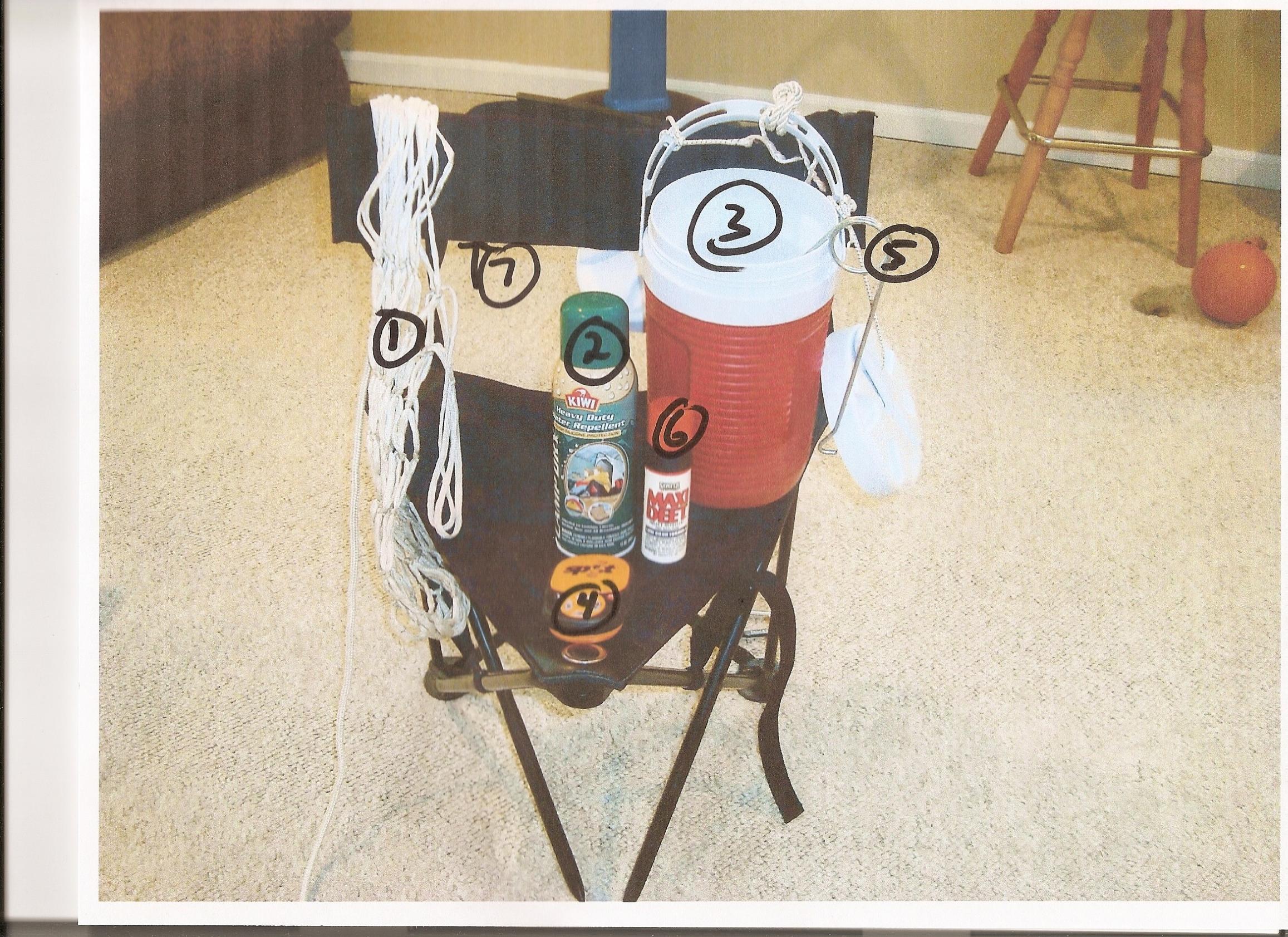 The only item that was a bummer was the fish finder that I bought. I’ve had it out several times on trial runs and it worked fine but it didn’t work in the BWCA. I brought extra batteries and tried them but no go. 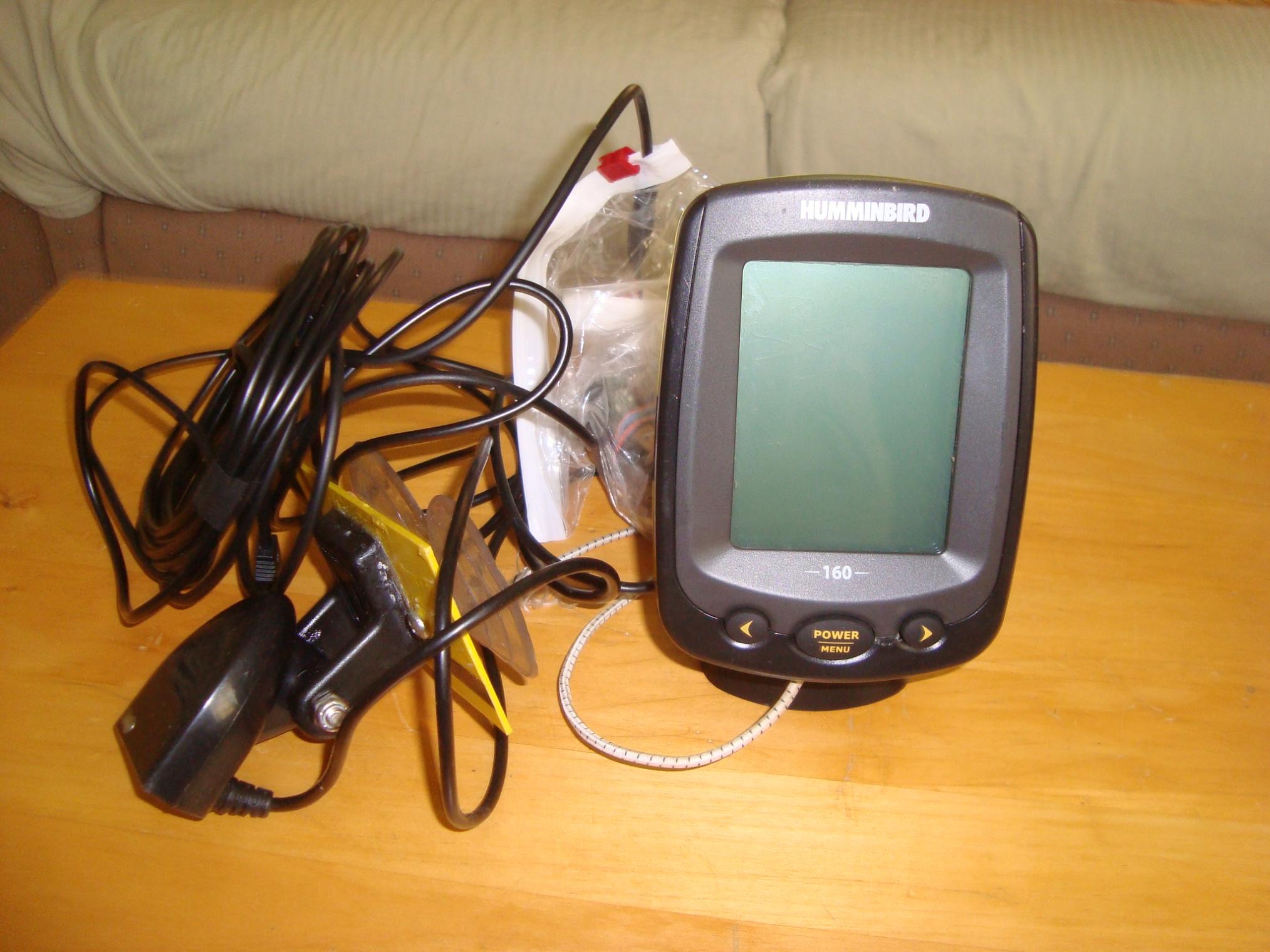 Overall it was a rewarding, enjoyable experience. I hope my wife is up to a trip next year, but if not, I'll be in some lake trying to catch my first 20" SM. 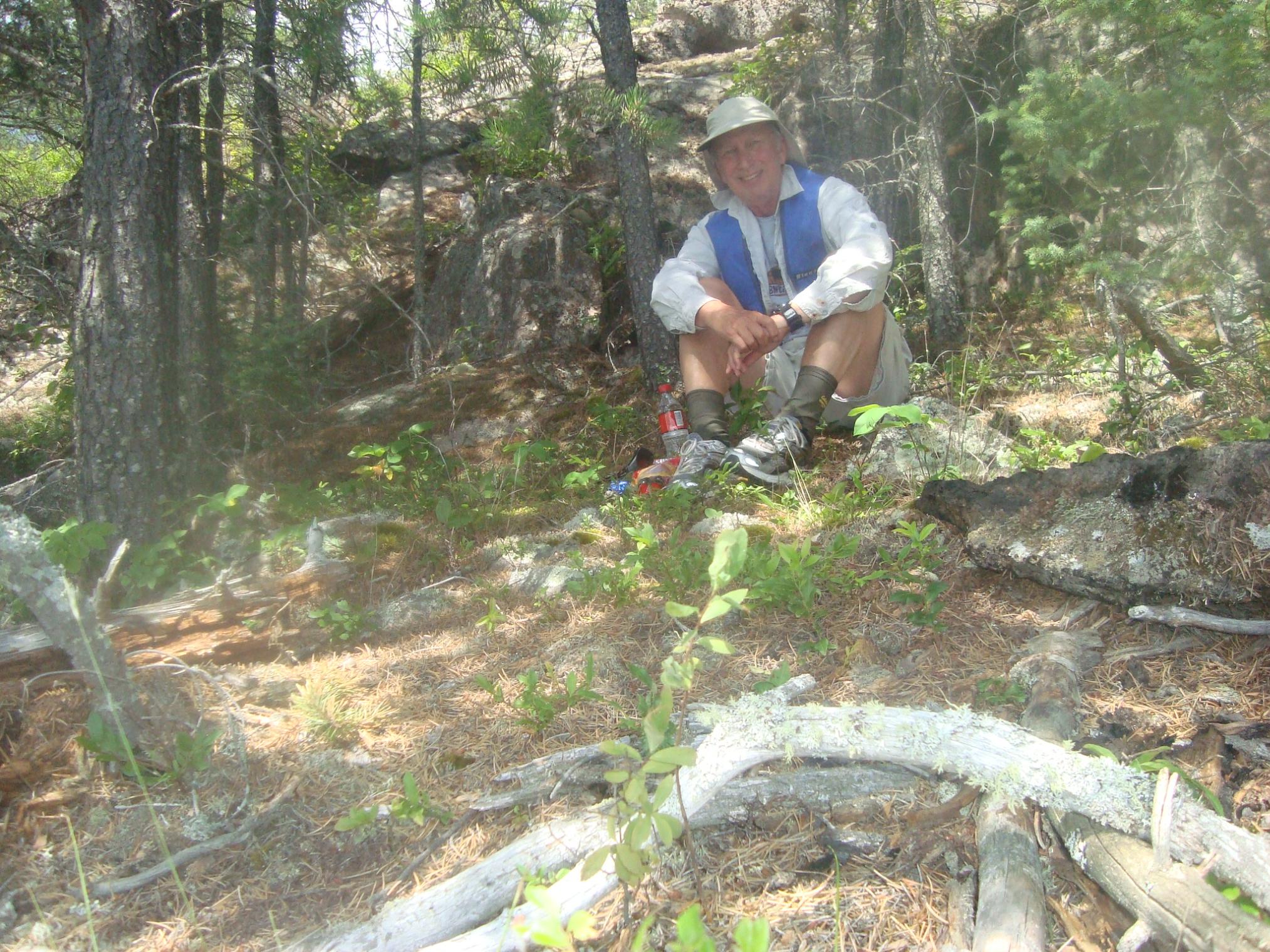 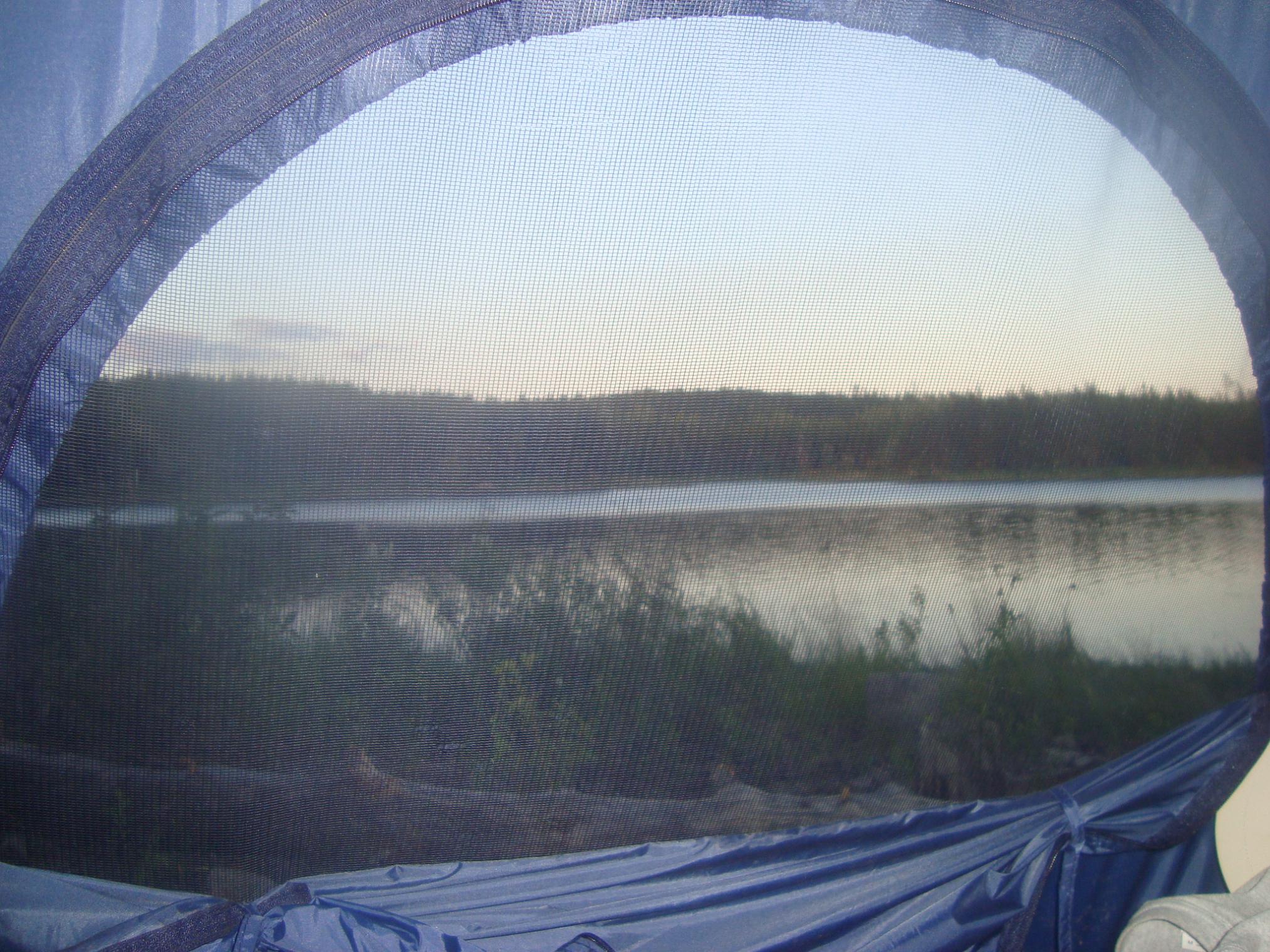 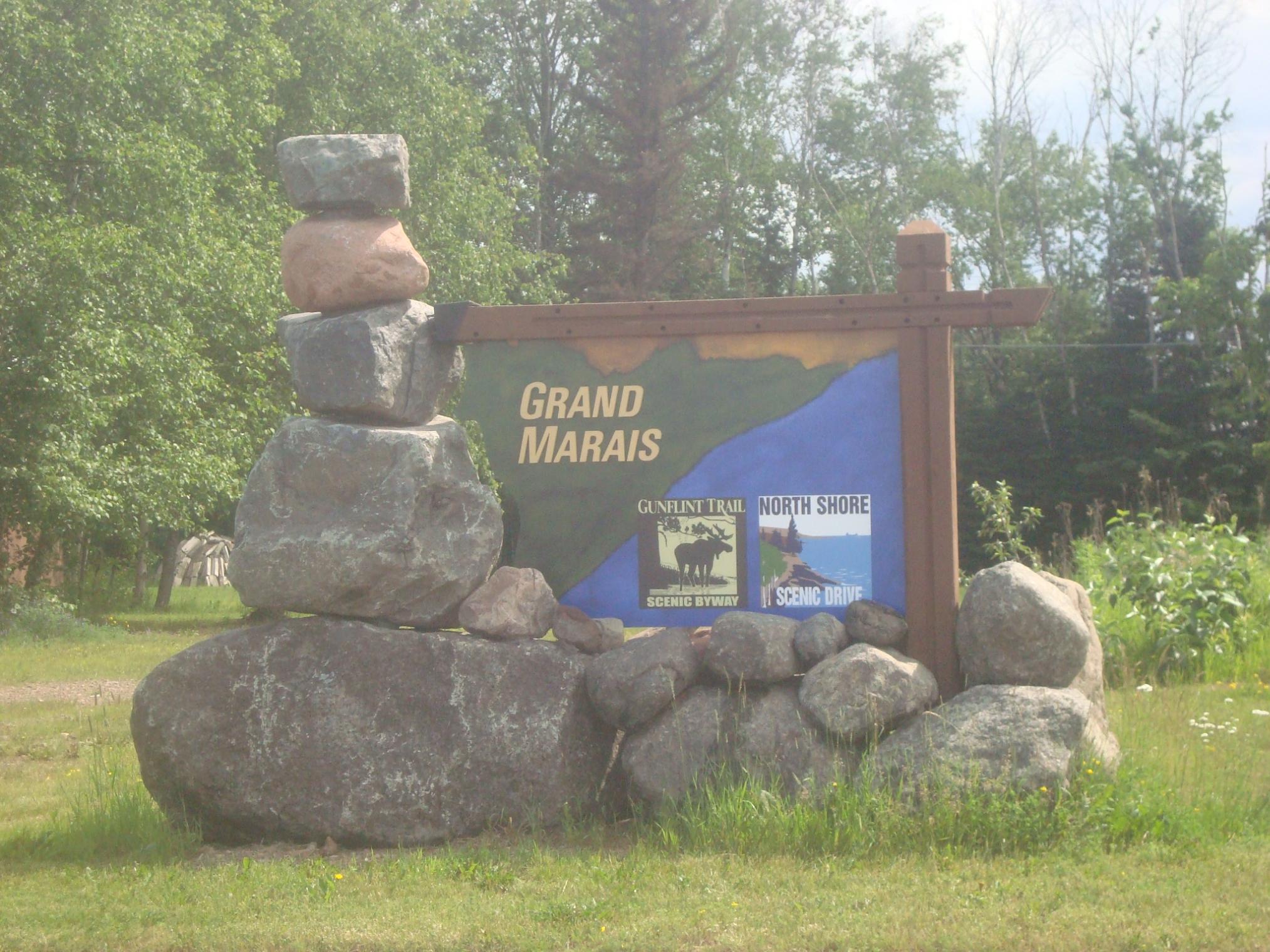 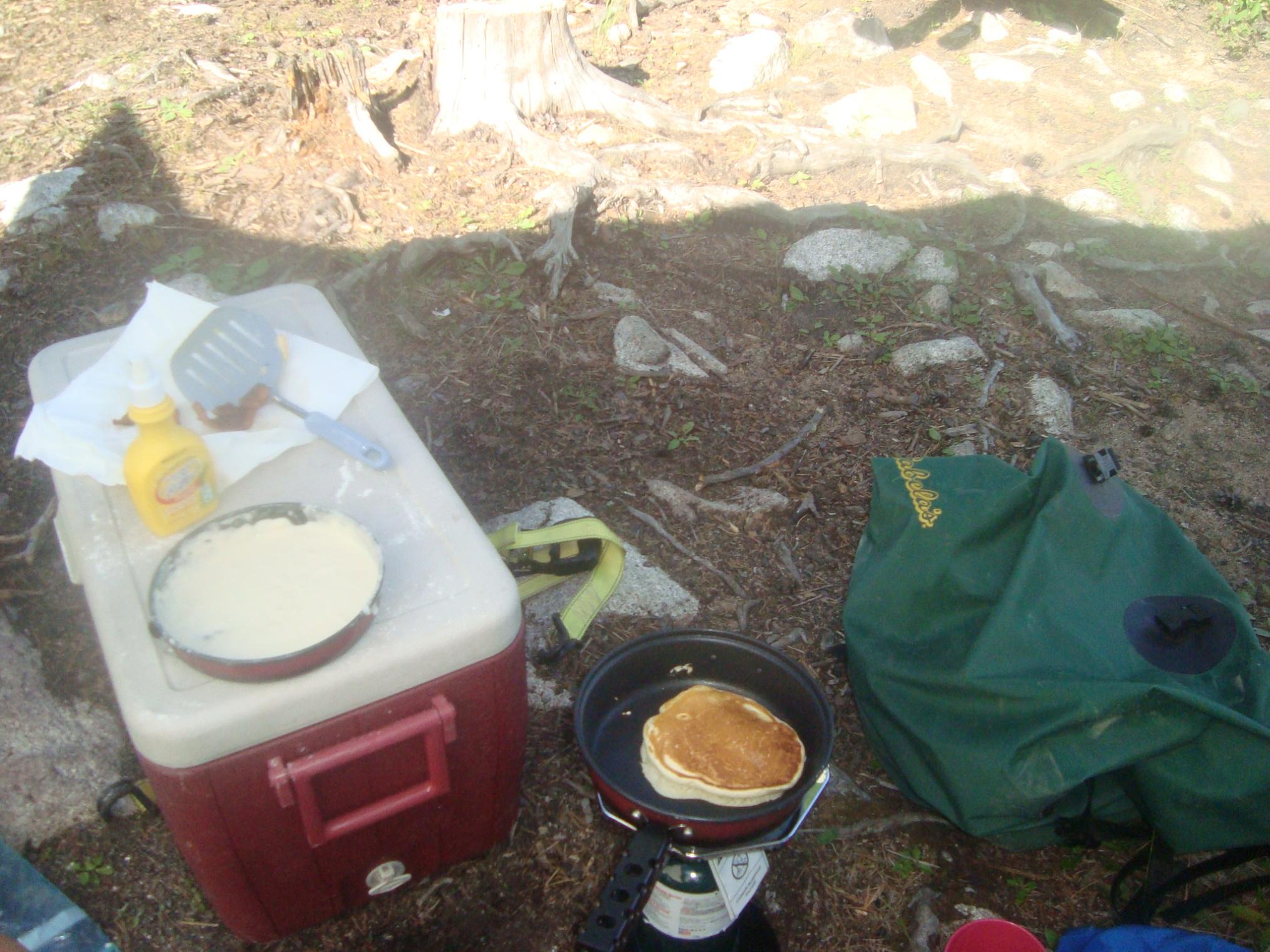 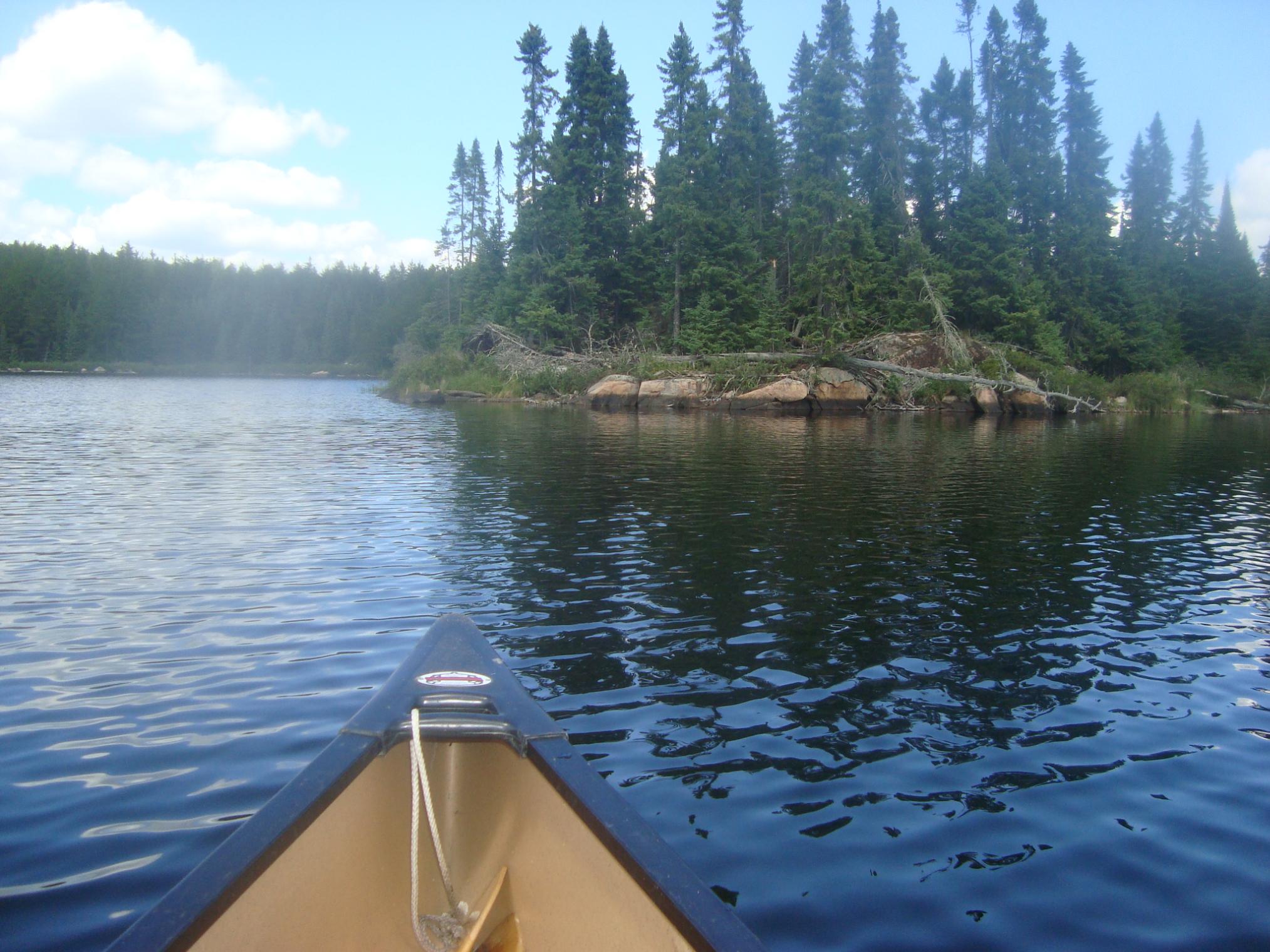 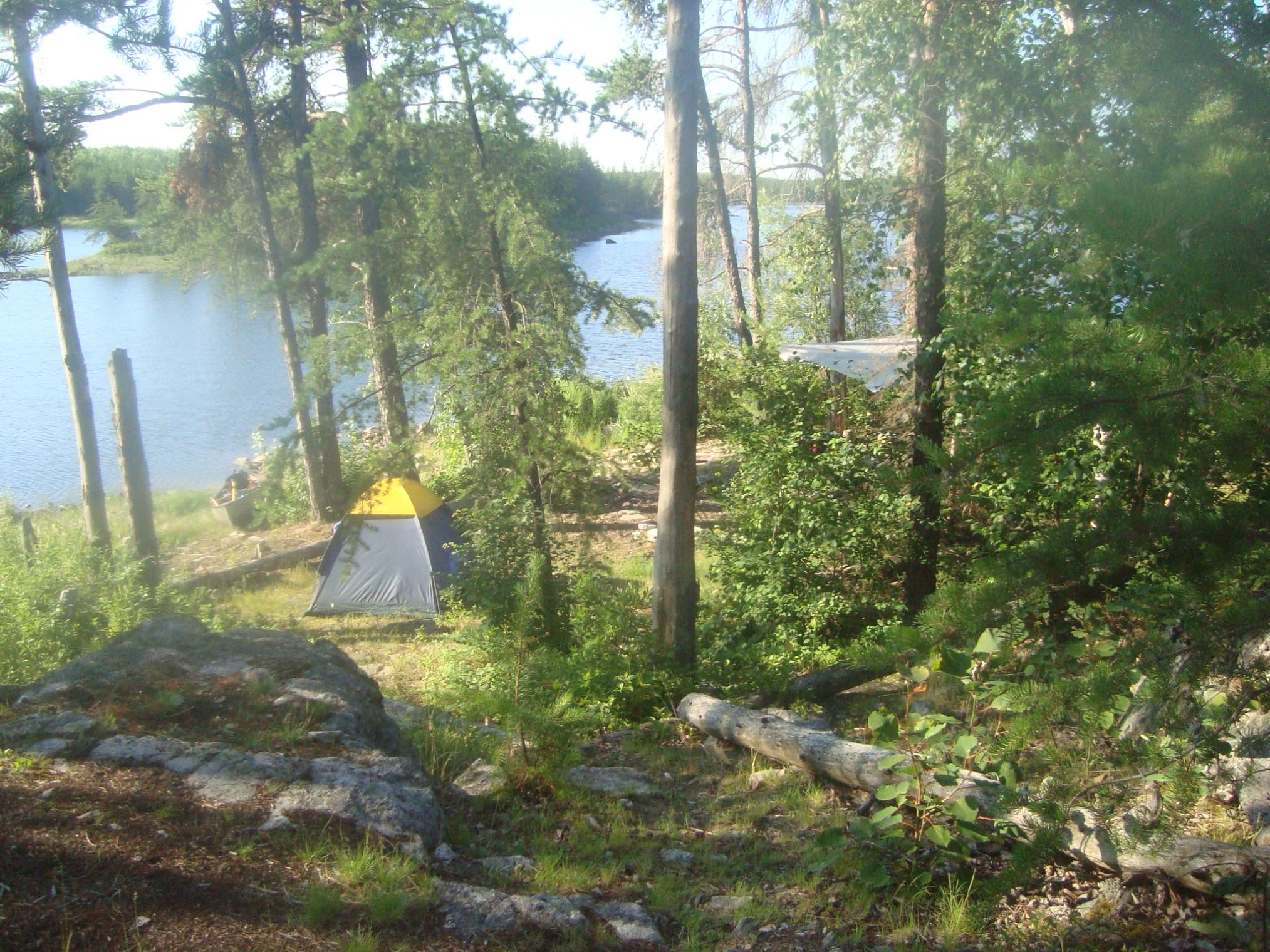 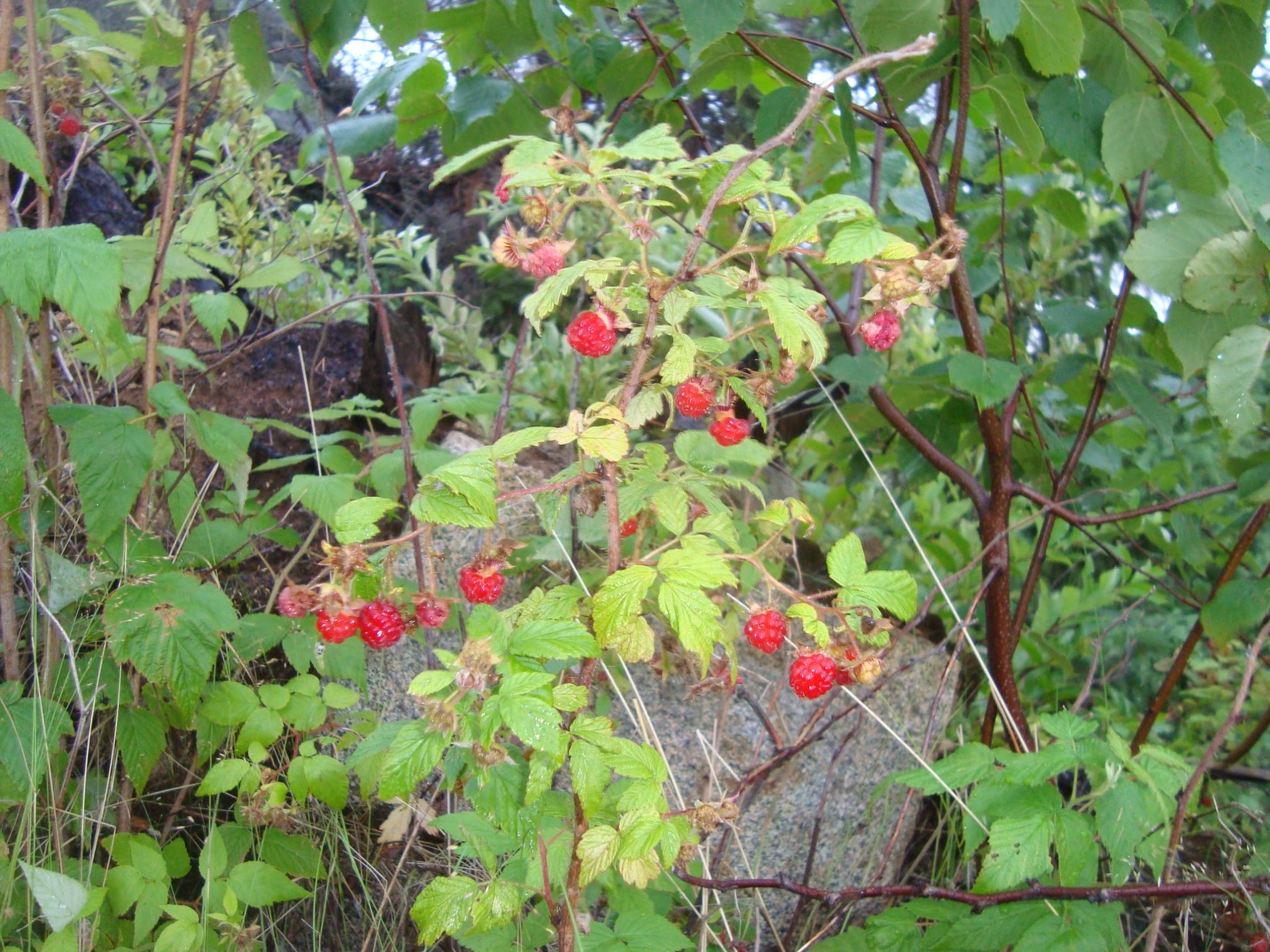