Trip Type: Paddling Canoe
Entry Date: 06/09/2010
Entry & Exit Point: East Bearskin Lake (EP 64)
Number of Days: 1
Group Size: 4
Trip Introduction:
I had been planning a vacation to BWCA for a while. My wife found a brochure for Bearskin Lodge and paid a deposit for a cabin. I was planning something a bit more rustic like a tent but if this is what would get my wife and children to the BWCA then it was a good plan. The cabins looked nice and this would be fun. Just prior to the trip my wife had to change her plans and stay home, plus one of my children had to stay at school and study for her boards. But three of my children went with me on the trip . I was looking for a day trip starting at East Bearskin Lake and after reading some discussion on line. I decided to try the trip to Johnson Falls and back in one day.
Discuss Trip: View Discussion Thread (14 messages)
Report
With our first family trip to BWCA area I wanted a day trip to experience a little of what BWCA is known for. The trip was the first week of June 2010. A little early for vacations in the area. But there were few people and almost no biting bugs (my youngest would disagree).

My ultimate goal was not a trip to Johnson Falls. I was looking for a nice day trip that could be a challange for myself and my family. Johnson Falls was my choice (after some good suggestions) since I was staying in a cabin on E Bearskin Lake. There is a public access point in the camp grounds, the entry point 64 further up the lake. Didn't choose the other day trip options simply because I was trying to save a few $ and not pay the lodge/outfitter to transport the canoe and kayaks to a starting point.

Our route for the day trip was paddle to the S Eastern corner of East Bearskin Lake, portage to Alder Lake, about 2/3 down the north shore to the portage to Canoe Lake. North East corner then the 232 rod portage to Pine Lake (up hill, down hill, back up hill... you get the picture). Then about a mile hike through the trees to Johnson Falls. Still early in the season and the trail was a bit overgrown. 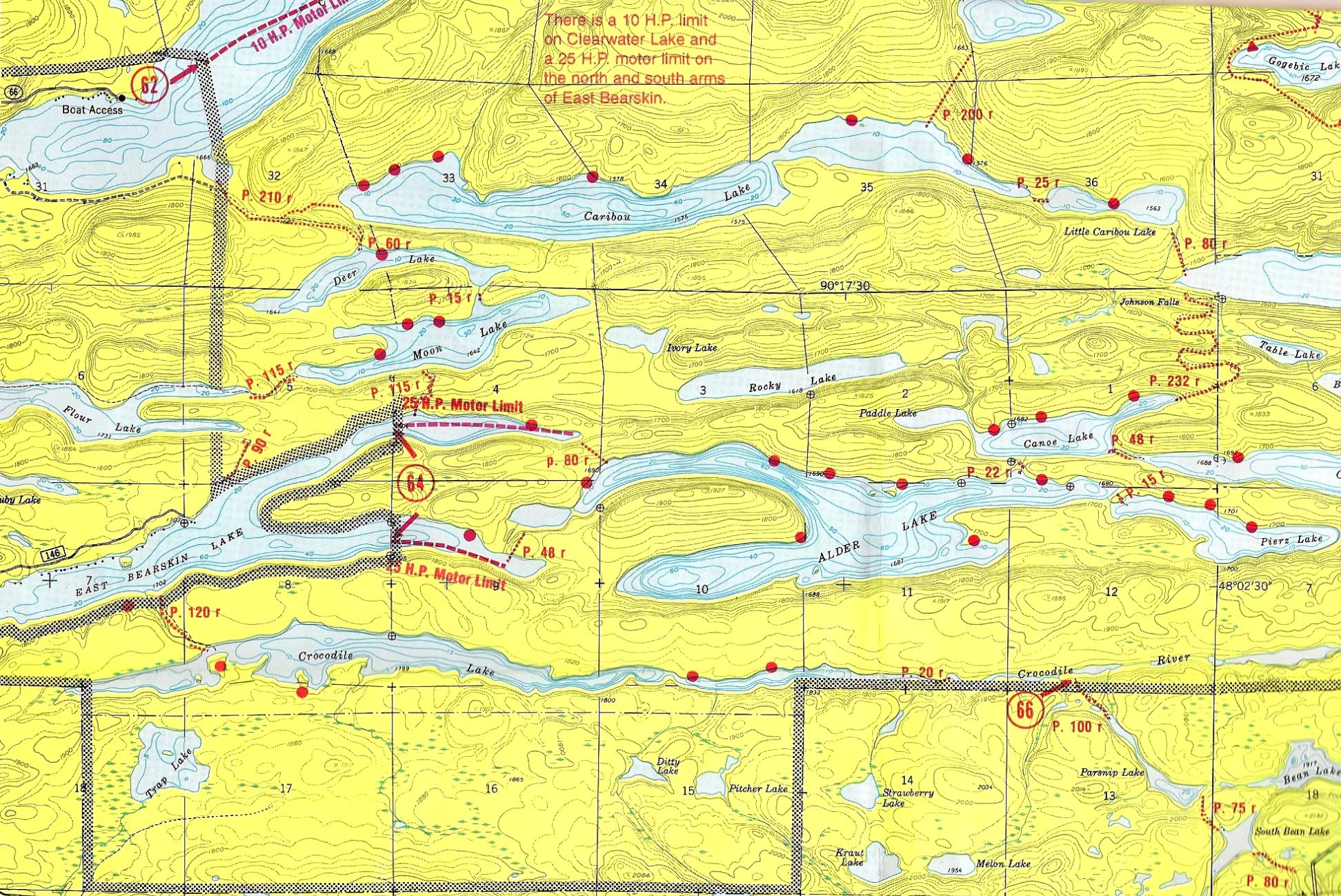 We were a group of fairly inexperienced paddlers. Most of my canoeing has been on rivers and streams in the Midwest. My children have less experience, usually on trips I dragged them on. In the morning the weather was looking decent. Some clouds with a chance of rain. We decided to go for it. What made the day difficult was the weather was threatening and windy. At one point it started raining when we were at the falls. 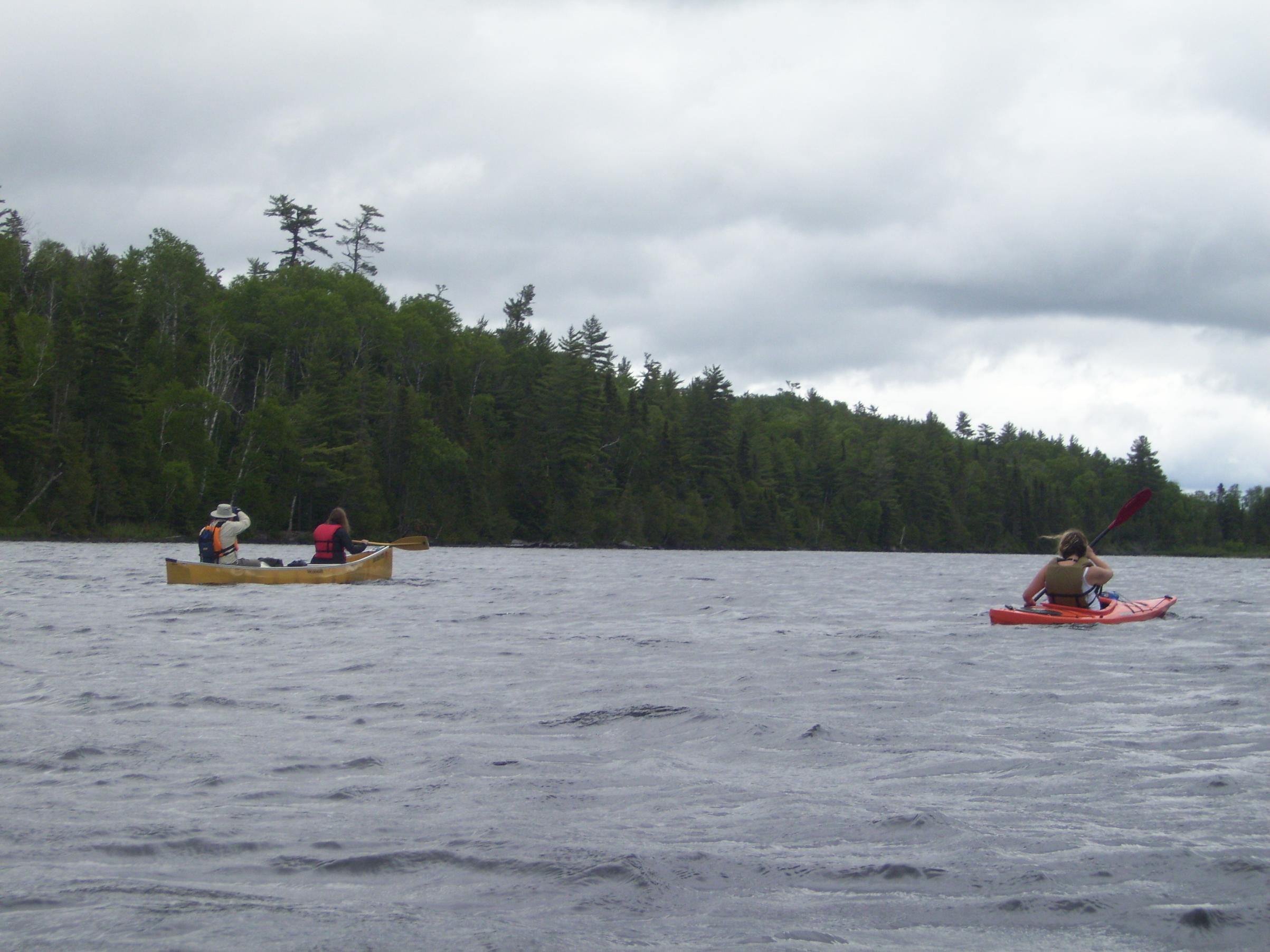 East Bearskin is a long lake but fairly narrow. Sheltered pretty good from the wind. This lake allows motors on boats so there were a few groups fishing. The portage to Alder was easy to find it was 48 rods but fairly easy. This was a new experience for my children, my son (engineering student) wanted us to try reinvent portaging. Tried his idea on the return trip, didn’t work very well.

Alder lake was also fairly sheltered but I felt we were in a head wind when we were going through the more open area in the middle. I thought this was a good bonding experience except the two kayaks kept going off on their own. I couldn’t get them to realize the importance of staying together in case one of us went in. The water temp was cold and we had dry clothes but I was concerned I would be the one that went in for a swim. The portage to Canoe Lake was only 22 rods.

Canoe lake was small but the portage from Canoe Lake to Pine Lake was tough. We left our canoe and kayaks at the take out point at the start of the portage. This was my first time in BWCA and I am not use to trusting strangers with my gear (with a back ground in the military you never left anything unsecured). Learning to trust strangers is a good thing. For us the portage was just a hike. The hike was a long hike but we handled it. (Not bragging, I am over weight and out of shape and my oldest daughter on the trip was 7 months pregnant).

After the portage you followed a path that was unmarked but easy enough to spot. My guess the hike was probably a mile but seemed like a couple. The reward for our efforts was the falls. We ate lunch at the base of the falls. It was also suggested to swim in the water at the base but it was too cold that day. The air was not too cold but the water was. 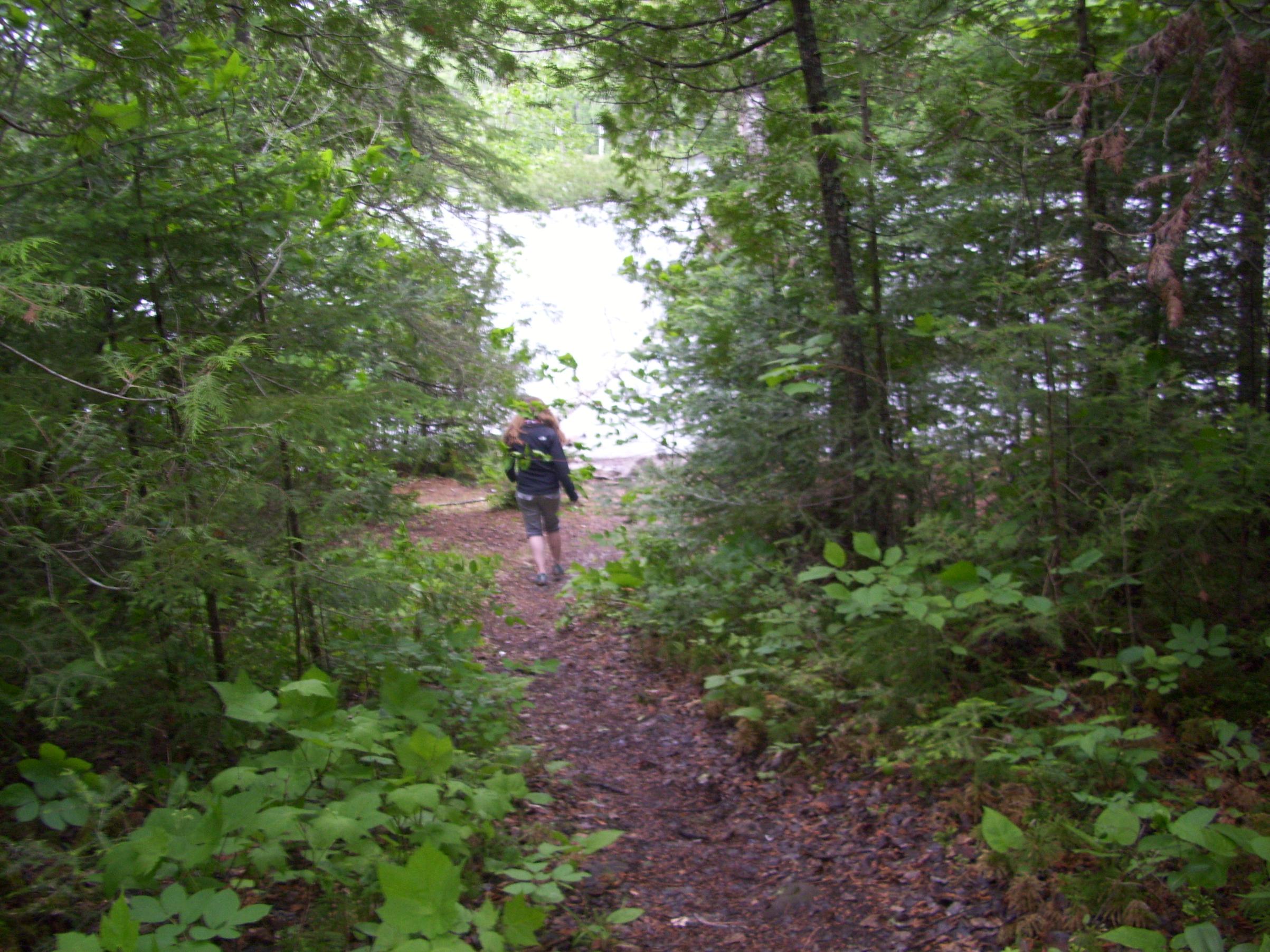 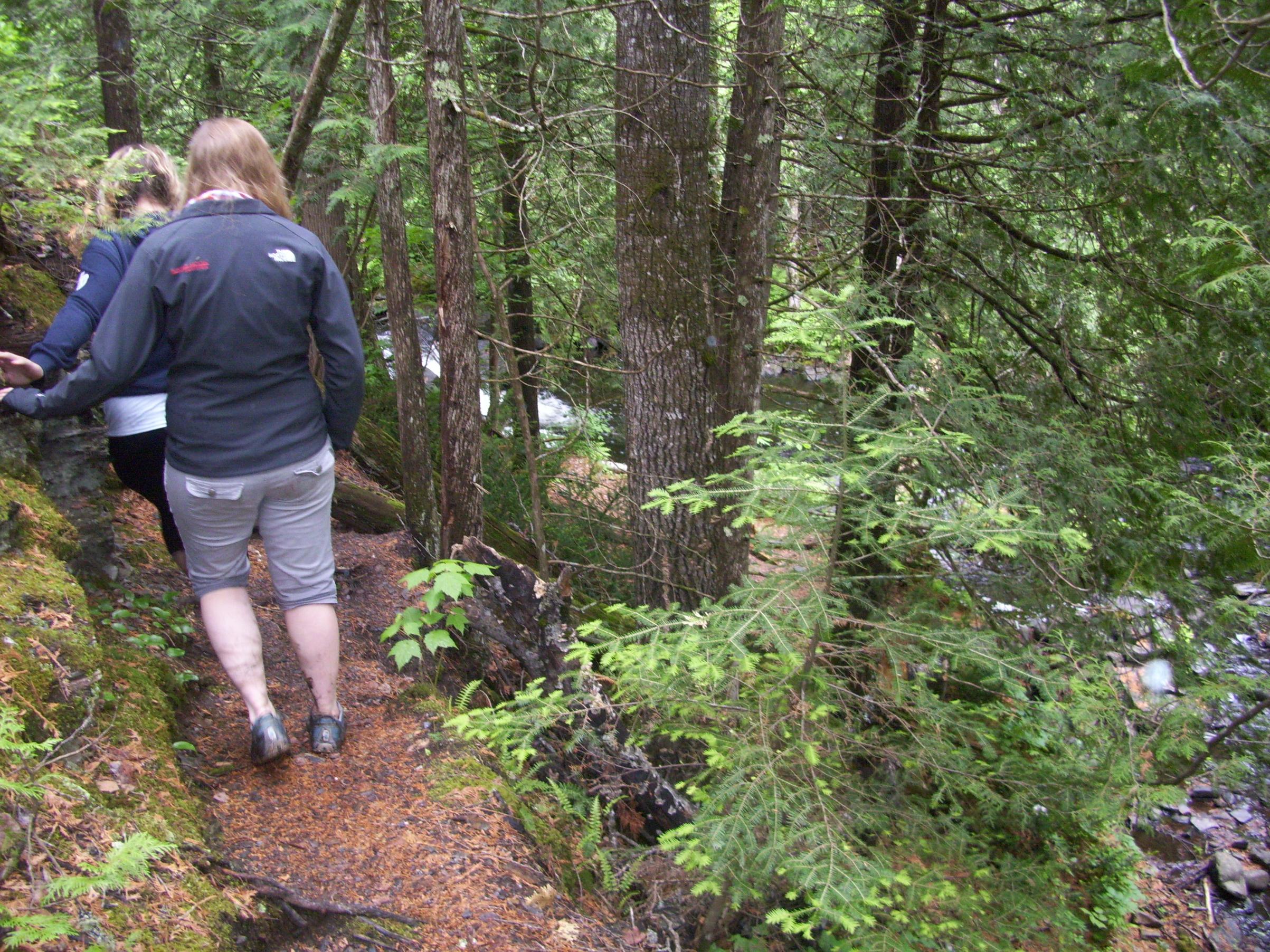 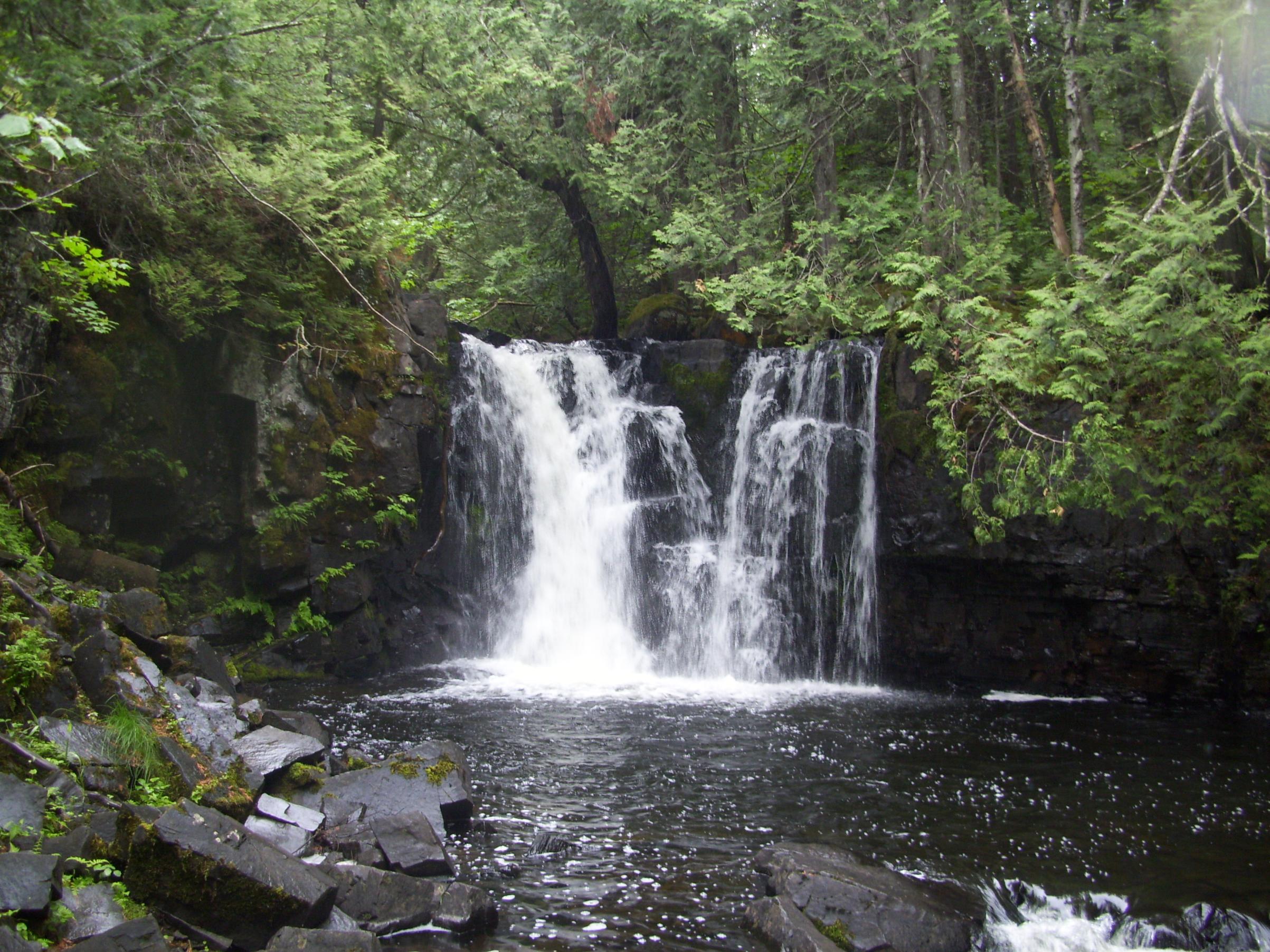 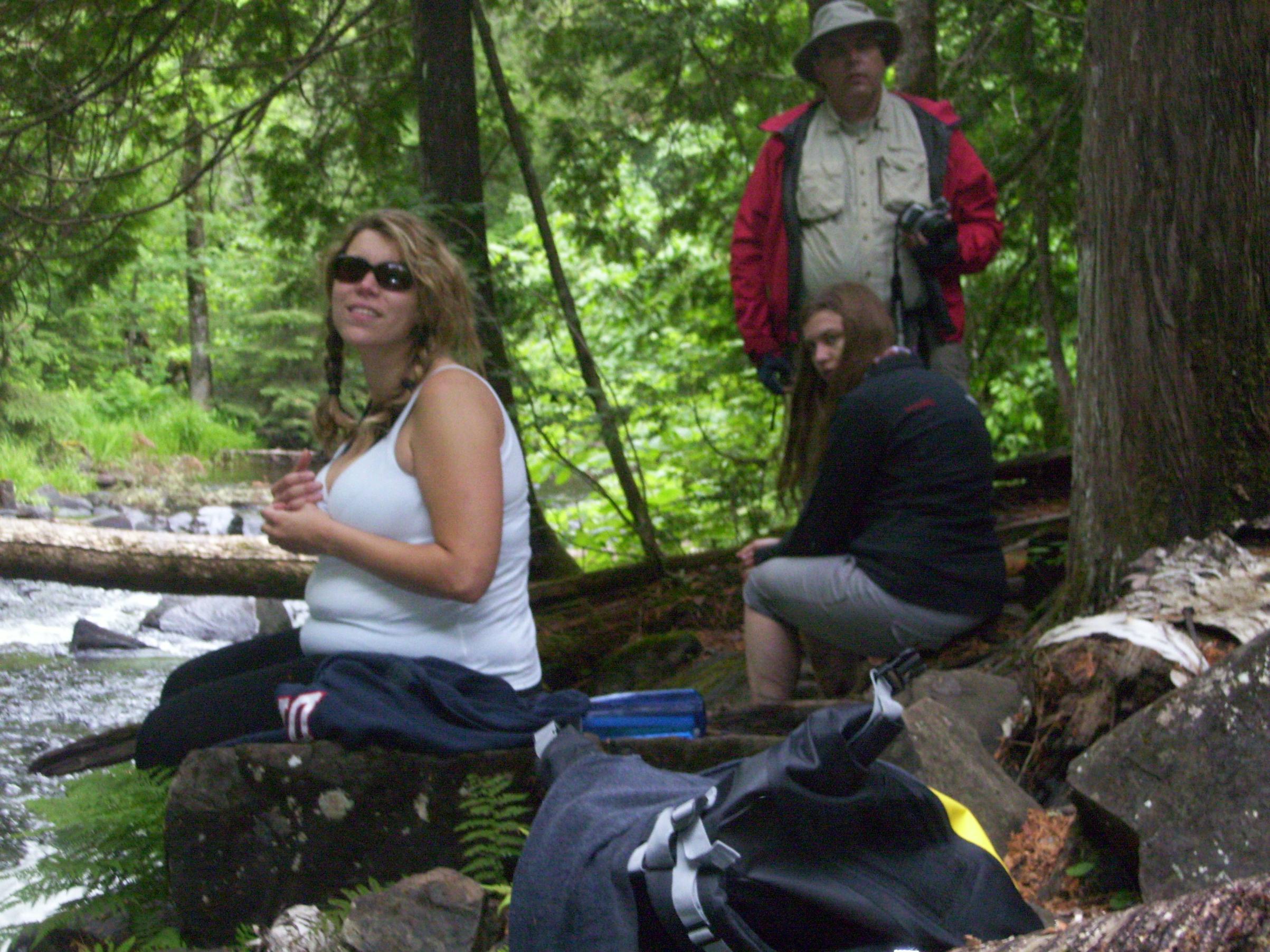 The return trip was a little more difficult. We were tired and the wind picked up. The return trip on Alder was into a head wind. A couple times the wind caught the canoe just right (or wrong) and I thought we were going in. We stayed dry and kept pushing. By the time we reached E. Bearskin I was ready to call it a day. We even discussed the two kayaks going back to the lodge and getting a tow. We encouraged each other to continue to push it. My son and I were in the canoe and we made a good team. A couple times the wind pushed us 180 degrees. When we finished we were proud of ourselves. 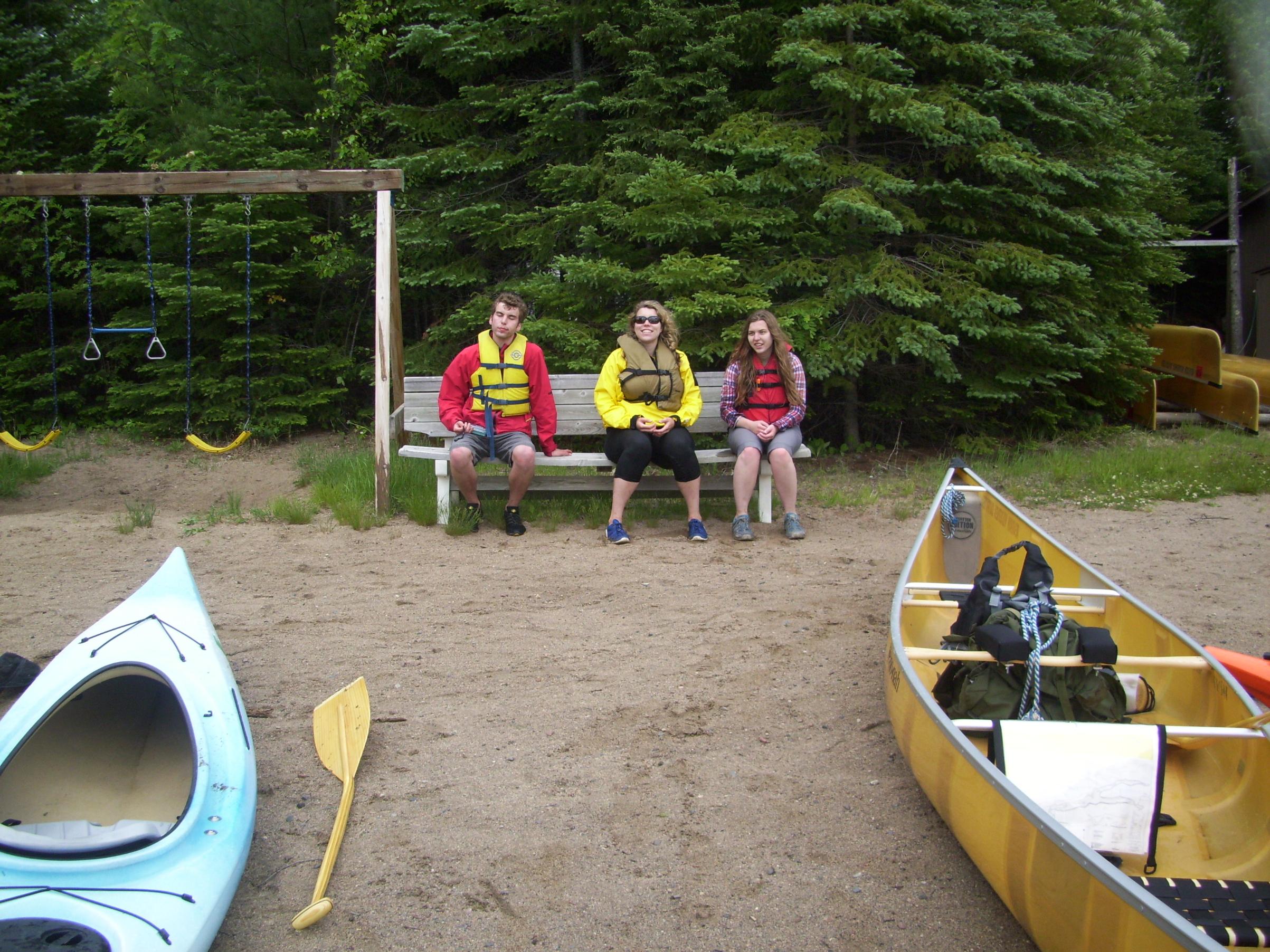 We were there early June so bugs were not bad. A few at the start of each portage but nothing for us. My youngest was bit a few times on her face (she is always bit). Could have been avoided with some bug spray at the beginning.

I had two regrets for the day. First I carried my DSLR in an old ammo can to keep it water tight. Didn't take it out at any time to take pictures except at the falls. My son brought his point and shoot in a pelican case and had it out all the time taking pictures. I should have done the same thing. Not push so hard and take more pictures. The second, I should have planned to make this an overnight trip. We were exhausted fighting the wind. If the weather would have cooperated, would have been a bit more enjoyable. But still a long day.