This is to be a trip for me, my two daughters, my dad, and his friend Donny. The girls started calling him Dondoe, and I’m sure it made his trip that much better. My dad has been going to the BWCA for about 15 years, every year, and Donny has been going for over 30 years. We will be staying in the campground at McFarland Lake at the end of the Arrowhead Trail.

We started off making the drive from Wisconsin Rapids to Grand Marais at 10:30PM on Tuesday the 3rd. I wanted to start the drive at this time for a couple reasons. First, that would put us in Grand Marais about 6AM just in time for breakfast and last minute items like leeches to purchase. And Secondly, so that the girls would sleep most of the trip since it is quite a drive. The drive is to be about 410 miles one way from door to campground. As it worked out, the times were very well thought out. WE arrived in GM about 5:45 and when we finished breakfast at “South of the Border”, it was 6:30 and Bucks hardware store was open for business.

My youngest daughter, Alex, slept most of the way. She did get up when we stopped in Spooner for gas, potty break, and a snack (lunchable). My oldest girl, Faith, is one of those sociable people that love to know everything that goes on. If we were talking about something or telling stories, it seemed like she was awake and listening, lol. I love that about her, I see my wife in her so much and always brings a smile to my face.

After breakfast and our last minute purchases, we headed up the Arrowhead trail to the campground. We checked out where we wanted to camp and choose an open spot near the bathrooms that had room for our overpacking, lol. We set up two large tents, two screen tents, an awning in case it rains and to keep the sun off the never ending supply of coolers. There is a nice firepit there which we used every night for a campfire. Once camp was set up, we got the canoes ready to go out fishing. Here is where the preparations change with having the kids. I needed to have and carry ALL the poles, tackle, snacks, drinks, warm clothes, cool clothes, rain coats, and a couple other things. Did I mind? Not a bit, I loved having the kids there and I had already figured this was their trip and not mine.

WE headed out through Little John and into John lake into the wind the whole time. Faith was up front and paddled great, Alex (all 33 #’s of her) was in the center and into the snacks 10 minutes after shoving off. I realized in John Lake that I did not have enough weight up front. We ended up backwards on quite a few occasions. WE stopped by the first campsite in John so the girls could do some exploring. Meanwhile, I unpacked the rods and got ready to fish a little from shore. The wind was right at us and I could almost cast out 20 feet, which did not get past the rocks at shore. I got the girls to get back in the canoe (SR Q17) and we started into the wind again attempting to drag a crawler harness. We got spun around again a couple times and I resorted to hugging the shore for a while. Then we shot out into the lake until the depth read 8-10’ and I threw down a bag or rocks anchor. WE fished for a couple hours, dragging and drifting, until we decided to head back to camp. Somehow the wind shifted and we ere once again heading into the wind through Little John. At the bridge I saw a nice smallie swim past, so I fished a little. I caught one nice one and lost it while getting out the stringer. Then Faith,who was wading in the rocks with me, pointed out another nice fish. I tried to cast over to it and missed by 8’ with the wind, but as soon as the lure hit the water I had a fish on! I got that one in the boat and on the stringer about the time my dad and Donny were coming back off John with a nice stringer of Walleyes. WE got back to camp, cooked up a nice fish dinner and relaxed the rest of the day since it looked like storms. Storms never came and it cleared up nice so we had a fire and made some memories! Little John Lake, John Lake 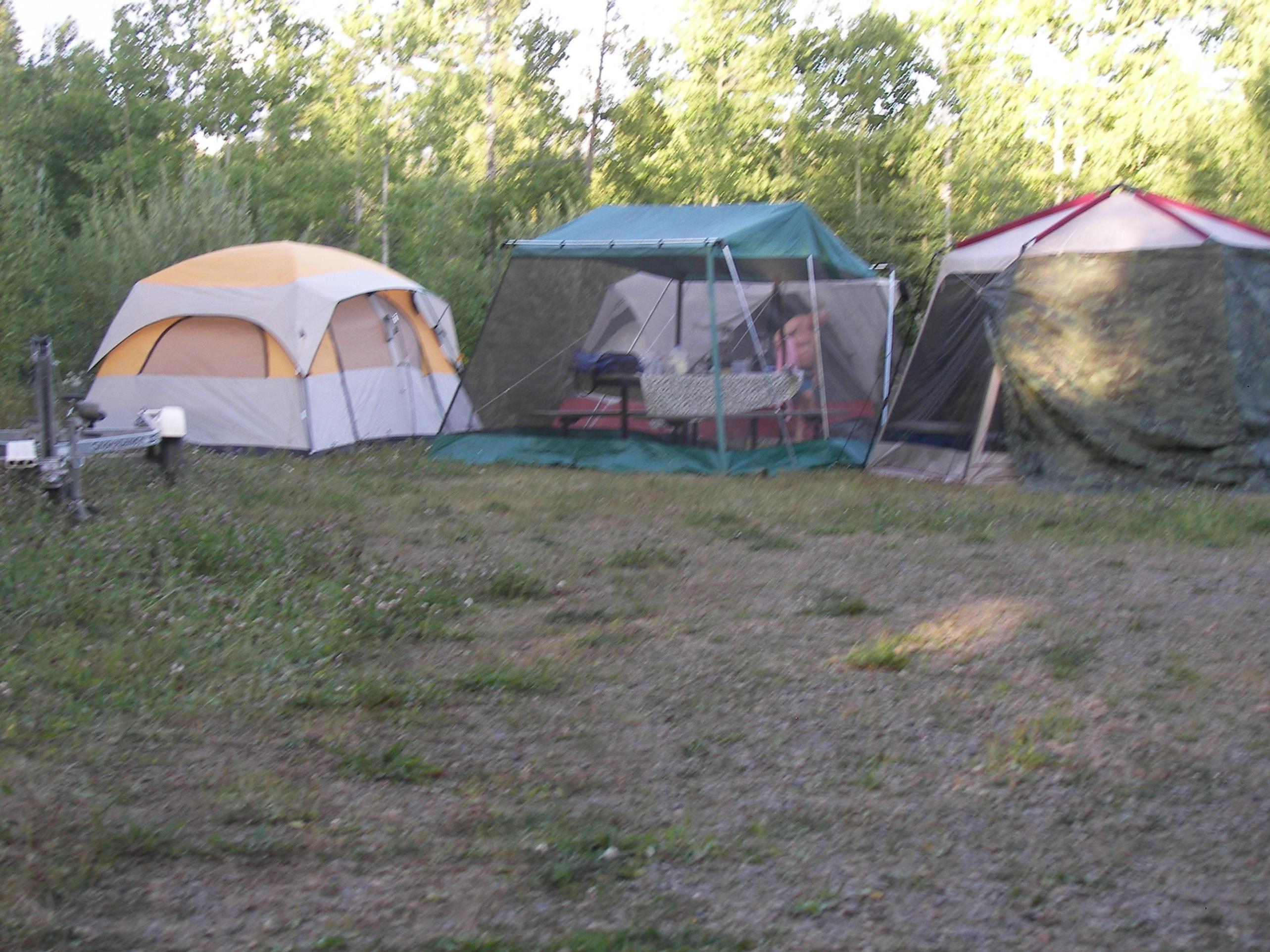