Me, Three Blonds and a Mom
by floatstanley

Trip Type: Paddling Canoe
Entry Date: 08/12/2010
Entry & Exit Point: Bower Trout Lake (EP 43)
Number of Days: 6
Group Size: 5
Trip Introduction:
I can't believe it, another all girl trip. I wasn't sure if I could take it but this trip was different. I was passed on to this woman in a Walgreens parking lot and got to sit in the front seat...nice compared to a trunk! When we got to this lady's house (I'm just going to call her Mom, since that is what everyone else was calling her), two blond girls that looked alike grabbed me and were checking me out. Every PFD's dream. Twin blonds...Hmmmmm : ) I think they were a bit young for me though(How old am I anyway?). I was placed in a chair in Mom's bedroom until the next morning when back in the car I went, back seat this time. When the car came to a stop the door opened and another blond girl, a bit older jumped in and said, "Did you get him?" Mom pointed to the backseat and the girl picked me up and sat me on her lap, and looked me over. Three Blonds and a Mom taking me, the redheaded PFD, on my next adventure.
Discuss Trip: View Discussion Thread (18 messages)
Report
I'm going to start this off by naming the girls Blond 1, 2, and 3 or B1, B2, and B3, it will just be easier that way.

The night before we left, Mom and the B's were packing the bags. But the big pack didn't feel real comfortable to B1, so Mom said, "I'll fix that!" and shoved me in between the pack and the buckets. "There, FS has got your back!" B1 smiled and said, "Oh much better". I had mixed emotions about this. It meant I wouldn't see much, but on the other hand I wouldn't get sweat on or worse yet gassed on either. So it was cool...I guess. Feeling like a hitchhiker I didn't want to complain.

It was departure day..oof..the pack I was in dropped into the trunk. I would stay there until they started paddling the next day. On the long ride up to Grand Marais, I met my new PFD friends. Their names were Blazin' Pockets, Little Red, Big Red and Violet. I couldn't see them, just hear them, so I told them my story and they told me theirs. They also gave me a little heads up about this group we were tripping with.

After what seemed like days I heard the pop of the trunk latch. The B's started taking everything out and setting it on the ground, while Mom organized the packs. 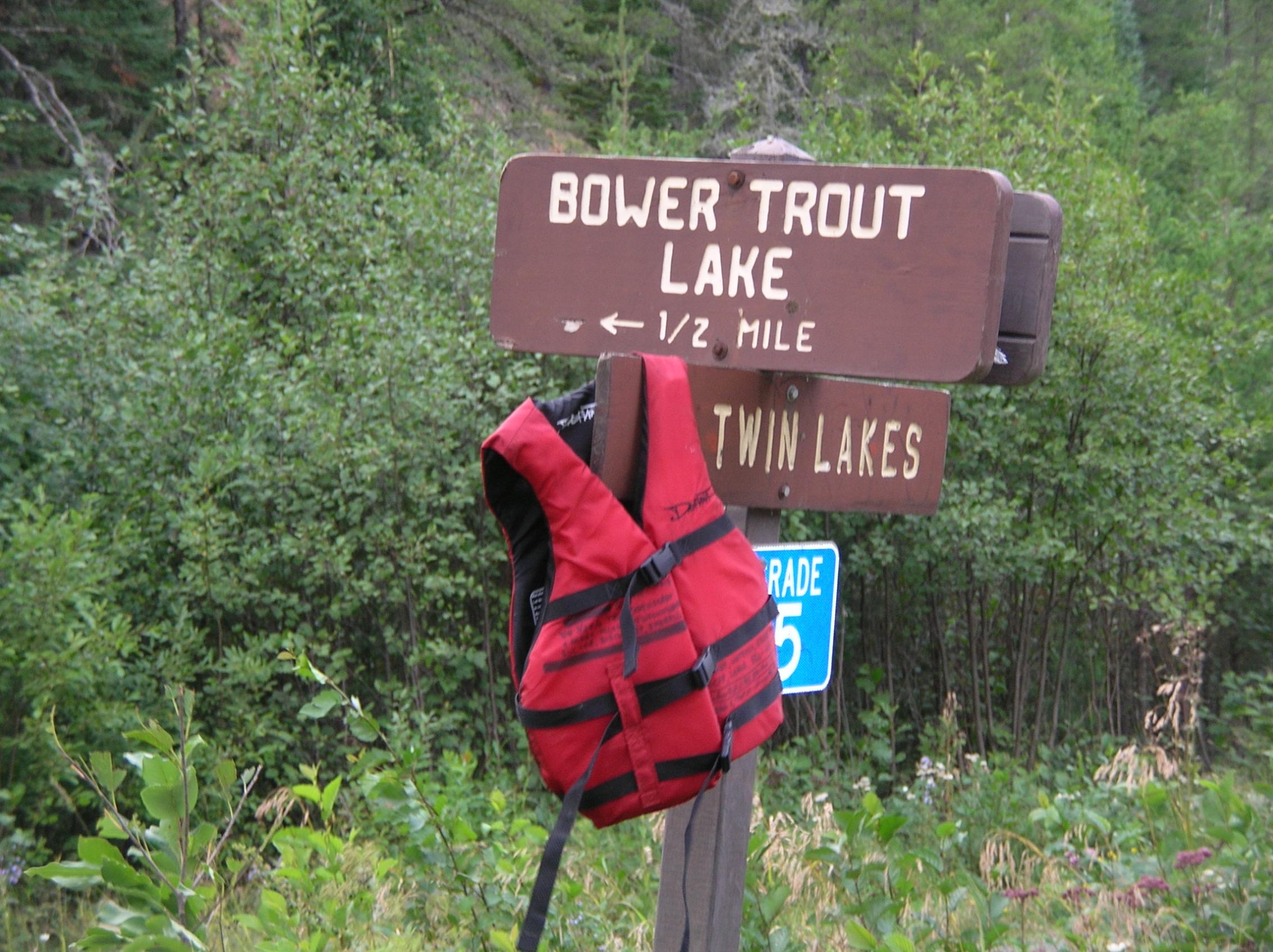 B1 got to carry the pack I was in that was named 'The Beast'. Mom grabbed a canoe, B2 carried the food pack, B3 took 'Red', the other pack, and off we went. My buddies and I were left by the lake while Mom and the B's went to get the rest of the gear and the last canoe. After waiting a while I heard them coming. It sounded like Mom had another canoe, B1 had the 'Blue Bertha' pack and B2 and B3 had water bottles and paddles. This was the routine through six portages until finally the last pack was dropped at the campsite. I was grateful to be laid in the cool bottom of the canoe in between portages. I think it help keep the swelling down from the bruises I was acquiring from being dropped on rocks.

The days all seemed to run together once we were in camp. I spent most of my time hangin' around watching the Mom and the B's do the routine things people do when they are in the BW. 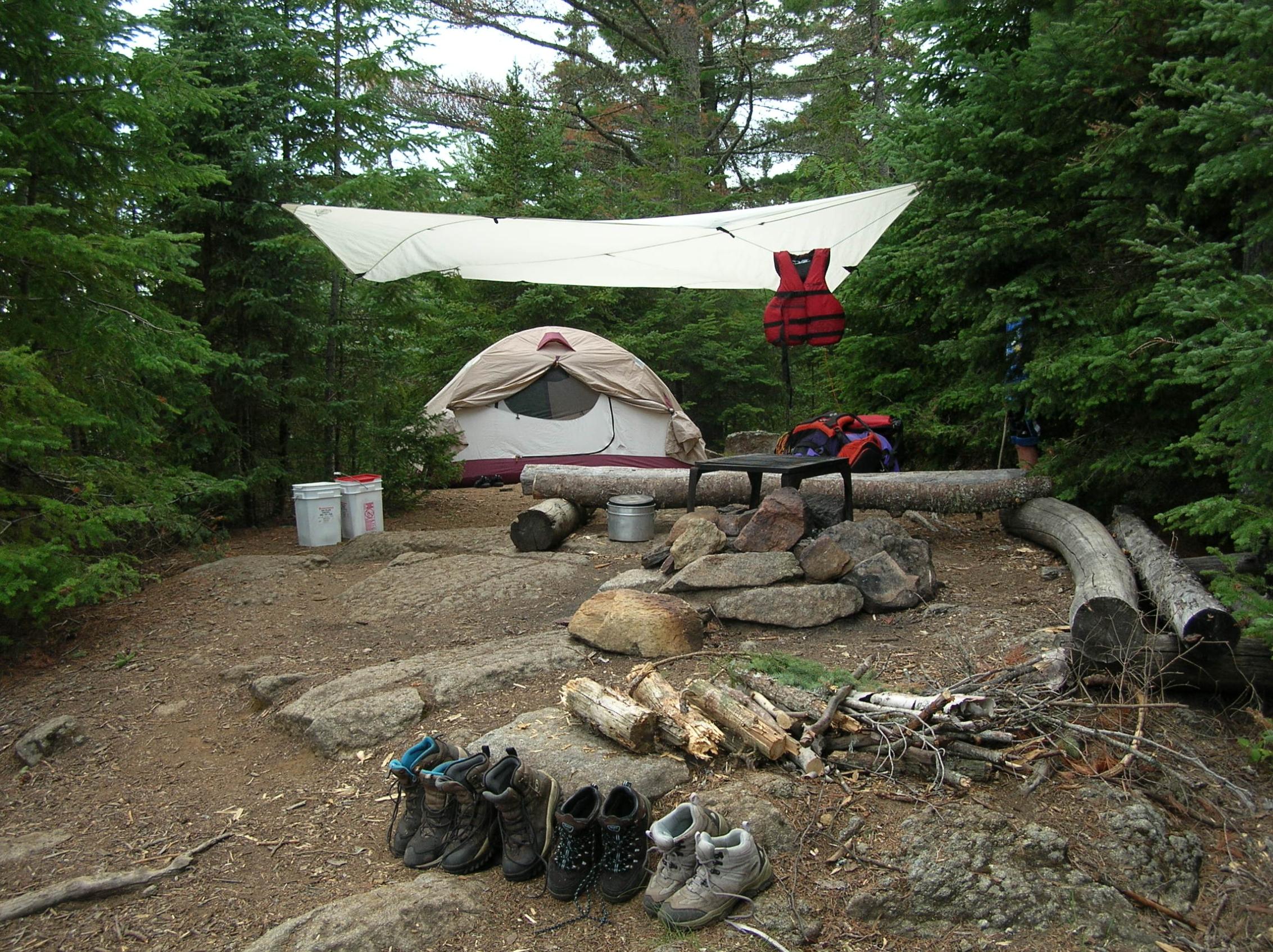 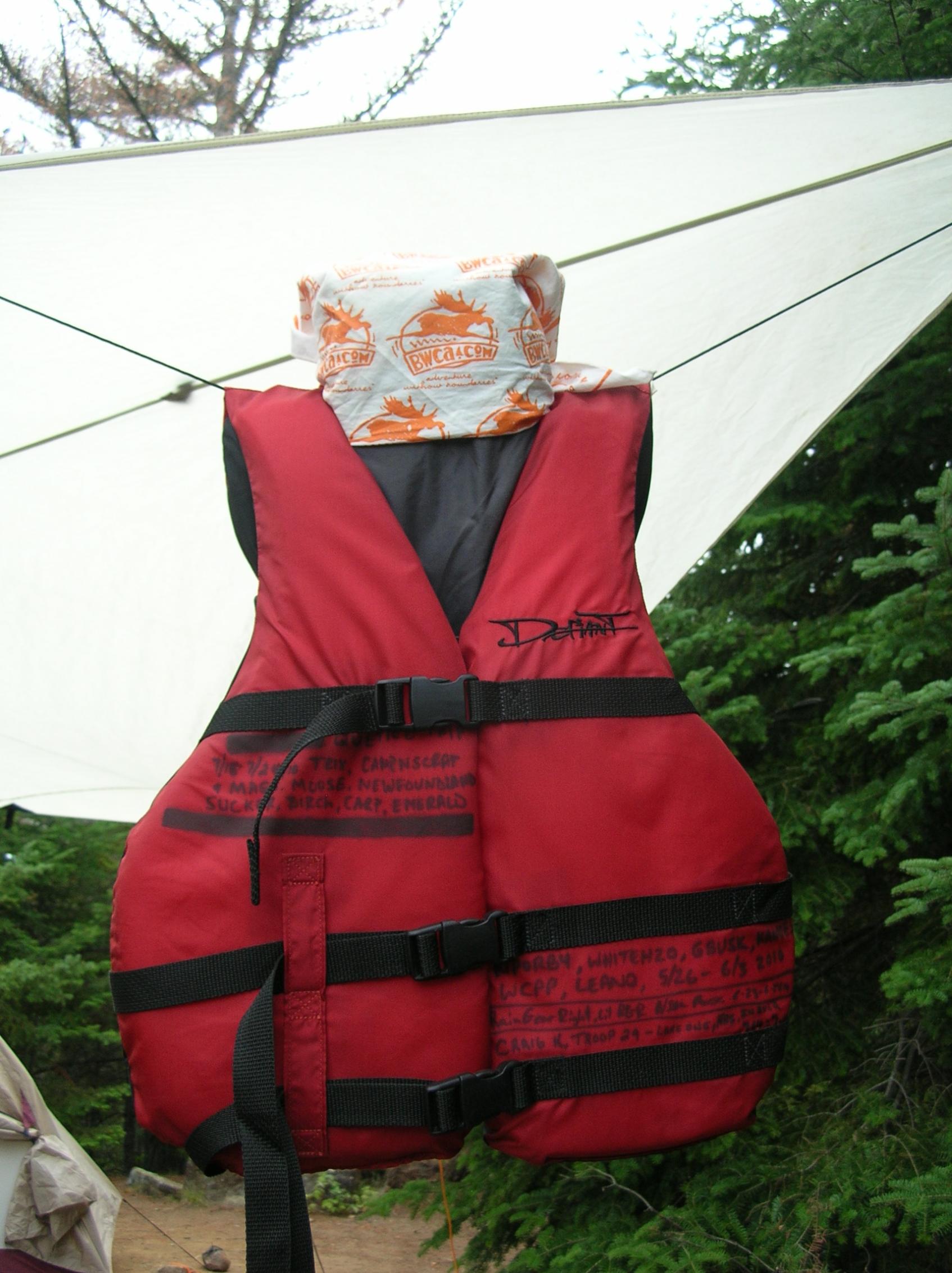 Every so often the ladies would grab me, dress me up and I actually would have a body. The funny thing was I felt soooo much like a human, I could swear I was one of them. This must have been what my PFD friends were warning me about in the trunk. I remember them saying "You just never know what this group will come up with next". By the way, I finally got to see them but can't seem to keep Little Red and Big Red straight, Blazin' Pockets and Violet have much more distinct features. I kept hearing Mom say, "When you are wind bound you need to make your own fun."

My first human experience was on the "man can". They put me on this big plastic box and peeee-ewww, that smell...it seemed somewhat familiar, kinda like the odor I smelled on a few previous BW trips. 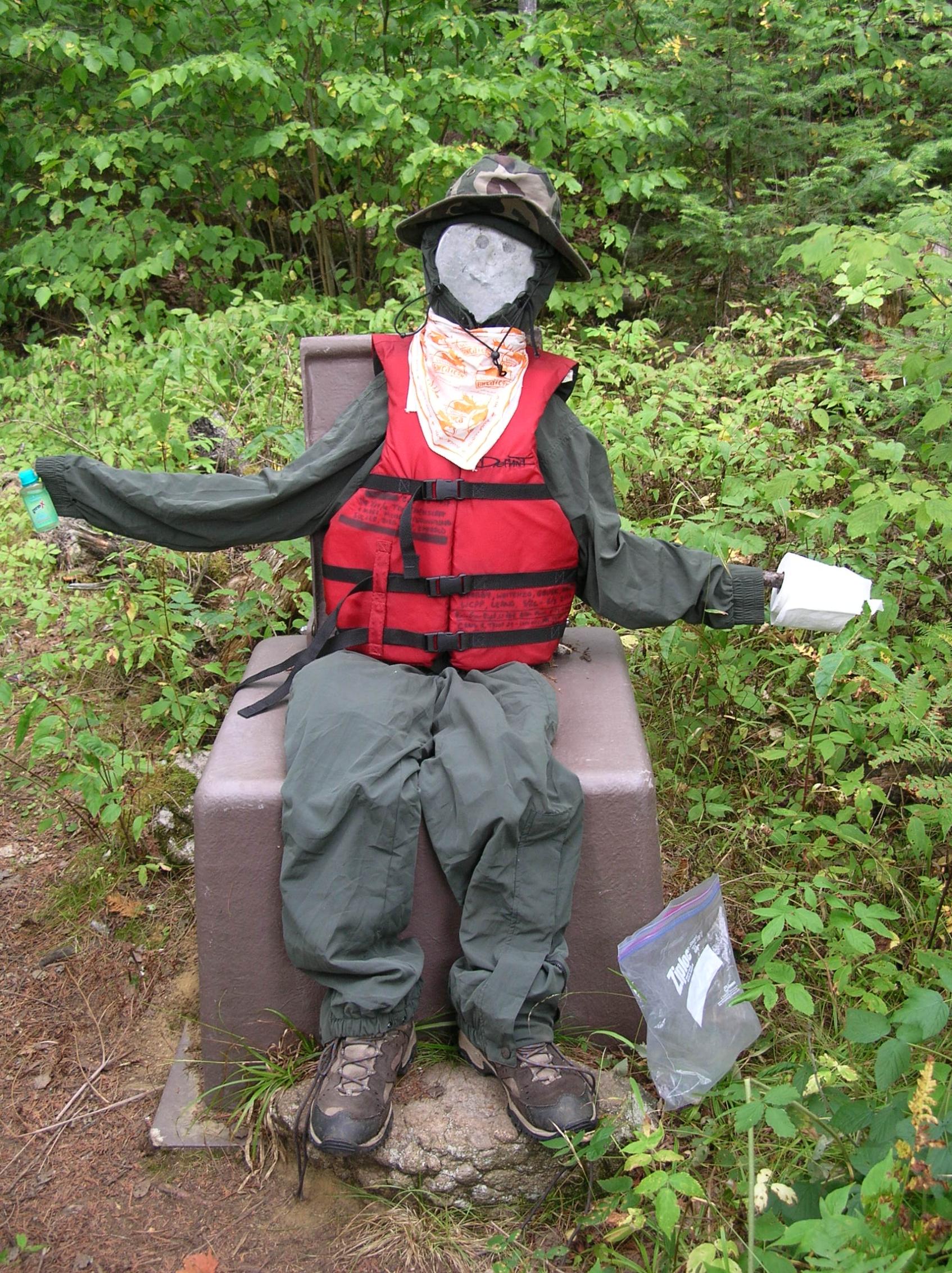 We played hide and seek. See me hiding behind the big tree root? 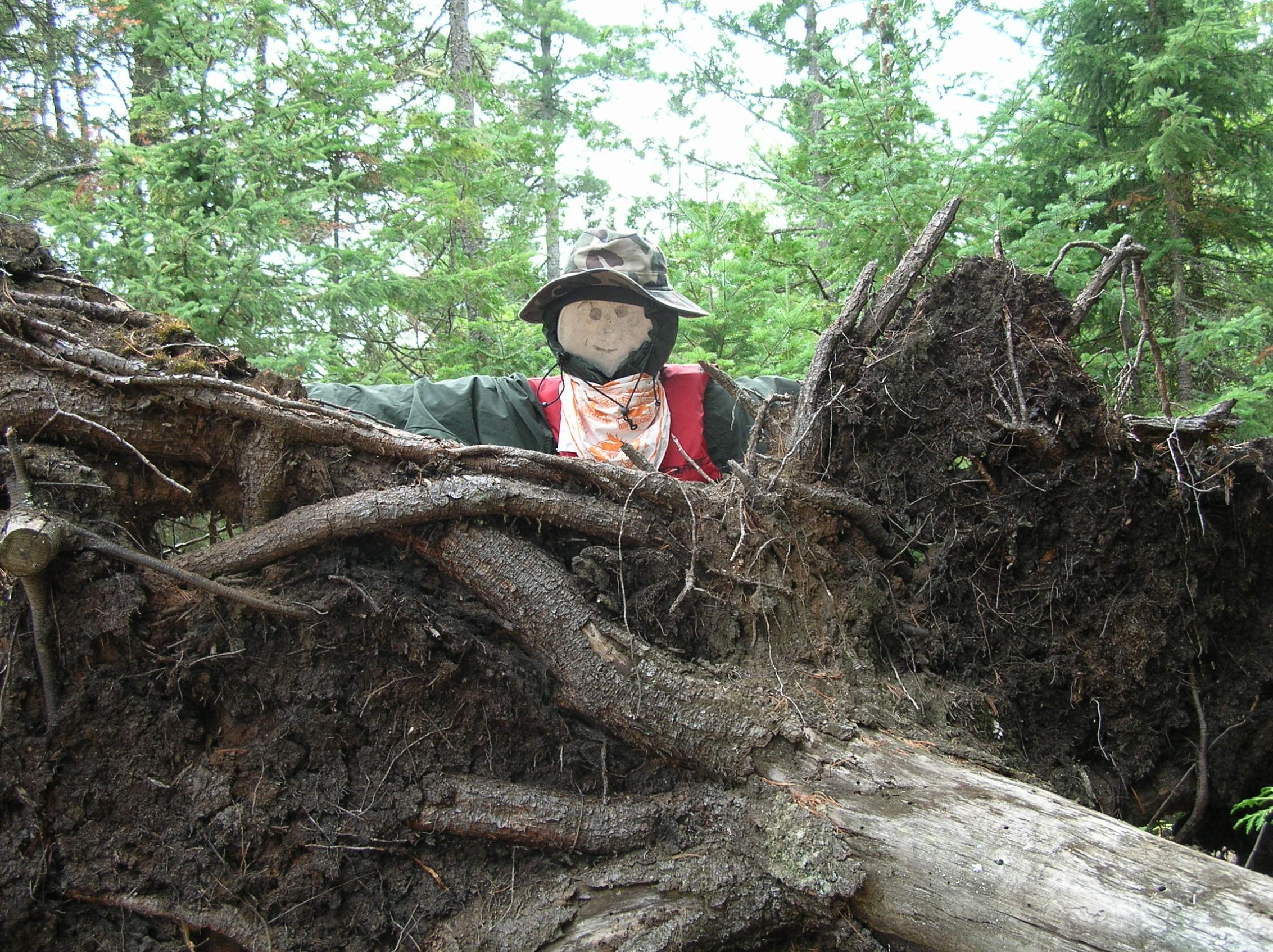 At times I just got to relax, 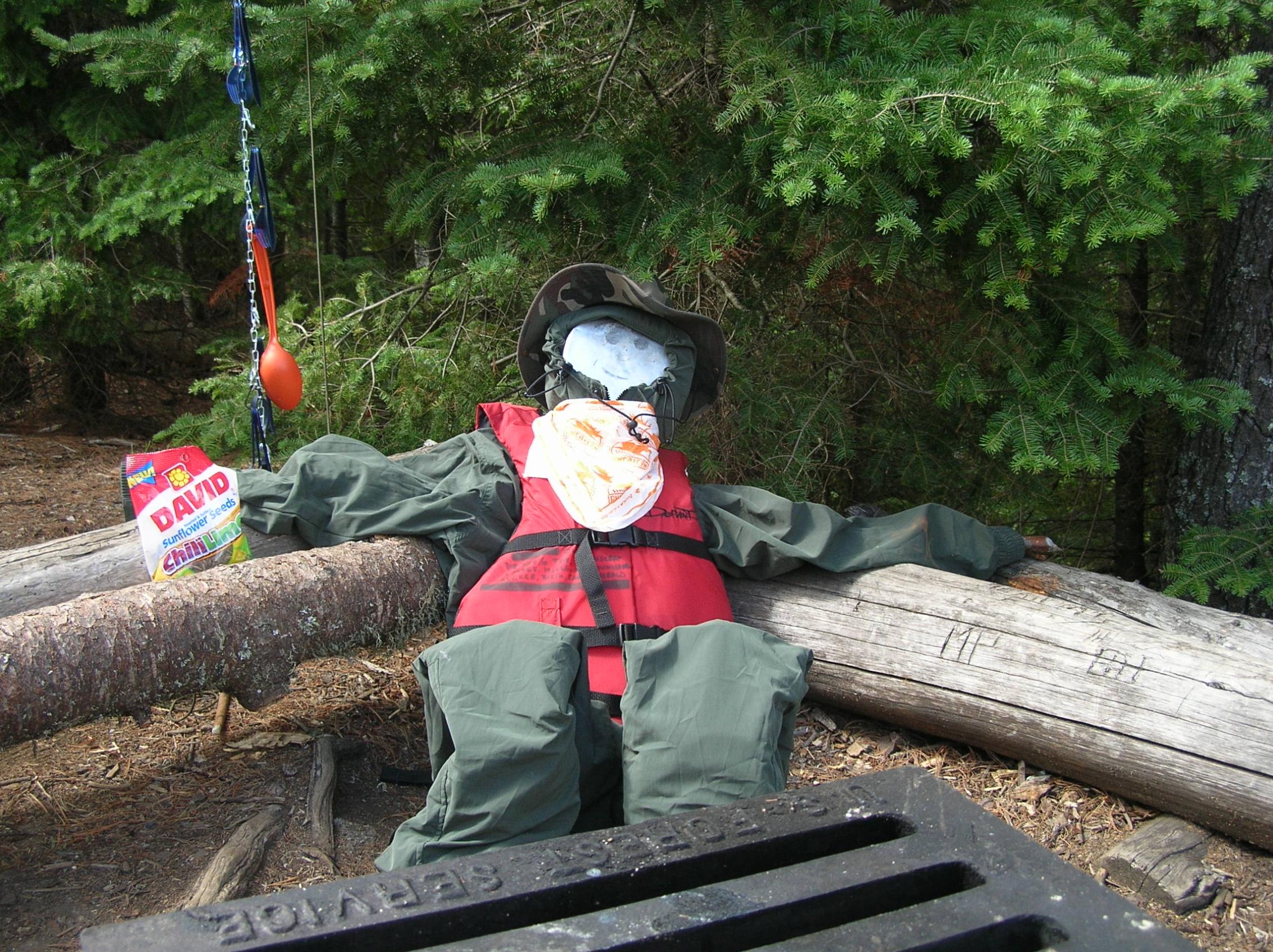 but sometimes they made me work and carry packs until I collapsed. 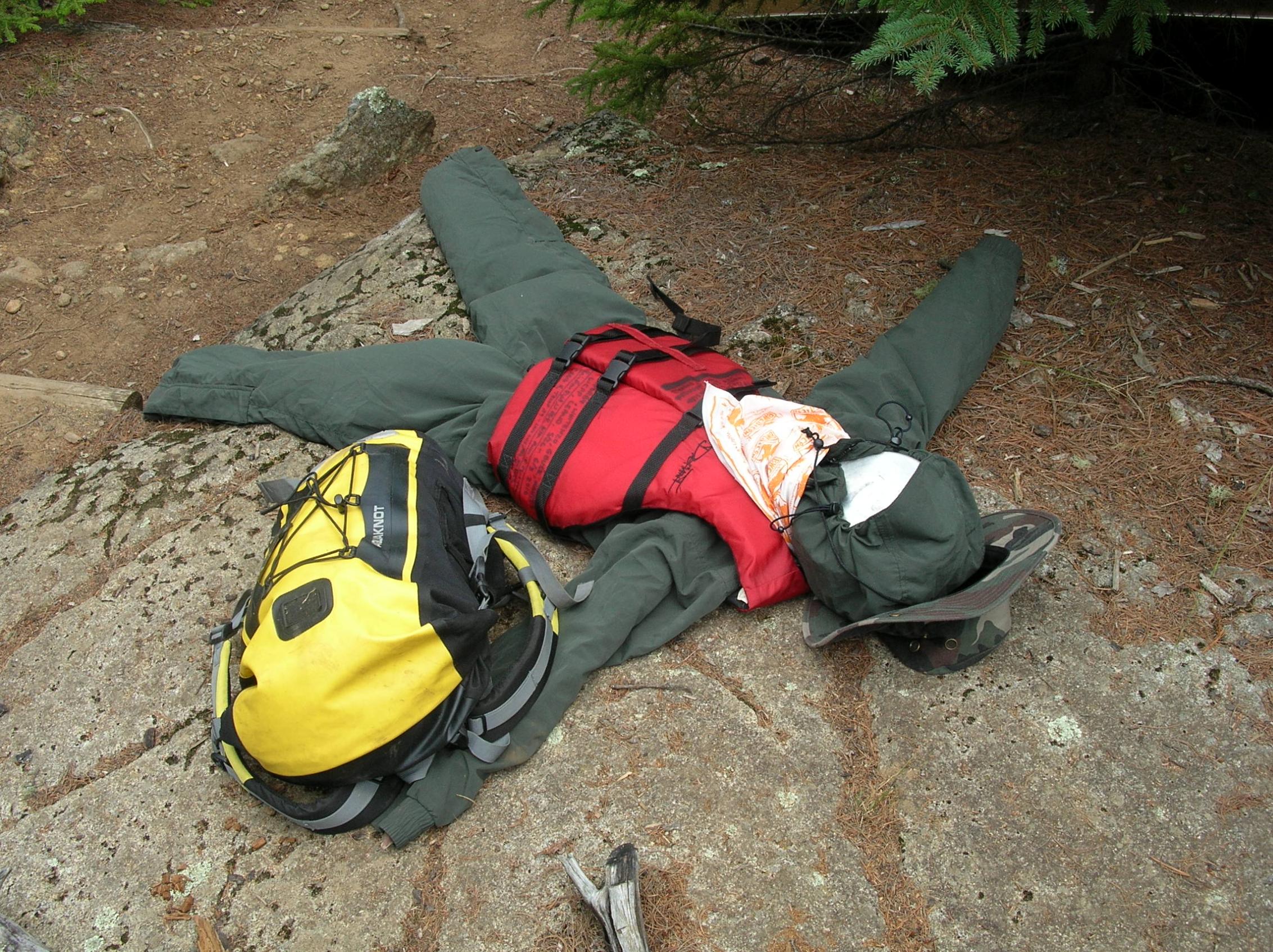 I loved fishing with my little buddy B2. She has more patience than me, and man can she cast a lure! 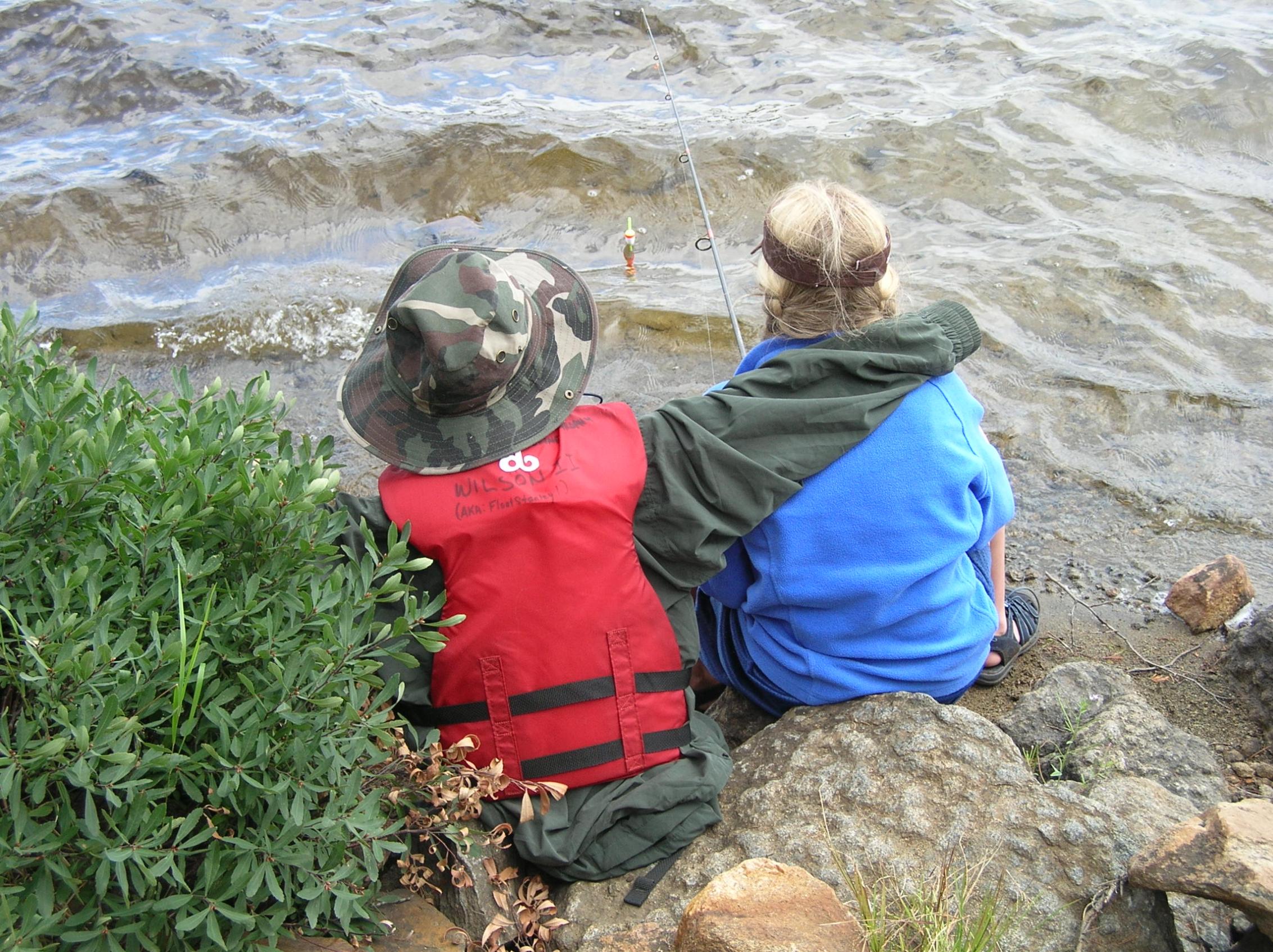 One day I heard all this giggling from the tent, but then it got quiet. I was curious so I got under the rain fly and peeked in. I think the B's wore themselves out laughing and needed a nap. 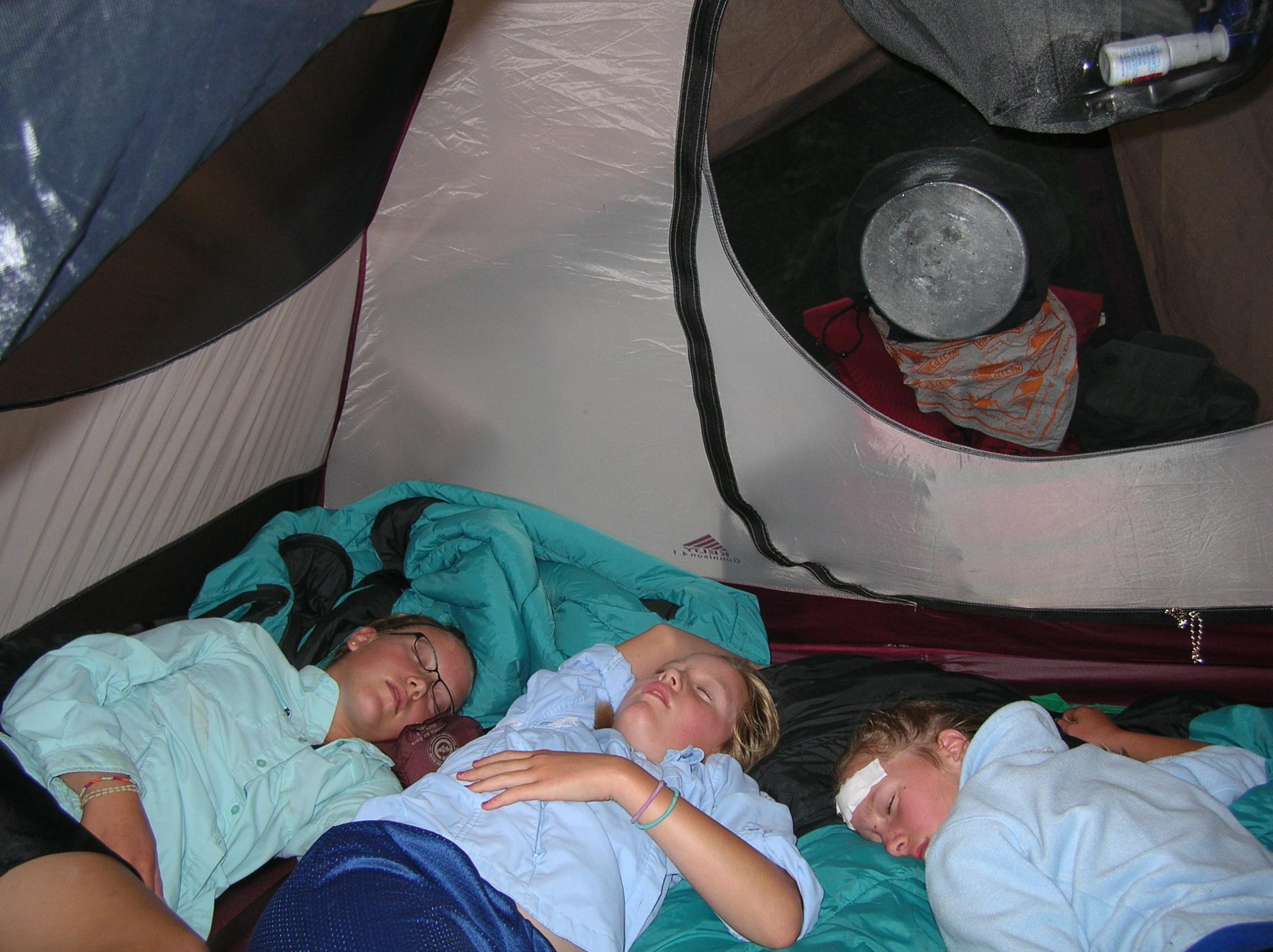 B3 is like a monkey and insisted I climb a tree with her. She helped me up, but once I was up, I held on for dear life. If I would have fallen and put a dent in Mom's pot they were using for my face, oh boy, I don't know how she would have liked that! 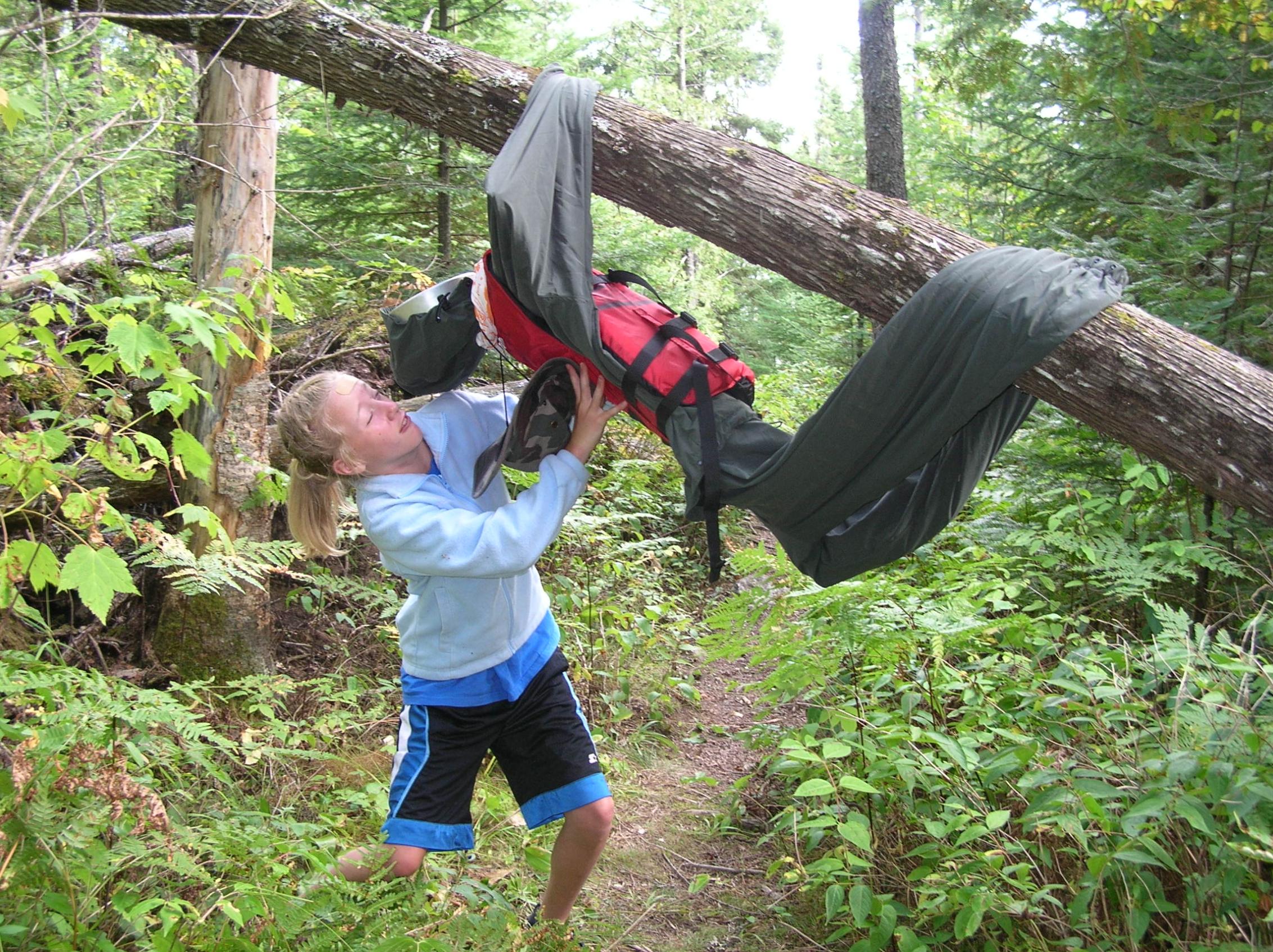 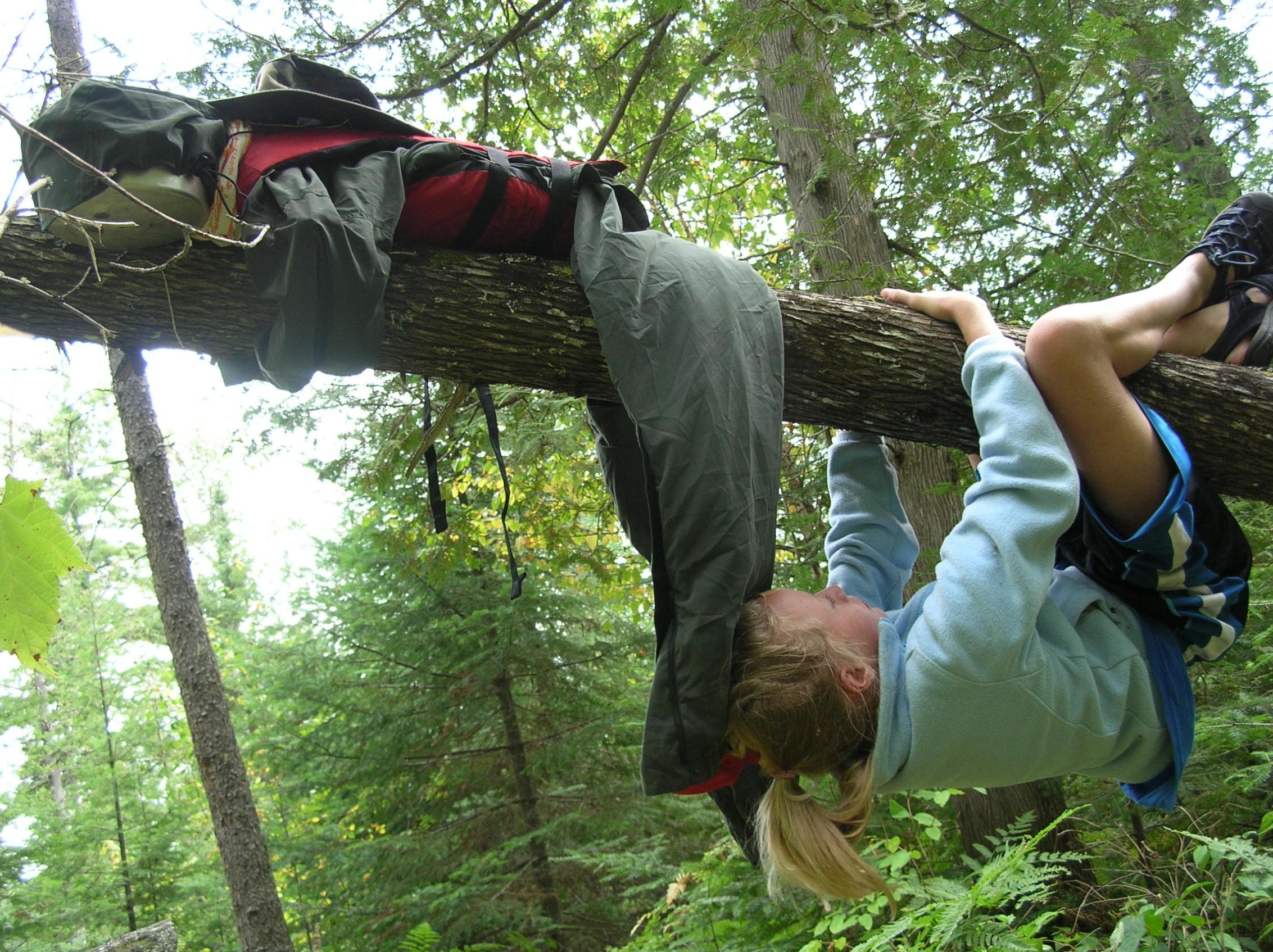 I got my own pink water bottle because "real life jackets" are okay with pink. 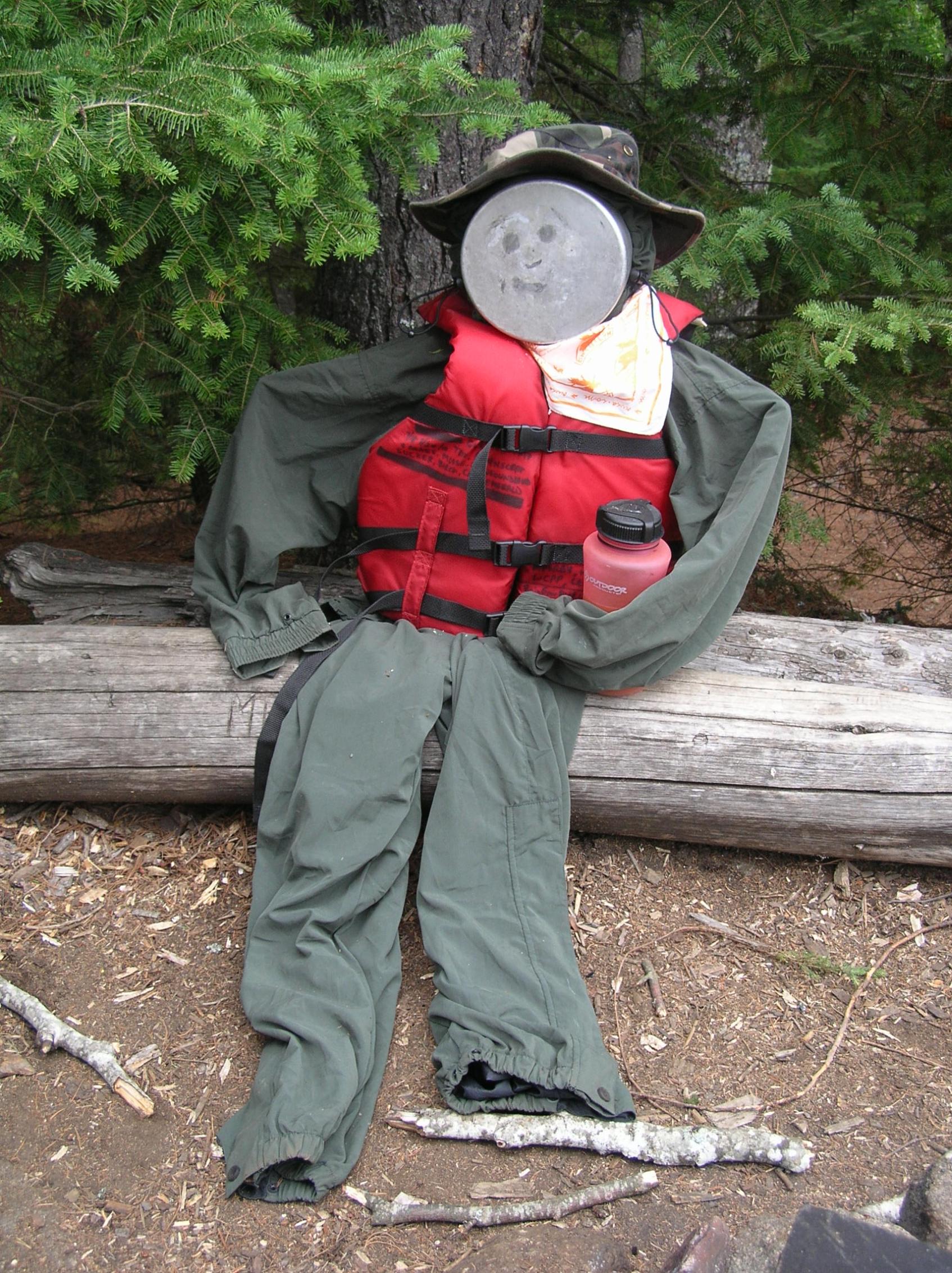 I'm not sure what was in that pink water bottle but I seemed a bit tipsy here in this fire picture. Actually, it was probably the wind blowing me over! 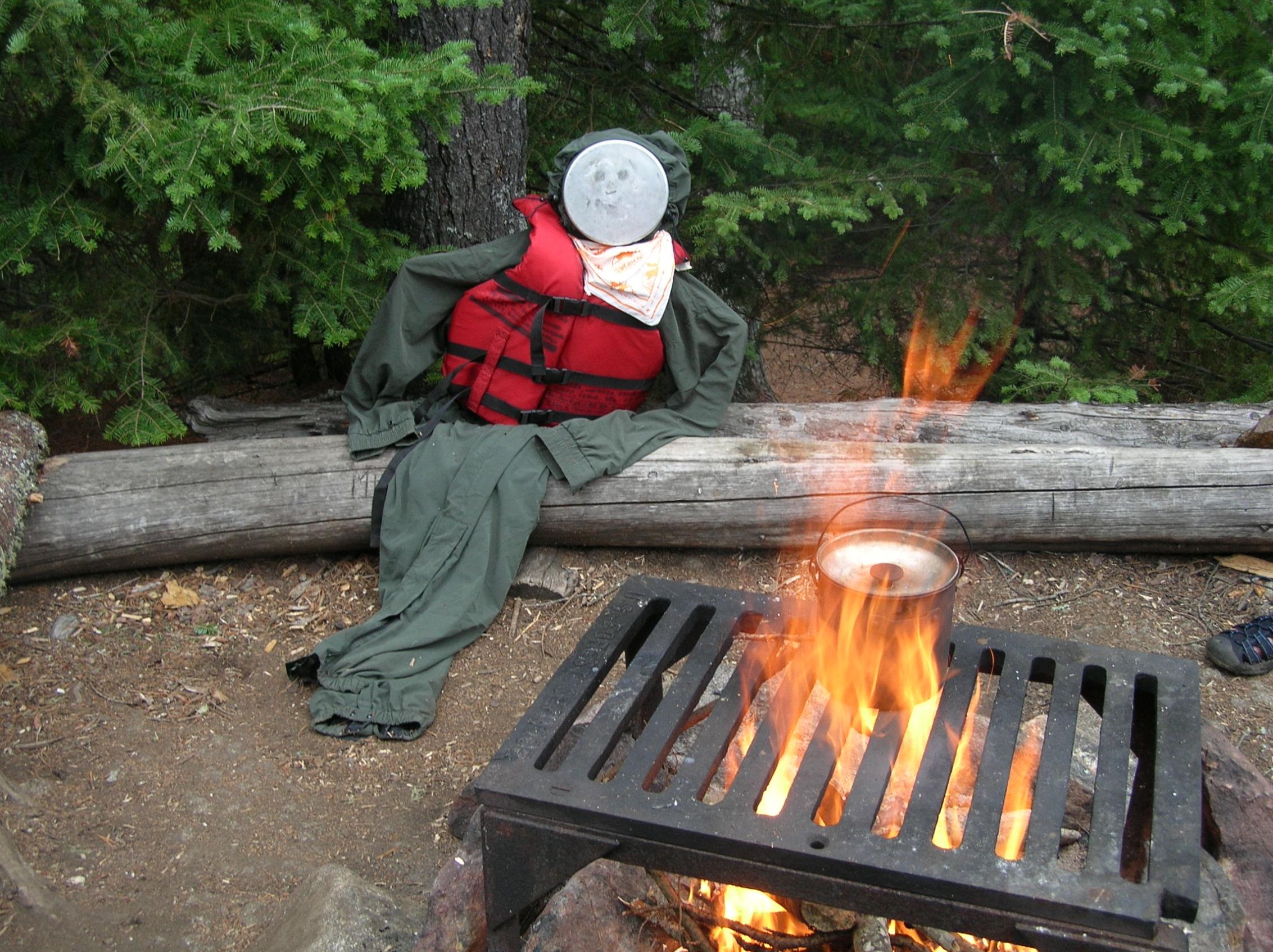 The B's talked to me like I really mattered to them and the one question they had asked was, "How did you get started on this journey, 'floating' around through out the wilderness with so many different people?" So I told them to pull up a log and I'd tell them. I started in ......."once upon a time, bright and early 4 guys walk into the store,"...and so the story was told. The B's are good listeners! 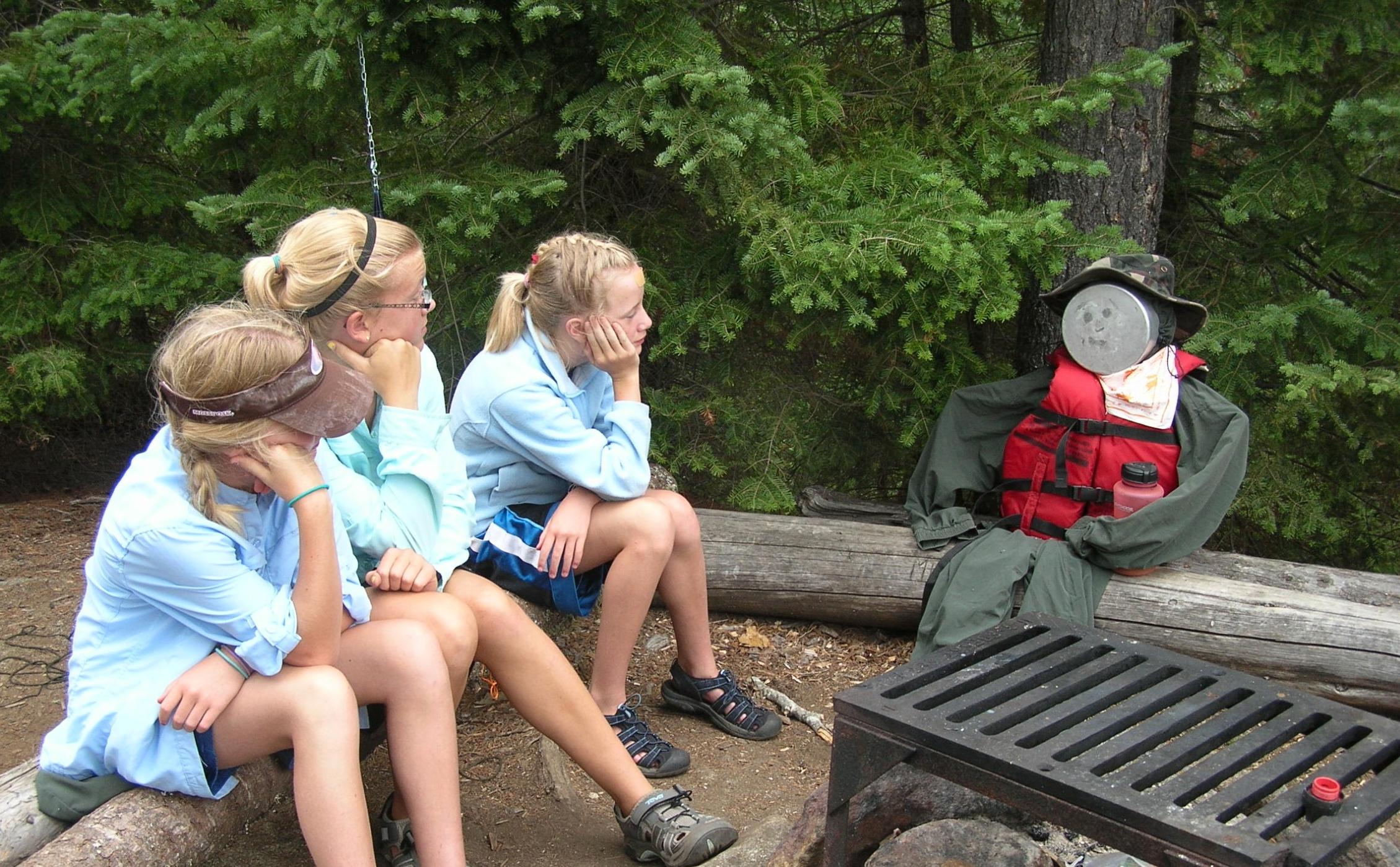 One day it started to rain and before I knew it I was being pulled apart. I didn't know why until I heard Mom say, "He's wearing my rain gear." So I went back to just plain old me the PFD. That was okay though, because my friends were starting to make fun of me and kept saying "We warned you!" 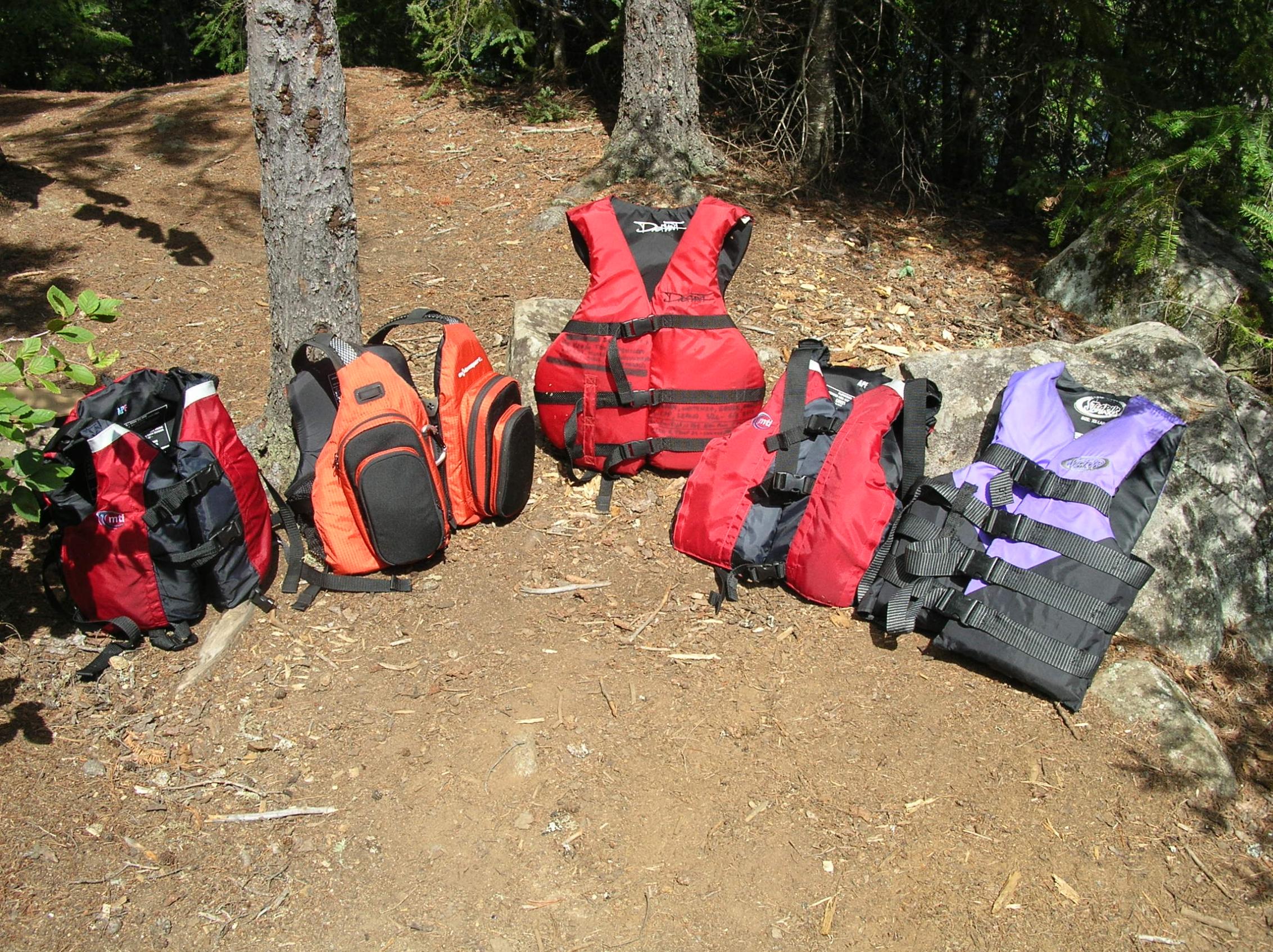 This is the gang of PFD's I met in the trunk. What a great bunch to 'float' around with!

One time, I had been down by the lake watching the B's skipping rocks (and trying to do the impossible, throw a rock with their left hand...now that was funny!), B1 said, "Hey 'float' lets go swimming." The water felt good, but when we got out of the water we were chilly from the wind. Yes, the wind was still blowing. 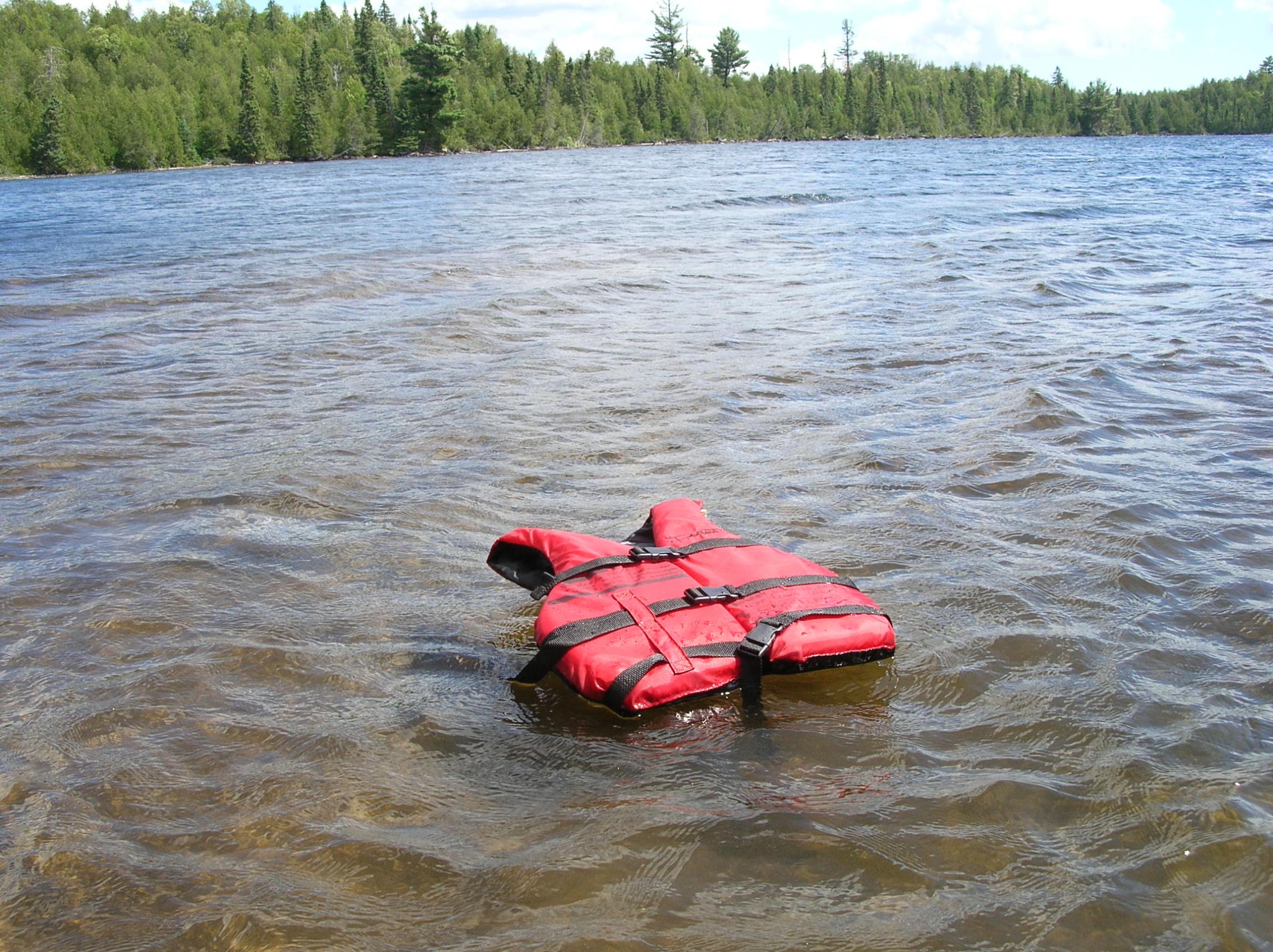 The day came when Mom sat me down and said, "Float, I'm so happy that you were with on this trip to entertain the girls." She did admit she had fun and liked me too, but the trip was coming to an end and we were to leave in the morning. 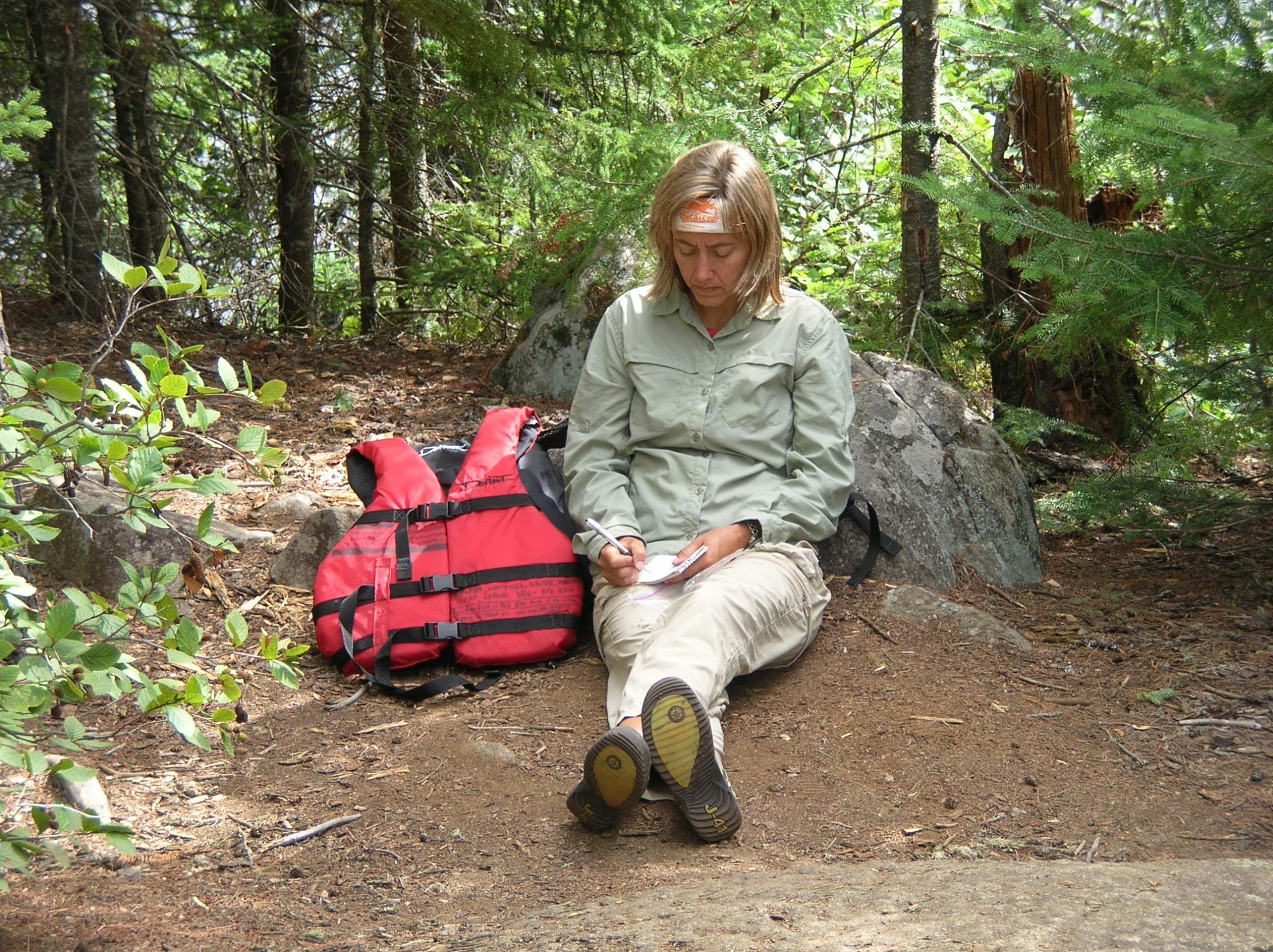 So that night I got stuffed back in 'The Beast'. The next morning we were on the water early and by 7 a.m. I could hear Mom and the B's complaining about "this darn wind". I couldn't see out of the pack but when the wind was at our back it felt like we were flying. At one point I could hear everyone yelling, "Paddle! Turn!" "A rock! No, the other one!" "Dig in!" "Push off!" "Another rock!". This went on for a while and then the cheering started. We made it through, whoo-hoo! All I know is I was glad to be safe in a pack.

Back at the car Mom pulled me out and let me ride loose in the trunk with my friends. 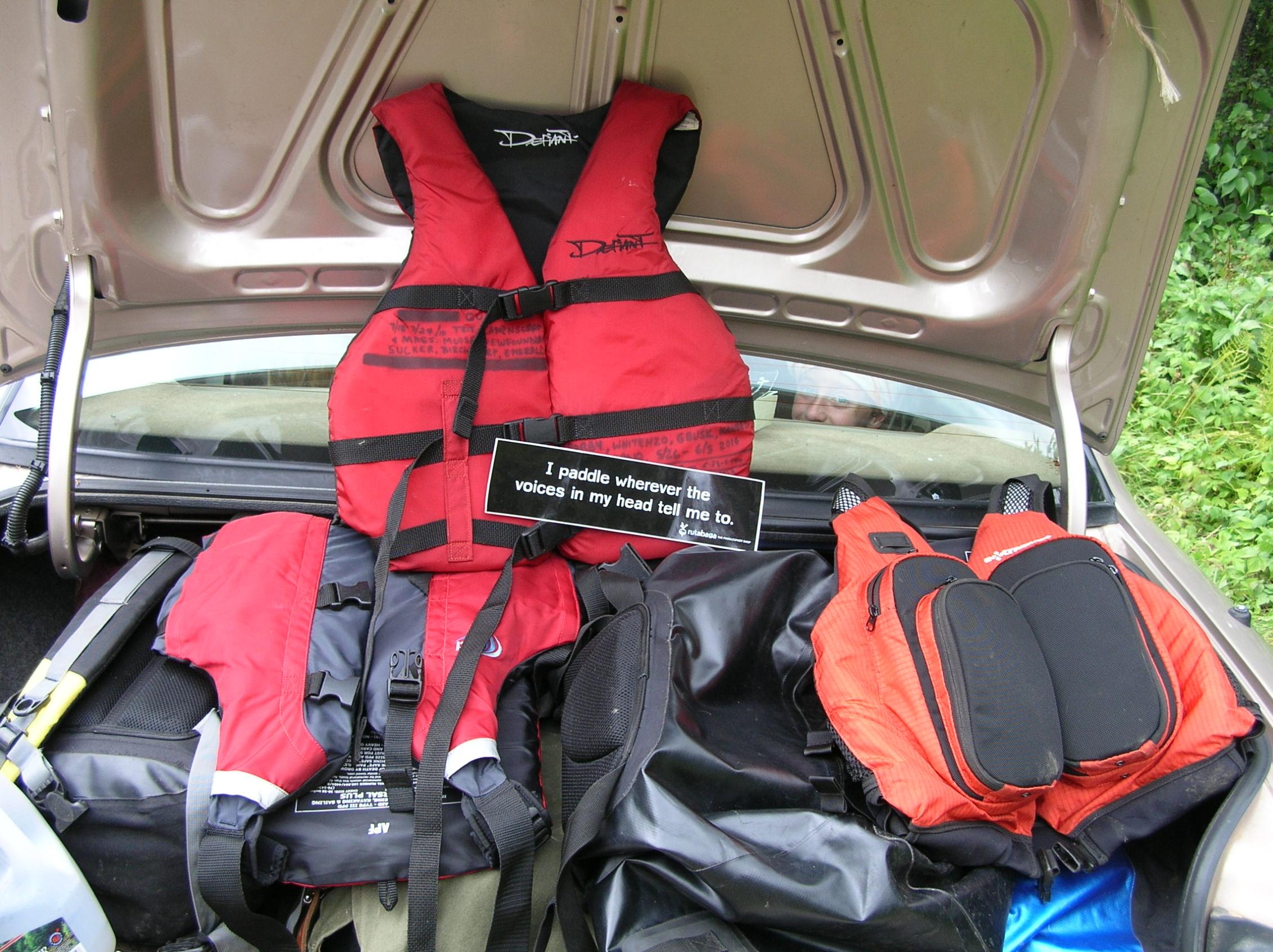 After sometime I heard the pop of the trunk. Ahhhh...we are home...I thought. No! Where are we? I guess were looking at Lake Superior. You should have seen the guy at the rest area give Mom the look when she was walking toward that massive lake with me, a life jacket. It was that "What the h*@# are you going to do lady, swim??" look. I knew Mom just wanted one more picture of her 'handsome redhead' before someone stole me away from Mom and The Three Blonds. 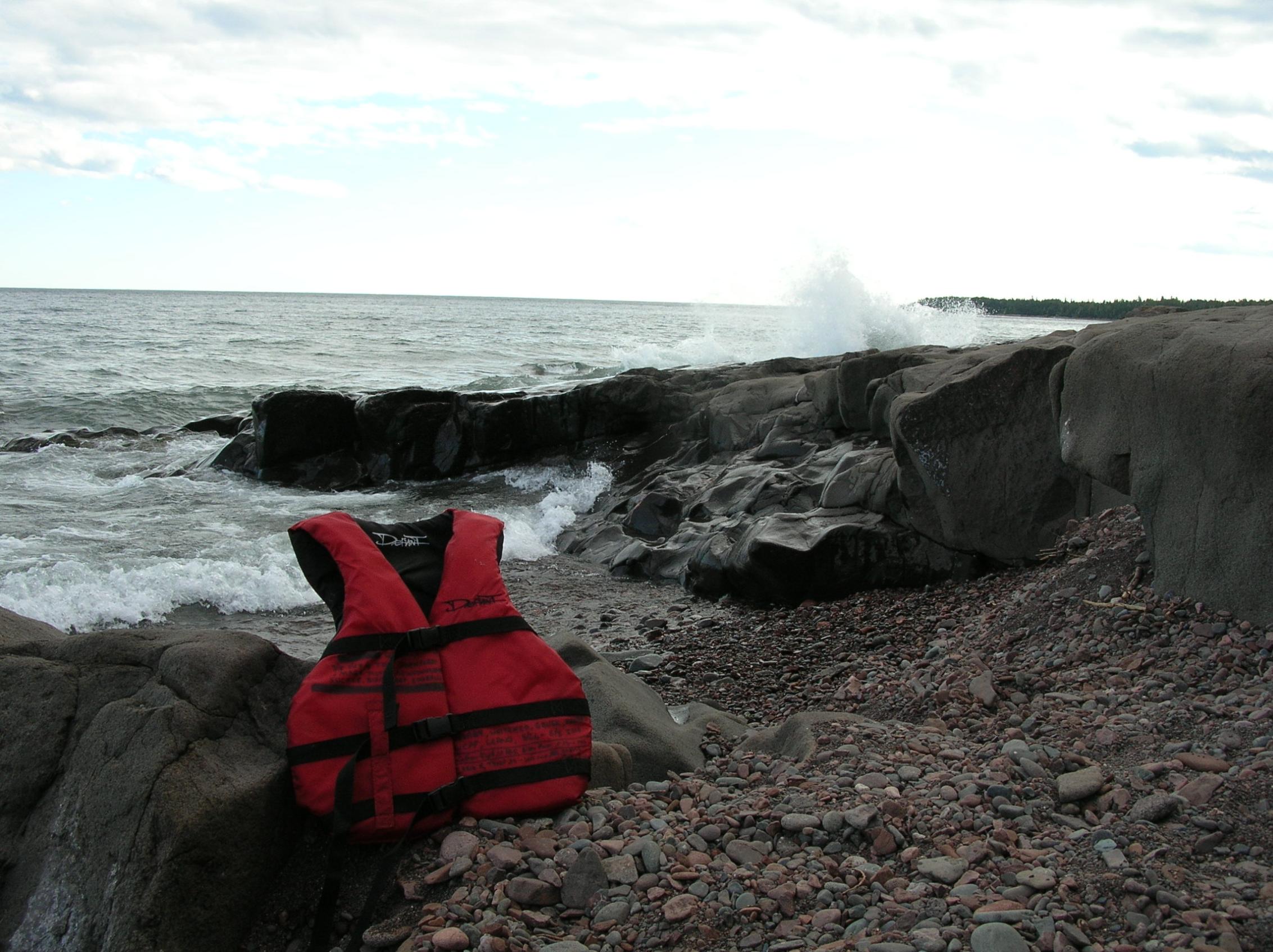