The Super Loop
by RT

Trip Type: Paddling Canoe
Entry Date: 08/08/2008
Entry & Exit Point: Seagull Lake Only (EP 54A)
Number of Days: 10
Group Size: 4
Trip Introduction:
Another year and another BWCA trip! This time however we decided to bring along a fourth person; Donnie. It would also be our (okay, my) most adventurous planning and grandest trip; Big Saganaga Lake to Ely and back. Almost 70 miles of paddling and 4 miles of portaging, this was to be the most awesome trip for seeing the most amount of land, and one of the most annoying and bitch filled (95% of which I will not relay in this report because it is just pointless anyway) trip we have ever taken. In reality, it is my fault for taking a newbie on such a grueling trip. Because of the hardships that Donnie had to deal with (lack of booze, lack of sufficient fishing time and too many portages) I believe that I have turned him off to the idea of traveling in the BWCA. I do believe, though, that he would be willing to do a base camp style trip. Who knows, I doubt he will ever want to go with me again, that is not my style of trip.
Discuss Trip: View Discussion Thread (15 messages)
Day 1 of 10
Friday, August 08, 2008

Because of money concerns (all of us being broke) we could not afford to rent a pair of canoes from Seagull Outfitters. I explained this to Debbie, Seagull’s owner, who seemed to understand, and told her that we would be hooking her up though; we wanted a tow to American Point. She seemed happy with that arrangement (which was planned specifically so we could take advantage of the showers at Seagull) and told us that we could park in her lot for free while we were in the woods.

Matt and Donnie (Matt was living in Donnie’s basement at the time) would not be able to leave until a little later in the day, so I took off in my car and headed for Hinckley; where a pair of borrowed canoes from Michele and Denny (which I had moved from Mora to my cousin house in Hinckley a few weeks prior) were waiting for me. If it was not for Michele and Denny letting us borrow their canoes I am sure that we would not have been able to take our yearly trip.

I got off of work at 8am and my drive up was uneventful; I reached Hinckley in no time. The canoes, a Roylex (thick molded plastic) and a Ram-X (thin plastic with an aluminum framework), were ready and waiting on their trailer so it did not take me any time at all to get them hitched up to my car. Once done I hit the road for Gopher’s apartment in Duluth.

I reached Duluth just before noon, found a parking site large enough to fit my car with the trailer in front of Gopher’s place, and knocked on his door. No answer. I called; no answer. Shit. So I waited for a little bit, expecting Matt and Donnie to be not far behind me. So I gave them a call; they were in Forrest Lake… Fuck! We were not planning on staying the night in Duluth (we had to hit the water that day) so I was concerned that we were already running behind schedule.

After about an hour I was able to get Gopher on the phone. He was just leaving work and would be back to his place shortly (and with a surprise for me). I called Matt and Donnie again, they were passing Sandstone and said they would be to Gopher’s in less than an hour (Donnie is quite the speeder apparently). I was still none too pleased because it meant that we would not be on the water before 5pm, much too late in the day, I figured.

After we all met up we quickly got on the road to Grand Marais. Donnie and Matt in one car, me and Gopher in mine, pulling a trailer with two canoes, trying to keep up. I did my best however and we made it to Grand Marais in short time. The standard stop at the Holiday station for gas and last minute supplies complete, we hit the Gunflint Trail in route to Seagull Outfitters.

At Seagull we picked up our permits and loaded our gear and canoes into one of their old Chevy Suburban trucks and were quickly dropped off at the Entry Point; our tow-boat ride waiting for us. Everything was going to plan, if a little behind it, but I was not worried now that we were on the water.

We made quick time traveling down the shore from American Point (the infamous “Rocky Point” stories were told to Donnie) to Swamp Lake. A quick bit of rain pass over us and we had to don our rain gear, but it blew over in less than an hour. The sun was getting very low on the horizon by this point however, and I was getting worried. I told the guys to keep a look out for any site they could see and that we would take the first one that was open.

Too bad every site on Swamp Lake was taken. With no other option we decided to get Monument Portage behind us (taking the standard group photograph in front of the boarder markers) and take the first place we could find on Ottertrack Lake. We got lucky that first night. There is a site on the Canadian side of the lake, just a short paddle beyond Monument Portage, which we were able to take.

It was way too late to be setting up camp. The sun had set and we were scrambling to get the tents up, dinner cooked, and gear stored away. The site itself was a pain in the ass! Not a level spot to be found, full of rocks that prevented a nice surface to sleep on and, since it was on the Canadian side, no toilet. But the absolute worst part was the mosquitoes. Swarms of them, all of the size of small dogs (or so it seemed) that did not quit, even after sundown, in assaulting us constantly. We set up quickly, ate dinner quickly, and went to bed quickly. Not my favorite day in the BWCA. 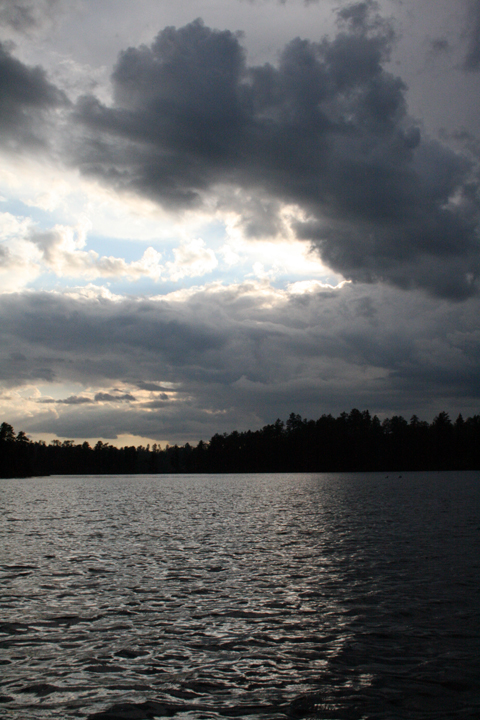 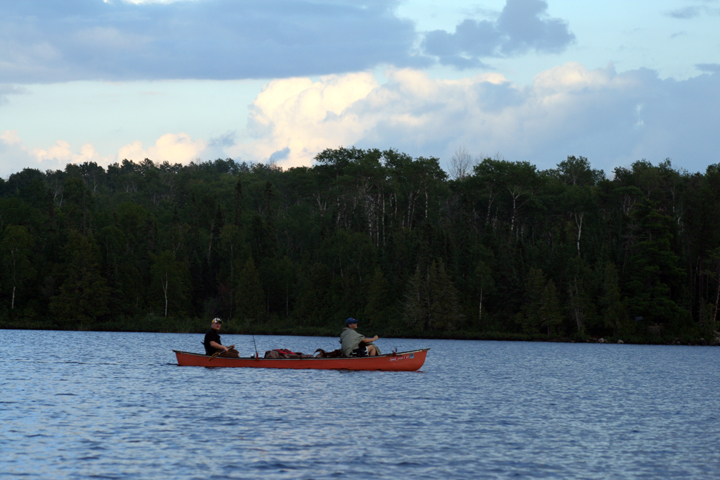