Trip Type: Paddling Canoe
Entry Date: 09/24/2010
Entry & Exit Point: Other
Number of Days: 3
Group Size: 1
Trip Introduction:
I've been planning a trip to the Big Island Lake Wilderness ever since Cheesehead went there and posted information on it. Three times I planned it and had to postpone it. Finally I planned for a week beginning October 6. Then I was offered a seasonal job at Gander Mountain. A perfect job for a retired outdoorsman! I didn't turn it down. My wife suggested that if I wanted to do a trip before starting work I'd better go now, and I did.
Discuss Trip: View Discussion Thread (13 messages)
Report
Friday, September 24th was very windy with scattered showers. I arrived at the parking lot mid morning. Mine was the only car there! I had 5,856 acres and 23 lakes all to my self! This is my first visit to the BILW. 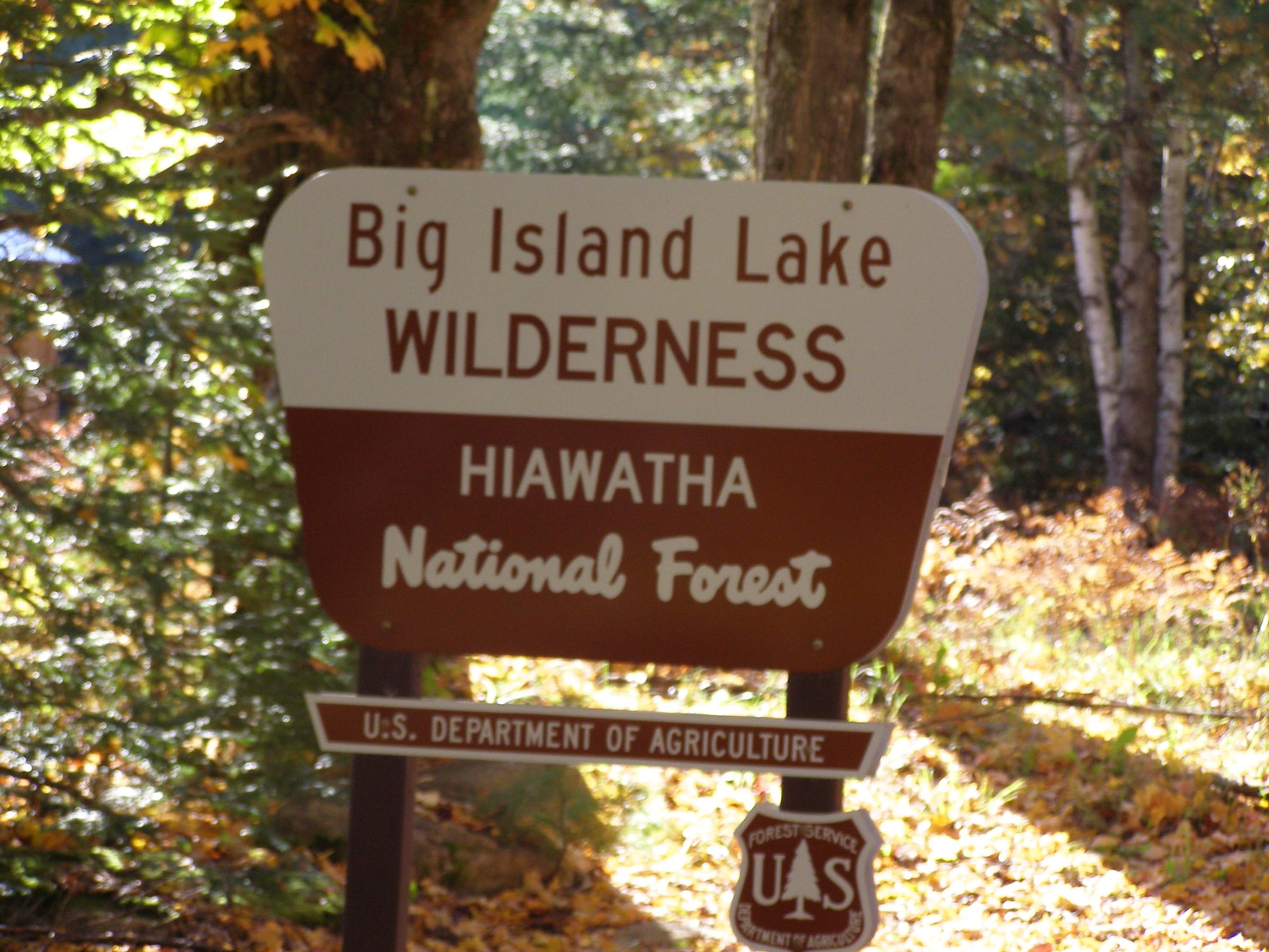 It was so windy I went around the West and South side of the Big Island, hoping to camp on the island site. I don't recommend that way. The water was so shallow I got hung up in deep mud a couple times. Finally made it to the Southeast corner of the island but was unable to turn into the wind in time and soon washed up at the South shore camp site. It was good enough.

I set up camp and considered myself wind bound for the afternoon. I had a pleasant time hiking around the shore line and the hills behind the site. I gathered firewood and some birch bark. I have never seen so much birch bark! Most of the trees on the hillside are birch, which isn't a very long lived tree, plus the beavers had been busy gnawing down a few extras. I sure wasn't going to bother picking up bits of birch bark on the portage trails.

Each camp site has a latrine, or kybo as we call it just like the BW. There is a fire ring with a grate that is hinged so you can flip it back to have a real campfire. I liked that. Also each camp site as a designated post. You're supposed to pitch your tents within 15 feet of the post. 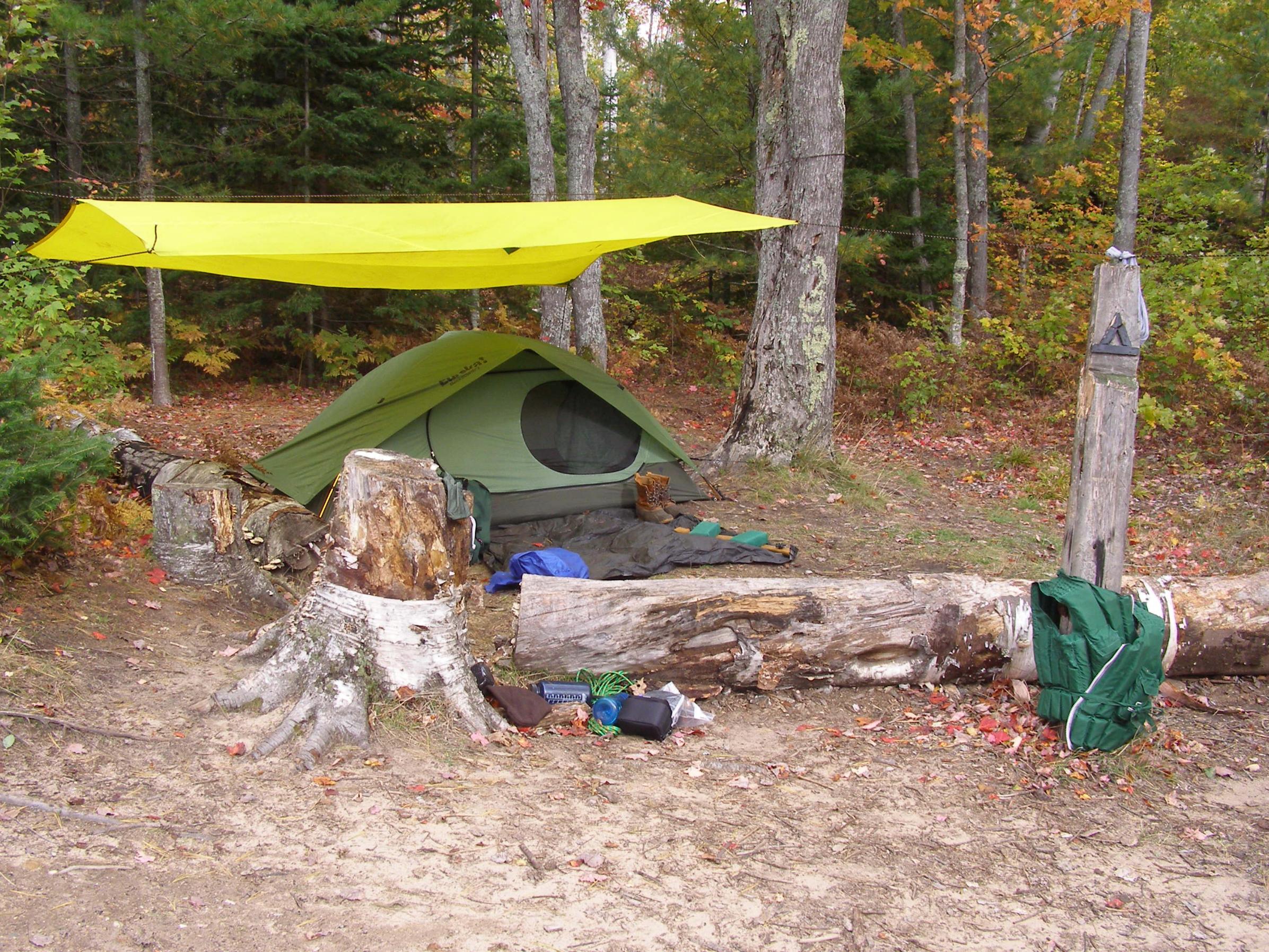 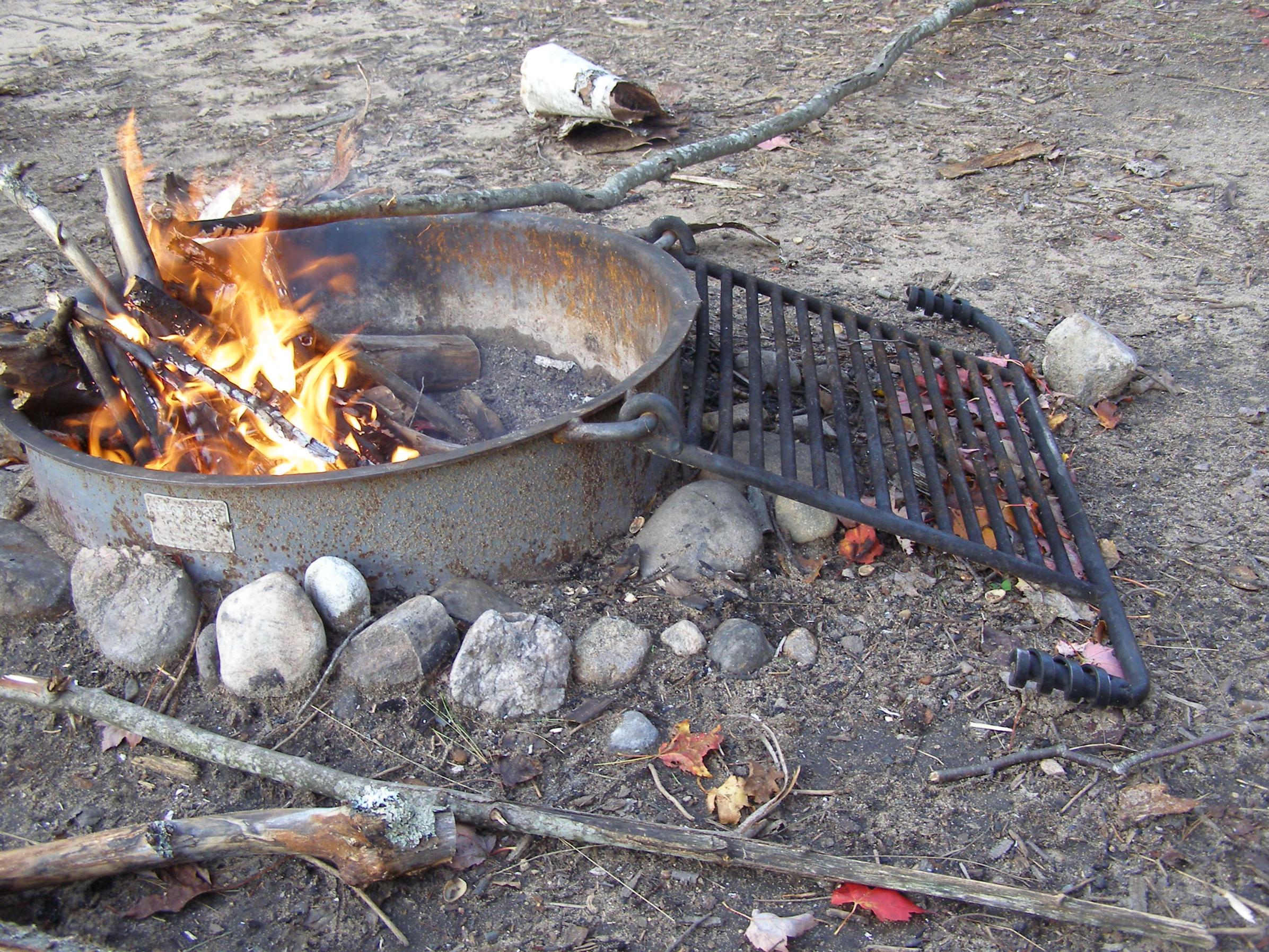 The terrain is a mix of hills and swamp, but the hills are sand instead of rock, so erosion can be a problem at camp sites and portage trails. Many of them are shored up with logs.

This photo is at the island site on BIL. 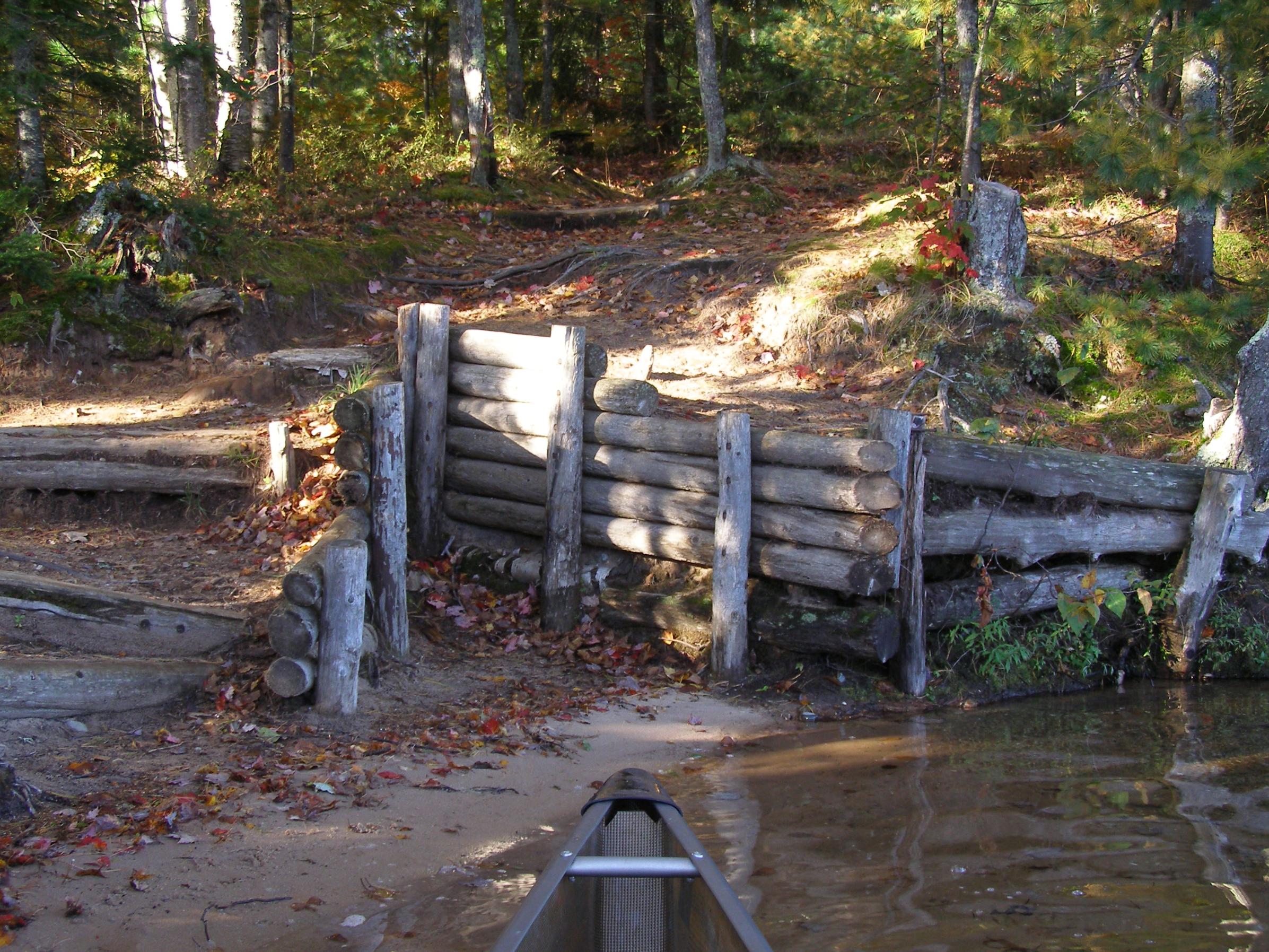 Due to high winds the first two days I didn't do as much exploring as I had hoped to. The second day I took the portage from Big Island Lake to Mid Lake. It's a very short portage, 102 feet (That's all of 6 rods). It drops about 6 feet to Mid Lake. I paddled around a little but the lake is oriented from NNW, so had the full sweep of wind down this long, skinny lake. After a while I came back to BIL and sought the shelter of my camp. I had nice fire and watched the clouds go racing by. Sometimes you could see a star through a gap. 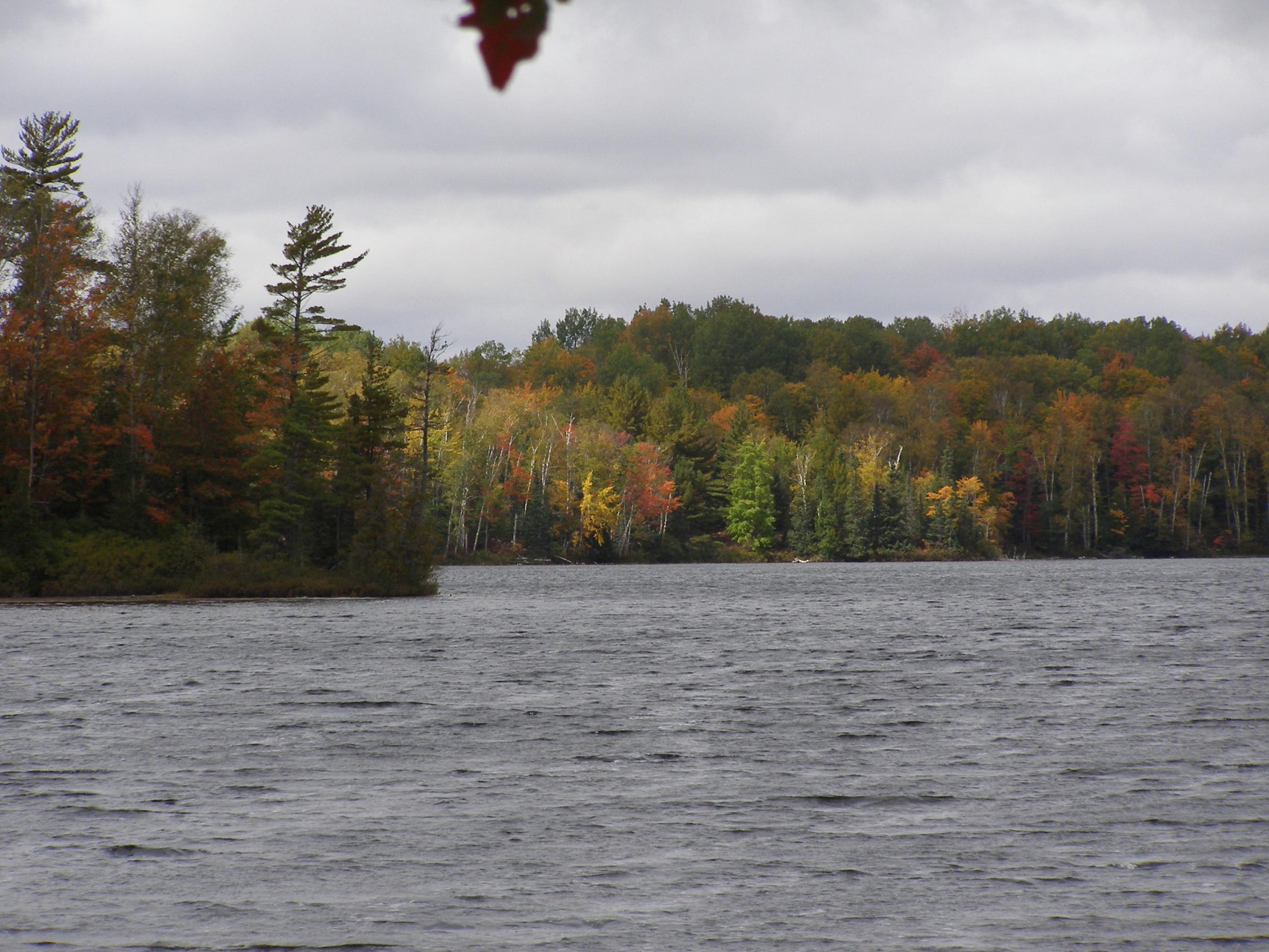 It was a chilly, windy trip, but not much rain.

I saw at least 2 bald eagles, a young one and a fully matured, as well as water fowl, but no loons. That was a disappointment. Saw a lot of beaver lodges and beaver chewed stumps and logs. No bears, but that's OK. It's bear season in Michigan so if they're smart they're lying low.

My last day dawned cold and clear, with no wind. I made coffee and oatmeal, loaded a day pack and did a little exploring. 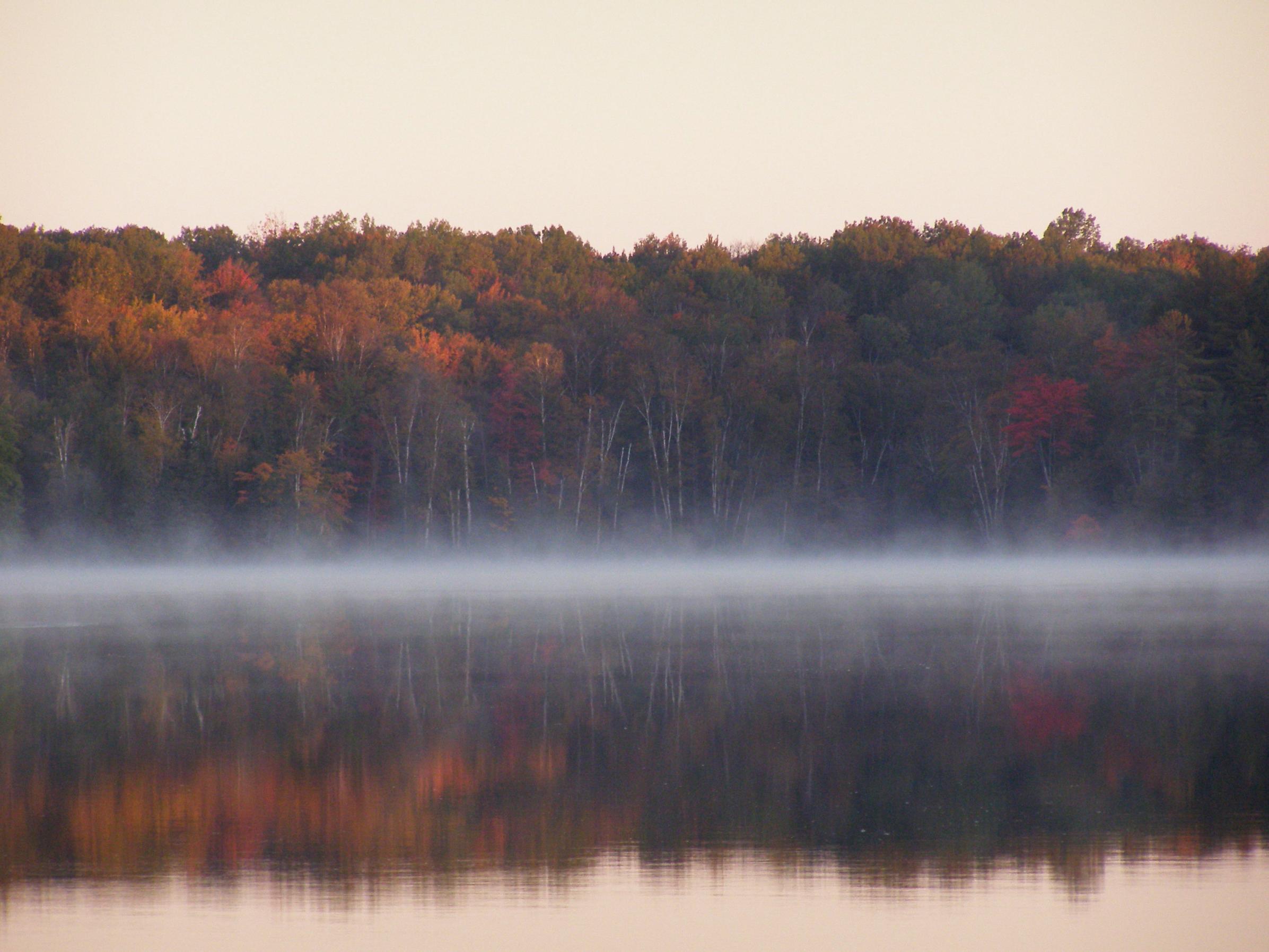 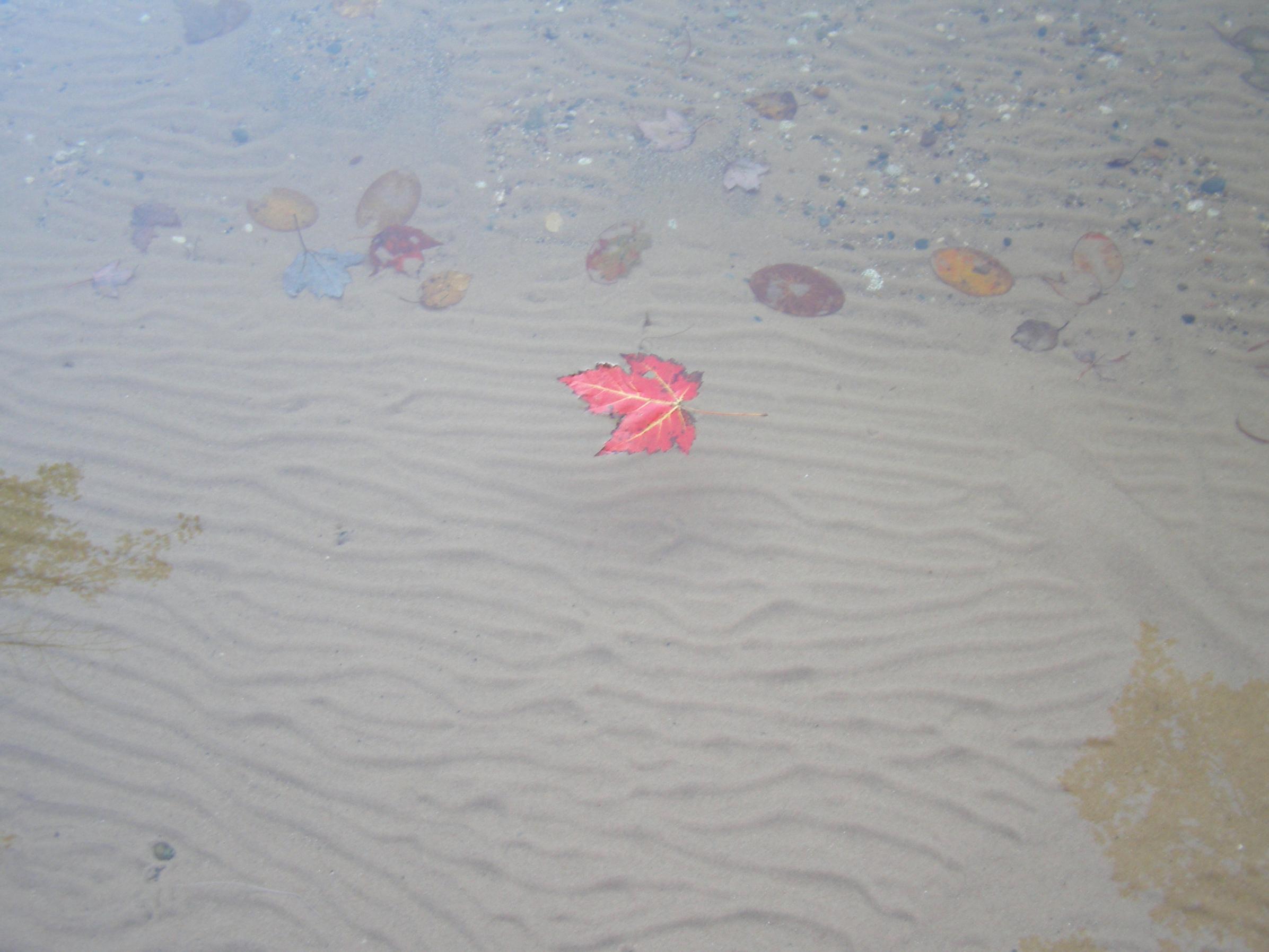 I went back to Mid Lake and searched for the portage into Townline Lake. Because it's not used much the portages aren't as visible as the ones in the BW. I searched the shore but didn't find it. I turned around and checked the camp site on Mid Lake, then found the portage to Coattail Lake. It's not very long but quite steep up and then down. Coattail is a pretty lake too, with only one camp site.

Then it was time to head back and break camp. I even had trouble finding the portage back to the parking lot, and I'd been there before. In the parking lot I met a group from Illinois who camped on BILW regularly. Apparently some of the portages on the $5.00 map I got from the USFS are off a little. They pointed out where I should have been looking and I marked the changes on my map. They gave me a can of imported Polish beer that I can't pronounce or remember how to spell. When I left they had the entire wilderness to themselves.

The Big Island Lake Wilderness Is a very pretty area and is much closer for me than the Boundary Waters. It's less than 4 hours from my cabin instead of 14. Also there is no permit required so I could run up there any time. I'm sure I'll visit it at least once a year. It won't replace the B-Dub though. I'm still going to do my annual trip there.