We woke up just before sunrise, about 5:15 a.m., and walked down to watch the mist lift off the lake. After the sun rose, we broke camp, had some trail mix, a Clif Bar and an apple, made sure everything was properly packed and headed to our Entry Point at Angleworm Lake, arriving around 7:15. This was the earliest we had ever put in. We were apprehensive about the 716 rod portage that lay ahead, but we were excited and we knew that would carry us through it.
The portage was hard, but not any harder than we had expected. We took breaks every 1200 steps or so, which worked out well as we counted the entire portage off at 4760 steps, which gave us three breaks. The second break was by far the best, as it crossed a narrow section of bedrock between two large beaver ponds, complete with standing deadwood in the water. What a beautiful sight on our first portage (see pictures below). At the end of the portage, we were tired, but we had arrived at BWCA water--a glorious sight the first morning of any trip. We launched into Angleworm Lake and worked our way northward. We passed one canoe going the other way, the only people we would see until Tuesday afternoon.
After a couple mile paddle, we got to the portage to Home Lake. At 65 rods, this portage was cake, especially after our long first hike. Home Lake looked nice, but we pressed on and soon came to the 272 rod portage to Gull Lake. This portage was fairly easy, though it was definitely longer than 272 rods. We counted it out at 2200 steps, or 330 rods. (Warning: math detour-- 4760 steps / 716 rods = 6.65 steps/rod, so 2200 steps / 6.65 steps per rod = 330 rods). Not that it mattered much, but it's the principle of the thing, you know. I just like to know how far I'm walking on each portage. Anyway, we paddled across Gull Lake, portaged 43 rods to Mudhole Lake (not a very fitting name, actually a pretty little pond), paddled for 10 minutes, then portaged 61 rods into Thunder Lake. Both of these portages are easy. We paddled halfway up Thunder to the 5 rod portage to Beartrap Lake (the only portage we've ever just carried the canoe across as you can see one end of the portage from the other). At this point we were excited and hoping that the one site on Beartrap was available. As the point we believed the site to be on came into view, we thought we spotted the glint of a canoe--false alarm, just a shiny rock by the shore. Then the next point came into view and we thought we spotted a tent ("Gah, there's a tent there." "But it's right by the shore--who would set their tent up on the shore?" "Yeah, but it looks like a tent." "It does...and there's a tree leaning on it." "Big rock?" "Yep, big rock"). In our defense, it did really look like a dome tent from farther away...and we were suffering from first day I-want-everything-to-be-perfect syndrome, hence we were preparing ourselves for the worst. After all that, when we did find the site, it was unoccupied.
We set up camp around mid-afternoon, admired the intricate bench system (see picture below), had a late lunch and lazed around for a bit. An hour or two before dusk, we headed out to fish for some dinner. Twenty minutes later, at the inlet from Home Creek, in six feet of water, under some lilly pads, I hooked a 17" 1.5 lb. walleye (first fish from the left in montage below) on a spinnerbait (he must have chased off all the Northerns). Boy did he taste great, baked in the coals with some garlic power and oil along with some beans and rice. After dinner we headed off to bed. 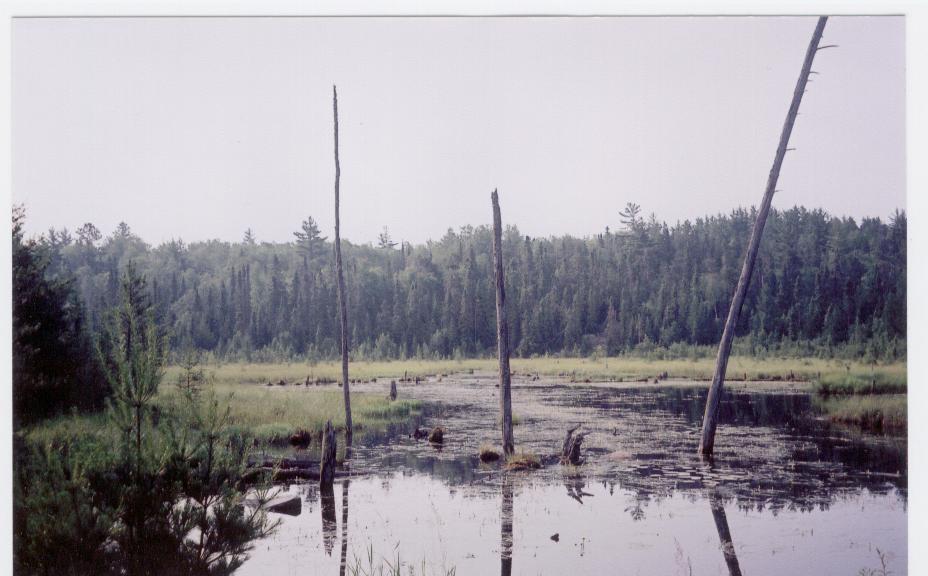 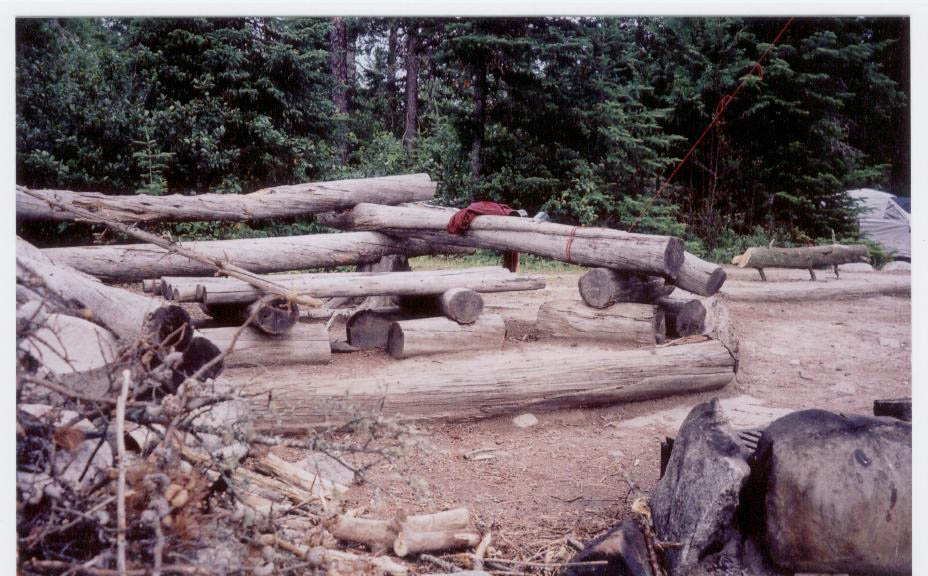