Western Region with Kids
by paddlefamily

Trip Type: Paddling Canoe
Entry Date: 10/11/2010
Entry & Exit Point: Other
Number of Days: 5
Group Size: 9
Trip Introduction:
As fall trips tend to go, they can be as finicky as the weather. Two families decided to venture into the BW for a fall retreat with the kids, ages 5-11. We were a party of 9, with two canoes. The trip changed about three times before we settled on a plan, just a few days before departure. With weather and wind that kept changing, we felt it would be prudent to ensure the kids had a warm place to sleep at the end of the day. Day tripping it would be.
Discuss Trip: View Discussion Thread (4 messages)
Report
We rented a cabin up the Echo trail, just outside of Ely. The day of our arrival was spent planning out what lakes we would paddle as well as hiking options for poor weather days. Longing to get out and explore, we spent the early evening hiking Kawishiwi Falls trail. The kids were like lab puppies looking into every nook and cranny with interest and plunging their feet into the water where the falls exit into the lake. Never mind the water was cold.

Of course, the weather ended up in the 60's nearly every day with sky-blue water. 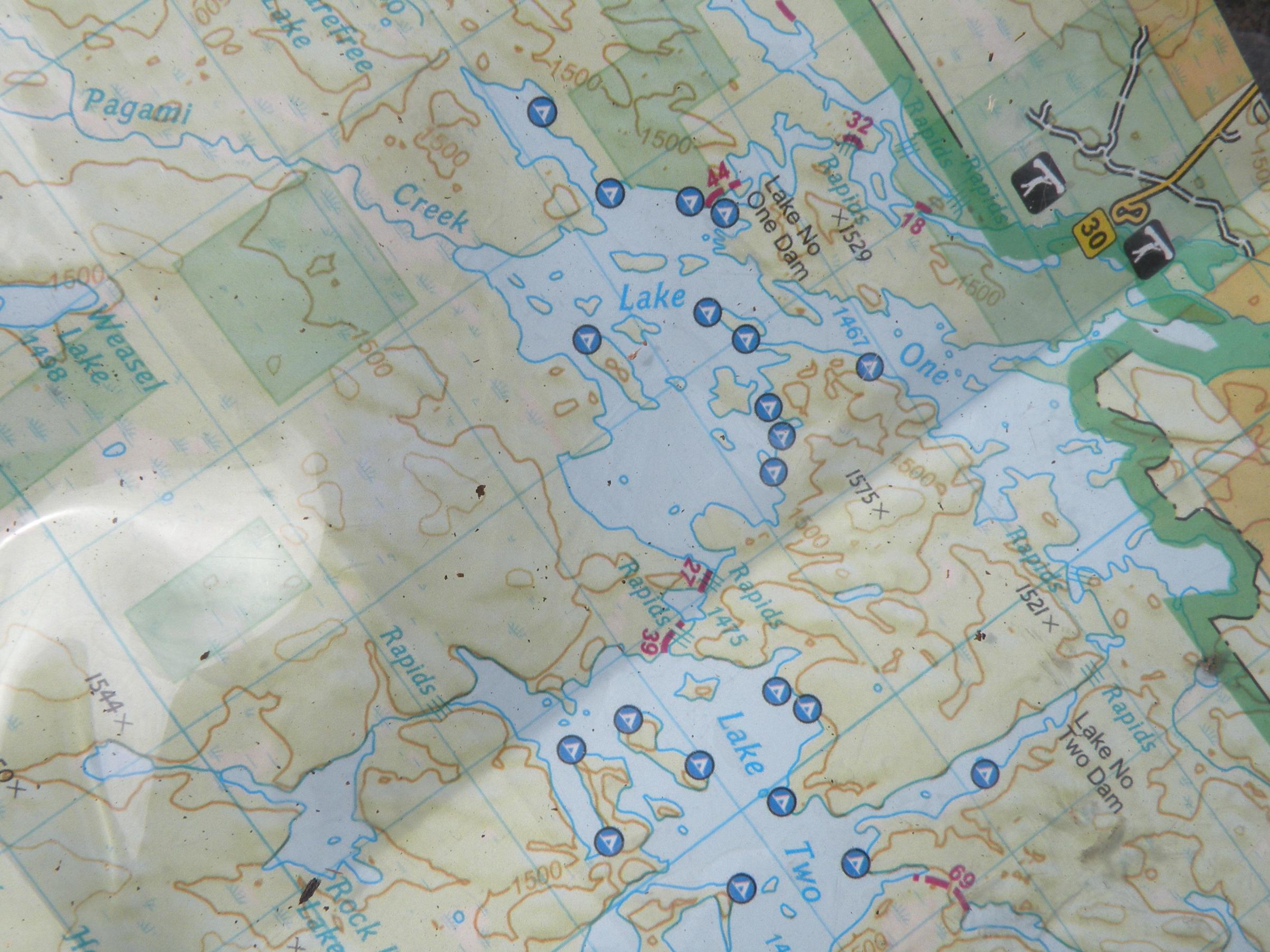 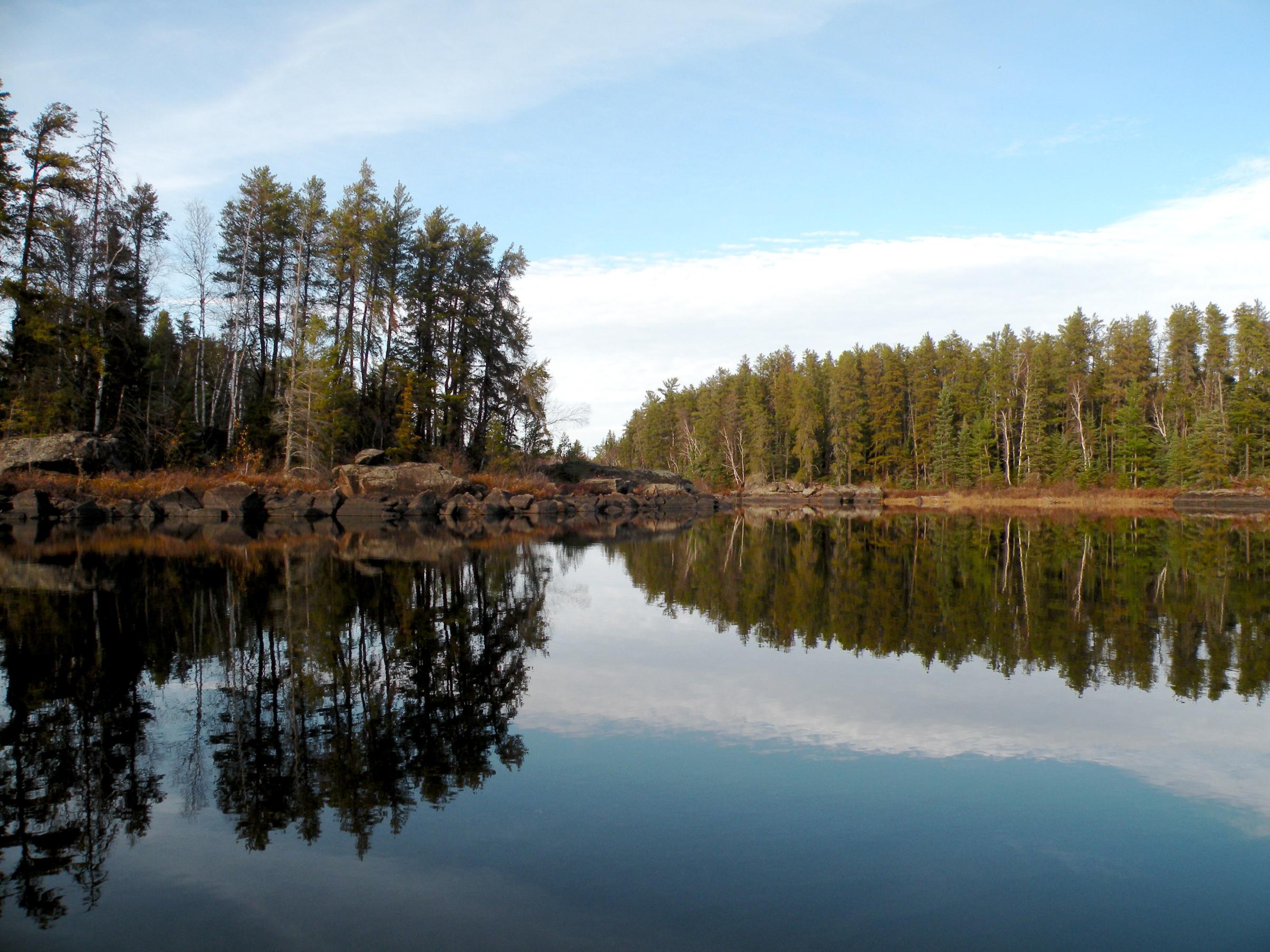 Day One was spent exploring Lake One, EP 30. Not a soul was to be found. We enjoyed the scenic, rocky, arm of the Kawishiwi before heading out into the main lake. The kids enjoyed the variety that the portages and paddling brought. Everyone took turns paddling and we never lacked for a third paddler. After about two portages, they learned to quickly fill their hands with something to haul, usually without being asked.

The afternoon was spent in a small cove at a flat campsite where we enjoyed a fire, meat and cheese lunch and hours fishing. We know the fish were there, but they weren't interested in our lines. The kids didn't seem to mind and enjoyed casting over, and over and over. At one point we took the girls out on the lake. I'm sure we were an interesting sight with four girls in the middle all attempting to cast - carefully. A lot of giggling and not much actual fishing. 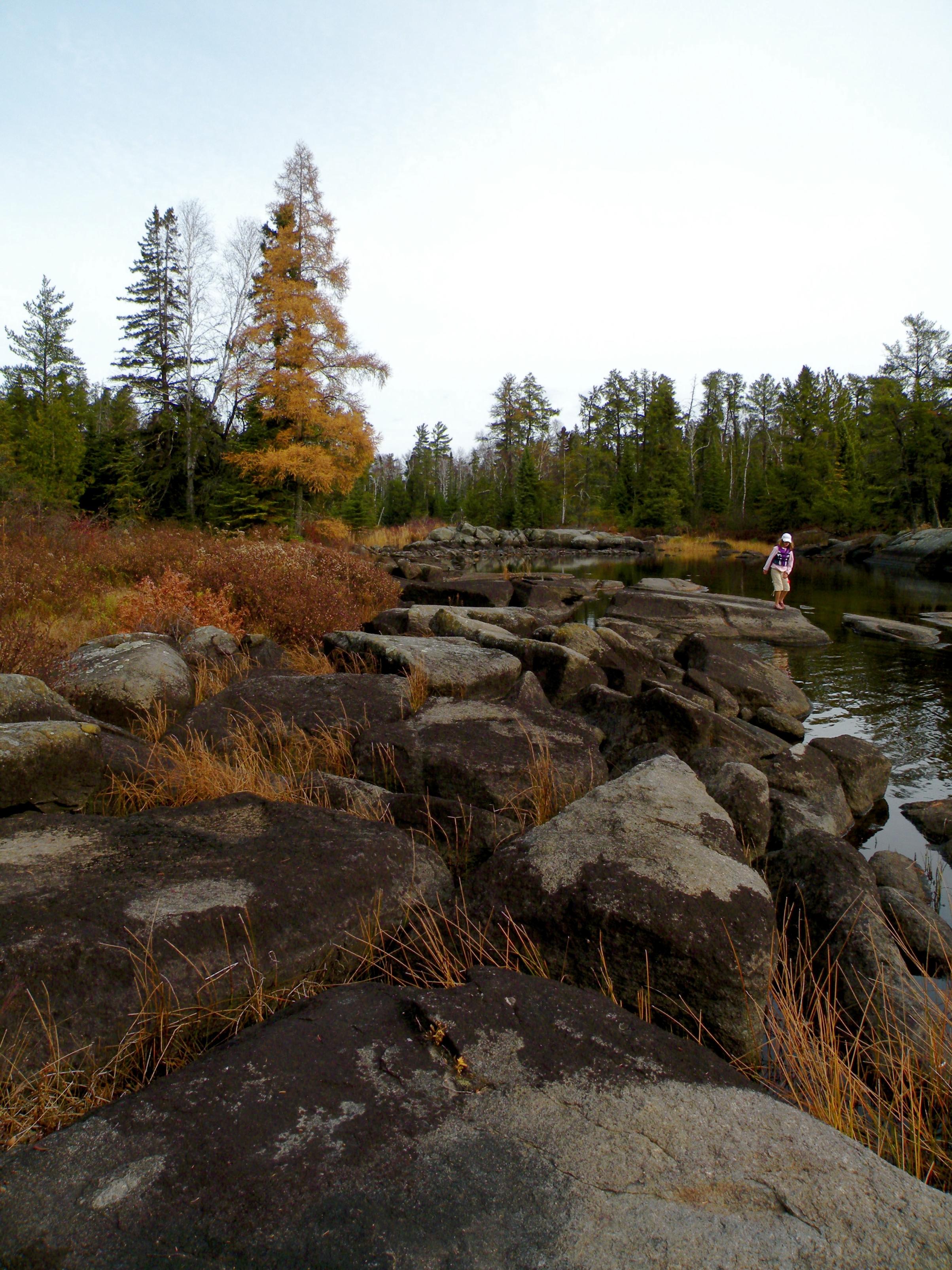 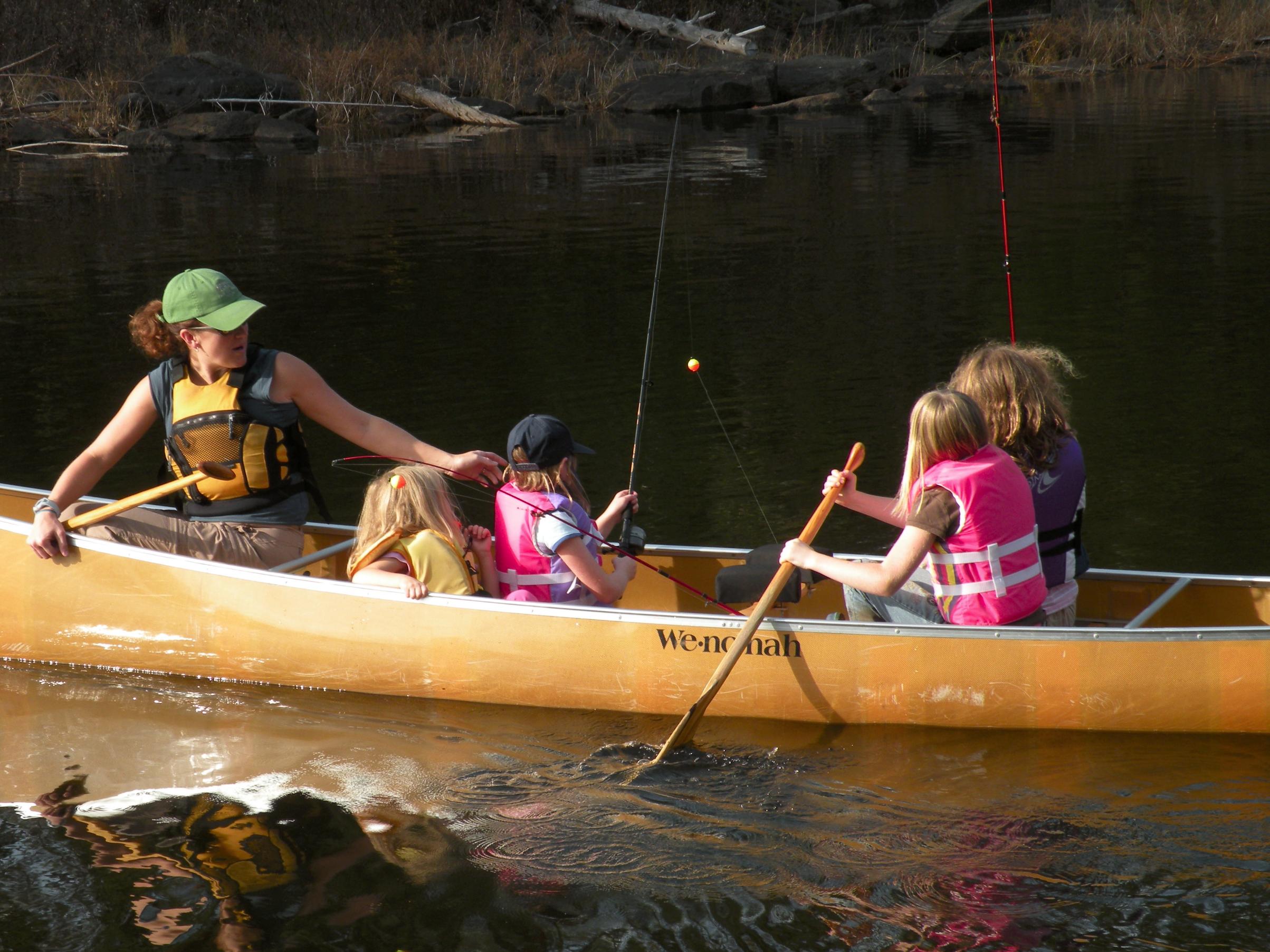 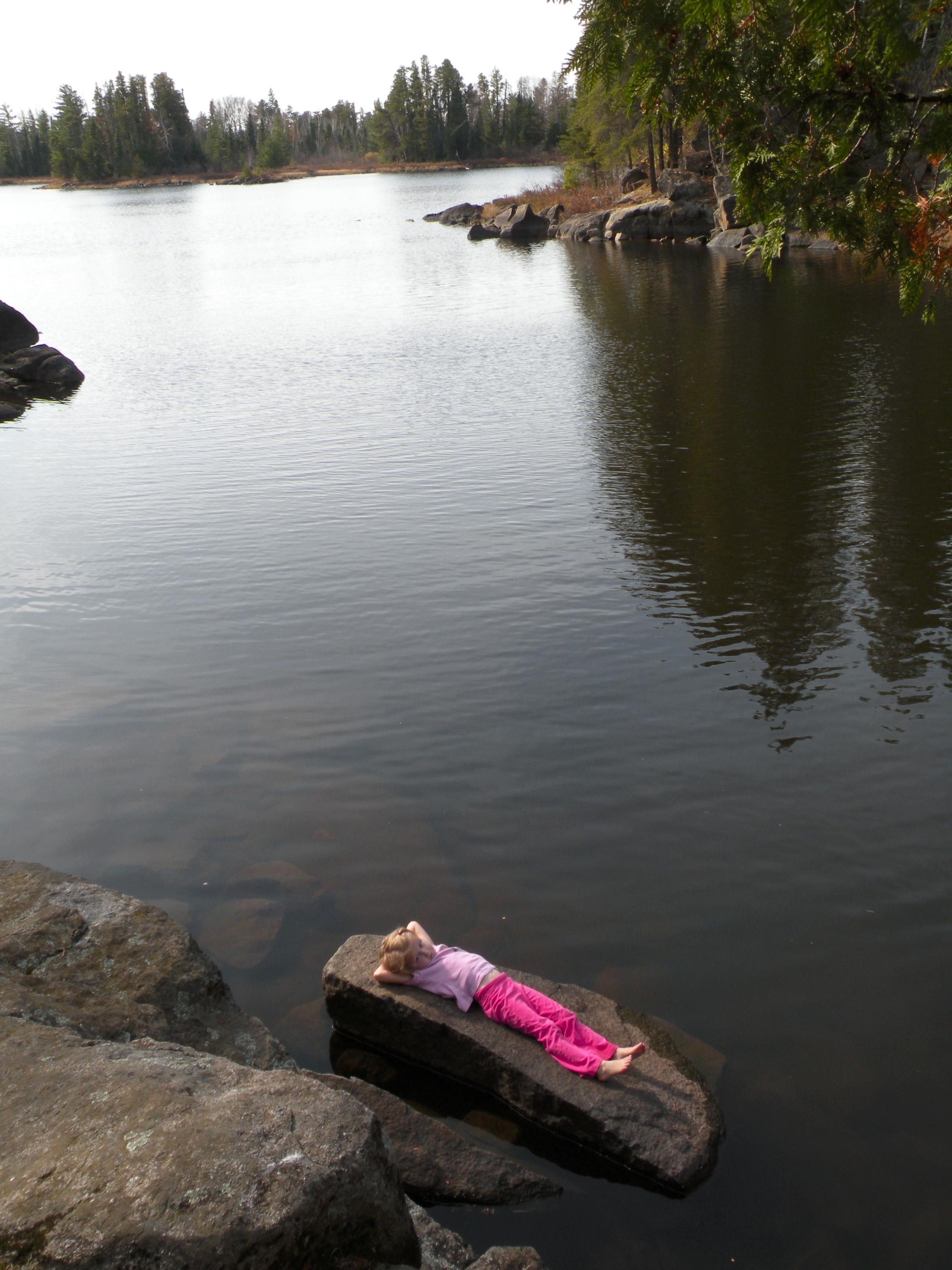 Having two canoes along, one 17' aluminum, and one 19.5' kevlar offered traveling choices for our families. For some reason the kids favored the kevlar dubbed the "Golden Goose". We paddled out of Lake One with four kids and two adults. It probably looked more like a school bus than a goose.

Day two was a wind bound day. The bay off Burntside Lake was full of white caps. So, we spent the morning visiting Ted, Honey and Lucky at the bear center in Ely. The naturalists on hand were very kind and patient answering many questions the kids kept asking them. For those who are familiar with famous bears, Lily and Hope, we've been following their story since before the birth of Hope and so it was meaningful for the kids to see the area where they live. After lunch, we went on a three mile hike around Dry Lake located off of the Basswood Trail. The kids spent time exploring at Dry Lake waterfall that outlets into Bass Lake. Birch bark boats were made to float the cascade in hopes of a successful journey into the lake, an a few made it. Pants got wet and sleeves got wet, so we made a stop further down the trail at a campsite to make hot-chocolate and dry off. Dry Lake trail is has scenic 100' ridges to scramble across, dense thickets of spruce and birch and lovely campsites to lunch or take break at. The distance was just right for the kids with many interesting points. They seemed especially fond of identifying different lichen/fungi. Pixie Cups, British Soldiers and Puff Balls were among the must-see. We ended the hike as the sun was setting and a family of eagles were looping the lake. 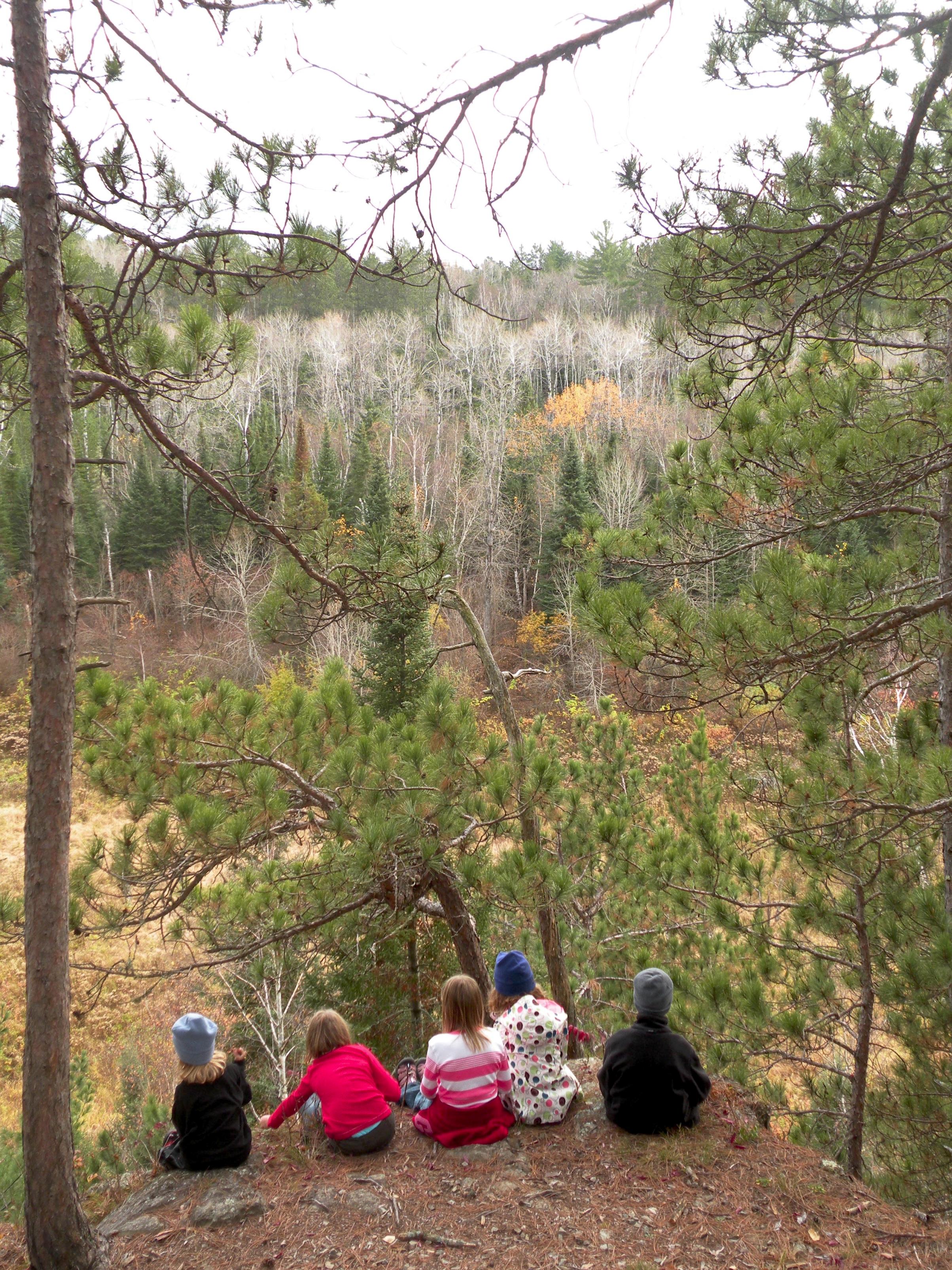 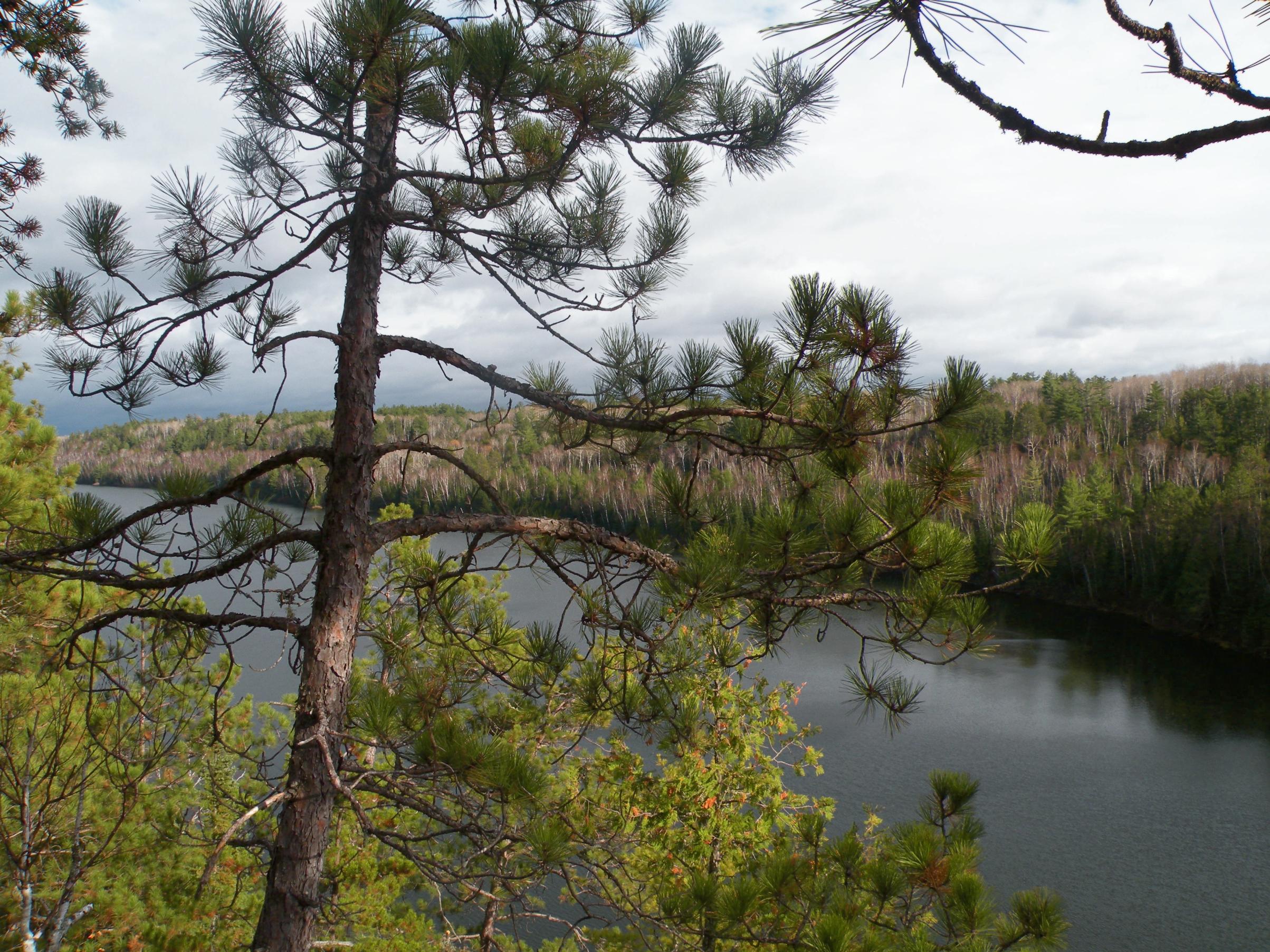 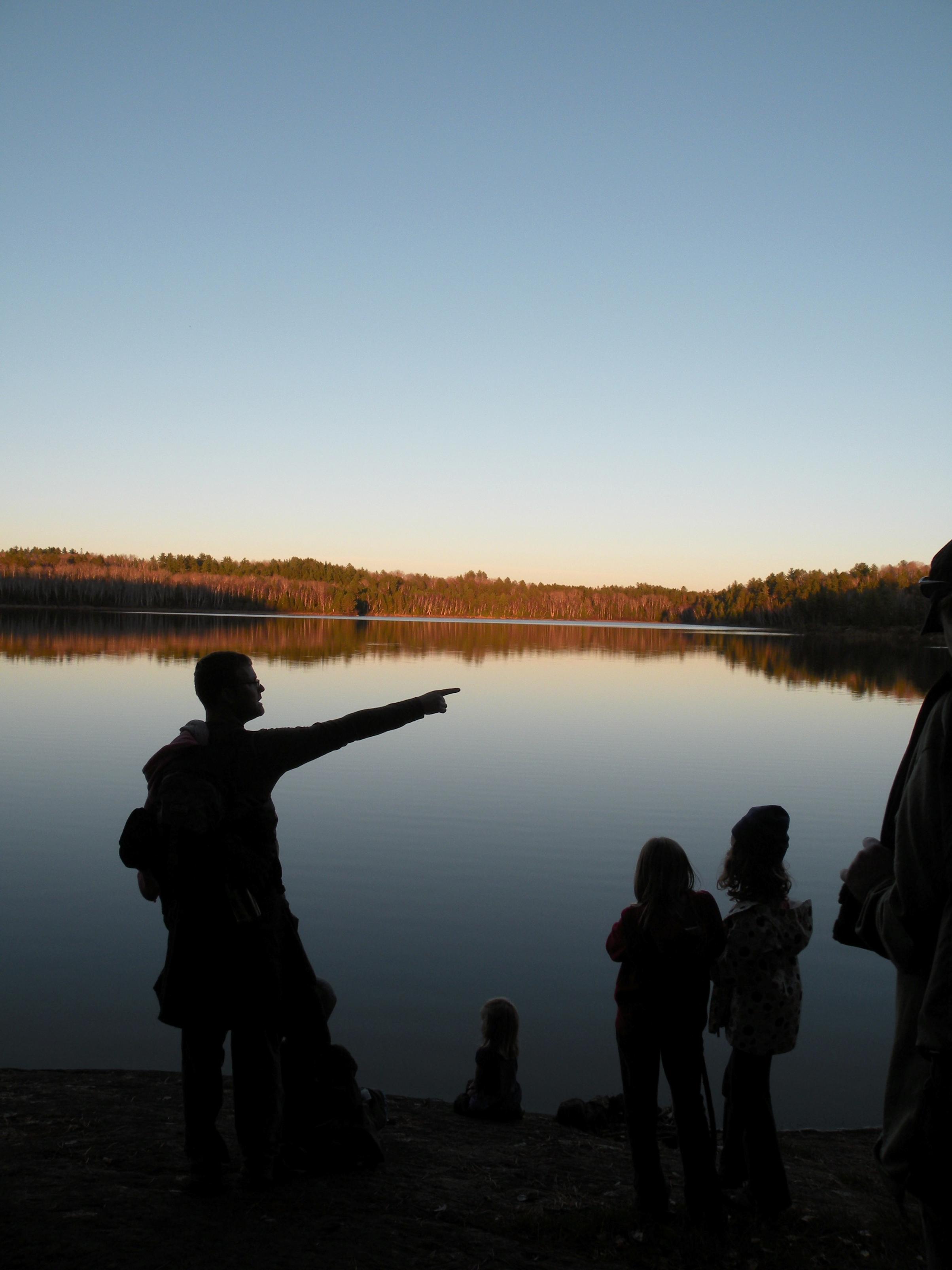 Day three was spent exploring the Hegman Lakes, EP 77, with a side trip into Little Bass. We didn't tell the kids about the pictographs on North Hegman. It was delightful to see them "discover" them on their own. Many guesses were made as to their age, how they were created and what they might mean. This was where the one and only fish of the trip, a bass, was caught. It was enough encouragement, however, to keep everyone fishing. On Little Bass Lake we had a fire and lunch on one of the three campsites. The adults had creamy pasta with salmon and gruyere cheese. The kids feasted on hot dogs with mac and cheese and cut veggies. Hot-cocoa with colored marshmallows topped things off just before leaving the site. To pass longer stretches of paddling we were serenaded with various renditions of "99 Bottles of Beer on the Wall" or various messed up Holiday songs. They are still spinning in our heads. Whatever happened to "Kumbaya"? 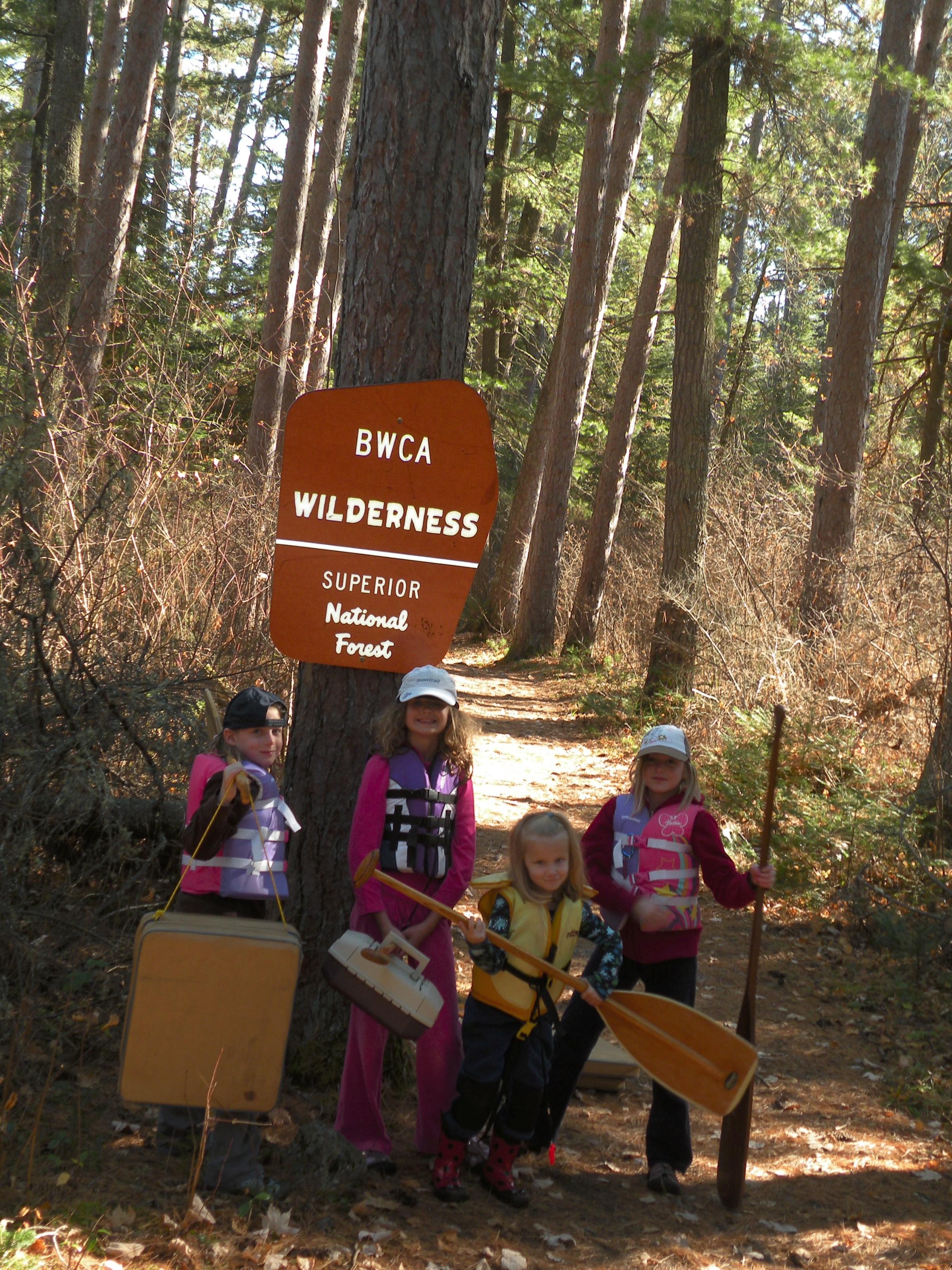 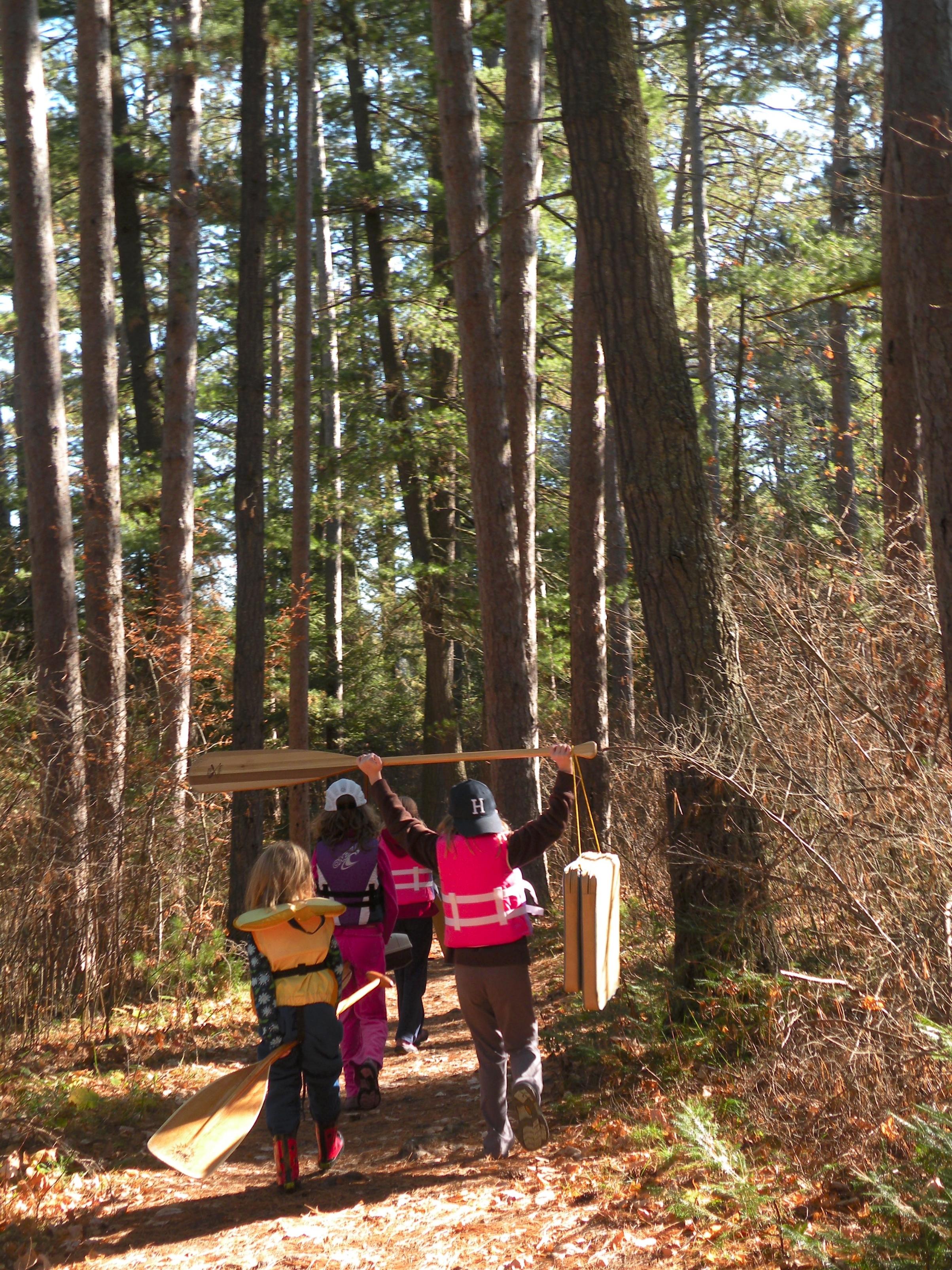 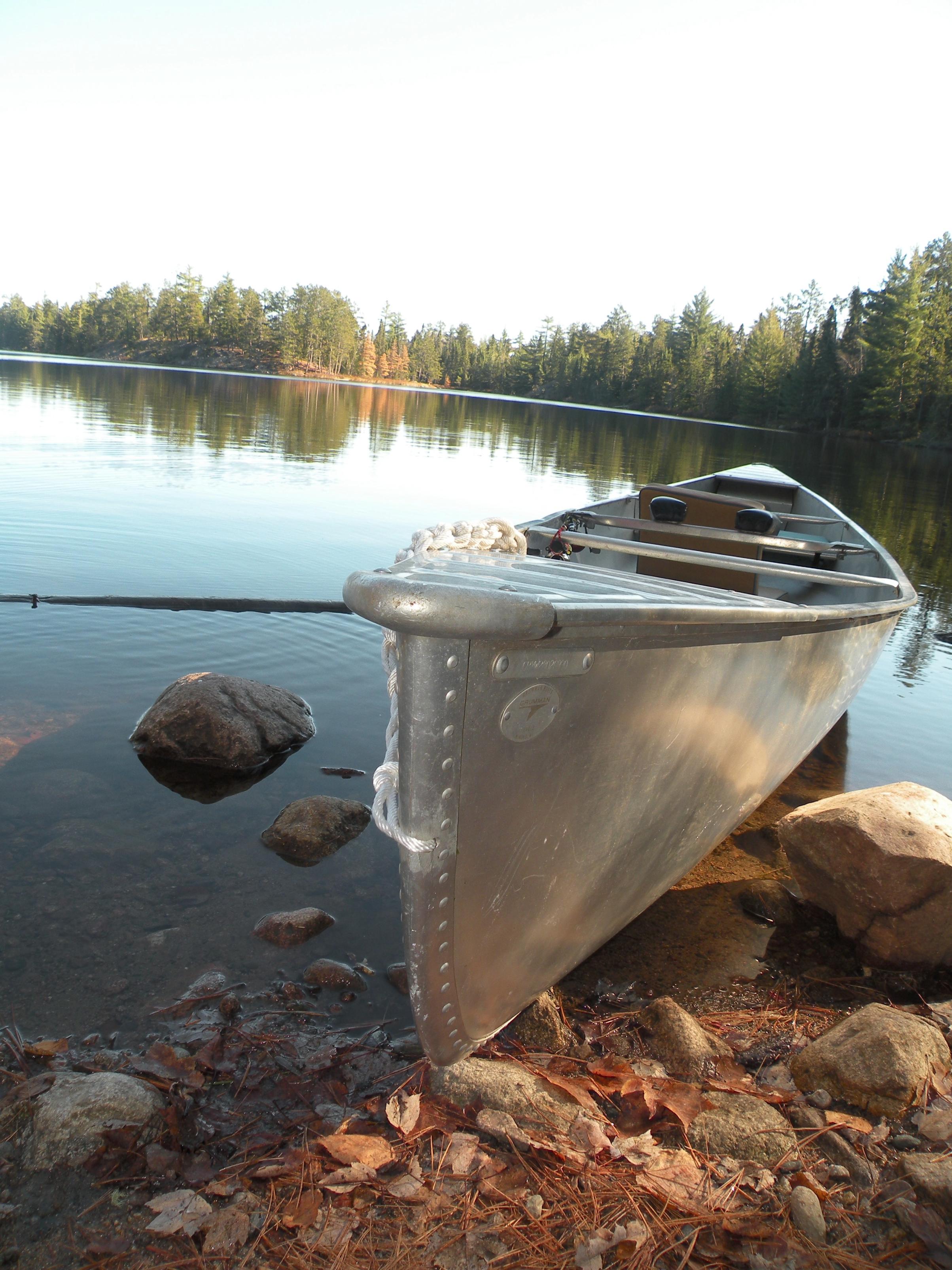 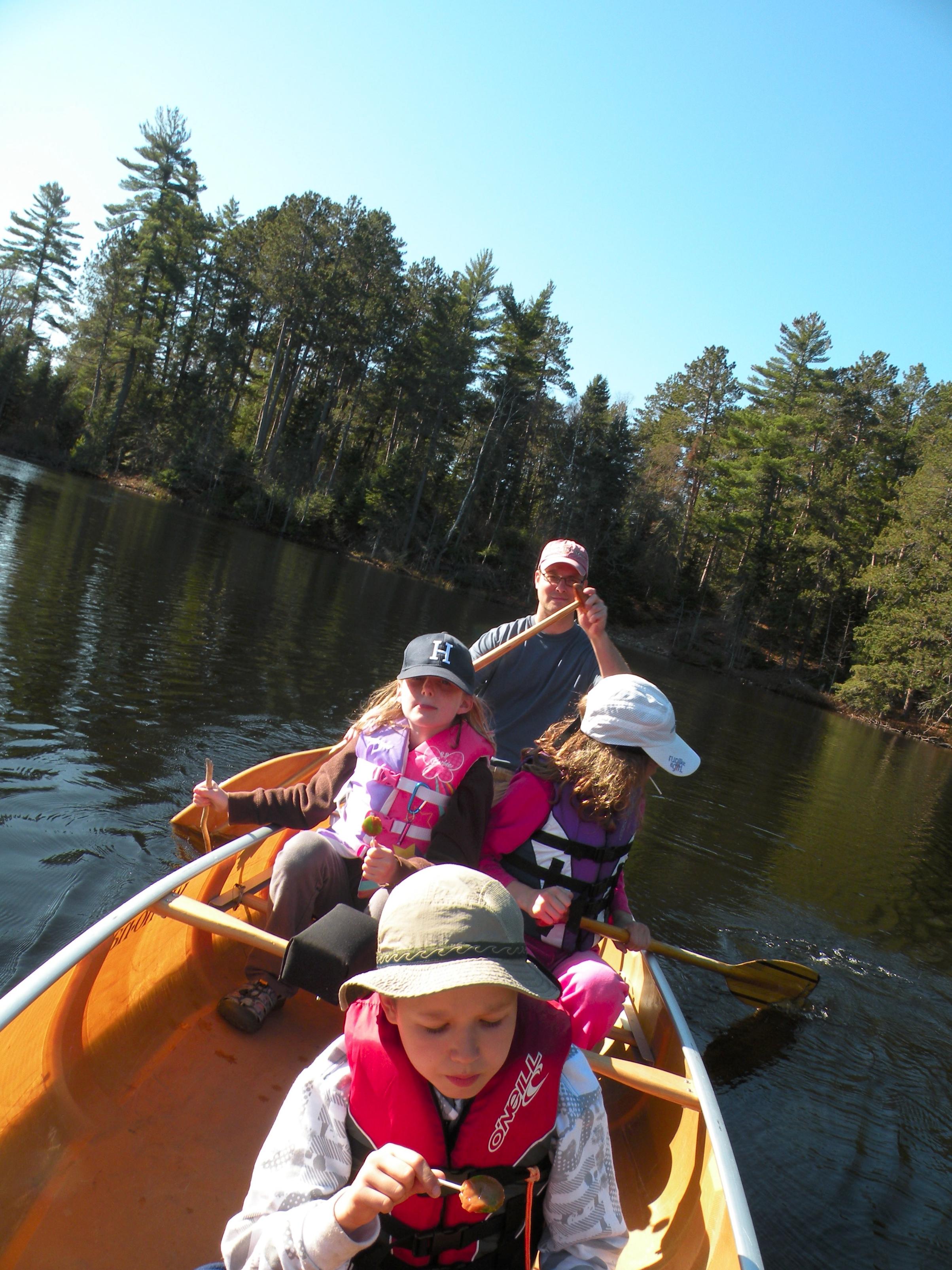 The evening was spent by the fire and sitting out on the deck watching for shooting stars and spying the elusive satellites.

Day four was broken up by a morning drive up the Echo Trail. We stopped at Big Lake and the Moose River, EP 16. The Moose river entry was beautiful with a grove of leaf-less aspen. We hiked down to the upper rapids and found evidence of grouse hunting. Soft gray and brown feathers covered brilliant green mossy areas making for a unique still life. The kids scrambled down to the river and spent an hour rock-hopping and hurrying along to check "around the next bend". 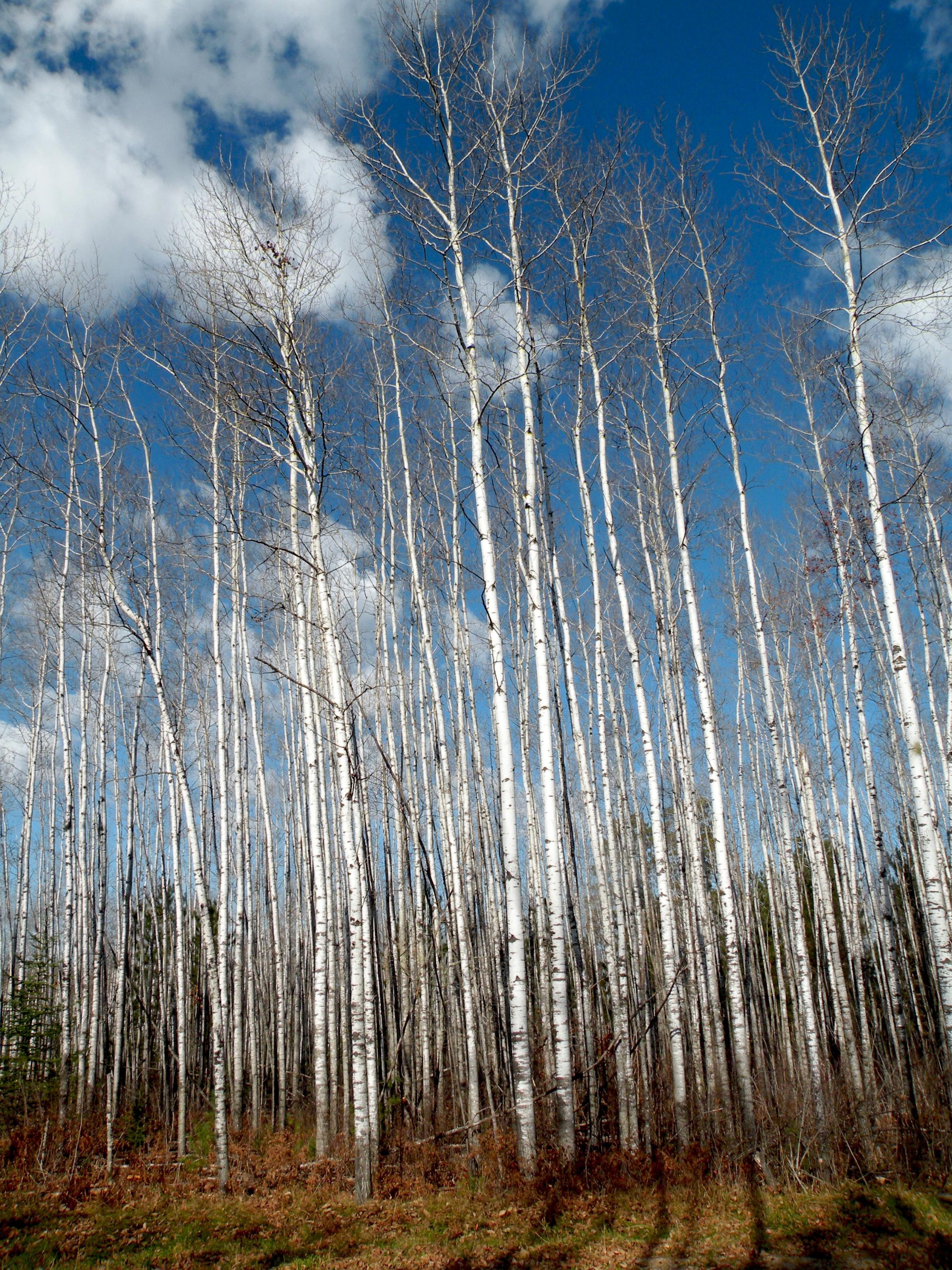 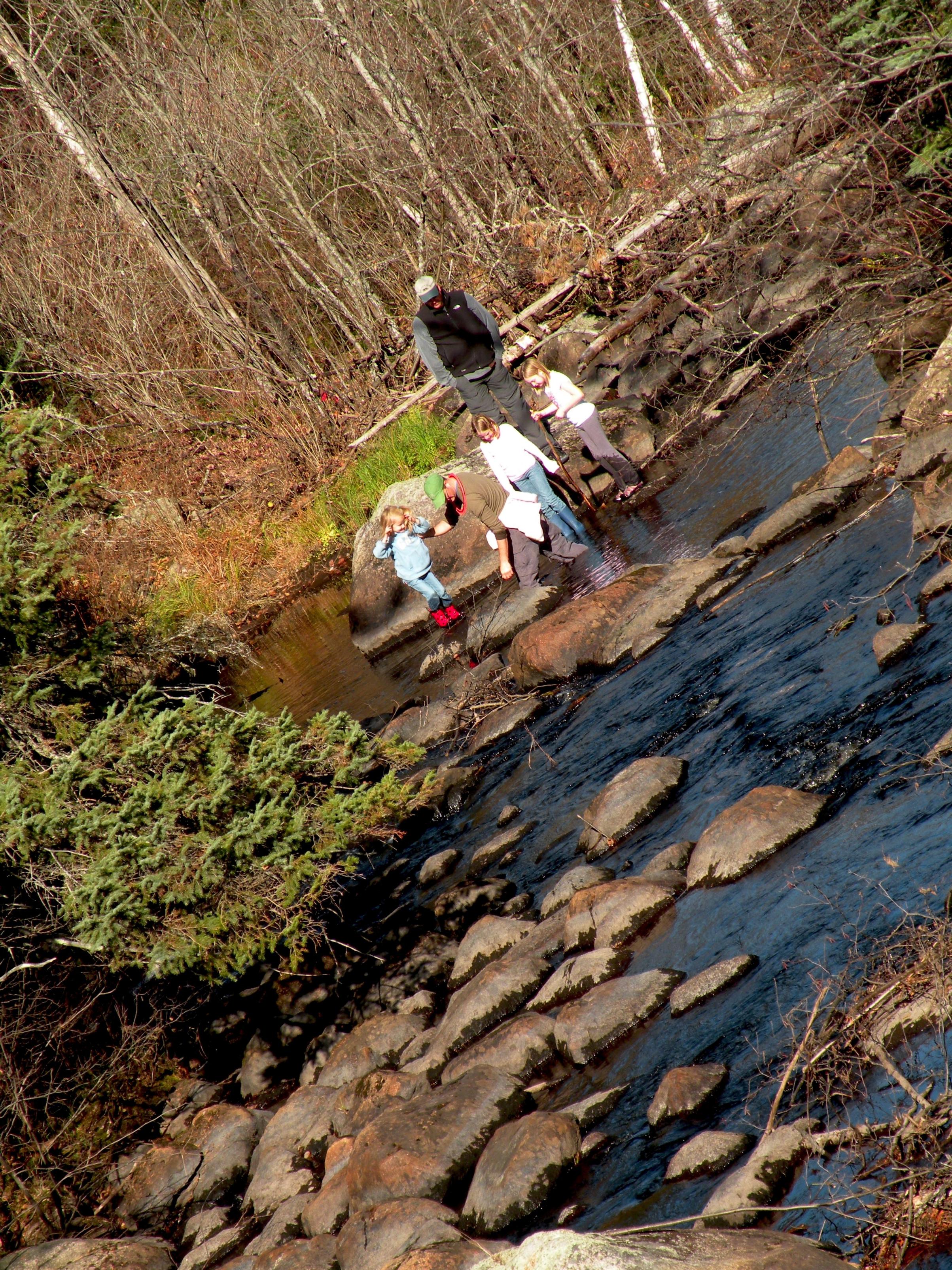 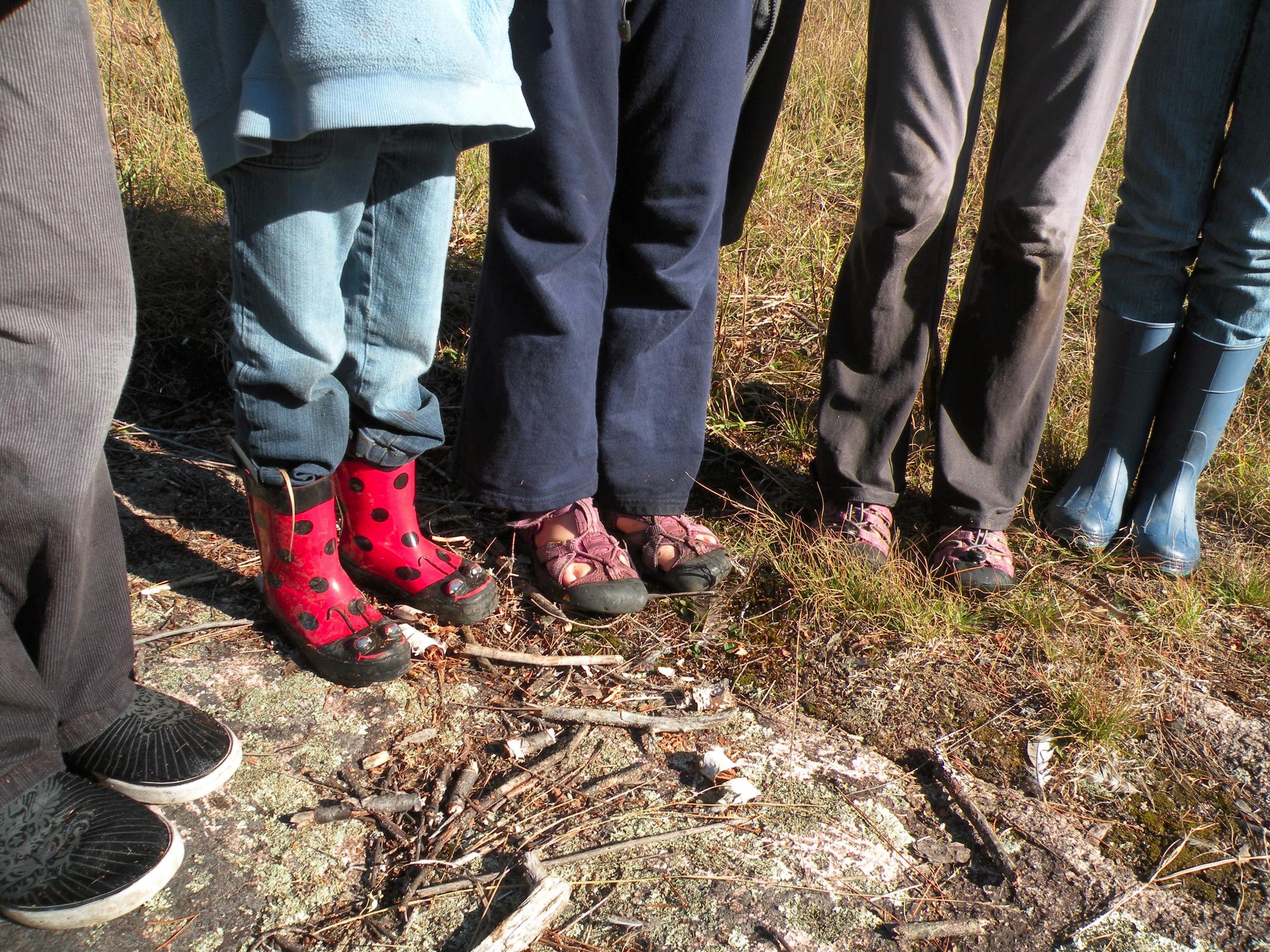 The wind picked up in the afternoon, so time was spent playing games back at the cabin and exploring the neighboring woods. The kids collected lupine, indian paint brush, woodland phlox and purple cone flowers for the kitchen table. The last of the season, we're sure.

Day five was the day of departure. The other family had to leave early, but we were able to squeeze in one more paddle. This time we entered onto a becalmed Slim Lake, EP 6. If you've never been there, this is a lovely lake, with quick access off the Echo Trail. Paddling north towards its narrow end, we portaged into Rice Lake, which was dotted with the last remnants of wild rice stalks. We stopped at the lone campsite to snack and search the woods for signs of animals, their holes or dens. We found a sizable den that must have made good quarters as it was near water, yet well protected. The gold tamarack trees lining the shore made for a lovely backdrop against the deeper greens of the large spruce. We didn't have the range of peak fall colors, but we had quite a variety of colors and textures, none-the-less. 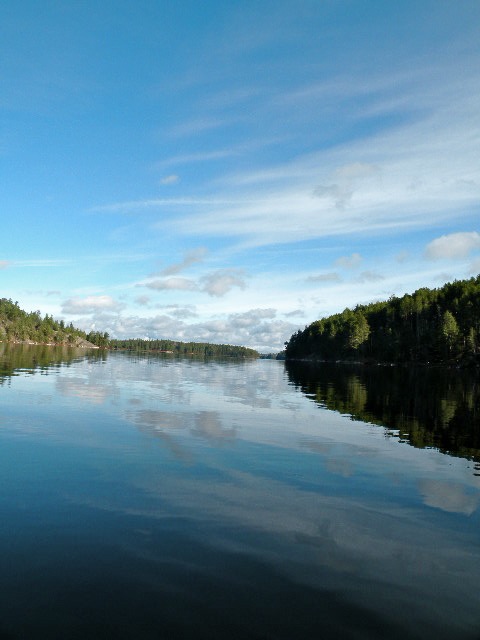 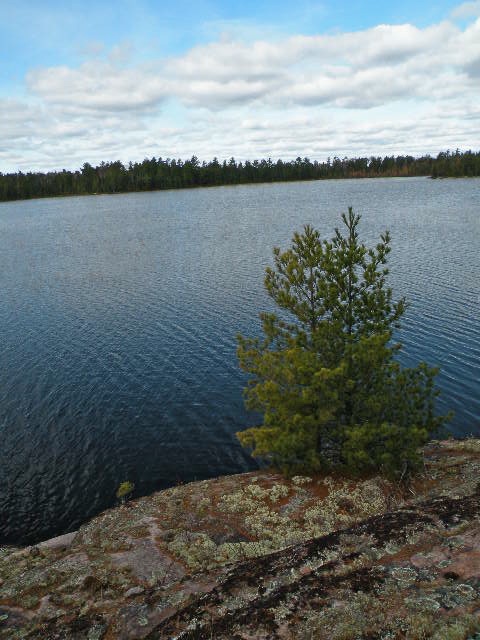 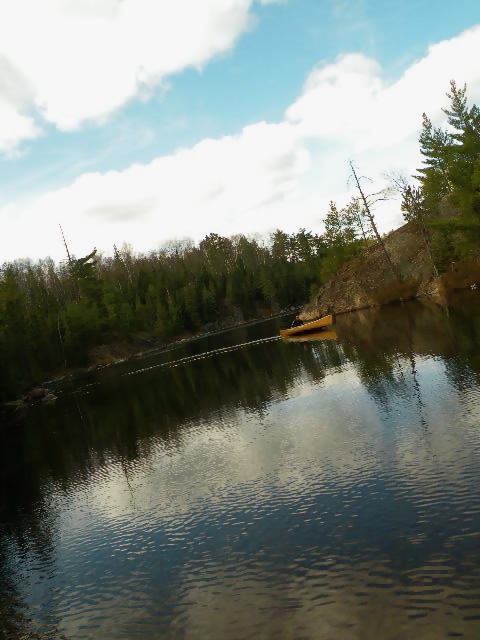 Finally, we let out a long sigh, settled into our canoe and made our way back to the entry where we reluctantly made our way home.
Back to Trip Report Main Menu