I woke up just prior to the alarm going off at 445am, packed camp and made breakfast on my tailgate. I succeeded in burning my bannock in the darkness. My SnowPeak GigaPower is very testy when on low/minimal power and has an urge to open up a bit.

I drove to the entry point and made ready. I decided last-minute to move my truck to a closer spot and was glad I did as when I returned some days later I found a deadfall had taken up that parking space!!! I decided to take care of some business before pushing off, but found the pit toilet to be a wreck. Disgusting actually.

In starting my paddle in the Bell Magic, I found it very tippy and was fearful of a capsize on a large lake such as Moose Lake. I knew some of it had to do with my own high center of gravity. I'm 6' 5” and 230 pounds. After an hour I eased into it's peculiarities and found it to be stable so long as I kept my center low. I tried the kayak paddle but could not get used to it, also finding it to be a bit noisy and splashy as well as very wet. I stowed it on the first portage and there it stayed for the duration.

My paddle up Moose Lake was uneventful, though I pushed myself to get it over with. I got to Birch Lake in about 2 hours with no stops for rest. A few motorists were rude, especially one that was apparently lost and fully loaded down. At full power he was not planing off and causing a great wake. The tows were more than courteous and went out of their way to make sure that when they went past they did so at angles or perpendicular. The wind was 5MPH or less.

Once on Birch Lake, the noise of motor boats slowly faded and I saw perhaps one other canoe on the south side of the Isle of Pines. I made a stop at the second site on the U.S. side and found careless canoeists to have thrown fish carcasses in the shallow area just off shore. The crayfish were making work of them. As I pushed on, the wind lessened and I was paddling on very smooth waters. My first portage was the worst as I attempted to get gear organized and strapped for the carry. I found that D-ringing the Pelican case the to back of my pack was not the way to go.

Toward the end of Carp Lake a loon was acting very strange. It's actions were definitely directed toward me. At first it played as though it was wounded about 100 yards in front of the canoe, flapping wildly through the water, then looking back at me. This scene was repeated several times for perhaps 200 yards. I was a few hundred yards from each shoreline and thought the behavior odd since I couldn't be terribly close to any nest. I have inadvertently paddled by nests in the past and not disturbed them. His/her mate looked on from a short distance to my stern. The loon then let me canoe right on by at perhaps 15 yards and didn't seem disturbed at all. Then it dove and swam underwater along side the canoe for some time. It was quite a sight and experience and I can only attribute this to “playtime.”

The next portages were a bit tough due to the heat. I endeavor to set my thermostat at home at 63 in the winter. I was dismayed that my maps didn't show these many small portages. That combined with them not being just a light carry-over made for a workout. Portaging in heat nearing 85 was exhausting. The last few portages, included into Knife Lake was a triple-carry. I didn't mind this though as it gave me a chance to walk through these woods and smell what reminded me of Utah's high desert. Vanilla tones of the Red Pine, sweet fragrance of the balsam and spruce and the occasional cedar undertone combined with the musky scent of last years leaves decomposing made my nose sing with excitement. The 85 degree heat and 15% relative humidity really brought the scents out. The sounds of the white-throats and more than just an occasional drumming of a partridge made the steps between hauls fast and light. This is what I was here for and was glad to experience such invigoration of my senses!

I made a stop at the northwestern campsite of Isle of Pines to take care of some business and rest a bit. I stretched my back out and lay on the ground for a bit, listening to nature. I also reflected on some of the portaging issues I had and decided to carry items in both hands with a pack on, vs. trying to strap or D-ring them onto the back of my pack.

By now the wind had calmed completely and prior lake disturbances had finished bouncing off shorelines. There were puffy cumulus clouds in the sky and the blue of the sky stretched from horizon to horizon. This resulted in a near- perfect reflection in the water's surface. Being out in the open water I had no close reference points or reflection of land. In essence I was canoeing through the open sky. Several times I lost my internal balance and had to reference a distant shoreline to stop the vertigo. This is a BWCA paddlers dream and I experienced it on this my first day!

I begin looking for a campsite and take a look at one on a point. There is another just around the corner. It's a fair campsite, but the view down Knife Lake is absolutely outstanding. I decide on the site. Just after setting up camp a tandem comes by. I believe they took the next camp down, but I never heard them. Hope it was the same for them. It looks like I was perhaps the second person/group to use the site. Seagulls were loud to the south of me on a rookery-looking island. They continued on for a while and it reminded me of all the time spent in my youth on the shores of Lake Michigan and Green Bay/Door County.

Dinner was served up, consisting of something freeze-dried and forgettable, followed by a campfire and some responsible imbibery while listening to the loons, interceded by the occasional white-throat who hadn't yet fallen asleep. I was in bed perhaps by 10pm as I wanted a head-start on my next day's destination...Cherry Lake.

My pen dedicated to my log book ran out. I had no spare. 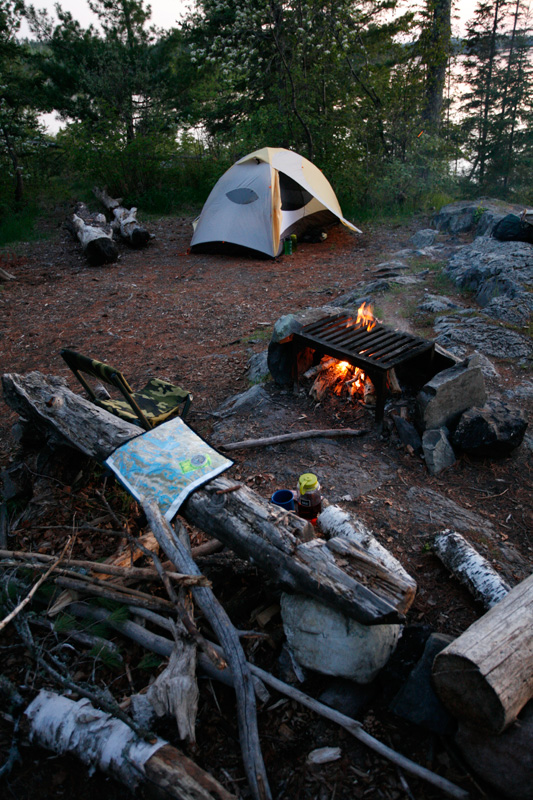 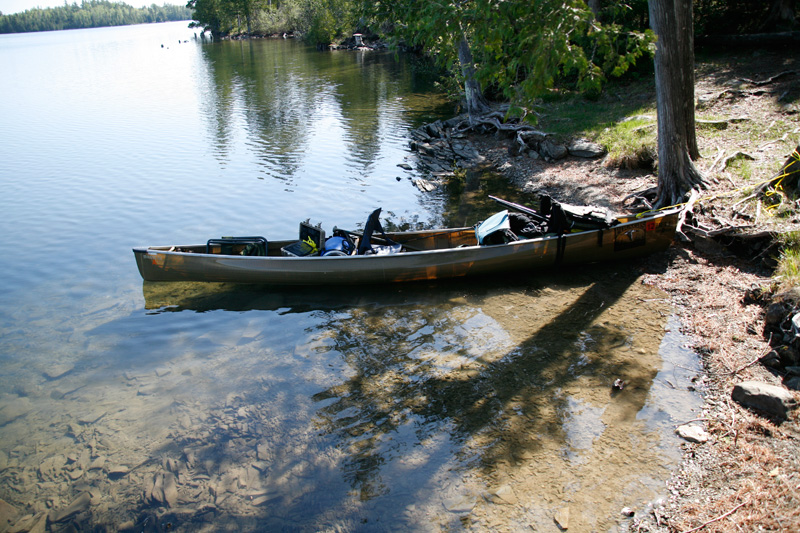 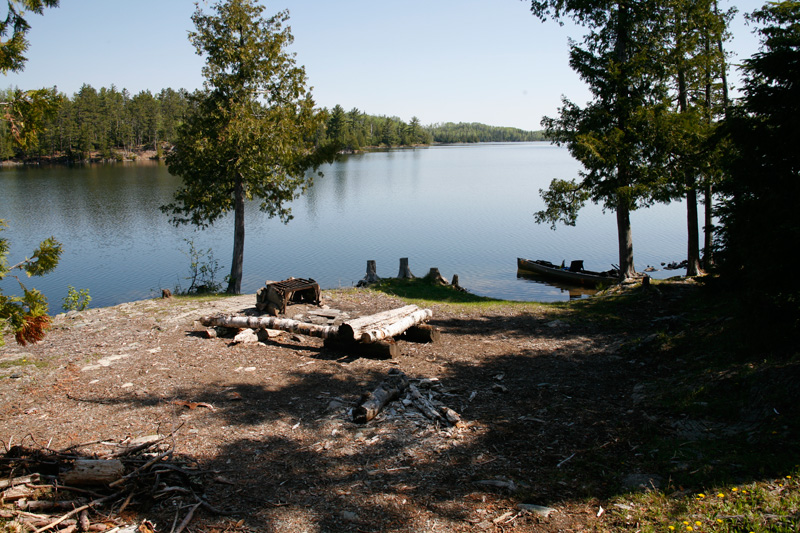