10 days in the Q, One of Many Blessings
by Oneofmanyblessings

Trip Type: Paddling Canoe
Entry Date: 07/25/2010
Entry & Exit Point: Quetico
Number of Days: 10
Group Size: 6
Trip Introduction:
My second adventure to Quetico, in as many years, started the day we returned last year. As Im sure is the case with many, I was already dreaming of being back in paradise before I was unpacked. Gods country. Truly a gift from God to show us His glory, might and love. It was me, my 11 yr old daughter and my 11 yr old niece, my buddy Frank and his two boys, 12 and 14. They are the veterans. Frank has been coming here for 26 yrs. I just couldnt make it happen until last year though. I needed to make up for lost time. Months of dreaming and planning, buying a new tent (Kelty Gunnison 4) and backpack( external Jansport, ebay $35) and water filter (Katadyn Vario, REI 20% member coupon and $40 gift card for opening a REI credit card) leaves me the night of the trip totally unprepared. I have been too busy writing mortgages for clients to even stock up on Senkos, respool my reels or pack a tackle box. So its off to Dicks at 8 pm the night before the long ride. They are out of the colors I want, so I settle, knowing my trip partners say they are well stocked. After a fitful nights sleep, we are off at 5:30am in the rain. Its a pretty uneventful trip from Chicagoland arriving at the ranger station at French lake at about 6:45pm Saturday. We made pretty good time despite the downpour the first three hours. We get checked in and buy our permits and fishing license, oops, forgot my outdoor card. Im going to get charged another $9. Not too big of a deal, the bigger deal is the license is for 8 days and we are staying 10,. We forgo being able to fish day one, knowing we are having steak for dinner, and the last day since we are bugging out. After all that, I dont see the extra $9 charge on the bill. Thanks. We set up camp at the campground at French Lake, do a little exploring and turn in.
Discuss Trip: View Discussion Thread (10 messages)
Day 1 of 10 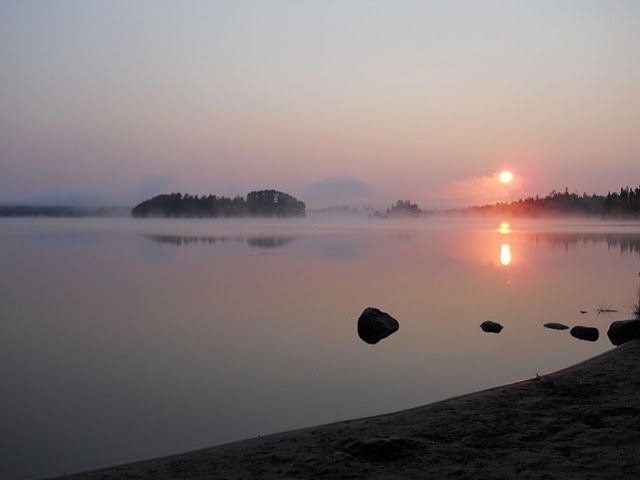 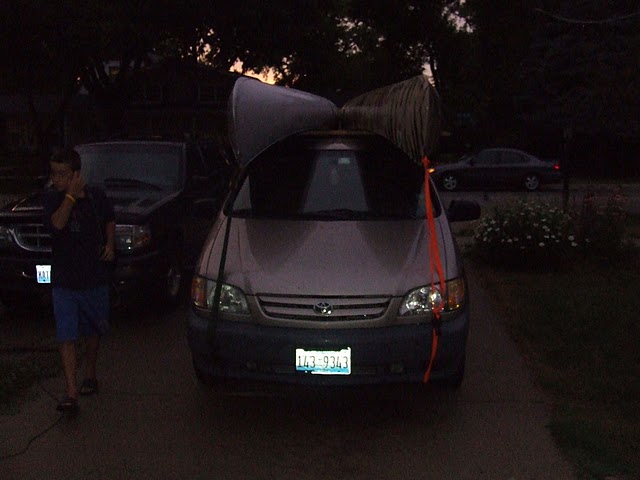 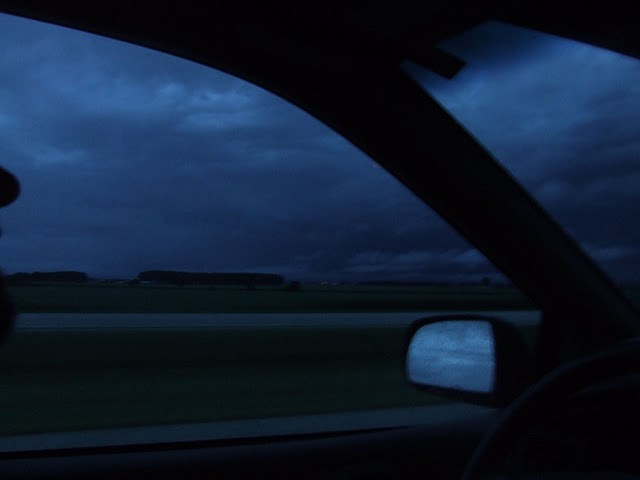 Day One 7/25 Six a.m. wake up call gets us paddling by 7:15. I had wanted an easy trip, a few small portages and exploring the Rawn area and the west end of Pickerel and all the islands. The boys have their heart set on Chatterton falls which we didn’t get to last year, so after much discussion and pleading, I give in. I’m in for the long haul. Which is really ok, just don’t let them hear that. That is the adventure of Quetico. Exploring new areas and seeing what’s around the next point. And speaking of that, when we made it out of the river into Pickerel, in the first bay to the right, we see what looks like a couple stumps in the far distance near shore. We all contemplate if it could possibly be a moose. We can’t find the binoculars and decide it’s just a stump. When we start paddling on, I keep looking back and the stump looks a little different. It’s still early, so we decide to take a closer look. 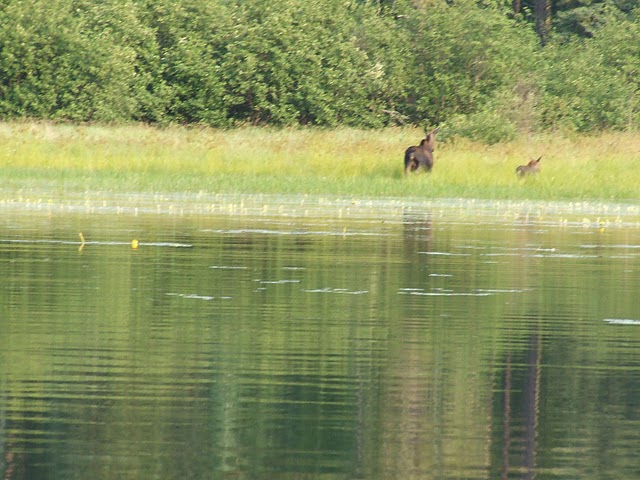 Sure enough, as we get closer, the forms animate. It’s a cow and her calf. What an incredible way to start the trip out. We end up drifting a little too close, and they take off into the bush. Off again as we press on towards the portage into the B lakes 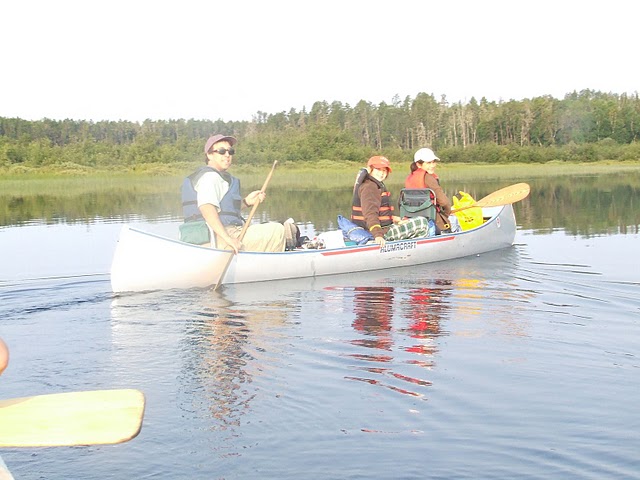 Since I have the young girls and it’s my niece’s first time canoeing, my back was screaming by the time we made our first campsite trying to keep up with the other canoe with its three experienced paddlers stroking with military precision. I would get 3-4 strokes from some of my crew then they’d rest or wipe off the blade of the paddle so it didn’t drip on them when they changed sides. LOL. The other canoe had a good laugh at some of the strokes of my crew and my sweating it up in the back. So by the end of the trip with Uncle J shouting, “DIG,” as I tried to keep us from being blown sideways by the wind and waves ( my steering needs some work), I am sure I was a little disliked. I can’t complain too much about them, though. They dug in when we really needed it later on. After we worked our way down pickerel to the B lakes, we met a local and his wife at the dam and asked how the portage was. “Oh it’s a nice one, aye”, he says. His arms are almost a big as my legs. After doing that portage, I would hate to see what he thought a bad portage was. 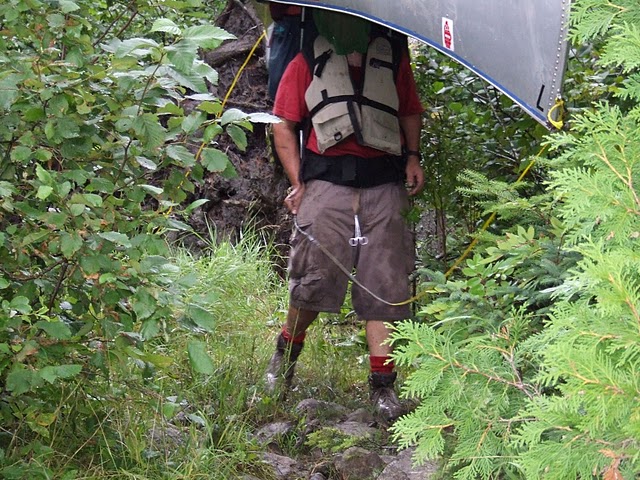 The area is beautiful with falls and rapids and change in elevation, so that helped it go by more quickly. We had to double portage: I face planted with the canoe on my back and got stuck for awhile, trying to get my back pack off which was tangled in the canoe and my fishing poles. That must have been a sight. The girls really pulled their weight without any complaints. The boys were like animals and kept coming back for more and to help, thankfully. 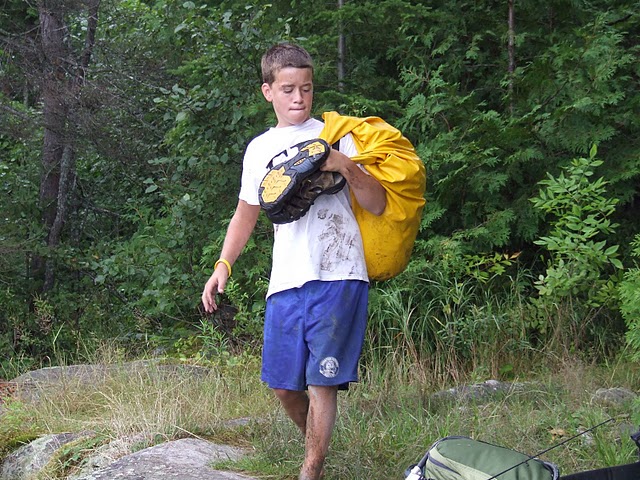 The other little portages through the Bs were easy, with lots of blueberries to snack on. We made it to Fern and camped on the island after the falls before we tackled the long portage around the river and rapids to Olifaunt. 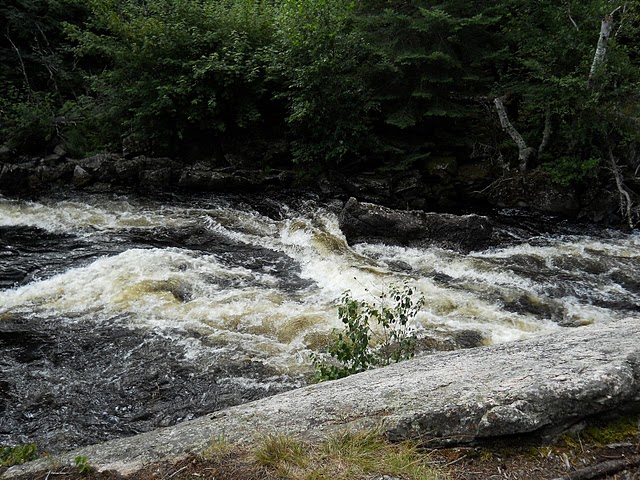 It was a nice site with good swimming which was a relief for the sore muscles. 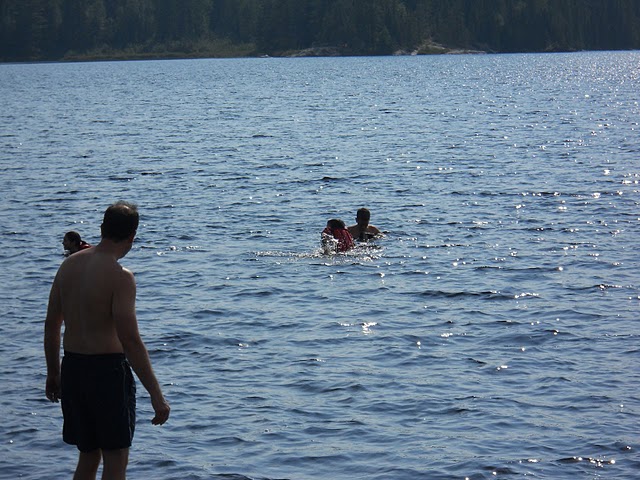 I found a pair of sneakers that someone forgot lying in the sun. They fit. 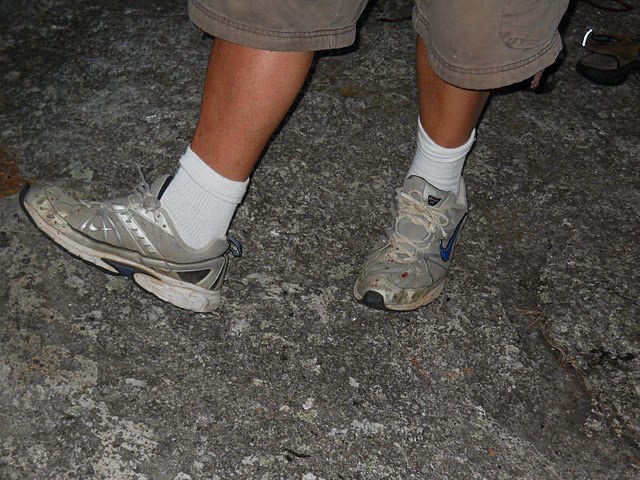 So I had a pair of dry shoes to wear around camp while my boots dried out. That night we had our steaks and potatoes and fresh green beans. Because my buddy forgot a few utensils (and his underwear), we had to improvise. 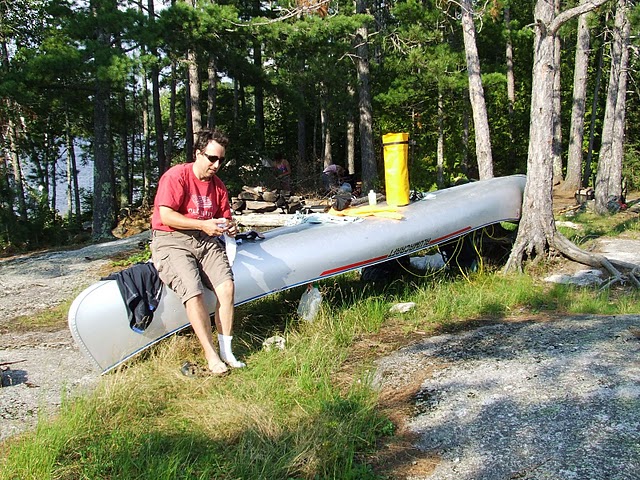 My niece used a hair band and a pair of sticks to make a set of tongs Bear Grylls would be proud of. The boys wrapped a bunch of sticks with tinfoil and criss-crossed them over the fire for a temporary grate. As our bellies filled, the packs sat a little lighter. 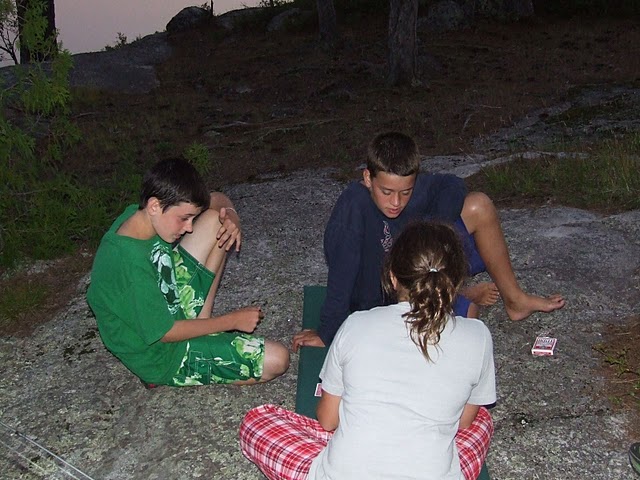