Trip Type: Paddling Canoe
Entry Date: 06/19/2010
Entry & Exit Point: Mudro Lake (restricted--no camping on Horse Lake) (EP 22)
Number of Days: 7
Group Size: 5
Trip Introduction:
What: First trip to BWCA Who: Dean, David, Kraig, Shane, me Where: Mudro Lake, Fourtown Lake, Boot Lake, Fairy Lake, Gun Lake, Gull Lake, Thunder Lake, Bullet Lake, Moosecamp Lake
Discuss Trip: View Discussion Thread (5 messages)
Day 1 of 7
Saturday, June 19th, 2010 Mostly cloudy, scattered showers, mid 60's Woke up at 5:30am, finished packing. Breakfast of scrambled eggs, bacon, and french toast in Ely. Stopped at Spirit of the Woods for a pound of leeches and the permits. Driving the Echo Trail, started off as a nice road, then turned bumpy, then turned to dirt and gravel. The parking lot at the entry point was crowded, close to 30 cars. Unpacking and the first portage to the Mudro entry point went well, no lost gear, no canoe mishaps. The first paddle was along a narrow channel in the weeds. We hit a few rocks. The opening to Mudro lake was really cool, exactly how I imagined the lake would look like. The wind was low and from the north which created a mild crosswind. The trip across seemed to go quickly, next thing, first real portage to Fourtown. Mudro had a little rock dam with driftwood and a little stream waterfall next to it. The portage was easy, lots of little rocks. The long portage was very difficult, alot of up and down hills, lot of steep rocks. We thought the portage was the hardest part but the wind was coming from the north to NW, the paddle up Fourtown was very long as well. Approaching the exit of Fourtown we saw a bald eagle in a tree right along shore. We almost got close enough for a great picture. The portage to Boot was short and wet. Boot was a very pretty lake, a couple great rock cliffs. The first part heading west was a little easier, not a lot of wind. After making the turn to the north it was into the wind again. The portage to Fairy was easy too, although the packs were feeling heavier. Fairy is a very pretty lake with the big island. We were disappointed to see canoes at our target campsite on the east shore. We stopped on the western campsite to snack and discuss options. Dean’s suggestion was a couple more portages to Gull through Gun. We ran into some rain showers on Fairy and Gun. When we approached the exit on Gun we decided to either stop at the north site or see if the first site on Gull was open. Dean went across the portage and found the site was open so one last portage, finally. The site was a great choice, open, breezy (no bugs), lots of rocky shoreline, a peninsula point, a great “kitchen” setup, and a great view. We work for a while to get tents and tarps set up, then finally some fishing. After that many hours paddling and portaging, I’m ready for a couple hours of relaxing shore fishing. I catch and release a 10” smallmouth and another about 8”, both on slip bobbers and 3” black minnow grubs. After a while Dean and David return from canoe fishing, time for dinner of steak, garlic mashed potatoes. Boy did that smell and taste great after a hard day. Soon after that it was time for bed. I slept like a log, earplugs worked well! Fish count: 2 smallmouth 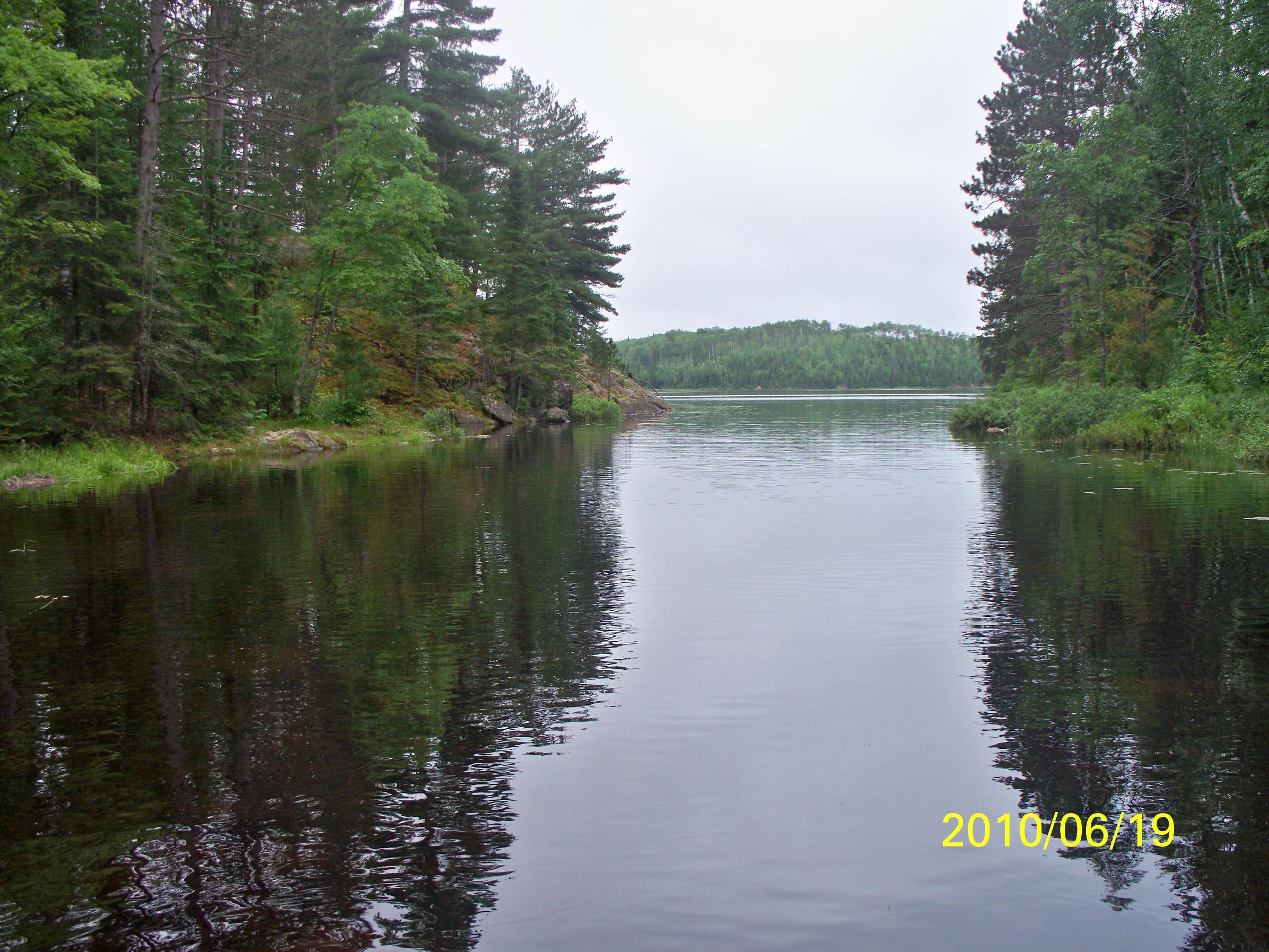 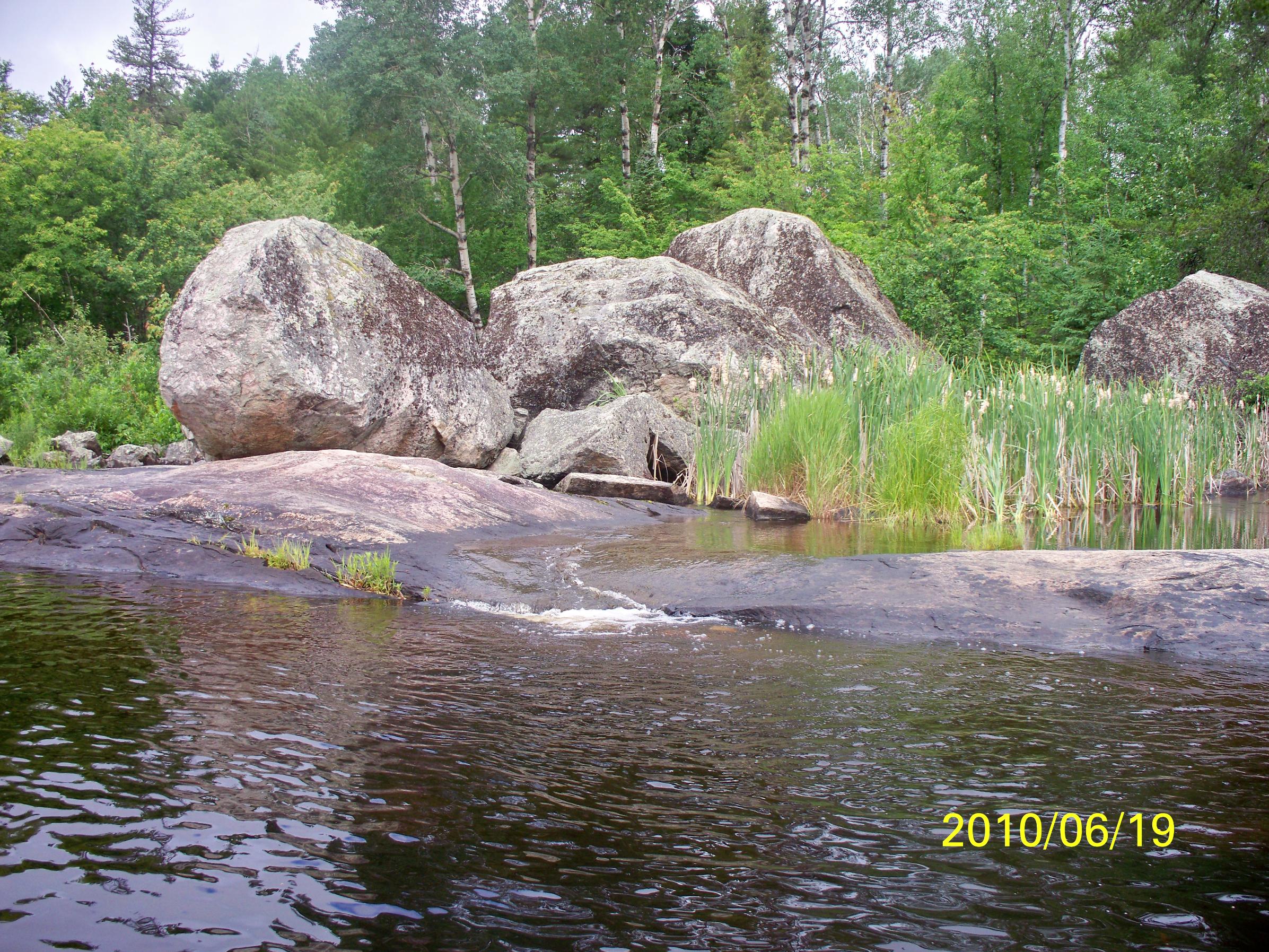