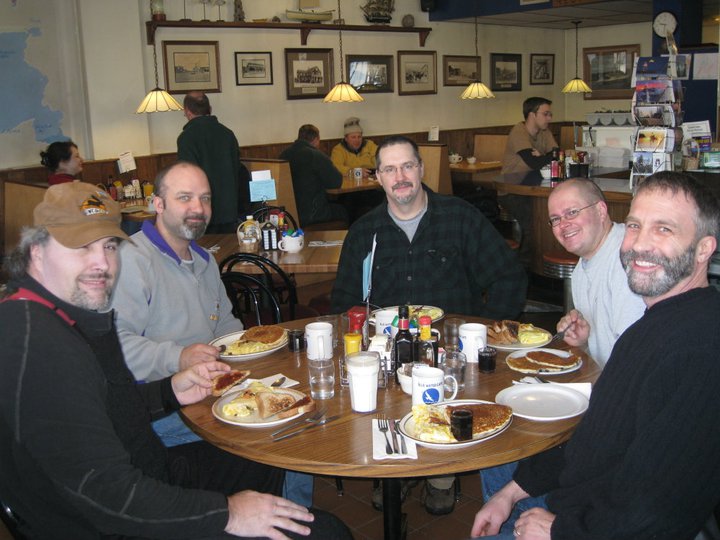 We stopped downtown for a hearty breakfast before departure. We posed for a pre-trip group photo. Hoping it wouldn't be the last known photo of us alive :) As forecast, the wind had died down & was barely noticeable even by the lake. A quick stop at the Holiday station to top off our tanks and grab a few last minute items, & verify the latest forecast. Then we were on our way.
The Arrowhead trail was wide open & well plowed. Virtually any vehicle, driving sensibly, could make it up to McFarland lake. The roads down to the boat landings on McFarland & Little John were NOT plowed. There was a very nice cleared out parking area with room for a dozen cars or so located just before the bridge which crosses the small stream between the 2 lakes. This lot also would provided direct access to the Border Route Trail as well. There was a smaller lot further back the Arrowhead trail which apparently served those heading for South Fowl. 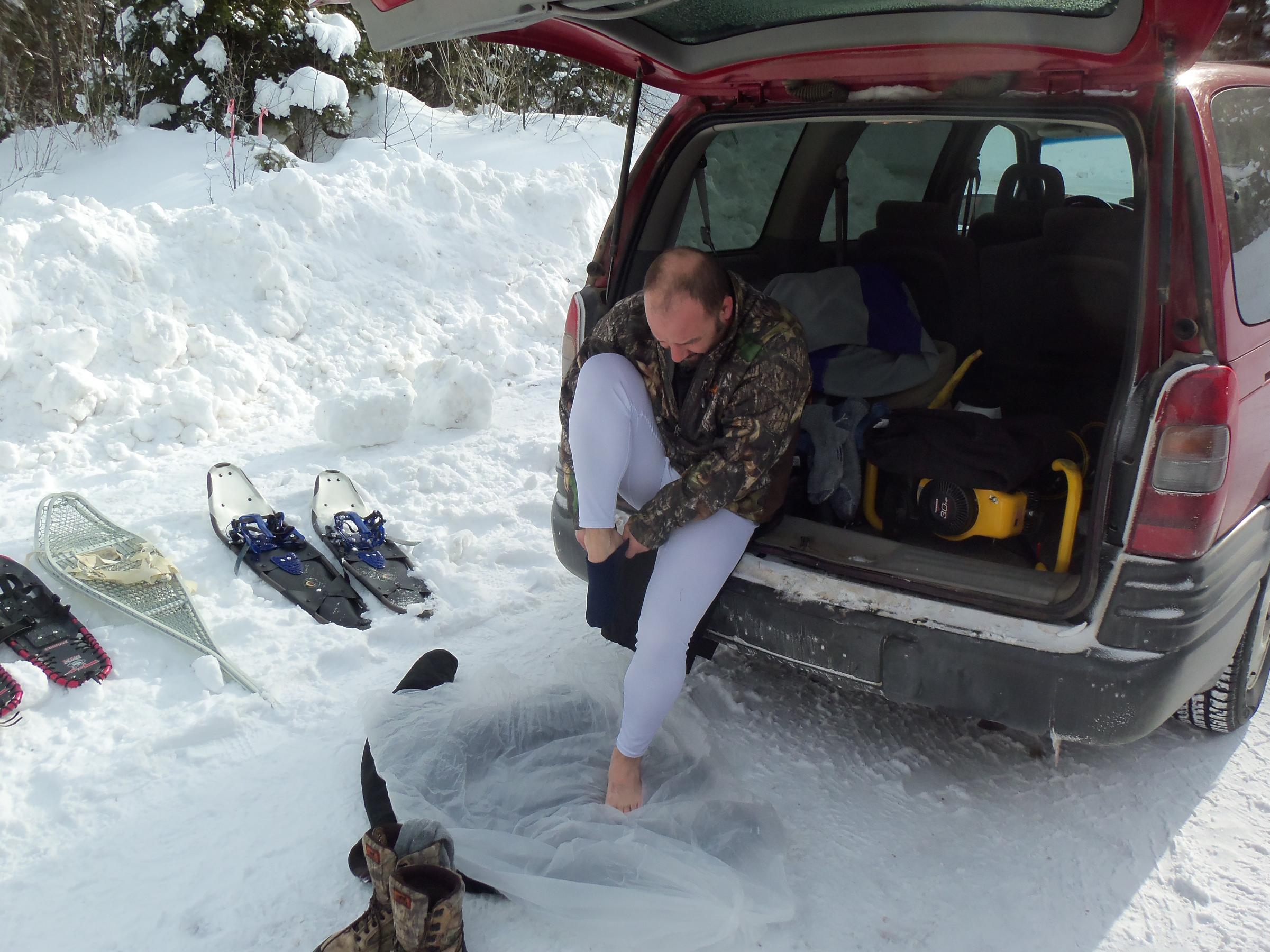 We finished gearing up & started loading/lashing our sleds. There would be about an extra 300 yard or so walk down to the lake. It appeared there was also a snowmobile trail running out onto the lake. We hoped it would run all the way to Pine? Since there were 3 scout leaders among us us it was determined that Mark be designated our patrol leader. This would be a dubious title. Honorary at best, as no one would really listen to his advice anyway? :) Only reminding him of the title when there was something that needed to be done that no one else wanted to do. And right now that was breaking trail. Which actually wasn't so bad with the snowmobile tracks. 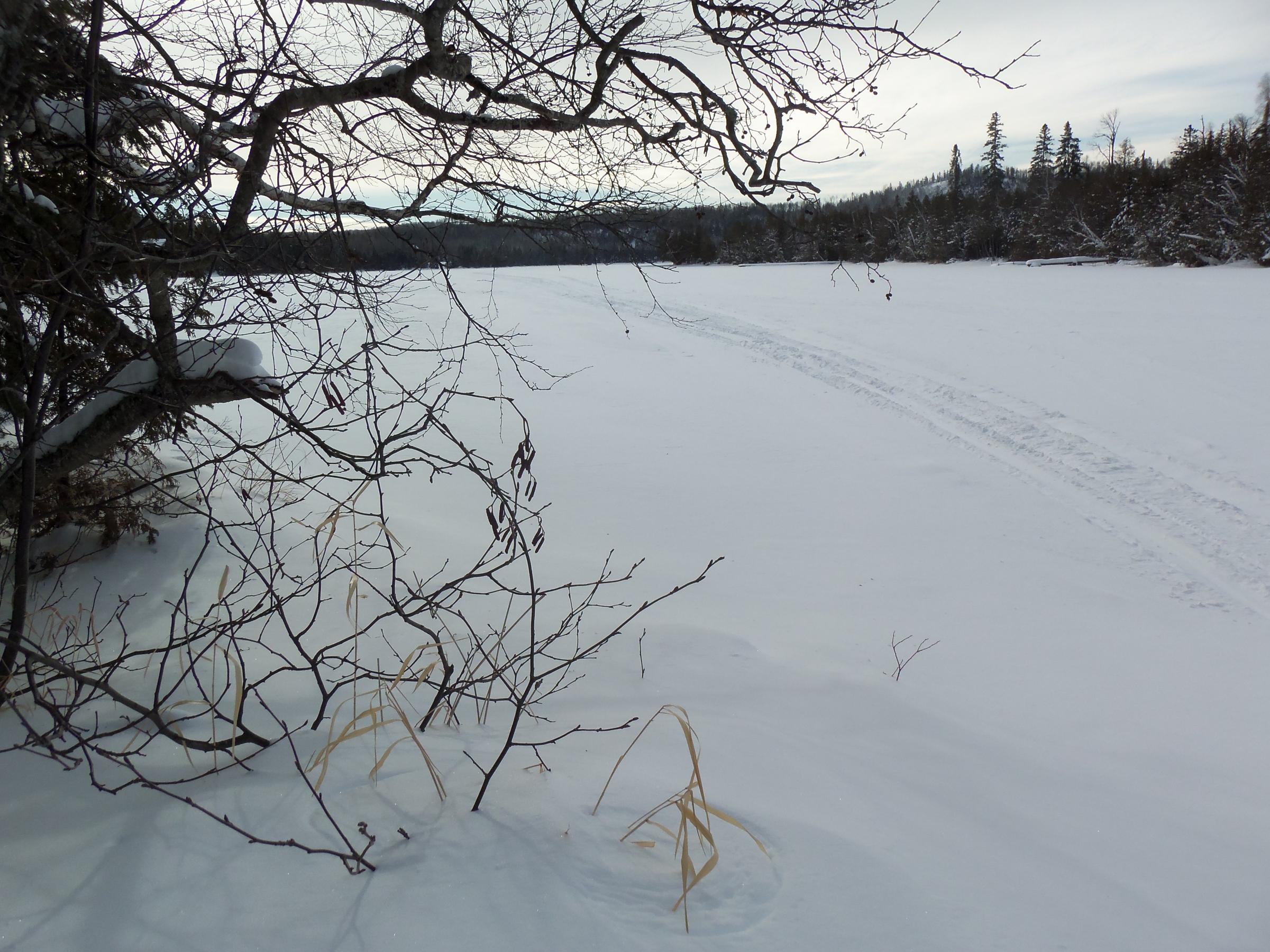 Soon we were out on the lake. I had a little trouble with my sled being tippy. Taking the auger & ice chisel off the top of the load seemed to do the trick. There was some minor tweaking by various sleds after that, but for the most part we were making good steady progress. As expected, it appeared the snowmobile trail headed for Pine lake. 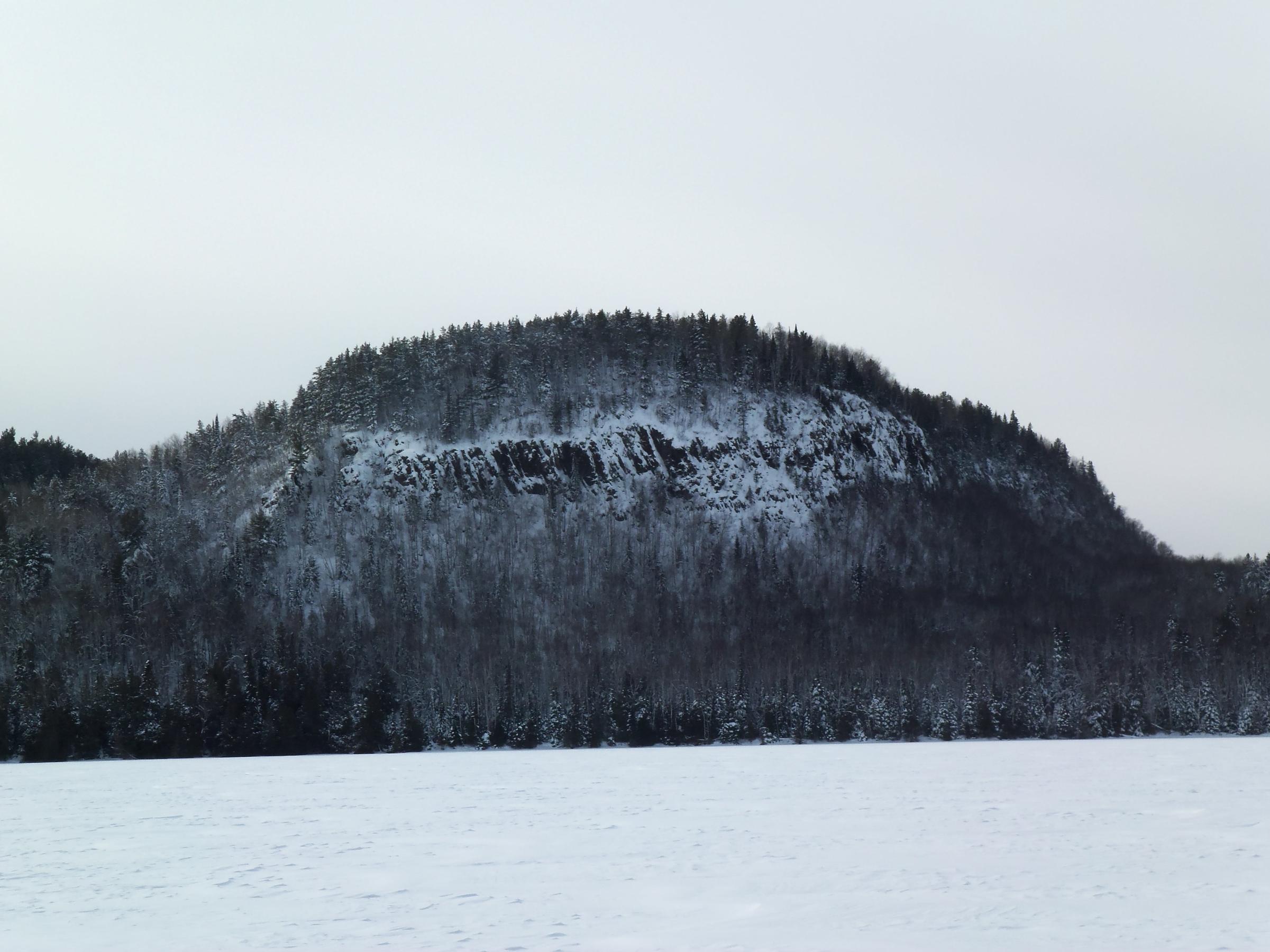 The cliffs and peaks of the nearby hills provided an awesome backdrop as we trekked across the lake. Unfortunately the snowmobile trail veered to right (north). We planned on camping near the east end of Pine lake. And expecting open water near the small creek running in from Pine. We were hoping to be able to cut across the long peninsula between the lakes somewhere before reaching that creek. There was thick impassable underbrush along the length of the peninsula. We came up to the creek from the south side of McFarland. 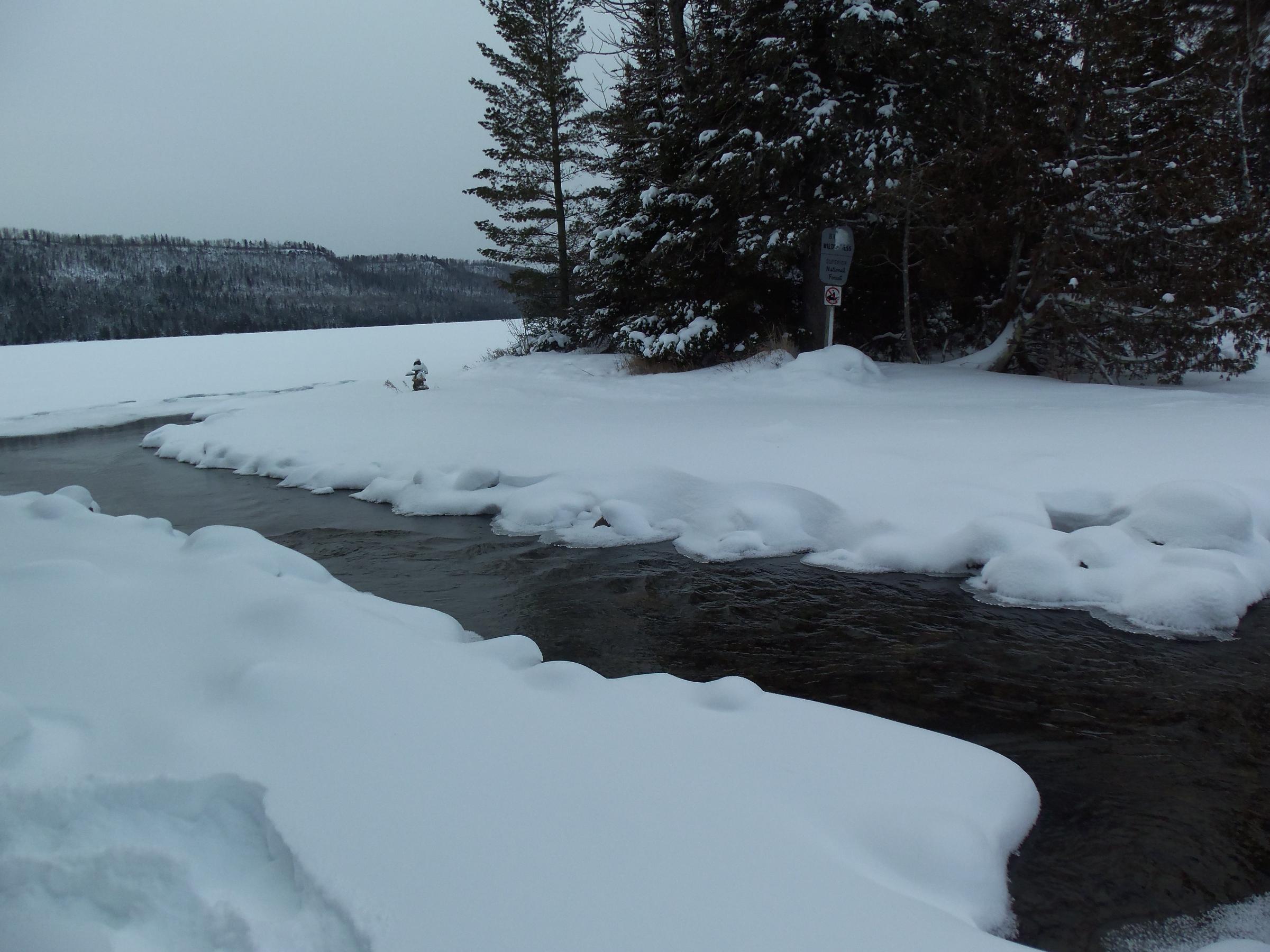 We walked along the side of the creek out onto Pine. From the Pine side the portage trail was more appparent. With a little minor clearing & grooming we were able to pull our tobaggons through without too much trouble. The only obstacle was a downed tree that we had to crawl under right at the top of a small hill. 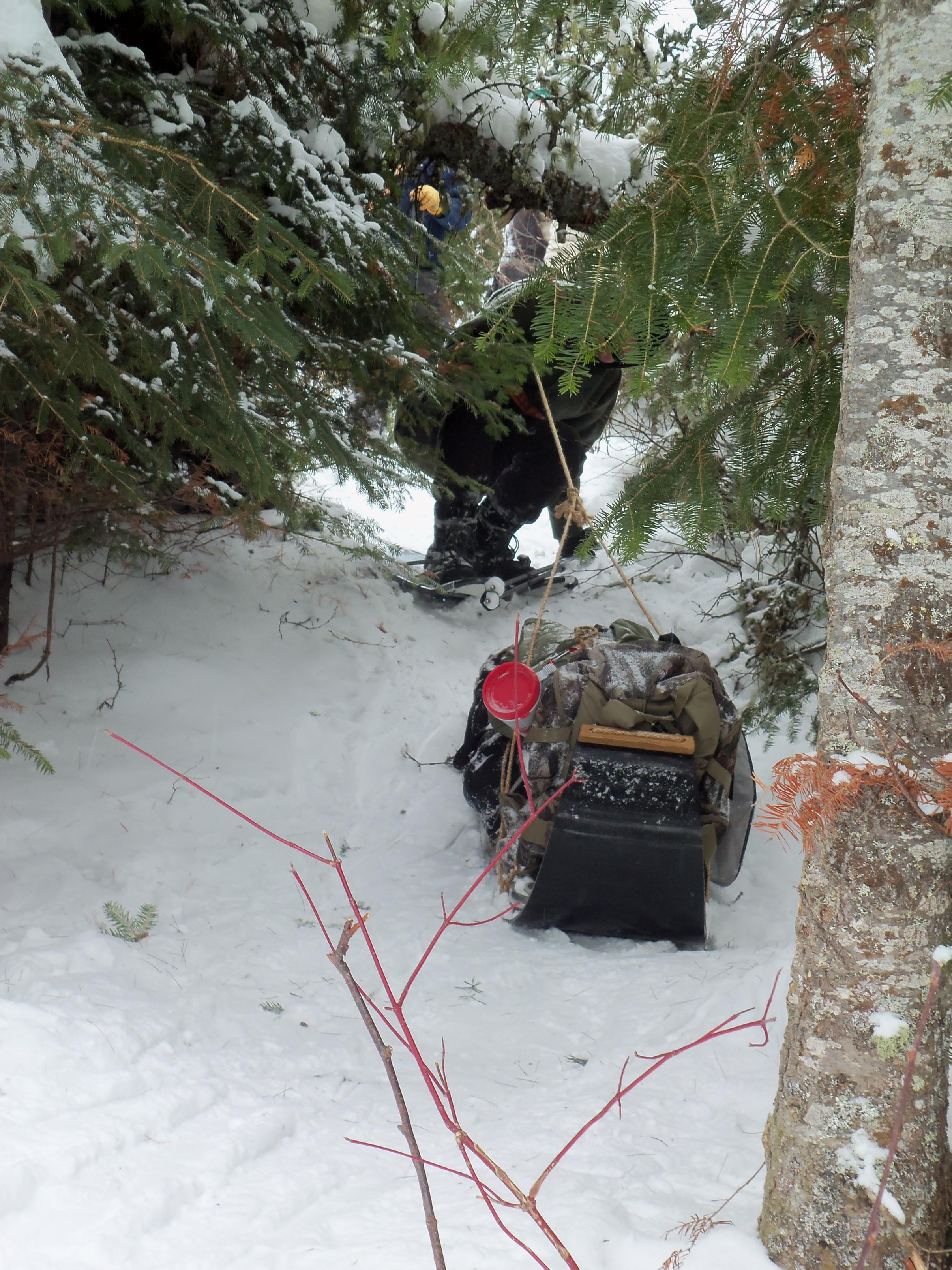 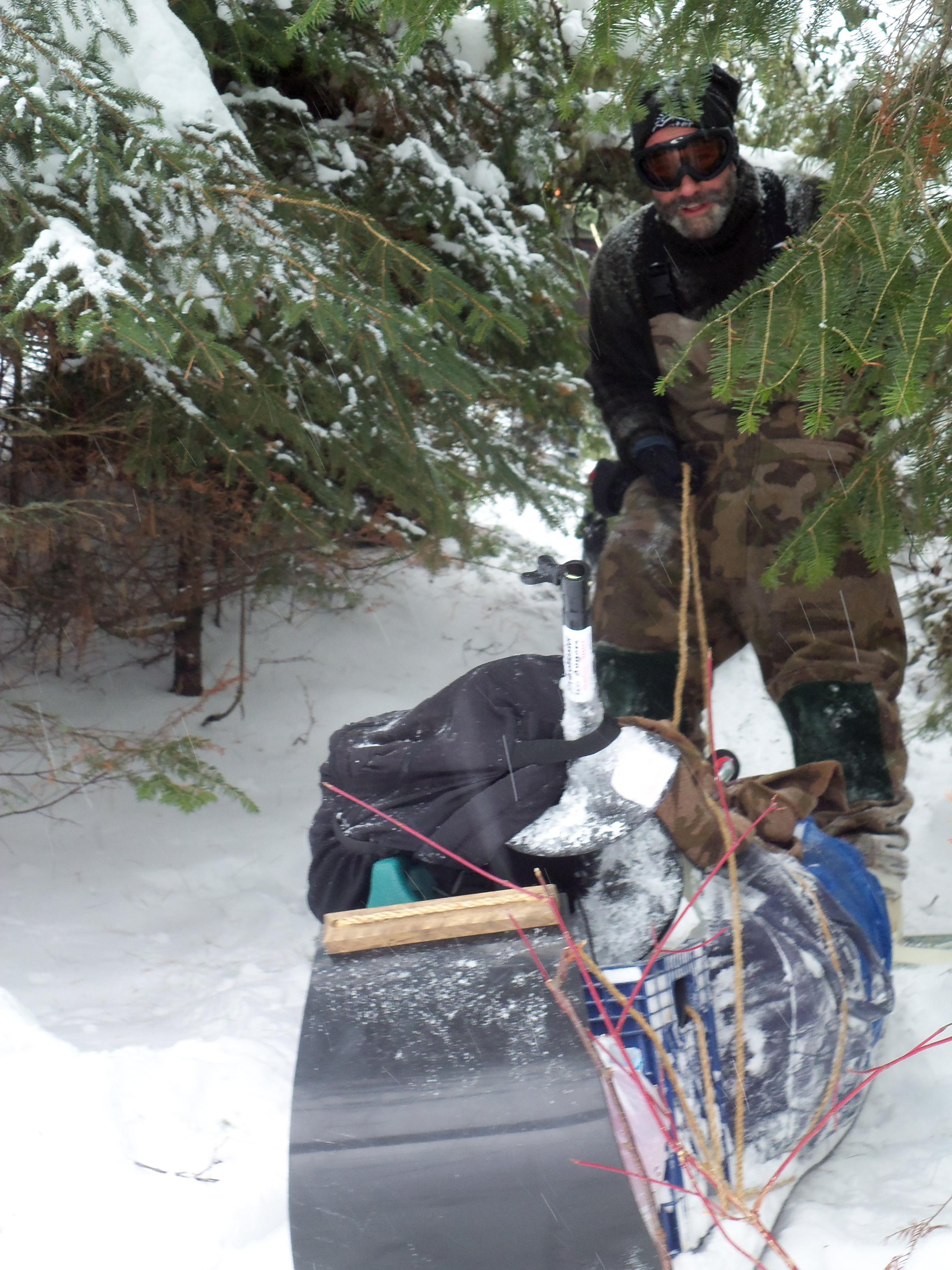 By the time we reached Pine a little snow was starting to fall. Also I had discovered a few minor issues with my digital camera. 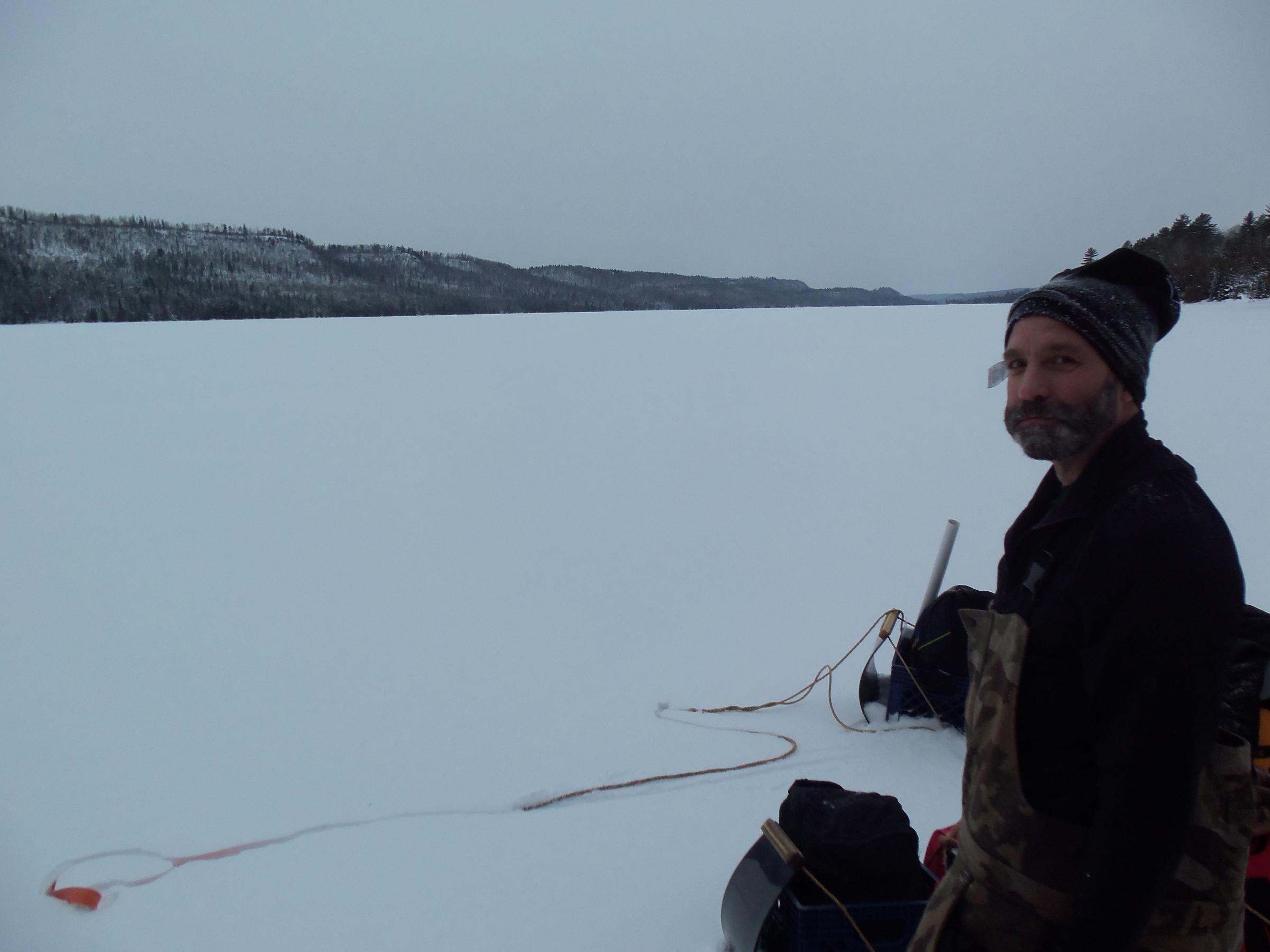 I found that in order to keep it working properly I couldn't let it dangle from my neck while in it's pouch. I had to tuck it under the top of my wool bibs close to my chest to keep it warm enough to operate properly. And I couldn't keep it exposed for more than a few minutes at a time. I also decided that I would keep it in my sleeping bag at night as well.
Unfortunately we arrived too late in the day to properly complete a quinzhee before dark. Which, for me, was one thing I had really wanted to experience. Vivid recollections of the brutally raw wind from the previous night were no doubt still fresh on everyone's mind. So it was agreed to find a spot back in the woods a bit where we would be afforded a little more shelter from the elements. John had sewn together a canvas lean shelter which he had brought with. So once we determined a suitable site? John, Scott, & Mark went about setting up our shelter. While Keith & I started searching for, then cutting up, firewood. 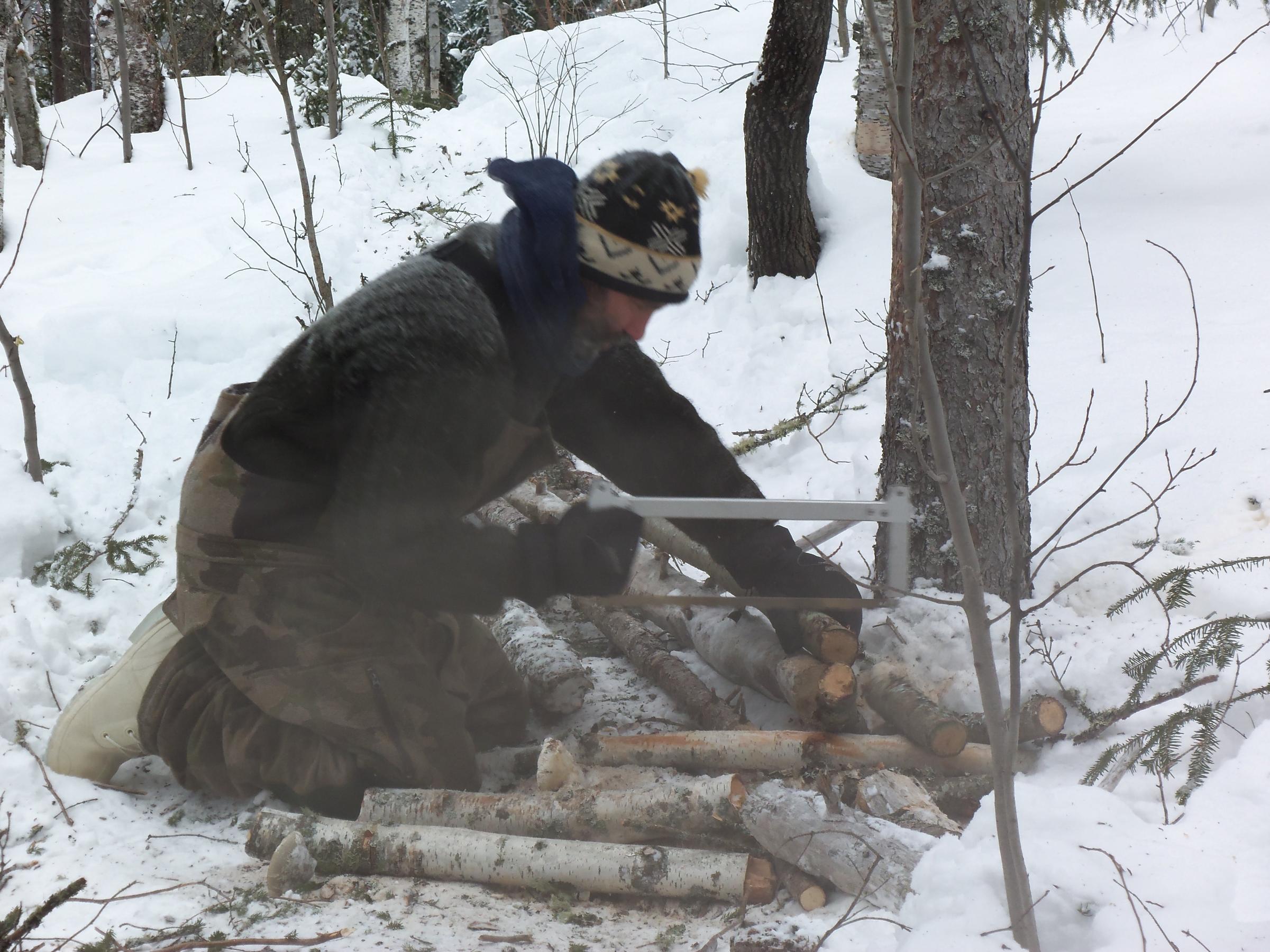 Once camp was setup & we had a small cache of firewood. The next order of business was to get supper started. That's where our patrol leader Mark comes in once again. He had brought his dutch oven along. This was what we would use to do a good deal of our cooking. On the menu tonight was venison stew & biscuits. 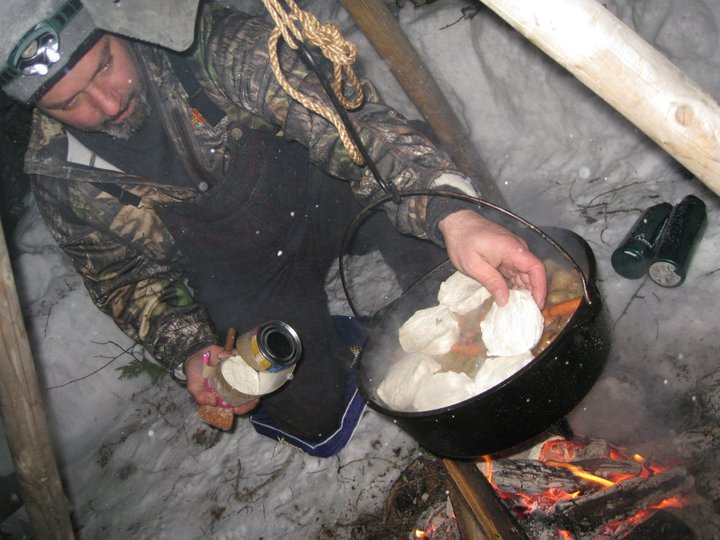 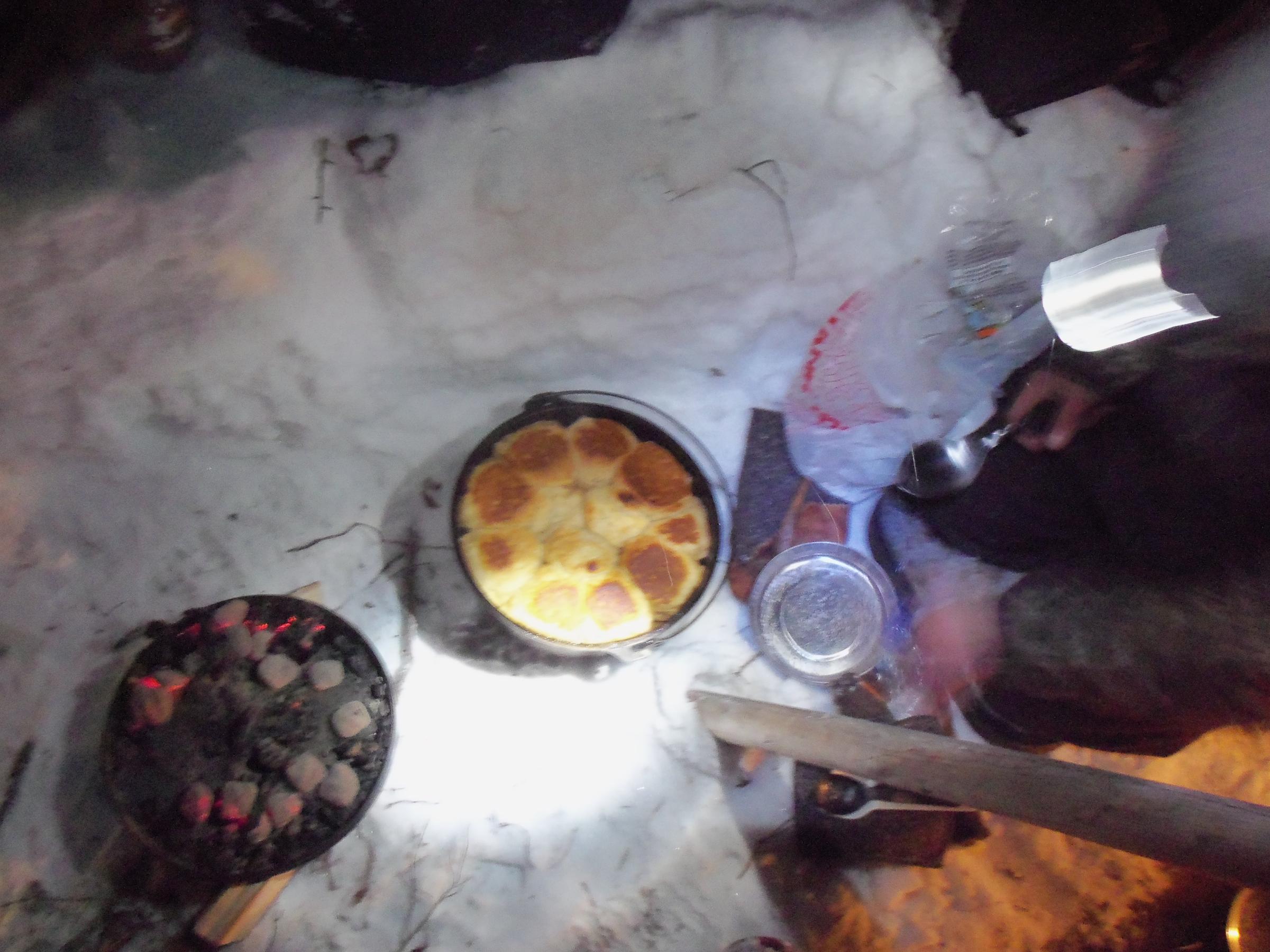 The stew was a little more the consistency of soup. But never the less tasted great. The dutch oven made great food. But one drawback we immediately noticed was that it took so long for the food to be fully cooked. Especially when everything was frozen rock solid! Also the tri-pod we used to hang it from took up valueable space around the fire. Which was at more of a premium as the sun went down and the temperature started to drop. We were able to manage. But, looking back. We should've opened up a larger area.
After supper we each had a few hot beverages and enjoyed the camraderie around our campfire. It would not be a late night for me. The energy expent getting here then tending to the necessary various camp chores had worn me out pretty good. I filled both of my water bottles with boiling hot water. I then stuffed those in my boot liners and put them at the bottom of my sleeping bag. For sleeping I wore only a balaclava, my under armour top & bottom, along with my wool socks and vapor barrier socks underneath. Sure felt nice to have heat down by my feet. I was asleep in no time. 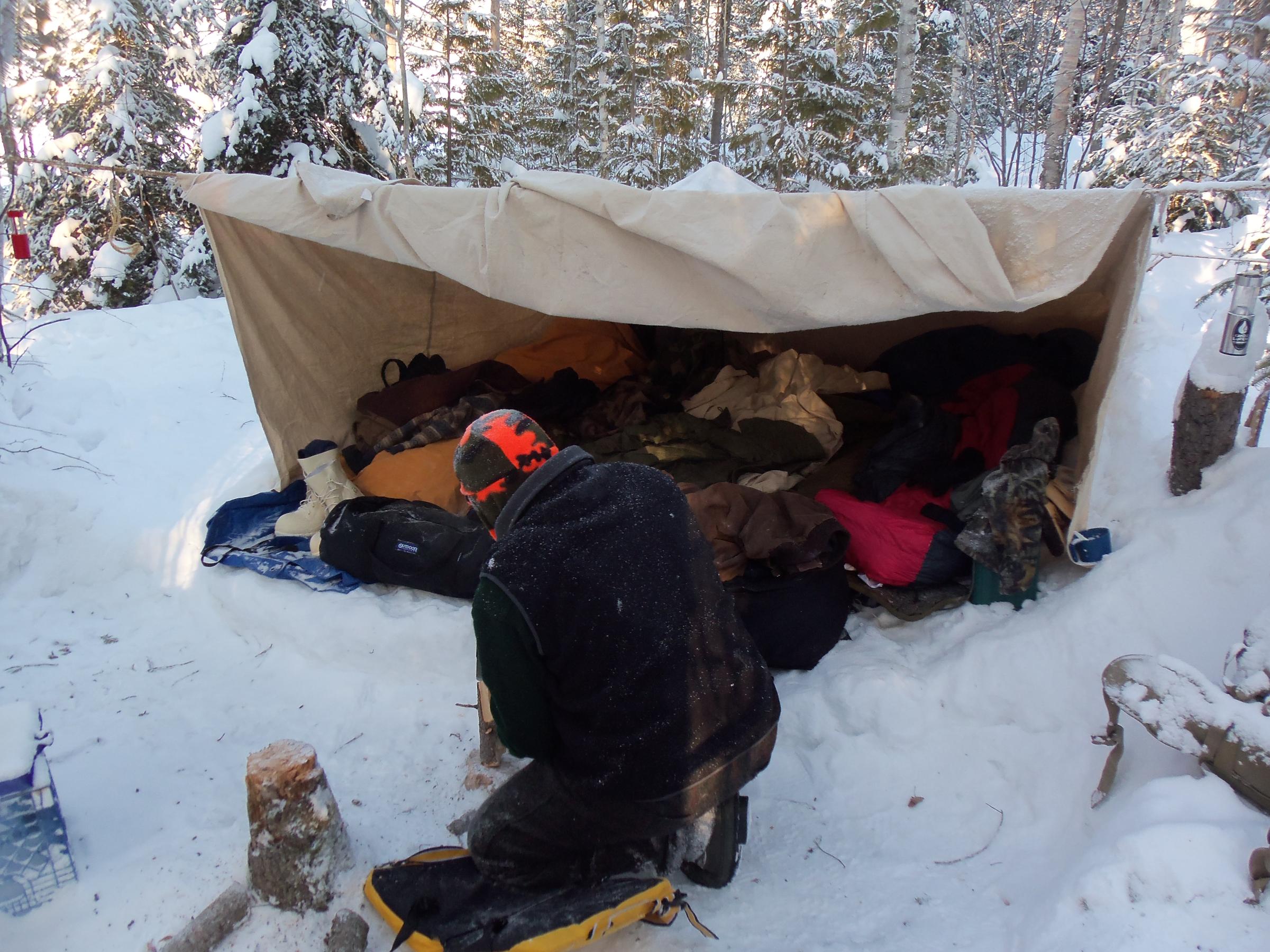