Friday morning my alarm went off at 7:00am and I started loading the 3 sleds into the truck. I let my partner sleep in because he wasn't feeling well the night before, and I printed off my Math Homework. It was a warm February morning for Duluth standards, but yet What was I thinking rounding up a few of my friends and venturing into the BWCA during the winter; a place we had never been; to fish for something we have never fished?

The sense of adventure was too great, and the hope for Lakers drove our hefty ambitions and so we Hoped in the truck around 8:40 and stopped by school to drop off my assignment. By 9am we were on the way to pick up the rest of the crew in Duluth. On the way north We Grab a greasy double cheeseburger for breakfast at Culvers in two harbors.

We Rolled into Grand Marais in the early afternoon and filled our permit at the ranger station. According to the ranger there was "a little slush on some of the smaller lakes, but the larger lakes were fine"- Great we thought, travel would be much easier! We then headed into Grand Marais to purchase rainbows/ ciscos/ and propane.

By the time we make it up the trail to Entry #60 Duncan Lake, it’s around 2:30 and the access is full! At least 4 trucks and a group unloading their vehicles made it apparent that we had picked a fairly popular winter entry point. We pull up and the 5 of us unload quickly.

Although the group ahead of us was much earlier to arrive, we were efficient and, on the trail, only minutes after them. Trailing this convoy across West Bearskin made for slow movement, however we were in no hurry, and having a packed trail was very convenient. Arriving at the portage, and entrance to the Boundary Waters Canoe area, we stop for a quick rest and pictures.- not to mention a few gulps from the bag of wine we were toting along.

The portage from West Bearskin to Duncan was uphill for the first portion, but nothing too extreme. Arriving at the peak of the portage we intersect the snowshoe trail and take a breather. Being in shape still doesn’t account for pulling a sled full of gear while wearing a 50lb pack, and we take out some trail mix and water.

Quickly back on the trail we descend down to Duncan Lake to observe the convoy that was previously ahead of us. Trekking across the frozen lake, the group was directioned for a position I had observed as “ potential fishing territory” on the south end of Duncan and we decide to push on to Rose for solitude and Lake Trout.

Instantly encountering some frozen slush, we fear for the worst and follow a faint trail heading north across Duncan. Turns out the slush on Duncan was only for a few yards near the portage, and travel quickly became more stable. Trekking north along Duncan, we realize that time is going to be limited before nightfall and we need to pick up pace.

Blowing and snowing, the weather turns, the once packed trail from a previous trekker had vanished and it was nearly impossible to follow. It ended up being more difficult to keep the sleds on the previously packed snow portion and they had a tenancy to slide into the “ditch” or deep snow along the sides. Deciding to just blaze new trail, we were significantly slowed and I became extremely exhausted by the time we reached the portage at the north end of Duncan.

Nearing sundown, we took a short water break and descended down the “stairway portage” to Rose Lake, which we had only read about. Truth be told, “this is a Stairway” between two greatly different elevations! Might I also note that this is true during the summer. In the winter, however, the stairway portage is a giant slide that is actually quite entertaining on the way down. Well after lowering the sleds down this steep slope, we finally arrive at Rose. The light is fading fast and we can barely make the shoreline.

Heading East my partner encountered slush nearly knee deep and we had to head back and around at a different rout. Finally after finding a location to set up camp, we are there! Camp is set and we put up the fish houses. Drill the holes and sit down exhausted. The hike was over 3 miles and breaking trail took it out of me. Sitting over 60ft of water, yet only 25 yards from shore, we drop a line and enjoy some spaghetti and stir-fry. Not long after dinner our buddy comes over to our shack with a nice lake trout and we knew it was going to be a good weekend. He throws it back, we roast some smoars, drink some ice hole and bagged wine, and pass out pretty early. 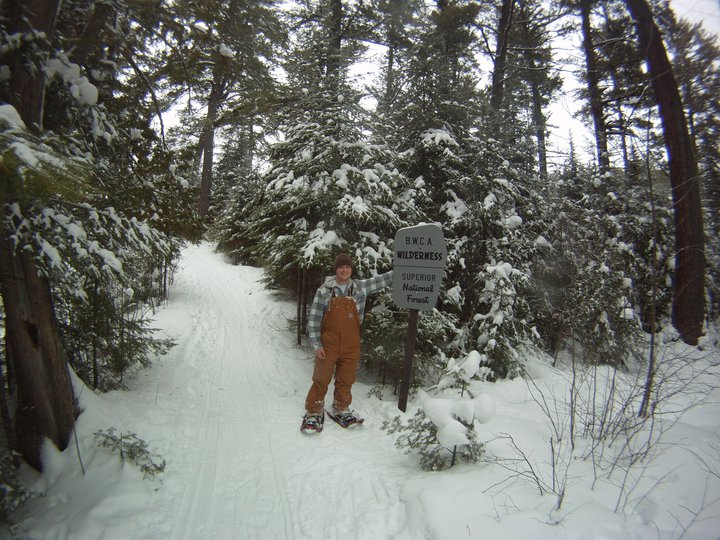 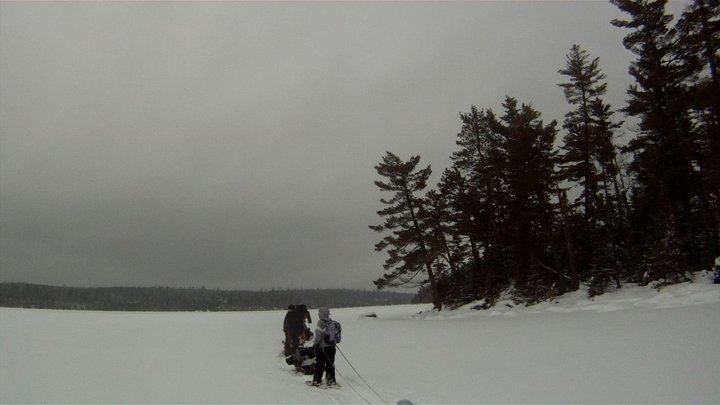 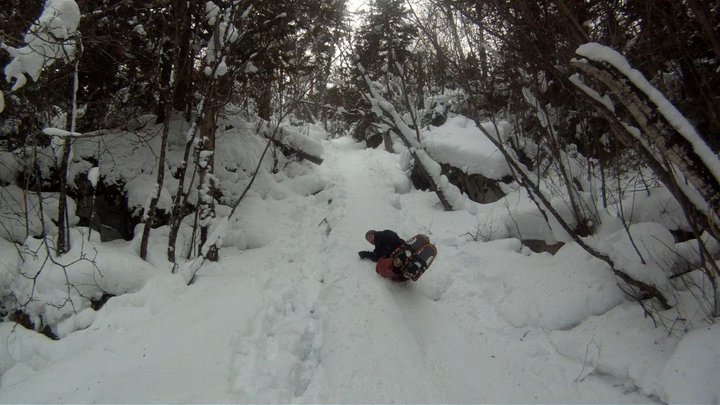