Prisoners on Pine
by TuscaroraBorealis

Awake early for the drive back into Grand Marais to pick up our permit at the Gunflint ranger station. As expected, we arrived in town too late the night before. I've been to Pine lake a number of times in the past & know of it's reputation for wind & waves. So we waste little time in town and start making tracks. There is a light mist along the shores of Gitchee - Gumee which helps illuminates countless spiderwebs along the roadside. 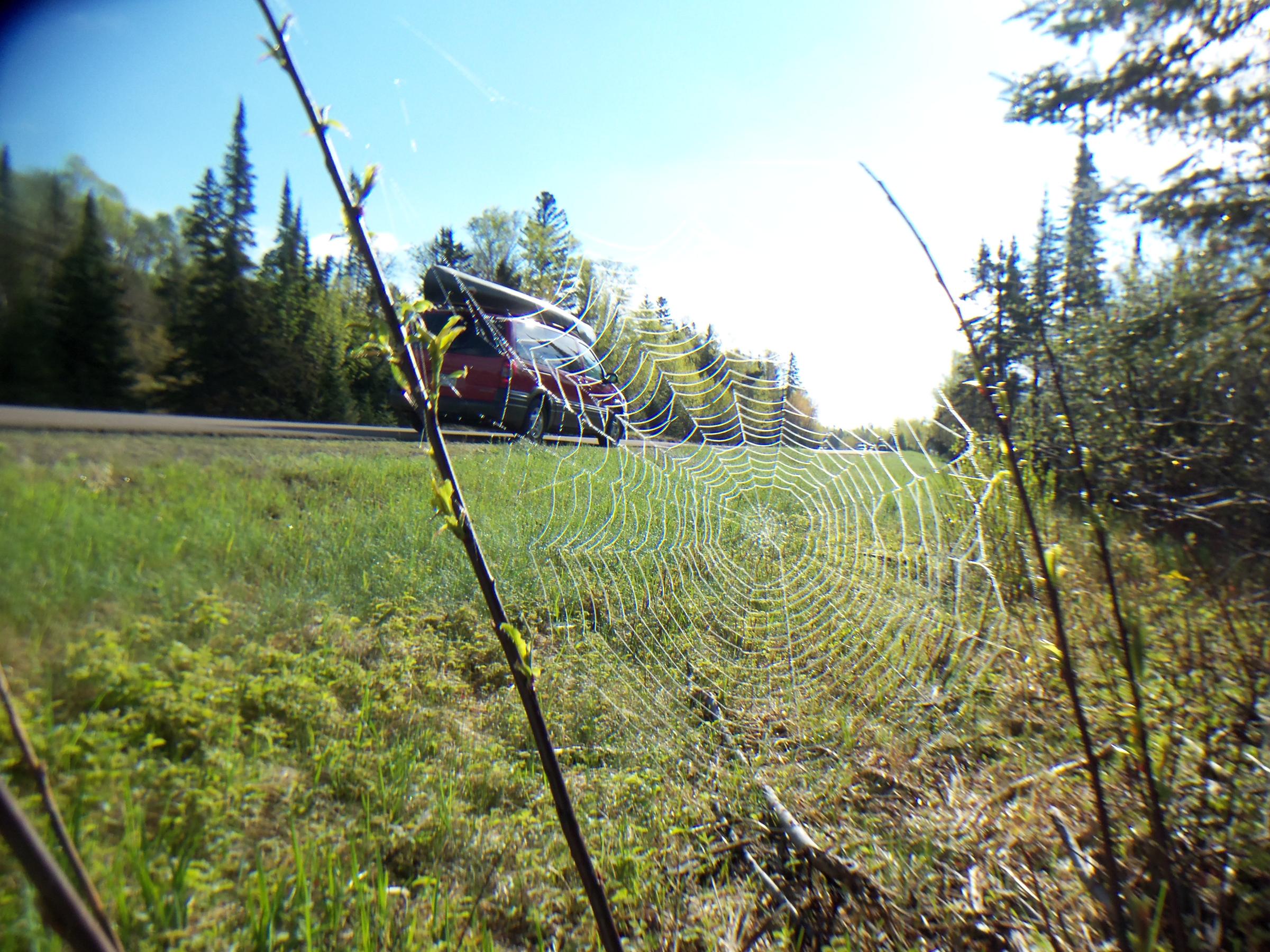 Nothing serious. But, the Arrowhead trail is a bit rough, wet & muddy as we near McFarland. We arrive and push off into cool but, otherwise, ideal conditions.


I had done a winter trip through this very area this past January. And now was being afforded a unique opportunity to juxtapose the area in contrasting seasons. Without the hindrance of wind we made good time to Pine without over exertion. 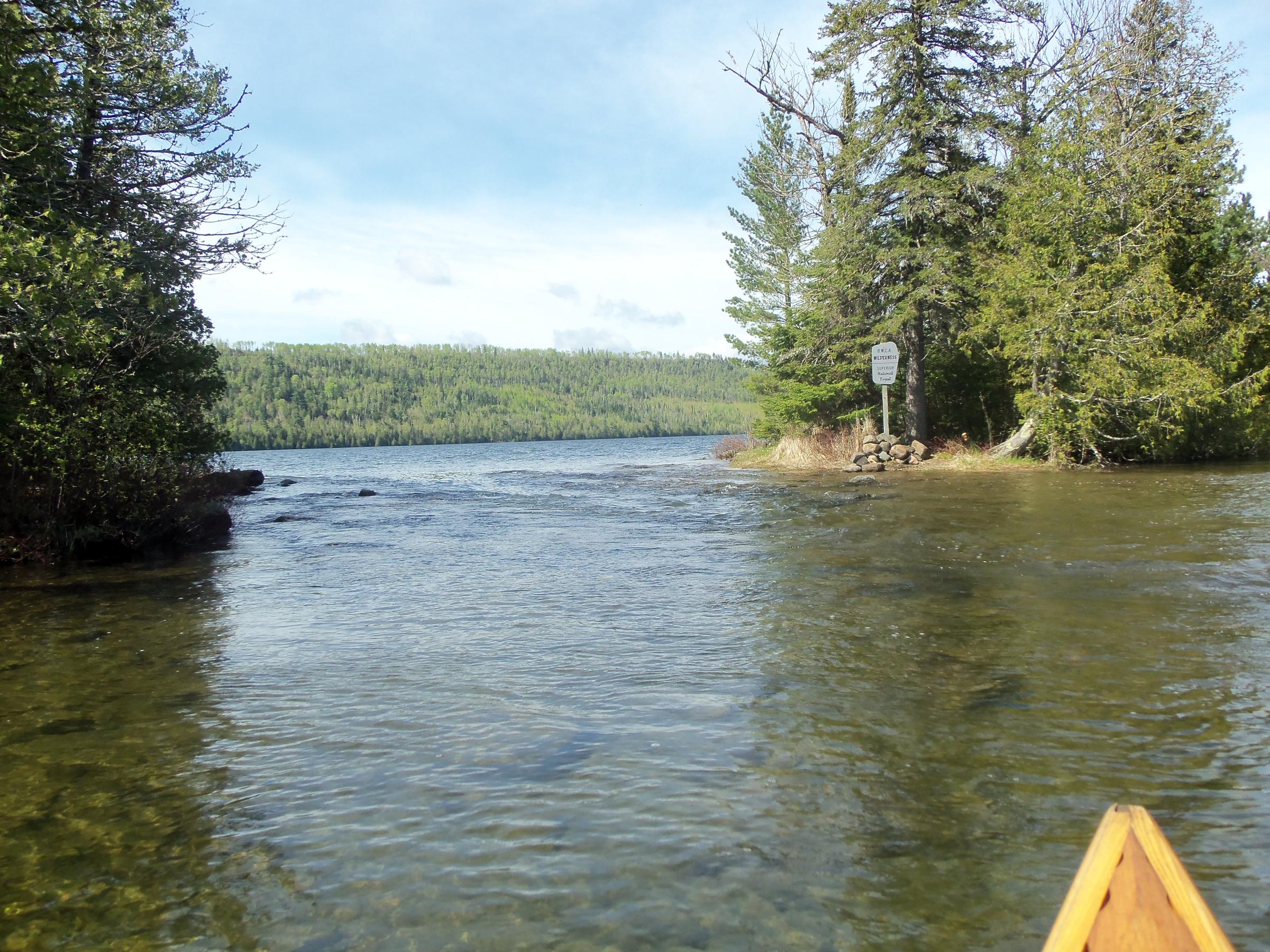 The current was a bit too quick to paddle through. So I did the gentlemanly thing & walked my 2 ladies (Vickie & The Black Pearl)through the cool, swift water. I would think it appropriate that the forest service should employ a band of drummers & trumpet players to be permanently stationed here to play the Hawaii 5-0 theme song. As more often than not the waves I've encountered here on Pine are usually surfable. :) Thankfully, nothing more than a good ole fashion (and very paddlable) walleye chop with plenty o' sunshine overhead greets us today.


Proceeding down the northern shore we stop at the second campsite to the west from the portage to take a quick break. 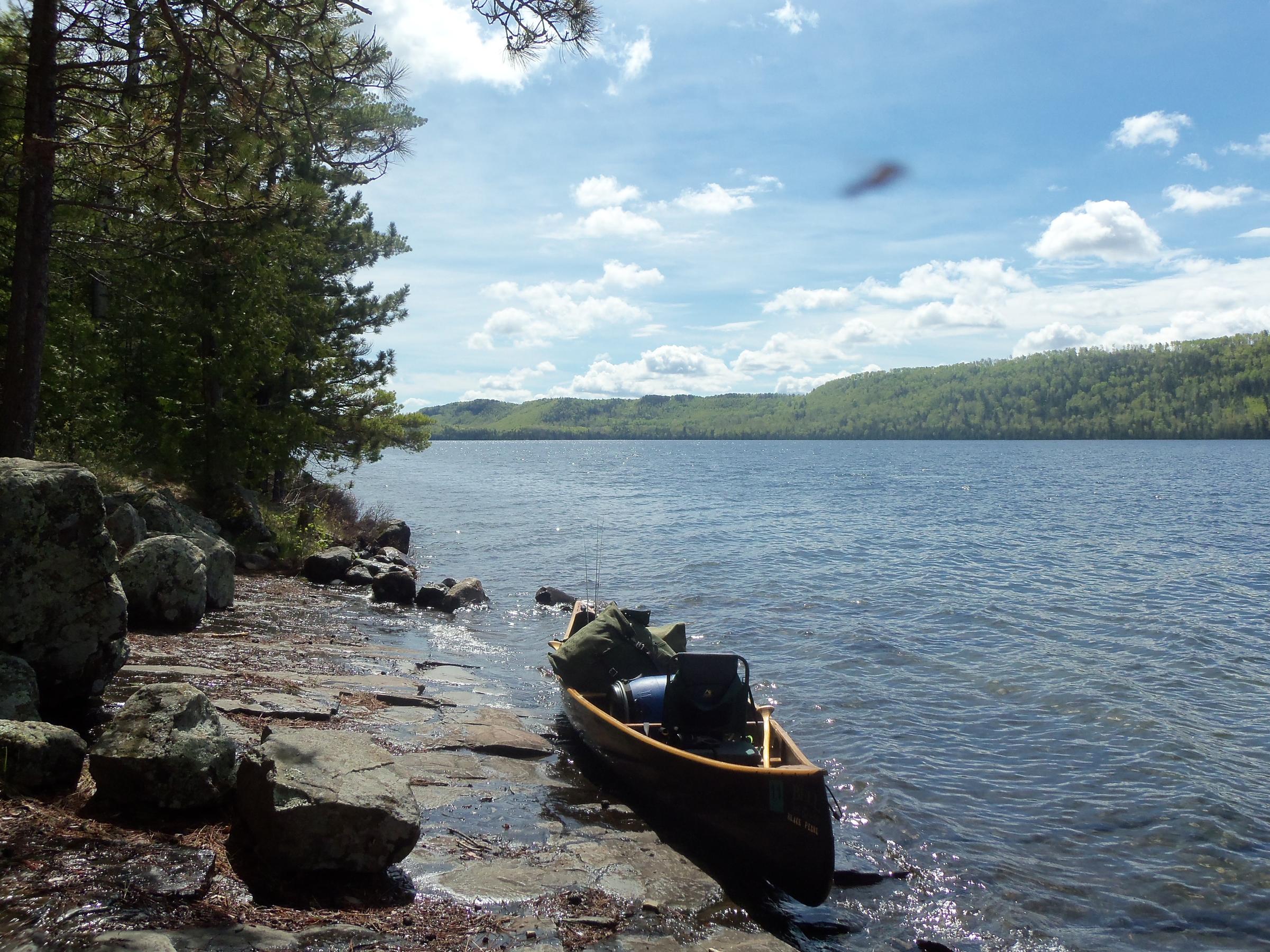 Excellent views of the high, steep cliffs along the southern shoreline can be contemplated & appreciated from this vantage point. The site itself was situated in an impressive stand of "pine" trees. Go figger. :) But the overall slanted terrain made this site a bit undesireable in that respect.


Continue pushing on down the north shore of the lake. A small jet plane flies past just overhead. Couldn't have been more than 1000 feet up. Kinda ruins our serene setting for the moment. At the large point where the lake narrows we decide to cross over to the south shore. The lone site on this side is our targeted camp. Also we make a little pit stop & scout out the portage trail up to Gadwall lake. It appears we are the first to cross the trail this paddling season as there are a few easily moved broken off branches & small trees across the trail. Surprisingly, there is a rather large marshy area to be negotiated. We take time to admire the bright yellow flowers growing here before we make the "grand ascent" to Gadwall lake. 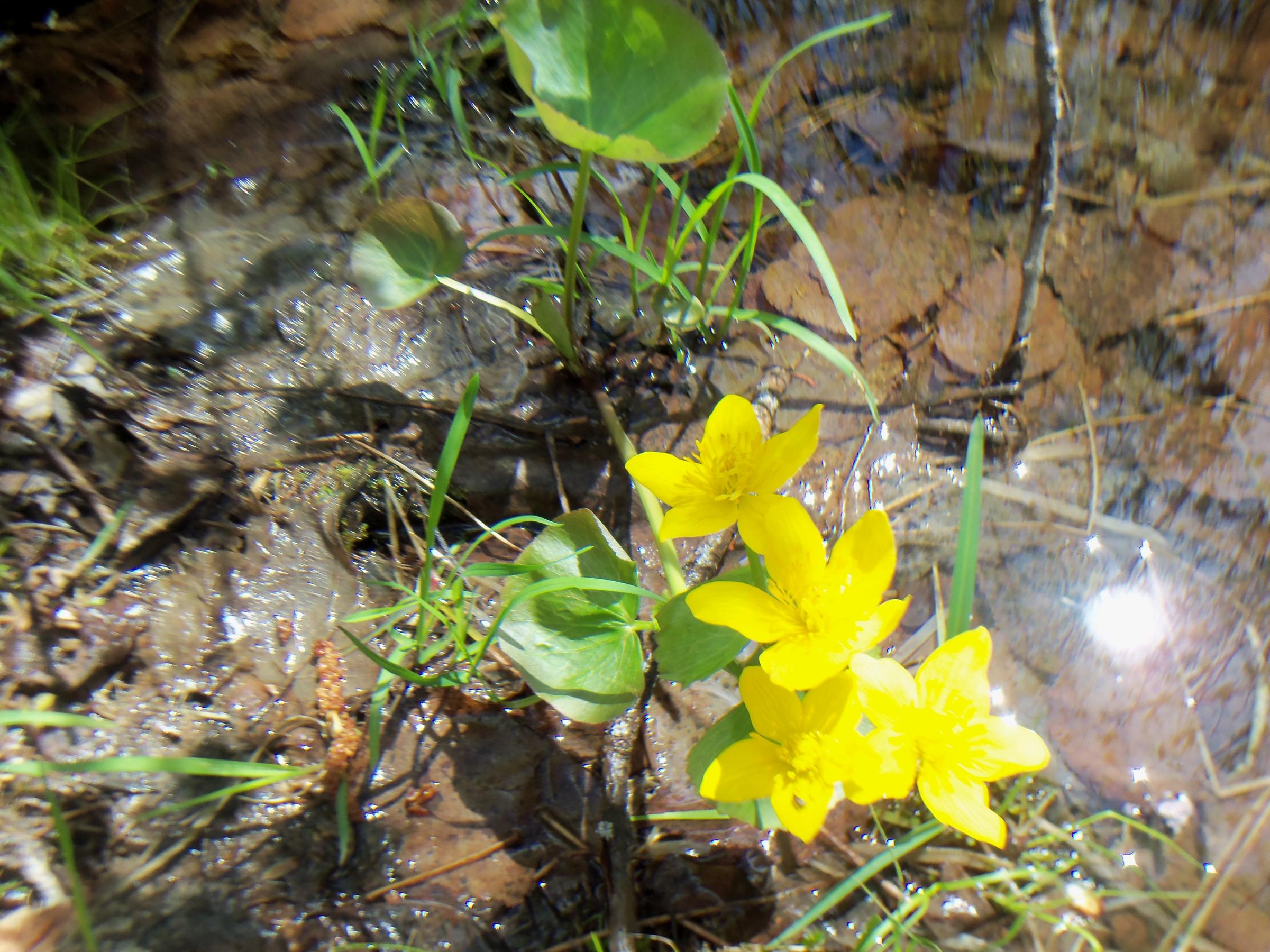 Somewhat of a shock? At the top of the trail near the lake there is a designated trout lake sign nailed to a dead tree. Seems inconsistent that they would allow a sign such as this here? 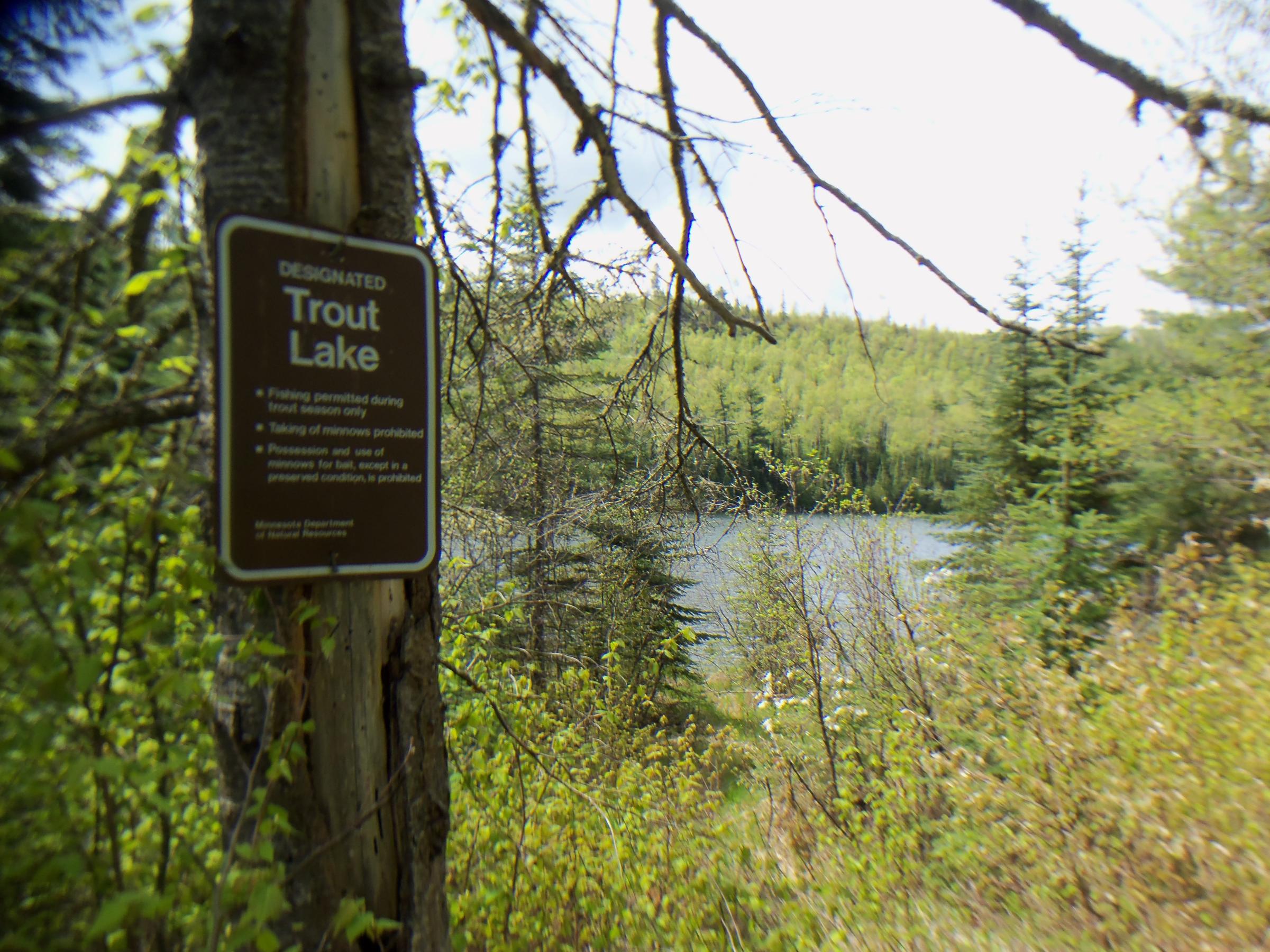 We check out the lake & start back down.


I am almost always a double portager. And one thing I like to do is pick up birch bark on my way back across the trail. It goes without saying that the campsites are usually picked over pretty good. So it's much easier to find good stuff along the trails. And since it weighs next to nothing it's easy to stuff some in a pocket for safe keeping. Since this will be our only "portage" of the day, it is decided we'll do our gathering here. We find plenty on our way down. Also we find some fresh moose tracks in the marshy area. Stopping to listen closely we only here the distant drumming of a grouse. The moose, apparently, has disappeared.

Contemplate stopping & checking out the Vale portage as well. But, we decide to press on to out target campsite to get things setup. Good fortune is not with us this day as we find the campsite occupied. We change course and paddle back across to the north shore. The site nearly directly across from Vale lake just west after the lake starts to open up looks inviting. We paddle up to find it open, and, immediately appreciate the excellent landing. Camp goes up quickly & relaxation becomes the next overriding objective. 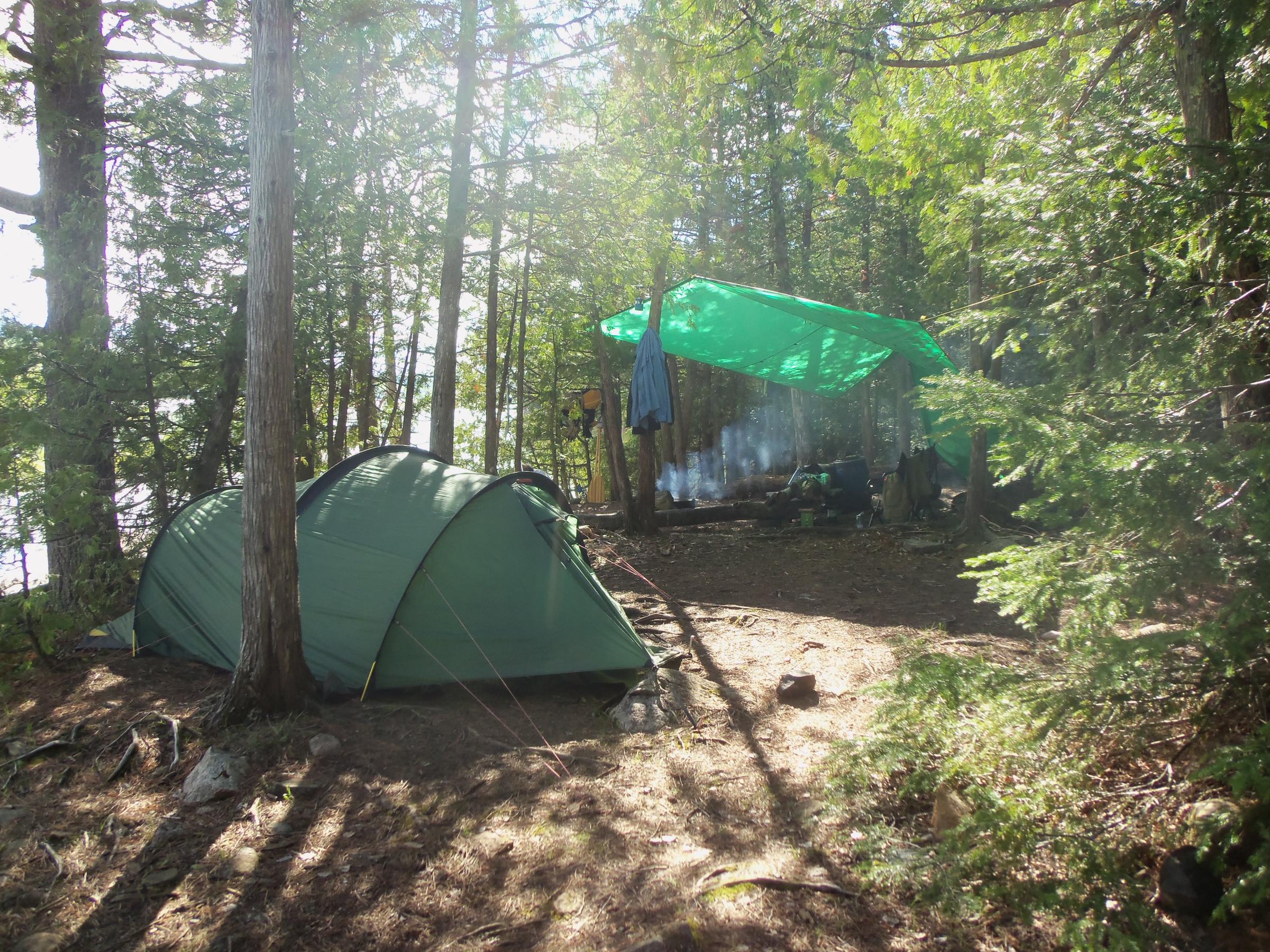 Later, while scavaging for firewood we came across an interesting marker. On the eastern perimeter of the site very near the lakeshore there is a cemented marker left behind from a surveyor back in 1936. 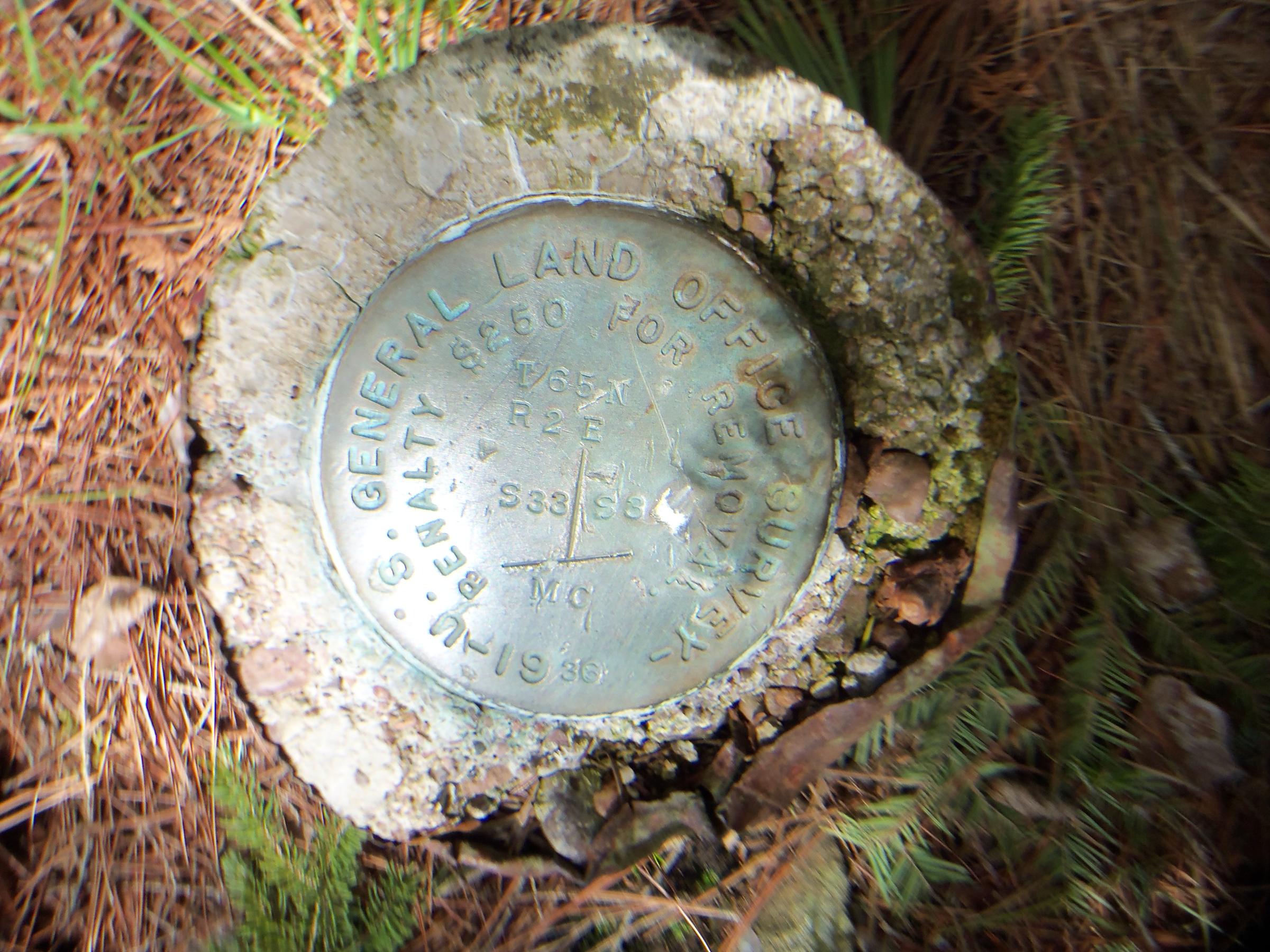 I think it would be interesting to hear the story of how this came to be here.


Ribeyes & taters for supper. Nothing more need be said. 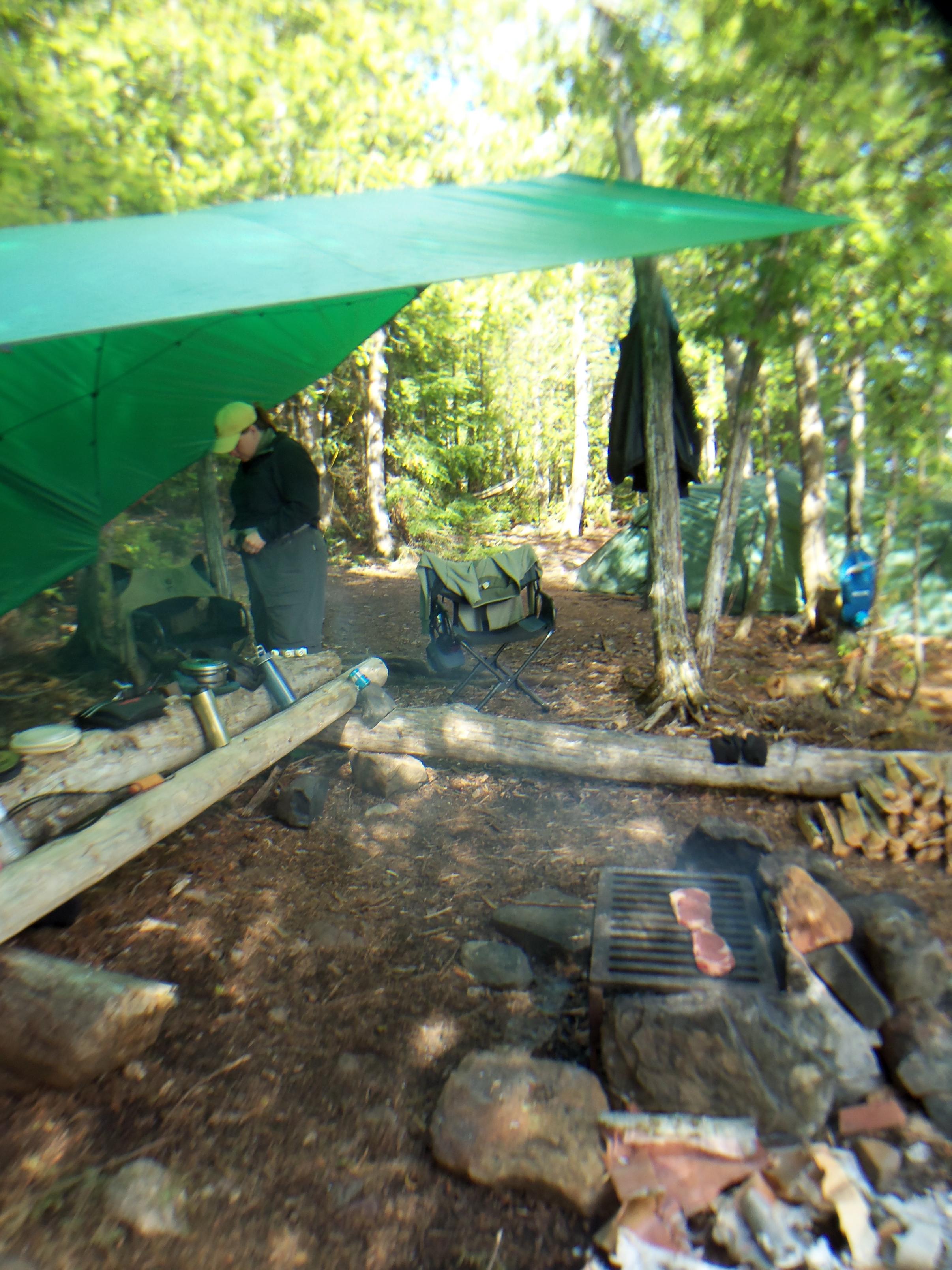 After supper we lounged around and soaked up some of the picturesque surrounding scenery before night fell. 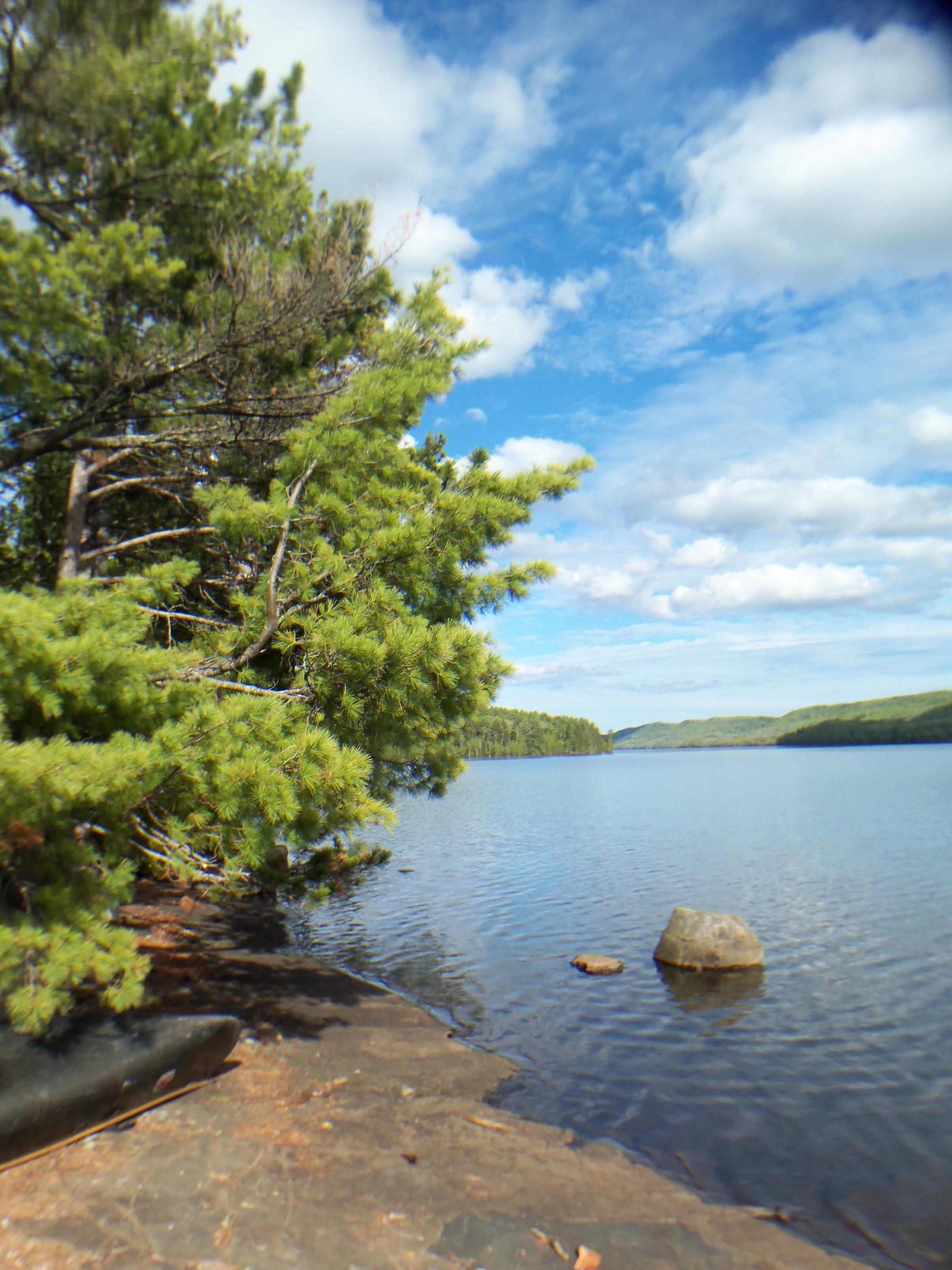 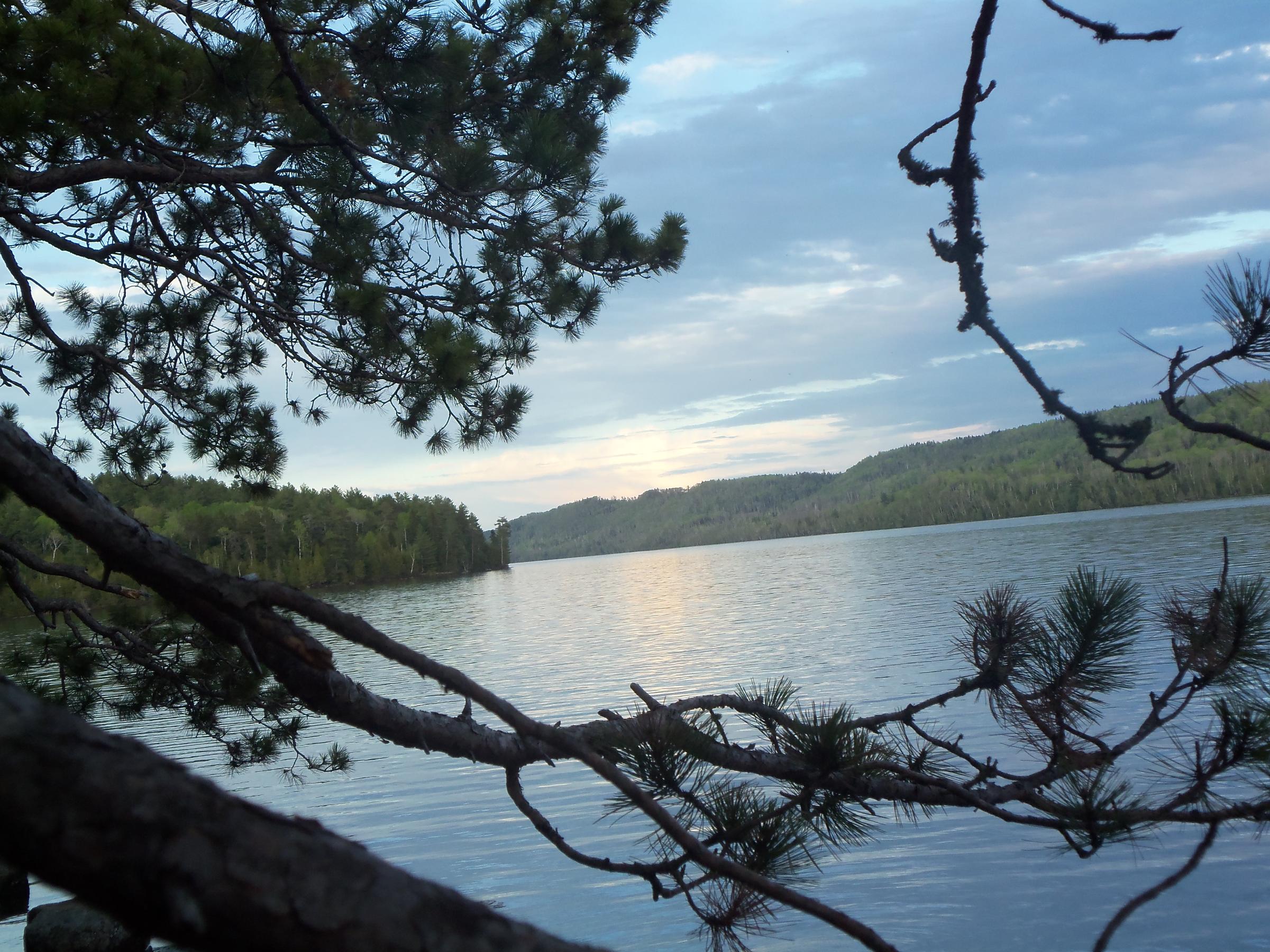 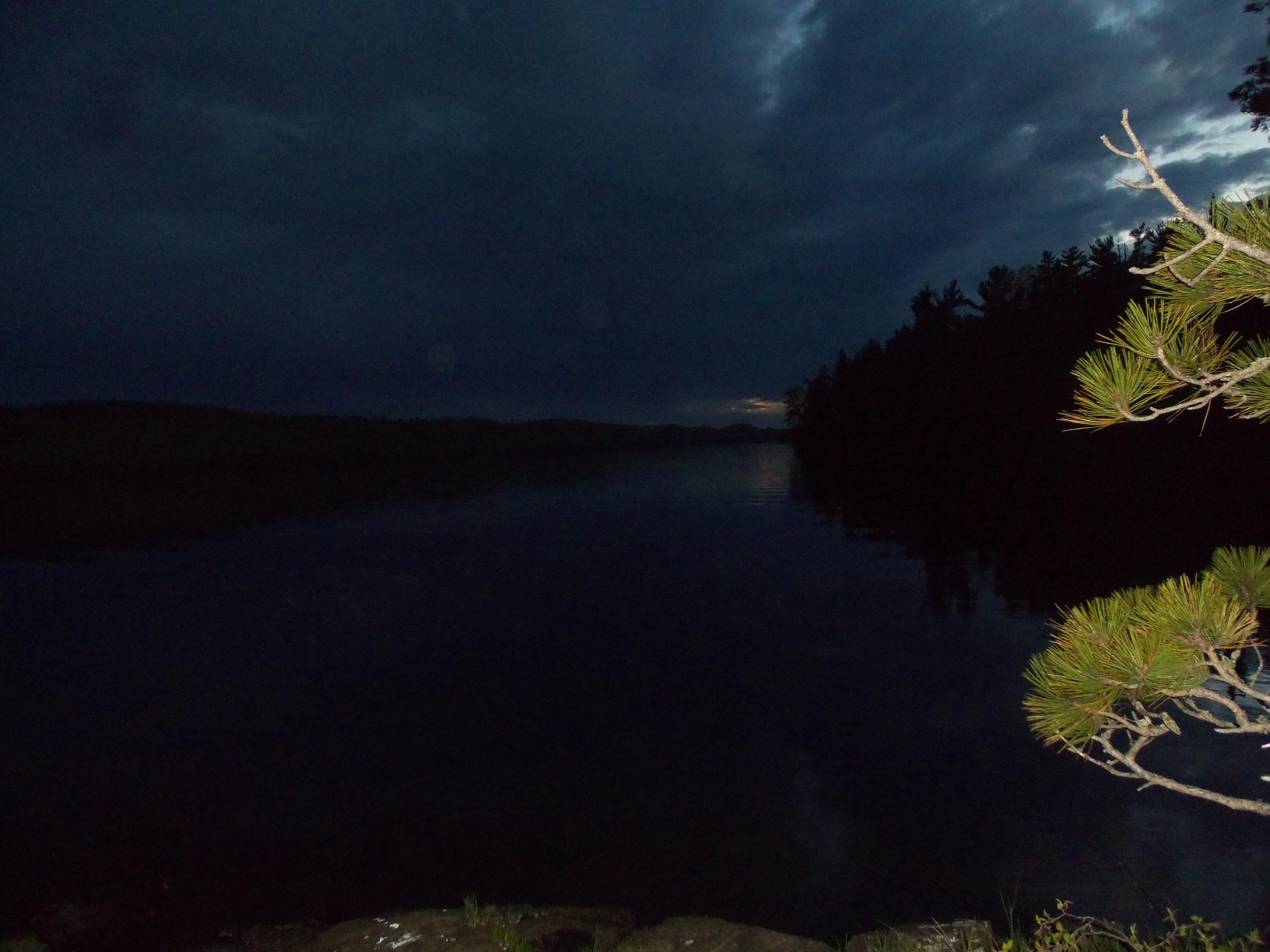