Trip Type: Paddling Canoe
Entry Date: 06/08/2011
Entry & Exit Point: Mudro Lake (EP 23)
Number of Days: 5
Group Size: 4
Trip Introduction:
My June 2011 trip to the BWCA was to be slightly different from years past. Missing this year were my two brothers and my dad, unable to attend due to scheduling conflicts. Life can get in the way sometimes. They would be replaced by three friends; two with BWCA experience and one rookie.
Discuss Trip: View Discussion Thread (11 messages)
Day 1 of 5
Wednesday, June 08, 2011

Day one began at midnight as the crew from Rochester, MN picked me up in Cottage Grove and then we hit the road for Ely. We arrived in Ely at 4:30am, stopped at the gas station for a couple of breakfast items, and then walked into Voyageur North Outfitters as they opened the doors at 5:00am. After securing canoes, life jackets, paddles, and bait, we loaded our gear in the Voyageur North van and headed for entry point 23. The sun was shining bright and temperatures were comfortable on the drive out. A few mosquitoes greeted us at our entry point, but they were to be expected. We were paddling across Mudro Lake at 6:30am with a campsite between Wednesday and Thursday Bay on Crooked Lake as our afternoon goal.

Our goal for the trip was to single portage as often as possible to maximize our fishing time; the first 80 rod portage from Mudro to Sandpit Lake tested our mettle. Our trip rookie was unsure what he had got himself into and was questioning how much he was going to enjoy the trip after the physically demanding first portage. We assured him that would be the most difficult portage of the trip.

After buzzing across the glasslike Sandpit Lake with bright sun and blue skies we were on to the longer, but much less strenuous 160 rod portage into Tin Can Mike. Paddling with the rookie in my canoe, we decided to take turns double portaging, so we weren’t exhausted before noon.

We cruised across Tin Can Mike, very happy with the pace we were moving, and excited about the prospect of huge smallies waiting for us on Crooked Lake. A quick 80 rod portage into Horse Lake and we were relieved to be dealing with a crosswind, rather than a headwind on our way to the Horse River.

We managed to hit what seemed like every rock in the river, but eventually the rookie started identifying the boulders before we felt them. The rapids were a fun little challenge and the portages of 58 rods, 48 rods, and 73 rods were knocked out quickly. A short sandwich break on the last portage to refuel and we were paddling again toward Lower Basswood Falls.

The breeze was now starting to kick up and some clouds were blowing in, but nothing too ominous. After taking a quick peek at the falls, we were paddling toward our destination. We reached Table Rock at noon, and were greeted by rain and rough water. The wind was really getting to Nick and he wanted to set up camp for the day. We decided to stick with our original goal and made it to campsite 1856 by 2:30pm. We were done traveling for the day!

Thankfully, the rain was done for the day (and our trip) and we were able to set up a dry camp. We decided to have an early dinner of brats and Mac n cheese after setting up camp, so he could get out on the water and enjoy the fishing. The fishing was not as hot and heavy as in years past as we were unable to locate numbers of fish, although we did find some quality. This would end up being the theme for the trip. Nick and I were pretty tired from the day, so were returned to camp before dark and decided to call it a night at 9:00pm. Tyler and Andy remained out for the evening bite and were rewarded with a few fish. 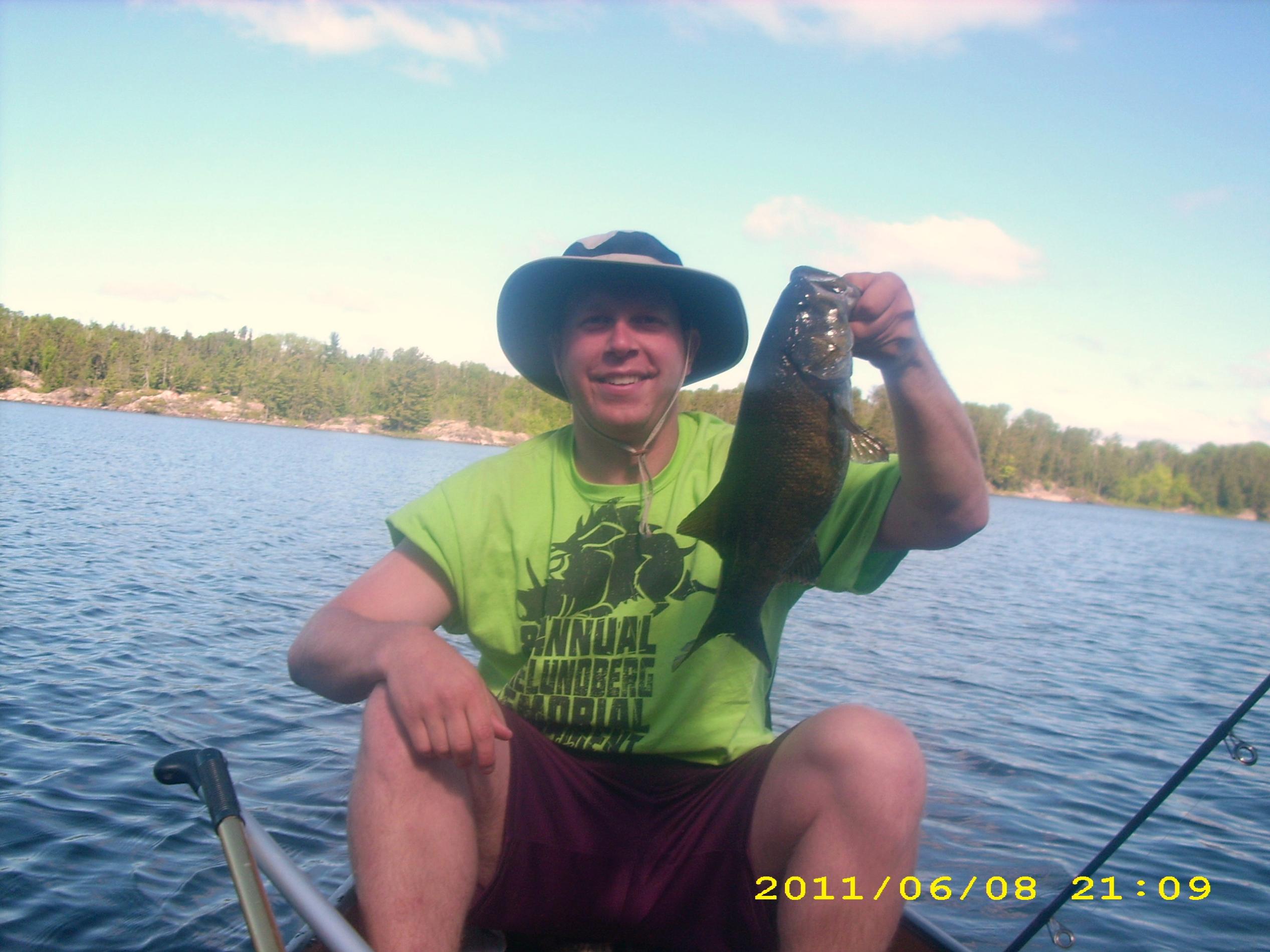