Trip Type: Paddling Canoe
Entry Date: 06/08/2011
Entry & Exit Point: East Bearskin Lake (EP 64)
Number of Days: 5
Group Size: 4
Trip Introduction:
Myself, my buddies Greg and Brian, and Brian's 15 year old son, Taylor hit Crocodile Lake for some relaxation, fishing, and exploring.
Discuss Trip: View Discussion Thread (9 messages)
Report
Croc was great! What a beautiful little lake. The only downside was the portage into Croc from E Bearskin. I have never been a part of a worse mosquito infestation in my life. It was like what you might picture in Alaska. We were literally covered in mosquitoes. The were on everything. They didn’t give a crap about 100% DEET and they bit through your clothes. We took extra gear to get camp set up since the other canoe was not coming in until around 5pm and we got there at 10AM so we had to triple portage an incredible amount of stuff. It was hot and humid and mosquito infested and straight uphill. Seriously, I have never been a part of anything like it and I hope I never have to again.

We took the last site on the north side at the far east end of the lake. None of the sites on the lake seemed to be very nice but this one was the best of them. Had a couple of decent tent pads so our group of 4 in 2 tents was just fine. We fished the structure in the lake and hammered the walleyes. There was a 17 foot hole on the south shore of the lake where we tied up the canoe on shore to stay out of the wind and pitched chartreuse jigs and leeches. We sat there for about 2 hours and caught a walleye on every cast. It was the fastest walleye action that I’ve ever had. Seriously, the only time we didn’t have a double was when it took one of us longer to unhook a fish and the other guy threw bait back in the hole again sooner. You had to really work for any size, though. Most of the walleyes were around 10-12”. About every 5th one was 13-14”. One night the 4 of us ate 20 walleyes for dinner. I have not been that full in a long time. At one point, we switched to artificial baits since we were blowing through our leeches so fast. I bet we released 200 fish in 5 days!

We also caught a few very nice 20”+ fish. It seemed like the big fish were randomly spread out around the lake. My buddy, Greg caught a nice 20” in the current by the pinch point at the earth dam. I caught a nice 22” on a random drift in the middle of the lake. The other canoe caught a couple as well. We had one of those flashlight style depth finders and it was really helpful since the water is so stained. It seemed like you were in pretty deep water everywhere but the readings would be 5’ or 7’ in a lot of the lake. We found some nice holes and they all held tons of fish but it looked like they were almost all from the 2006 or 2007 year class. The south shore had a few very nice pockets. We found a 20’ hole off a point where we got out of the canoes and fished it from shore with bobbers. Lots of walleyes there and also a few really nice jumbo perch around 12” which were bigger than most of the walleyes we caught.

The weather was pretty good too. We had 68 degrees and rain on the first day with a west wind of around 10. That night the wind switched to the east and we got a bit of a cold front with temps around 58 during the day. We all thought it might shut down the fishing but it didn’t happen. We got a steady light breeze out of the east which was perfect for slow drifting with very light jigheads. Fishing from camp was also quite productive in the hour or so before sunset. We had planned on night fishing with lighted slip bobbers but we never did since we were all "fished out" by dark. Nights were in the 30’s which was great for sleeping.

We took an afternoon trip to explore the area on the way over to the “official” Crocodile River EP #66. Seems a lot more remote and very seldom used back there. We had to pull the canoe through about 6” of water on the Crocodile River in a few spots. You would not be able to get through there with a loaded canoe so I would not recommend coming in that way. There are a few very nice rock formations as the river winds its way through some boggy low country. We got up into Parsley and Bean lakes to do some exploring. There were huge moose tracks everywhere and the portages were really no more than moose trails. Everything was very overgrown and the portages were difficult to locate from the canoe. We usually had to get out in the area we thought they might be and bushwhack a bit to determine where they were.

This was a great trip into a very nice area. I would highly recommend it to anyone who's main interest is fishing but, since there is not really a lot of trip options, someone who is looking for daily travel would not enjoy it as much. As far as solitude, I think the locals seem to use it a lot during the day. We always saw a few other canoes while we were fishing but as far as we could tell, there was nobody at any of the other sites once the sun went down. 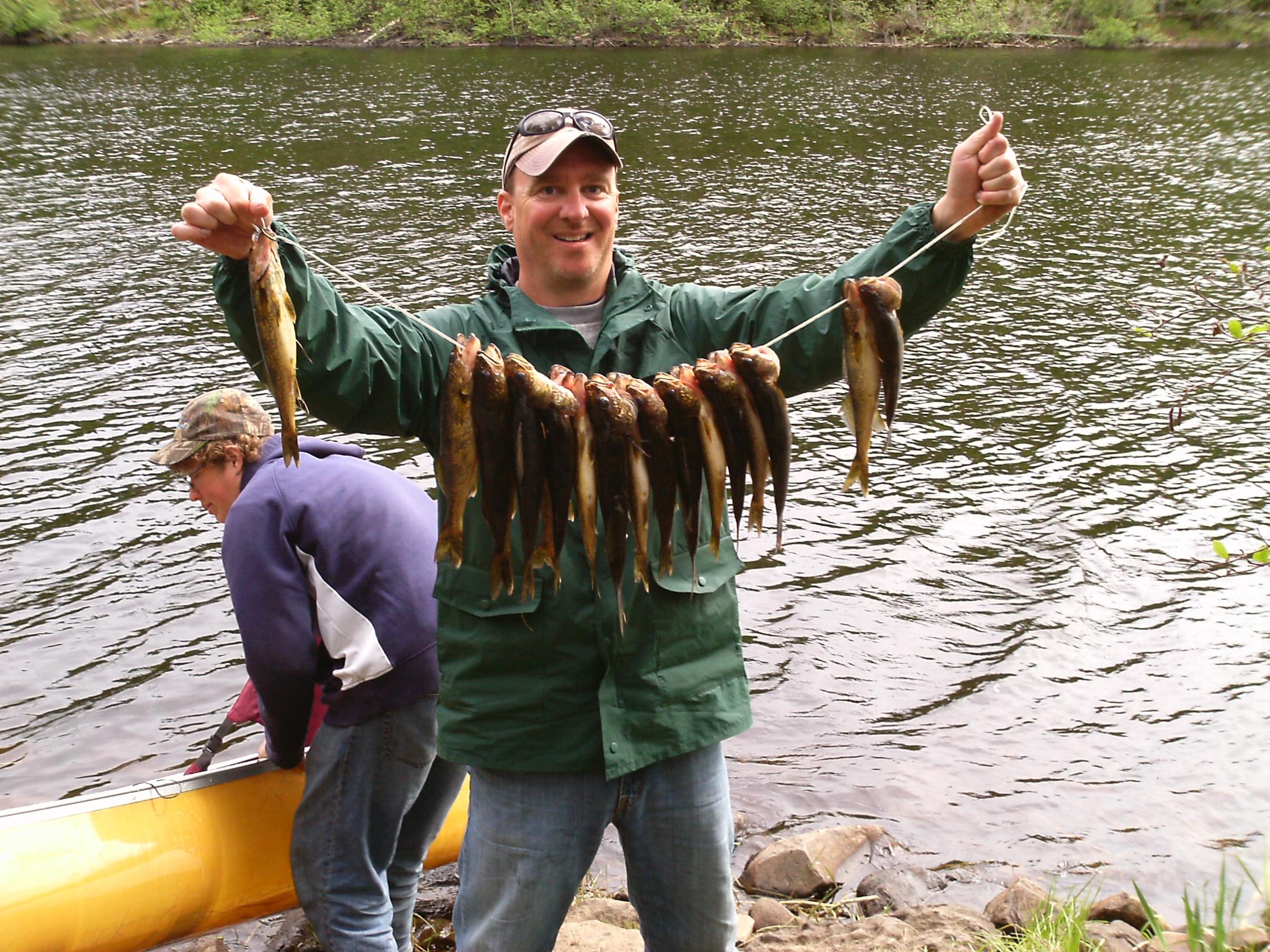 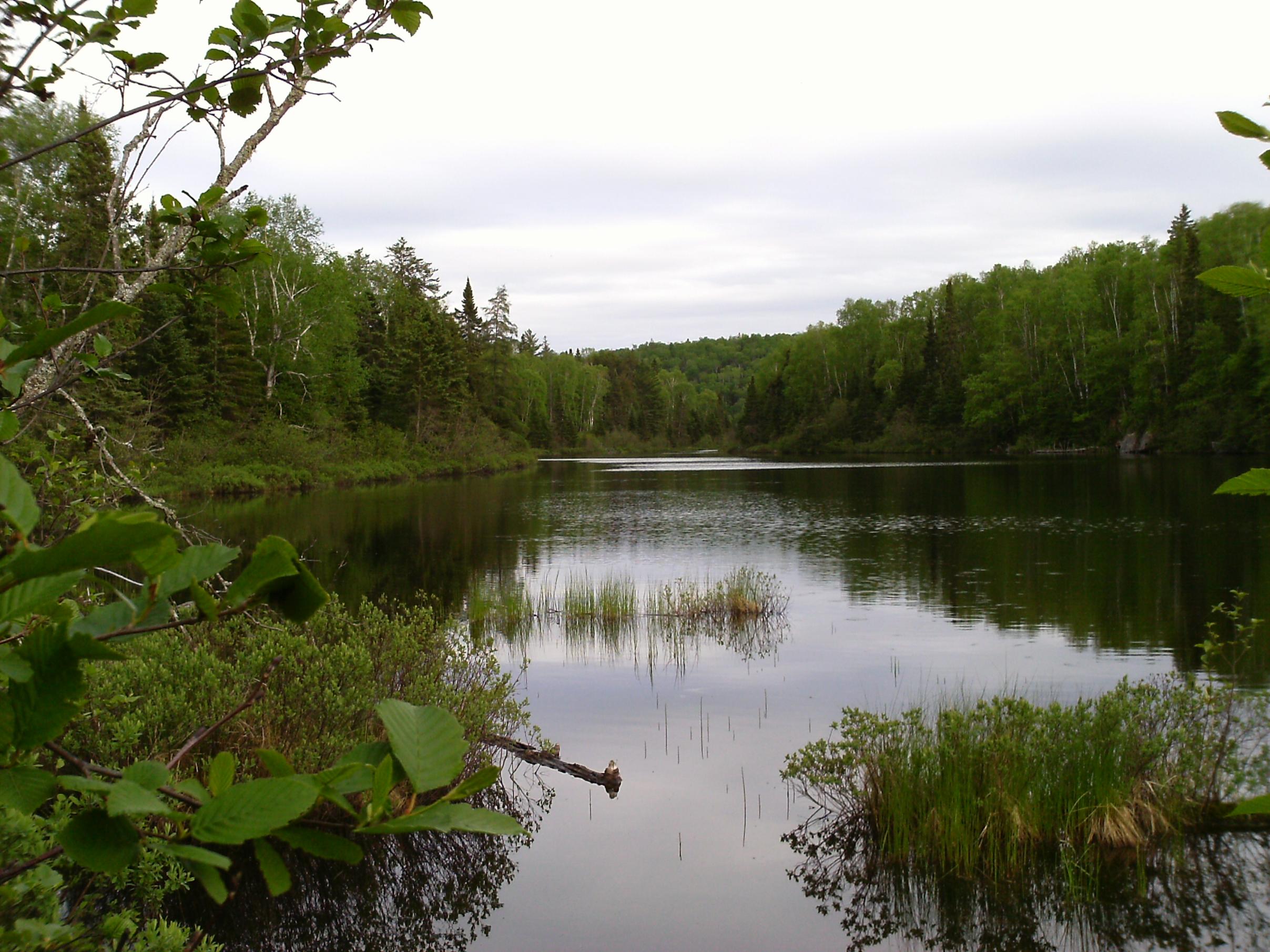 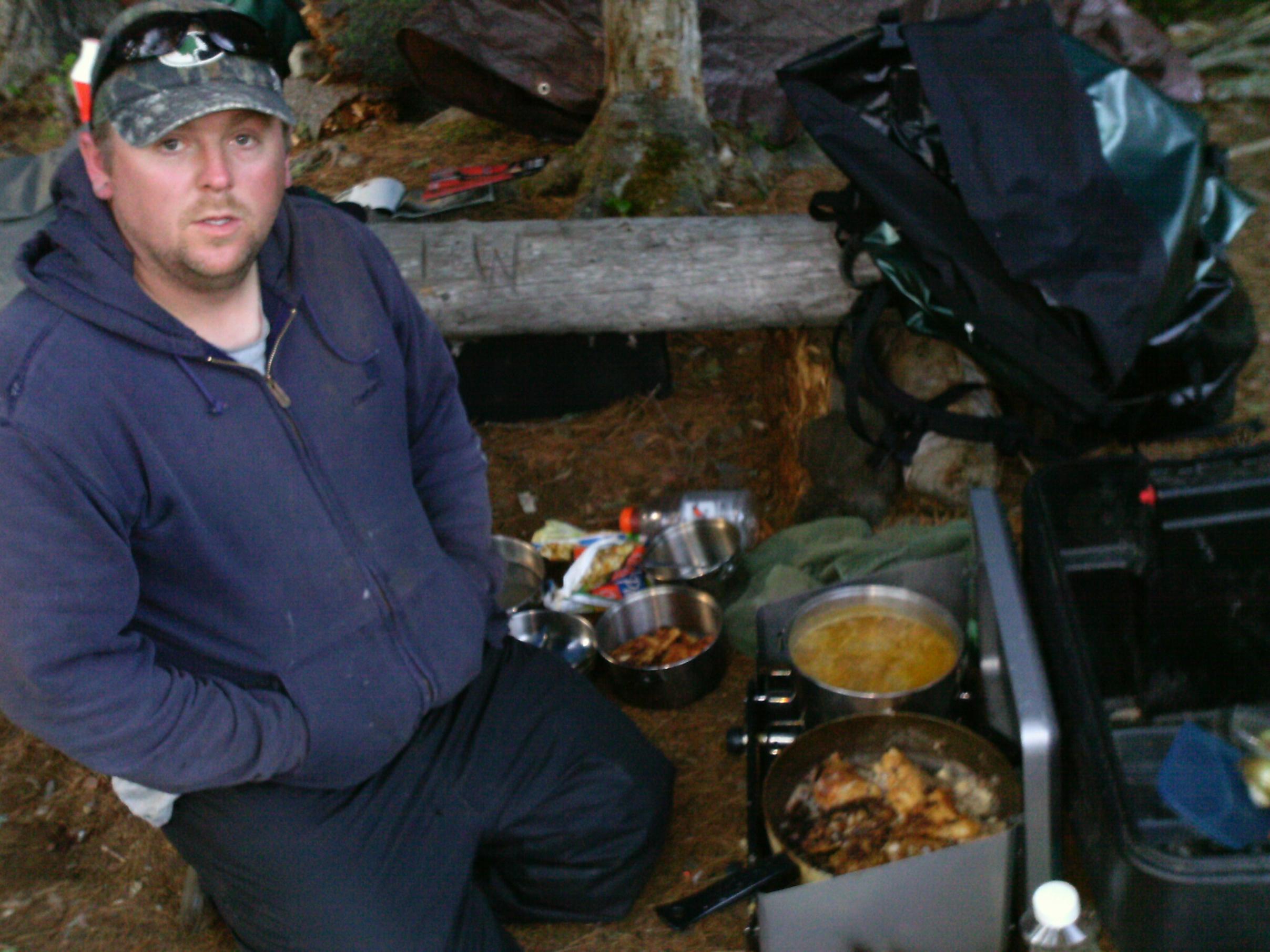 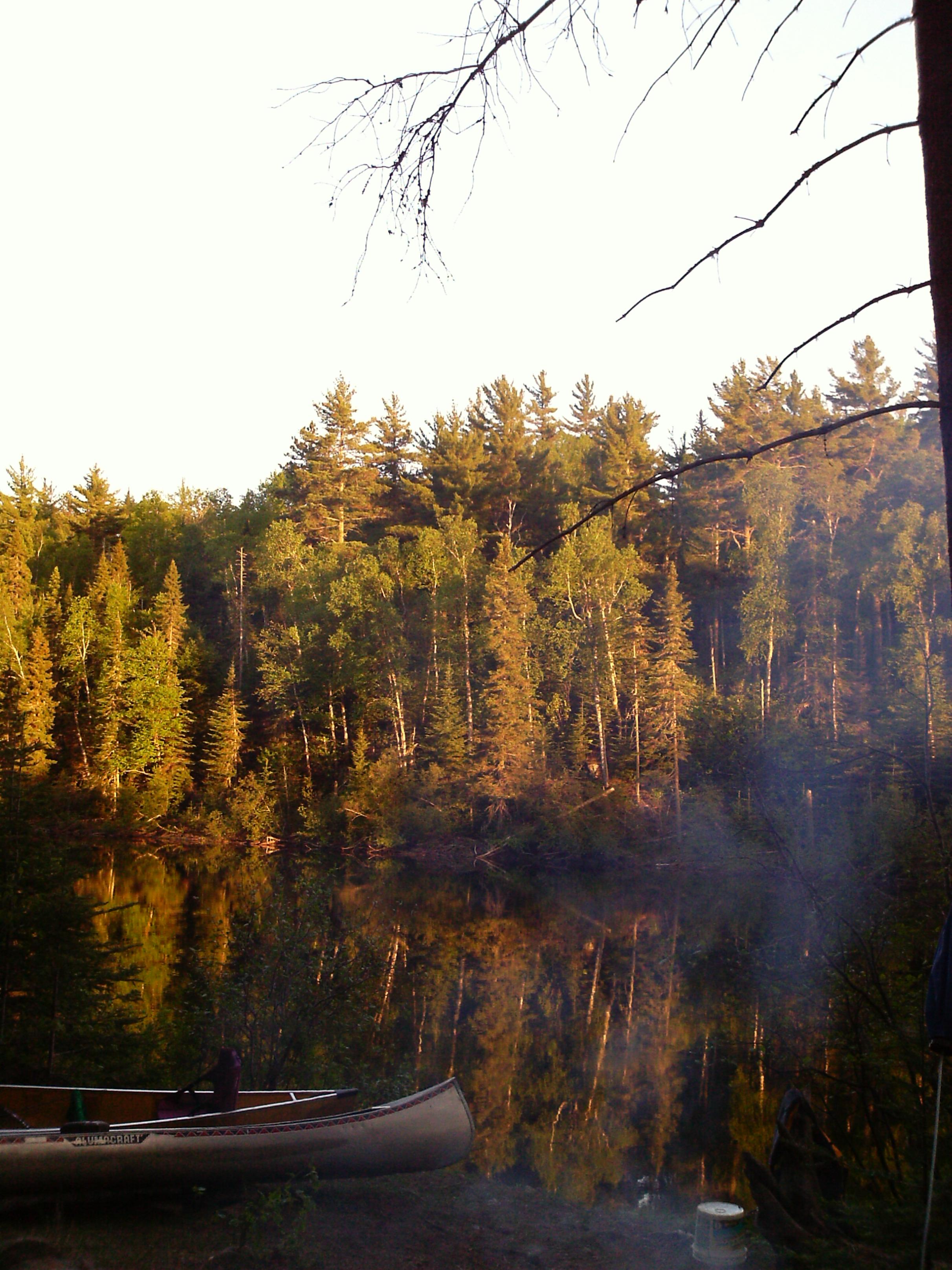 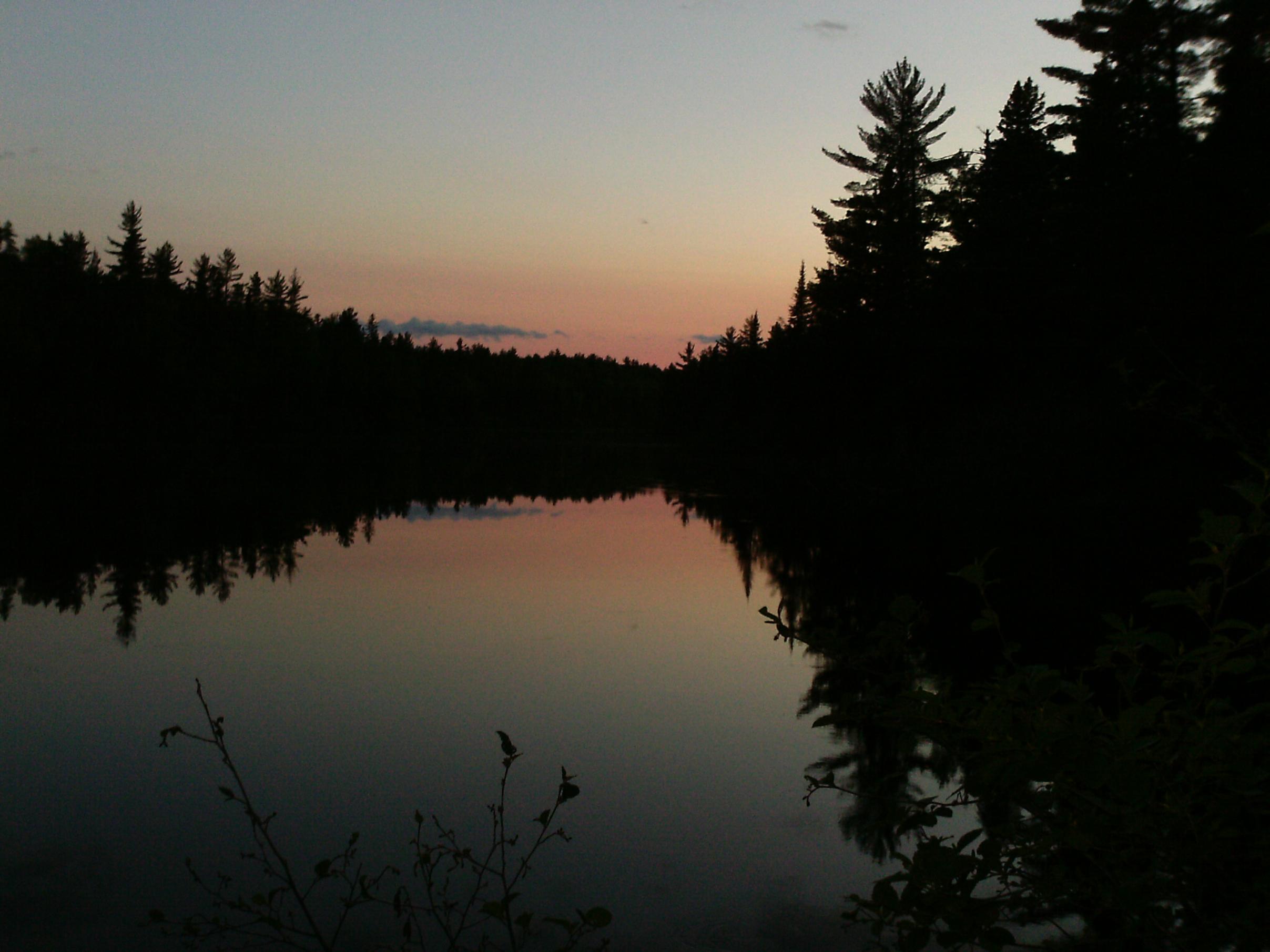