Trip Type: Paddling Canoe
Entry Date: 06/16/2011
Entry & Exit Point: Cross Bay Lake (EP 50)
Number of Days: 3
Group Size: 7
Trip Introduction:
Hi everybody, my wife Pam and I try to do one trip every summer with our 3 kids and a couple kids from extended family. This year we chose the gunflint area and incorporated a stay with gunflint lodge the night before entry and a stay in Grand Marias on departure.
Discuss Trip: View Discussion Thread (8 messages)
Report
We start our trip with an 8 hour drive to the Gunflint lodge where we have reserved a large cabin to stay in for a night prior to our canoe trip. Single night stays are not the norm for cabins like this as they typically have a 2 day minimum I believe. But for whatever reason there was a 1 day window available for a cabin large enough for our 7 person group.

I was the gracious recipient of a 50% lodging discount reserved specifically for American servicemen & women who served in wars. Most people that know me don’t even know I was in the military let alone that I served in the gulf war. But I don’t mind stating as such in order to brag on these fine people at Gunflint Lodge for this unheard of gesture of patriotism. Furthermore our stay although brief was very much enjoyed, they run a tight ship and I highly recommend their services.

Our entry day at EP50 began with rental of (3) souris river QT17 canoes from Gunflint Northwoods Outfitters. GNO transported the canoes to EP50 for us which was really nice. 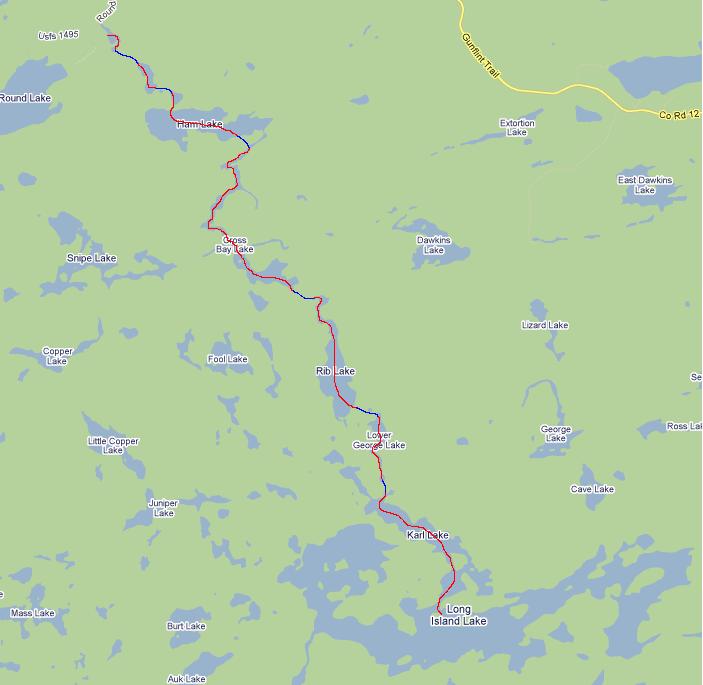 We put in at cross river which is outside of the BWCA, actually it is also a bit outside of Ham lake by 2 short paddle lengths and 2 short portages. 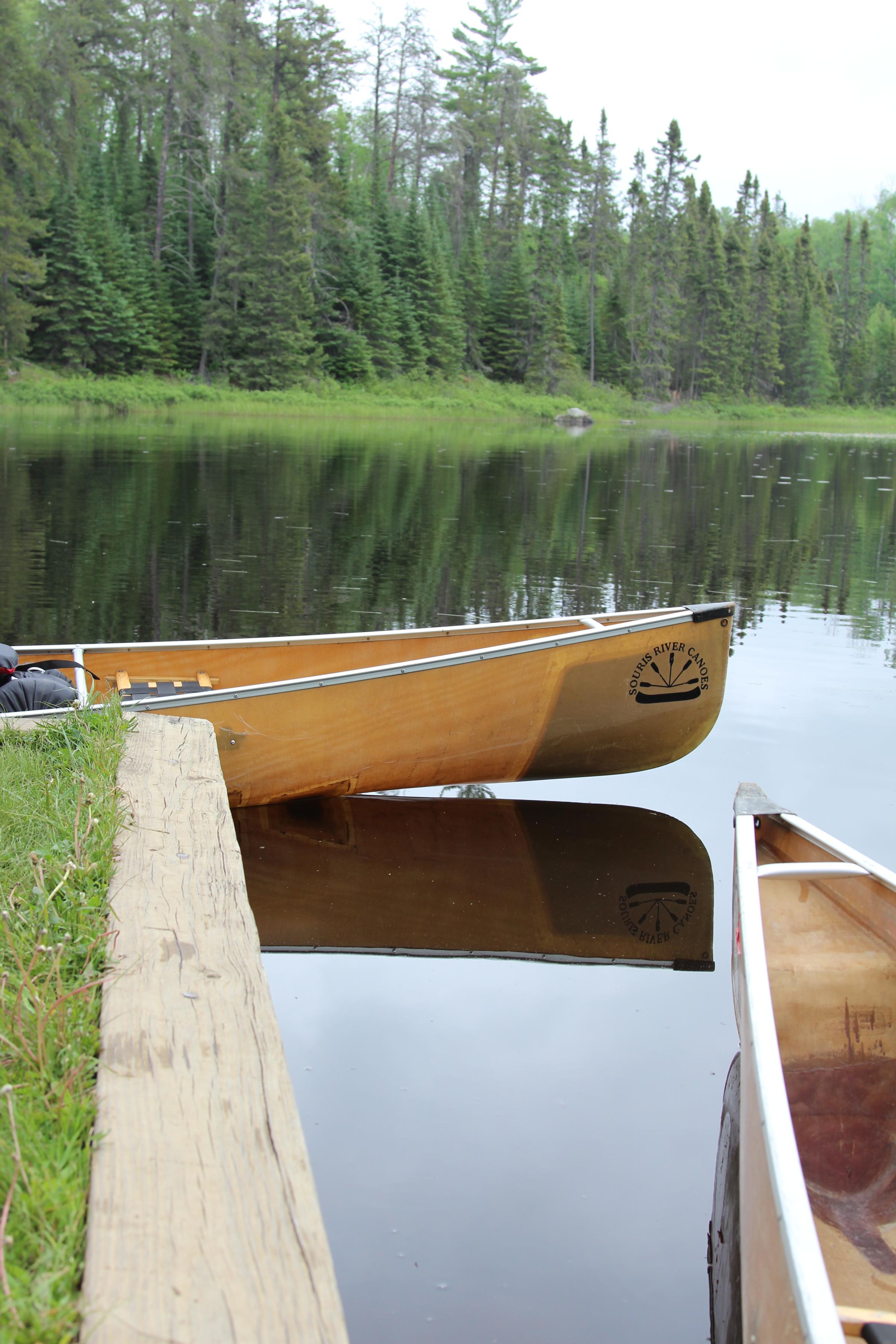 You paddle a very short distance before you hit your first portage which is around 50 rods. The other end of the portage is more typical for BWCA canoe landings. 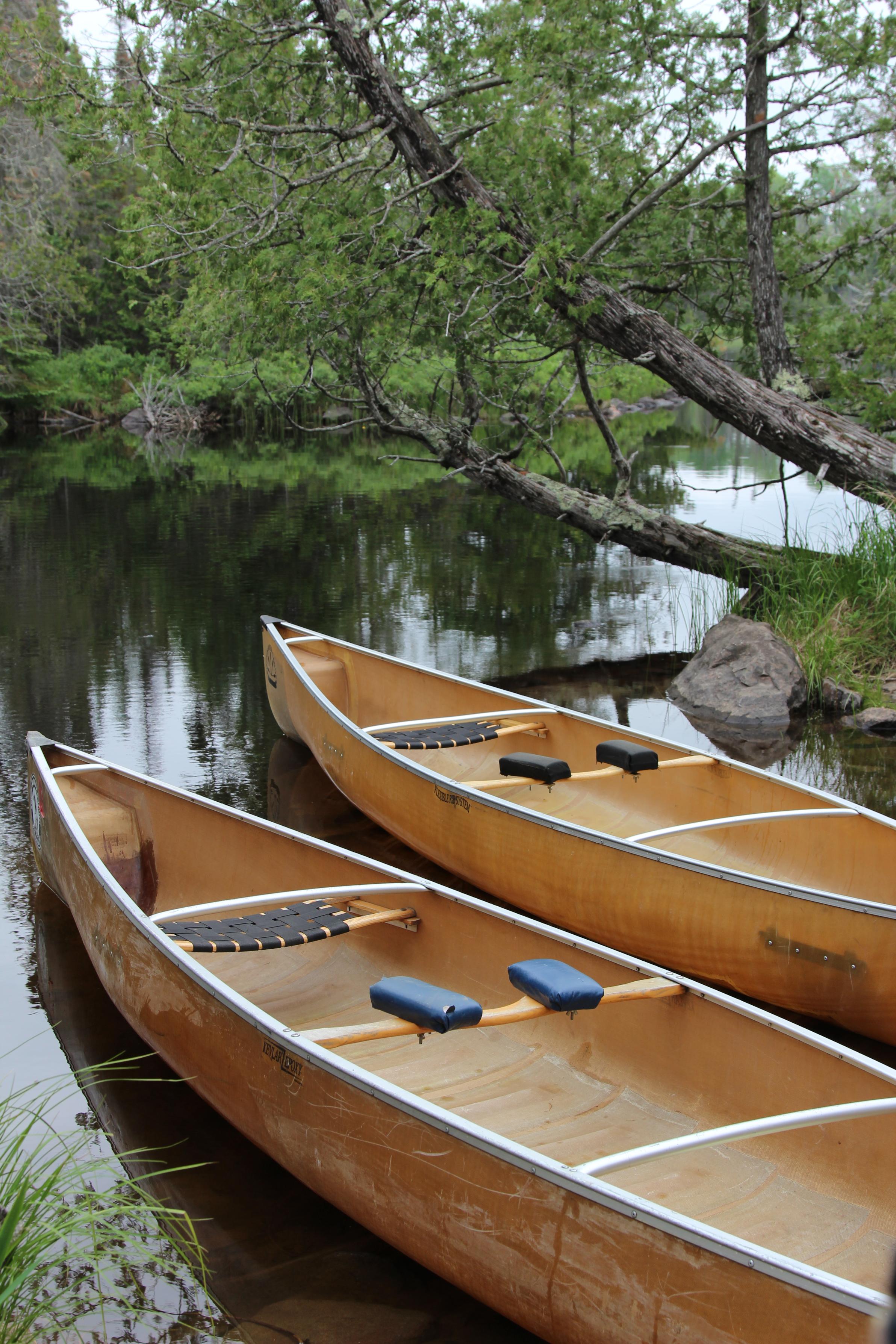 Another short paddle and you hit the second portage which I believe was around 40 rods?

This takes you into ham lake which is still outside the BWCA but seems to have several decent campsites on it.

As I have read others say, you have to watch for the portage out of ham to cross bay a little sooner than the maps show.

If I recall correctly this portage starts with a fairly steep climb with some timber landscaped type steps, short portage though, 20 rods or less and you officially enter BWCA at the top of the portage hill climb.

Cross bay is a neat narrow lake with a lot of hairpin turns, it does have a couple decent looking campsites on it but we cruised on by. 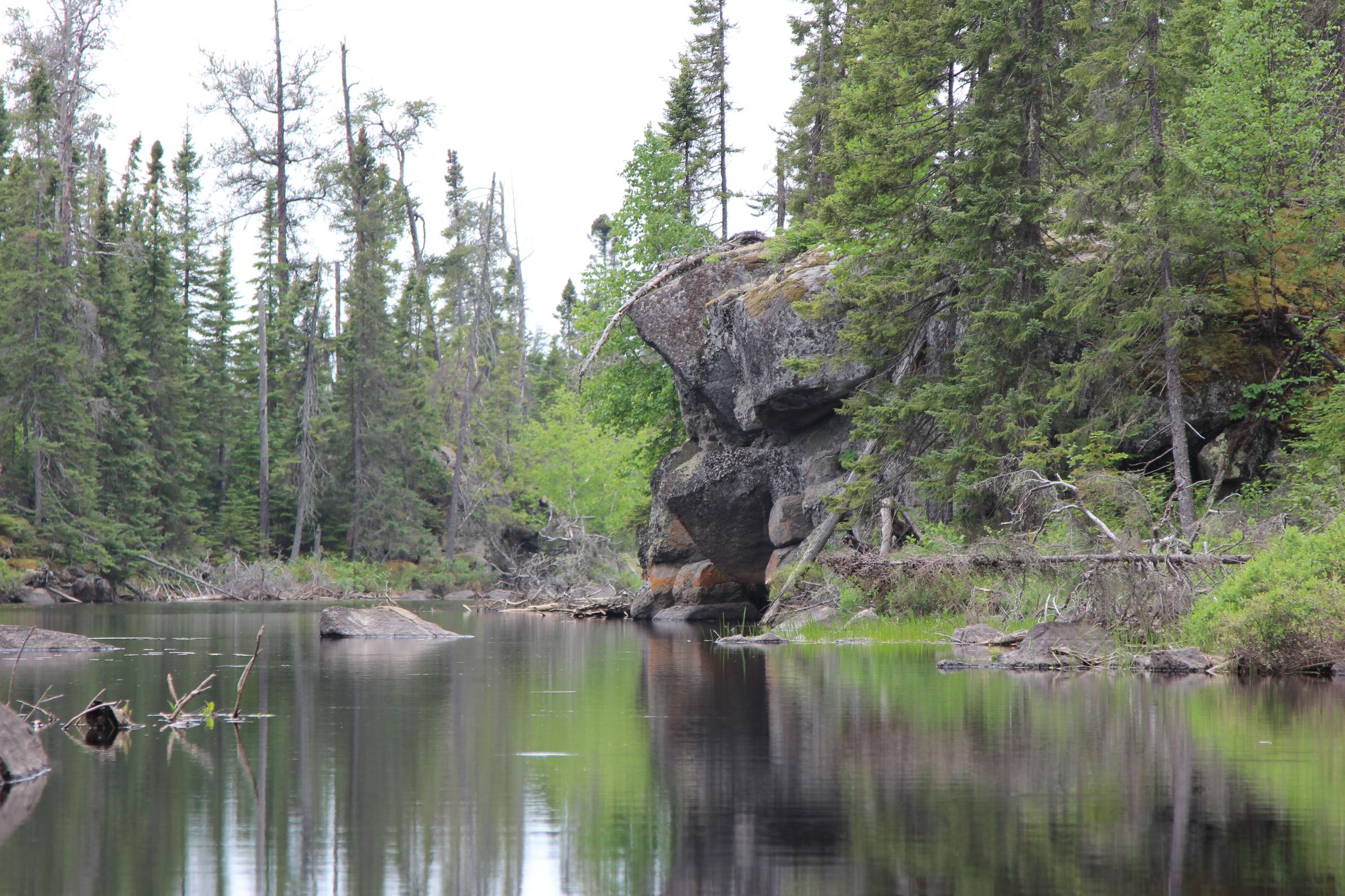 Cross bay to Rib lake portage is similar to the first portage on this route at around 55 rods, not a bad portage at all we didn’t think. On the north end of Rib lake there is a huge rock that looked like it had a face on it, like a tiki mask face. 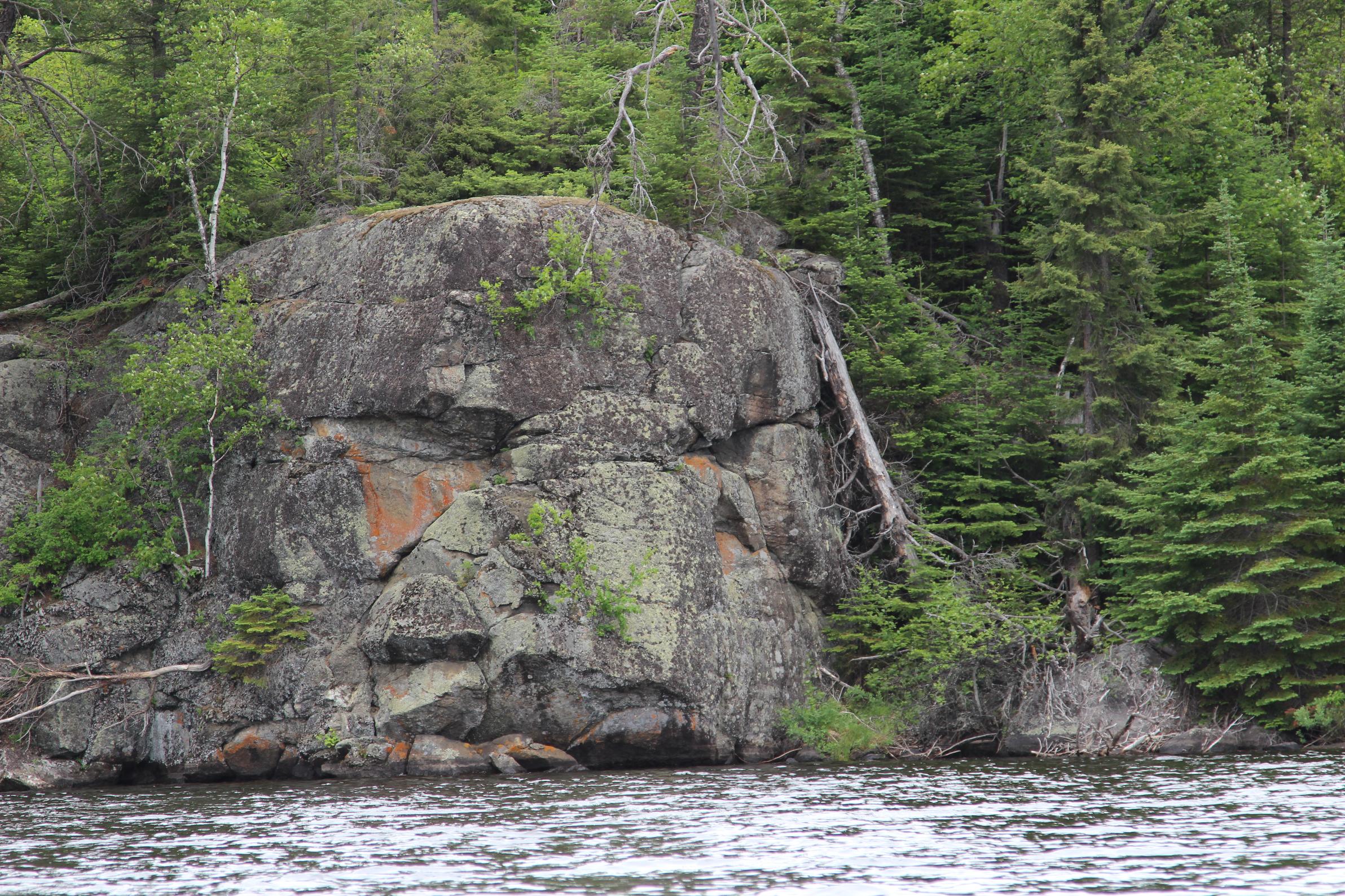 Rib lake had one campsite on the east side that looked like bug heaven. Very protected and no rock outcroppings.

At the south end of Rib there is a river mouth that you head up for a short stretch where you find a nice little falls and the portage into lower George, short portage like 30-some rods. 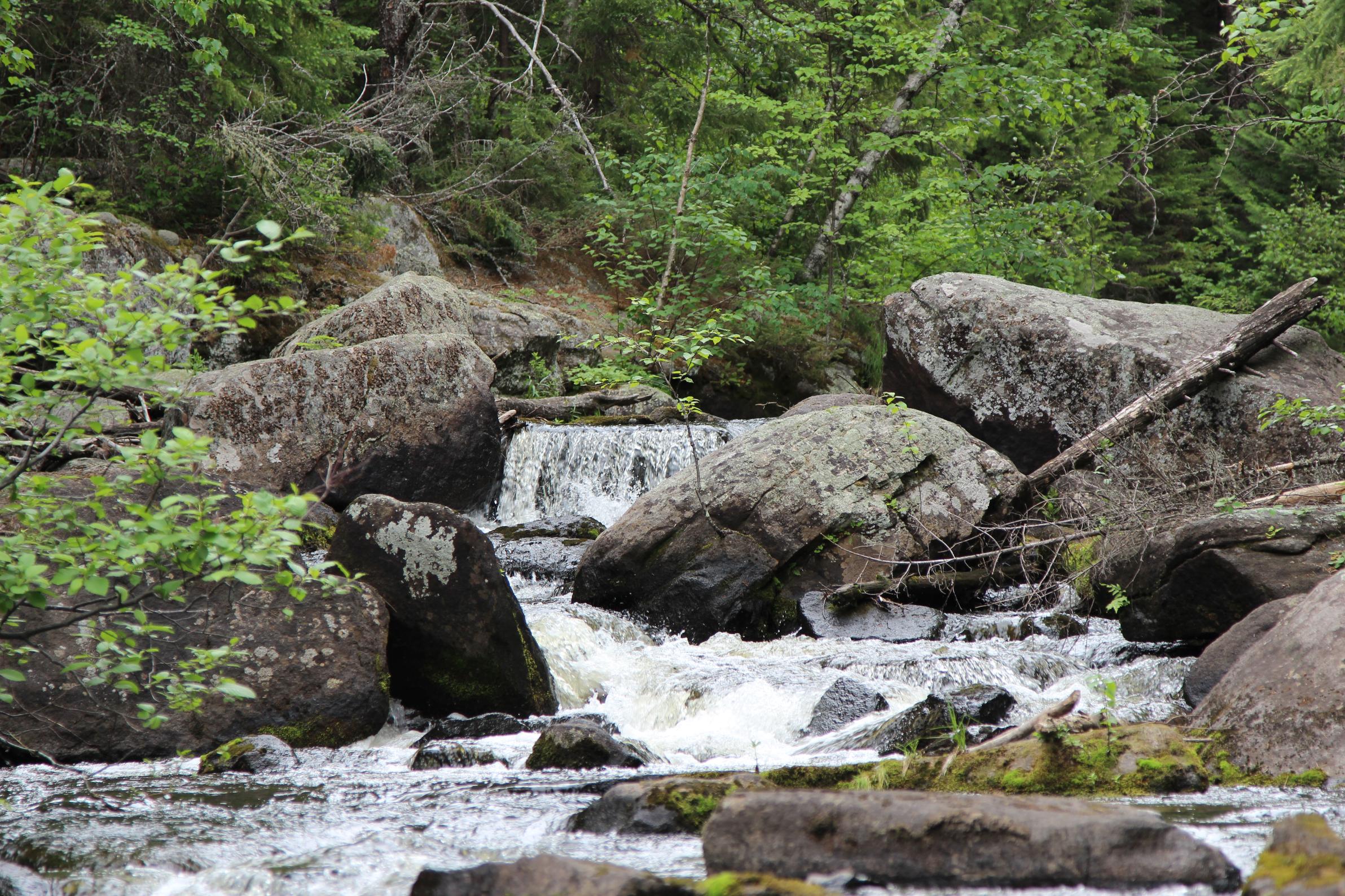 A short stretch of water before the next portage which takes you into Karl lake, again this is a short portage, 30 rods or less.

Once in Karl lake we felt that we really had some nice options, option A was to take the immediate portage from Karl to Long island that looked like a well used motocross hill climbing course from where we were in the middle of the bay lol! Or, option B was to head down Karl lake and investigate a campsite not shown on most maps but reported here at this site as a decent camp spot.

We went with option B, we found the camp spot but it really didn’t impress, looked buggy and the view was.. fair at best we felt. It had seclusion going for it as most canoe traffic shooting through the narrows would have no reason to swing back into this bay and it also doesn’t show up on most maps so hardly anybody was likely to come looking for it. But we decided to head through the narrows and see if the island site just south of the narrows into long island was open, and it was.

The camp site is actually on the east side of this island whereas my map shows it on the west side.

Decent camp site, (site 2010) nice fire grate area, no level tent spots but there are several spots to pick from. We had one larger tent like 12’x12’ floor so it’s hard to find a tent pad anywhere in BWCA that won’t leave someone sliding downhill inside the tent. 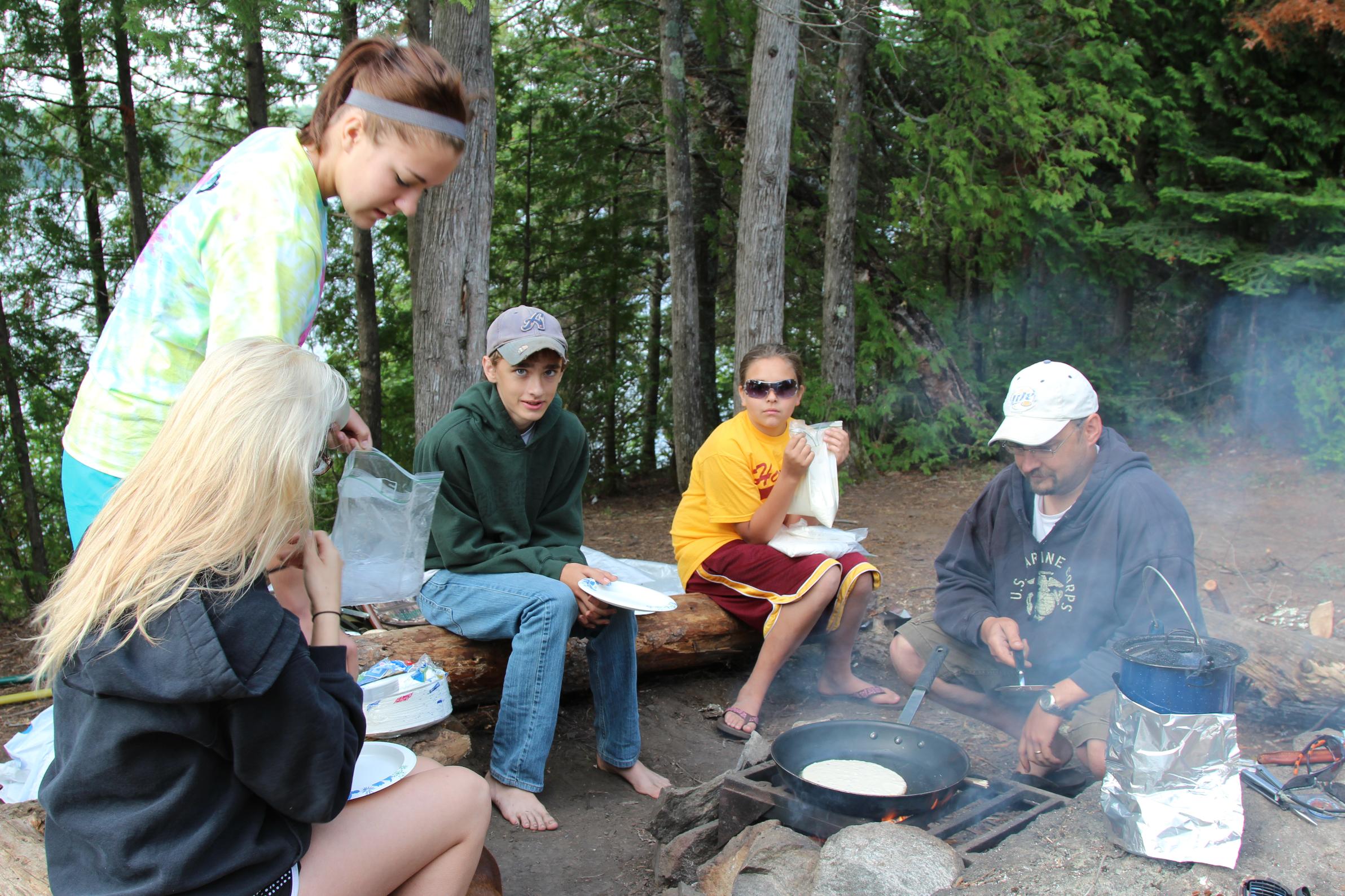 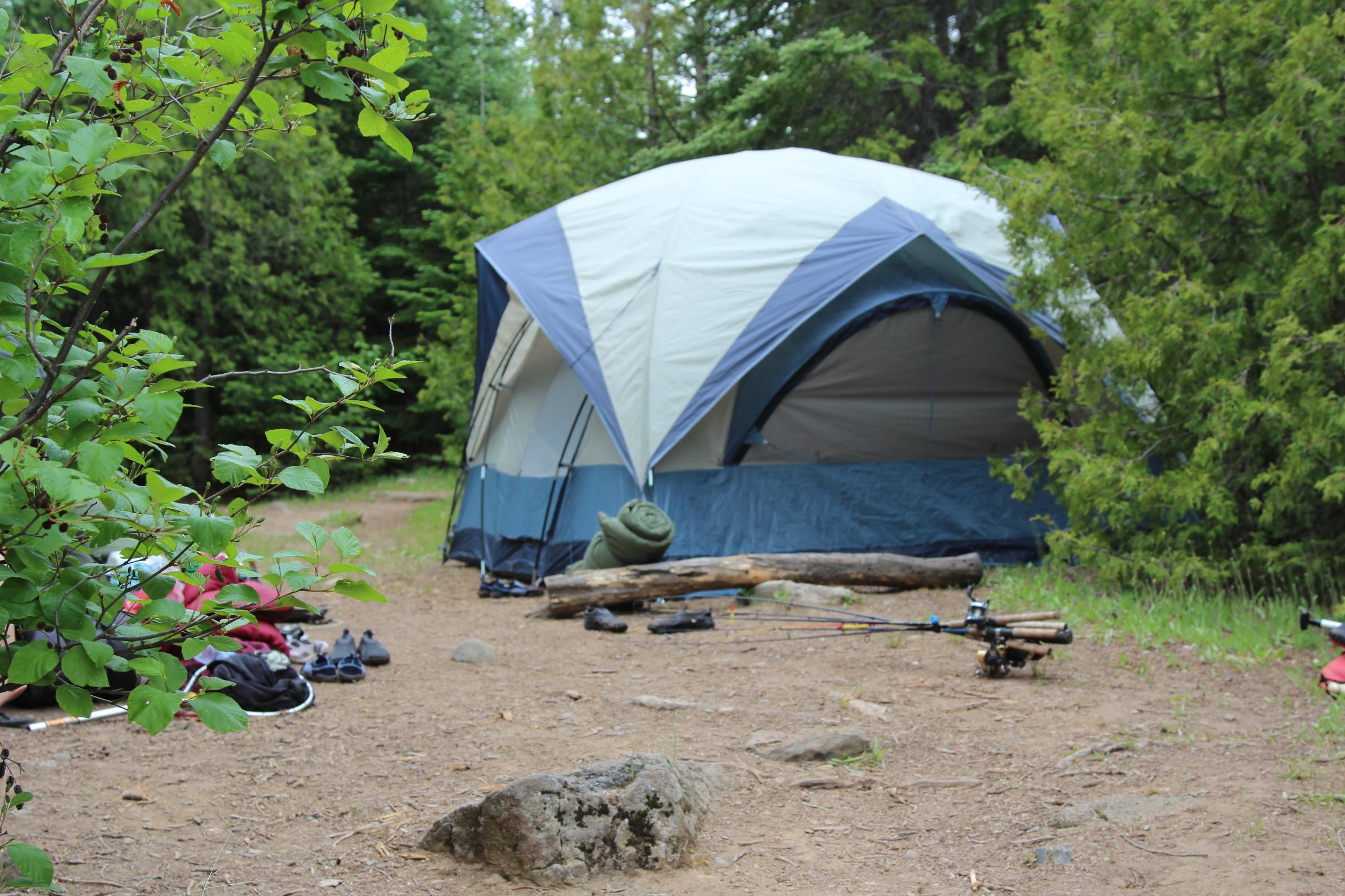 Nice rock outcropping to escape from the bugs and view the lake. 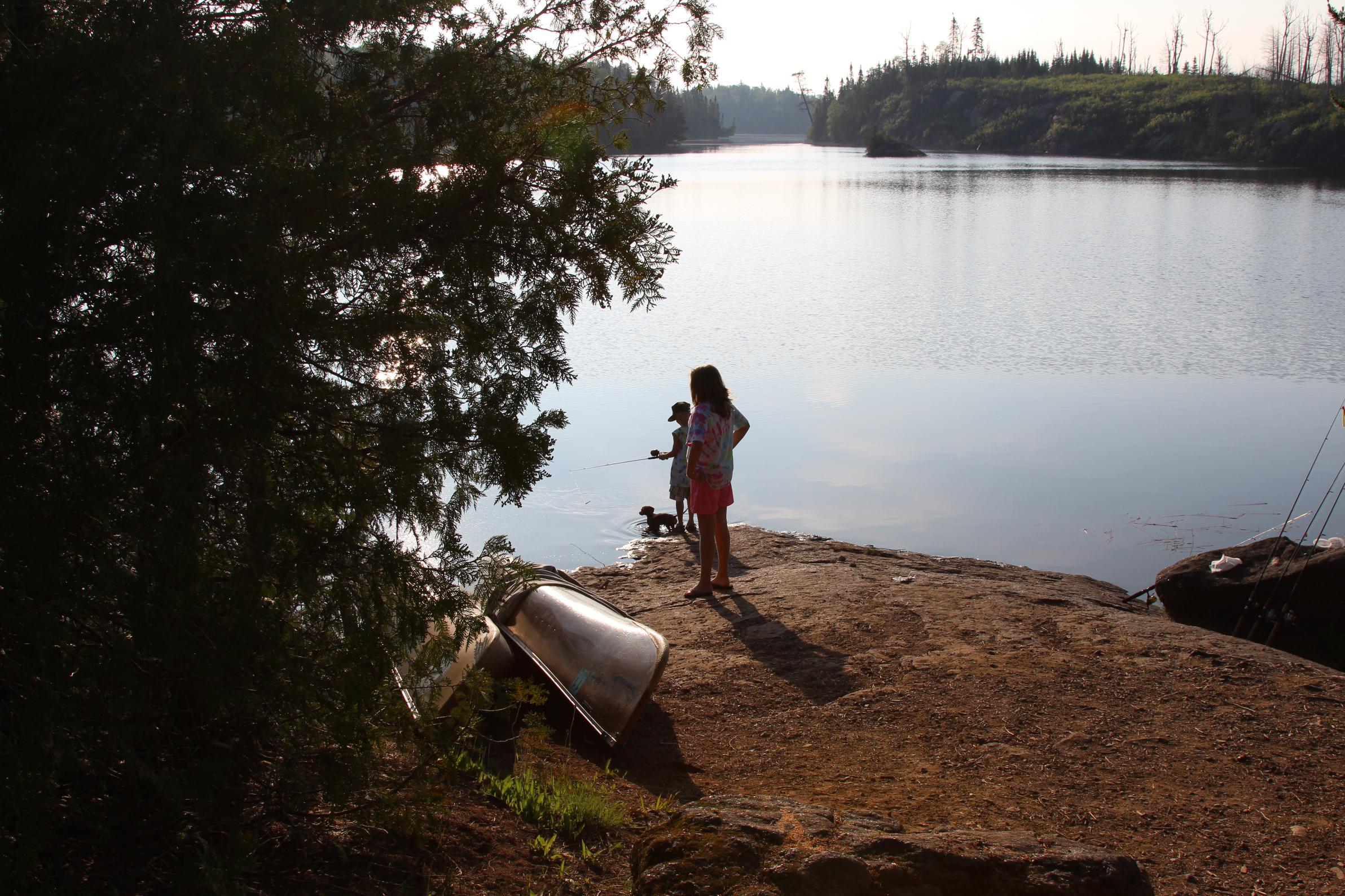 Unfortunately the view is to the east which is a pretty large burn area but it is growing back nicely. 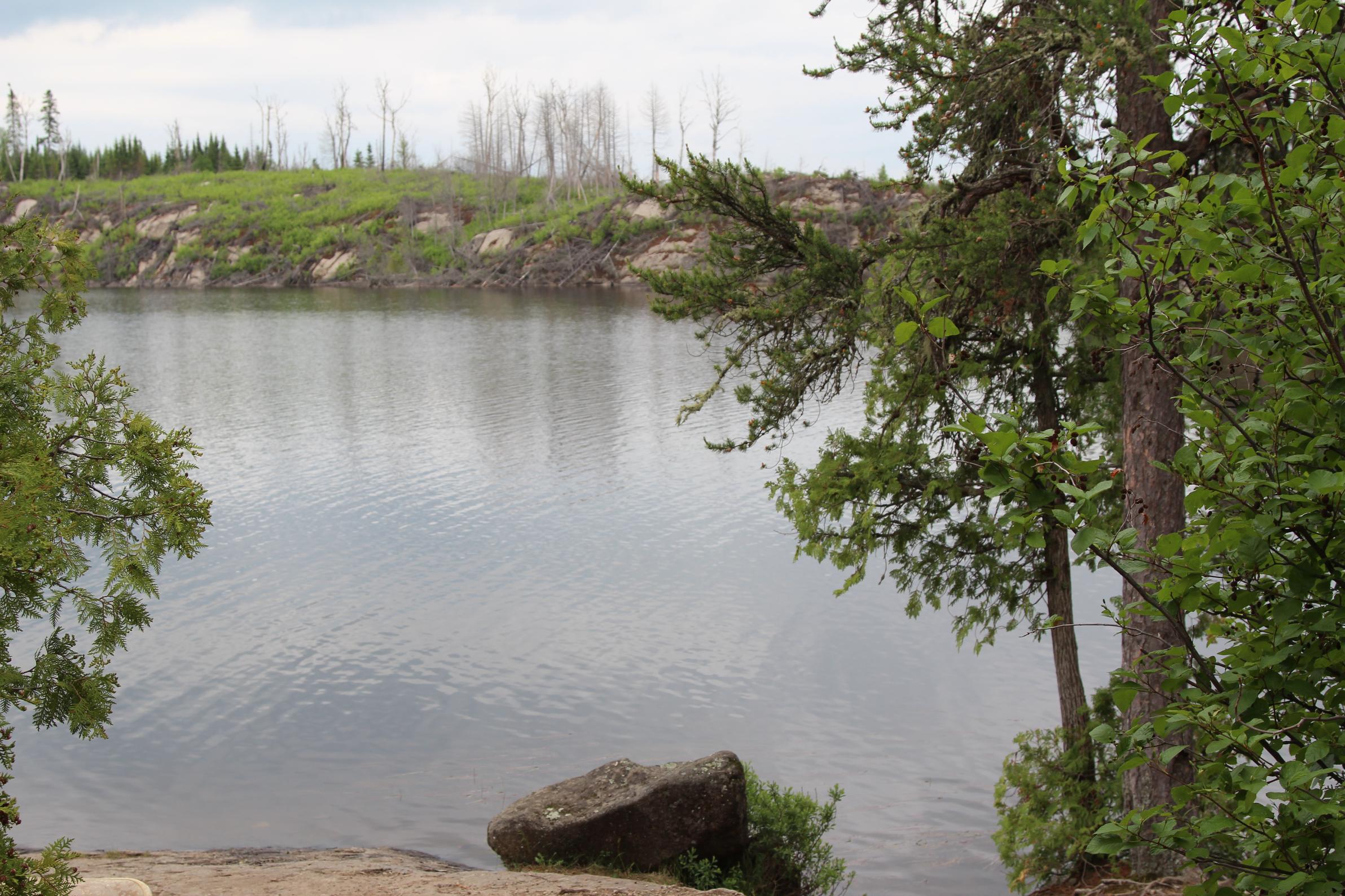 Fishing would be tough from shore all around this island as it is quite shallow all the way around. Overall I’d have to say we were happy with the site though. It landed us pretty much in the center of long island lake so there were nice exploring options to the east and west without too much effort.

We fished fairly exclusively for lake trout south of the island from east to west in varying depths with absolutely zero luck. We thought for certain the occasional pike catch would occur during our trout efforts but that didn’t happen either. We simply couldn’t catch a fish on long island lake which was a first for me anywhere in the BWCA.

We did however have a wonderful time trying to catch fish, we also explored the west end of the lake where we found the sand beach near the mouth of long island river. 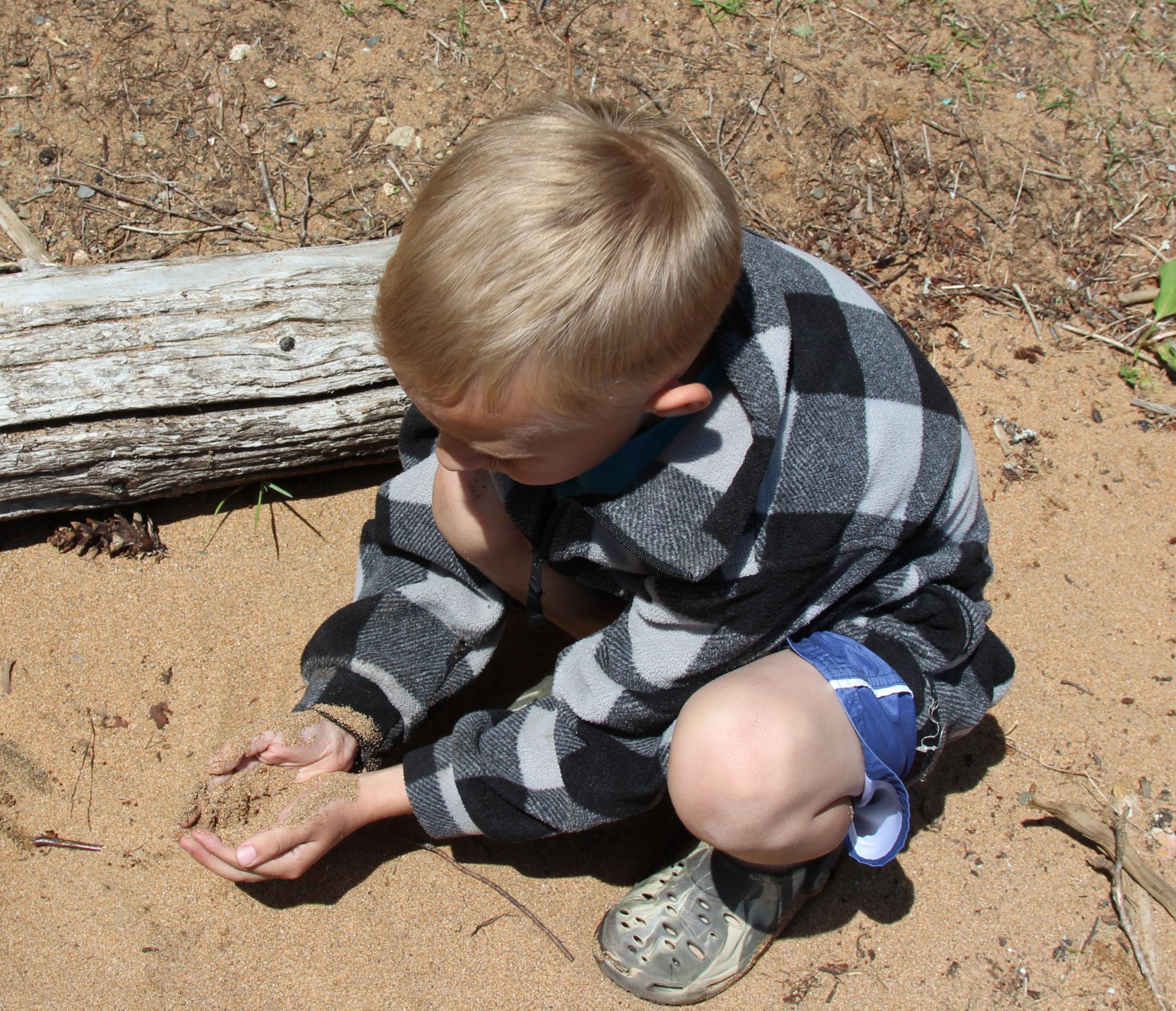 We had decent enough weather with no rain although it was cloudy and the wind was up higher than we expected, we’ve seen worse so we certainly didn’t complain.

The kids (ages 7 up to 18) did great. We absolutely loved the souris river canoes, I must have one or 2 someday.

Beautiful country with a lot of wildlife viewing opportunities and I’d have to believe the fishing can be good too. We really should have targeted the pike more to ensure some fish fry but we put all our eggs into the trout fishing basket instead.

With my group of kids with a couple of them being younger the trip was a bit challenging in the way of unpacking/repacking at each portage. The portages weren't difficult or long but There were 6 of them in and 6 of them out. That's a lot of unpacking of 3 canoes and sending these campers on their way up the trail. We became pretty smooth at at towards the end and the kevlar canoes were a lifesaver. I started by making 3 portage trips at each portage and carrying all the canoes but shortly into the trip some of the teens found the courage to try portaging a canoe. They did very well with the souris river QT17's and it made portages much faster. I would say it is a good trip, a father son or smaller group could fly through this route or probably manage some fishing along the route. I'm glad we did this trip because I have been curious about the area for a very long time. 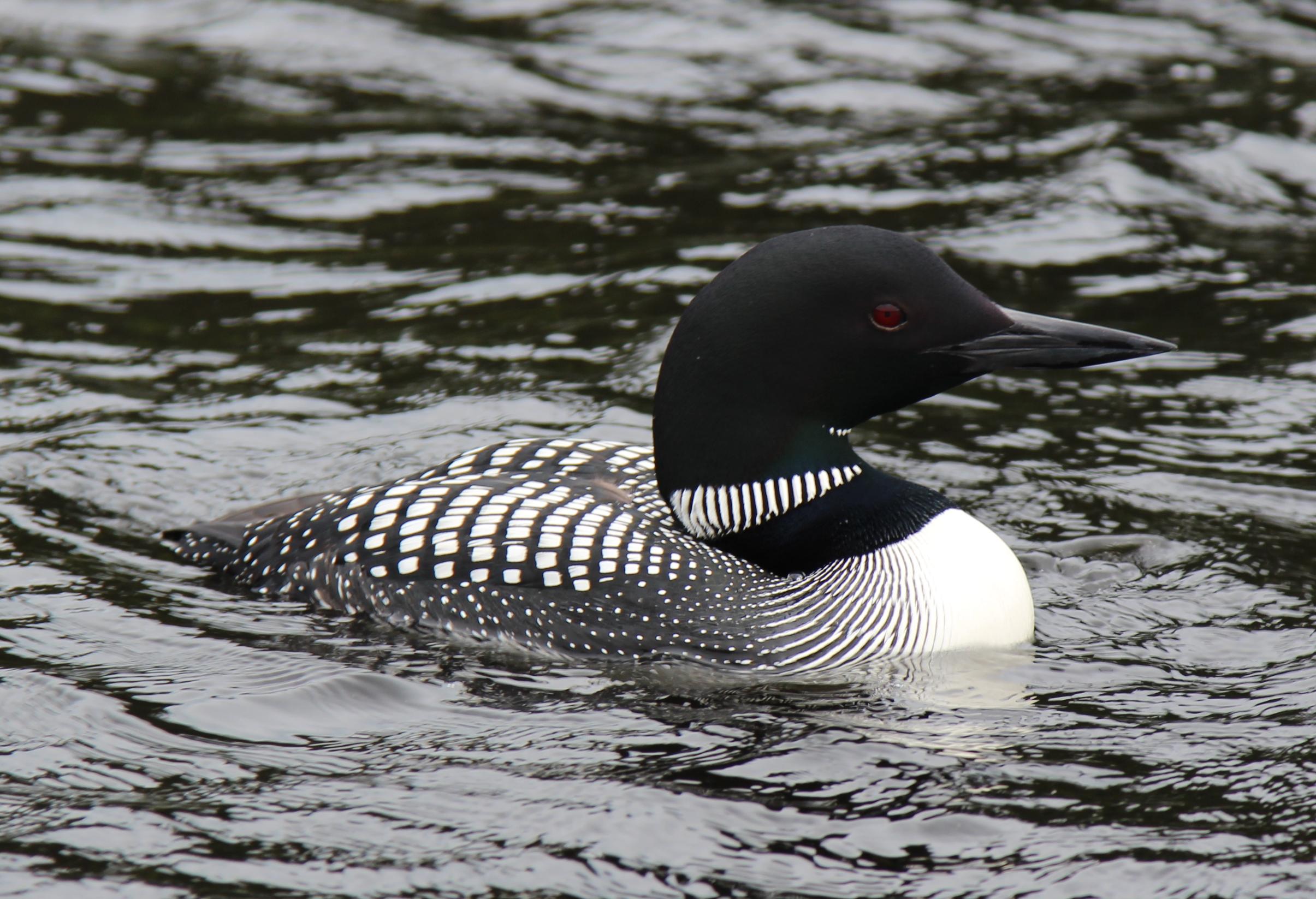 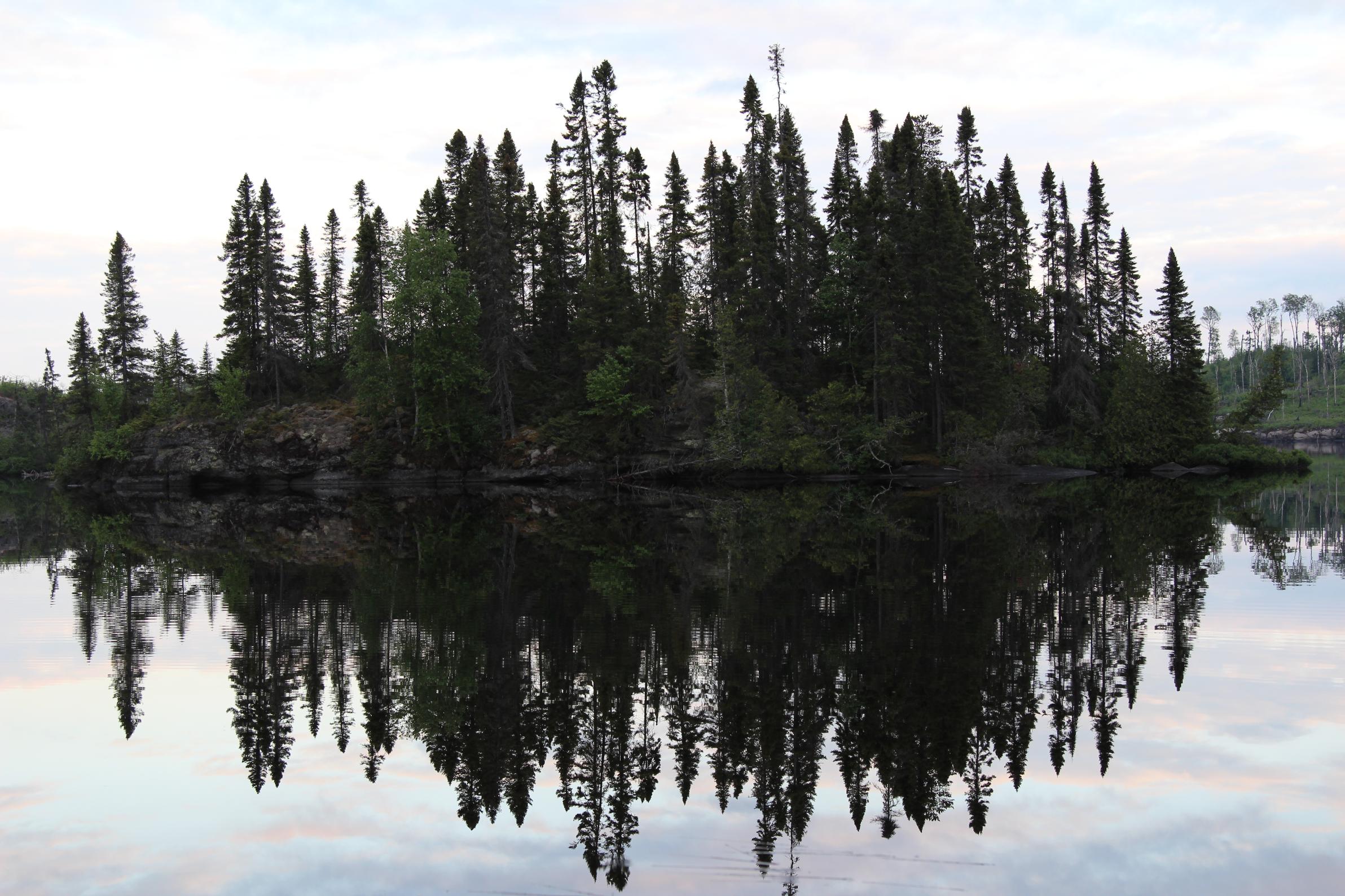 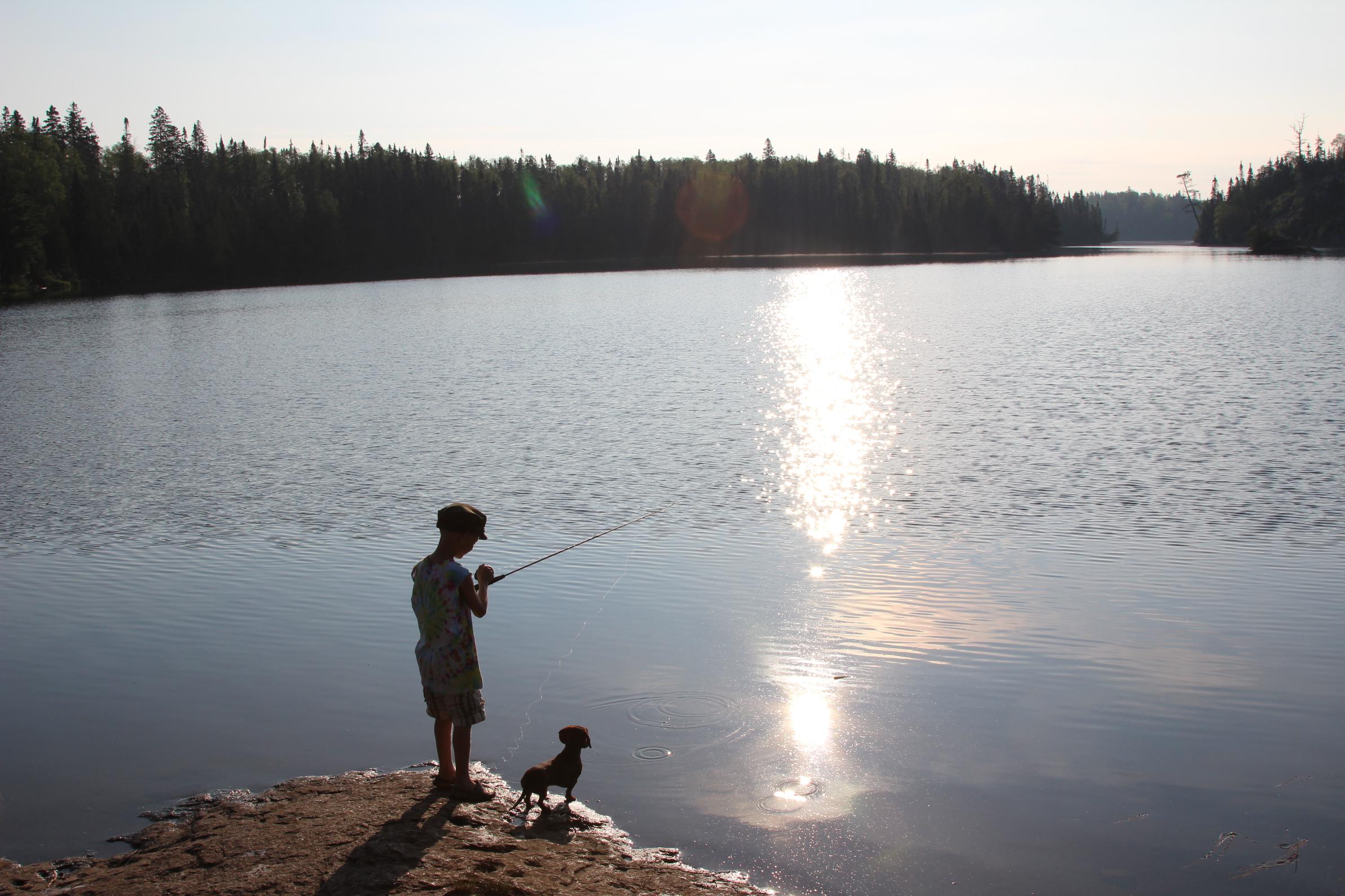 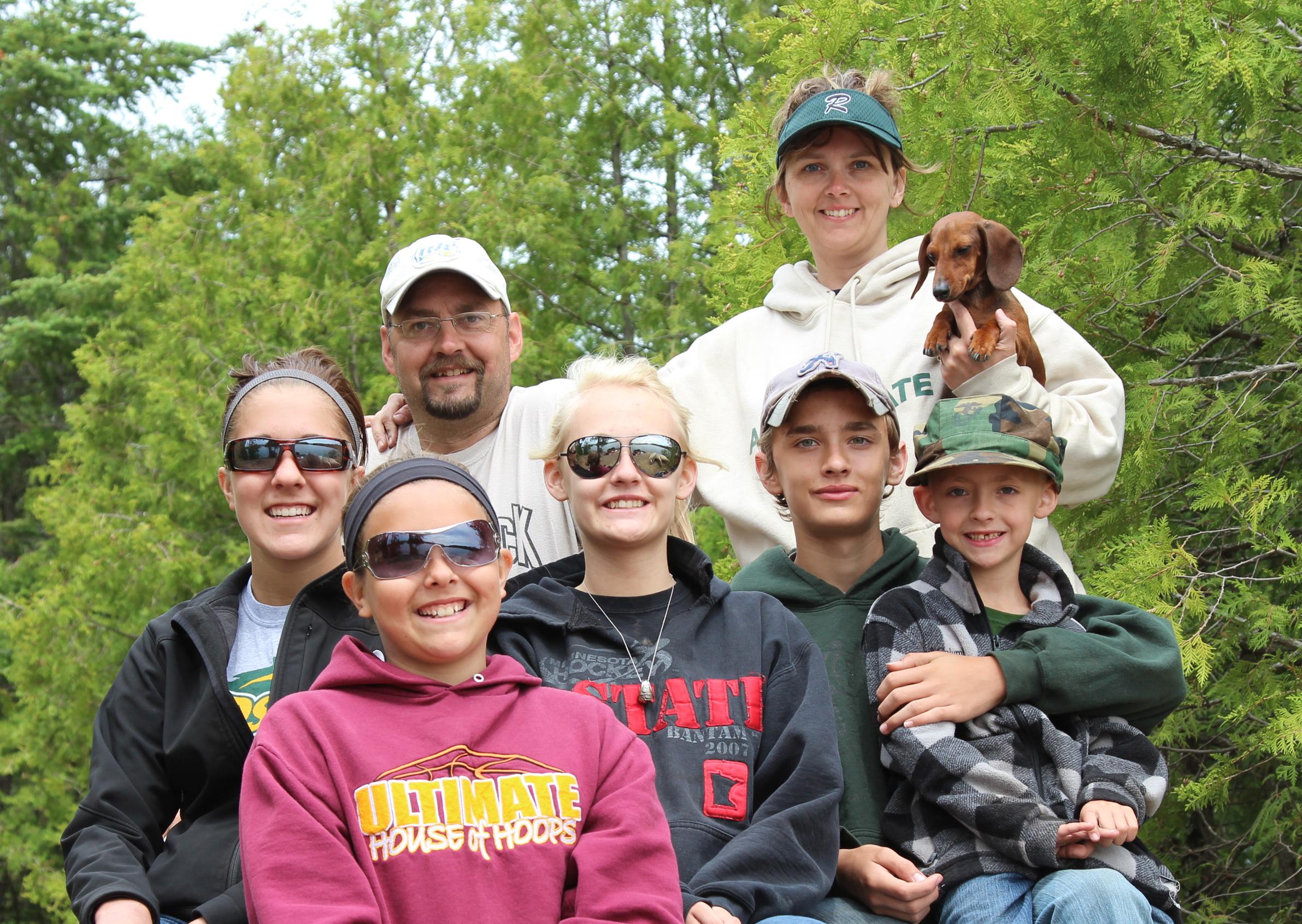 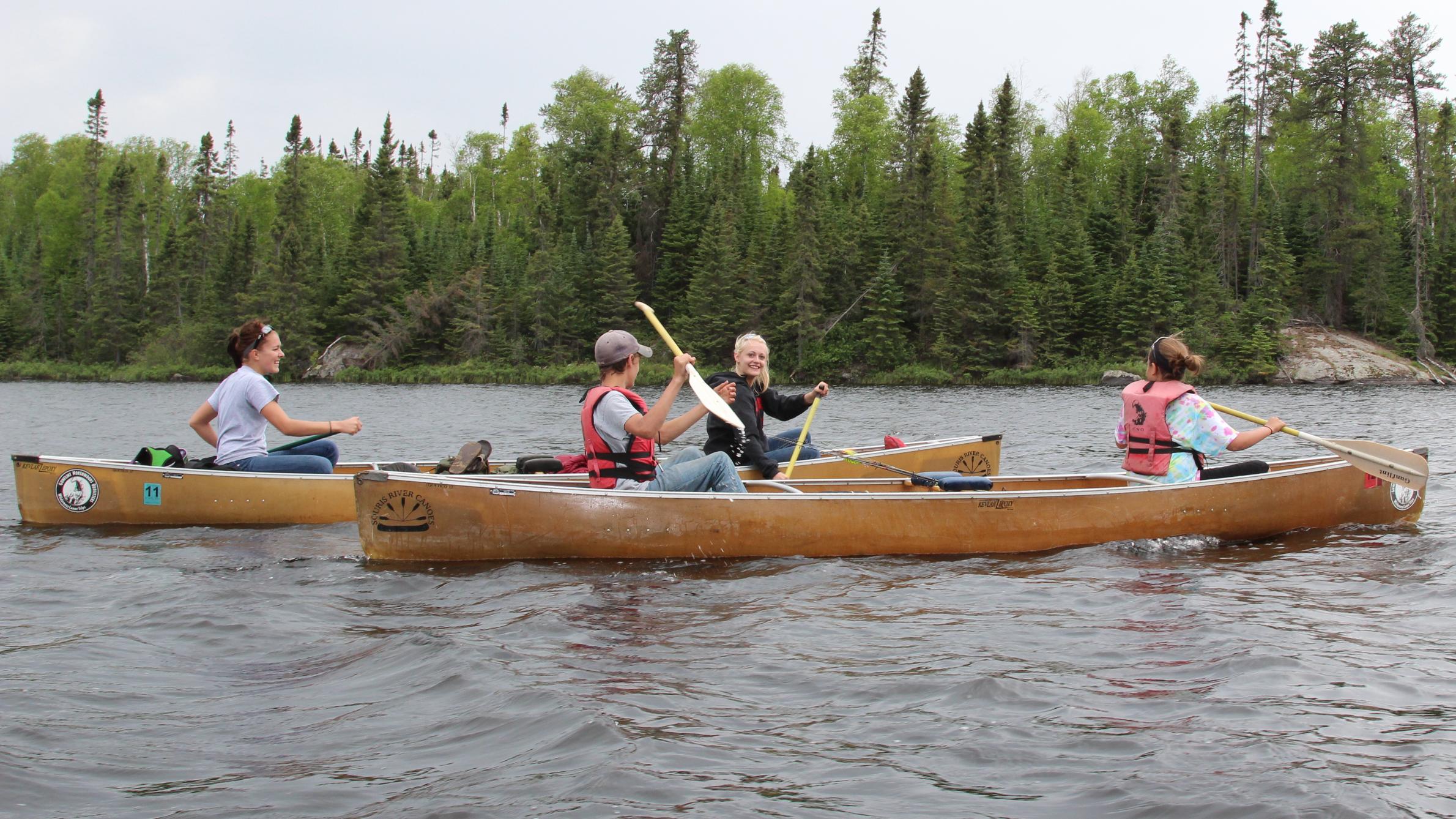 Thanks for checking our report, I hope it might help somebody plan a route in this area.