Trip Type: Paddling Canoe
Entry Date: 06/04/2011
Entry & Exit Point: Quetico
Number of Days: 9
Group Size: 2
Trip Introduction:
Last winter, I sketched out a 2011 trip for my son-in-law Joe and I into the south-central park of Quetico via Prairie Portage where neither of us had been. The “plan” was to make our way up to Kahshahpiwi then over to Burt and to loop back through McIntyre and Sarah. However, when we saw Jeremy Dickson of Canoe Canada at the All-Canada show and learned about the “King of Quetico” trip, we immediately signed on. We would paddle the park from north to south (Nym to Basswood, roughly 60 miles), cache CC’s canoe there for the next party (who would reverse our trip) and fly back to Atikokan seeing the park from the air. (The trip was designed as 8 days at $535/person including canoe rental and park fees, but we paid extra for an additional day.) The 850-mile drive up was uneventful with an overnight stop at Black River Falls, WI at the “orange moose” Best Western motel. We arrived in Atikokan about 5 p.m. the next day wondering if CC’s staff had left for the day. Jim Clark greeted us and wanted to sit down with the park map right away. (Jim had created the “King” trip.) In the process of discussing our route and pickup, he told us that Homeland Security needed our planned itinerary lake-by-lake and that they reportedly had “drones” (unmanned aerial vehicles/UAVs) patrolling the park. This provided us with fodder for jokes throughout the trip about seeing a drone while taking a leak back in the woods, etc. We went for supper at the Outdoorsman Café, then came back and talked awhile with some guys who were going to fly to one of the fishing outposts the next day. One of them told a story about bears getting food packs and used the phrase “dark as the inside of a cow.”(!) That expression would crop up a few times during our trip. Then, after messing with some of our gear for a bit and getting settled in our “penthouse” bunks we tried to get some sleep.
Discuss Trip: View Discussion Thread (10 messages)
Day 1 of 9
Saturday, June 04, 2011:
Nym Lake to Jesse Lake, via Batchewaung, Little Batchewaung Bay, Batchewaung Bay, Pickerel & Maria. (About 11 miles) 3 portages of 830m., 270m. & 710m., plus a canoe walk-through at the narrows out of Batchewaung Bay. (Distances in meters per Chrismar map unless noted otherwise.) 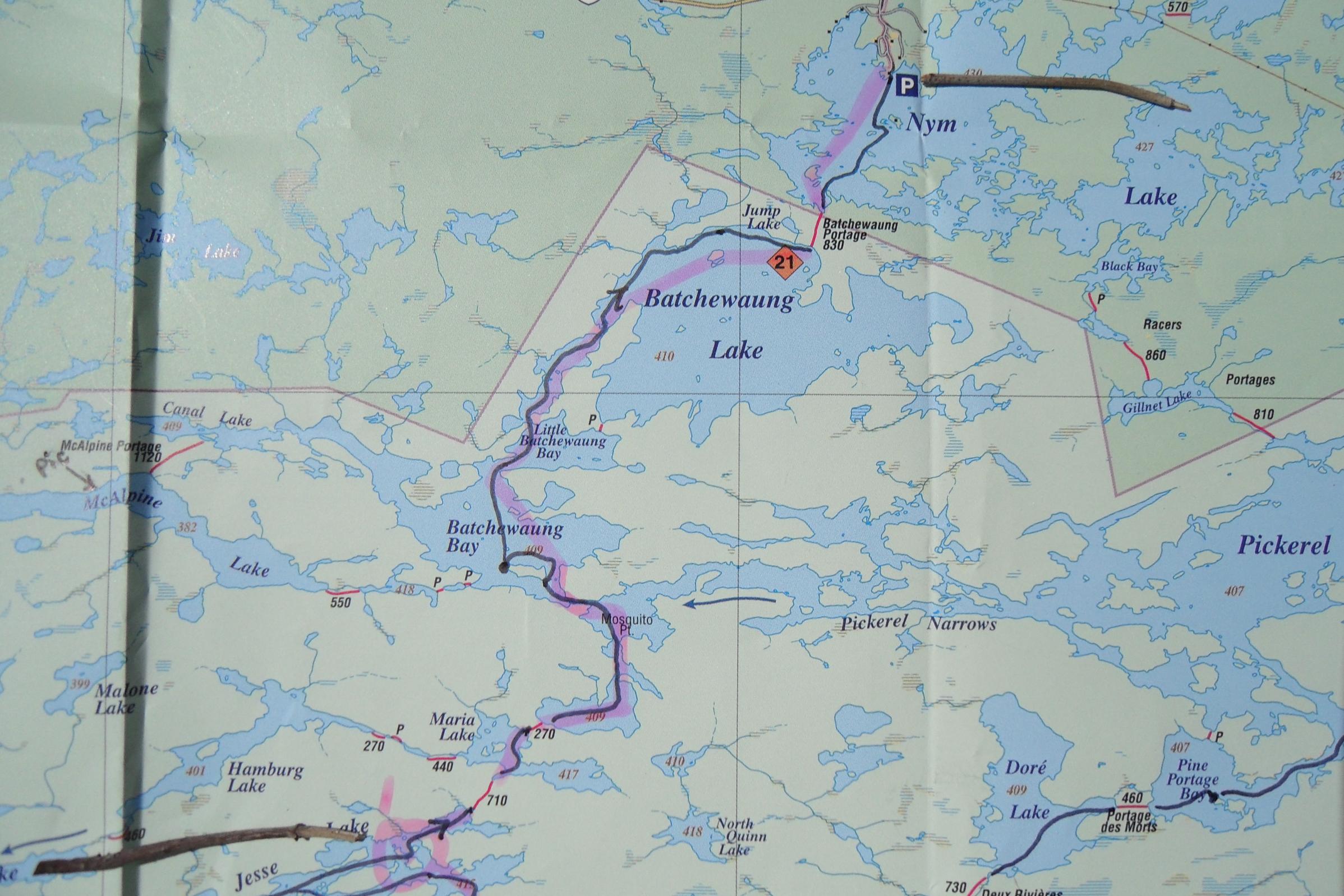 We got up early and went to Robin’s for coffee and “brekwiches.” It looked like a beautiful, cloudless blue-sky day (unlike ANY other day I have started in Quetico). Jim drove us to Nym himself. At the put-in, he literally pointed out the right direction towards the portage to Batch. (I surprised him with my map marked with a 210 degree heading from where we stood and he said that he should get me to “teach this stuff.”) We loaded as Jim drove off. Our gear consisted of a Granite Gear Superior One pack, blue food barrel and snack vault in an old Lowe backpack, a new Kondos guide pack, four fishing rods/reels strapped into CC’s Souris River Kevlar Le Tigre canoe.
The wind was already kicking up and it was only seven o’clock, so we paddled steadily for the distant island and point that are closest to the portage. On the way we paddled near a fisherman in a small motorboat. We then navigated the last little bit in the lee of the southern shore to find the take out landing. We spotted some gear left by another party at the landing spot and figured we’d meet them on the trail. Sure enough, on our first carry they met us with news that a moose had been on the trail and was last seen crashing off to our right.(!) We saw the moose tracks and “skid marks” where he’d been startled, I guess. 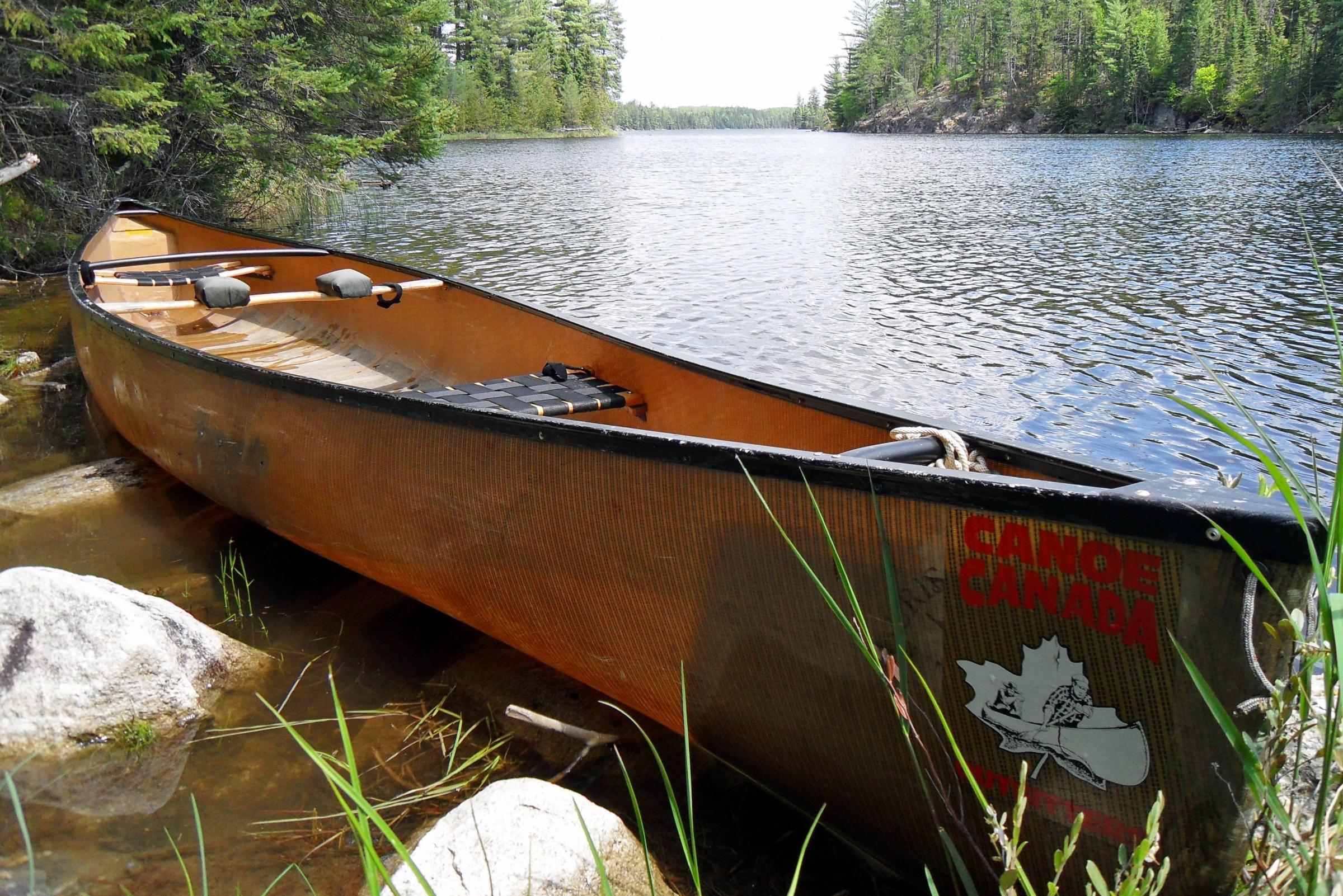 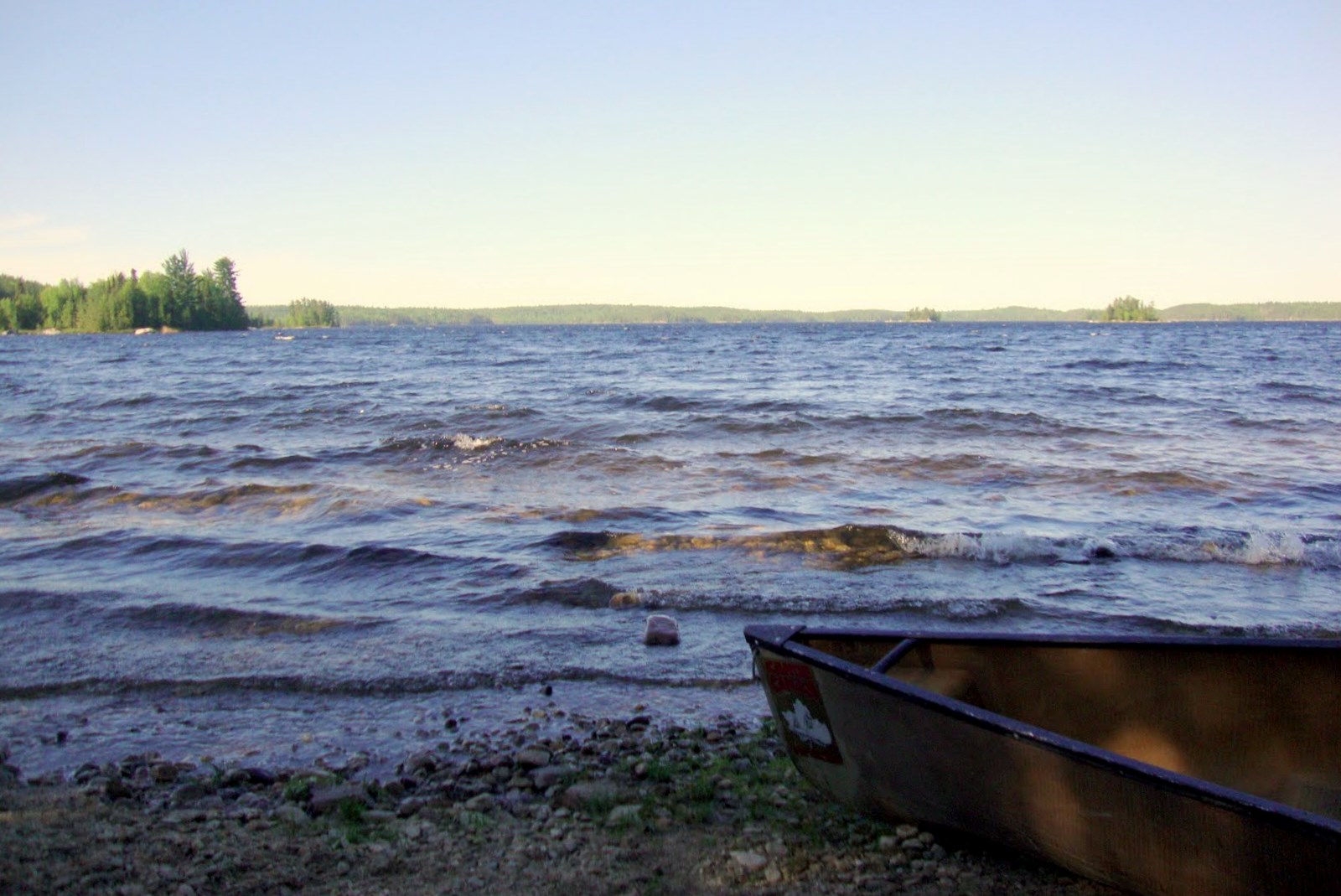 After our second carry we stood on Batch’s shore and surveyed a scene of strong southwest wind and rolling waves and whitecaps. The other group was nowhere in sight. We decided to head west hugging the shore and, with some reservations, forced the canoe into the “surf” and headed out. In almost no time, we hit a wave that showered Joe in the bow and made us wonder if we should be doing this. I called to Joe and said we had to paddle hard and steady and not so westerly and get used to the roller coaster waves and we’d be all right. I did my best to steer from the stern and keep our angle of attack okay. We took in a little more water a few times but made steady progress and after about a half hour made the lee of a group of islands and then landed on one for a breather and a snack.
While we snacked and recovered, we looked for the other canoe, but never saw it. After a bit the wind actually seemed to slack off some, so we headed back out again. The rest of the morning we made slow but steady progress south seeing several other canoes and one guy fishing from shore at a campsite. By the time we got to the narrows at the SE corner of Batchewaung Bay, where we saw four young guys in two canoes, it was close to lunch time. At this pinch point we had to get out of the canoe to walk through the shallows then when we got back in the current caught us and we went down the little riffle backwards!
After this we stopped and had a lunch of hard salami and cojack cheese on bagels on a rocky point between the “pinch” and Mosquito Point. We tried to count up the canoes and people we’d seen that morning and came up with seven canoes and twelve persons – by far the most we’d ever seen in one day in Quetico! That would change. Then after a short rest and recalling the eagles and loons we’d seen already, we continued on. 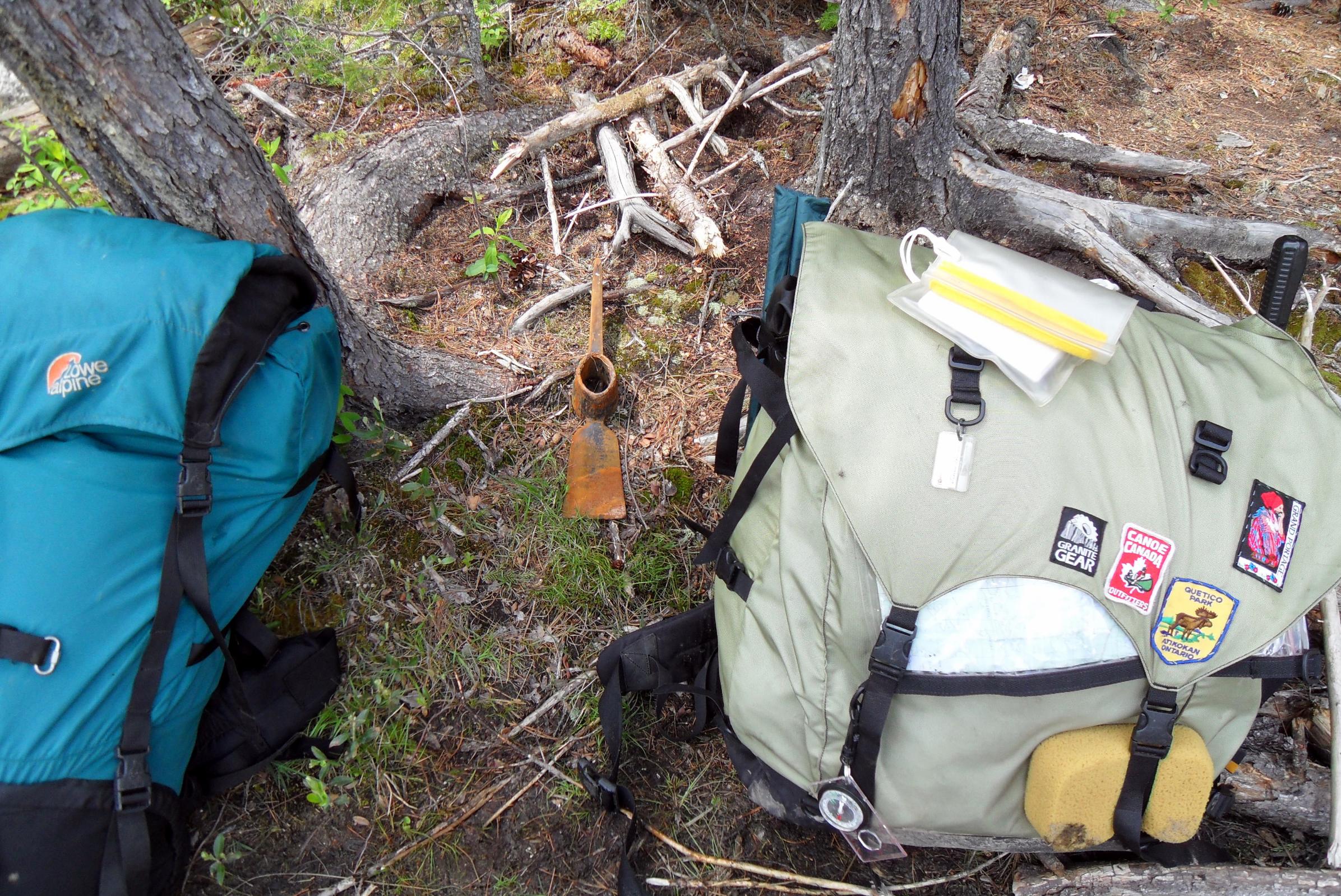 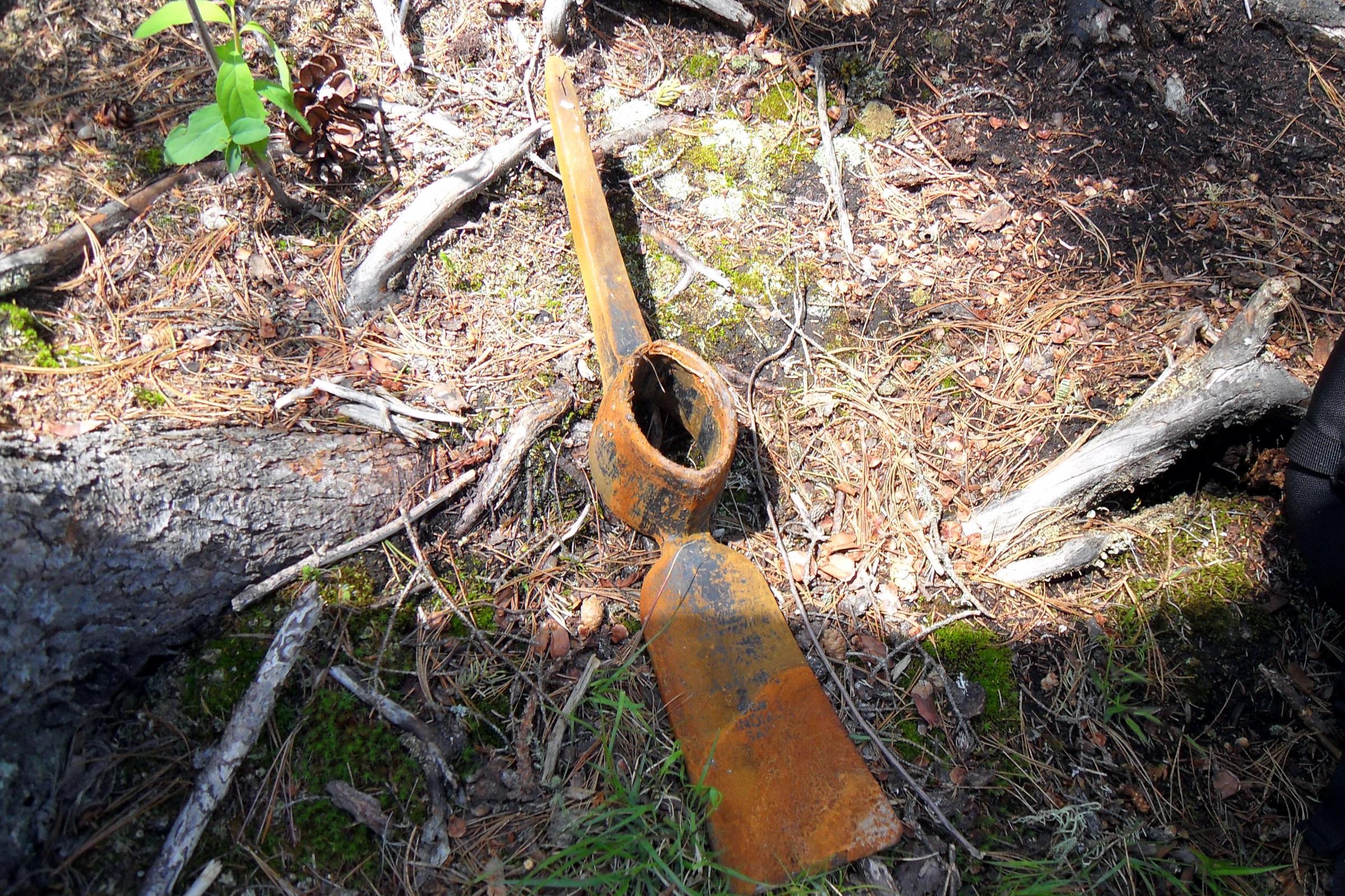 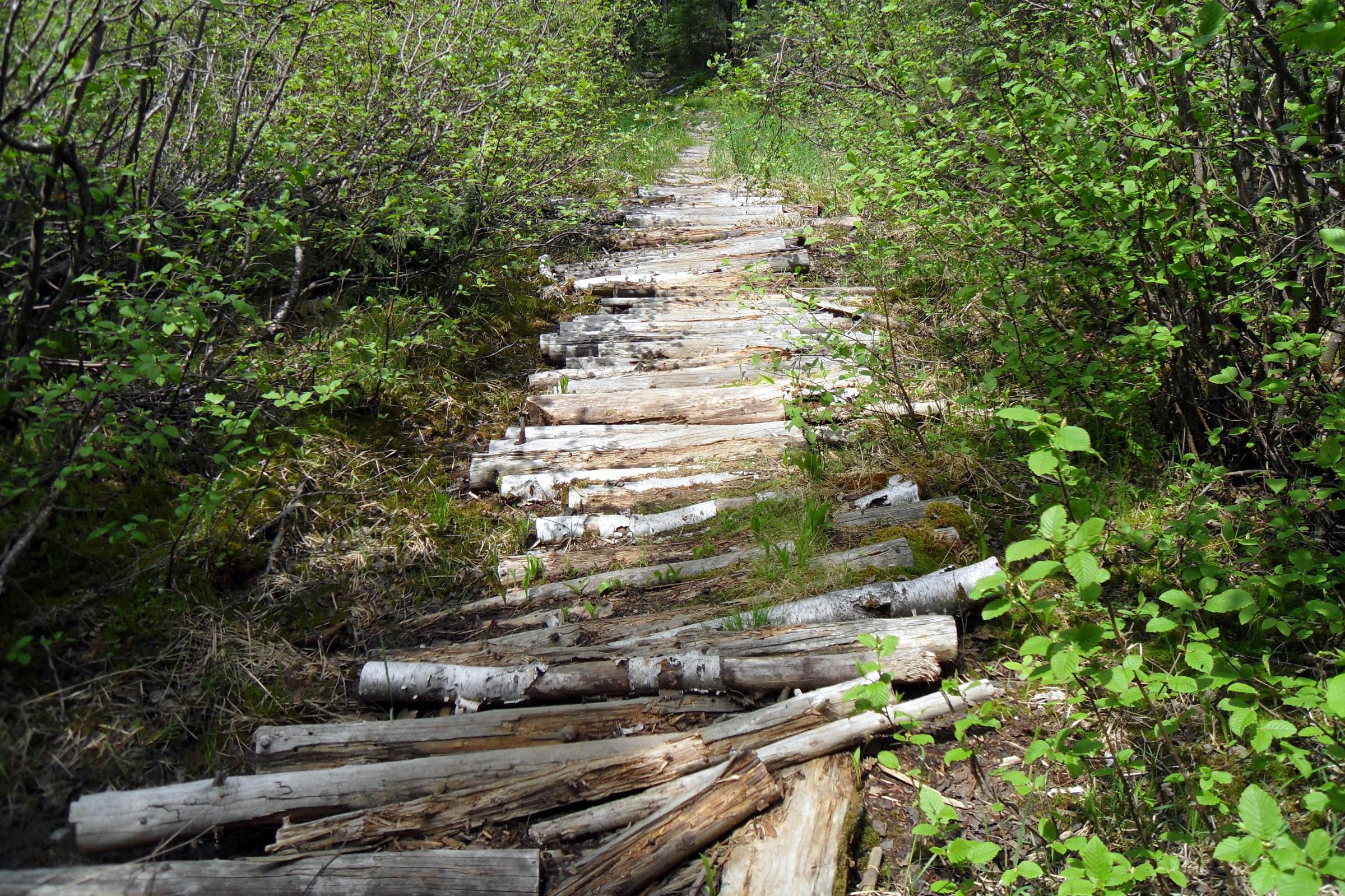 It was remarkably calm around Mosquito Point and over into Maria Lake which was my pre-trip tentative day one campsite lake, but since it was still early and we were feeling good we didn’t stop on Maria (though all sites appeared open) and pushed on for Jesse. Jim had mentioned “improvements” to the 710m. Maria-Jesse portage, but we were surprised to see the unusual-looking boulder and dirt construction project. It looked strange but was solid footing. 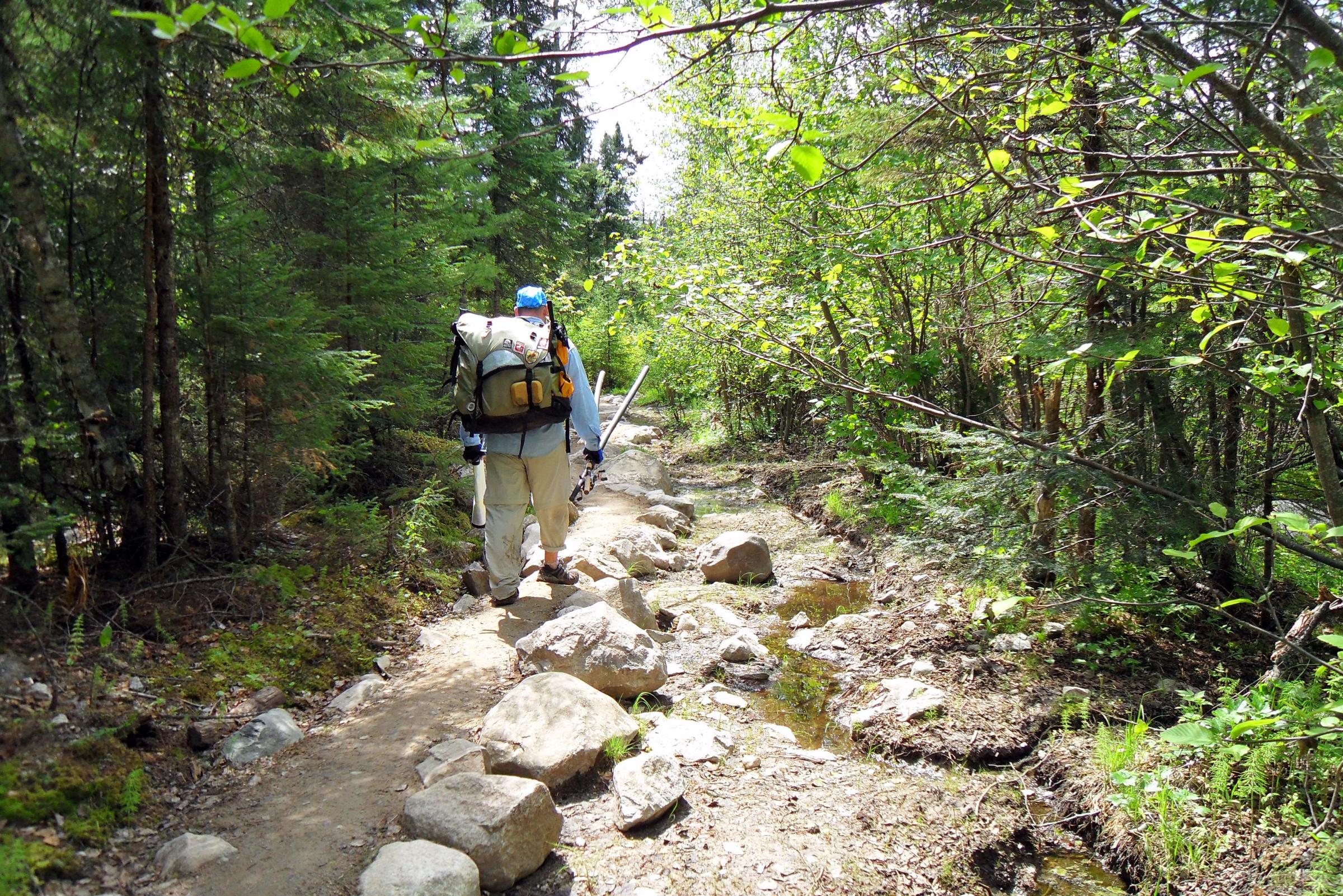 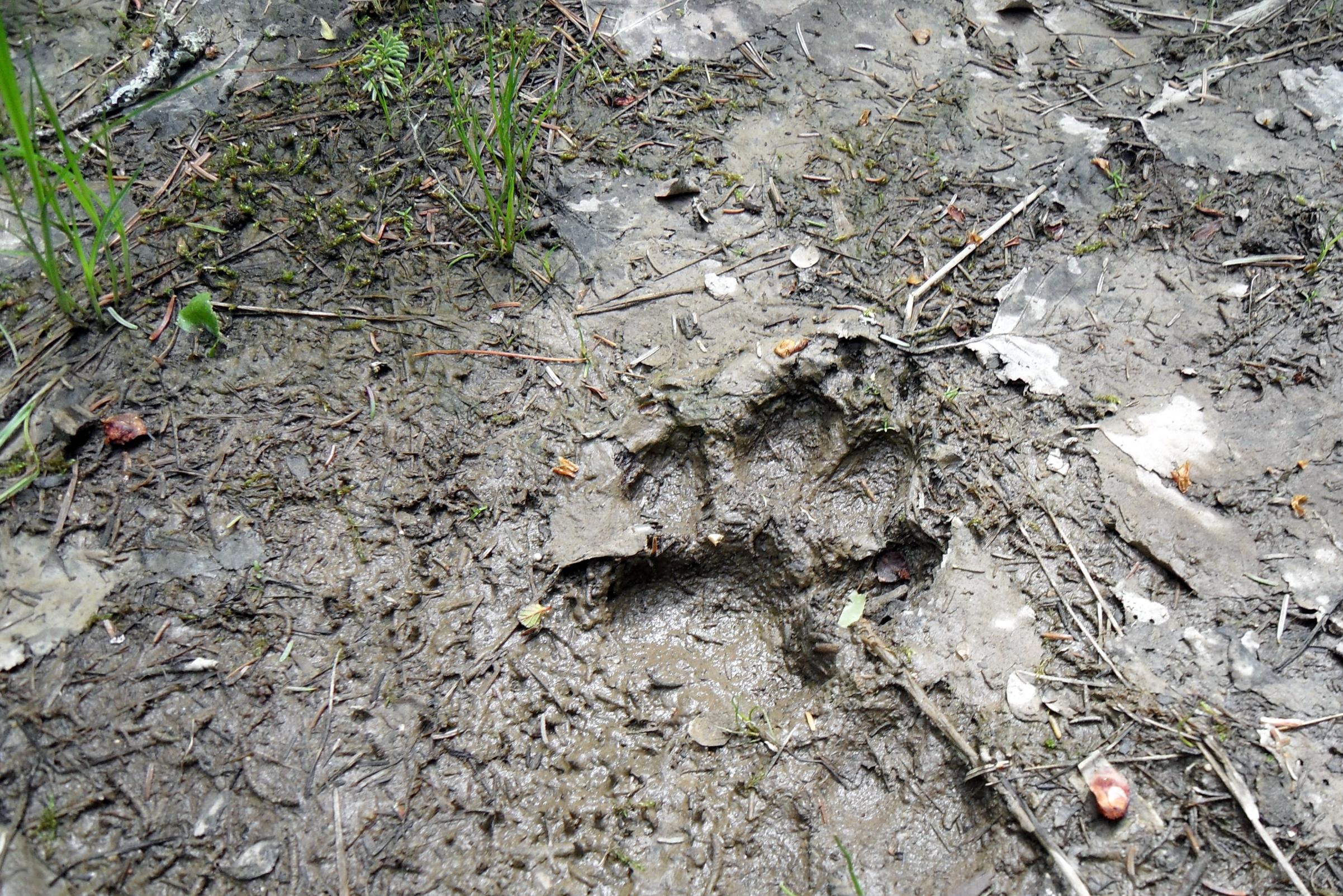 Once on Jesse, we checked out a couple of sites before the “main” body of the lake, but they were disappointing. Entering the main body we headed for the over-used sprawling site on the island and found it empty and claimed it. I had lunched at this site in 1997 and enjoyed the great views, multi-levels and “open floor plan.” We pitched camp, had supper – cashew chicken (chicken/rice/green pepper/mushrooms/ginger/garlic/cashews/soy sauce) – while couple gulls and a pine squirrel hung around looking for a free meal. We enjoyed the rest of the evening and got the NOAA weather radio forecast saying tomorrow would be fair and warm. 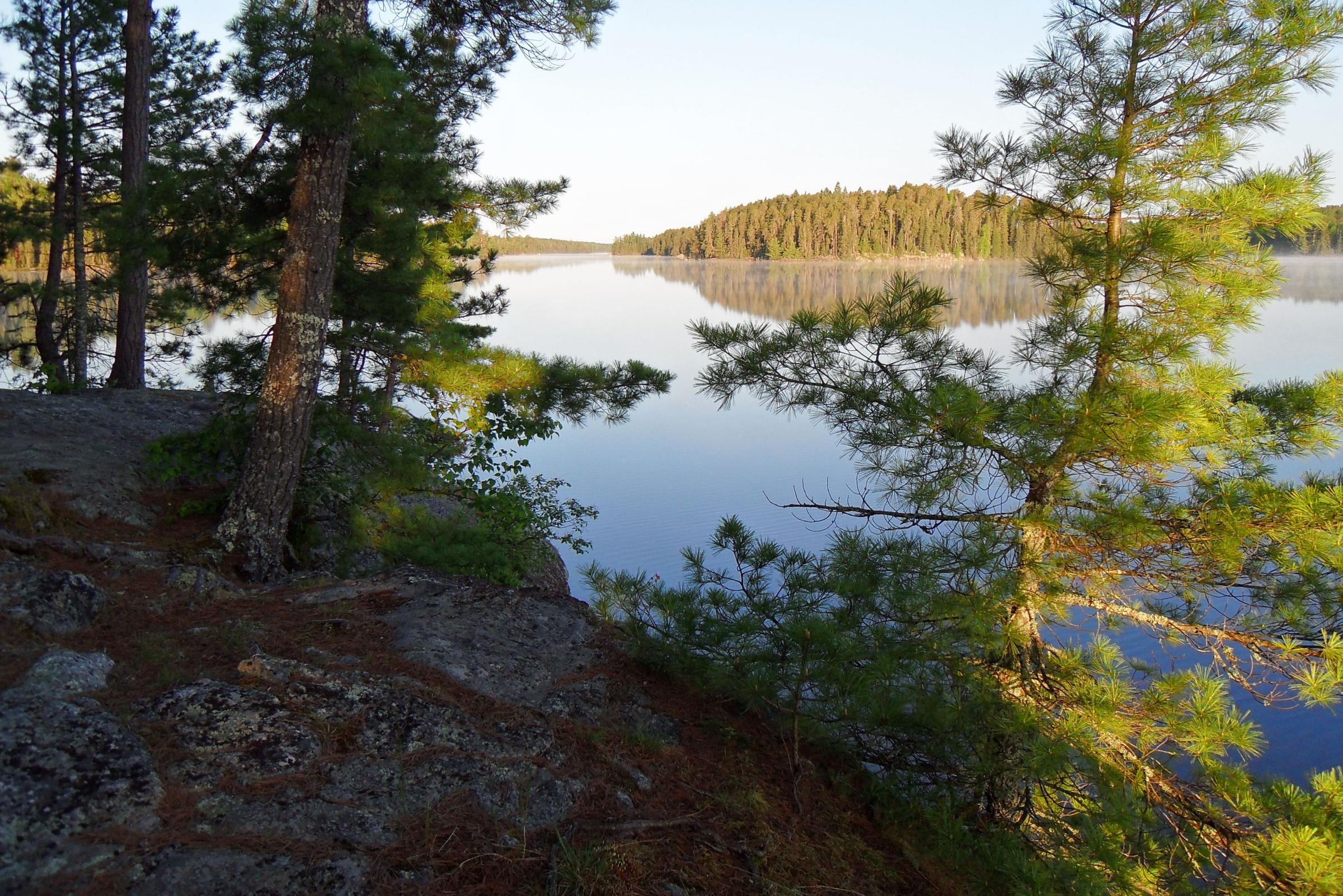 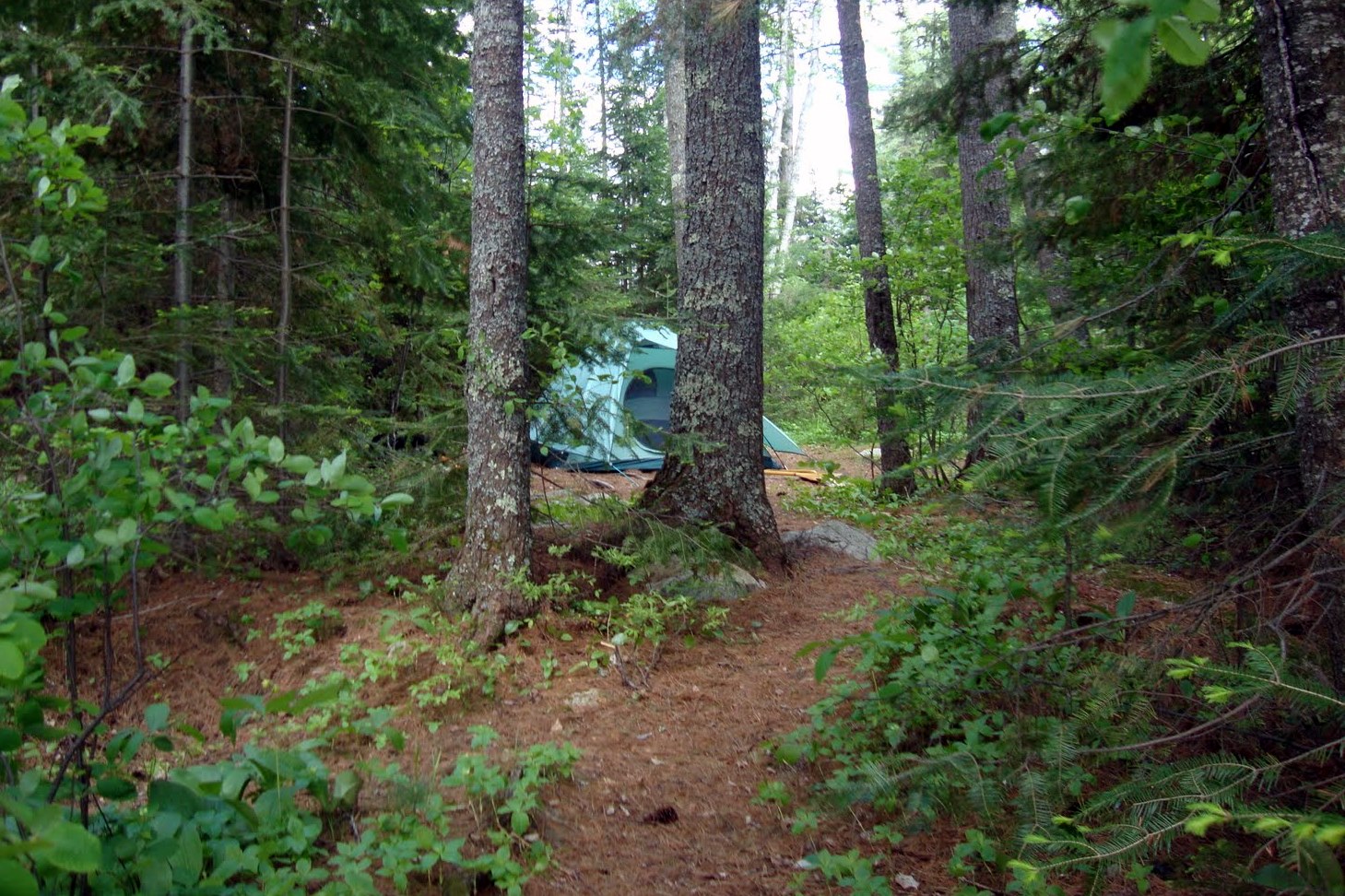 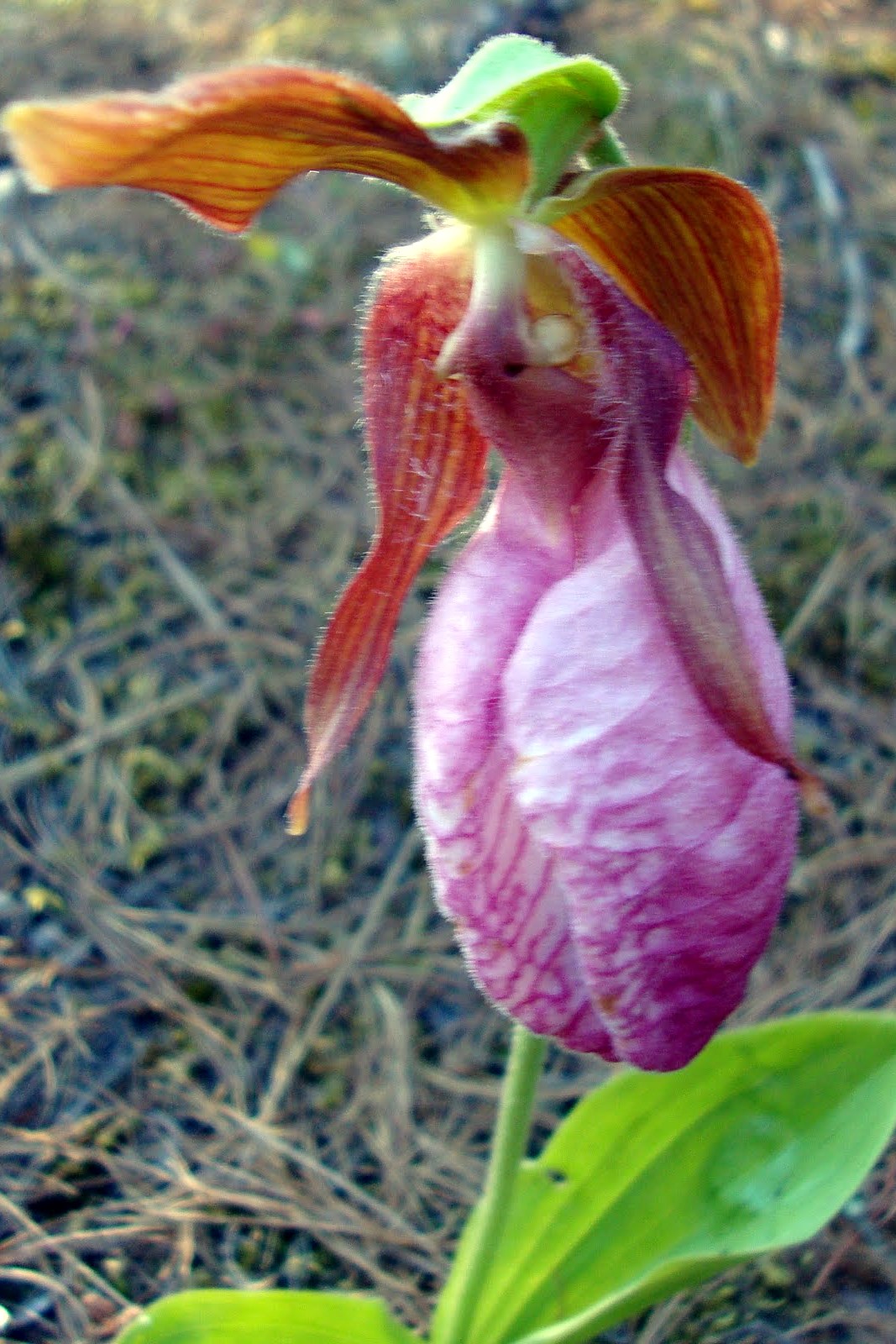 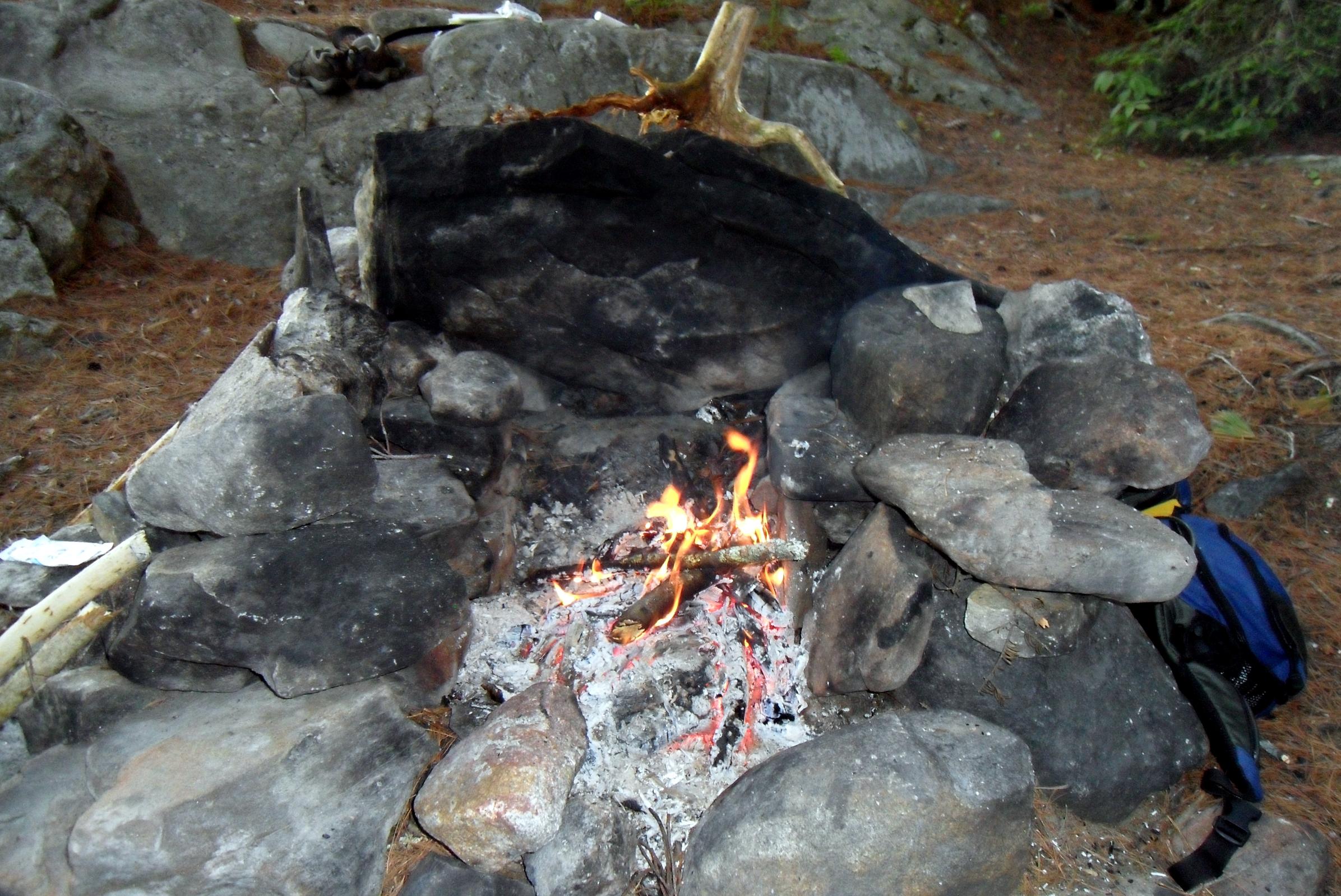 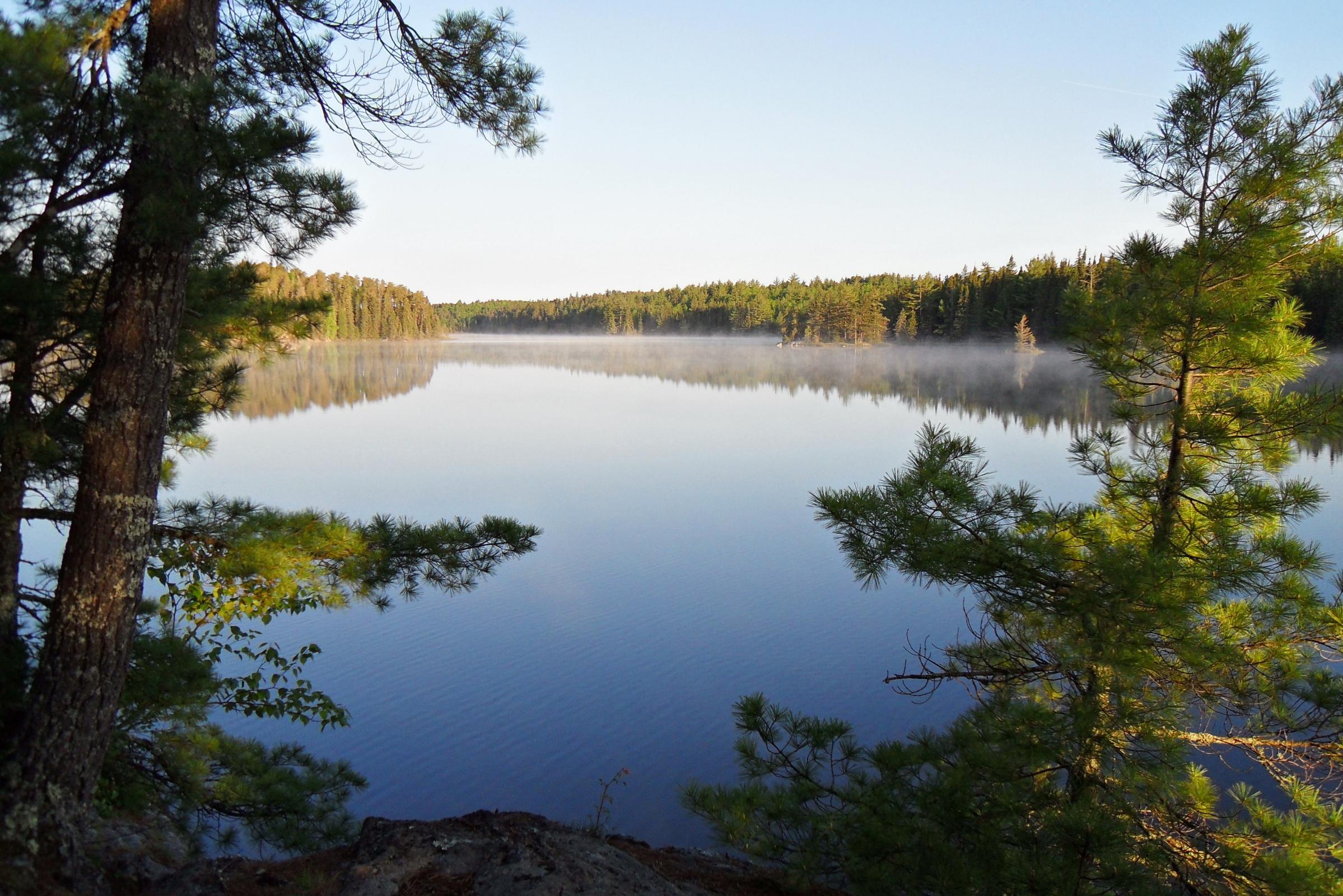 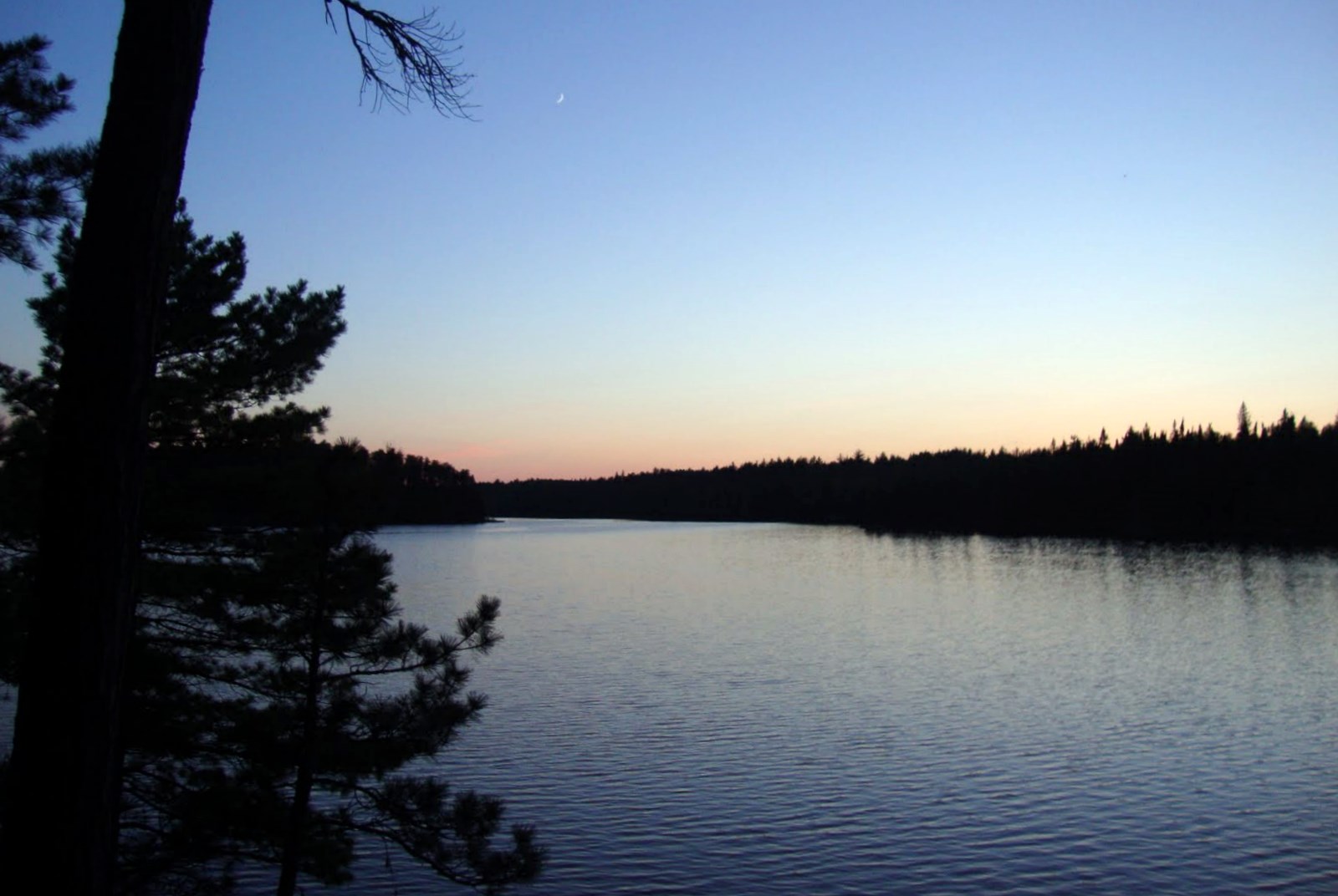