Trip Type: Paddling Canoe
Entry Date: 06/12/2011
Entry & Exit Point: Moose Lake to Prairie Portage (EP G)
Number of Days: 5
Group Size: 2
Trip Introduction:
Tripped started out with a run in with a sow bear and her yearling, chasing us from our initial campsite. Rest of trip was dampened by a bit of bear paranoia. Had pretty good fishing and weather was great.
Discuss Trip: View Discussion Thread (18 messages)
Day 1 of 5
Sunday, June 12, 2011

Our group: Two guys in our mid-30s, both had been to the BWCA before back in High School/College. He had been to Knife Lake area 2 years prior.

Our mission: Base camp in eastern end of the South Arm of Knife Lake. Primary purpose was fishing for Pike, Bass, Walleyes, Lake Trout

Headed up to Ely from the Twin Cities Saturday afternoon, grabbed our last minute supplies and some donuts for the morning at the grocery store. Little did we know the trouble those donuts would cause…

Sunday Woke up early to catch our ride to the entry point on Moose Lake, we were taking a taxi to Prairie Portage as our destination was the eastern end of Knife lake for a few days of fishing. Taxi and initial paddling was beautiful, we made good time, weather was nice, and portages were easy. We made it to Isle of Pines around 1 pm and stopped on an island/peninsula about 2 miles east of Robbins Island where my paddling partner had camped 2 years prior. We planned to stop there for lunch and decide how much farther we wanted to go. We knew of the forest fire area to the east so we needed to decide if we wanted to push to the eastern end of the south arm of Knife or to stay west of the fire area.

We had a cold lunch of summer sausage sandwiches and the leftover donuts from breakfast. After resting for a while we decided to just camp at that location and maybe move to the south arm of Knife the next day. This way we could check out some of the areas he had experienced the few years before. We had the food pack out so decided to hang that up first and then set up camp. After hanging the pack we started to set up our tent, about halfway through setting up the tent we turned around a saw a bear about 20-30 feet away walking through our camp. Obviously we were startled by the bear and the adrenaline started pumping. Of course we were a little scared but I remember thinking how odd it was that the bear had come into camp when we were making plenty of noise talking while setting up my new tent and we had not been cooking so scent should not have been an issue. We had bear spray along but it was still in the canoe, in a pack, down the hill about 50 yards away. I had done my reading on bear preparedness so knew we should just make noise and try to scare the bear away. We yelled at it, threw rocks, and slowly approached the bear so it would go away. It retreated about 20 yards back just into the adjacent brush and turned around and looked at us. It was not very afraid of us but was not aggressive either. It mulled around in the brush but would not leave. We continued to yell at it while talking over what our next steps were. I ran and got the bear mace in case it was needed. We then saw a second larger bear and figured a sow and her yearling stumbled upon the campsite. She was not afraid of us either but did not approach into the campsite clearing. We decided to leave the site since the bears were not going to leave and even if they did leave for the time being, we would not be comfortable sleeping there at night. We probably did the stand off with the bears for 15-20 minutes before we decided that my partner would stand guard with the bear spray while I packed up the tent and food pack. We also had my GPS, maps, and a few odds n ends on the ground near the fire grate as well. I got everything to the canoe, we did a quick once over of our gear and discovered I was missing my day pack which included my fishing reels, camera, bug spray, sunblock, journal, toiletries, flash lights, book, and a few other items. We had only taken gear out at the fire grate area which is where we saw the first bear. We went back to the fire grate area (bears still milling around in the bushes) and no day pack. We concluded the sow bear must have drug it into the trees while we were not looking during tent setup and that we only saw the yearling later after she had pulled the pack out of sight. Having the pack was likely part of the reason why they would not leave. I remembered that after we hung the food pack we had left out what was left of the donuts. I had put them into my daypack until we set up camp, at which point we planned to eat the rest – pack the garbage, etc.

We decided to leave the pack, knowing that once the bears got ahold of some food they would likely not be leaving anytime soon – and – we did not want to tangle with a momma bear and her offspring. We left and regrouped on a nearby island to plan our next steps. We decided to push east as the campsites in the area seemed to be taken and return the next day to see about the pack. Luckily the maps and GPS were not in the bag! By now it was around 4-5pm and we were starting to get worried about finding another campsite for the night. We pushed east into the forest fire area where all of the campsites were unusable. Just before the narrows we found a campsite in pretty good shape and the fire had missed. We were fatigued from the day’s traveling and the bear encounter so decided to camp there. We also figured that most groups headed for the east end had passed the burn, so there might not be a campsite for us farther east. The site had not been used much as it was a bit overgrown but was fine for just the two of us. The site we stayed at was on the north shore just west of a little portage/shortcut where you could jump into the North arm of Knife.

We got camp setup but were now paranoid of another bear encounter. Thinking back on it now our fears were pretty unfounded but it was difficult at the time to keep from constantly thinking about it. Neither of us slept well that night and the rest of the trip was a bit overshadowed by our bear run in. We kept a spotless camp, did not cook fish for much of the rest of the trip for not wanting to cause an appetizing whiff for nearby marauders to key in on. When we went fishing and stopped along shore or at empty campsites to take breaks or use the latrines, constant thoughts of bears were in the back of our minds. 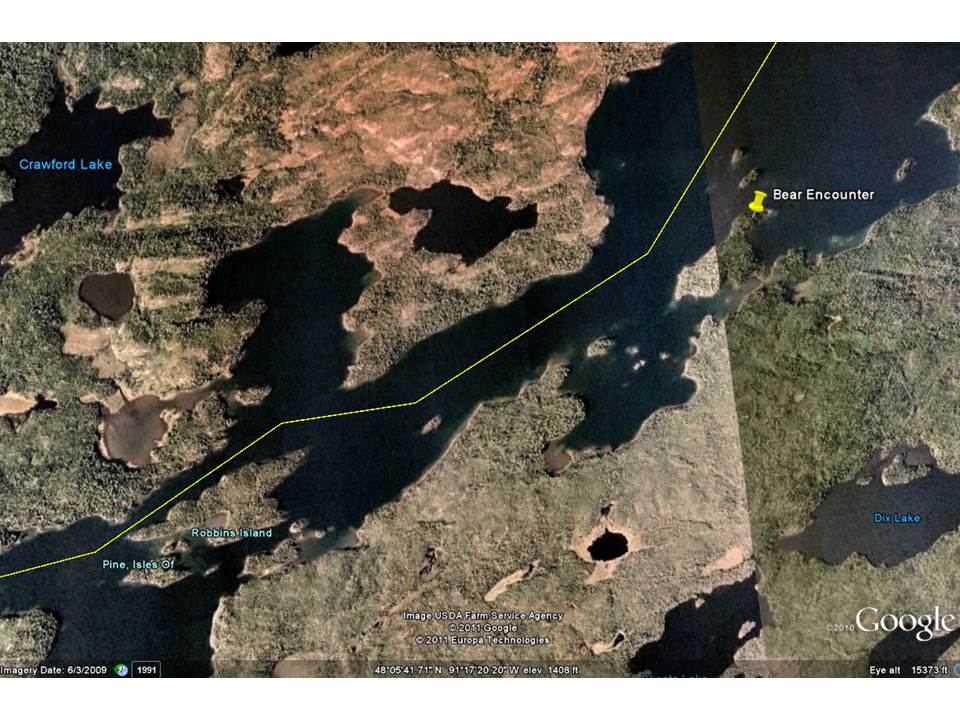