Trip Type: Paddling Canoe
Entry Date: 07/10/2011
Entry & Exit Point: Lizz and Swamp Lakes (EP 47)
Number of Days: 6
Group Size: 1
Discuss Trip: View Discussion Thread (8 messages)
Day 2 of 6
Sunday, July 10, 2011
Poplar Lake, Lizz Lake, Caribou Lake, Horseshoe Lake, Allen Lake, Pillsbery Lake, Henson Lake, Omega Lake
I woke up in the van at about 5:00 excited to get out on the water and start my journey. The van floor was quite comfortable and I would have slept pretty good except a few annoying mosquitoes kept buzzing my ears during the night. Drove the van from the upper lot down to the lake boat ramp and got everything loaded up in the canoe. It was foggy and muggy and you could already feel the heat of the day coming on. The fog would cause some havok on my "get going early" plans. I pushed off from the boat landing and me and my (actually borrowed) Old Towne Pack were off.
I ran into problems right away. It was hard to pick out shore line features and islands because of the fog. The fog and mugginess were also steaming my glasses up about every 30 seconds which made map reading very difficult. These problems coupled with the fact that I had envisioned Poplar Lake as being larger than it actaully was, caused me to get lost. The portage to Lizz Lake is about half way across Poplar Lake. Without knowing it, I had gone almost all the way across Poplar before I knew I was defiantly off course. I knew most of the time that stuff wasn't making sense, but I buried that thought deep down. My ego wouldn't let me believe that I was lost on the first lake of my trip, and technically not even in the Boundary Waters yet! After going around some islands a few times, paddling into dead-end bays that "surely must be islands" I finally realized where I was. All said and done, it took me 2 hours to paddle Poplar Lake and it should have taken about 30 minutes.
I made it to the Lizz Lake portage and met about 2 groups going in the opposite direction. Crossed Lizz and met a couple of more groups heading the opposite direction as me. I think that there was some pretty heavy rain and thunderstorms the day or two before my trip. The portage trails were muddy and full of mosquitoes. I think this is also why I ran into so many groups heading out on my way in. The rest of the day I made my way through Caribou Lake, Horseshoe Lake, Allen Lake, Pillsbery Lake, Henson Lake and finally made it to Omega Lake. These are all long skinny lakes that run East- West. The wind likes to funnel down the length of them and pick up speed. Of course the whole trip, the wind was in my face...but that goes without saying. I arrived at Omega at about 12:30pm. My goal was to get the campsite on the point that is about half way across the lake and basecamp there the rest of my trip. The spot was open and I set up camp. True to the reviews of BWCA.com it was a 4-5 star camp site. The only thing it lacked was a good boat landing. I put up the tent unpacked a few things and then hit the tent floor for a nap. My back and shoulders were sore from fighting the wind all day. I used a double bladed paddle and this worked a little different set up muscles than usual also. After my nap, I had supper and then went trolling around the lake. The wind was gone completely and the lake was like glass. This was the only time on the trip that this happened!!!
It was kind of funny, I was trying Fireline out for the 1st time convinced I wouldn't have to use leaders for those pesky toothed critters ( Note: I am not much of a fisherman, but enjoy trying). The first fish I caught on my brand new fireline, bit me off right at the boat. Most of it was my fault, I was not really prepared yet and while the fish was on I was farting around trying to untangle my net and pliers. Had I been ready, I would have had him in the boat long before he cut me off. I tied on a leader and continued on. I caught about 10 northerns in a hour. None with any size though. I headed back to camp and called it a night.
LESSON OF THE DAY: If land marks and your maps aren't making sense...STOP and figure out why. 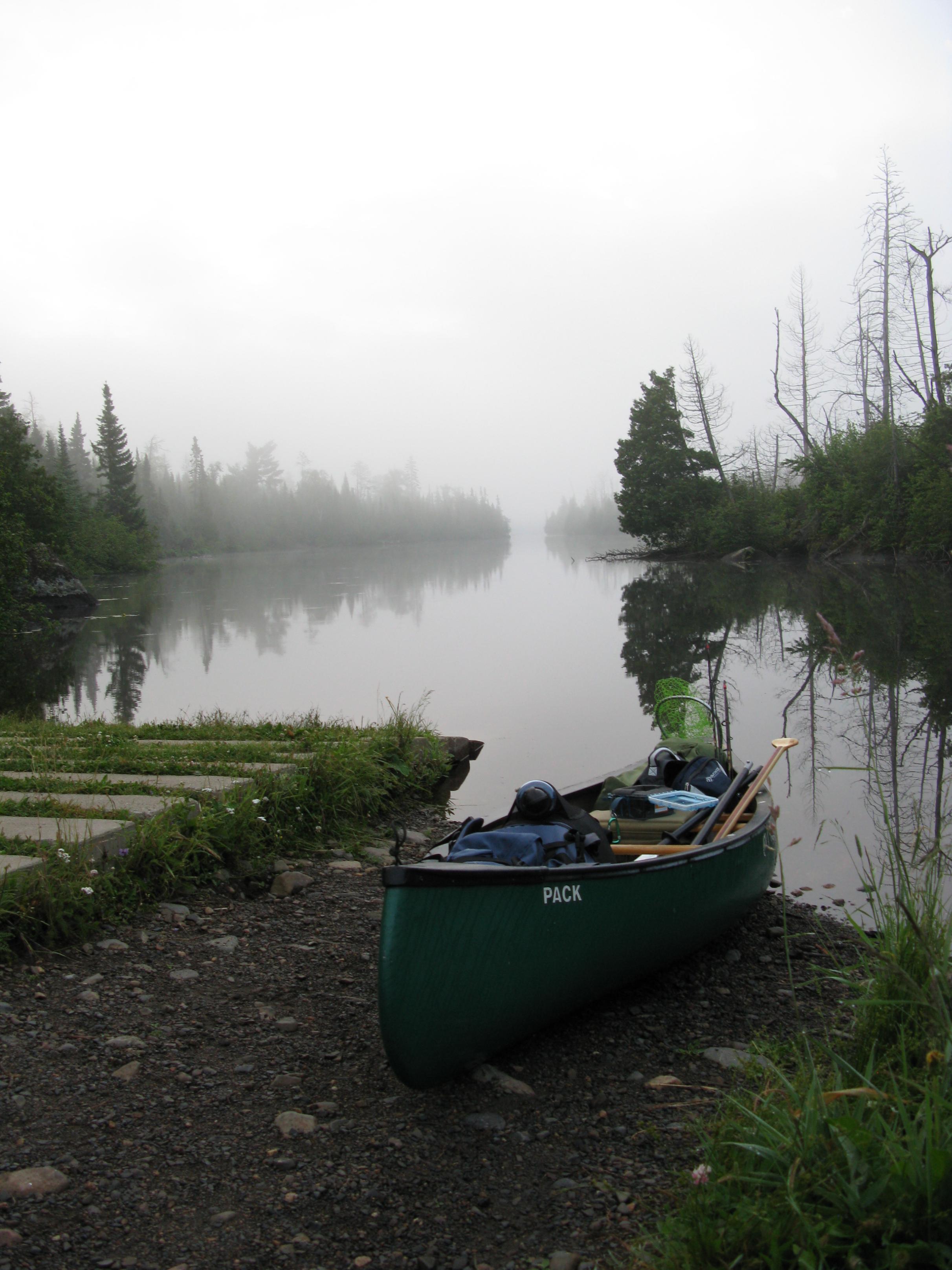 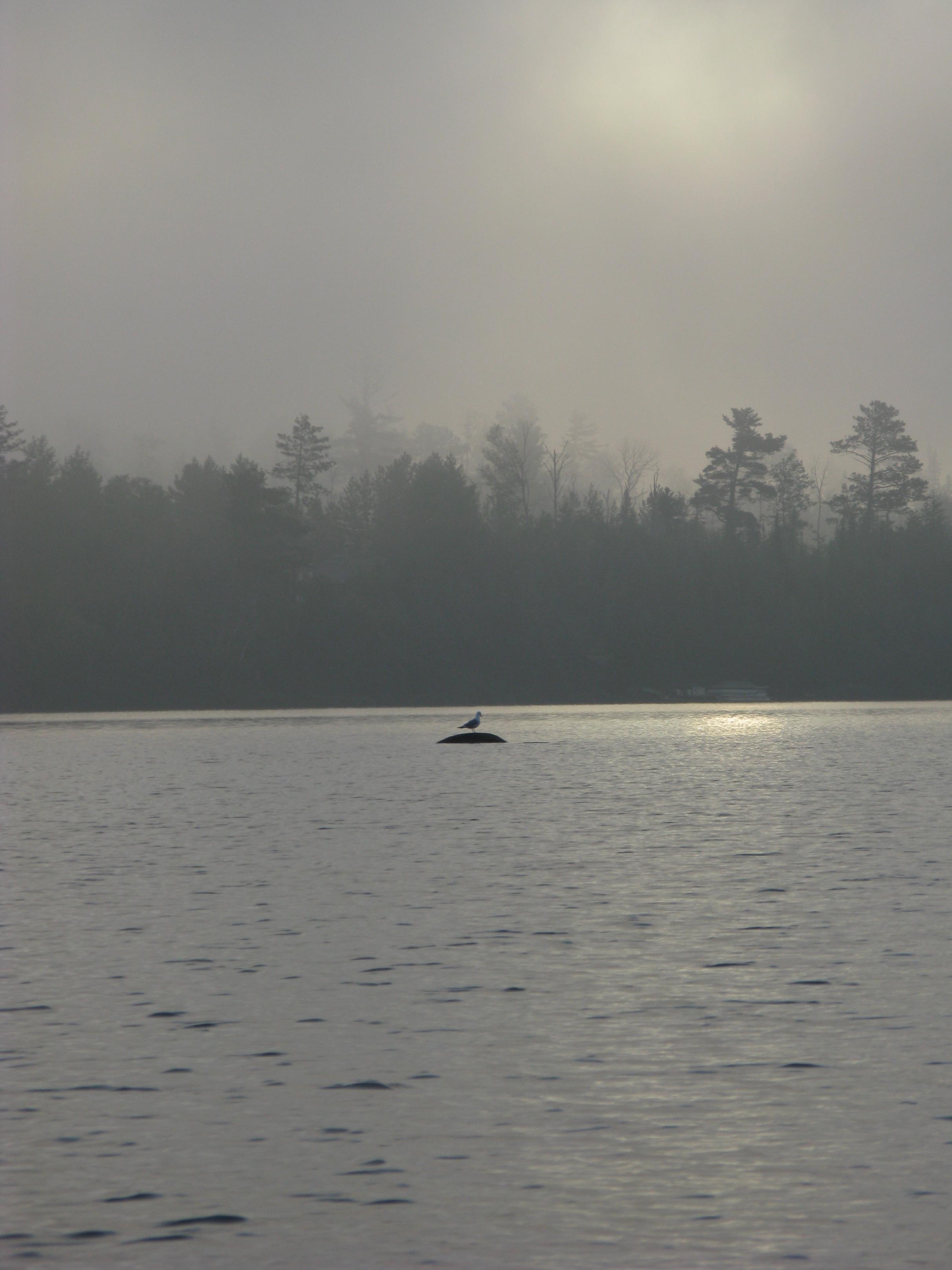 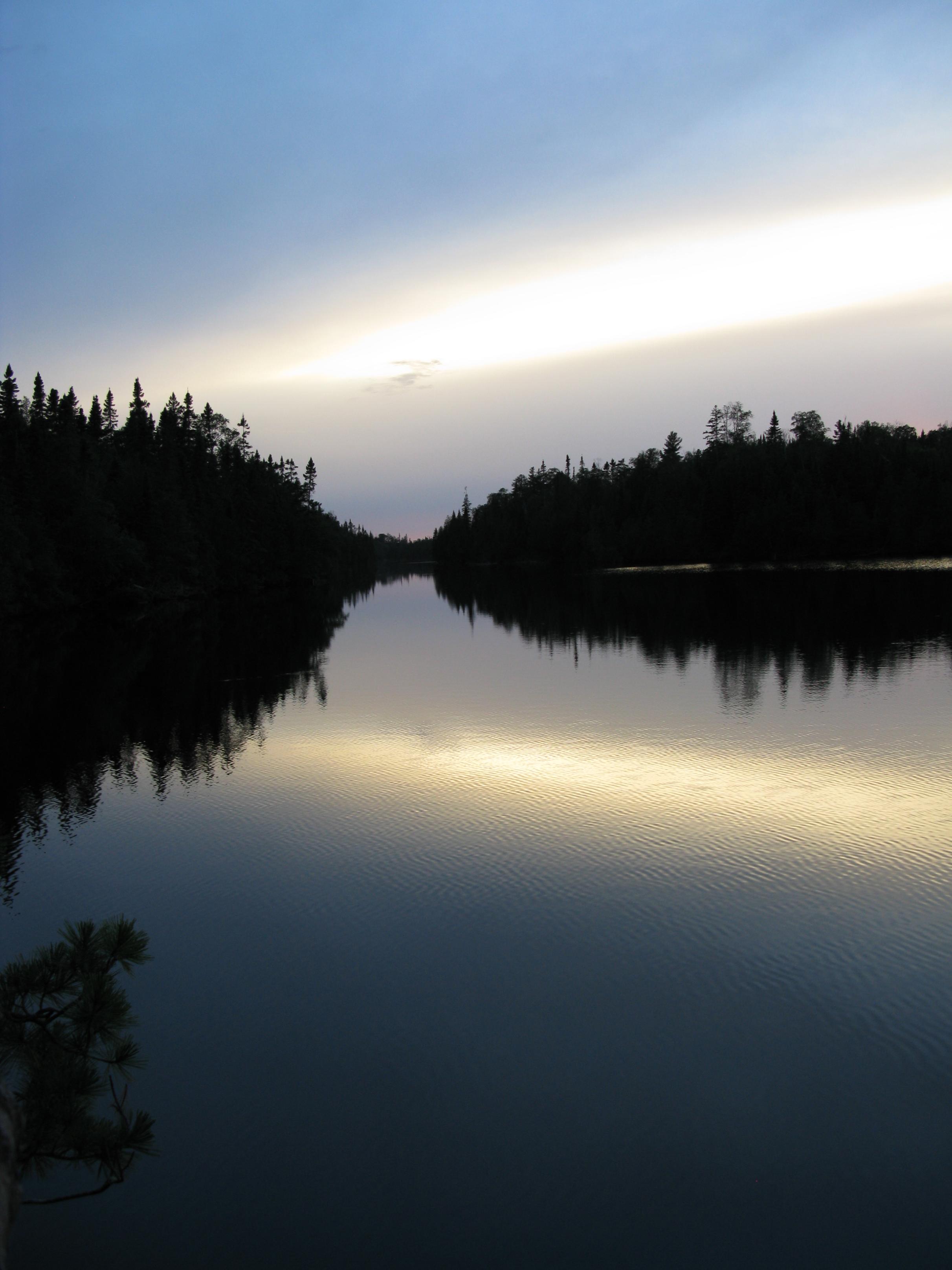