Trip Type: Paddling Canoe
Entry Date: 09/26/2007
Entry Point: Ram Lake (EP 44)
Exit Point: Bower Trout Lake (EP 43)
Number of Days: 5
Group Size: 2
Trip Introduction:
The summer of 2007 was quite dry. That all changed in September. A Co-worker had taken a trip a couple of weeks before ours and reported getting 8 inches of rain in one night which caused the their lake levels to rise 1 1/2 feet overnight. The portages reflected the wetter conditions.
Discuss Trip: View Discussion Thread (1 messages)
Day 1 of 5
Wednesday, September 26, 2007 Wednesday Day 1 Lakes (Ram, Kroft, Rum, Little Trout Lake) The trip to Entry Point 44

We started early in the morning. Joel was at Chris’s house in Minneapolis at 6:30 am and were on the road by 7. We had a nice ride up to Duluth. For the first time we stopped and did some shopping on the way. The weather reports were for some rain over the weekend and there had been a lot of rain the week before we went up. This raised concerns about how much water we were going to encounter (on the portages, yes, I realize that we're on a canoe trip crossing lakes filled with the wet stuff) and the footwear that we might need. We both were wearing low cut hiking shoes.

A stop at Gander Mountain in Duluth was in order. Arriving around 9:30 we headed to the boots section. They have a lot of boots. We tried most of them on…. Twice….. at least. Grams of Thinsulate, lace types (eyelet vs. hooks), boot height/ weight, height of tongue connection, boot color, tread type, comfort levels with thin socks and thick socks, these phrases pepper our conversation. 10:00… Joel decided not to buy anything and concentrated on pulling a variety of models for Chris. Chris was leaning towards a warmer boot with a soft comfy sole. 10:30… Joel was back trying on boots, moving his inserts from boot to boot. Chris was wandering around with a boot on one foot and three pairs of socks on the other foot. If he didn't get an insulated boot, he didn't want cold feet, thus any serious candidate had to pass the multiple sock test. 10:45… Joel couldn't find anything that felt right, back to pulling samples for Chris. Chris was on the floor surrounded by a dozen boxes, a different boot on each foot, while he examined a third boot for flexibility. While the store staff wasn’t' badgering us to buy anything, one safety conscious employee set up a perimeter of orange cones warning of trip hazards. 11:00 Joel is methodically trying to match the losers of the boot lottery to the boxes from which they came. Chris is on is third final decision. Uh-oh, Joel spies a couple of intriguing possibilities and begins trying on boots again. The orange cone perimeter has been expanded cutting off a main traffic isle. Two employees don blaze orange vests (borrowed from the hunting area) and begin diverting traffic. 11:15… We've narrowed our choices down to something from the right side of the store, but found a new clearance rack. Progress? It's a push. 11:30… The floors have cleared, traffic patterns have returned to normal. We've made our choices. We tenderly carry our merchandise to the register prodded on by a cheering throng of employees and customers. It's a scene similar to that found at the end of marathons, exhausted but happy looks on faces. A life's goal has been accomplished.

Basking in the glow of our achievement, we head up the road to Grand Marais. Sign says only 100 miles to go. Two hours later we make a quick stop at the ranger station for our permit and Dairy Queen for a burger. On to the Gunflint Trail. Let the picture taking begin.

Once every trip we test our navigational skills by taking an unplanned detour. We've never actually gotten lost, but we have had to re-paddle a stretch or two. Usually this occurs while paddling, today it occurs while driving. Let's just say that there weren't any large signs marking the road for our turn. A sign saying "Joel and Chris Turn here NOW!!!" would have been nice. Taking the round about way there and back again, we find our entry point "parking lot" around 2:30. There was another vehicle in the lot painted with a camouflage pattern. We unloaded the car as an older couple arrives to go fishing on Ram Lake.  With our new boots on and our clean faces smiling, we head down the portage for the first time. I'm the last one at the truck, time check is 3:00. Depending on how fast things go, we may be adjusting our targeted camping site.

The paddle was rather uneventful across the first couple of lakes. I don't remember any of the portages being very difficult either. Relatively short, a bit more hilly than in the past, with wet squishy paths to test our new boots. A recurring theme for this trip.

We decide to stay on Little Trout Lake,  two portages and a Lake short of our planned destination on Vista Lake. Oh well at least our feet will be dry on this trip. One of the portages is listed at 200 rods and we'd rather make camp while the sun is still up. The island site that we first wanted to check on is occupied. The occupation is not easily seen however. This must be the owner of the camo car. What appears to be a floating coffee cup is actually a coffee cup held by a man in full camo. He is a bit difficult to pick out as he sits back in the trees observing his surroundings. His camo tent and camo painted solo canoe are hard to spot as well. We'd meet him on Thursday again while out on the water. He was much easier to see when he was on the lake.

We head across the lake to the camp site closest to the portage that will initiate our travels on Thursday. The campsite is small little spot nestled at the base of a good sized hill. It's a nice shaded spot, with rather small tent sites, the best one being only 10 or so feet from the fire pit. We begin to set up camp. Each of us doing "our chores" falling into what is becoming an unspoken routine. We set the tent first as a team. Then Chris works industriously setting up the tarp and begins the process of gathering firewood. Imagine a beaver on amphetamines and you'll begin to appreciate the size of the wood pile typically generated by Mr. Olson. Let's just say we've never run out of firewood. Joel pretends to look busy preparing the meal. It's chili, heat and eat, how hard can that be. Mostly Joel tries not to hyperventilate breathing in the fresh pine scented air with huge lung filling drafts. Life is good. The lake is quiet and Chris runs out of chores. So Joel turns up the heat on the chili and serves supper. We enjoy a nice fire and read a bit from one of the books Joel brought along. 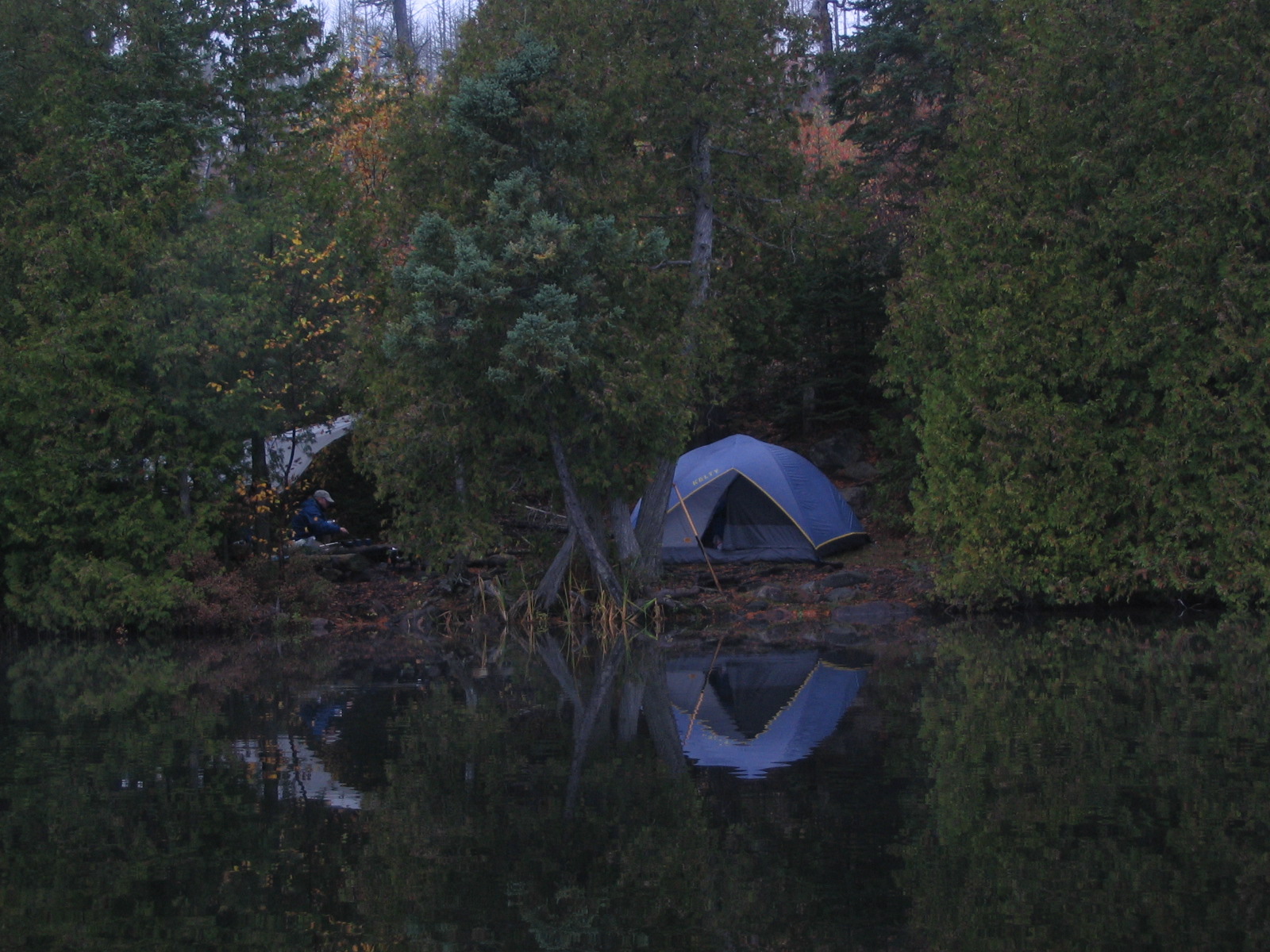 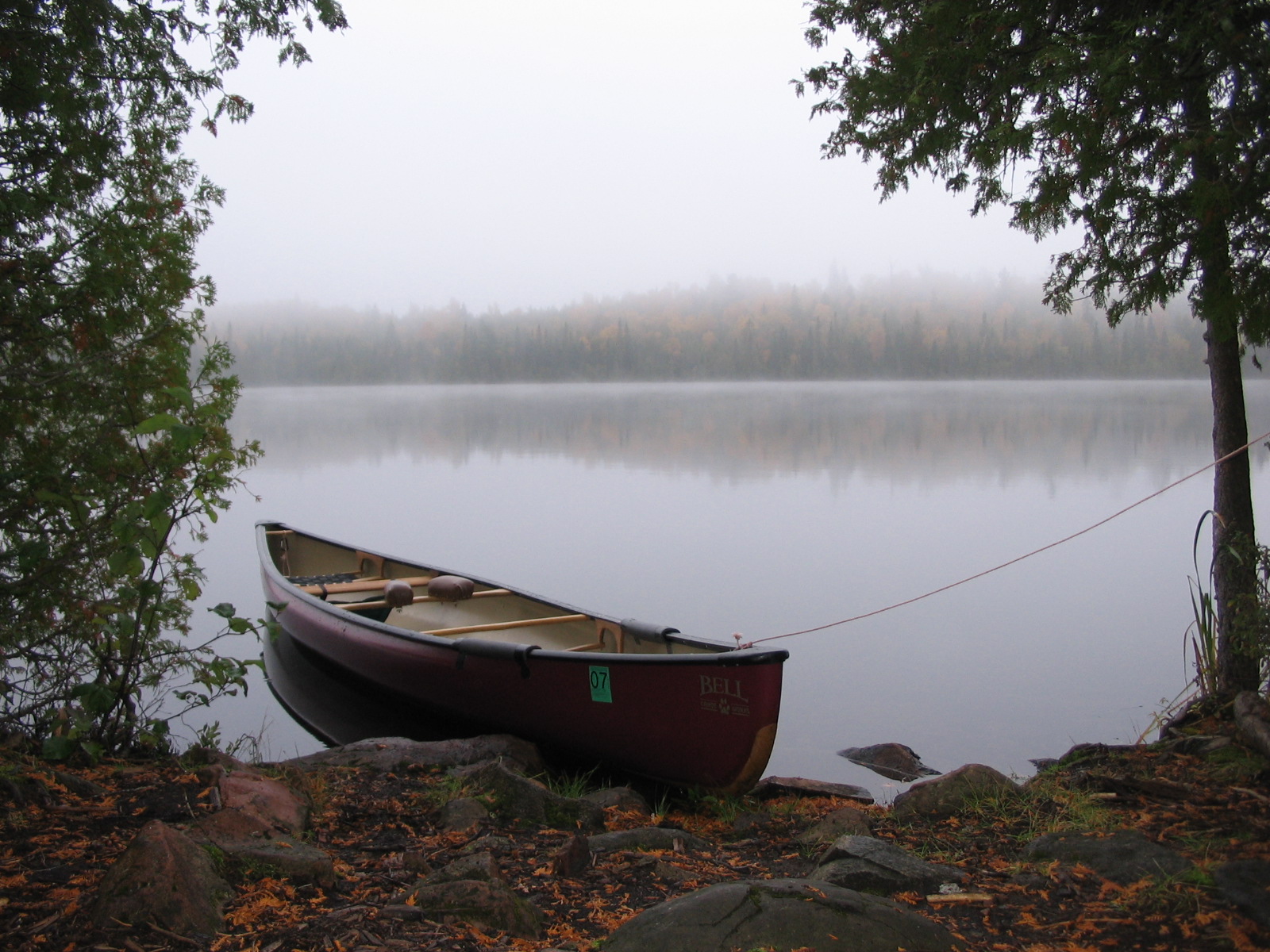