Trip Type: Paddling Canoe
Entry Date: 07/31/2011
Entry Point: Little Gabbro Lake (EP 33)
Exit Point: Farm Lake (EP 31)
Number of Days: 5
Group Size: 7
Trip Introduction:
Three 17 year-old young women, their mothers, a grandmother and a dog out to enjoy a backcountry experience.
Discuss Trip: View Discussion Thread (13 messages)
Day 1 of 5
Sunday, July 31, 2011
Little Gabbro Lake, Gabbro Lake, Bald Eagle Lake, Turtle Lake, Clearwater Lake
The day before we drove up to Ely from Madison, Wisconsin, arriving at the outfitter with plenty of time to check-in and relax. North Country Canoe Outfitters treated us like royalty even though we were just renting canoes and a couple Duluth packs from them. John, a fountain of valuable information about the area, met with our group and marked on our map good campsites and things to watch out for. After a nice dinner in Ely, we enjoyed a good night sleep in the bunkhouse.
We woke up early at the outfitters, enjoyed a continental breakfast, loaded our gear in Duluth packs and then into the van. Jeff drove us to the start of the first portage at Little Gabbro Lake. This super guy carried the three person canoe and one pack over the 200 rod portage for us. He even stuck around to take a group photo before we set off.
As we set out, it took a little bit of paddling to orient ourselves with the map and landmarks, Amani proving to be a master map reader. Then it was smooth paddling to a quiet site for a lunch break. We took our second portage around some rapids between Gabbro and Bald Eagle. We chose the east side of the rapids which was pretty rocky but very short, just a few rods. As we loaded the boats, we noticed another group coming out going west of the rapids which we vowed to do on the return trip. 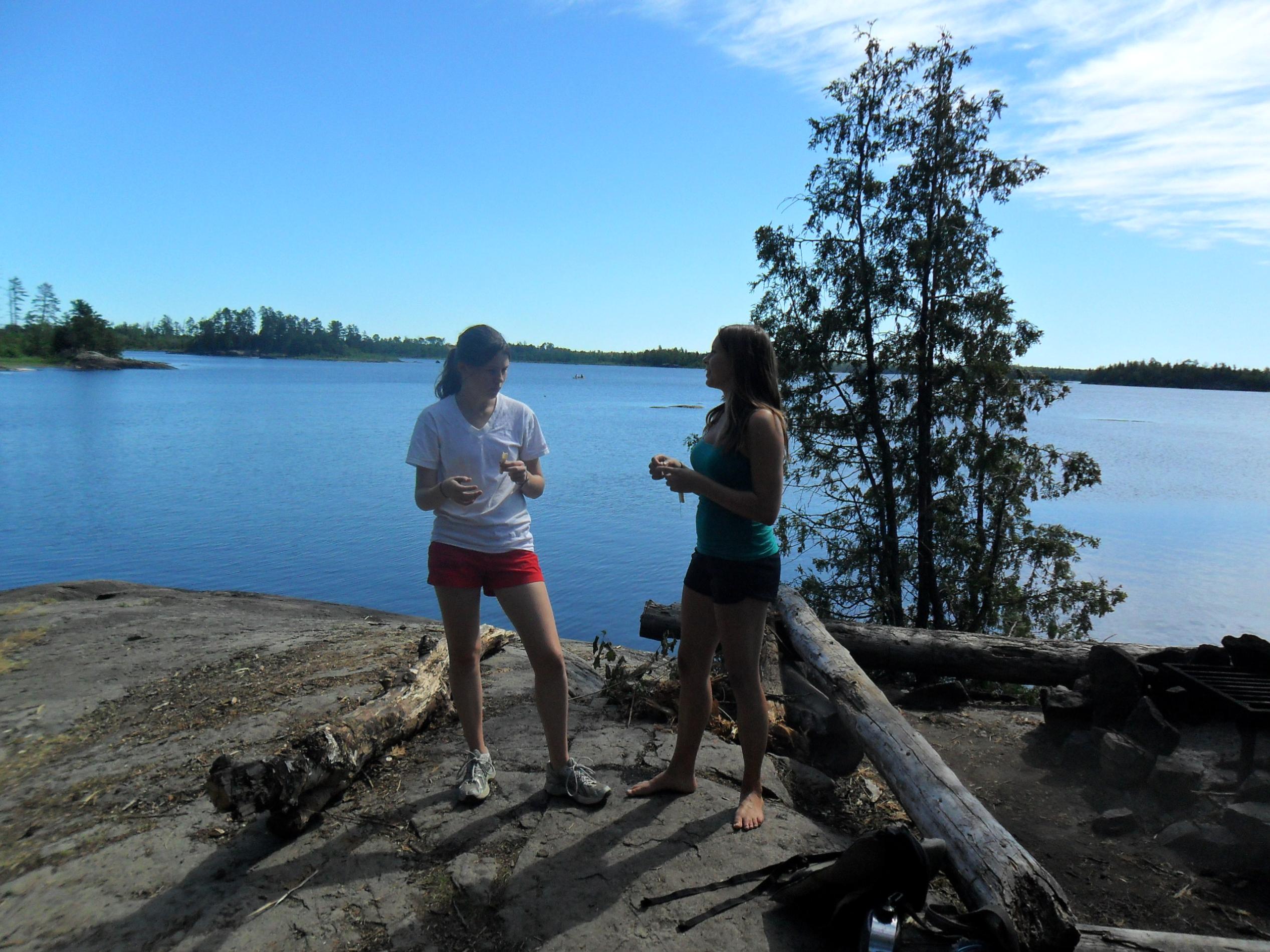 A short paddle across the tip of Bald Eagle to the next portage over to Turtle Lake, 186 rods. Still new at the whole portage thing, the group did a lot of standing around waiting to get organized. We double portaged since there were 7 heavy packs and 3 canoes. The reason for "pack light" in discussions before the trip quickly came to mind and we vowed to eat a lot in the next few days to make our trip out easier. Luna, our dog led the way across the portages, running back and forth between people. Gotta love a herding dog.
After a short break on Turtle Lake, the group decided to press on to Clearwater Lake and enjoy three nights in one campsite instead of spending one night on Turtle Lake and two on Clearwater.
During the long 214 rod portage to Clearwater Lake, we were questioning the decision. But once we arrived and settled in at campsite #2, we knew we had made a good choice. For the three nights we stayed there, we were the only campers on the whole lake. What a treat!
After a delicious meal of Jambalaya and sausage, we made a bear hang (thanks to Colleen's stellar knot tying abilities) and tucked in for the night. 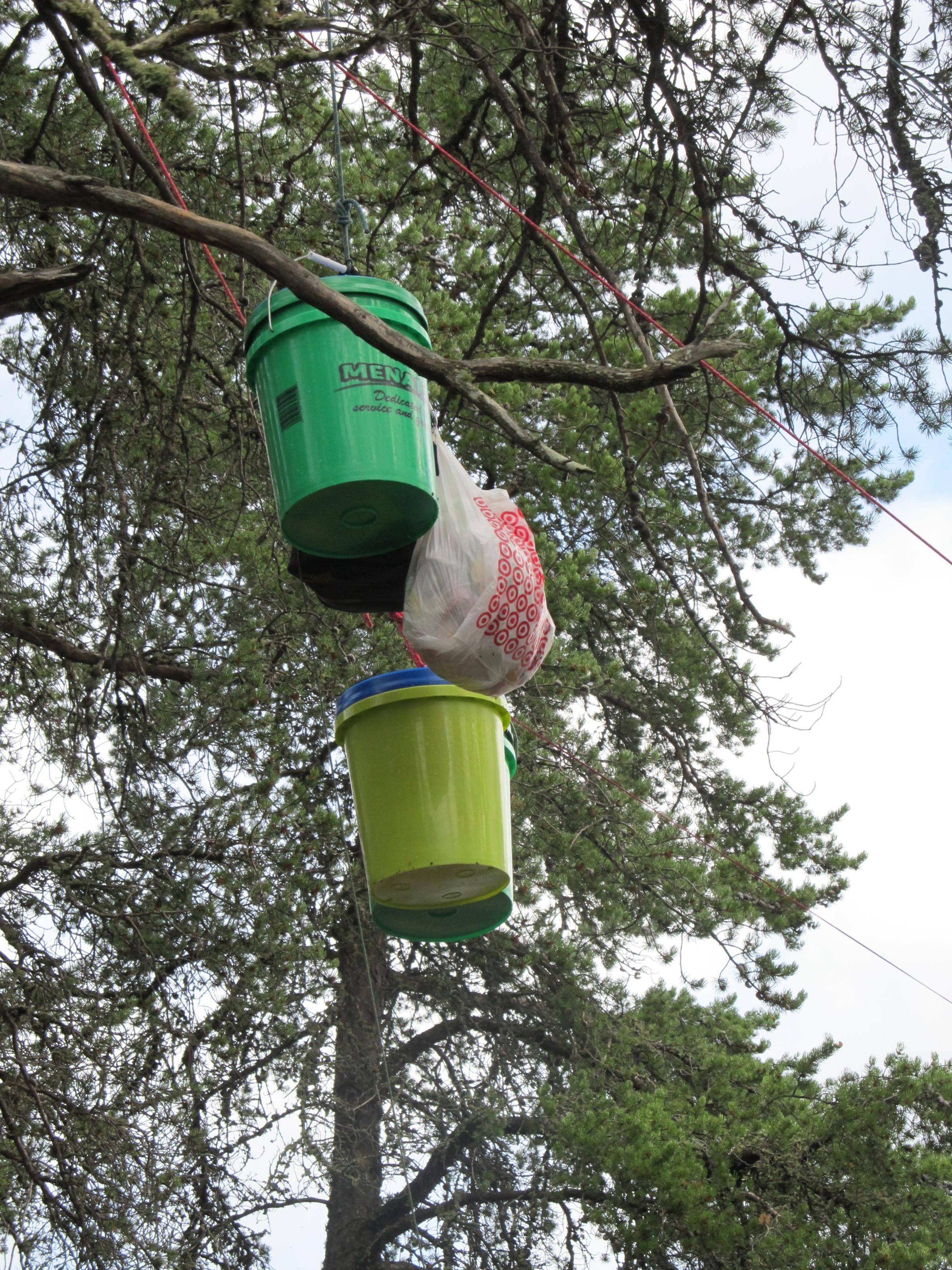