Lake One with the bag Family
by floatstanley

Trip Type: Paddling Canoe
Entry Date: 08/09/2011
Entry & Exit Point: Lake One (EP 30)
Number of Days: 4
Group Size: 5
Trip Introduction:
After a long week with Kendra and the 3 B’s, and a few days R&R at VNO, I was anxiously awaiting the arrival of my next foster-trippers. The 3 B’s had given me the important job of delivering a birthday present to their 2-year-old Cousin Pillow-2 who would be making his first trip to the BWCA. I was so excited! Finally I could show off some of my tripping skills to a newbie. Also being my next family was related to Kendra, I was sure to have as much of a blast as I do when I’m with them, right?
Discuss Trip: View Discussion Thread (9 messages)
Report
…well, after getting picked up at VNO by Sleepnbag, Pad & Pillows 1 & 2, I was quickly thrown in back of the SUV after getting the present ripped from my buckles. “COOL!” They shouted as they oohed and awed over the kids water bottle and Boundary Waters T-shirt that was wrapped up in a BW bandana with ends affixed using Bungie-Dealie-Bobs like a piece of candy. Not even so much as a “Hello Stan”.
I ended up spending the night in a parking lot outside the Adventure Inn. Earlier in the evening I thought Pad and Pillow-1 were coming out to get me, but it turned out they were going to the ER to get some eye drops because someone had Pink Eye! “Oh Great” I thought, “That’s all I need is to catch something before the trip.”
The next morning we headed off to Lake One. After being tossed around a few times I finally landed in the canoe. “YES!” I thought, “Today will be better, we just need to get to know each other a little better that’s all.” After a couple hours of paddling and having a few sites to choose from, we ended up on a nice island site on… “Lake One?” Huh? I was thinking to myself there’s plenty of daylight? Why are we stopping already? We could have easily made it to Lake Three? What gives? Next thing I know I was thrown out onto shore and packs came down on top of me squishing my inter foam. There I lay under a pile of gear. It had rained a bit in the morning, but now the sun was out and I was hot and almost suffocated. After a while as the weight got a bit lighter, I was then picked up and carried up to camp. “Hello everybody!” I shouted, but they did not respond. I was then placed in the back vestibule of the tent, and with the sound of a zipper, I was “Stored”. 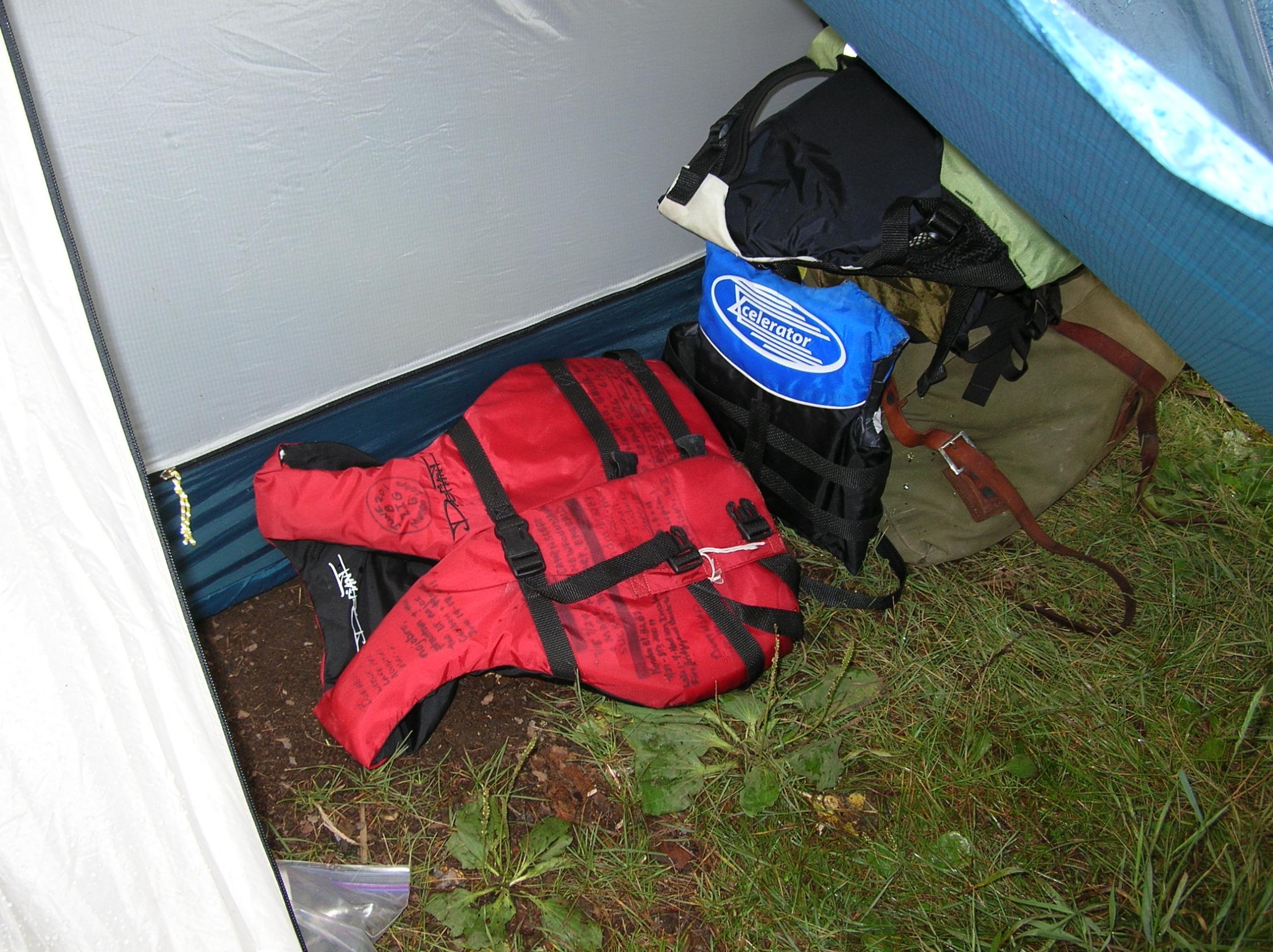 “What?” It’s not night time yet? This must be some kind of mistake. But it wasn’t. I was there the rest of the day.
The next morning I decided that it was going to be up to me to make friends, so I slid out from under the vestibule and looked around. I spotted some firewood that needed to be cut up. Hey, if I help out with camp chores that will surly win them over. 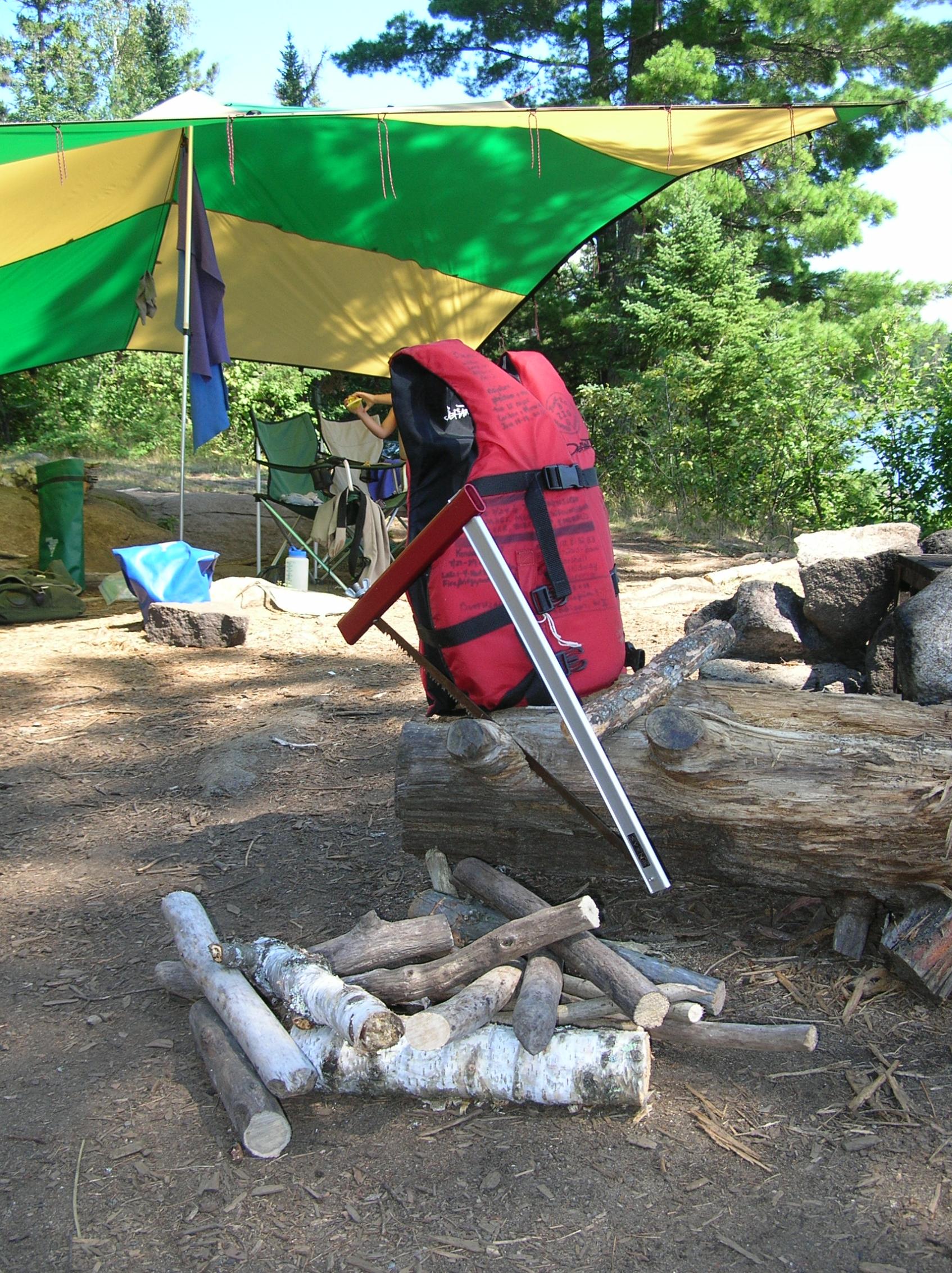 Well, with the heat of the day and all that cutting and stacking, I soon felt a little dizzy and don’t really remember anything after that. 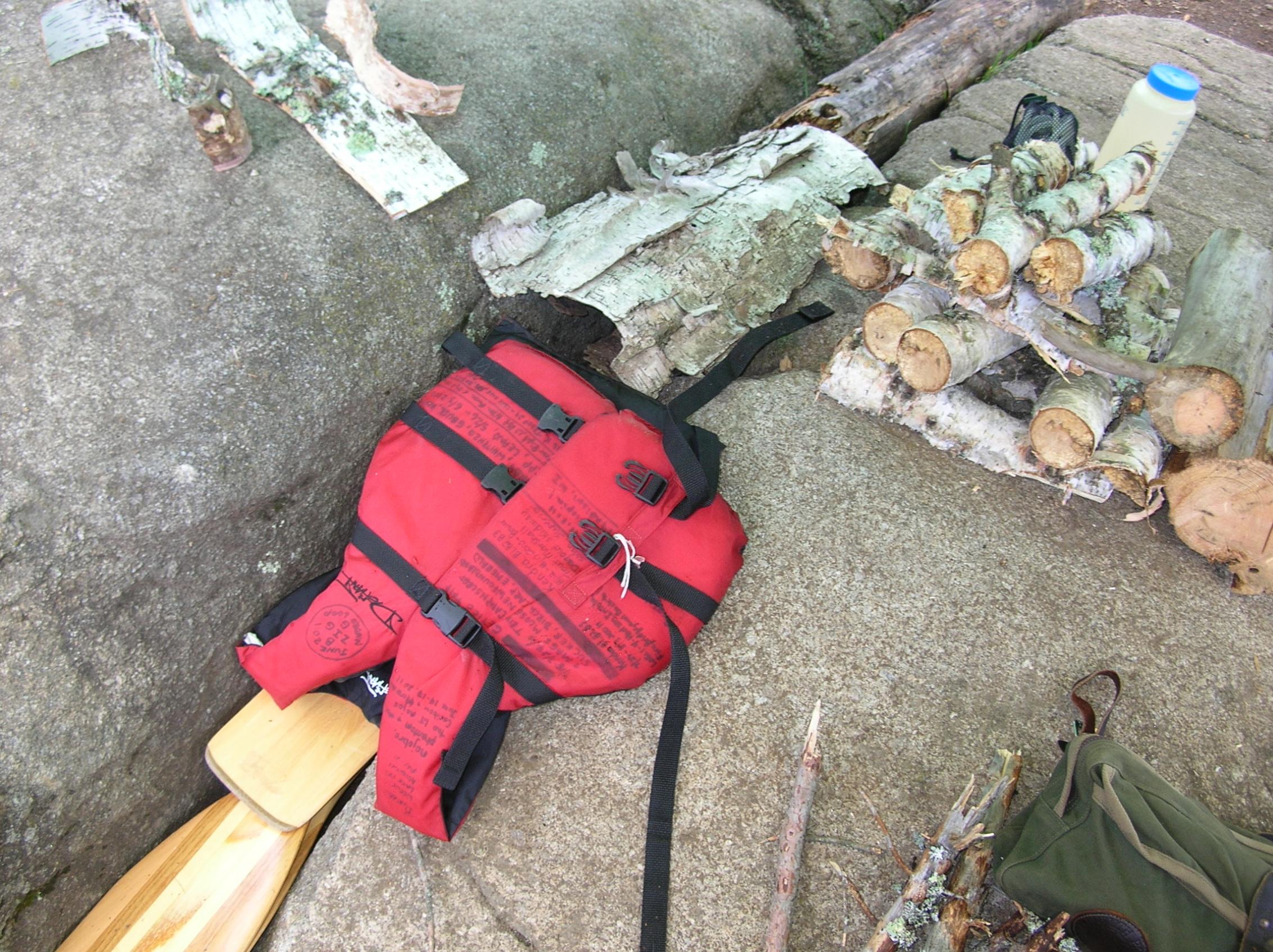 I slowly awoke, my vision blurry at first but then it got better. I looked around, the family was gone! I must have passed out - I ran down to the water only to see the family paddling away on a daytrip. All I could do is sit on a rock and cry. 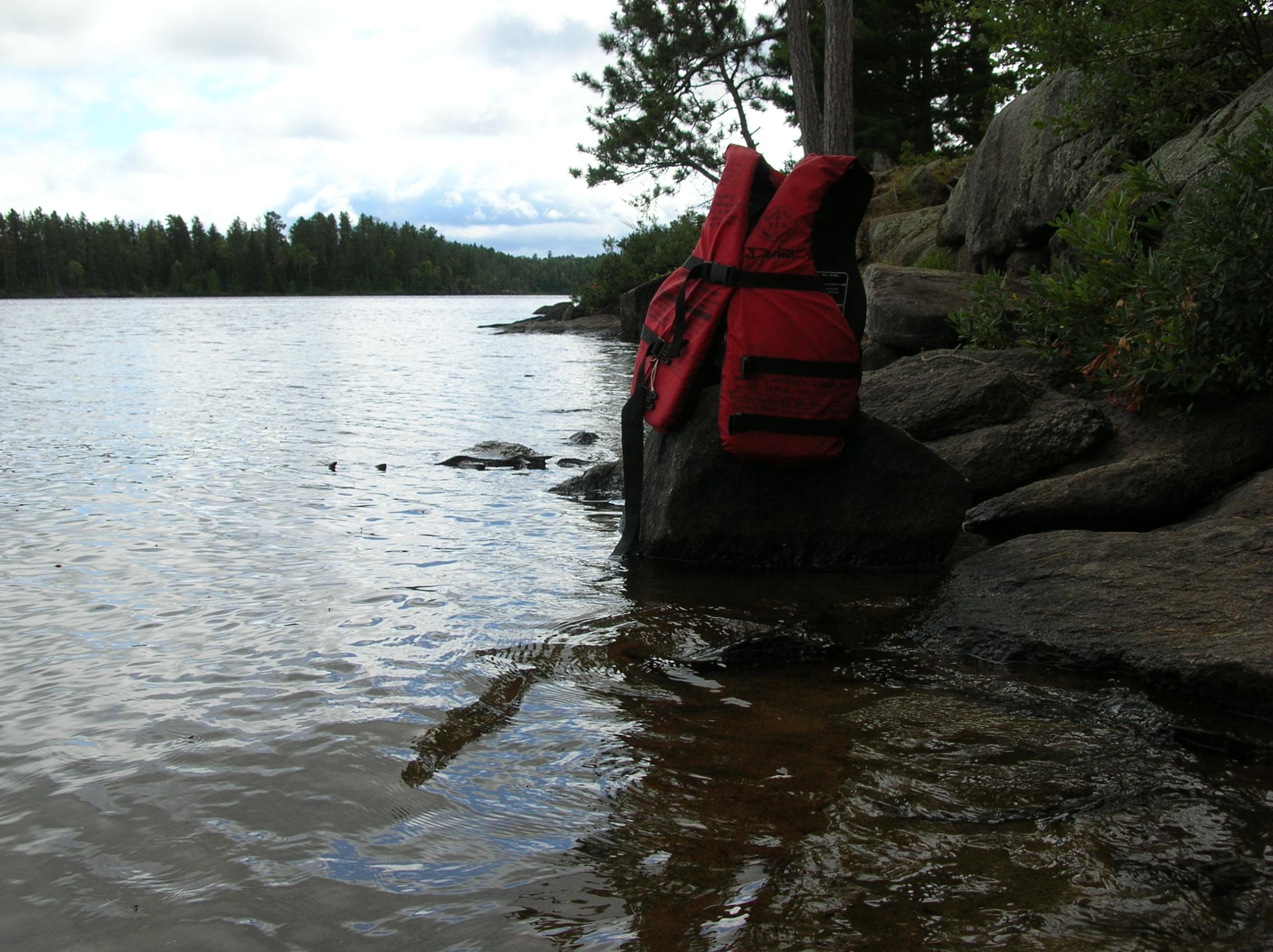 When the family returned, they tossed me up on shore and went about their business. Later that day it started to rain. They all scrambled around putting everything under the CCS tarp. (Well everything except me of course). 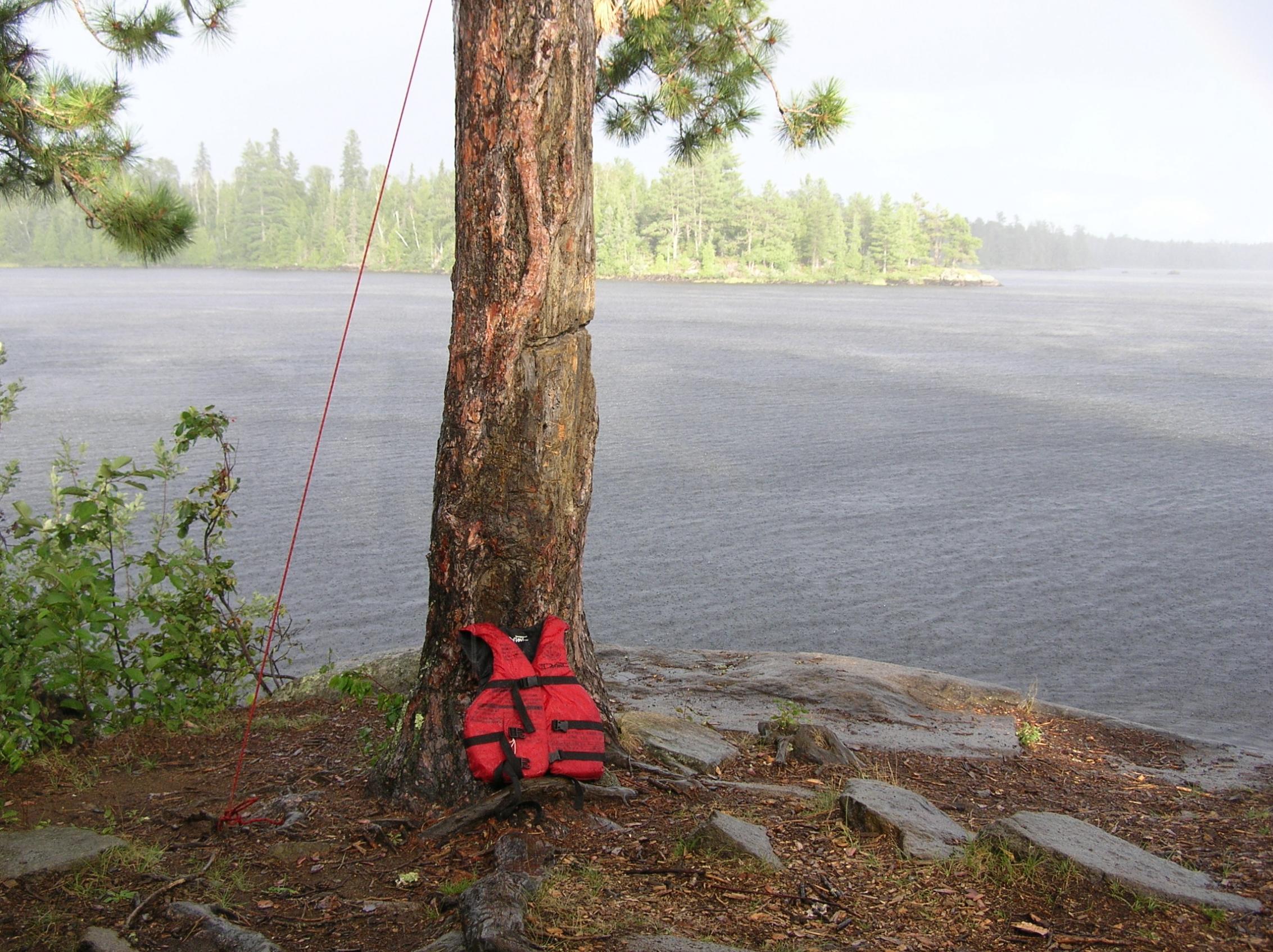 The rest of the trip was no different. All I could do is watch as the kids fished, swam and enjoyed the nice weather. 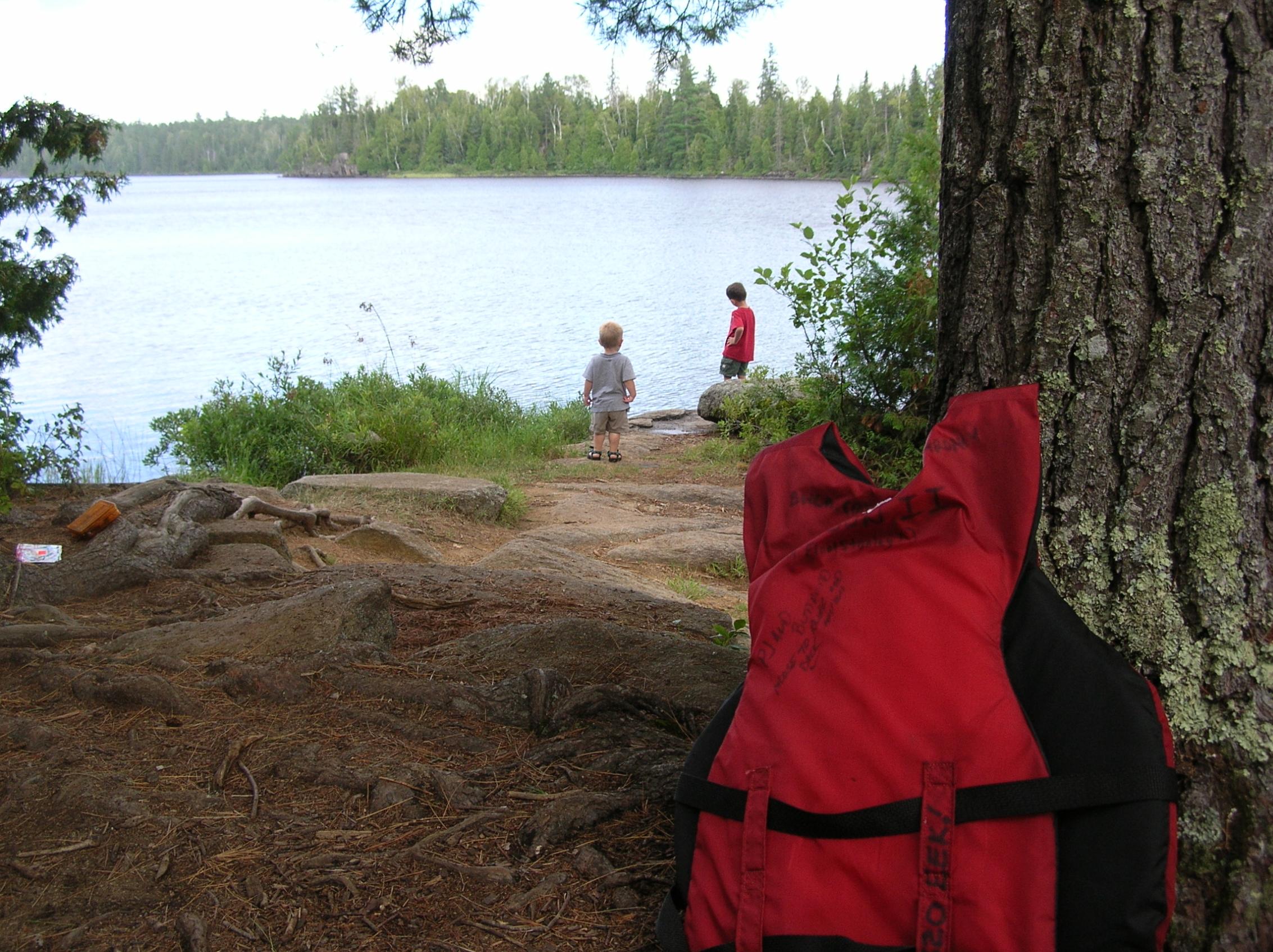 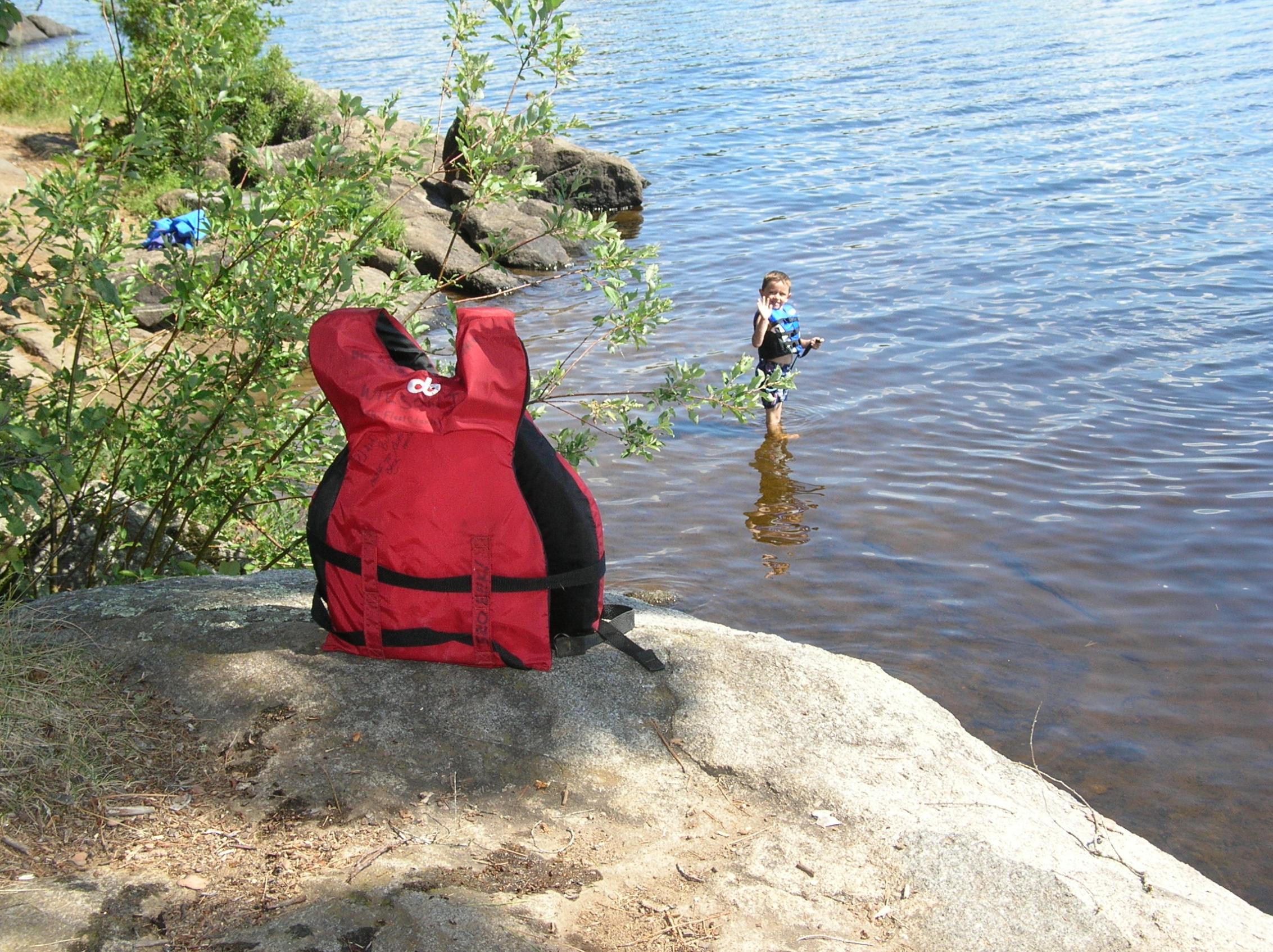 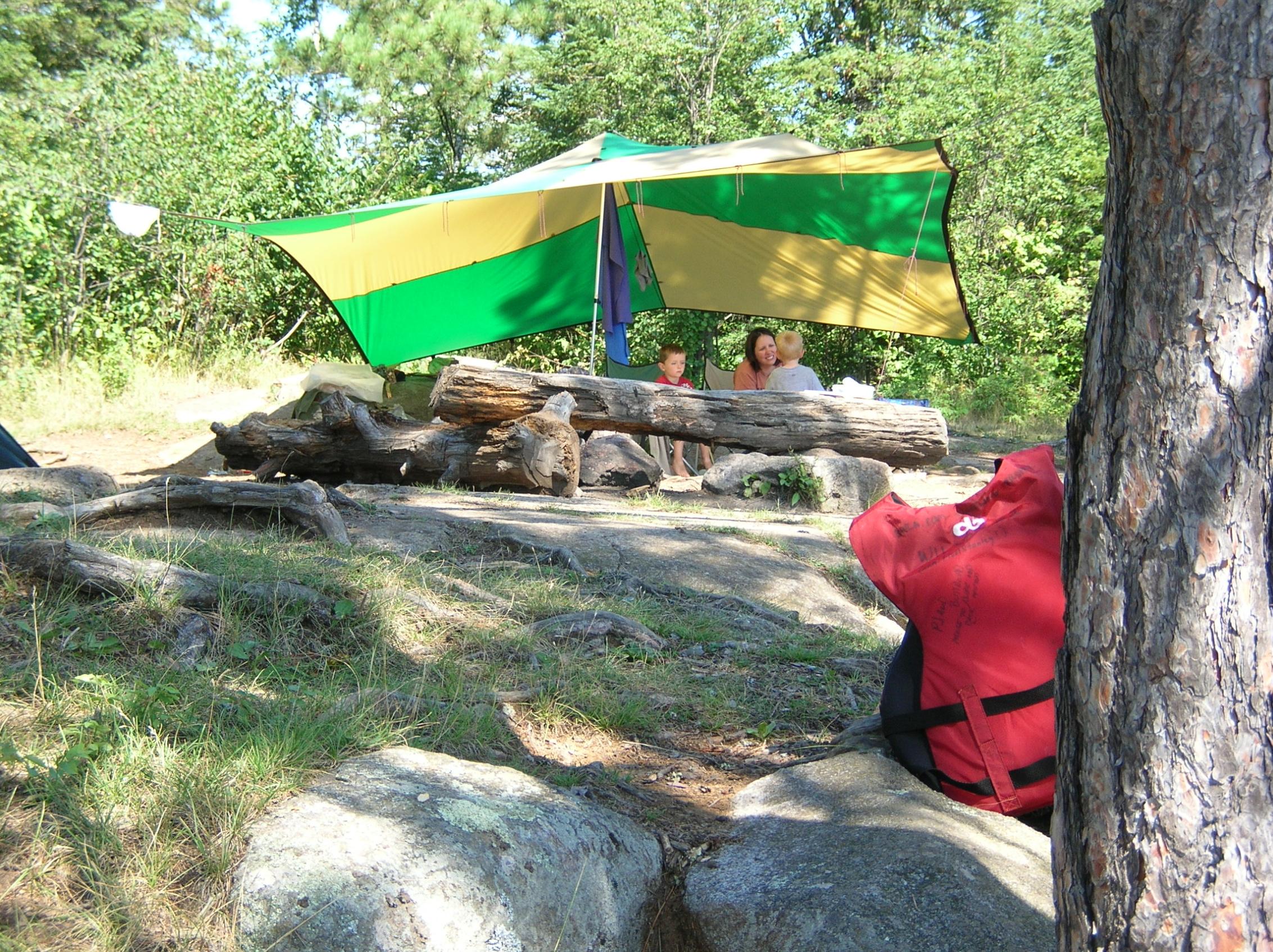 I did manage to “sneak” into one of there family pictures though, so at least they will have something to remember me by. (I’m sure they could really care less though) 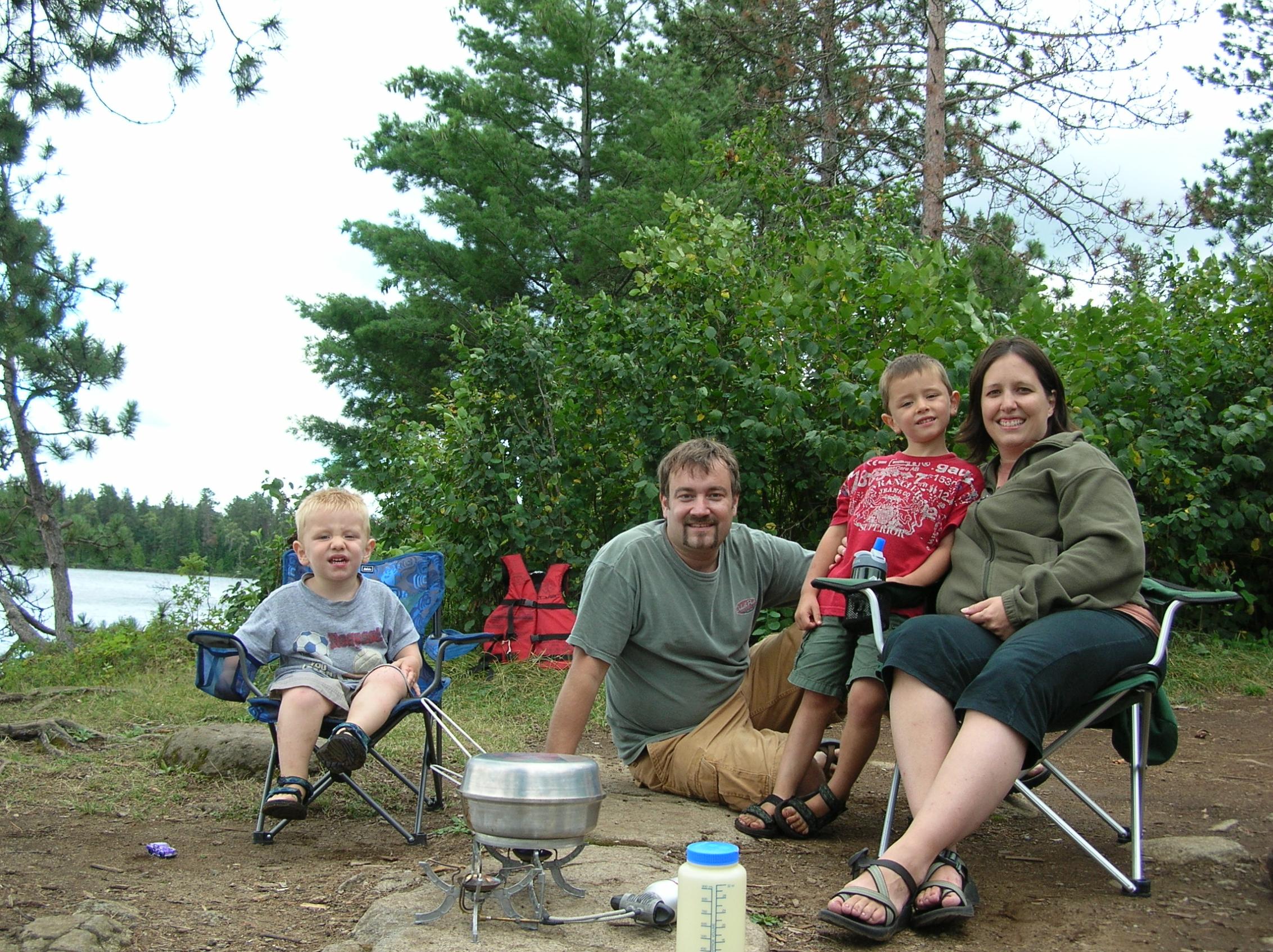 The last day, the family packed up, threw me in the canoe and headed for the car. I ended up riding in back again (Next to a pack of dirty diapers) back to VNO where I await my next foster trippers. Hopefully they won’t treat me as bad as I was treated by this family of tent accessories.
Back to Trip Report Main Menu